I have spent some more time working on the Placenoit scenario from the rulebook. I continued to go with a 8'x5' terrain, and have used the ground scale as suggested by the rulebook of 1"=50yd(m). It is impossible of course to get Placenoit itself to scale, but that is one thing I have accepted long ago. None of the reserves (French Guard and Prussian 13,5 Bde), are set up on the terrain to start. I placed the units as they were at 4:30pm at the start of the battle according to Adkin. 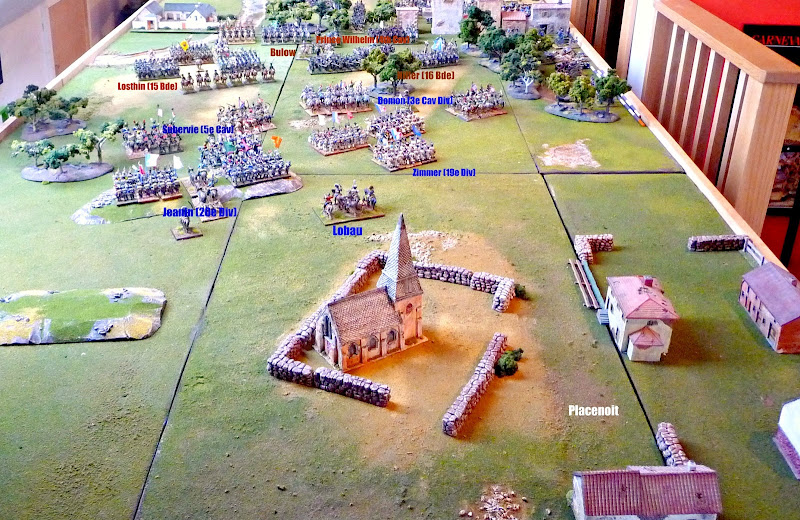 I use 40x40 mm bases with 28mm figures. I use 6 and 8 bases respectively for small and large units, so the large units have a slightly smaller width then recommended in the rule book. There are plenty of examples in the post of the different formations as allowed by the rules, including the self supported tactical formation allowed to large units (I added a base here to square off the units).

In respect to the previous comments about the need to use smaller figures to make the game look grand tactical, that would be fine. But most people like myself who play multiple rulesets are not going to start up a new scale for just one ruleset, nor are they going to rebase their figures. I have no interest in competitive wargaming, but am more interested playing out historical scenarios at the tactical and grand tactical levels.

From looking at the terrain now there appears to be plenty of room to play out this corps aside battle. My table is 12x5' so I believe I could also play out a multi-corps battle with the rules and my figures as based.

FoG-N looks like a great set of rules, and I look forward to playing some games using them. This forum has certainly taken off and the yahoo site appears to be growing.

Thanks to the members of the forum as well as to the authors of the rules, for helping in getting me started.

I think you can do multi corps games on a 12x5 table easily. we are just starting to paint up 28mm figs ourselves, at present we are using my old 1/72 Napoleonics to get a handle on the rules. we hope someday to run 2 corps each on our 4x8 table.
Top
Post Reply
2 posts • Page 1 of 1