This scenario concerns the attack of the II Austrian corps to seize crossings of the the Pleisse river between Connewitz and Dolitz. It is the 2nd half of the "table B" scenario for the Leipzig scenario of Napoleon's Battles. The other part is the Battle of Lindenau:

This is a rather small corps sized action (about 600 points per side), but it's not necessarily a beginner's battle due to the difficult terrain.

Deployment: At the start only Poniatowski and the 26th division are deployed on the table. Lefol's force (the Provisional infantry with attached officer) are deployed in Connewitz or anywhere west up to the western most river crossing. The Polish infantry can deploy anywhere between Lossnig and Dolitz up to the western most river crossings. The Polish artillery deploys within 6 MU of Dolitz on the eastern side of the Pleisse River.

II Corps - Meerveldt (skilled) - probably should be "competent" but I gave the French a unified command under and exceptional leader, so it only seemed fair to make the near-sighted Meerveldt "skilled"

Austrian bridging: The Austrians had some bridging. To represent this, if any Austrian unit accompanied by a commander is next to the Pleisse, they can attempt to place a pontoon bridge. They can do this by rolling two successful CMT. If the unit or commander is forced away from the river after the 1st successful CMT but before the 2nd one, the Austrians must begin again when a unit with commander are adjacent to the river.
Last edited by shadowdragon on Tue Oct 23, 2012 2:14 pm, edited 2 times in total.
Top 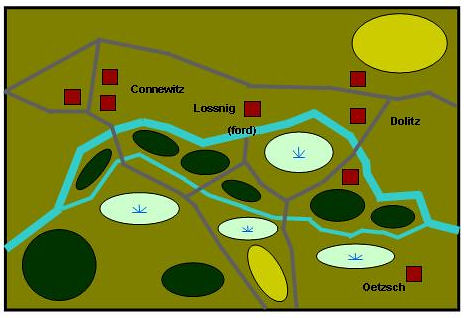 Woods and swamp are difficult terrain. The Pleisse River, except for the western arm (thin blue line), is impassable except at the bridges or the ford. The western branch (the thin blue line) is a "4-5" river (see page 98 of the rules). Units may cross if they are with a commander and pass a CMT.

Victory: If neither army is defeated, the player that holds both Dolitz and Connewitz has a major victory. The player that holds Connewitz but not Dolitz has a moderate victory. If a player holds Dolitz and Connewitz is contested, that player has a marginal victory. If both villages are contested, the French / Polish player has a marginal victory.
Last edited by shadowdragon on Sat Aug 05, 2017 11:06 pm, edited 9 times in total.
Top

What about the table size ?
Top

What about the table size ?[/quo

Chrisf1957 wrote:The images of the maps seem to have vanished for this and the other scenarios is there anyway they can be reposted

I'm not sure why you're not seeing the maps, Chris. It shows up for my browser. The link is correct and the maps are still in the same location. I moved some images of miniatures but not the maps. It's possible that adverts are screwing things up or maybe photobucket's server was down. I'm not really sure.

Here's the link to the album with the maps...see above for photobucket's new policy....

Fyi - I'm will soon finish the last unit needed to refight Mockern. It's only taken...ahem, 4 years after the 100th anniversary and 5 since I started the project.
Top

That's why our hobby is such fun. We set our own deadlines and don't even have to hit them if we don't want to

richafricanus wrote:That's why our hobby is such fun. We set our own deadlines and don't even have to hit them if we don't want to

Believe me I wanted to hit the deadline, but reality had a different schedule.
Top

Can anyone else see the map above? It seems that Photobucket doesn't allow 3rd party hosting (i.e., embedding images in other sites than Photobucket) unless you pay to upgrade your account. Advertising is apparently not bringing in enough revenue. I've no interest in upgrading my photobucket account, but before I remove the embedding code and leave the maps as links - you should still be able to access them as links - I would like confirmation that the maps aren't visible to others. I can see them but that's probably because it's my photobucket account.
Top

I can see the map. No need to use the link.
Top

geoff wrote:I can see the map. No need to use the link.

Chrisf1957 wrote:Shadow Dragon many thanks for the link to your photoshop bucket with the maps and great work

Thanks Chris. Working on a solution the replace photo-dumpster-bucket. Maybe blogger as madaxeman suggests.
Top

The maps are back up courtesy of Flickr. So far I've only done the maps for the Leipzig scenarios. Will see about what photos in other posts I'll fix.
Top
Post Reply
15 posts • Page 1 of 1