Here is "table D" of the Leipzig scenarios found in the Napoleon's Battle scenario supplement. Based on other sources, I've made some changes to the formations used in the Napoleon's Battle supplement. On the Coalition side I've deleted Pahlen's Cavalry Corps but added Roder's Prussian cavalry brigade since Pahlen, at least initially support the central sector of the Southern front, and there are references to Roder's cuirassiers engaging Sebastiani's cuirassiers. Also, I've deleted the 2nd LIght Division (Bubna) from the IV Corps since it wasn't in action until the 18th.

This scenario involves the combat between the French and Coalition forces east of Liebertwolkwitz. There's always a challenge in breaking up a battle into sectors. For example, some of the troops end up being in engaged in one sector, regrouping and engaging in another sector; reserves potentially could have been committed to any number of different sectors. Nevertheless, here's a go at the action between Macdonald's XI Corps (an interesting mix of nationalities and troop quality) and Sebastiani's II Cavalry Corps on the French side and Klenau's IV Austrian Corps supported by elements of Kleist's II Prussian Corps and Platov's cossacks. Victory is based on attrition. The side the defeats the other can turn the enemy's flank and win the battle.

1st (mixed) Division - Mohr (skilled)
1 large Grenzer unit
1 small Hungarian line infantry unit [Note: this is the Erherog Karl regiment from the 3rd division. It was in the front line so I put it with Mohr's division to make it a "legal" mixed division.]
1 large Chevauleger unit
1 large average Hussar unit [Note: this regiment and the Chevauleger unit represent 1 chevauleger regiment and 2 hussar regiments. If you prefer you can choose 3 small unit - 1 chevauleger and 2 hussar - in place of 2 large. The option of 2 large units was made to make this a "legal" mixed division (i.e., maximum of 2 cavalry units).]
1 medium artillery attachment
1 attached officer

Klenau and Zeithen are deployed on the table at the start of the game. Platov's brigades (FoG divisions) arrives as a flank march on the Coalition's right flank.
Last edited by shadowdragon on Mon Oct 22, 2012 2:19 am, edited 7 times in total.
Top

Both corps are deployed on the table at the game start.
Last edited by shadowdragon on Tue Oct 23, 2012 8:11 pm, edited 3 times in total.
Top

The game table - a big 5' X 9' (for 15-18mm figures) - lots of space to accommodate the cavalry action on the flank of the armies. If that's too big, then trim the map according to what size you have available but make sure that you keep the line of Gross Possna-Kolmberg-Klein Possna within the Coalition deployment area. 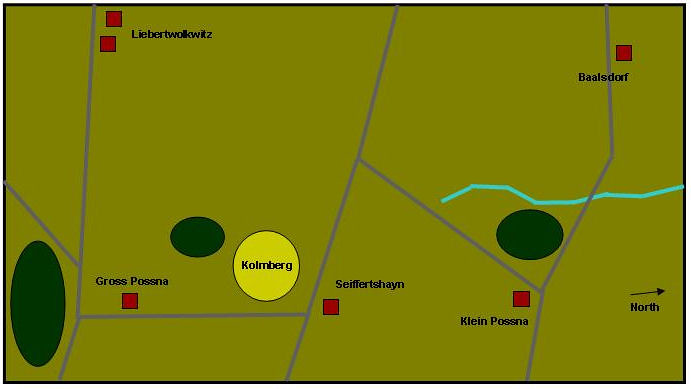 The difficulty of the stream (Parthe River) should be diced for strength of flow before deployment. Roll according to page 98 of the rules with a -1 modifier.

Deployment depths are anywhere up to 10 MU from the centreline (i.e., it's a meeting engagement and both sides are "attackers"). The exception is that the Coalition player can occupy all of the Kolmberg height.

) from his cossack brigades or can join one of the brigades so that this brigade will roll for entry with Platov's leadership level and not that of the brigade commander's.
Top
Post Reply
3 posts • Page 1 of 1