The last Leipzig scenario is their "Table C" scenario which involves the fighting in the south from the Pleisse River (Mark-Kleeberg) to Liebertwolkwitz. As one scenario this would be massive and involve about 5-6,000 points per side. I've decided to break that battle into two halves - (a) the western part which is the sector between the Pleisse River and Wachau and (b) the eastern part - the sector from Wachau to Liebertwolkwitz. This scenario is (a), the fighting between the Pleisse River up to (and including) Wachau. I found it necessary to do both at the same time in order to balance both scenarios. There are a lot of troops that arrive as reinforcements that could have been involved in either half - and in some cases, such as the III Russian (Grenadier) Corps did have an influence on both halves during the battle on the 16th. In doing both halves, I've allocated those reinforcements to try to provide a balanced game for both halves.

Absent from the reinforcements are Friant's Old Guard infantry division and the two Young Guard cavalry divisions (Ornano and Lefebvre-Desnouettes) of Nansouty's Guard Cavalry Corps. I have included Walther's Old Cavalry Division in part (b). Sources seem divided if Walther's division was involved in Murat's cavalry charge or not, but since the Old Guard Dragoons were definitely involved and it helps to balance the scenarios I have included Walther.

Both scenarios (a) and (b) are still big - about 2,500-ish points each. One could include Friant's old guard infantry division or Nansouty's two young guard cavalry divisions. These two (the old guard infantry and the young guard cavalry) would give the French an extra 500 points. I will "model" these formations along with the missing III Corps divisions (who spent the day wandering about) in a separate post so that players can allocate them in any of the scenarios as a "what if" option.

Deployment: Only Kleist's II Prussian and Eugene's II Russian corps are deployed on the table at the beginning (as attackers). The Austrian Grenadier and Cuirassier corps and the III Russian Grenadier corps arrive as reinforcements.
Last edited by shadowdragon on Sun Oct 28, 2012 4:34 pm, edited 2 times in total.
Top

IX Corps - Augereau (skilled - at one time exceptional, but now is past his prime)

Deployment:
All of the II Corps, the Polish Division that's assigned to IX Corps, and the IV Cavalry Corps (except for the 1st light cavalry division) are deployed on the table at the start - as defenders. The 51st and 52nd divisions of IX corps, the 1st Light Cavalry division assigned to IV cavalry corps and the I Young Guard corps divisions all arrive as reinforcement.
Top 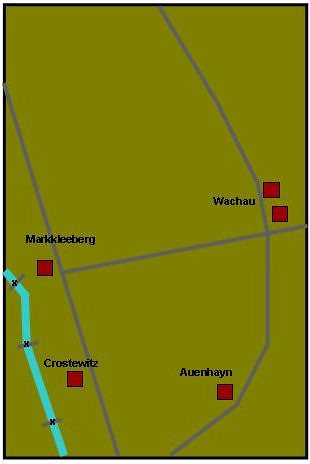 The river is impassable except at the broken bridges (road segment marked with an "x"). A CMT is required to cross the two broken bridges nearest Markkleeberg. The bottom bridge is assumed to be sufficiently repaired for troops to cross in march column without penalty.

The French II Corps, the Polish 26th division from IX Corps (and Augereau) and the IV Cavalry Corps (minus the 1st Light Cavalry Division) deploy on the table (as defenders) on the line from Wachau to Markkleeberg (along the road or behind). The Polish deploy in and around Markkleeberg, the II Corps to the left of the Polish and the IV Cavalry Corps to the rear. The remaining French forces can arrive as off table reserves. Oudinot (I Young Guard Corps) can arrive separately from his divisions or can attach himself to one of these divisions so that this division can be activated using Oudinot's leadership rating. The remaining IX corps divisions and the 1st Light cavalry division arrive anywhere on the east edge of the table north of Wachau. The I Young Guard corps arrives anywhere on the north edge of the table.