This not the cavalry battle of 14 Oct but the fighting on the 16th between Wachau and Liebertwolkwitz. It's the middle of the fighting in the south between the "Markkleeberg & Wachau" and the "East of Liebertwolkwitz" scenarios. It is about the same size as the "Markkleeberg & Wachau" scenario and also on the same narrow (4' wide for 15-18mm) front.

Deployment - Russian I Corps and the Reserve Cavalry Corps are deployed on the table at the start. The Russian V and the Guard Cavalry Corps are off table in reserve.
Last edited by shadowdragon on Sun Oct 28, 2012 4:35 pm, edited 1 time in total.
Top 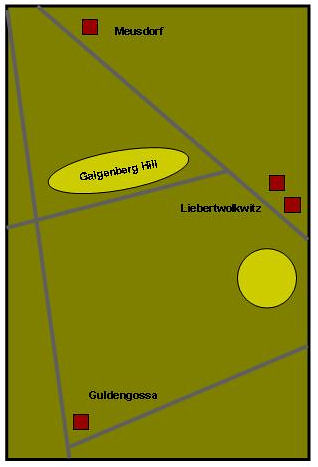 The French V Corps, Mural and the V Cavalry Corps deploy on the table (as defenders) anywhere behind the midpoint of the table. V Cavalry Corps deploys to the rear of V Infantry Corps. The remaining French forces can arrive as off table reserves. The corps commanders, Mortier (II Young Guard Corps) and Latour-Maubourg (I Cavalry Corps) can arrive separately from their divisions or can be attached to one of their divisions so that this division can be activated using the corps commander's leadership rating. These corps anywhere on the north edge of the table.

The I Russian and Russian Cavalry Reserve corps deploy on the table (as attackers) at least 16 MU away from the table's midpoint. Gorchakov deploys on the right side while Pahlen deploys to the left and/or behind Gorchakov. The V Guard Infantry and the Guard Cavalry Corps all arrive as off-table reserves. They can arrive anywhere on the bottom table edge. Their commanders can arrive separately or can be attached to one of their divisions so that this division can use their leadership rating for activation.