Please apply the update. I will not provide bugfixes for older versions.

Thanks but..how is this possibile?
I've downloaded the mod (for the first time ever) something like one week ago...
which version have I? I can't find it in the log.
Top

Maybe you did not realize: when you install the mod for the FIRST time you need to install the main mod first and then the latest update.

To prevent further misunderstandings I have merged the old 4.7 main mod with the latest 9.4 update.
This new COMPLETE version's size is now 344mb.

Just starting playing around with the Mod and it looks interesting so far - thanks for your efforts Robotron.

I'm a fan of the stock music however - is there some config file that I could edit to let the default music play ?
Man schlägt jemanden mit der Faust und nicht mit gespreizten Fingern !

This is not easily done because multiple parts of the scripts were heavily modified.
It would be easier to turn off the music (in this case weather sounds) altogether while listening to the original music in an external player.

These are in .ogg format so depending on the player used you may need to convert them first.

Ok - thanks - I thought it may have had a simple 0 or 1 value for the whole thing ... but as you said, the other way is viable as well.
Man schlägt jemanden mit der Faust und nicht mit gespreizten Fingern !

I'm new to forums. I downloaded this mod and I think it's great. I'm not the greatest player I think I'm an ok player but everytime I play central powers I do great in beginning but once Russia joins war I start to get my ass handed to me lol. I was wondering does anyone have any tips to stop the Russians from over running my eastern front. I was also wondering is there a way to just play one central powers faction. I meant in a future update. The only problem I really have with this mod is it seems either you win the war early or lose early. I might be just an average player but how can you last the whole 4 years of war. I just thought of this one is there a way to add cease fire in diplomacy screen in future update.
Top

Hi Panzernutt, welcome to the forums and thanks for your interest in this CTGW mod.

Thanks Robotron. I can actually do pretty good against france, Belgium and serbs lol. I guess you designed this mod if you have quick success it brings Russia into war a turn or 2 sooner. I appreciate all of the advice I haven't been using the Bring hindenberg event or Germany go east hmmm maybe that's my problem lol. I always go for the extra manpower and production events. I seem to always run out of ammunition after I take Belgrade and knock out Belgium. I think I'm playing this game from a world war 2 blitzkrieg point of view instead of a more tactical or cautious approach. I lose the war as soon as Russia starts kicking my ass lol. I'll take your advice it's appreciated. I was thinking I'm sure you play panzer corps wouldn't the map of CTGW be cool to play on a panzer corps campaign.
Top

I agree it's a tough challenge though but this mod is meant for players who enjoy a rough ride. 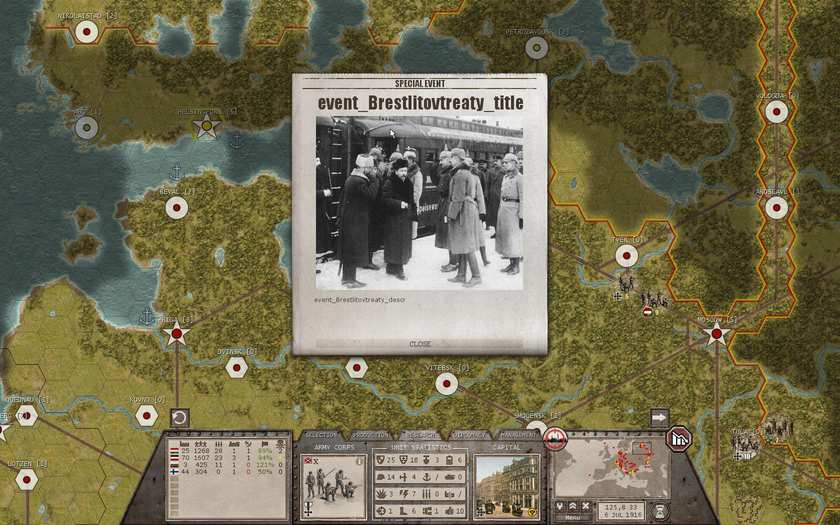 Another bug was reported and fixed.

Thanks most of all to you!

Thanks to you Robotron.

SC WW1 may shortly be stealing some thunder for this gaming category - but CTGW has its own charm that will keep me coming back for years to come ...
Man schlägt jemanden mit der Faust und nicht mit gespreizten Fingern !

@DonCzirr: "stealing some thunder"...that's a good one - as if anything would still be going on here anymore.
Any sign of gratitude from players is of course always highly appreciated though.

Thanks for the heads-up about SC:WW1 too, would probably have missed it otherwise.
I'll make damn sure I get my fingers on that game once it is out, if only to see whether any new feature seems just too familiar.
The first screenshots look very promising and the number of hexes for the map seems vastly improved compared to CTGW.