With Pike and Shot: Campaigns getting released this Thursday, it's time to introduce you some of the new features of this version!

This AAR has been created by jomni (Jayson), a famous member of the Pike and Shot community, who were in the beta of Campaigns.
Congrats Jayson for your contribution! 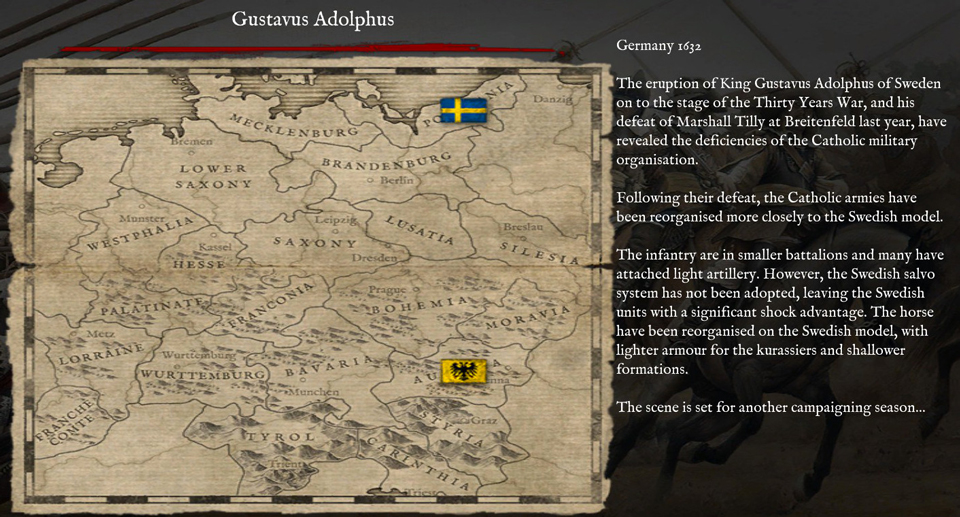 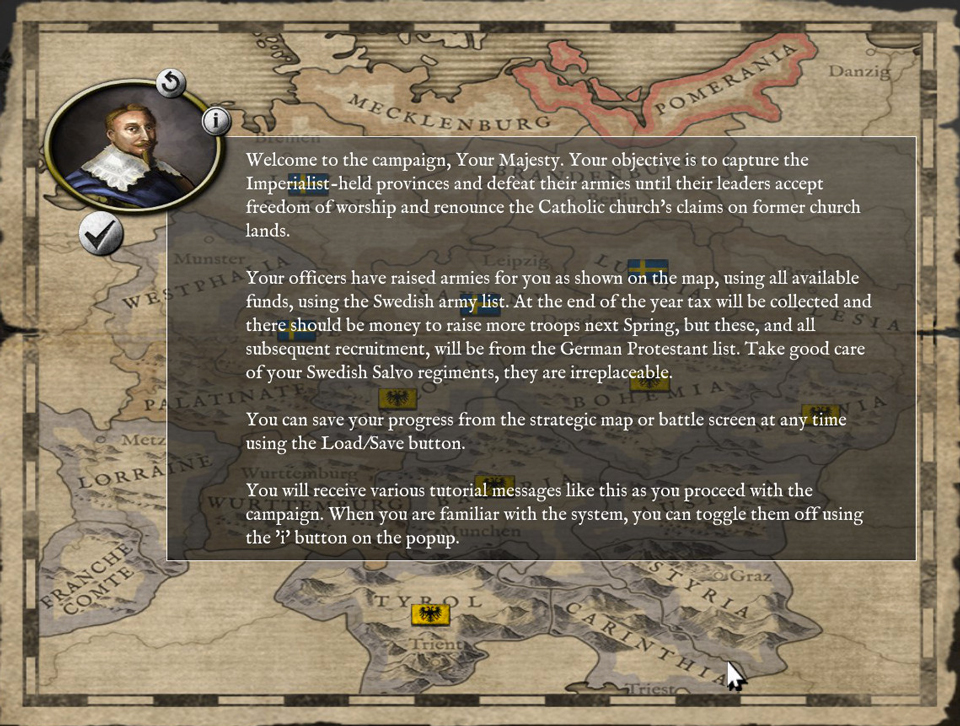 The Swedish musketeers were trained to perform the three-rank salvo. The simultaneous firing from three ranks was very devastating and made the subsequent pike charge even more effective. Since all subsequent recruitment is to be done in German soil, these Swedish troops are irreplaceable. 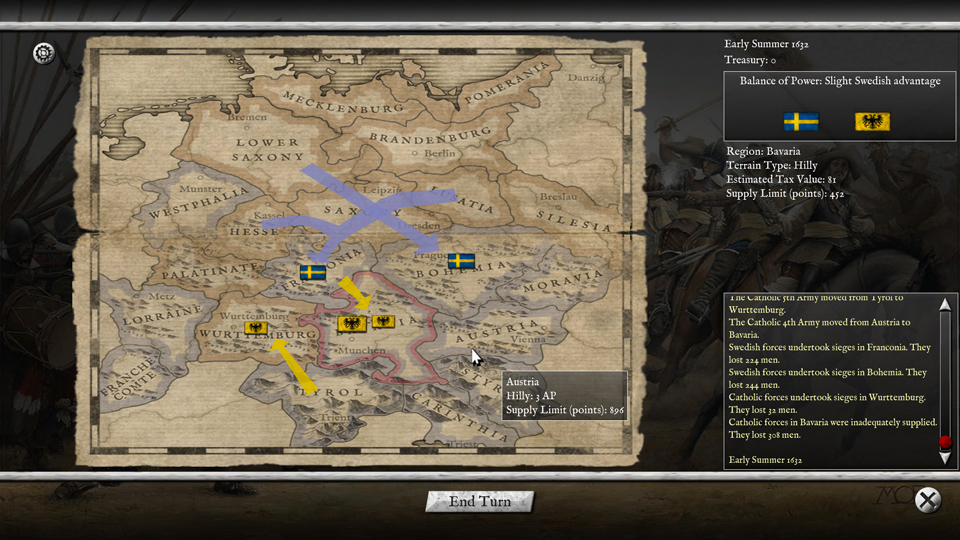 Early summer of 1632 saw the advance of the Swedish armies into Franconia and Bohemia. The Catholics, on the other hand, reinforced Bavaria and undertook sieges in Wurttemburg. While there were no major battles fought, sieges deal damage to the attackers while the province is still in enemy hands. Retreating and avoiding battle can deal damage to the fleeing army via rear guard action and desertion. And placing large armies beyond the province’s supply limit will also lead to hunger and desertion. 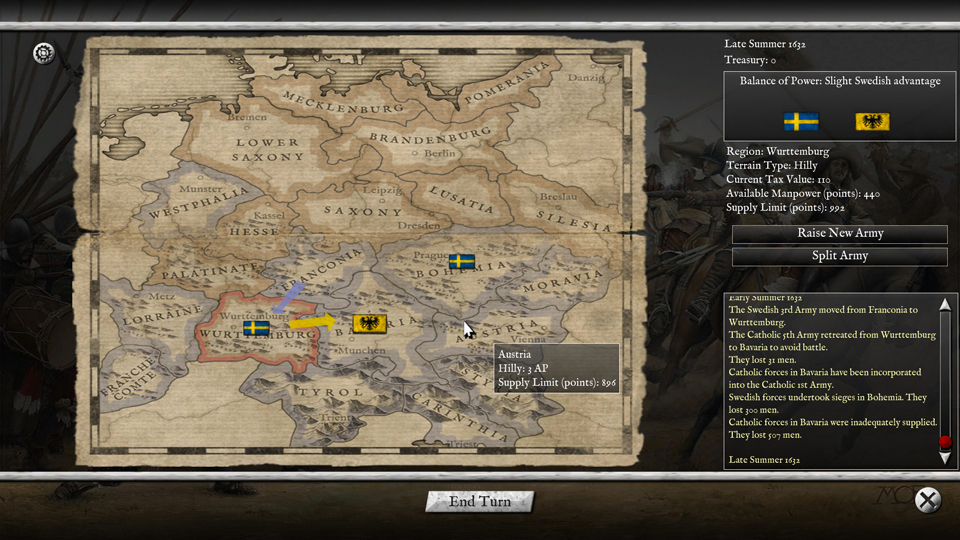 In late summer of 1632, the Swedish abandoned the sieges in Franconia to prevent the Catholics from capturing Wurttemburg. No battle was fought and the Catholics gathered at Bavaria. 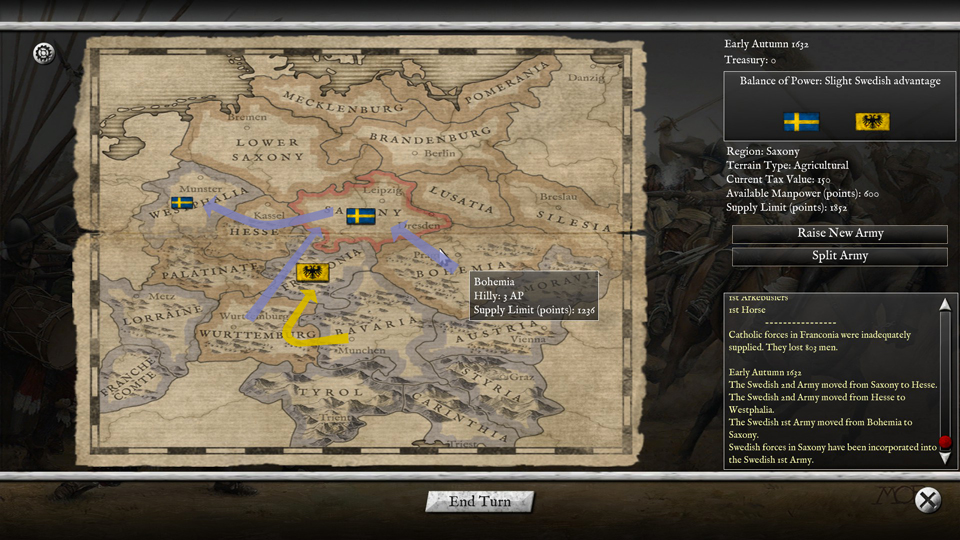 The Catholics regrouped and formed a large army that chased the Swedish army from Wurttemburg to Franconia but lost almost 800 men due to lack of supply. Our troops captured Bohemia and went on to besiege Westphalia. 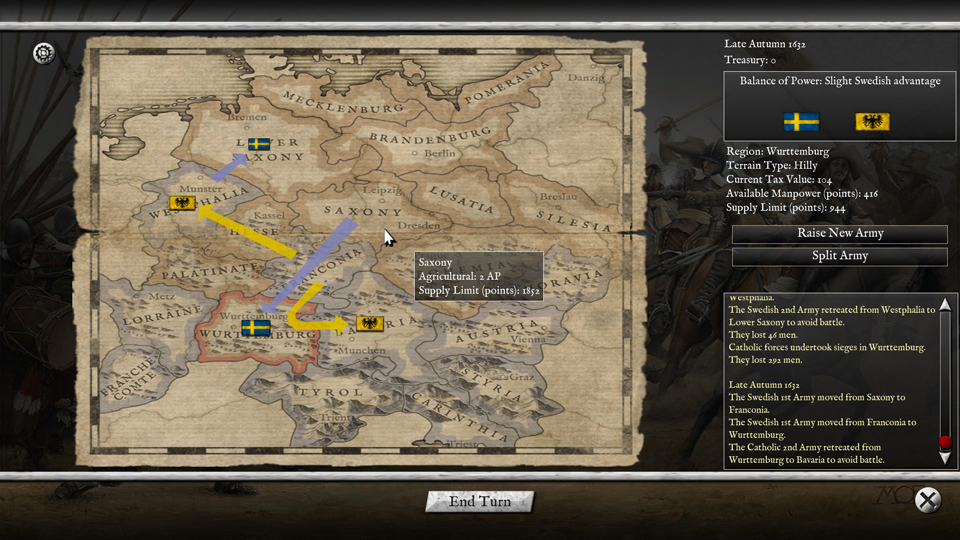 The Catholics split their army and sent a relief force to Westphalia. The besieging Swedish forces retreated to Lower Saxony. With a smaller army defending Franconia, I sent the Swedish 1stArmy to pursue the defenders from Franconia to Wurttemburg.

During the winter months, the armies would return to friendly held provinces. At the start of the following year, taxes are collected and new armies are raised. Raising armies also consume manpower from the provinces in addition to money. So provinces need some time to regain manpower after an army is raised. 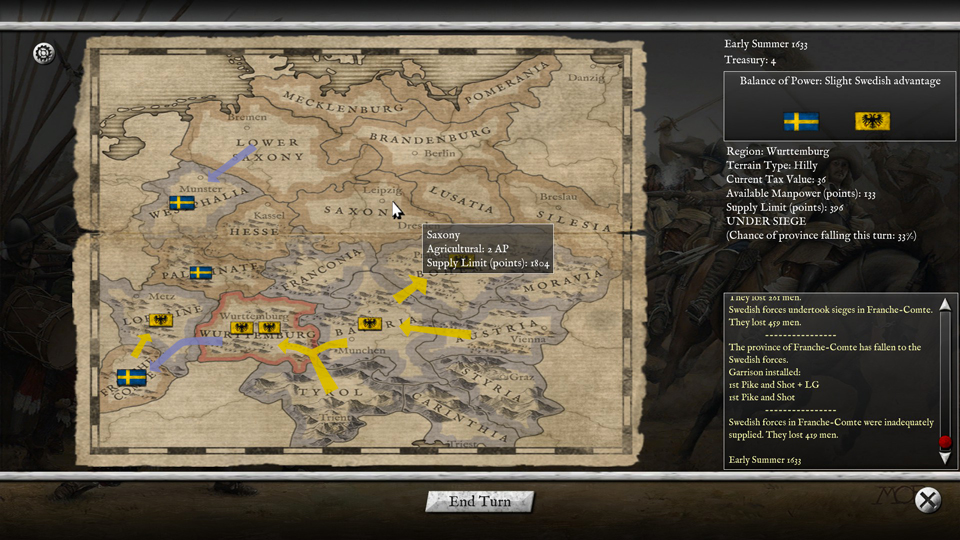 In the spring of 1633, the Swedish 1st Army moved from Wurttemburg to Franche-Comte and captured the province. Take note that garrison forces are installed once a province falls. This reduces the troops of the attacking army. Another Swedish army also moved into Westphalia while the Catholics attacked Wurttemburg. Our 1st Army responded by marching to Wurttemburg in early summer of 1633 where the first major battle after Breitenfeld was fought. 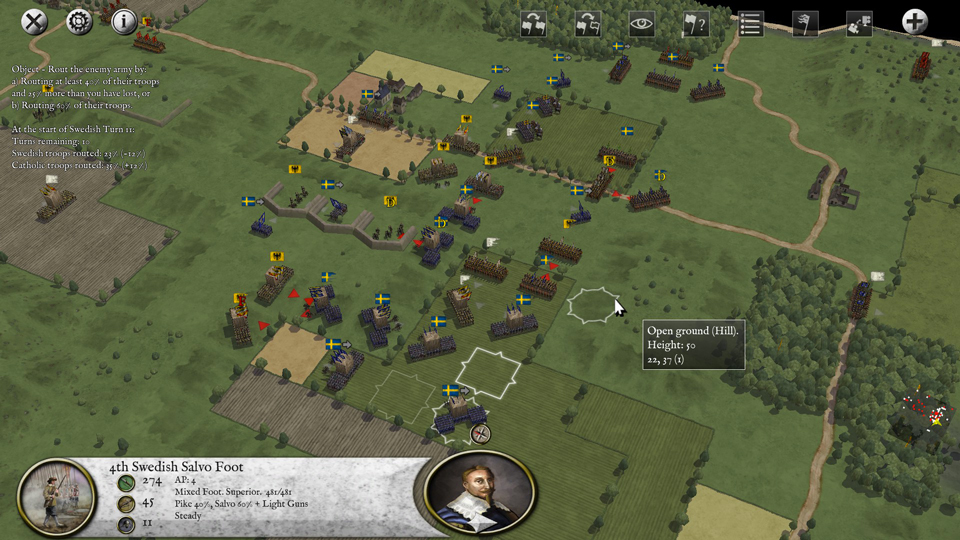 In the Battle of Wurttemburg (1633), The Swedish army of 9,000 fought against a Catholic army of approximately the same size in prepared positions. I avoided attacking the centre and split our forces into two. My left flank was composed of some cavalry while my right flank had all my infantry and the rest of the cavalry. The Swedish forces completely overwhelmed the defenders thanks to the Swedish salvo and cavalry. The skirmishers (commanded shot and dragoons) also did well and were effective is distracting the enemy from the rear, forcing them the expose their flanks to my infantry. 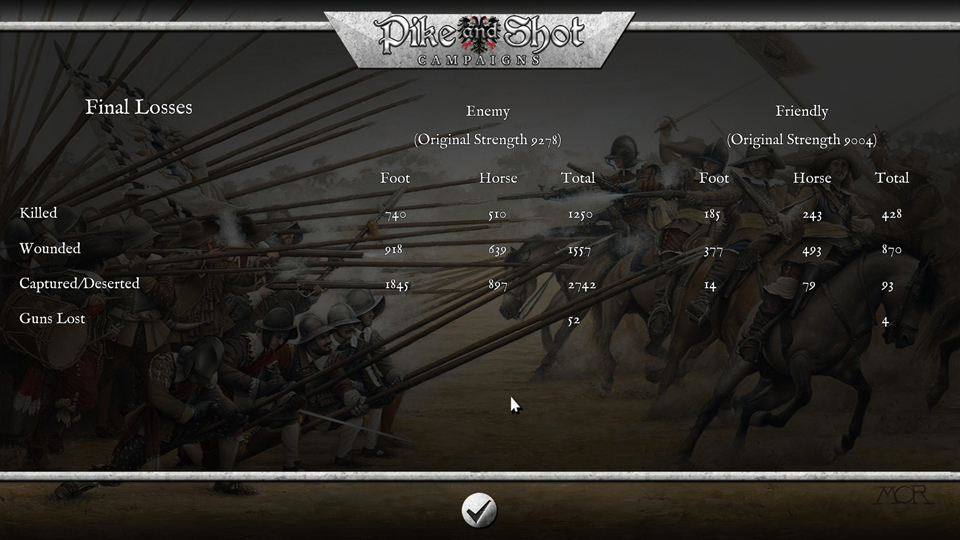 Winning a battle heavily favours the victor. The number of wounded is reduced and the captured and deserted troops are recovered. Also, troops gain experience and morale and this makes them more effective in succeeding battles compared to newly-raised troops. Of course, replacing and replenishing the ranks with fresh troops will lower experience and morale. 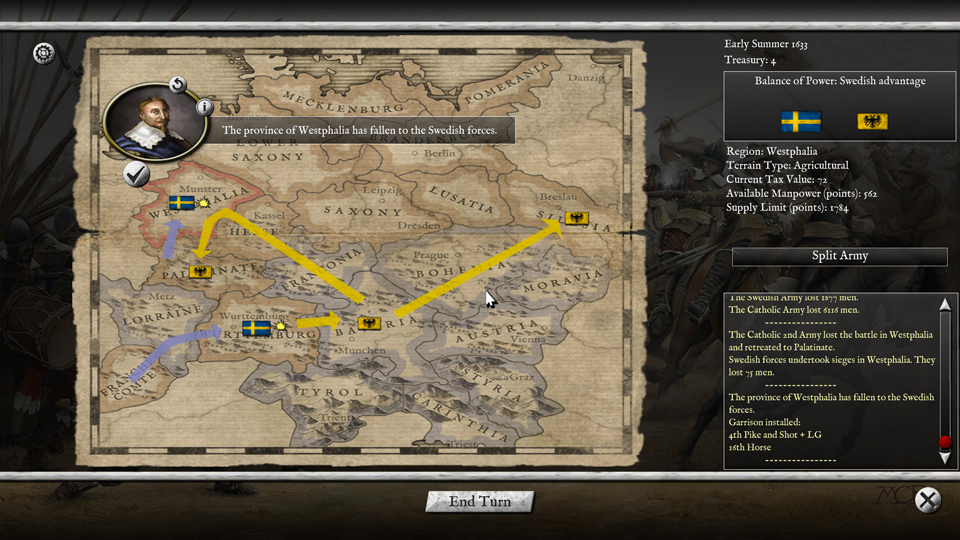 The Catholics sent an army to prevent the capture of Westphalia. In the Battle of Munster (1633), our force of 7,700 men went against a Catholic army of 10,400 men in open battle. Despite being outnumbered, we were able to gain a decisive victory. Westphalia thus fell into the hands of the Protestants. 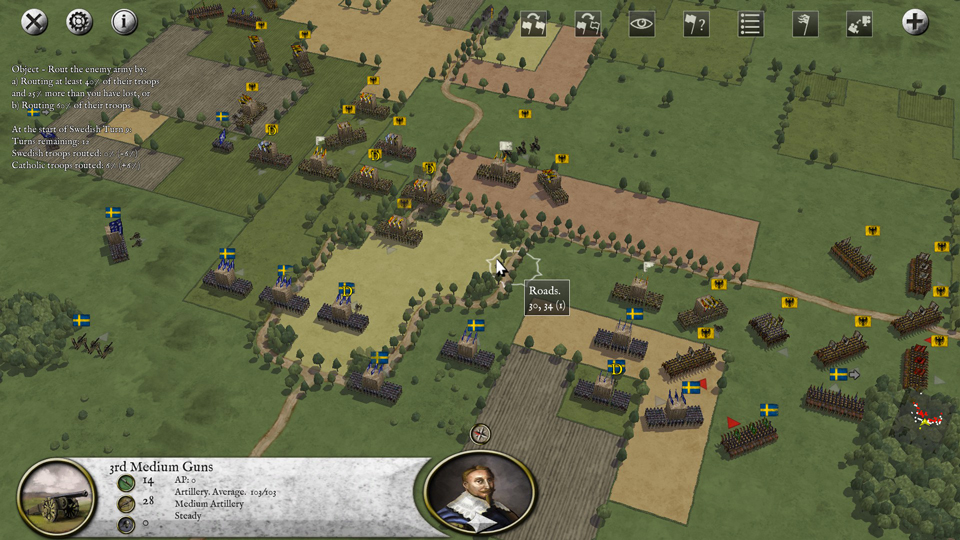 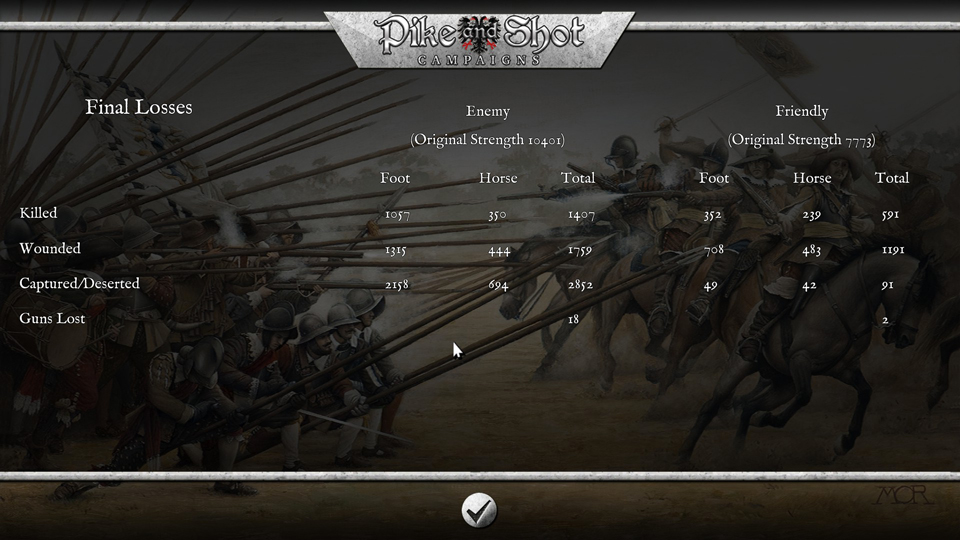 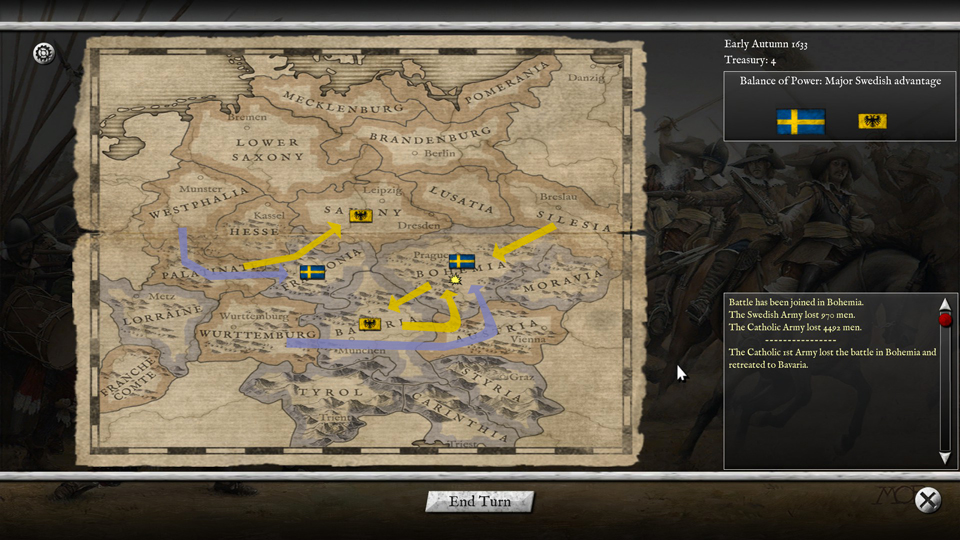 Early autumn of 1633 saw another major battle, this time in Bohemia. After capturing Austria, 6,400 Swedish troops met 8,500 Catholic troops in the Battle of Prague (1633) and won their third major victory. Swedish musket fire from infantry positioned on higher ground withered the Catholic infantry as they closed in while the cavalry held the flanks. 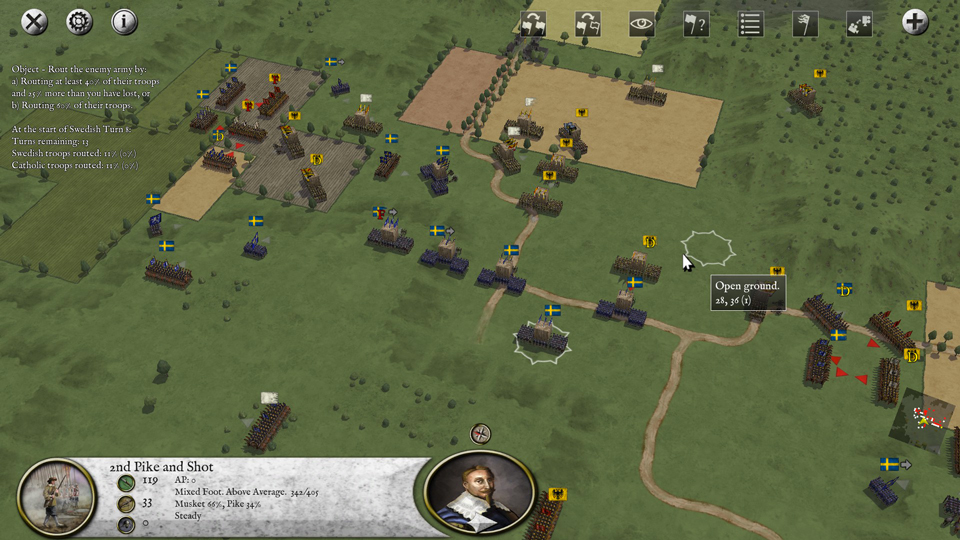 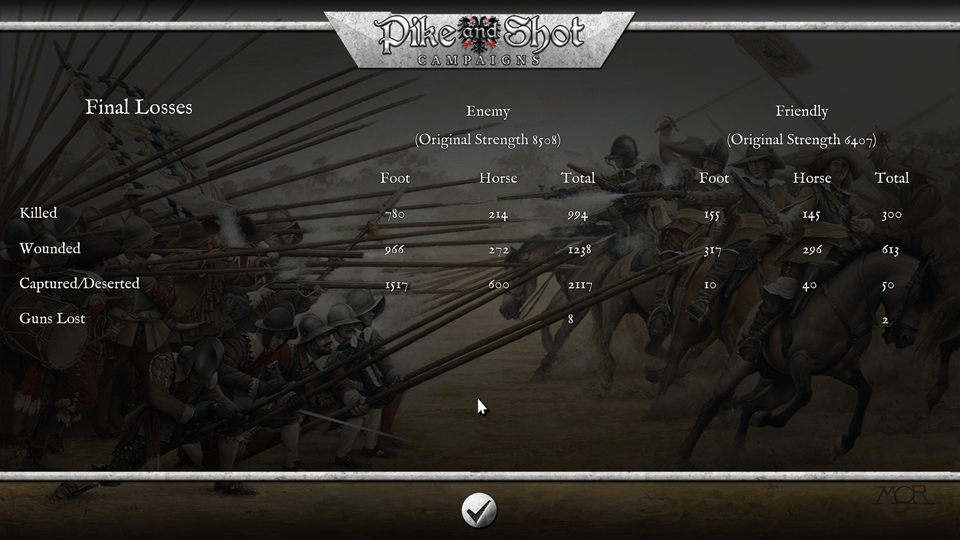 Notice that the Swedish 1st army is considerably smaller now compared to previous numbers (9,000). This is due to battle casualties, attrition from lack of supply, and setting up garrisons in captured provinces. Lack of supply is a big issue as provinces incur economic damage when invaded. The provinces will only recover after some time of peace. I wasn’t paying attention to this for most of the first half of the campaign. The concentration of Swedish troops into big armies, with the hope of defeating the enemy in decisive battles, led to unnecessary losses and prolonged the war. 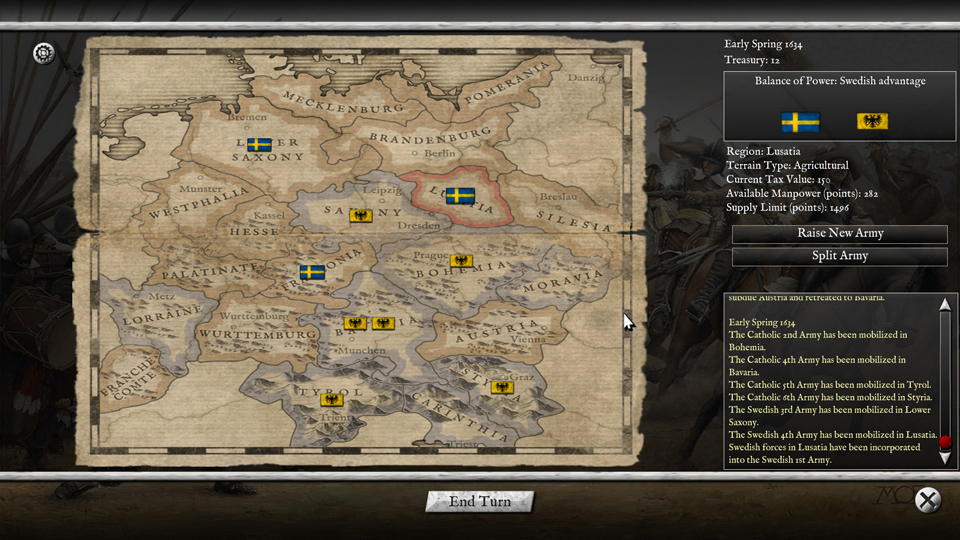 1633 closes with the loss of Saxony to the Catholics. 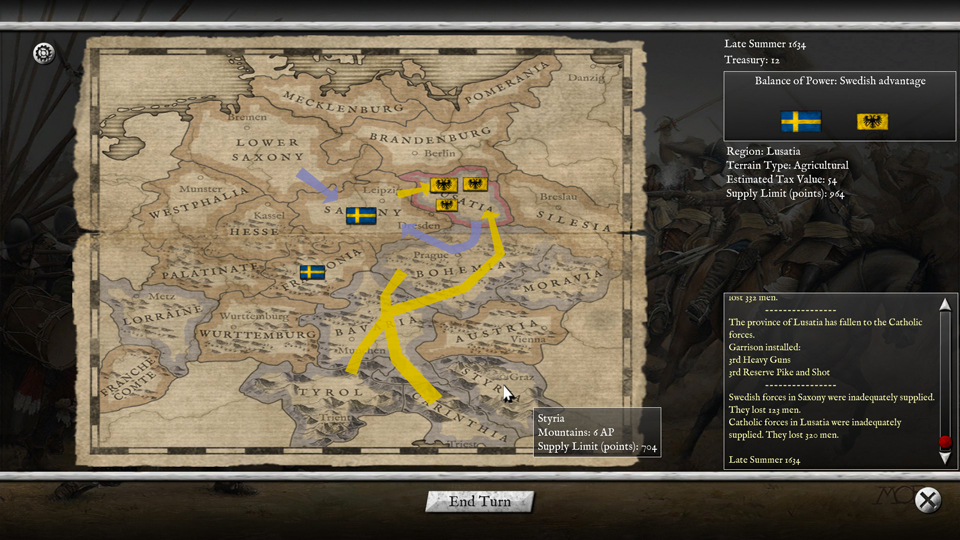 During the summer of 1634, I sent the 1st Army from Lusatia to recover Saxony and the Catholics fled without a fight. Anewly raised army from Lower Saxony was combined with 1st Army. The Catholics sent all their armies to consolidate at Lusatia. 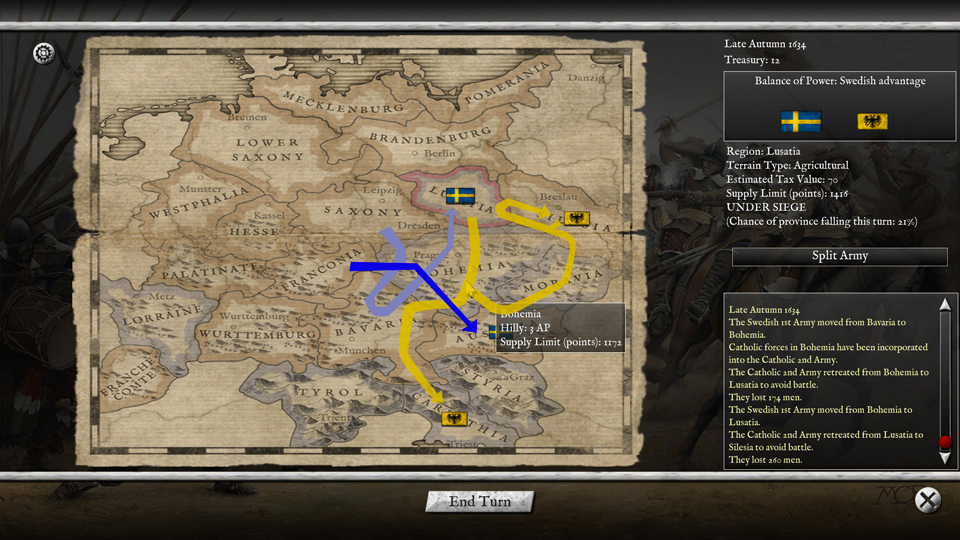 During autumn, 1st Army captured Bavaria and went on to invade Lusatia. The 2nd Army was sent to relieve the sieges in Austria. The inferior Catholic armies never gave battle and eventually retreated to Silesia and Carinthia. 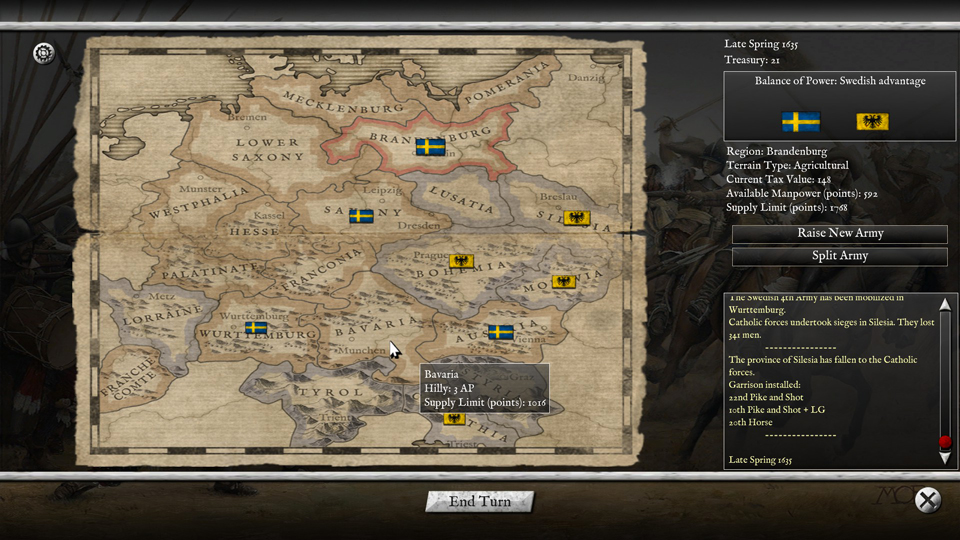 The Swedish forces started out with an advantage in 1635 as we captured several provinces during the previous years. 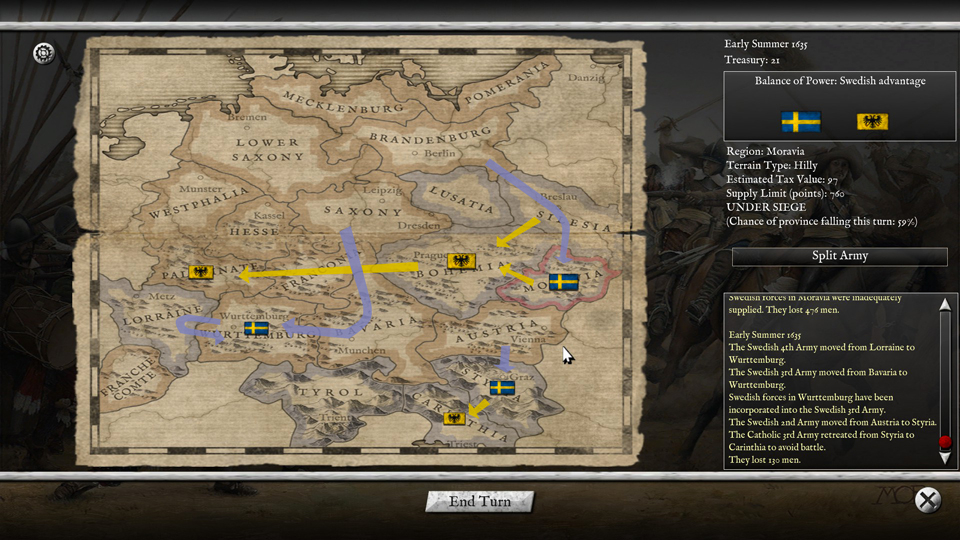 During the summer, a Swedish army from Brandenburg marched to Silesia and Moravia, sending the Catholics fleeing to Bohemia. An army from Austria invaded Styria. The Catholic forces then sent an army from Bohemia to invade Franconia but a relief force from Saxony forced the invaders to flee to Palatinate. I then merged two armies in Wurttemburg.

In autumn, the Catholics marched from Palatinate to meet the Swedish army at the Second Battle of Wurttemburg (1635). The battle was close and heavy casualties mounted on both sides, but the slightly outnumbered Catholic army of 6,800 defeated the Swedish army of 7,300 due to the good performance of their cavalry which decimated the Swedish left flank. It was a devastating blow to the Swedish side. 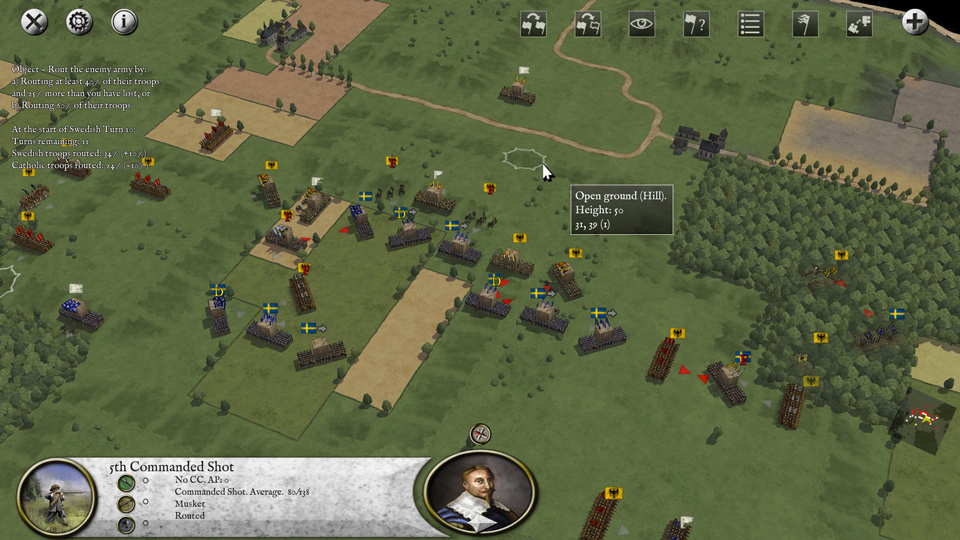 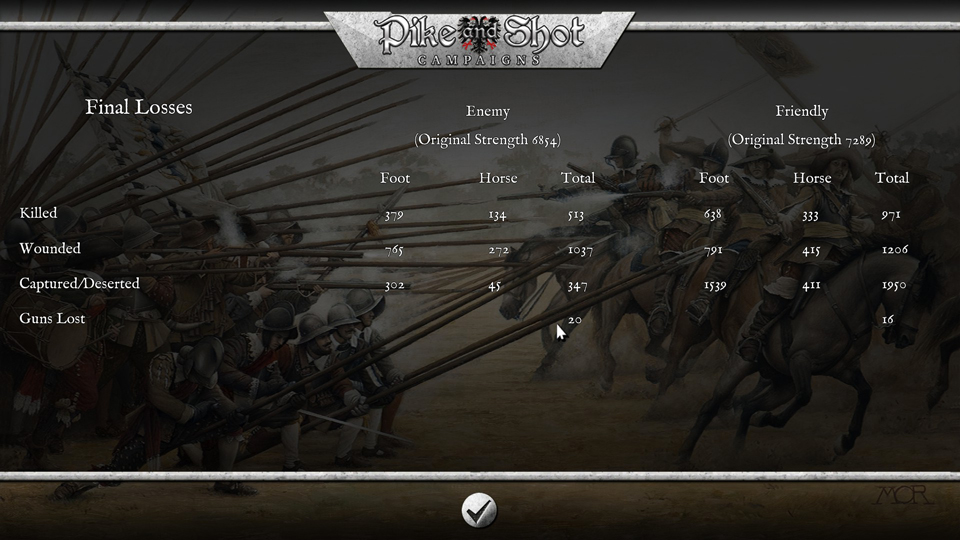 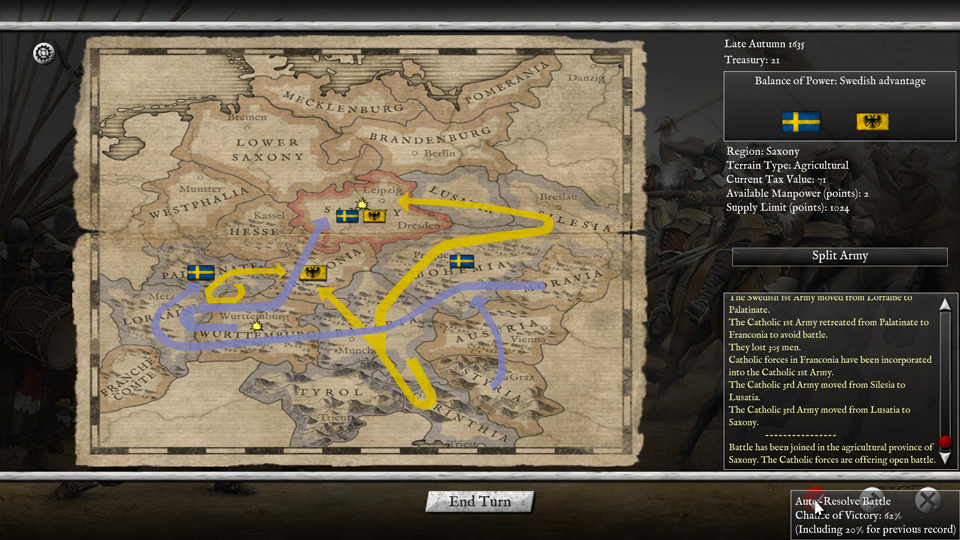 Moravia was subsequently captured by the Swedish forces and the army marched on to Palatinate. Styria was also captured and the victorious army moved on to Bohemia. Unfortunately, Bavaria fell to the Catholics and the army moved to Franconia, displacing the Swedish defenders to Saxony. A smaller Catholic army, which was previously sent to Bohemia from Bavaria, evaded the Swedish army and made its way to Saxony where the Battle of Dersden (1635) was fought. 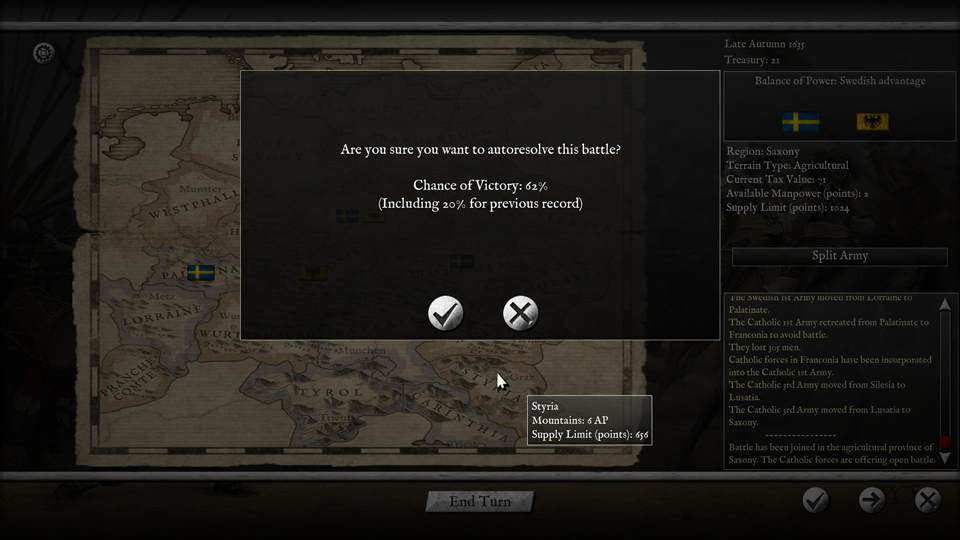 Small battles can be Auto-Resolved, taking into consideration the forces involved and past performance. But luck was not on my side and the Swedish army eventually lost the battle. The two losses in 1635 reduced the Swedish armies significantly as evident in the size of the flags on the map. 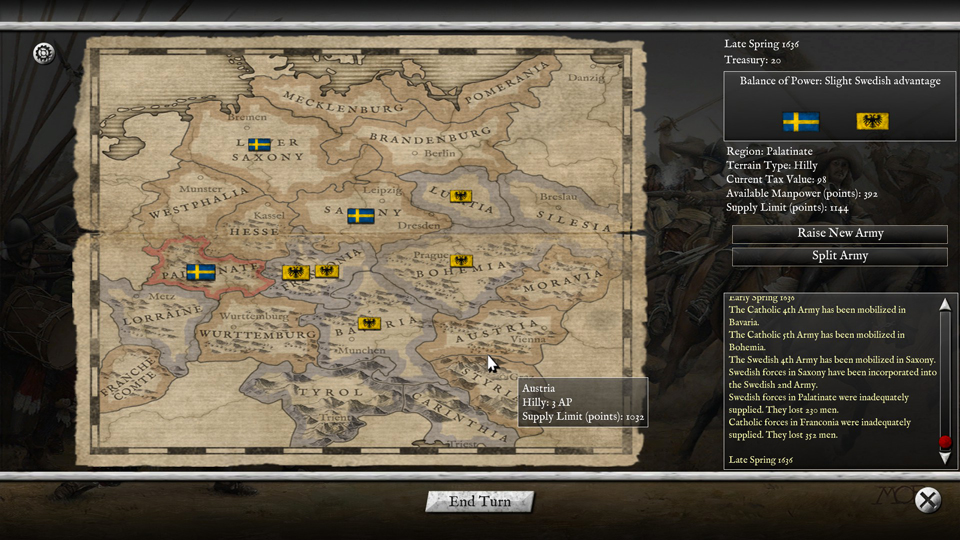 The devastating losses incurred during the previous year meant that the Swedish forces began 1636 with very little advantage as the armiesneed to be rebuilt. Fortunately, the Catholic armies need to be rebuilt as well. 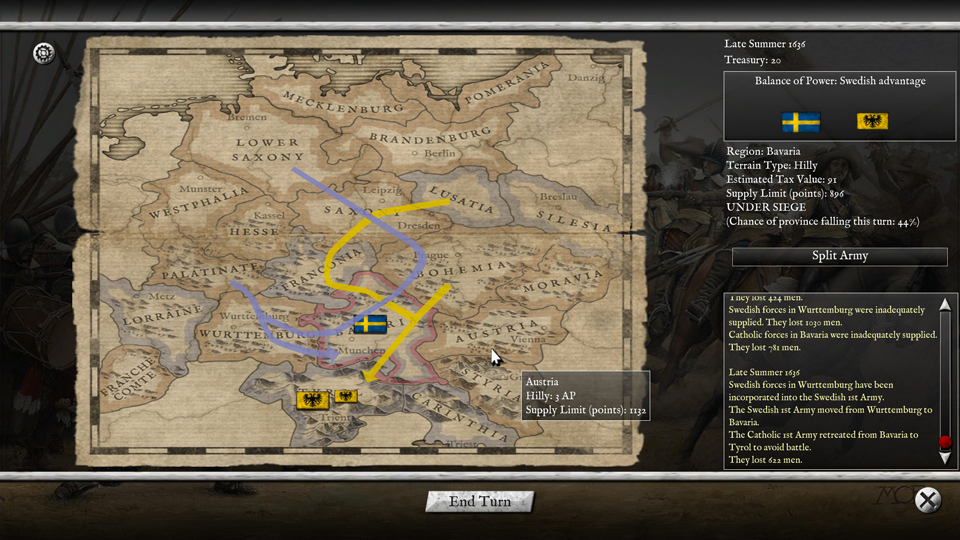 The summer campaign season started off with my combined armies from Lower Saxony and Saxony invading and capturing Bohemia. The army then moved on to consolidate with the rest of the Swedish armies at Wurttemburg. In hindsight, this is wasteful as the grand army lacked supplies and lost 1,000 men in the process. The Catholic armies consolidated their forces in Bavaria and lost close to 800 men. I then sent the Swedish grand army to Bavaria hoping for a decisive battle but none was fought as the Catholic army fled to Tyrol, losing 600 men in the process. 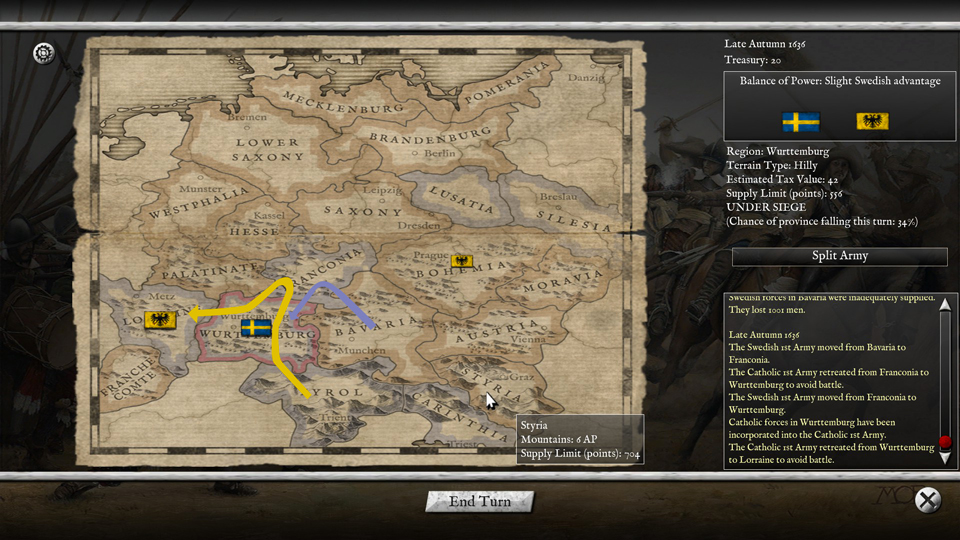 In the autumn of 1636, the Catholic forces sent armies to Wurttemburg and Franconia. Wurttemburg fell to Catholic hands. With Bavaria secured, the Swedish grand army at Bavaria retaliated by marching into Franconia first, displacing the small Catholic army to Bohemia, and then moving on to Wurttemburg. The Catholic army retreated to Lorraine to avoid battle.
To be continued…
Top

Thanks for this. It inspired be to start writing an AAR for my own campaign.
William Michael, Pike & Shot Campaigns & Field of Glory II enthusiast
Top
Post Reply
2 posts • Page 1 of 1

Return to “After Action Reports”