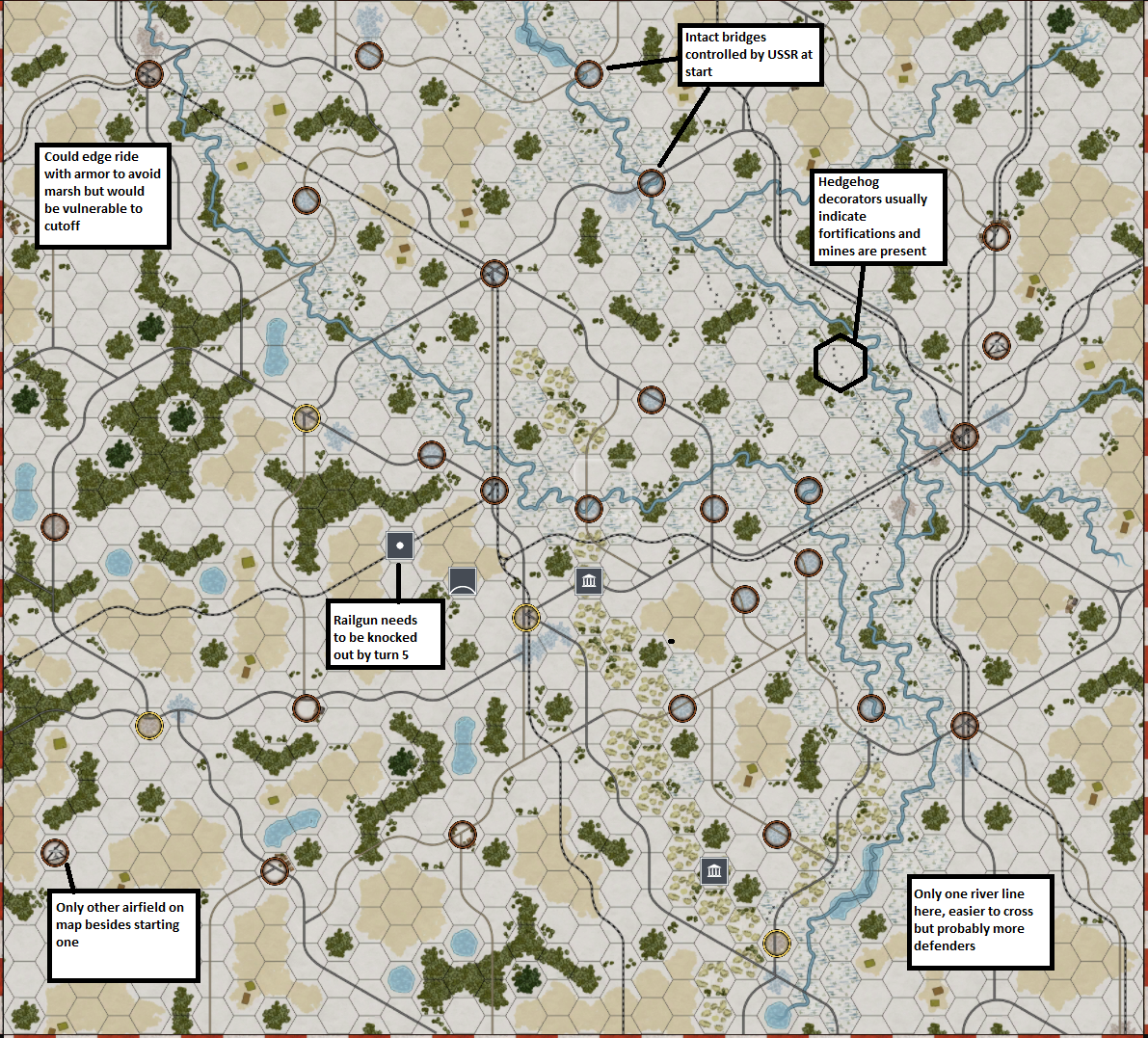 After conducting a thorough map review, I'm not loving the terrain or this battle.

A major obstacle noted in the briefing is the substantial marsh terrain on all approach routes. An additional obstacle is the need to knock out a railgun using only air assets at mission start. This is liable to be costly and will also mean no tactical air support is available for the initial and likely most difficult phase of the operation. Not ideal!

I expected all viable major roads to be heavily mined and for there to be bunkers of all types throughout. Recon cars are a natural counter to these tactics, but recon cars perform extremely poorly in difficult terrain and we do not have access to the M3 Scout Car, a halftrack much loved by Soviet razvedka units, or to Cavalry, a horse mounted infantry type that handles rough or marshy terrain with aplomb when well trained, properly shod and lightly laden.

However, a two key vulnerabilities exists in the enemy defensive layout. The first is that there are only four major supply sources on this map, the four primary objectives. Seizing the southwestern, northwestern and southeastern should, if I'm right about the number of bunkers on this map, disrupt enemy supply substantially and allow for a much easier capture of the center objective. The second is that there is only one airfield available to the enemy, and knocking it out promptly will at least in theory deny them any further air support. Airstrips may or may not be present on the map.

My initial plan of operations is to send 9th Mekh along the northnernmost intact bridge at Gross-Neuendorf, with 78 GRC on the bridge just south of that point at Keinitz. 9MC will advance with maximum speed into the enemy rear while 78 GRC secures its flank and fixes the enemy. This will allow me to seize two objectives with reasonable speed. Meanwhile 56 GRC will deploy at Goritz in the south, set up a defensive perimeter just beyond the bridgehead and advance to the objective.

Based on the allocation of available deployment slots this plan of attack is unexpected. Hopefully that means good things!

Naval infantry will be a precious resource during the marsh crossing portion of this map. I'll allocate one each to 56 and 78 GRC to ensure they have some ability to fight in the wetlands they need to cross.
Top

Allocation of forces will be challenging on this map in particular and may involve some substantial lateral movements. What we absolutely will not be doing is a broad front offensive as this map layout seems designed both to encourage and to punish such an effort.

The relative immobility of towed artillery indicates forward placement is advised for maximal use. However, this does appear to leave us vulnerable to counter battery which should be taken as guaranteed to occur on this map. I'm going to roll the dice on this one!

We'll likely need engineers in the first echelon, without question, but will also need relatively mobile and effective units to attack the enemy. Naval infantry or airborne units should therefore probably lead the charge with engineers following behind. Engineers should likely all be mechanized as the alternative implies far too much waiting.

I'm planning to bring AA, but I'm not sure how necessary it is on this map. I will not be bringing my La-7 fighters. Instead I'll be bringing a heavy strike component with 2x Yak-9T, 2x IL-10 and 2x B-25C (still the best strategic bomber available).

Here's my initial deployment and plan of attack.

Are you considering not pursuing the "Rail Gun" objective?
Top

It's always interesting to read how people approach a battle previously unknown to them. Nice AAR

Hilariously I have no interest in the Berlin Operation but am very excited for the Manchuria one! I suspect Berlin is required to play Manchuria, so I’m going for it.

I tend to conduct thorough map reviews before starting a mission as it makes the mission deployment more sensible and gives me time to develop an overall plan.
Top

Turn 9 middle on this one, I had intended to do end of Turn 8 but got carried away

I bet that Nashorn wasn't a pretty sight to behold too close to the artillery.
Top

I think the designer of this scenario anticipated a much heavier armor complement than I typically bring to bear and as a result this scenario has been very straightforward. The AI simply lacks the tools to deal with my elite infantry and can't find any tanks to smack around. The jet fighter was an ahistorically effective annoyance, but once it decided to brawl over my AA for a couple turns its fate was sealed.
Top

Bunker objective got me. Apparently it is illegal to just bypass all the bunkers

luckily I had a save from turn 17 and just got it done now that I remember the objective.
Top

Start of Turn 22, on track but delayed somewhat by the need to focus all energy on this bizarre bunker clearing mission
Top

It rolled in out of nowhere and knocked 5 points off my B4 while it was in a transport so I was pretty ticked. Having to reroute infantry to attack and refit the B4 delayed that part of the operation by several turns, so it wasn’t a totally useless move either.
Top
Post Reply
14 posts • Page 1 of 1