Original designer again (not Erik; the John Tiller customizers). Forever picking up after those guys. Note to Bruce: "It's 'U' before 'O' except after nothing!"

Yep, I know. You wouldn't make such a rookie mistake.

But sometime ago I glanced the 1941 scens and it sure doesn't get any better. For instance they have invented "elite Finnish 1st Parachute Regiment", which leads the way.

That's like saying the assault on Omaha Beach was lead by the 1st US Space Marines.
Top

CoolDTA wrote: ↑
Thu Mar 26, 2020 6:15 pm
...But sometime ago I glanced the 1941 scens and it sure doesn't get any better. For instance they have invented "elite Finnish 1st Parachute Regiment", which leads the way.

That's like saying the assault on Omaha Beach was lead by the 1st US Space Marines.

The original designer fooled me

Don't worry, exactly my kind of humour. But beware, I might actually come up with some exploit...

Agree. Good solution, I like it.
Judging by the quality set by BrucEriks first WinterWar39 campaign, maintaining this thread and your merger of forces was definitly the right decision. Thanks! Looking forward to the next campaign(s) of yours!

You can use simply regular infantry. Fourth Infantry Regiment (JR4) is the unit in question. Three battalions (I/JR4, II/JR4, III/JR4), Mortar Coy (13./JR4) and AT Coy (14./JR4). Perhaps Mortar Company could be heavies? You decide.

I am up to the crossroads (plus Turku is done, of course). I intend to have an initial "experimental" paratroop mission in each of these scenarios - the player will not know the difference since he plays only one of these scenarios in the first go-through. Muolaa may need to be expanded and altered as to objectives to accommodate.


If the player defeats the initial paratroop mission, then he will not see paratroopers in some of the succeeding scenarios. A campaign variable will inform him so. If he fails, then he will see paratroopers in the future but nothing elaborate, just some extra troops flying in and a mention of "since you were such a bad player on 11 February 1940, the Soviets have been encouraged to use more airborne troops."
- Bru
Top

One of the best practices that I have found is to place no friendly units on the map, maybe even clear static units like bunkers and foxholes, and just patiently watch the AI execute its tasks for as many turns as necessary. Not only can one learn if these tasks are being performed properly, but one can pick up on what amounts to undesirable impediments to its performance.

For example, this is Turn 6 (the Soviets have moved) in Lähde. Many of the Soviets have not even made it out of the dense forest and swamps yet and are in bad shape as to efficiency:


Now, suffering in dense forests and swamps could be an historical part of a scenario. If so, fine. But if not, then the designer is unfairly weighting the scenario against the AI and will probably be disappointed with its performance. So will the player, waiting for the battle to begin and wondering why it's so easy to knock off orange and red enemy units.

These campaigns have taught me much about the judicious placement of terrain, as it has such a profound effect on AI movement and outcomes. Lähde forests will need to be thinned and swamps to be drained a bit for this scenario to work properly.

Funny, I would have thought that "frozen swamp" would not be a problem, but apparently the cold climate has no effect on its deleterious effect.
- Bru
Top

Another thing that I have learned: AI tasks are "advisory" only. Meaning, one cannot get every unit on the team to obey orders consistently. Even if there is only ONE unit in a team, it is likely to disobey orders at some point, and that includes units marked as STATIC DEFENSE, incredibly. If the unit is mobile, the only ironclad order is "Idle." I think.

Maybe it's a reflection of what happens in real warfare. Confusion, incompetence, cowardice, zealotry, what have you. Lesson to the designer: Don't try to choreograph everything down to the last unit and last detail. Make AI teams of sufficient numbers of units so that their task will generally get done and approximately when one would like it done.
- Bru
Top

bru888 wrote: ↑
Fri Mar 27, 2020 2:24 pm
Funny, I would have thought that "frozen swamp" would not be a problem, but apparently the cold climate has no effect on its deleterious effect.

Maybe an oversight in the game?

Your designer's musing are always an interesting read. Thanks for sharing them!

A swamp in any other weather would be just as swampy
- Some guy, probably drunk
Winchester: Klinger, you're dumber than you look, and THAT boggles the MIND.
A great quote from one of my favorite TV shows, M*A*S*H
Top

Well, he's somewhat less likely to get his feet mucky now. Also, I trimmed the top 10 hex rows off the Lähde map - too much extraneous territory which, when the off-map airfield is on the map edge up there, is when we get complaints about too little airplane fuel - so I tossed the template. Lähde is going to be a lot of fun, I believe. Among other things, it has a new mechanism in it for a truly unique objective award. Tested repeatedly, and it actually works!

Could you please copy the scenarios to my folder as they get finished.
I'd like to start testing the campaign in 8.3.9 beta.

Lähde is done. It took a long time but the good news is, it being one of the three crossroads scenarios, I am taking the opportunity of using many of the same elements for the other two on this level, particularly the paratroop mission. The player will notice some similarities but only if he goes back and chooses a different path at the crossroads. Maps, briefings, and objectives will be different for each scenario, of course, but significant time will be saved in other ways.

CoolDTA wrote: ↑
Sun Mar 01, 2020 6:27 pm
For Muolaa scen there doesn't seem to be any decent map. Referring to the source, I made the map below for you. The church is the big + sign. Note that there are no fixed positions in this area (bunkers etc.), only field fortifications (mg nests should be ok). 'Pappila' means vicarage - maybe worth of a flag if you so choose.

A very "decent" map that you made, Cool. Cropped to the proper proportion of 1.1 to 1, it is serving as my template for redesigning the Muolaa scenario map. The original designer version was too small and too much lake. I want all three scenarios in this crossroads to be the same size, for various reasons.

Still a WIP, obviously, but here is a preview of a couple of hopefully interesting objectives:


Squint your eyes when you are looking at those fortresses and bunkers. See the holy edifices instead! (Vicarage left to right: Residence, School, Dormitory. And no, they don't fight back, at least not very seriously. Finnish flag but separate AI faction with idle units, strength = 1.)

Of course, only after erecting all those edifices, naming them, and writing associated text, did it occur to me, what about the Lutheran denomination? Was my resource correct in referring to the church as Lutheran? What about my use of the terms "vicar" and "vicarage"?

In the latter article, it says "The structure of the Evangelical Lutheran Church of Finland is mainly based on geographical division. Every member belongs to the parish of their domicile, with parish boundaries following municipal boundaries. Large cities, on the other hand, are usually divided into several parishes, with the geographical location of the members' homes determining parish membership. The membership of a parish varies from a few hundred in small municipalities to around 60,000 members in the parish of Malmi, Helsinki. According to the Church Act, the parish is responsible for all the practical work performed by the church. The parish is headed by the vicar and the parish council."

Whew. That reference to "vicar" put my mind at ease.


Okay, enough fun and games. As the colonel says, "Let us now (re)turn to our plan of battle."

No, they are farm(house)s. Important ones getting themselves on the map, but that's quite common. The latter name is 'Ojala' - sorry for the poor quality.

Note that pappila (Fin) = vicarage (Eng). It looks weird now you having two vicarages next to each other. As said before, there were no fixed fortifications in the area. But in this case they represent individual buildings which is a good idea imo.

Muolaa Church was Evangelical Lutheran, correct. Very nice briefing and historical also considering the religious aspect that was there. 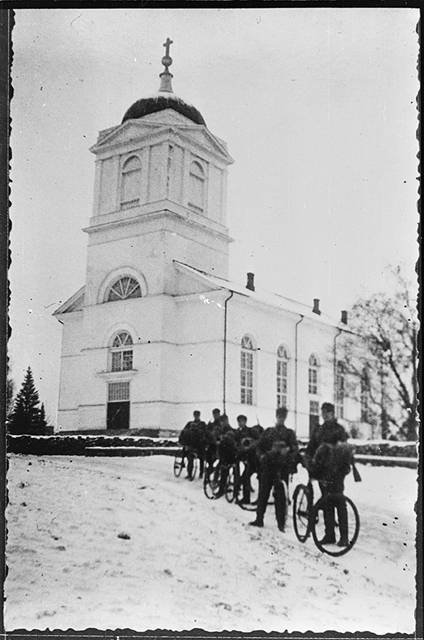 CoolDTA wrote: ↑
Wed Apr 01, 2020 10:28 am
Note that pappila (Fin) = vicarage (Eng). It looks weird now you having two vicarages next to each other. As said before, there were no fixed fortifications in the area. But in this case they represent individual buildings which is a good idea imo.

One vicarage, actually, but two flags saying the same thing which is dumb. I will go with one flag and the single Finnish word and work in a translation in the text, as I have been doing. I will use those photos, thanks. Is that the actual church?

My kingdom for a unit in this game that would serve as a generic building. Battle of Britain has one. Where is the suggestion box again?