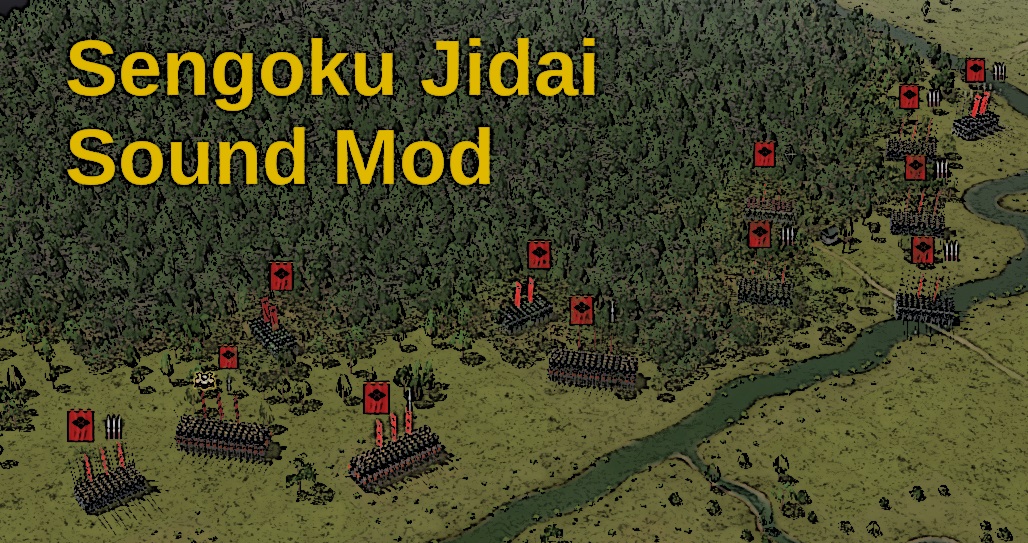 Well, it's a sound mod for Sengoku Jidai, based on the one I did for P&S. New fighting and revised movement sounds etc., ambient sound backgrounds which replace the battle music, new main menu music.

Please notice that the greater part of this mod was created while being intoxicated. Blame it on Mrs Merkel.

- Ambient sounds: Go to Data/Music. Make a backup copy of all files in this folder! Put the mod files there.


I appreciate all feedback on the mod. Thanks in advance!

by jomni
Thanks. Your map is green. You working on a green map?

by Adebar
Yes. Wrote about it in this thread (scroll down to the bottom of the first post):

But I guess it's better to wait for some official 'green terrain' patch ... There are problems with the SJ overlay on P&S terrain and tile textures that were not part of P&S (like cliffs).

by jomni
Yeah. SJ has a few more tiles and overlays not used in P&S so a direct port is not a 100% fit.
We do have plans about the green tiles. But can't say much at this point.

Anyway carry on with whatever you are doing.

by blond_knight_new
I feel like alcohol was involved in the creation of this mod.

I like it except there's a squeak or chirp in the infantry movement sound that is a little annoying.

by Adebar
Took me several days to come to a halfways satisfying result with those infantry movement sounds. Rewatched Kagemusha recently and wanted to recreate the fast step of the Ashigaru combined with the rattle of equipment and Sashimonos like it is presented in the movie. The heavy infantry movement sound of my P&S mod seemed inept in context.

Will definitely try to improve the sound soon, with or without booze involved.

by Adebar
Just a quick note:

I'm working on an update of the sound mod for this marvelous game, some sweet stuff will be included.

Of course, much booze is involved in the work. Folks, since 1918 you don't have to give a fuck.

Yeah, in France it's "jaja" (high alcool wine) in WW1; then "bibine" (bad beer) in Algeria 'events'.
(Your youtube video is ended)
Thanks for this game.
All times are UTC
Page 1 of 1
Powered by phpBB® Forum Software © phpBB Limited
https://www.phpbb.com/