The Ming and their enemies - Round Two

The Qing infantry cowered on a ridge surrounded by woods, their cavalry deployed, with a unit of medium artillery, in more open ground on the left wing. The Mongol light cavalry made a wide pass to the left, attacking along the baseline, and succeeded in tying up a third of the Qing infantry.

The main Mongol attack was blunted by the Qing cavalry, which had an advantage over the smaller Mongol cavalry units, and managed to hold their own in melee with the (disrupted) dismounted Mongols. That was the cue for the Qing infantry to pour off their ridge, to support the cavalry, and seal victory. Several units of crack Mongol infantry, drawn off by the Qing light cavalry, reached the main battle too late to affect the outcome.

The final score fails to reflect that the Mongols seized the advantage, and controlled the action, for much of the battle.
Top

Very hard battle for me. Most time I have feeling that I lost it. I have more mens (14k to 10k) but with cost of small number of horses and many raw units. So at beginning I winning with more my units engage in shooting and mele but when enemy horses come I have big trouble to stop them. I have luck that they were mostly on my right wing so I lost it but rest army win battle.
PS: I think that Tibetan Lords routed more my mens than I his but I have 40% more mens so at percent is my minimal win.

And I was so close to a bonus point! There was one enemy fragmented unit, but I could not finish hime off. Moan, moan...

Well played Fikabo. I was impressed by Fikabo's deployment. Shooters in columns three deep, with intervening columns for his massed artillery. This meant that my troops were disrupted (often) before making contact. I made mistakes as well of course, such as allowing my skirmishers to be isolated and destroyed.

On very strange map (blue my moves, red enemy) two times more Rebels(14k) win with Mongols(7k).
I have most my units equal on whole front (battle was mostly on my left side of map). Horses on my left.
Most Mongols infantry was on hill. All enemy skirmishes on my left and cavalry on my right.
Mongols unit were mostly superior.
I move my right units forward to shouting hill from both sides.
Still my shouting work very weakly on them.
I have made some mistake in this moving so I have not prepared on time when enemy cavalry attack from my right side.
First charge I locked because it goes via narrow gorge.
With secend I have no enough strong units and cavalry and this charge destroy about 8 units (nearly all which I lost).
After this, lucky for me some cavalry decide to pursing, rest get many shouting, meantime I destroy many skirmishes and attack hill with my left wing.
1 or 2 enemy units don't want to stop fight but autobreak at this attack and I won.

If cavalry charge start a little earlier and all from secend position I have no chance to win. 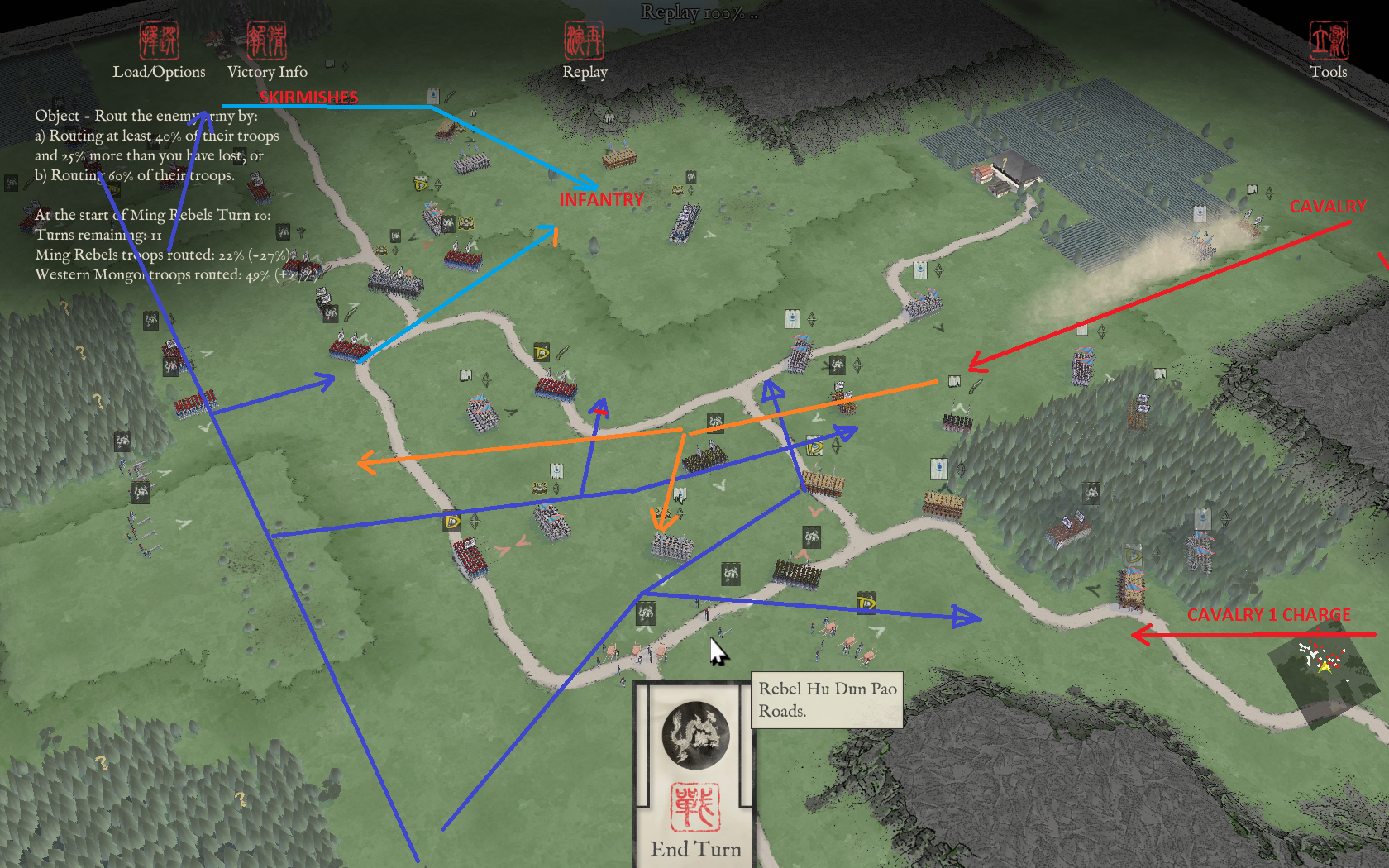 Map: Most plain on left and small hills on my side where I put artillery and big forest splited by small corridor on my right.
As KiwiWarlord is good in forest and I had small number of skirmishes I just put my units before forest with plan not to go inside. But because there was risk of attack my centre from forest in middle of game I move here some units and some stay on edge which gave him advantage if Ming start attack from forest.
I plan to be more aggressive on my left but because Ming decide to attack in centre so stay here and in centre and shouting. Shouting goes quit effective so by long time I had keep enemy far from my units and when mele start I have also luck. For example: attack Ming Cavalry with General on my Raw Bow not making any damage to my unit. Left wing nearly to the end was only shouting. At end of game my center was empty (or rather filled with routed units) and my artillery was in danger but it was to late.
Top

Tough game for the Jurchen outnumbered by 6000 men and fighting in & through woods and rivers.
Top

Yeah the river crossing against that double gun battery was nasty.