There is no peace among the stars: the Imperium of Man is beset on all sides by all kinds of threats. Among them is the Orks, a barbaric and warlike xeno race. One of their fiercest leaders, Grukk Face-Rippa, leads his Red Waaagh! in the Sanctus Reach system...
Post Reply
8 posts • Page 1 of 1 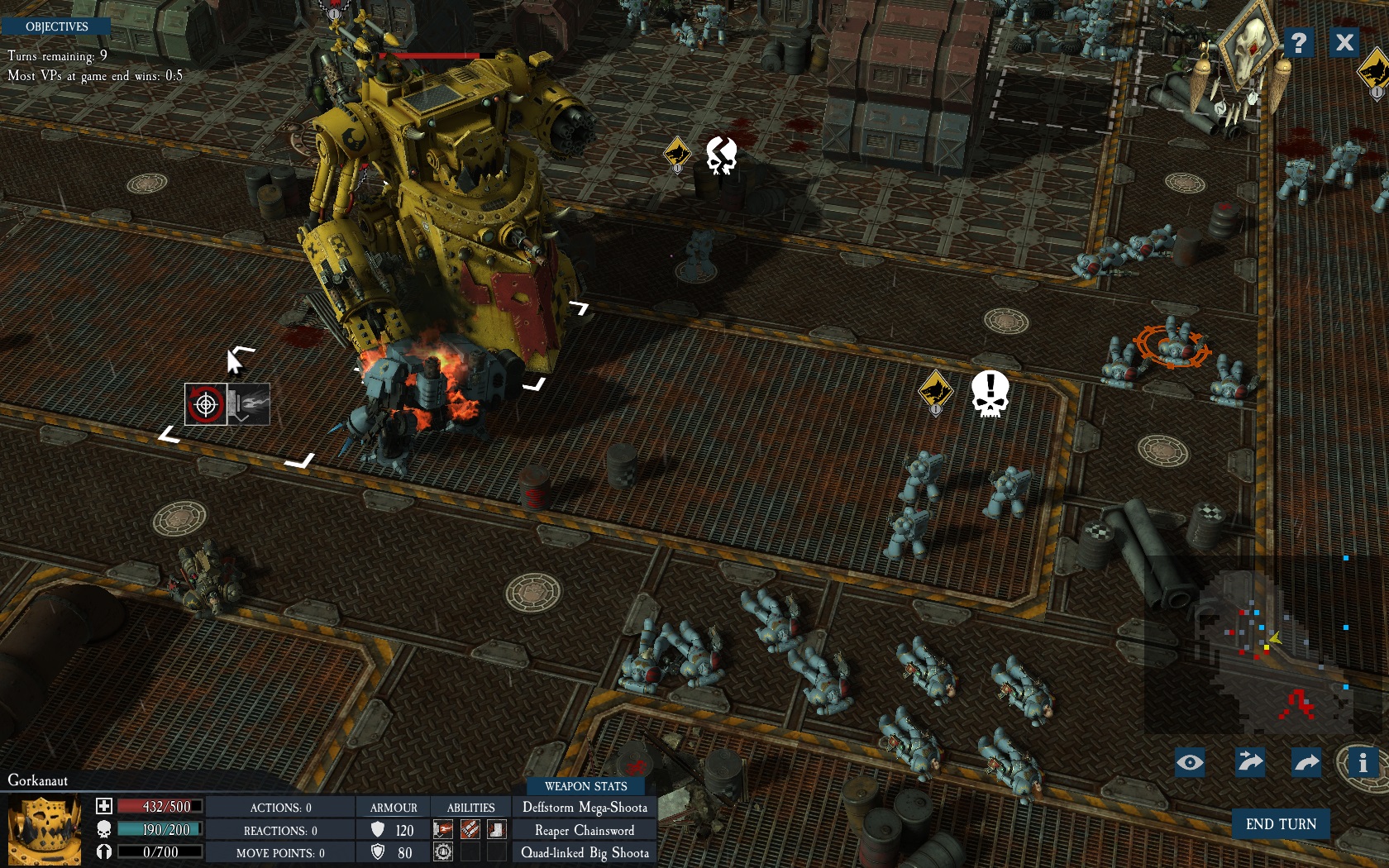 Having a ball; this is a very very enjoyable game. Kudos to the Slith & Stray Space Marines!
Top

hope you even more enjoy the latest patch
Top

What did the latest patch do? Where's the patch notes?
Top

I just encountered him on the second campaign in a Skirmish game. Sadly i think he is far more powerfull then the Knight the Space Marines can field themselves. The thing that makes him overpowered is not, that he can kill a unit with one shot, both of them can, but the amount of bullets with his "precise" aim. It shoots at one target, but with the one hailstorm of bullets can wipe out multiple units at once, cause he misses so much and just kills everything in sight. Ok, if he shoots close to a close combat, he wipes out the orc units too, but that denied me almost half of the XP my units could have gained in that battle

After that thing killed all of my army but my Dreadnought, i ran away with that one and one over time, not a satisfiying victory, but in war its only the victory, that counts

Sadly you think he is far more powerfull then the Knight? Guess you dont like the Orks.

I think its perfect just as is.
Top

Three turns later: I killed almost all SW with this thing alone while my support Orkys were slaughtered. What's not to love? 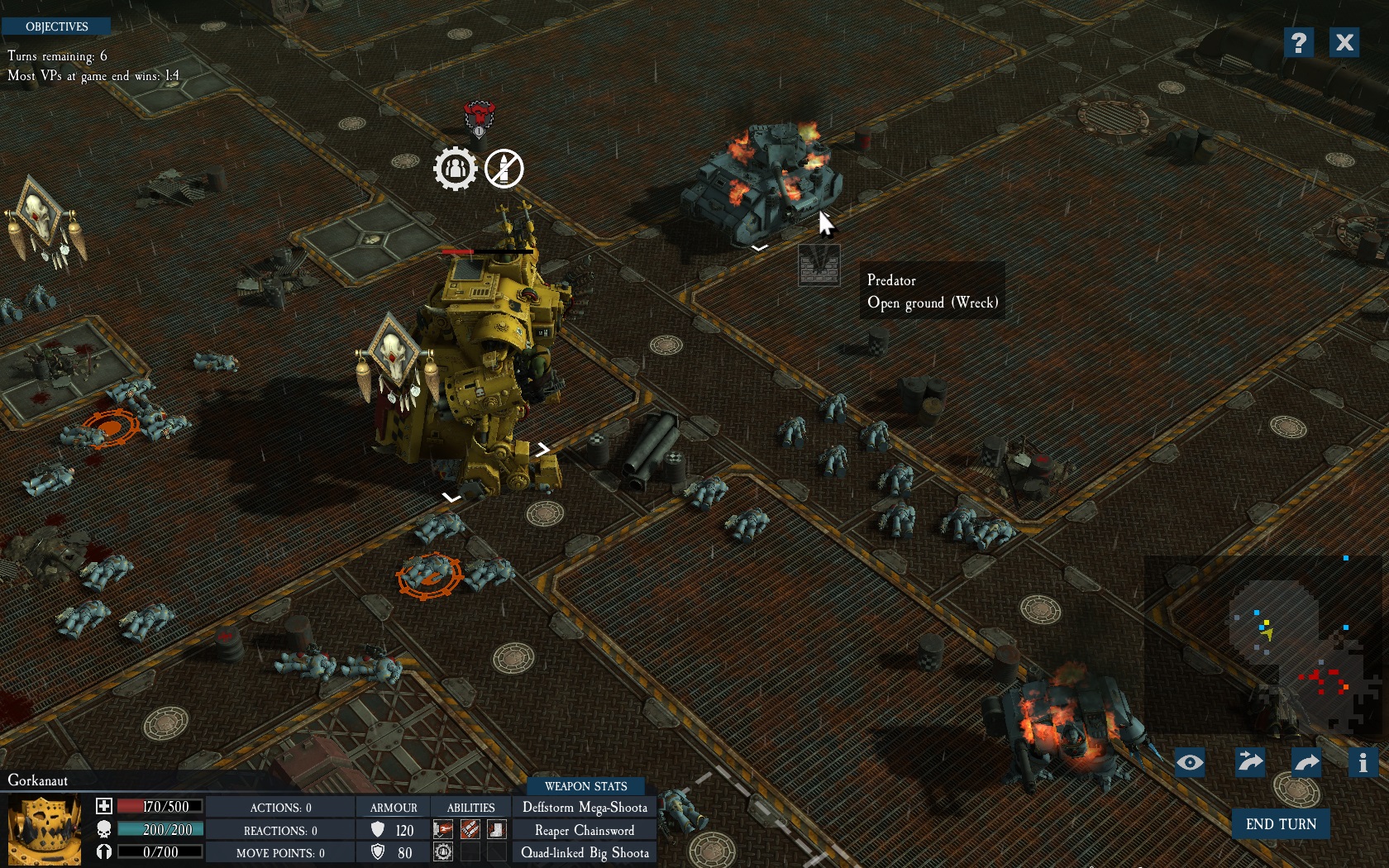 Haven't encountered it from the SW side. Looking forward to it, it's obviously a worthy opponent.

Dizzy_slith wrote:Sadly you think he is far more powerfull then the Knight? Guess you dont like the Orks.

I think its perfect just as is.

He is not. I played with one in MP, and was able to kill one Predator or Dreadnought every single turn with it.
This is not in line with its price, and it should be able to do so with the melee attack, not its minigun.
Top

Hah, I just faced the Gorkanaut in a skirmish for the first time. It was a bit frustrating because of the random forces (all infantry) I was given to face it, none of them were good at AT, except for two meltagun packs. They did not even get close to even take a shot. Hopefully the skirmish set up improves balance wise, I know it is on the v1.02 list.

One thing I noticed was that the Gorkanaut could shoot over/through terrain I thought kept my meltagun packs hidden from LOS. The cover (a tall rock formation) blocked movement and the meltagun's LOS. That did not seem correct. LOS should work both ways. I was trying to get my meltagun packs into positions from which they could pop out from cover, shoot, and then run back to cover to try to wear the Gorkanaut down. Nope, he shot them down right through their cover (and the cover itself was not damaged). Later in the game it seemed to shoot right through a hill. I know it has a height advantage but at least the unit's in the deadspace directly behind the hill should have still be out of LOS.

That minigun cannon sure is a body stacker, even for nearby orks!
Top
Post Reply
8 posts • Page 1 of 1