I wish me a way to port, scenarios, campaigns & units from PzCrps 1 ...

Scenarios & Campaigns: When using PzCrps 2 the same floor tiles as in PzCrps 1 and a "3D map editor" queries these 3D equivalents from a database, then it should still be possible to use the PzCrps1 map files to position the right tiles. As a result, was then transferred a PzCrps1 map in PzCrps 2!

2D-Units: It is predefined, a 3D object with a "canvas" that is filled automatically by the game. The data source to fill correctly the canvas could be the well-known e-file from PzCrps1 ... The (modded) 2D unit icons from PzCrps1 are imported into PzCrps2 and then placed on the canvas.

To imagine what I mean, I show a simple example:

Perhaps it can be portrayed in the game, in correct perspective, even without a framework. 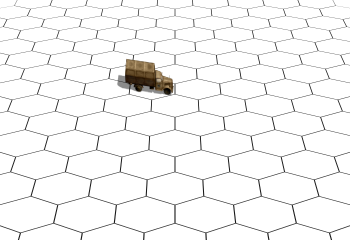 Countless unit icons were created by fans and are not just a replacement of the original unit icons, but they are usually a powerful extension in the e-file. These unofficial extensions can not be considered from the official side. Therefore, this would be a wonderful solution that can also soothe the 3D skeptics because 2D content finds its way into the third dimension.

1. A large part of the already created graphics / units remain valid in the second part - they are simply ported and are immediately available!
2. This idea comes against the modding community very much, which has been specializing in 2D technology.
3. It is implementable relatively well and cheap ...
Top

Of course, just looking to the more that a thousand custom icons in my collection, my opinion would be that I want this to became true!

Interesting experiment. I wonder how a unit will look if aligned to directions of hex sides, and what the animations will look like.

Maps using Panzer Corps 1 tileset should migrate without any problems, but I doubt we can migrate custom tiles in any meaningful way.
Top

In my opinion, there is no need to give ported 2D units six facings just as 3D units will have... I would be more than happy to see old PzCorps 1 "2D" icons move just like they move at present: with only two facings, east and west. Thanks for considering this option!!!

Option 1: The viewing direction / perspective is freely selectable (thanks to rotatable 3D map). The pure 2D units (without 3D scaffolding) have a generally East / West orientation - as already known from PzCrps1. If the 3D battlefield is rotatable, the 2D units would not turn in perspective and always be seen from the same side ... That would remind the effect of something old Super Nintendo games in Mode 7.

Option 1a: When using PzC1 (2D) unit icons will lock the perspective. The 3D battlefield is not rotatable. The zoom function should also be restricted because the resolution of the unit icons is too low. Units are scaled correctly in their size, which stand a little further in the (3D) background.

In option 1 and 1a, it would then be possible to display animations of the units.

Option 2: The 2D unit icons are displayed on a canvas, which is part of a 3D figure ... Then the units shown are not "real" units, but figures like in a table board game - such as chess or " Axis & Allies "!

Then there are no animations from the depicted unit. But the "chess figure" would have some animations.

Difficult quite definitely, but not absolutely impossible ... Perhaps you can create "at home" 3D Tiles in a similar way, like the 2D / 3D Unit icons ... Or you build a connection, to the new and creative 3D possibilities to offer the upcoming update "Windows 10 Creators" from April 2017 ... (For example: "MS Paint 3D" - In the hope that you can paint not only 3D Smeylies.

Otherwise ... Okay, then can not super mods like "DMP Ostfront" imigrate in PzCrp2 ... (because they use many and advanced customized tile sets)
Top

Well, DMP mods are full conversions, even if we make them work somehow, they will most likely still look and work better under the old engine. But I'll give this issue some more thought.
Top

Rudankort wrote: Maps using Panzer Corps 1 tileset should migrate without any problems, but I doubt we can migrate custom tiles in any meaningful way.