So rewatching the vod of the stream, there's a little thing that's been bothering me.

As the rest of the game improves slowly, these raw colored numbers are becoming more of an eye sore. For me at least.

Here is what PZC2 looks like, compared to some other TBS games with floating damage numbers. 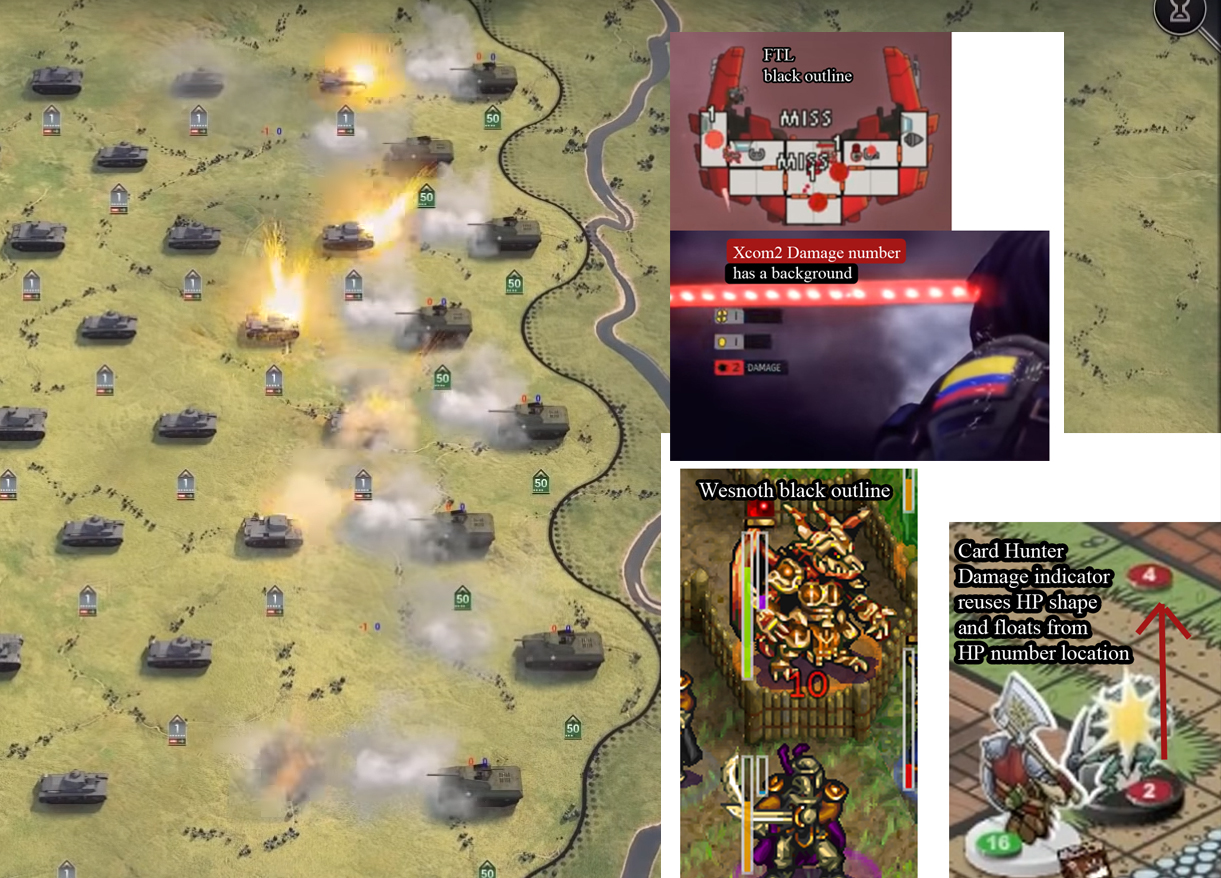 Like look at the 0/0 on the very bottom M10. Its nearly totally invisible.
I guess that's nice for not distracting from how pretty the game is trying to be, but for me, its just too close to 'non functional' for gameplay purposes.

Here's my attempts at improvement. 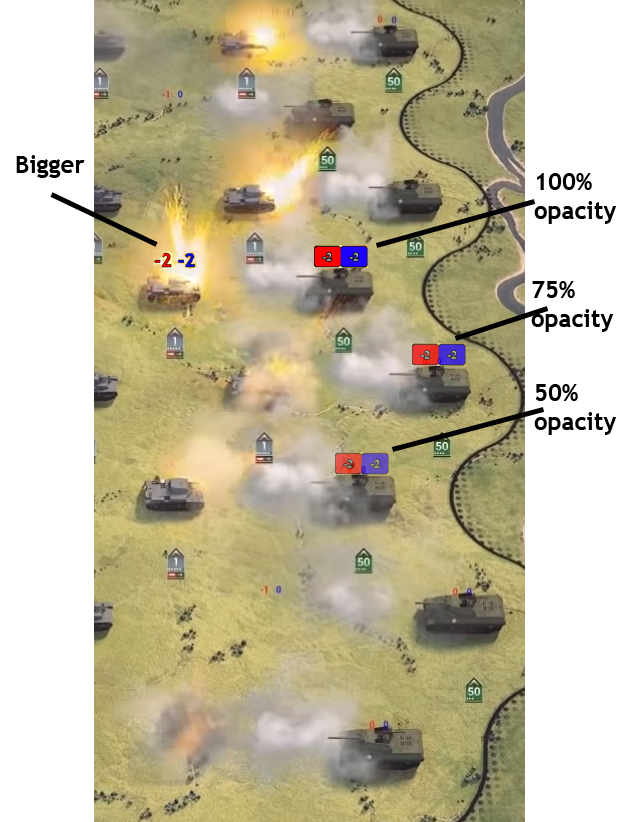 I definitely think the XCOM2 way of putting a background behind the numbers is not going to work for PzC2, it's way too obstructive because unlike xcom2, the camera view here isn't floating around all over the place.
https://www.youtube.com/watch?v=birji_-4r7w

With the camera flying all over the place, it really helps to have super distinct and big backgrounds of reds and yellows, because these numbers could show up anywhere, your eye has to be drawn to it quickly and effectively. Again, not the case at all in Panzer Corps.

The bottom sample of adding black borders to the number is a nice idea, but it just seems to make the exact color of the numbers more difficulty to determine. And it's important to differentiate between red damage and blue suppression.

Perhaps it's just too small, and UI scaling will solve it. Just go bigger. In fact I like this the best I think. Bigger, and with thin black outline. Like you can see over the Panzer 2 tank. Maybe not this big, but definitely bigger than what we currently see on the map.

Maybe someone more art inclined has some ideas or thoughts on this?
Last edited by Kerensky on Wed May 08, 2019 10:11 pm, edited 5 times in total.
Top

by Kerensky » 08 May 2019 21:29
"Like look at the 0/0 on the very bottom M10. Its nearly totally invisible.
I guess that's nice for not distracting from how pretty the game is trying to be, but for me, its just too close to 'non functional' for gameplay purposes".

Your'e on the right track..."Kerensky", I agree with much of what you are driving at!. However...I would alternatively advocate that the 'Damage & Suppression' indicators...instead of being two bright-luminescent boxy-boxes 'On-Top' of the unit Icon...where I think they are somewhat distracting... to instead have two slender columnar-bars at the back of the Unit-Icon...colored Red & Blue in 'which/where' the User can make adjustments to as to the 'Color-Intensity' and also the size...to his satisfaction!.

Also...the 'Numbers' that are indicated...are 'Too-Small' , I like more the 'Size' for the 'Numbers' that you illustrated!. Again...these indicators should be adjustable by the 'User'...as far as Size and Color Intensity/Brightness on the Gaming Screen.

...I forgot to mention...that...initially these two Columnar-Damage-Indicator-Bars could just be all-Black to start with. Then as Damage & Suppression take place, these initially Black-Bars could start to fill in with Color until they are full...to indicate to the player, just how well his units are holding up to action at hand.
Top

Here's another game we can compare to.

However the relevant part is at timestamp 39 seconds.
https://youtu.be/3nEwjqisgGY?t=39

Like Xcom2, they went with full background coloring for damage pop up numbers and even went as far as making bright pink their color of choice for the background. And like Xcom2, they're definitely going for a 'camera spinning and moving all over the place' effect of their game, so I think the same logic applies. Important for that kind of turn based strategy game, but not the best fit for Panzer Corps 2.
Top

On the subject of floating text...

and this is very much just a wish list item not a required feature...

I've replied else where but didn't realise this was your main post so ..

Yep, I agree with you.
Numbers are very hard to see in the heat of the battle.
I think they should be improved, by adding a background or bigger numbers... I dont know. I trust Alex will find a suitable solution for this

Akkula wrote: ↑
Thu May 09, 2019 9:21 pm
Yep, I agree with you.
Numbers are very hard to see in the heat of the battle.
I think they should be improved, by adding a background or bigger numbers... I dont know. I trust Alex will find a suitable solution for this

It most certainly will not be me personally, but I'm sure Patrick Ward will come and rescue us all from unreadable damage numbers.

Then in Patrick we trust

I am really excited about this game, since last days in which I was re playing my mod my excitement for PzC2 went higher than ever

Glad to see some action here on the PzC2 subforum since the gameplay twitch session...