Well the good match-ups couldn’t last forever could they? Game 3 saw the paint and feathers of the Aztecs against the clanking mass of armour that was the Medieval Swedish Army run by Dave Ruddock.

Dave’s list was light on generals so I figured if I hit him in multiple places I might be able to break through. As in the previous 3 games my opponent won initiative and chose Agricultural. I went for maximum terrain again – some of which fell kindly – but most of it was on Dave’s half of the table and he was able to advance through it.

I moved first so I hoped to push forward on my right as quickly as possible.

I had a very simple plan. Charge in piecemeal with more BGs lined up to deliver subsequent charges. Losing vs Impact Foot is 3 minuses on cohesion – 4 if you are near the table edge. 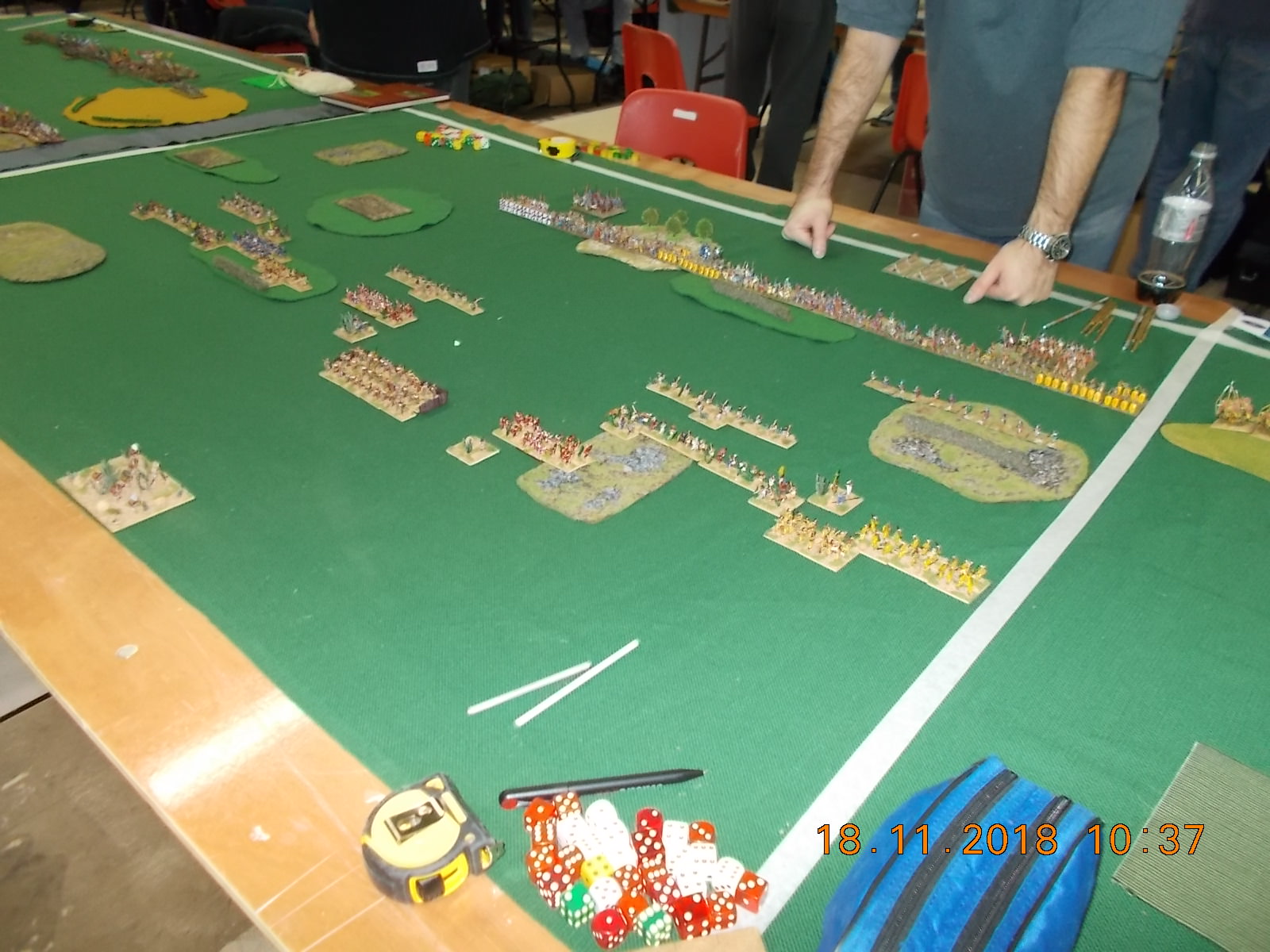 Dave used his LF to good effect to slow my right hand attack. I held back behind my FF and tried to stay in terrain wherever possible. On reflection the Swedes are actually very good in terrain as well since the rear rank are MF and will not count disordered.

This is me teeing up the first punch. The Superiors will hit 2 enemy BGs. On either side are the Average and Elite BGs who will deliver the 2nd charge. 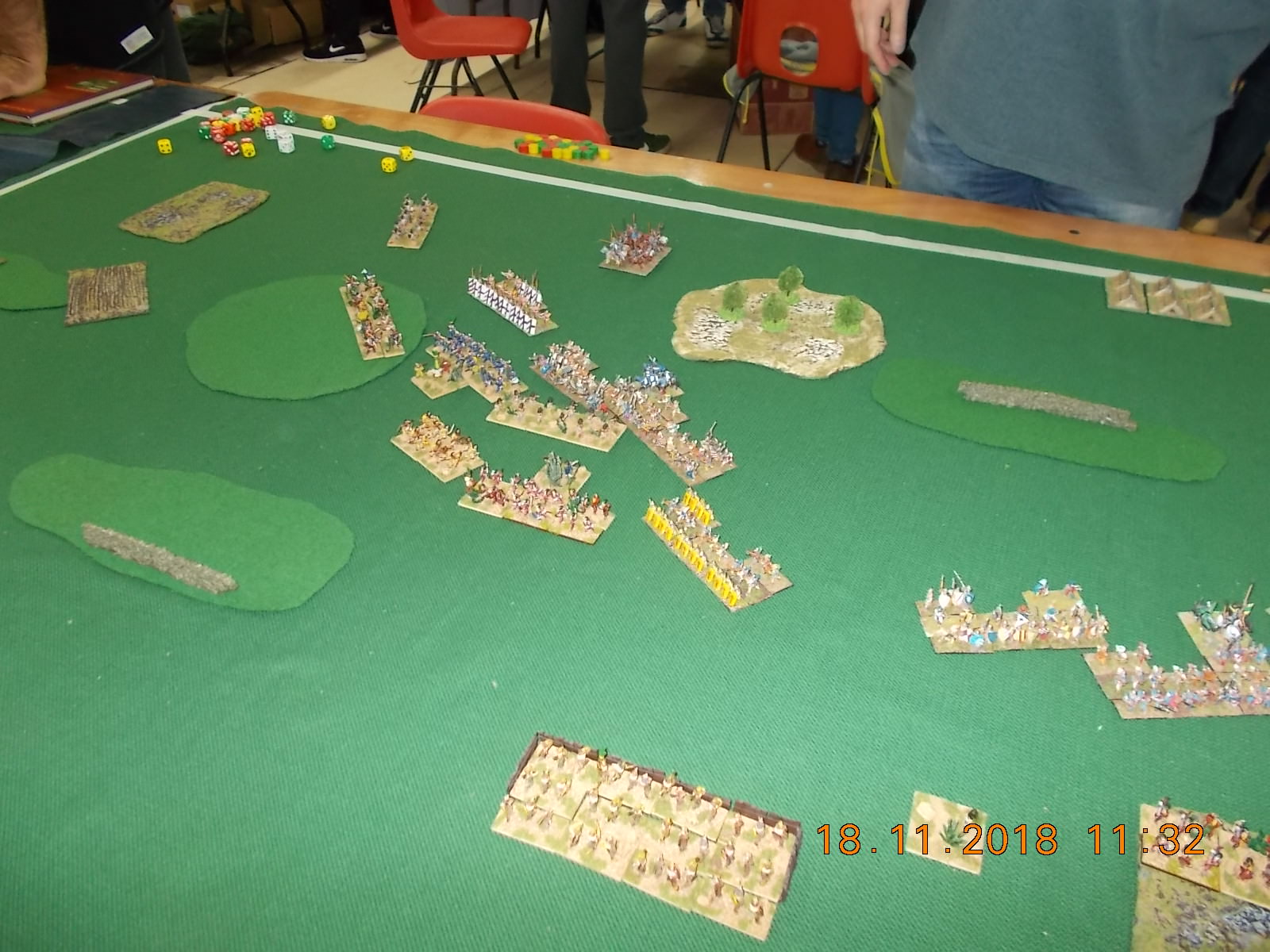 And this is the high point of the game for the Aztecs. On the left both enemy BGs are disrupted with 2 new charges to come. On the right the flank BG has fragmented and will break when charged by the Elites. 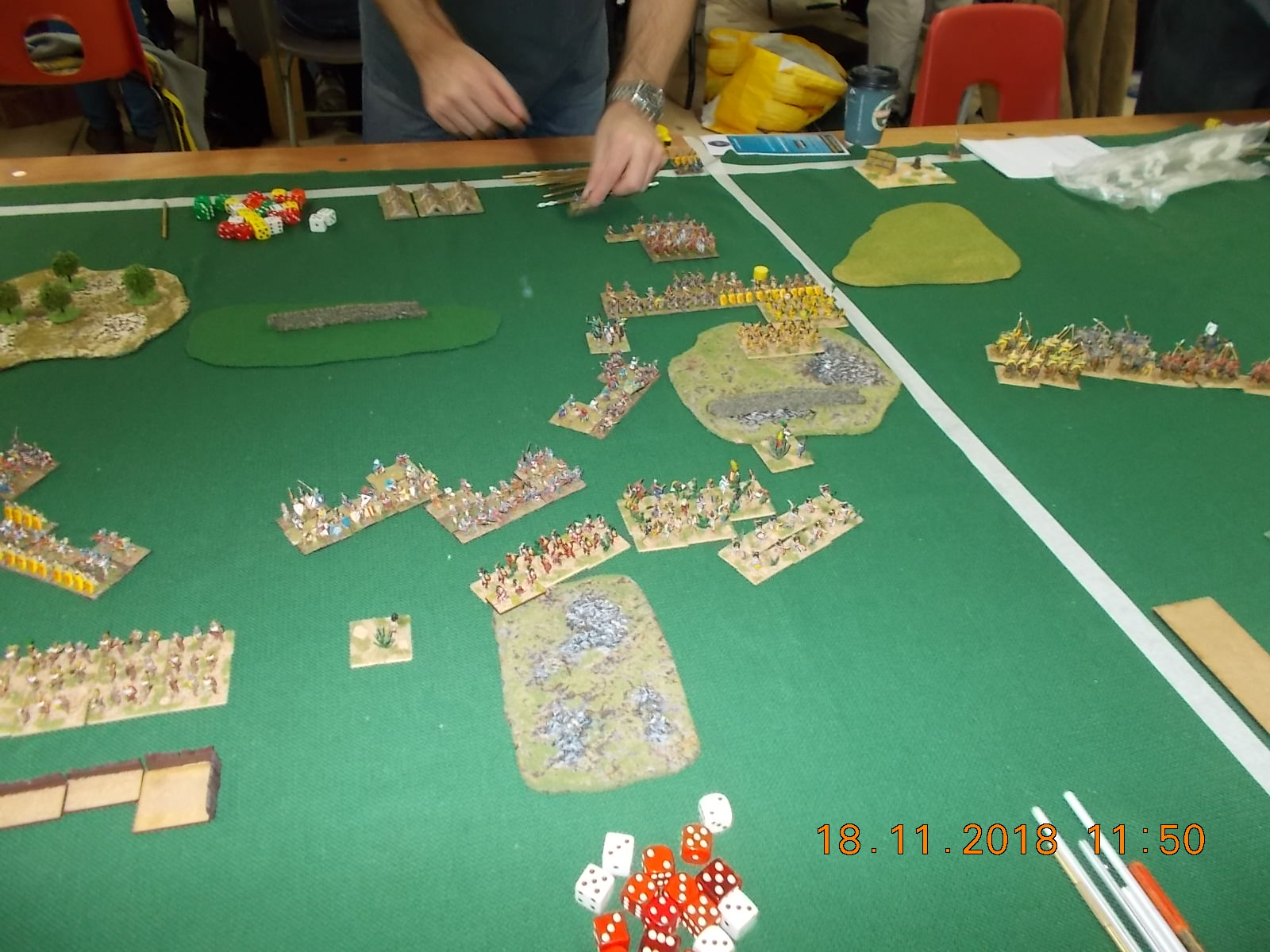 The Eagle Knights have advanced out of the FF to threaten one or both of the exposed flanks. 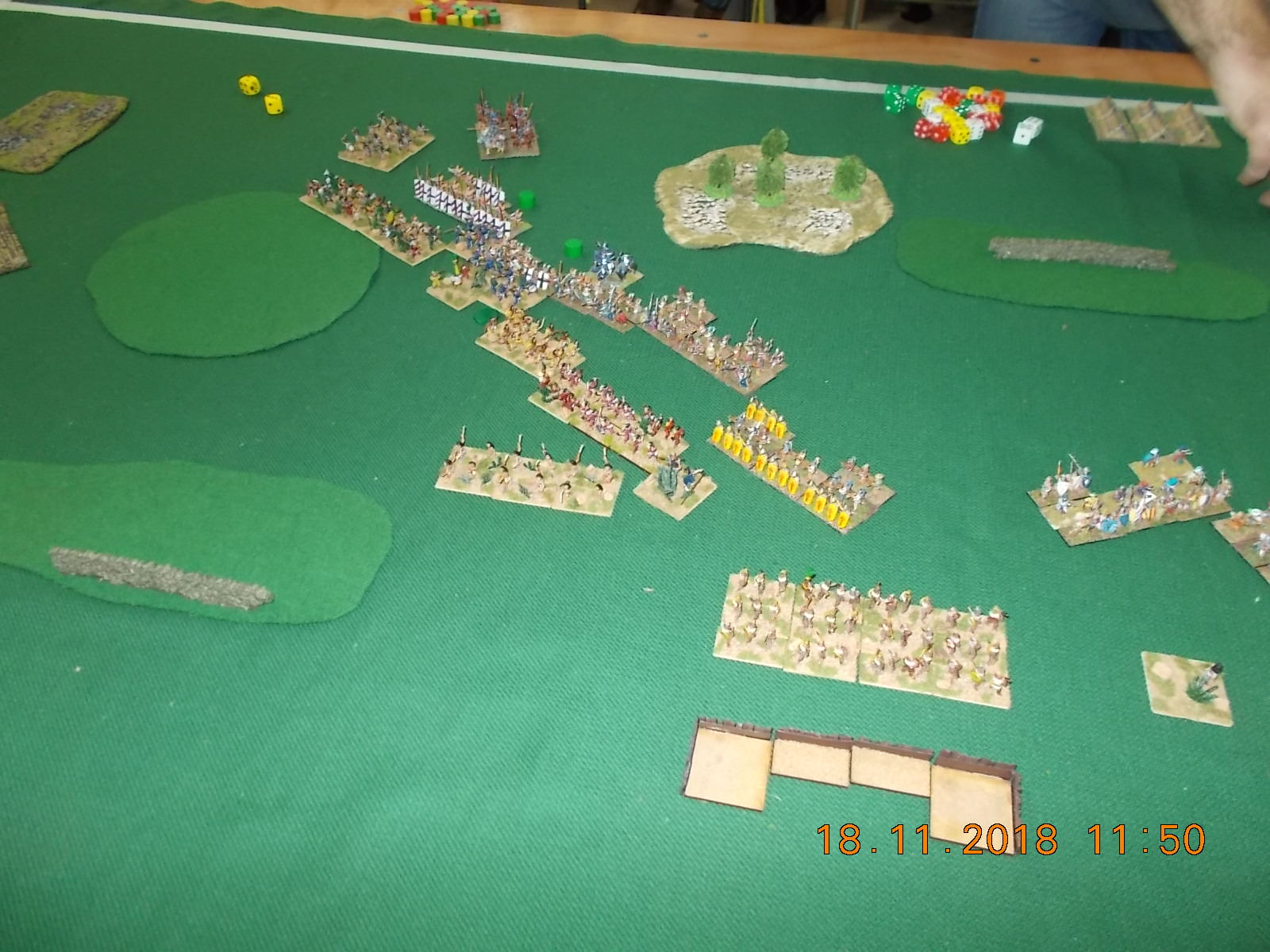 And then disaster happens! The lead Eagle Knights are disrupted by Xbow shooting. They then fail their test not to charge and lose the impact to fragment. The other charges also fail to dent the Swedish cohesion. The same happens on the right flank too. 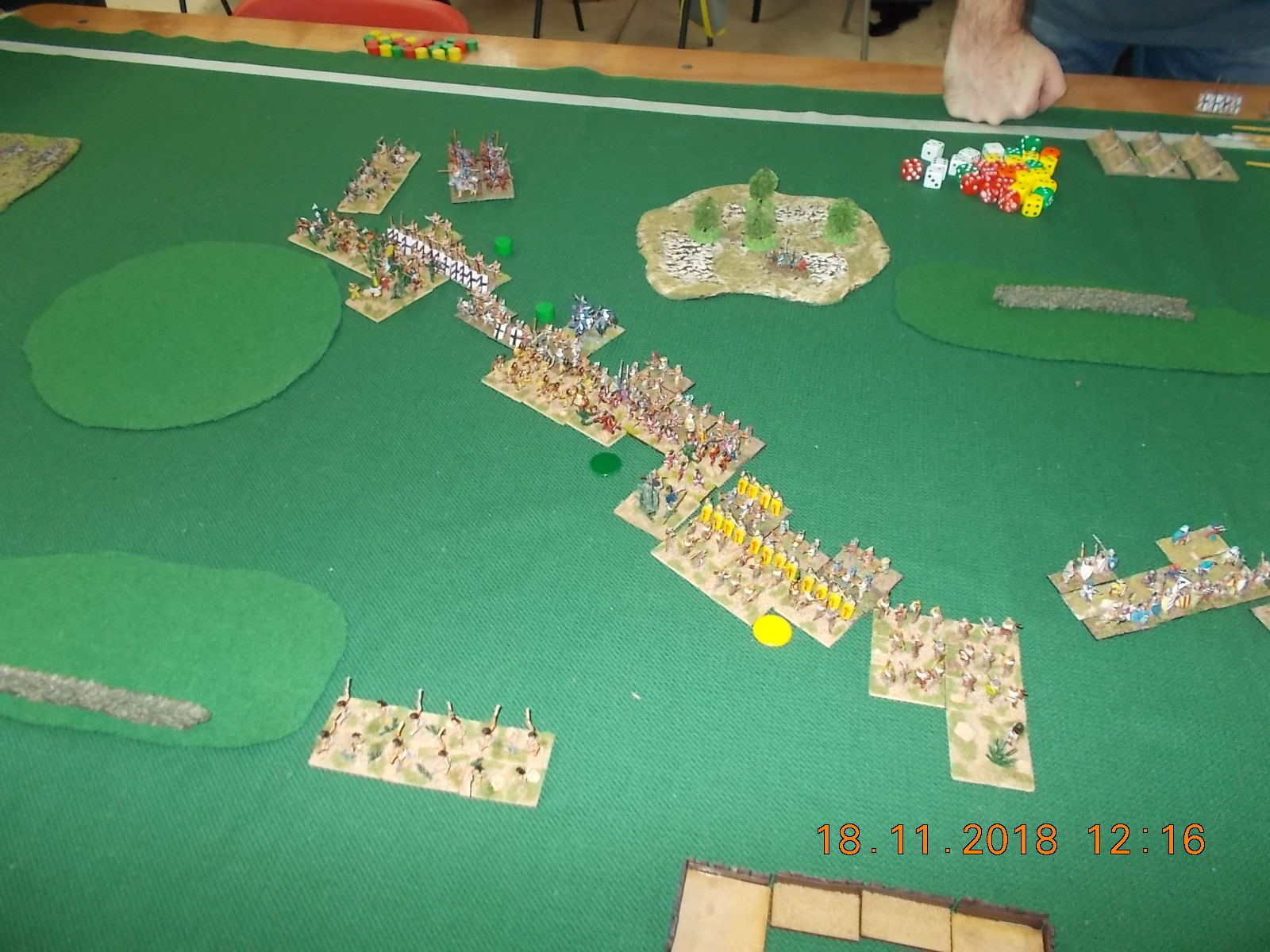 With all of the Swedes on plus and all of the Aztecs on minus it becomes a one-sided war of attrition. There is a brief glimmer of hope when the 2nd BG of Eagle Knights delivers a flank charge to sweep away a Swede BG but it is all too little too late.

The Aztecs collapsed and the game ends 29-12. Dave will go on to win the tournament so not too shabby. Just the last game to go and still in with a chance of a podium finish.

With the benefit of hindsight there are several things I should have done differently. The first was deployment. Dave’s weak point was his left flank because of the extra minus for the table edge on cohesion tests. The core Aztecs should have been there to better exploit the initial break through. As it was I only had the 4 base BG of Elites who having failed to win at impact were ground down through base loss.

And I should have delayed my attacks elsewhere until the LF had tempted the Knights away – that extra plus for rear support makes all the difference.
Pete
Top
Post Reply
1 post • Page 1 of 1