Britcon was any list from Book 1 so I expected to see quite a lot of Successor & Roman armies and I was not disappointed.

I won initiative and elected for Agricultural which included a Coast to reduce the table size. The Indians are typically linear and my last batch were my cavalry and I think Chad was a little discomforted to see so many quality cavalry on my right flank. My left flank was anchored on the coast with Thracians in an enclosed field linking with the cavalry wing. 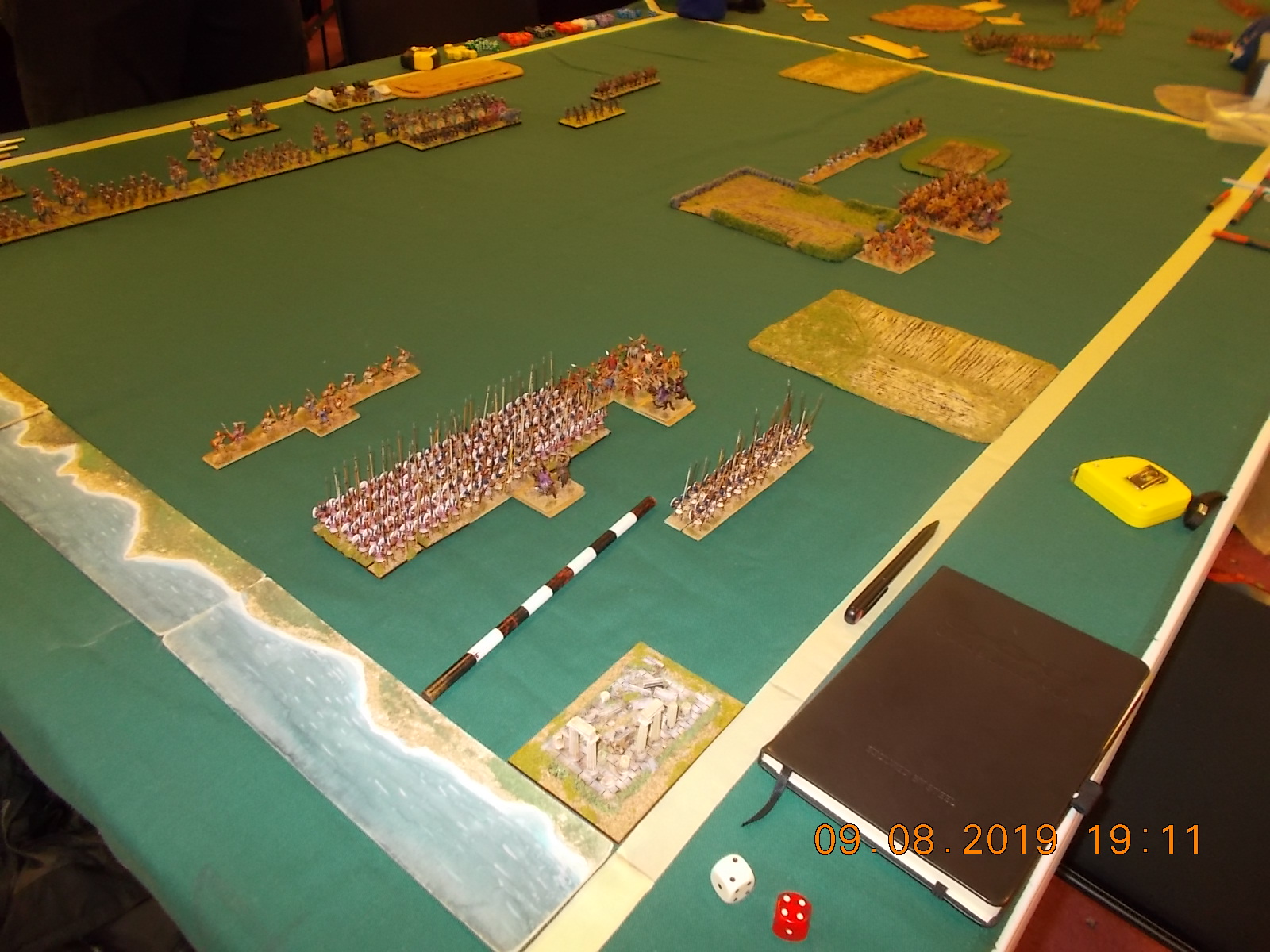 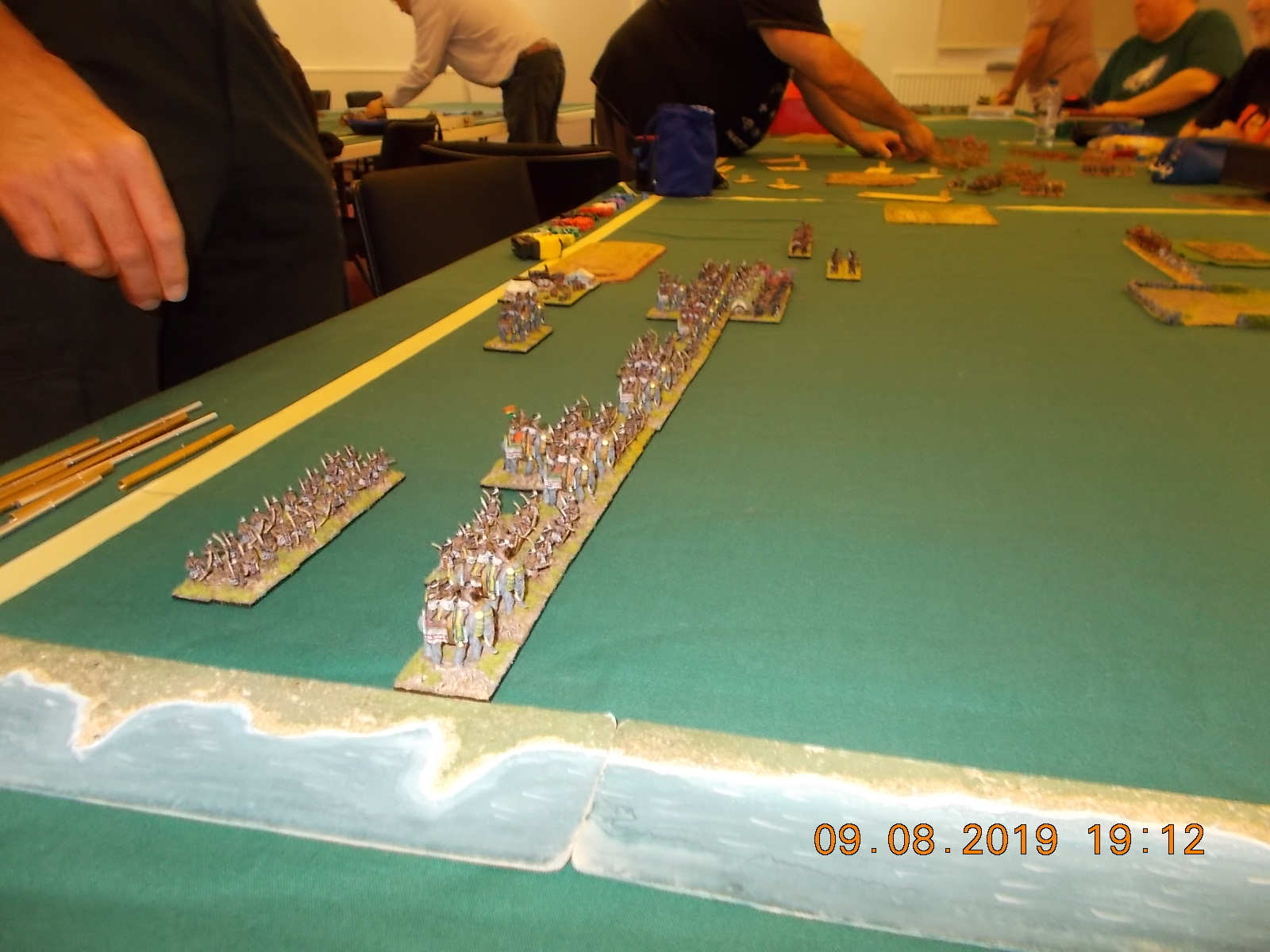 I moved first and attacked on both flanks whilst holding back in the centre. 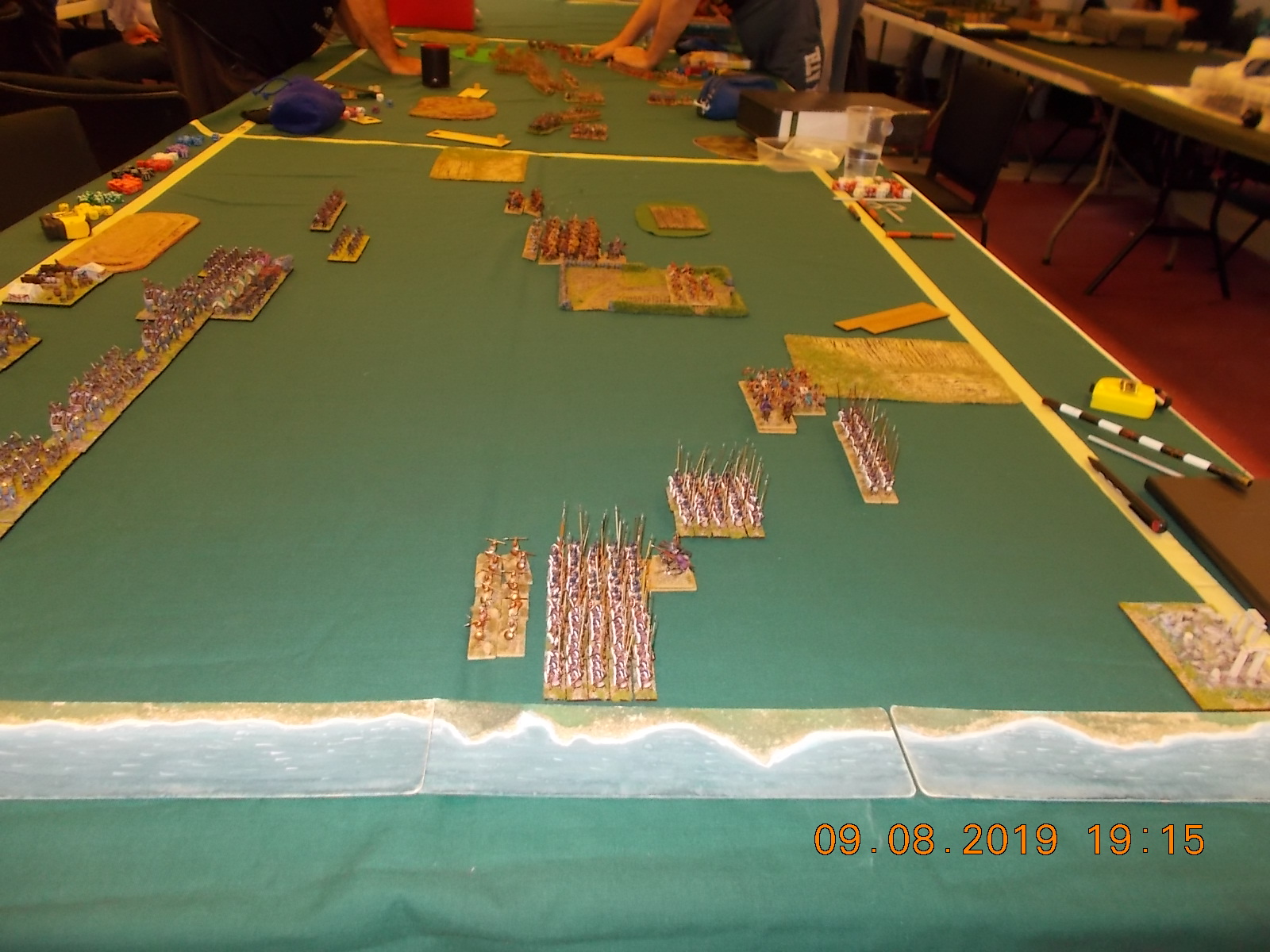 The LF slingers & Thracian LH combined well to shoot off a base of the opposing Indian cavalry.

Chad started to move some Elephants across to counter my cavalry whilst moving his Chariots into the centre. 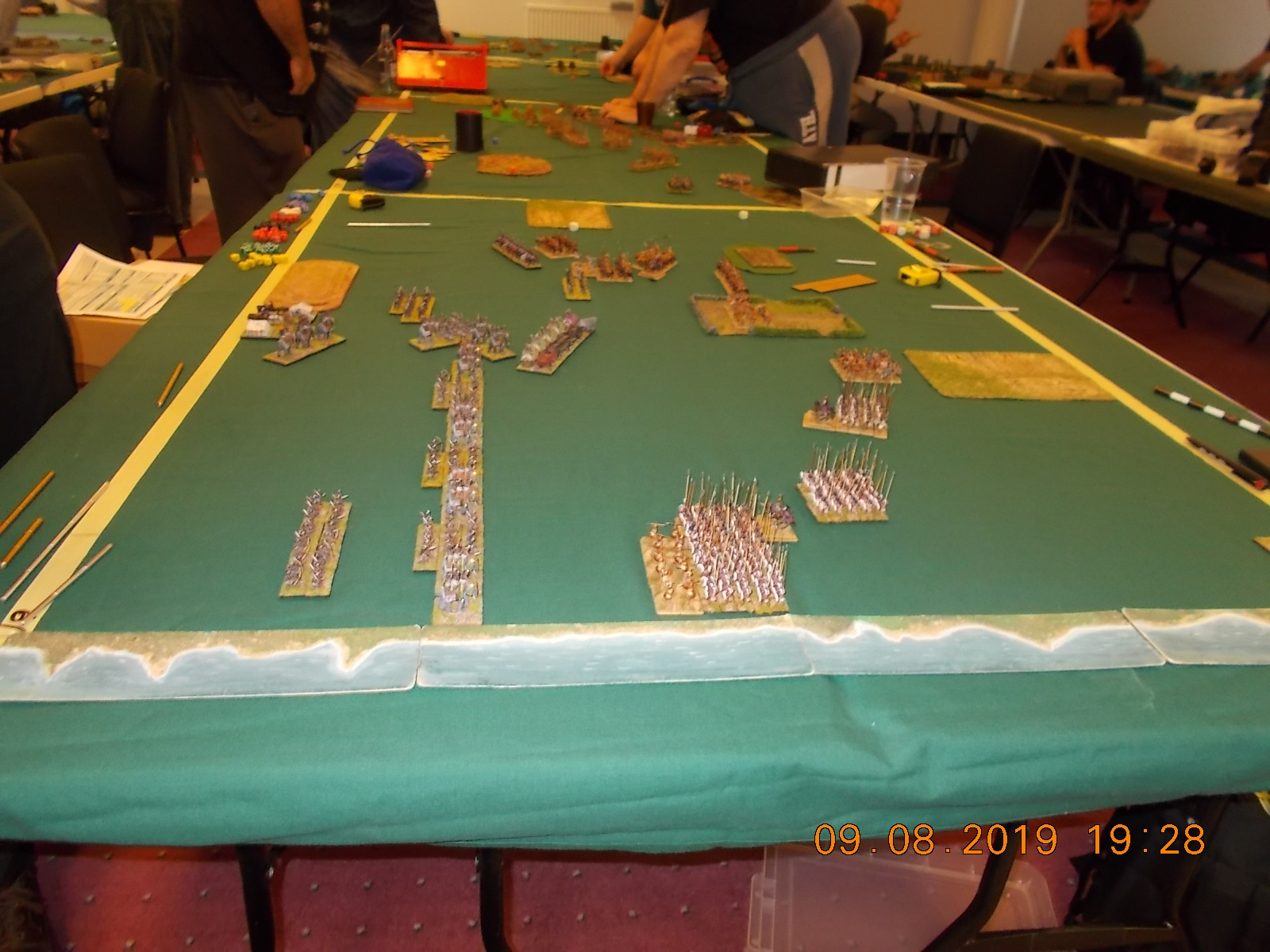 Chad’s flank was under pressure and I pushed the Thracian MF forward to engage an Elephant BG. The other MF BG headed for the safety of the field as the chariots got closer. On my left my Sup Pike were making a bee line for the Elephants and archers with the other pike in echelon behind. Chad was trying to bring to bring his archery to bear and a couple of my BGs went disrupted.

The Thracians hit the Elephants and expanded into the archers alongside. On the left the Sup Pike hit the elephants and archers. 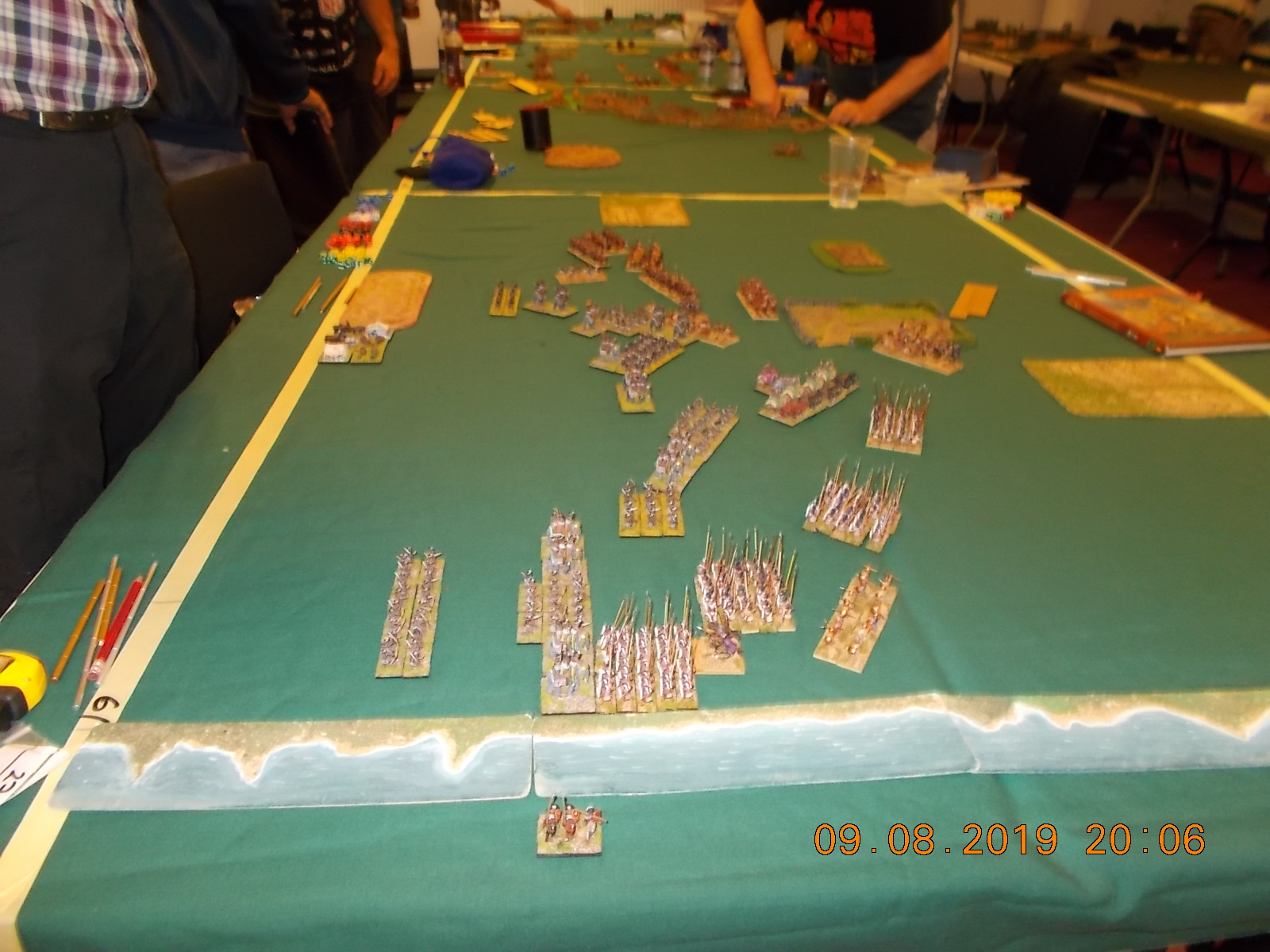 Chad was unlucky with death rolls and after the melee round both Elephant BGs had lost a base and were routing. On my right Chad’s MF Jav BG disrupted and was then burst through by a routing elephant. Despite repeated efforts Chad would be unable to rally them for the remainder of the game. 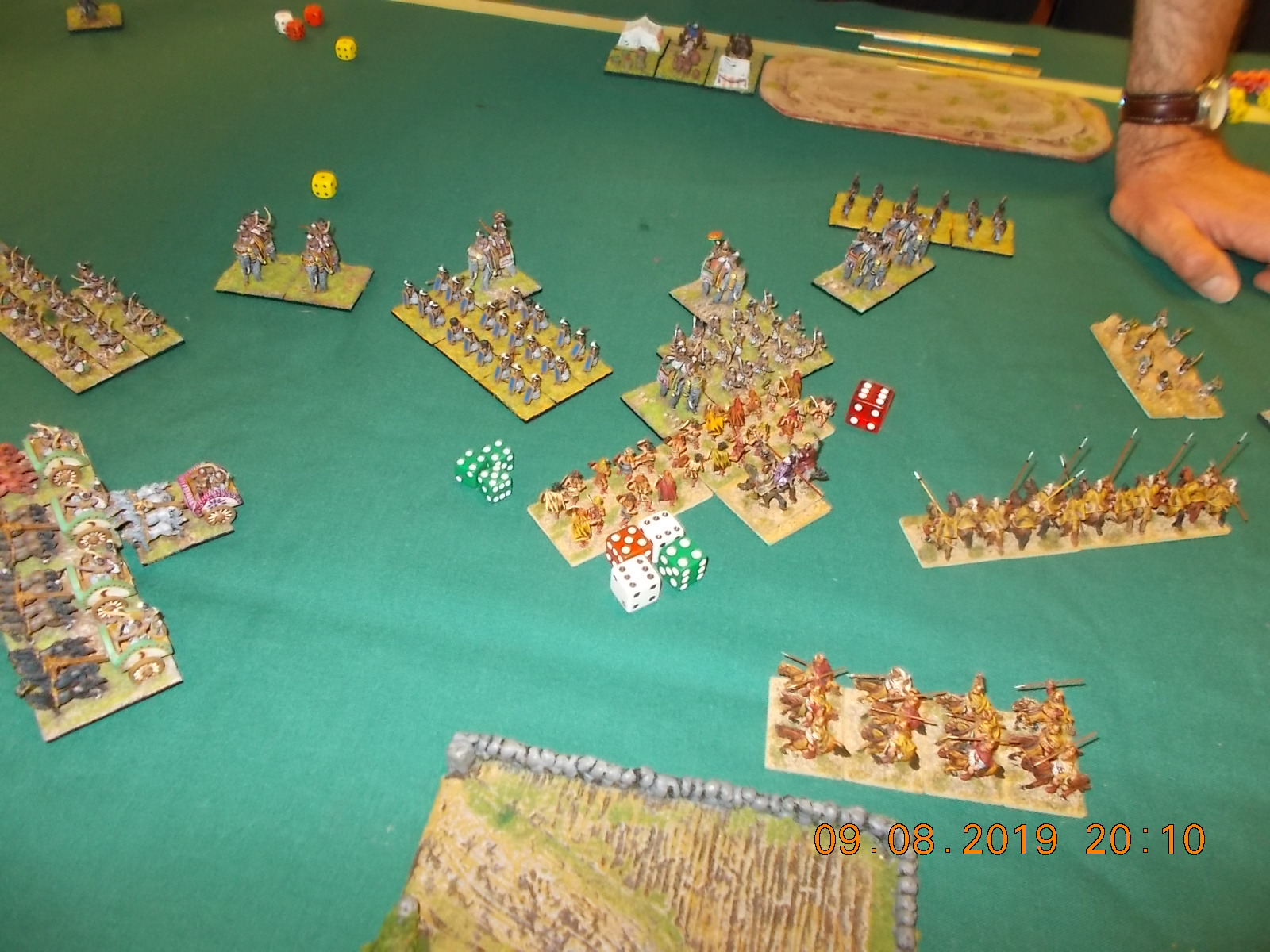 The Chariots decided they wished to charge before their bow fire had any effect and promptly lost a base at impact. 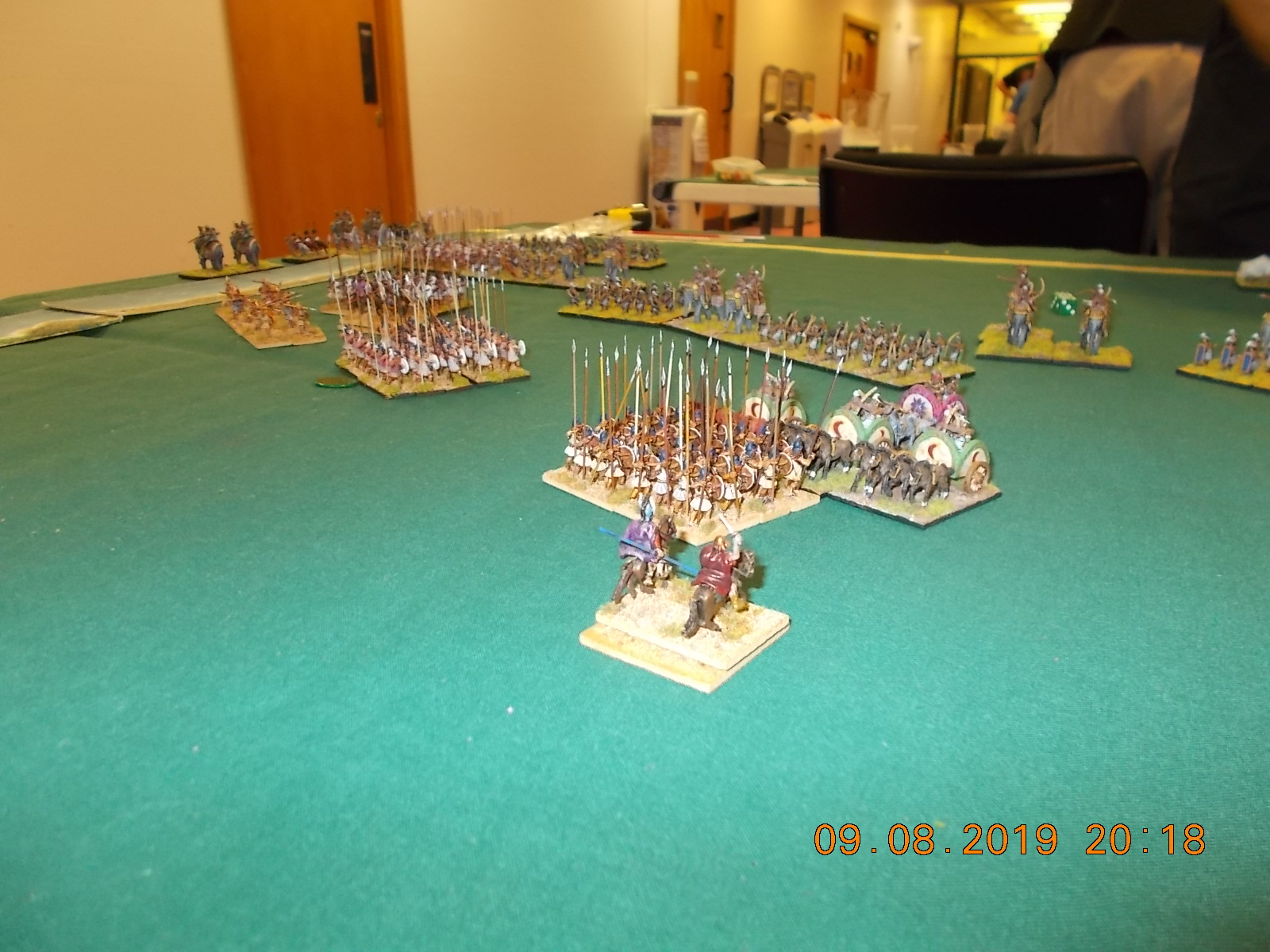 Unfortunately for me the remaining 3 chariots delivered 5 hits in the melee and the pikes disrupted. In the following round they dropped to fragmented even though help was almost at hand. 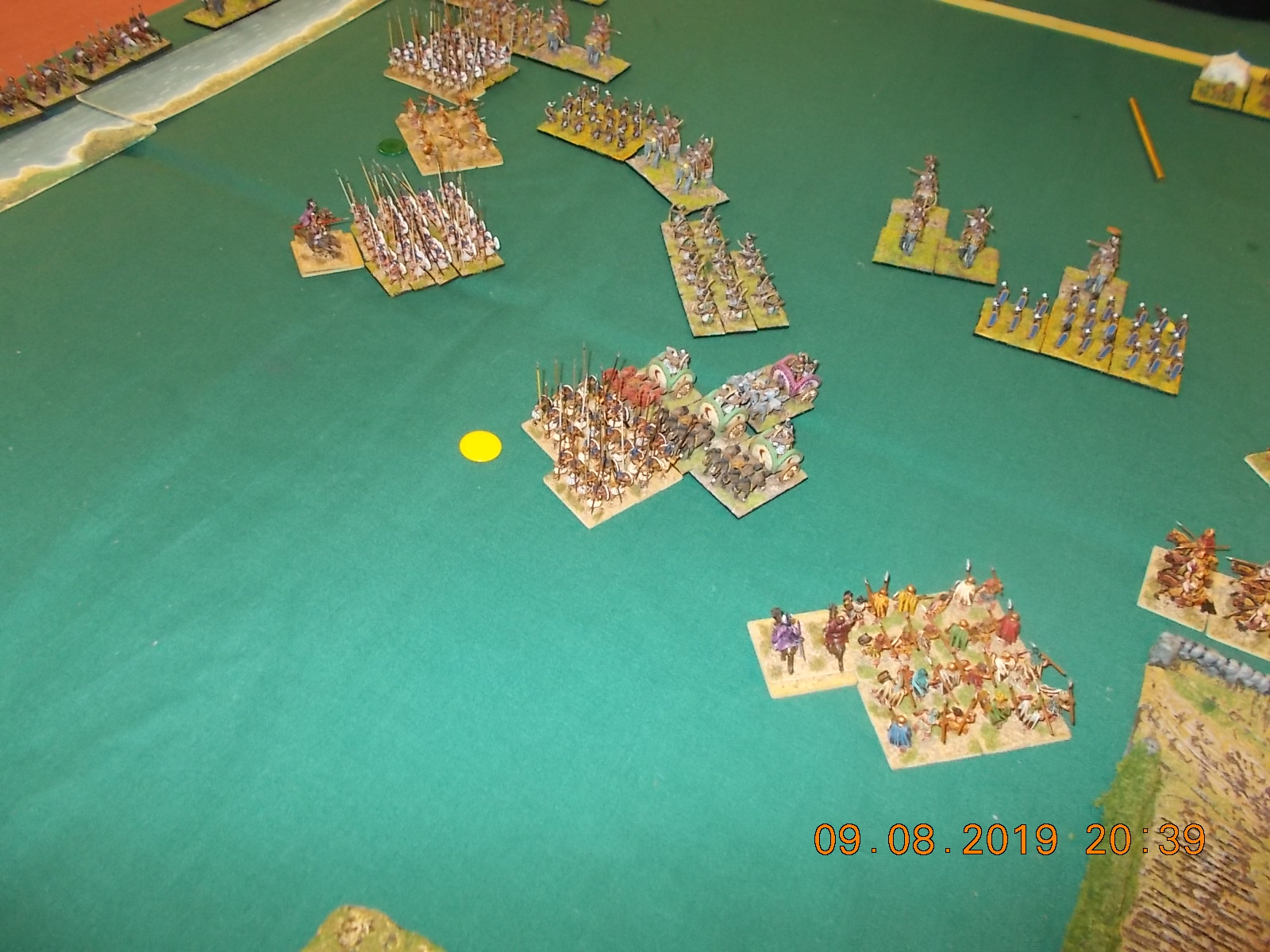 Back on my left and the Superior Pikes kept going to hit another BG of archers. 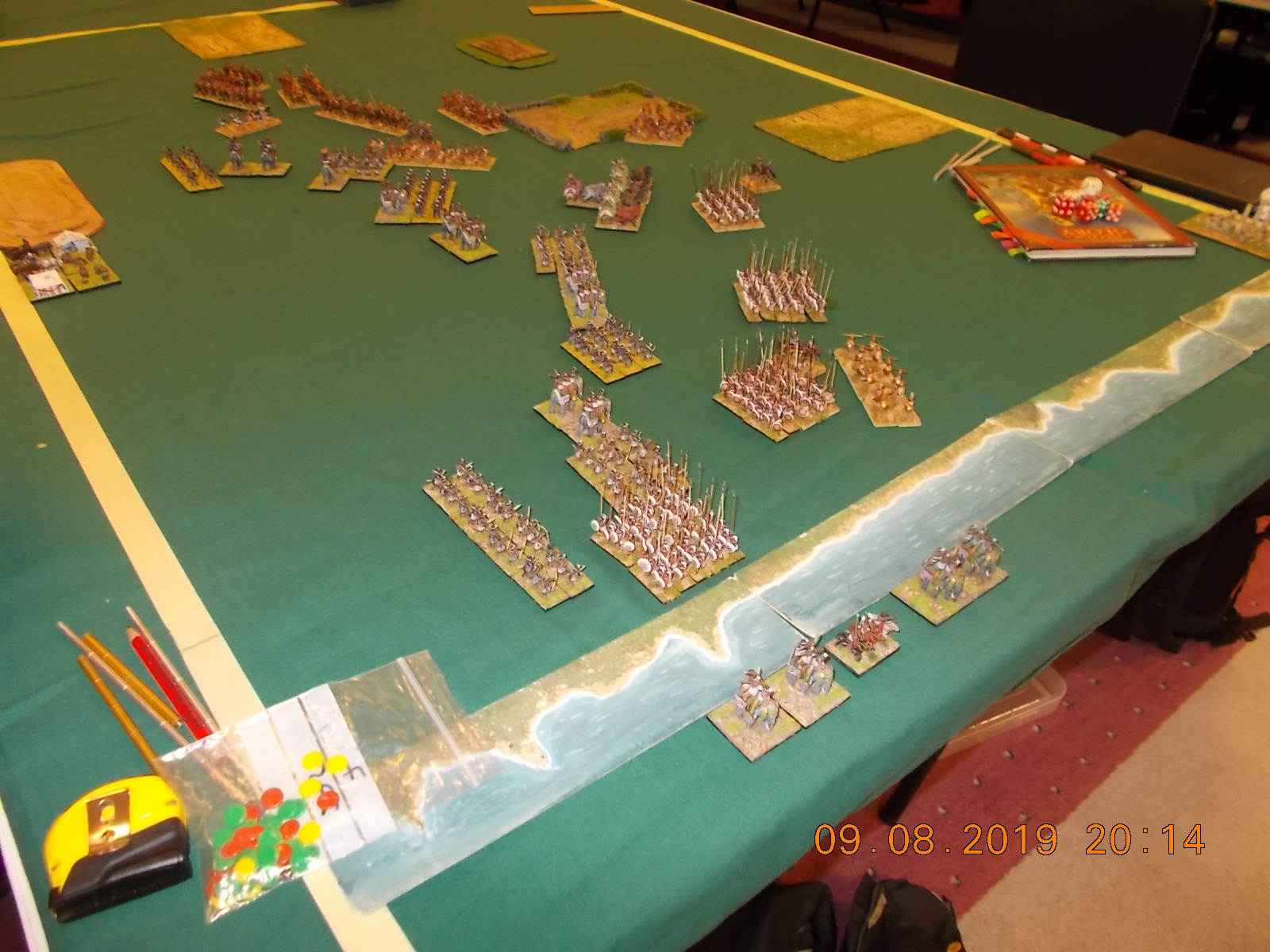 The supporting pikes also hit home and Chad’s flank was disintegrating. 4 BGs had been removed or were in rout with another fragmented due to being shot down by the LF. 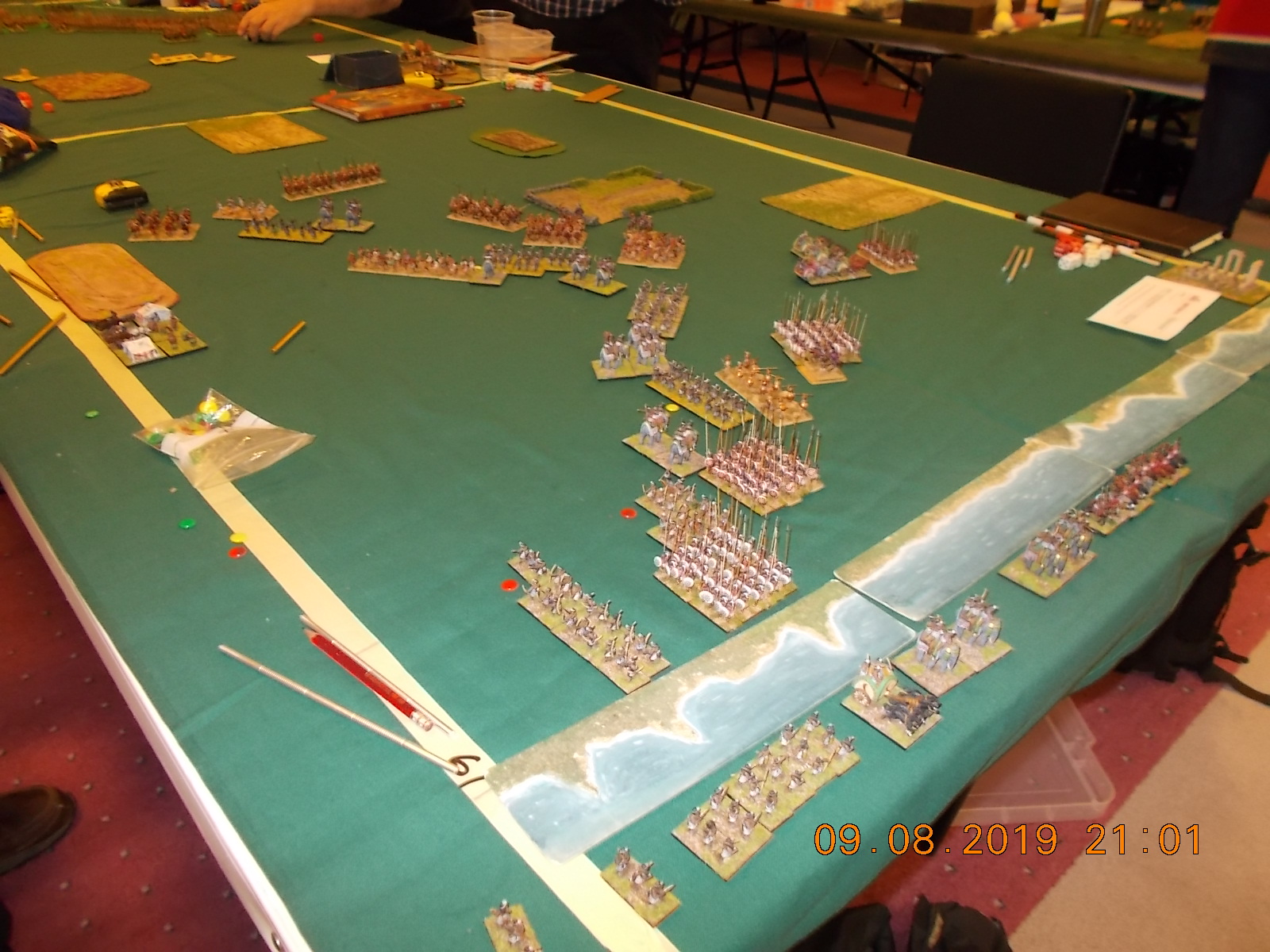 The game is now almost over. The Thessalians are poised to charge the fragmented MF whilst the Indian cavalry and LF have also been routed. The Elephant BG is effectively surrounded and neutralised. A very similar situation will occur in game 6. 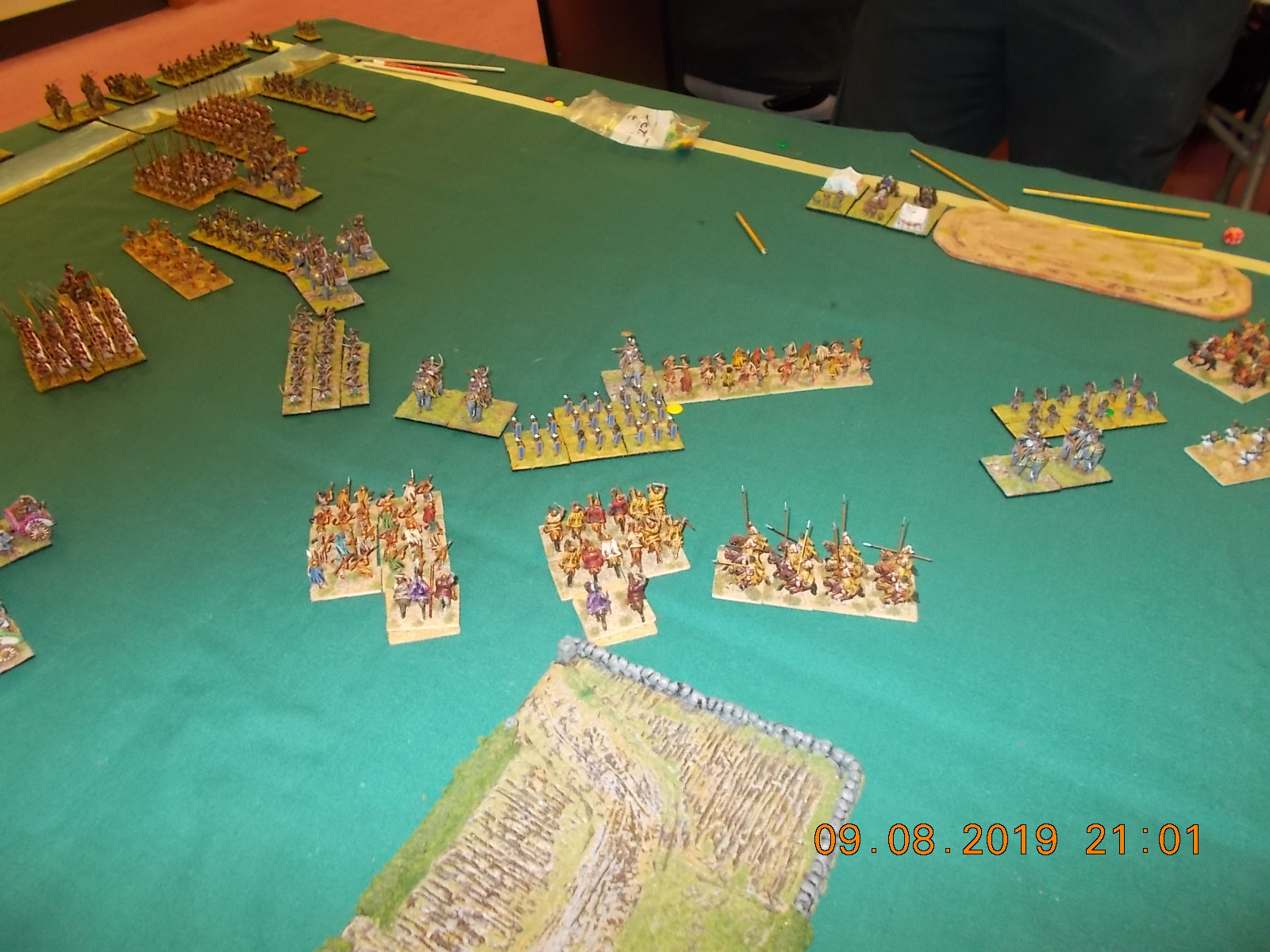 At game’s end I had lost another BG to fragmented and I think the score is 32-6 so a vey good start to the weekend. Elephants in 2’s are still very fragile but more effective in 3’s if permitted. Tactically this was probably my best game of the weekend as you will see later.
Pete
Top

Re: Britcon 2019 Game 1 vs Classical Indians

Thanks for the write up Pete - it was a harsh introduction to the Indians and elephants in general for me! I surely lamented not taking the elephants in 3s, as at multiple points over the weekend elephant BGs went *pop* as if they were balloons thanks to my propensity for rolling 1s on the death rolls. One observation slightly in favour of 2s though is that at least the damage they do when routing is reduced as they are removed after their second rout - in my game against the other Classical Indian army I broke two BGs of 3 base elephants, and they carried on careering right through to the baggage, through some battle wagons stationed to protect it! But yes, if I did it again, 3s it would be.

In this game I was surprised at how much cavalry you'd bought and tried in vain to get elephants and archers over to that flank, but ended up with an almighty traffic jam through which the afforementioned elephant balloons rampaged catastrophically.

With respect to the archers, I think I would still take them as protected without swords, since in the games I had swords would have brought little extra compared to being protected (armoured skilled sword legionaries, pikes, protected impact sword), and in the one shooting match I had my protected vs my opponent's unprotected was very useful. I do take the point that swords would be useful against cats and other heavily armoured opponents though.

All in all a very enjoyable weekend, notwithstanding the steep learning curve!
Top
Post Reply
2 posts • Page 1 of 1