It’s Saturday morning and I’m up against Steve Brown of Plymouth using Lysimachid Early Successor. Steve is a very good player and ahead of me in the rankings going into the weekend.

I won initiative and went for Agricultural again. For an army with 8 pike BGs Steve picked quite a bit of terrain and a gulley and a gentle hill would fall kindly for me.

The gulley looked to be a good place to anchor my pikes and I placed the Thessalians in ambush. I figured that the ambush would be triggered by skirmishers or MF and that they should be able to hold their own against them. Deployment looks like this: 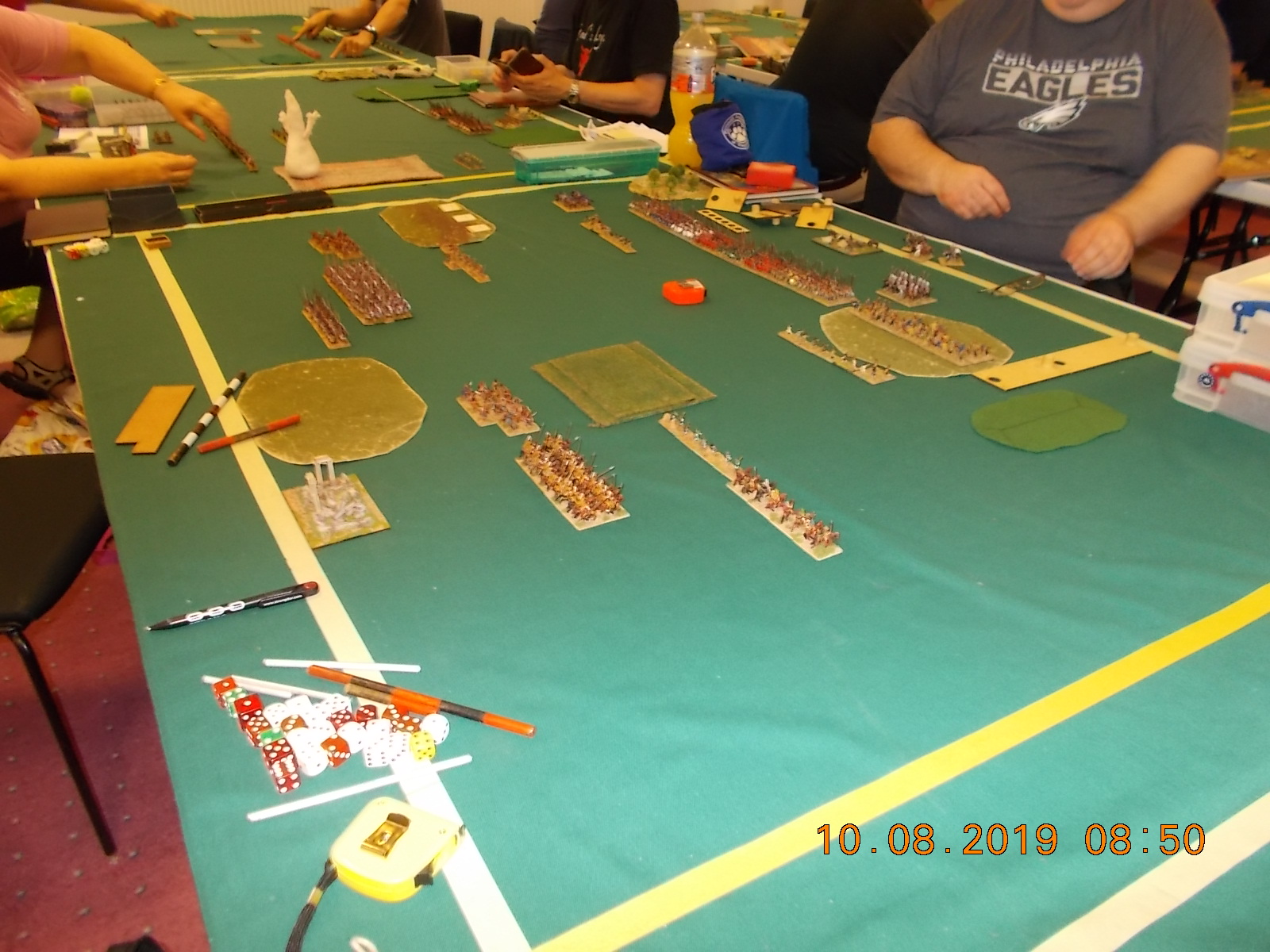 Steve reckoned that the 3rd Ambush marker would be the real one and he chose correctly. Interestingly the ambush is only revealed when the enemy come within 1 MU – visibility of troops outside the gulley. I elected to place my bases at the very rear of the ambush marker which placed them out of sight and therefore out of shooting of the LH. It is an interesting anomaly but as far as I could tell we played it correctly. 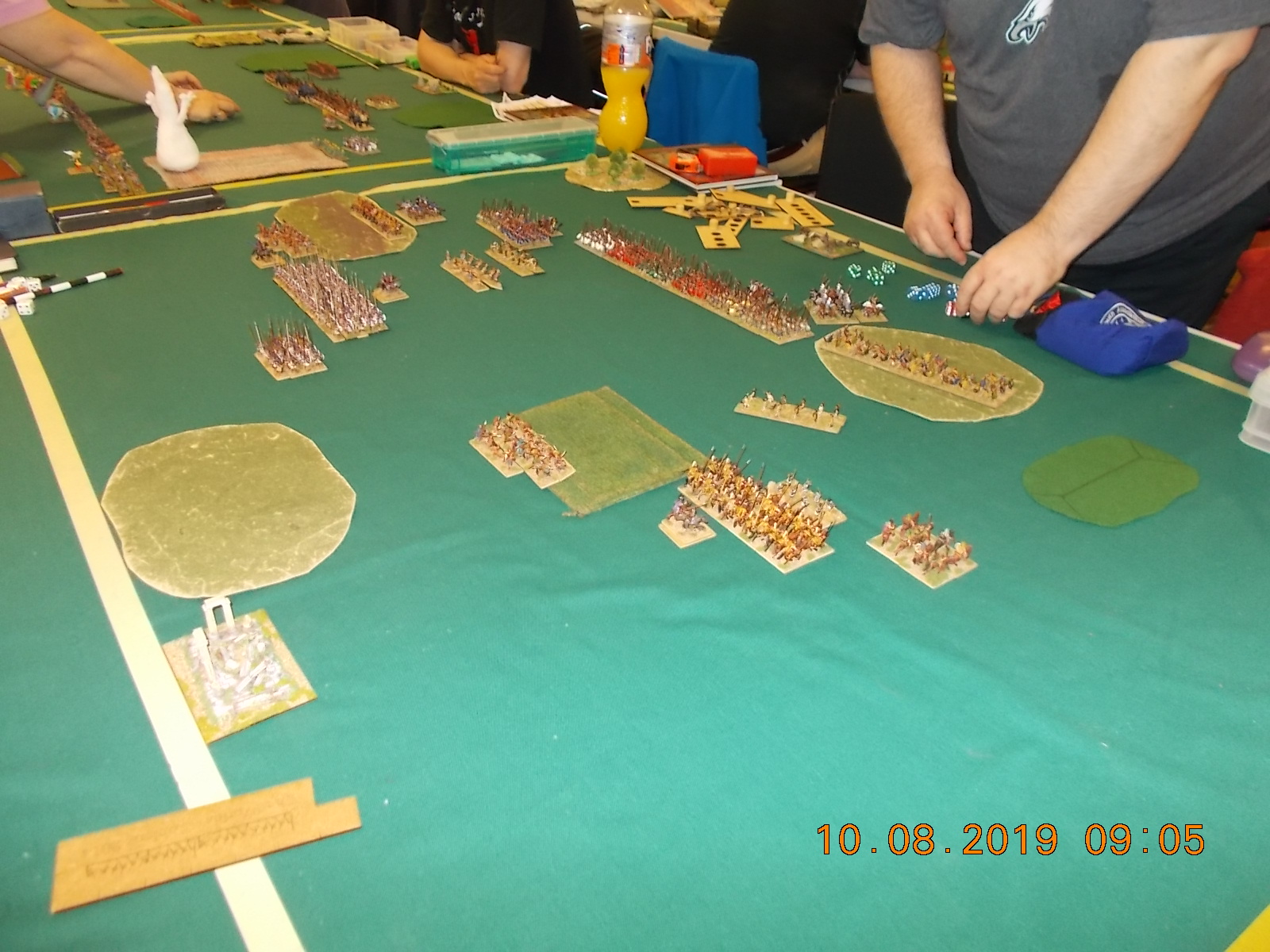 My Thracians were moving up to occupy the gulley and I could see that the LF vs LF interaction would be quite important so chose to charge. It’s a 50/50 combat and with the IC’s encouragement and some jammy dice my LF routed their opposite numbers although they lost 2 bases in the process. 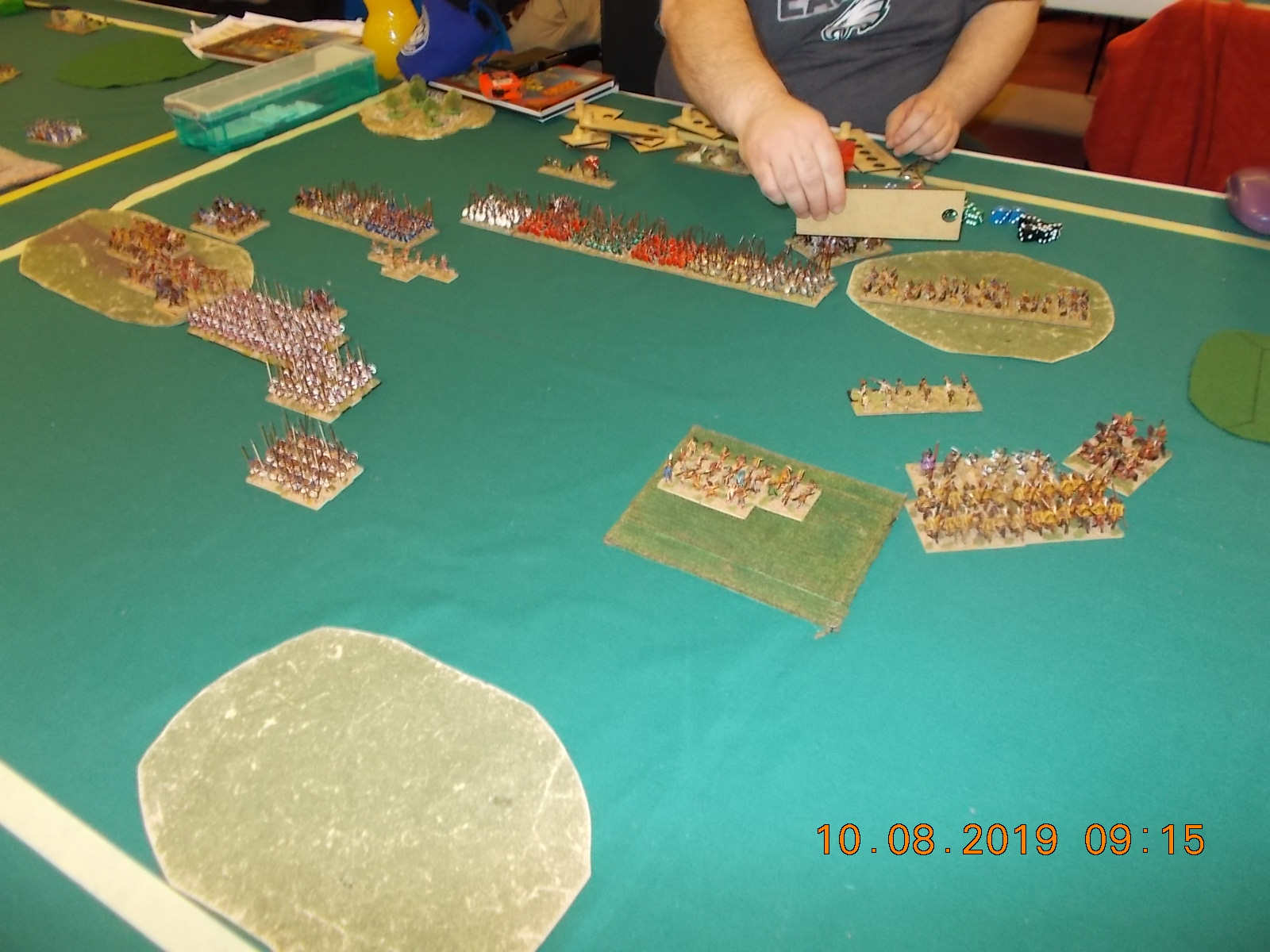 On my right my cavalry were keeping Steve’s Thracians penned in an open field and I hoped this would reduce the weight of Steve’s phalanx as he moved troops to support them. Seeing the danger posed by my Thessalians Steve started to move his cavalry across.

The Thessalians charged away the LH whilst the 2 phalanxes dressed ranks. Check out my beautiful echelon formation below! 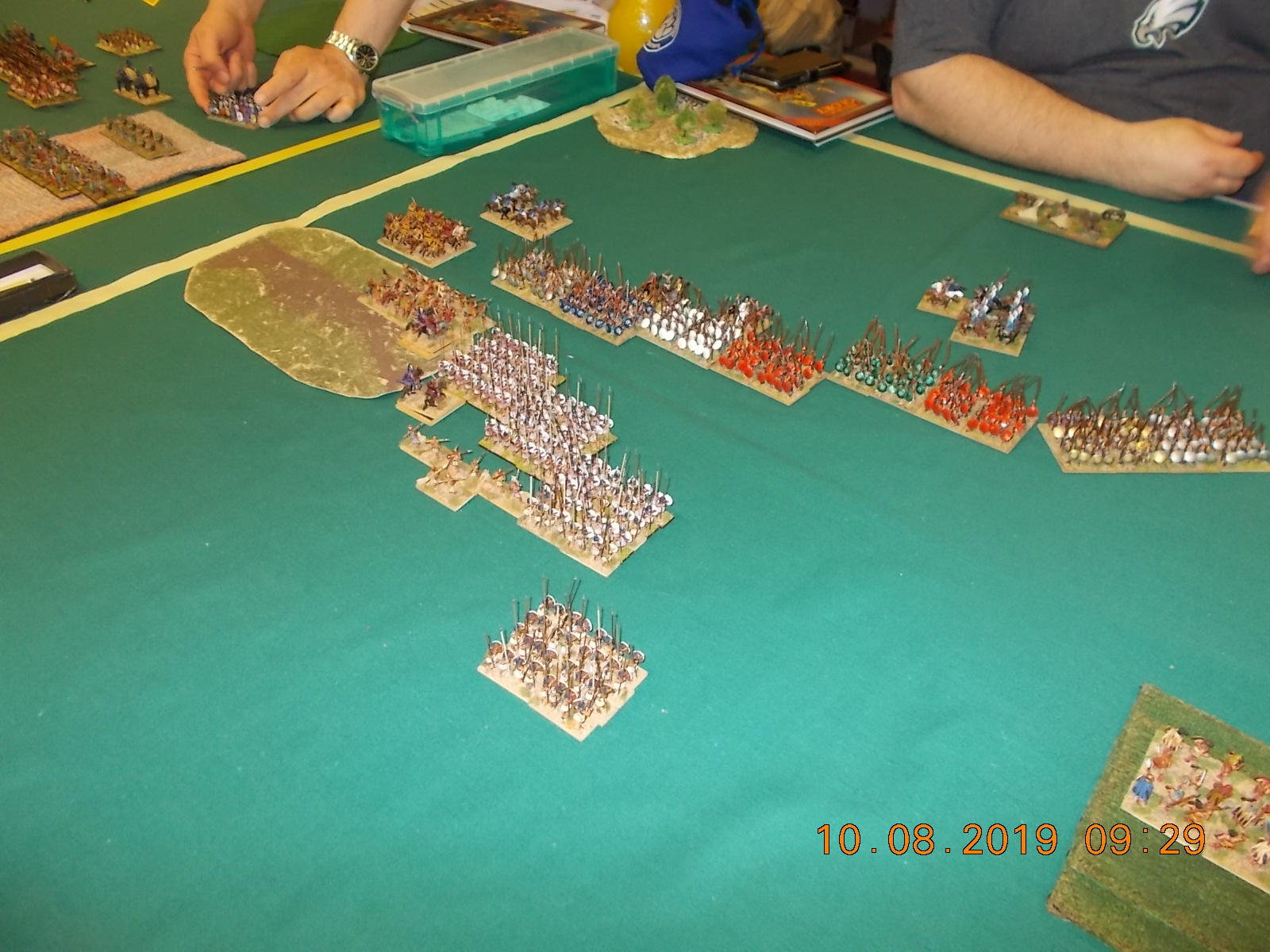 To entice the enemy pike my Thracians put a base out of the terrain as a tempting target and the fight was on. This would be a long protracted slog. Not wishing to see a fair fight my Thessalians deployed to take Steve’s pikes in the flank. 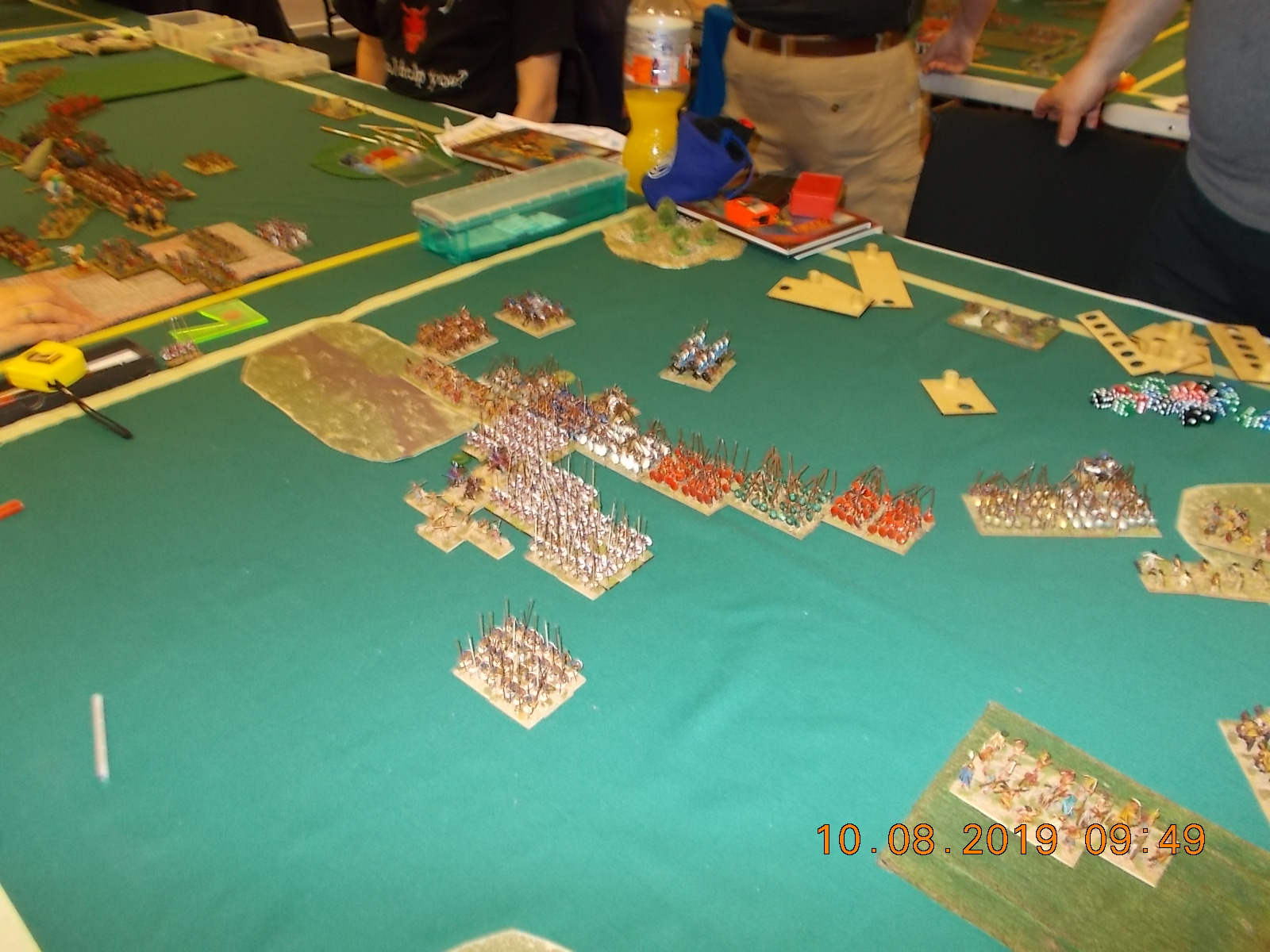 The reinforcing cavalry were still just of range so the LH charged the Thessalians to thwart their charge and would die in the process. It was a good sacrifice though and would lead to the demise of the Thessalians at the hands of Steve’s lancers later.

The push of pike was going my way as the 10’s of pike ground down Steve’s 8’s. Soon only 2 BGs were left on that side of the table. 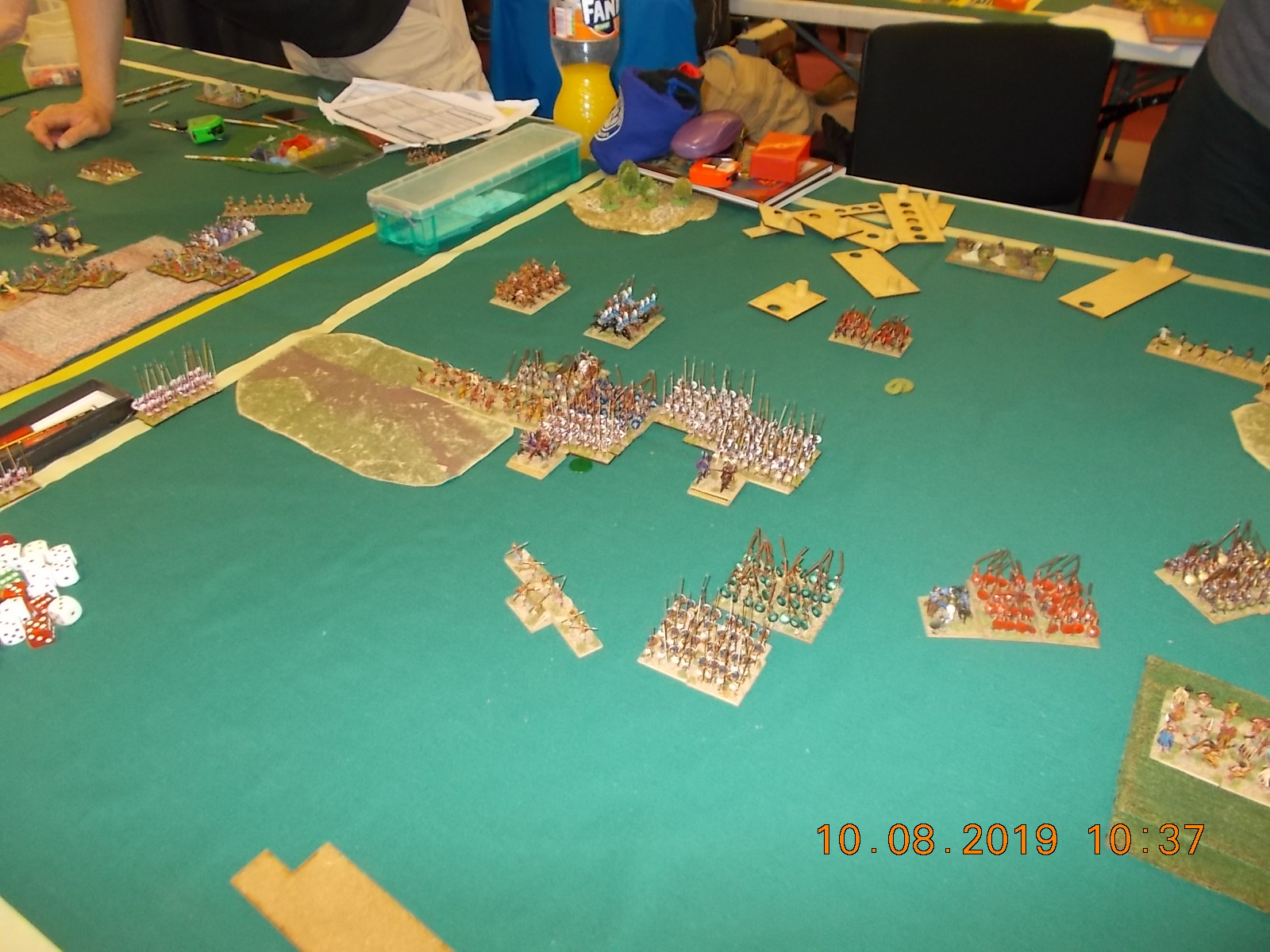 Elsewhere my other Thracian BG held the hill supported by a BG of Companions. Seeing things starting to run away from him Steve pushed his own Thracians forward and were promptly charged by my other Companion BG. In the centre we were headed for a straight 8 Pike vs 8 Pike battle although my LF were on hand to provide a cheeky overlap dice.

On the left the remaining enemy pike blocks were destroyed but sadly so too were my Thessalians. I needed to get my victorious pikemen over to the right asap to try and secure the victory. 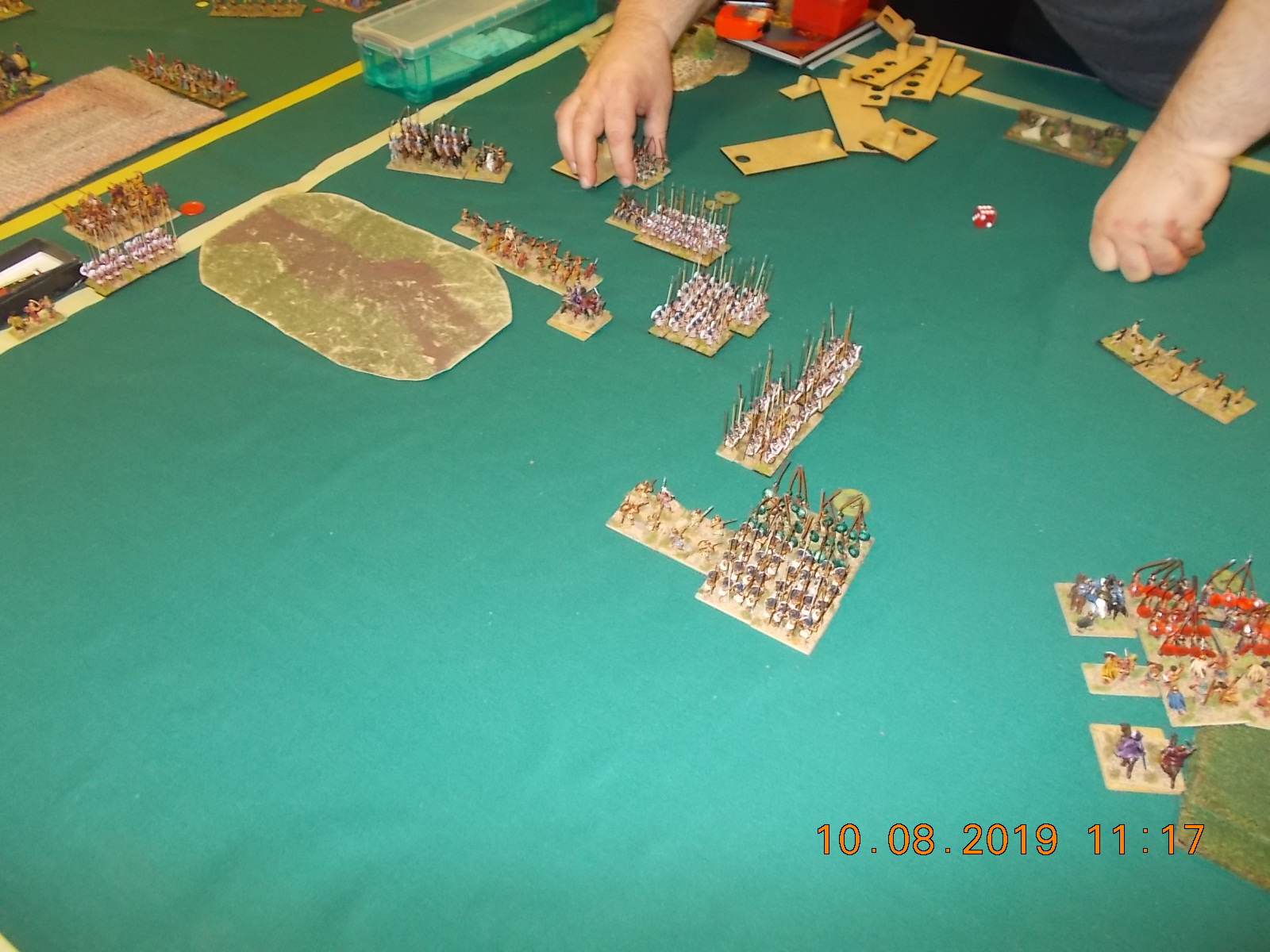 Steve’s pike charged my Thracians uphill and his other pike block was in trouble. His Thracians also dropped when charged by my Companions. And a lucky shot from my slingers also dropped another BG of pikes to disrupted. 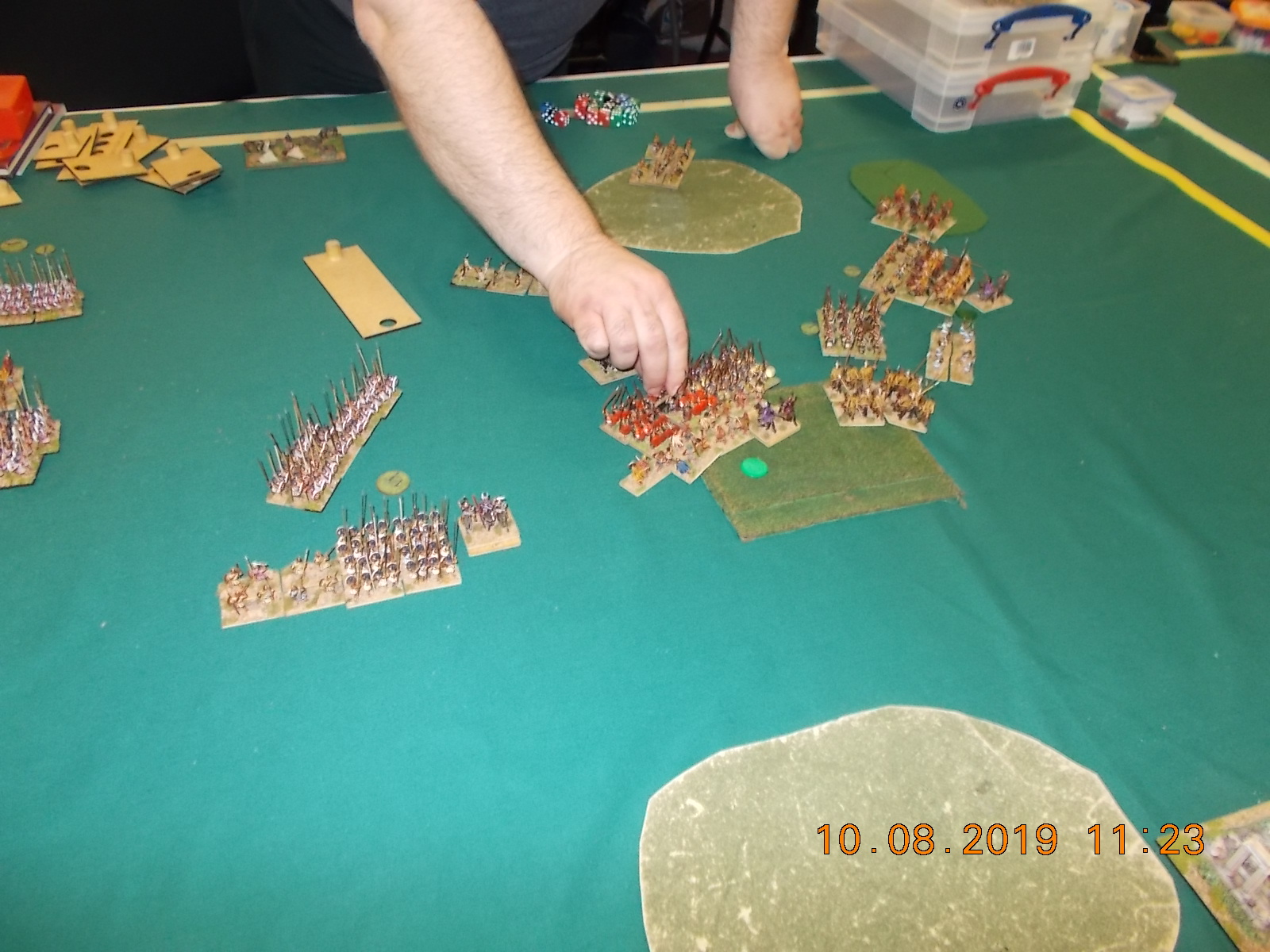 At this point Steve’s army was 1 point from breaking. My best chance was the Companions vs Thracians but the dice turned and the Companions dropped. And on the hill my Thracians started to crumble.

I’d lost 2 BGs with nearly all of Steve’s army lost to give me a 25-7 win. I was pretty happy with my strategy and tactics but should have been more aware that Steve’s army was so close to defeat. The extra 5 points here would have made a significant difference to the positions at the end of the weekend. But overall a good win against a good player.
Pete
Top
Post Reply
1 post • Page 1 of 1