My second game on Saturday was vs Phil Powell using LRR supported by a Dacian Ally. (Sorry this is slightly out of order – blame the computer gremlins!)

I won initiative and opted for Agricultural and added a Coast. The Dacians occupied an Enclosed Field with the Romans in line beside them. This is deployment with Phil conducting an imaginary orchestra. 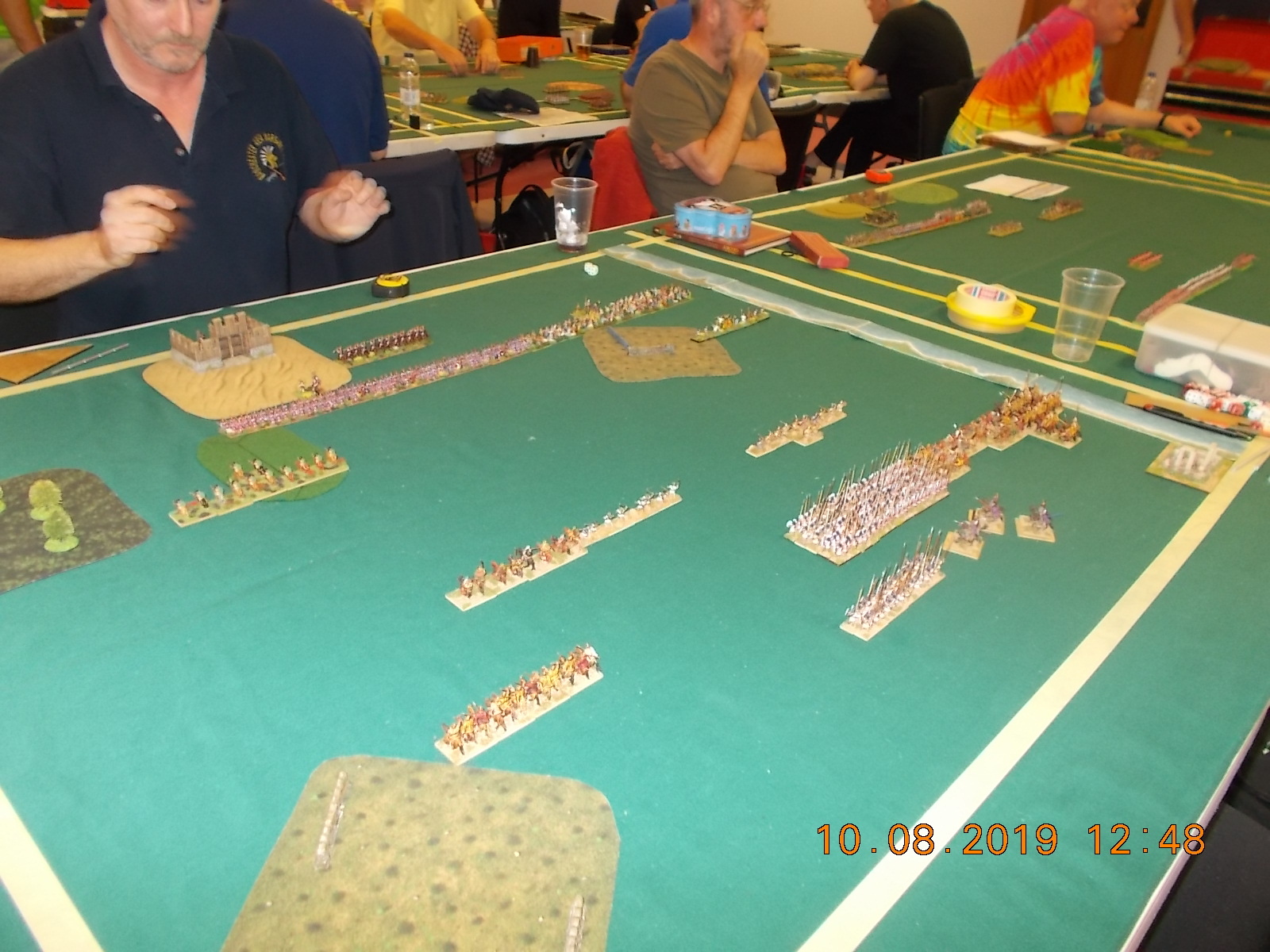 I elected to attack the Dacian command. On reflection this was a mistake. 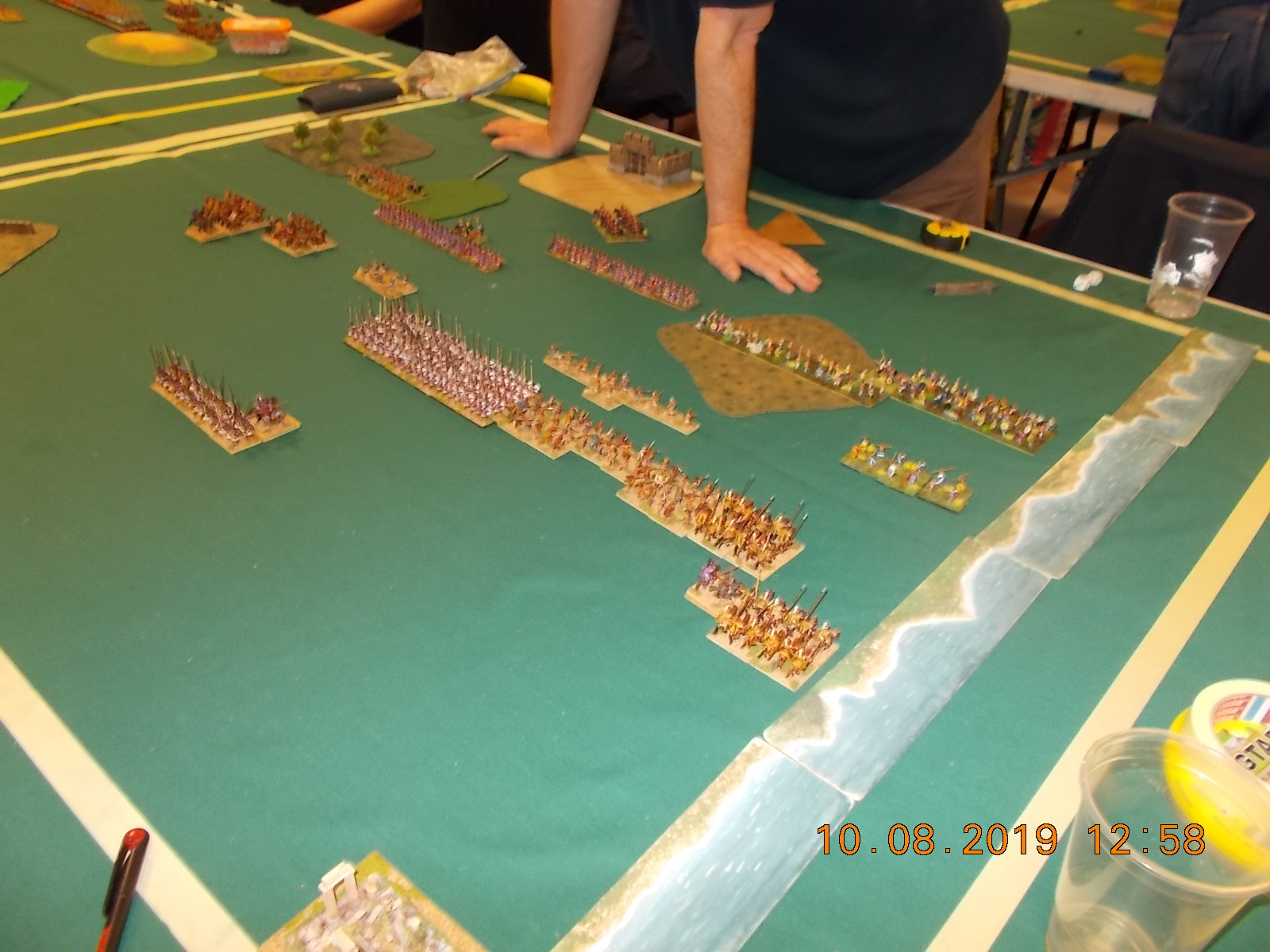 The Falxmen were not coming out of their field and the Romans were making good progress on my left. I slowed my advance and pressed ahead on the right. 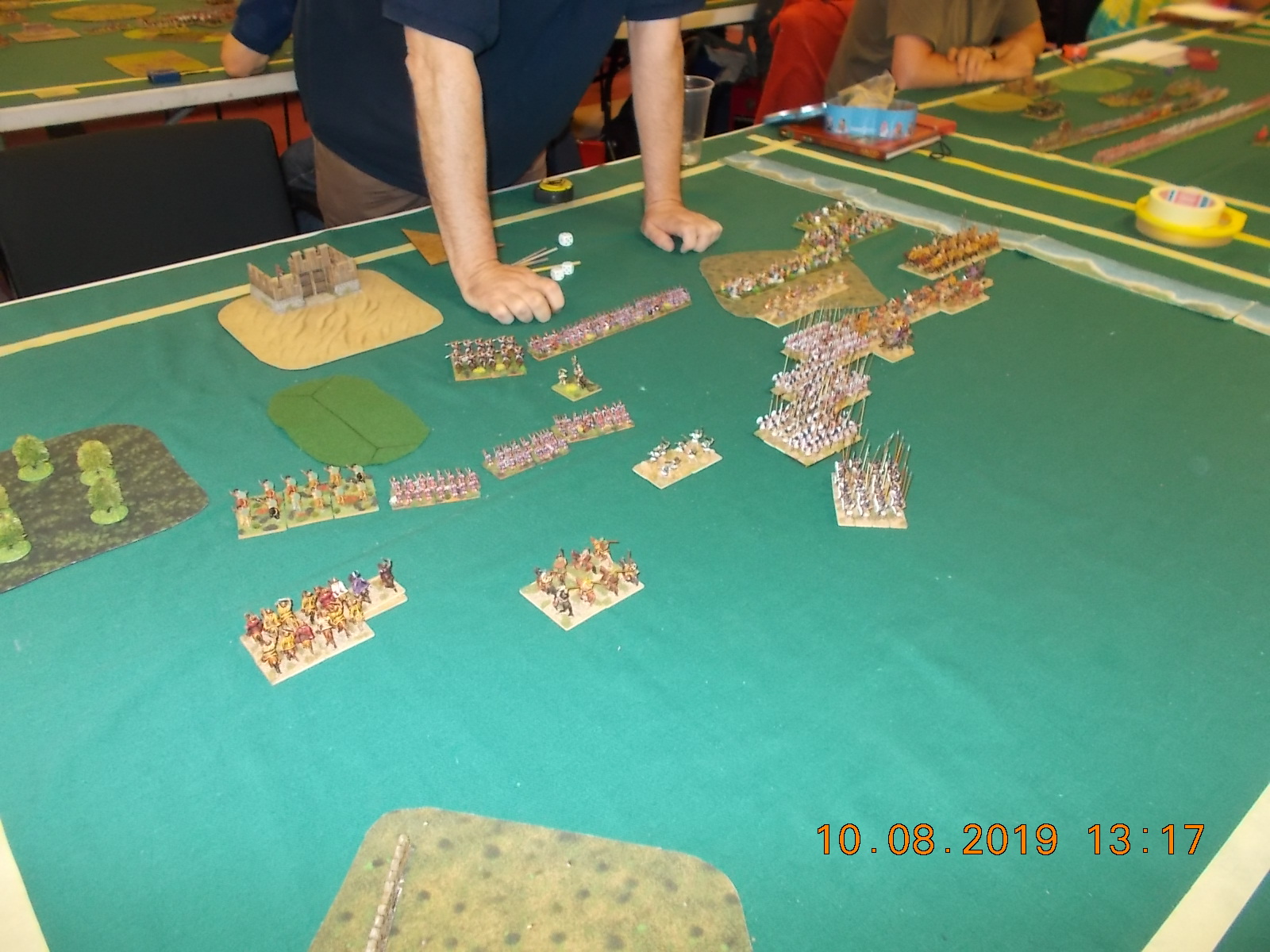 To get the Falxmen out of the field I charged both BGs with my heroic LF. They lost 2 bases before they were routed and would be rallied later in the game so it was a useful move. The Falxmen pursued out from the safety of the field but both obeyed orders not to charge into fresh enemy.

In my turn I charged in with Pike, Thracians and Companions whilst the 2nd Companion BG charged the Warriors. 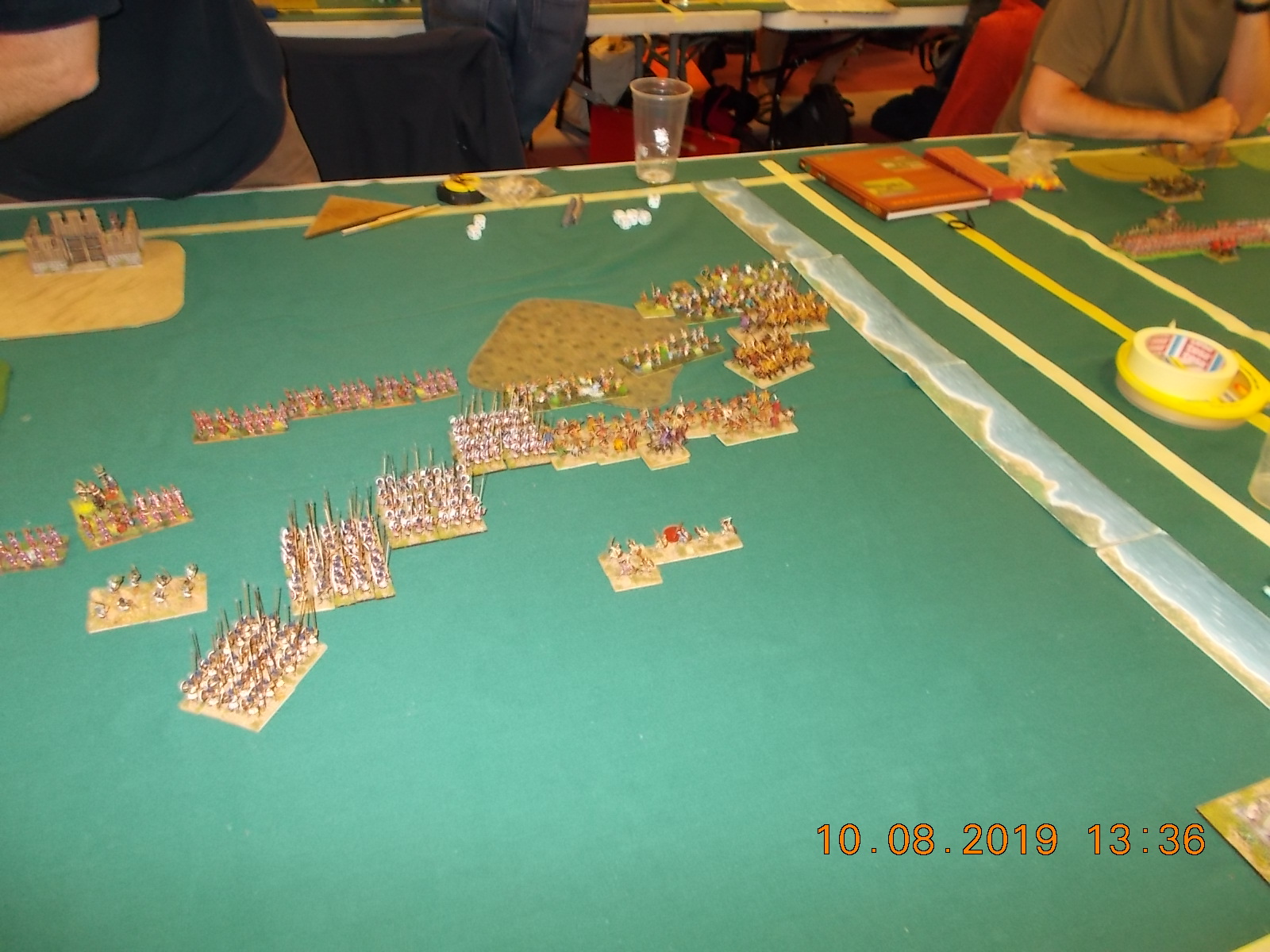 All 3 Dacian BGs would eventually be routed but boy did they take a long time to die. I’ve never seen so many 11’s on CTs and 6’s on Death Rolls!! This allowed the Romans to begin turning my position. Pike are not as manoeuvrable as they used to be! 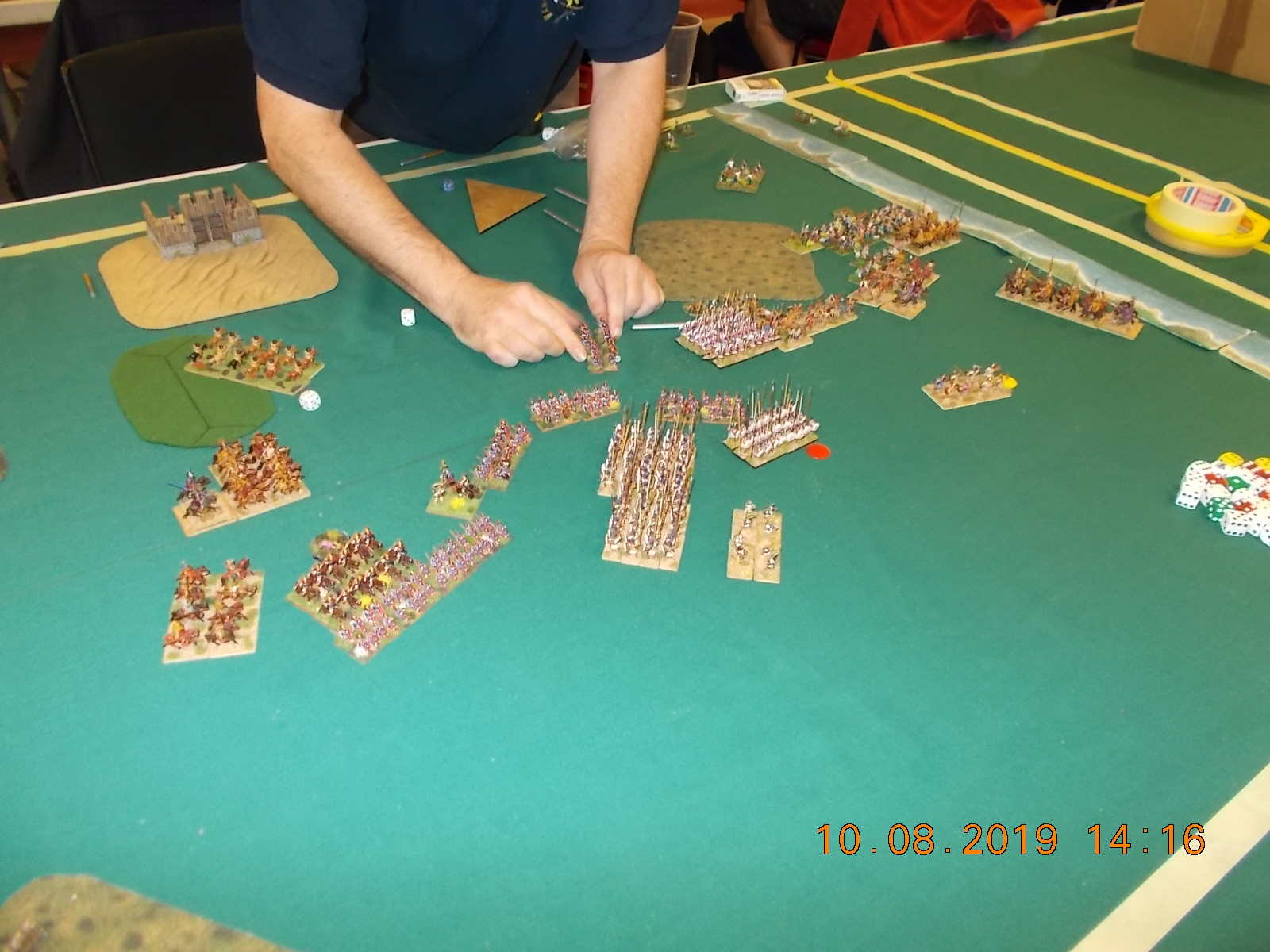 Some poor results saw a pike BG routing and the resulting pursuit moves would cause the other pikes more problems. Maybe I should have formed orb.

To add insult to injury, the Dacians Warriors rallied to fragmented.

I was fortunate to pick up Phil’s cavalry and LH as the game was drawing to a close but by that stage I had lost all 4 pike BGs. The enclosed field had prevented the Companions getting back into the game quickly enough.

As time was called I had lost 9 AP and Phil had lost 8 so it was a high scoring winning draw in Phil’s favour.

On reflection I should have attacked the Romans. The Thracians and Thessalians could have faced off the Dacians whilst I threw the Companions at the Superiors and the Pikes at the Elites. With just 1 general I think Phil may have struggled but there is no guarantee that the result would have been any different.

With 3 games played my results are trending downwards and if you are reading this in the order of posts rather tan games you will already know that this trend continues.
Pete
Top
Post Reply
1 post • Page 1 of 1