It is Sunday morning for game 5 and I am mid table. I need a big win to have a chance of a podium finish.

I am drawn against Steve Murton who is using Ptolemaic – another Successor army.

We are both on +3 but I win initiative again and opt for Agricultural. I’d just bought a new Enclosed Field and this ended up in a fairly unfortunate position for me. Steve rather unsportingly placed a large Vineyard in the middle of my central sector which I failed to shift. This would prove to be a bit of a nuisance. 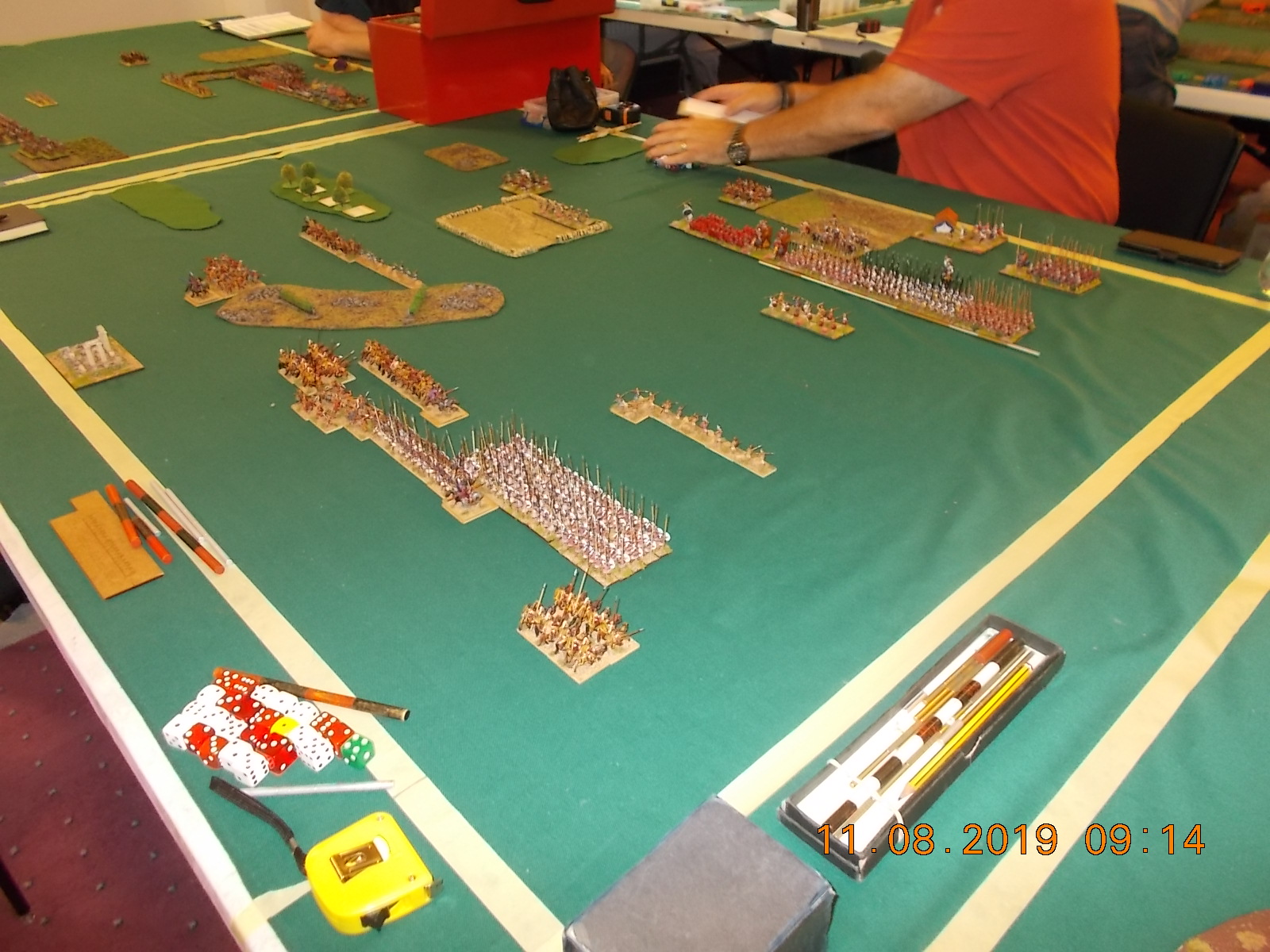 I have decided to attack through the Enclosed Field in an attempt to turn Steve’s flank. 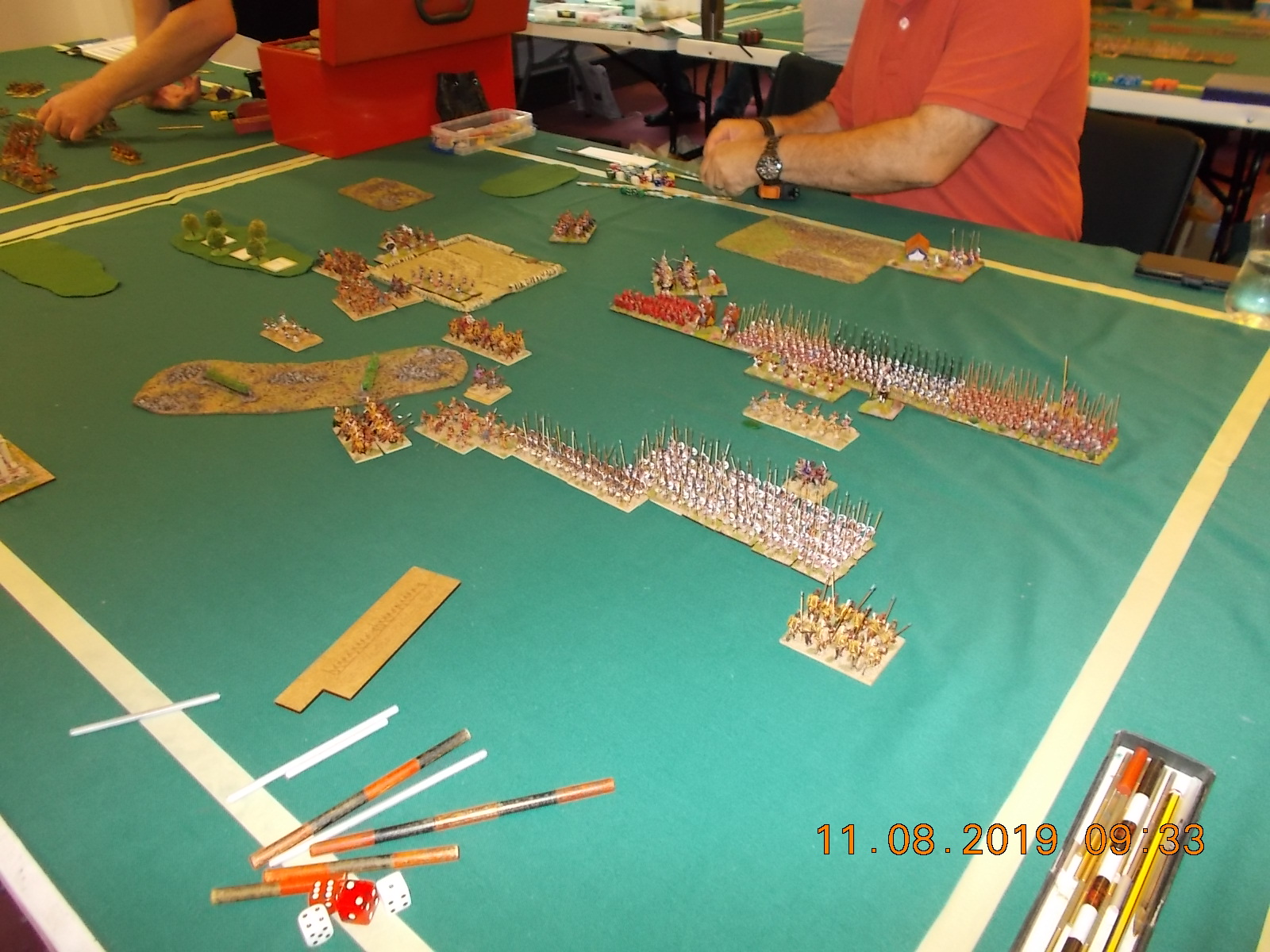 No-one appears to have told the phalanx who have probably gone too far forward. 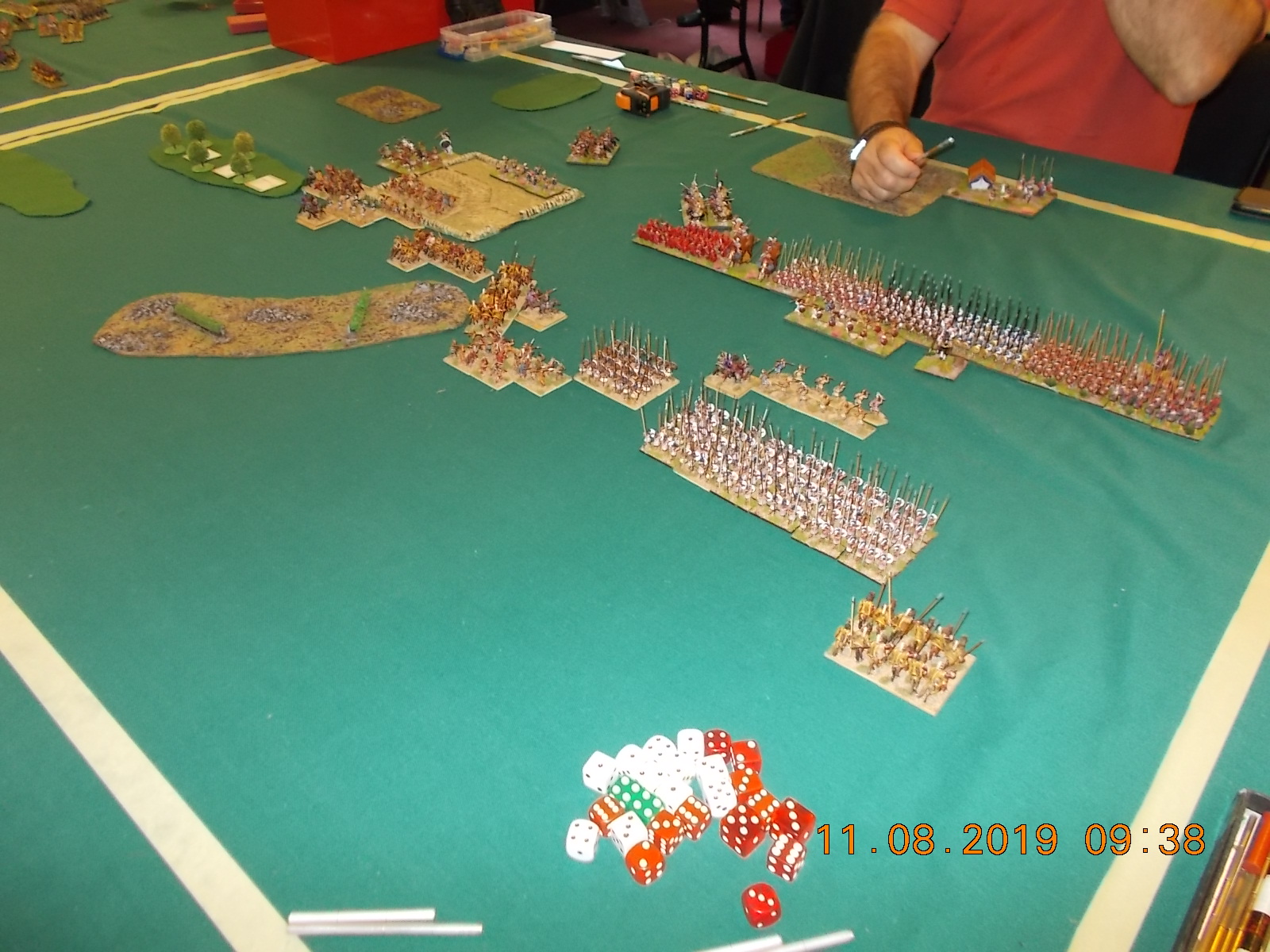 The Thracians enter the field and Steve’s LH charge mine. Similarly in the centre the LF engage each other. 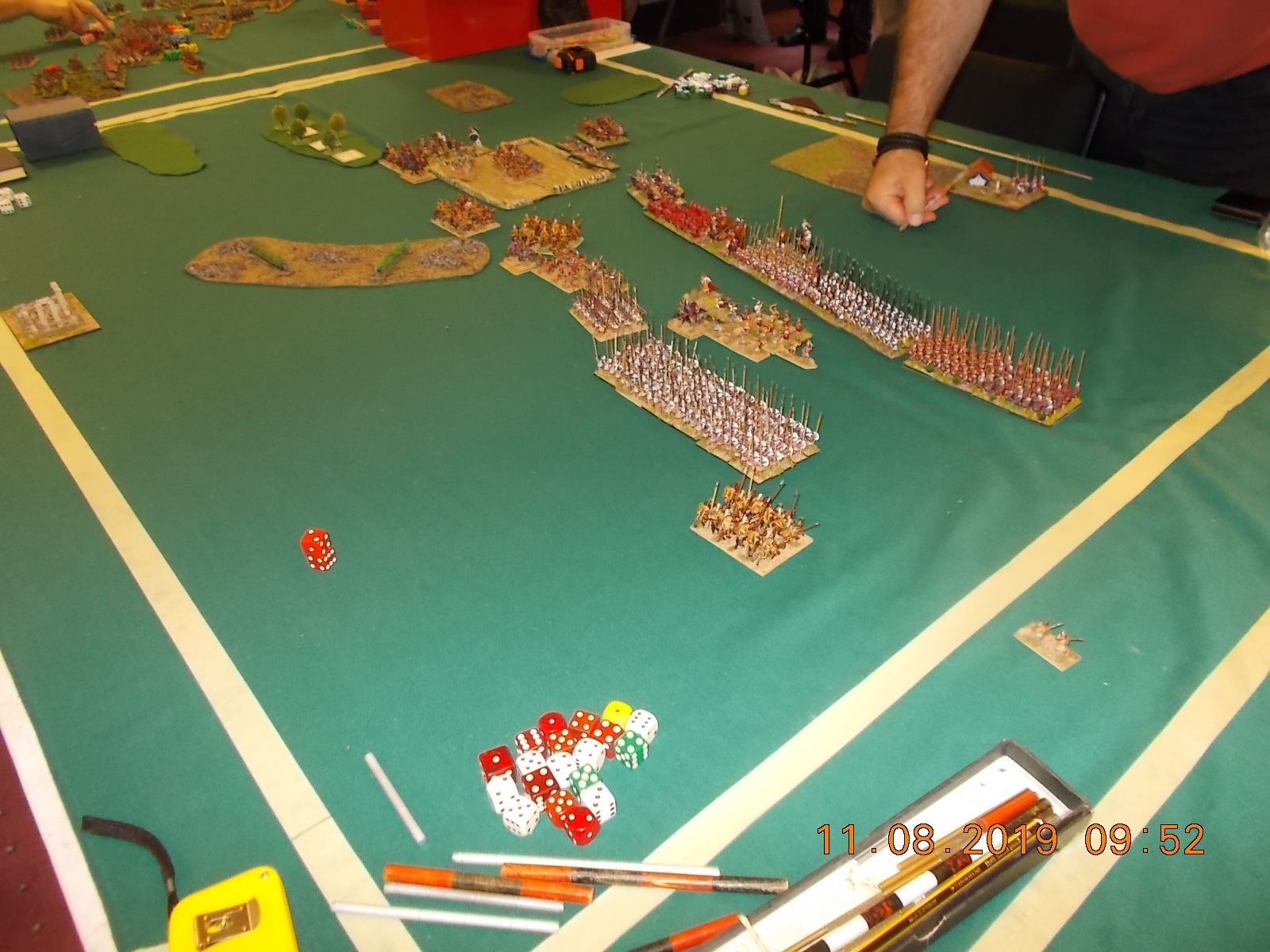 Nothing much happens in either combat initially. And at this point lady luck deserts me. My Companions fail their test to charge and hit the MF. And my 8 Pike charge Steve’s LF – again without orders.

The Companions fail to dent the MF and are fortunate to break off disrupted but having lost 2 bases. This effectively takes them out of the game as a fighting unit and puts the Thessalians in peril from Steve’s Companions.

On my left the slingers flank charge Steve’s LH and they will die in short order. 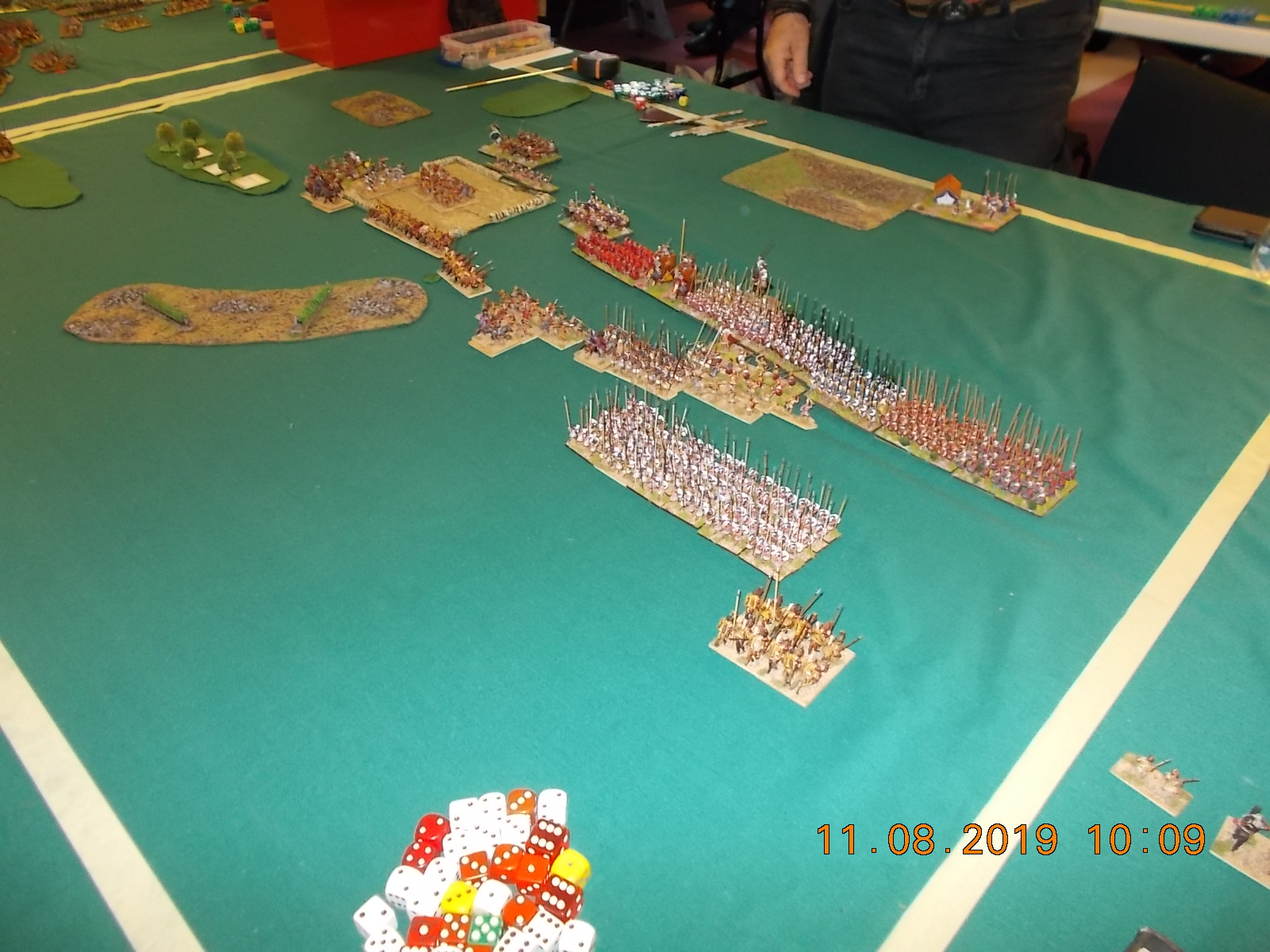 Steve charges a pike BG into my LF and both LF BGs will be eliminated through base losses. The loss of my Companions is sorely felt though as my Thracians face up to Steve’s MF and Elephants. On the right Steve has the larger phalanx and my 2nd Companion BG decide to try and get round the flank. 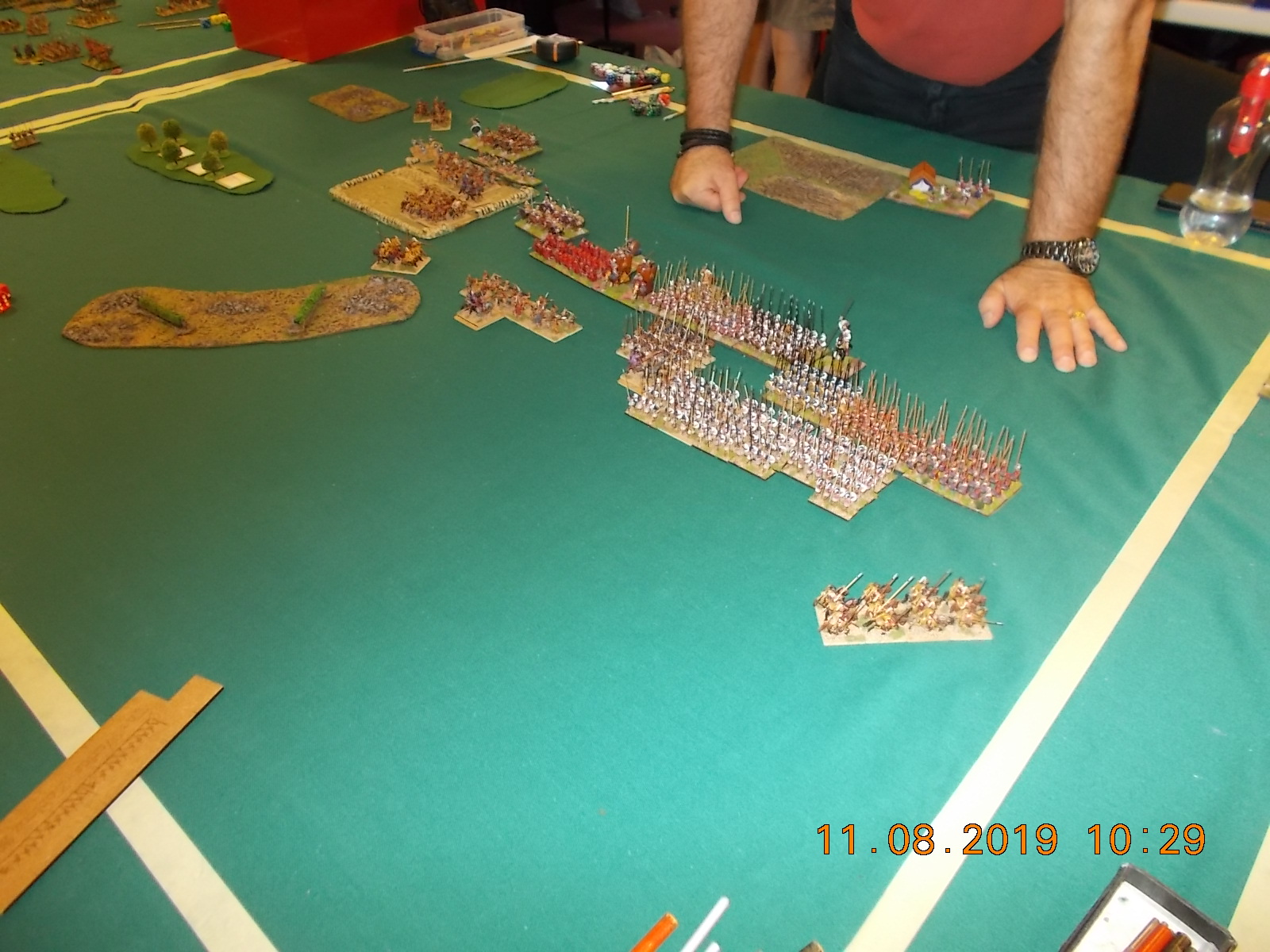 At this point my line is pretty solid although the 8 Pike are looking a bit exposed. On the right my 10 Superiors expect to beat the 8 average pike in front of them but sadly they fail to do so. A pair of 2’s on a CT and they are fragmented and doomed.

The only saving grace is that when they rout the right hand Pike BG will be lined up to be charged in flank by my Companions. And I will have multiple attempts to rally the Superiors.

Over on the left the Thracians charge the LF who evade through the cavalry who are also being charged by my LH. The LH are down to 3 bases so this quite risky but it pays off – eventually. The Thracians struggle to inflict damage on Steve’s Cavalry and the melee is quite protracted. Had they gone down sooner I might have had a chance at Steve’s Camp. 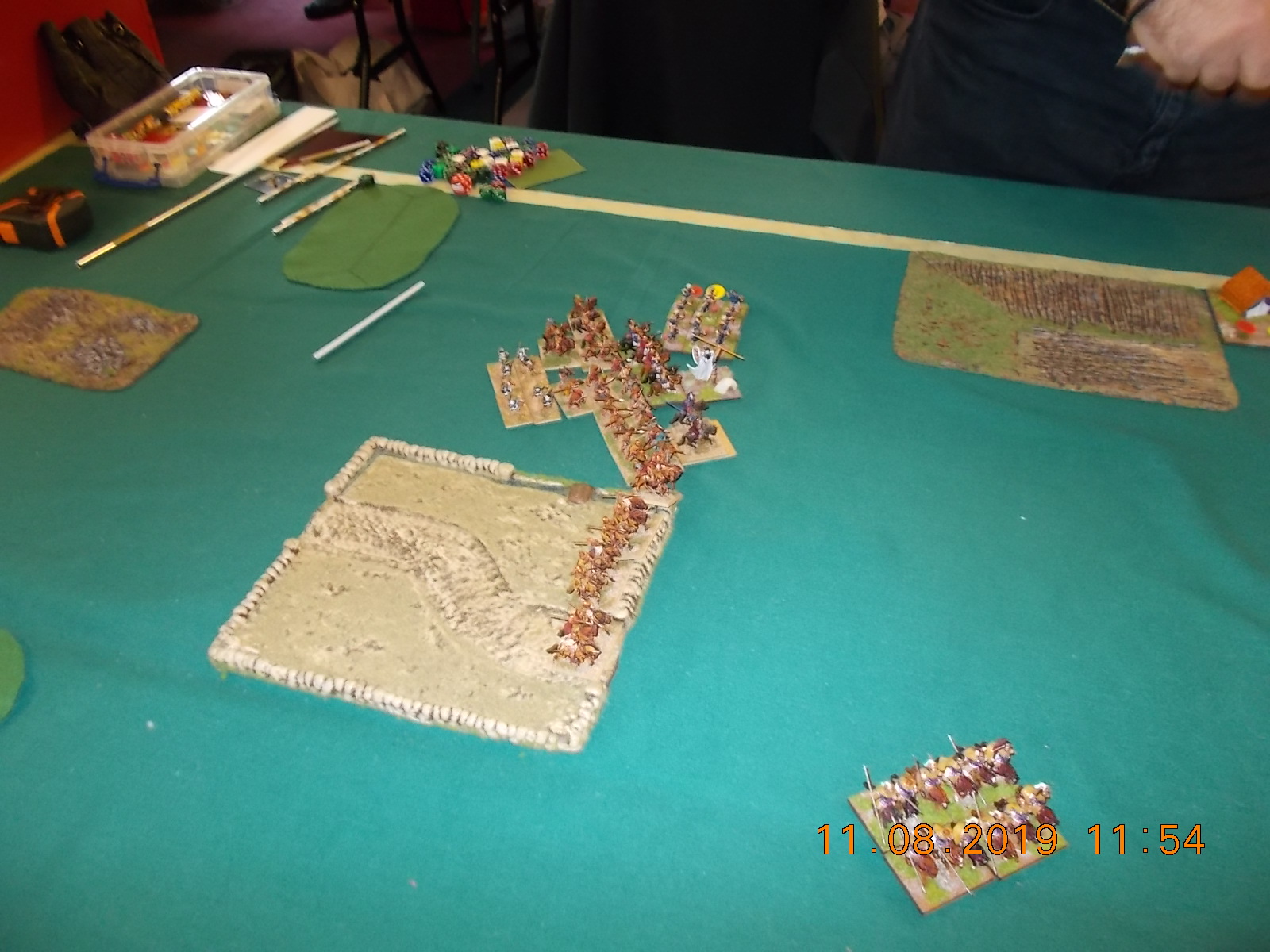 Back to the right and the Companions break Steve’s Pike BG. He throws a 5 for his initial rout move. Anything but a 1 for my pursuit and the pike will burst through Steve’s phalanx. Sadly it is a 1 and they turn 90 degrees in the JAP and head for their base edge.

But all is not lost. The Companions are poised to charge in again so Steve recovers his other Pike BG and charges them. In short order another Pike BG is routing and the Companions pursuit take them into the Superior’s flank. 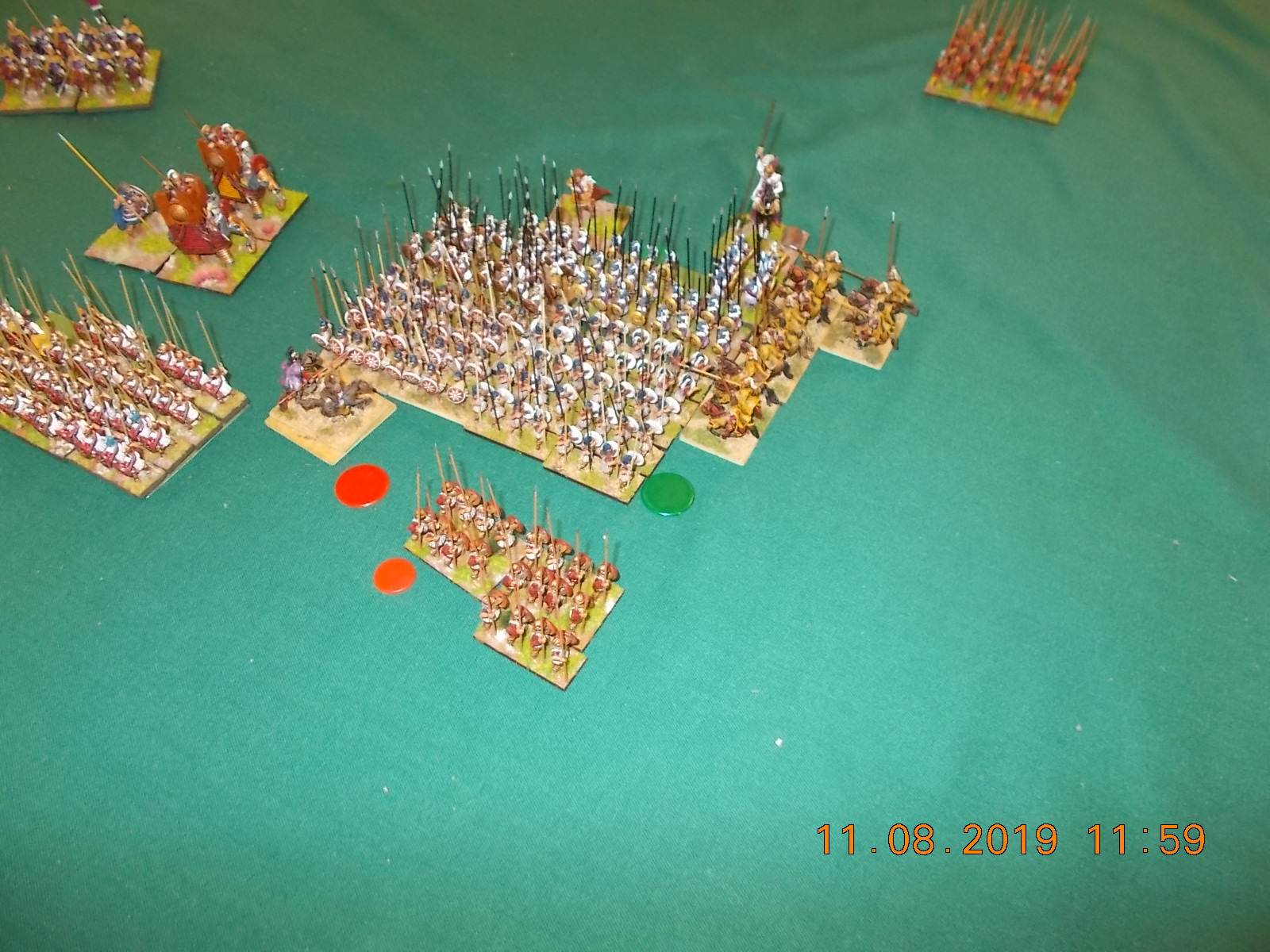 A quick count up reveals we are both 2 points away from breaking. The Companions miss completely in the impact phase so Steve’s Pike remains only disrupted. But come the impact I have 5 dice at double plus and 2 dice at evens. Once again I miss completely!

Despite multiple attempts by the IC my routing Superiors refuse to rally.

And shortly after Steve takes my camp and it’s game over. 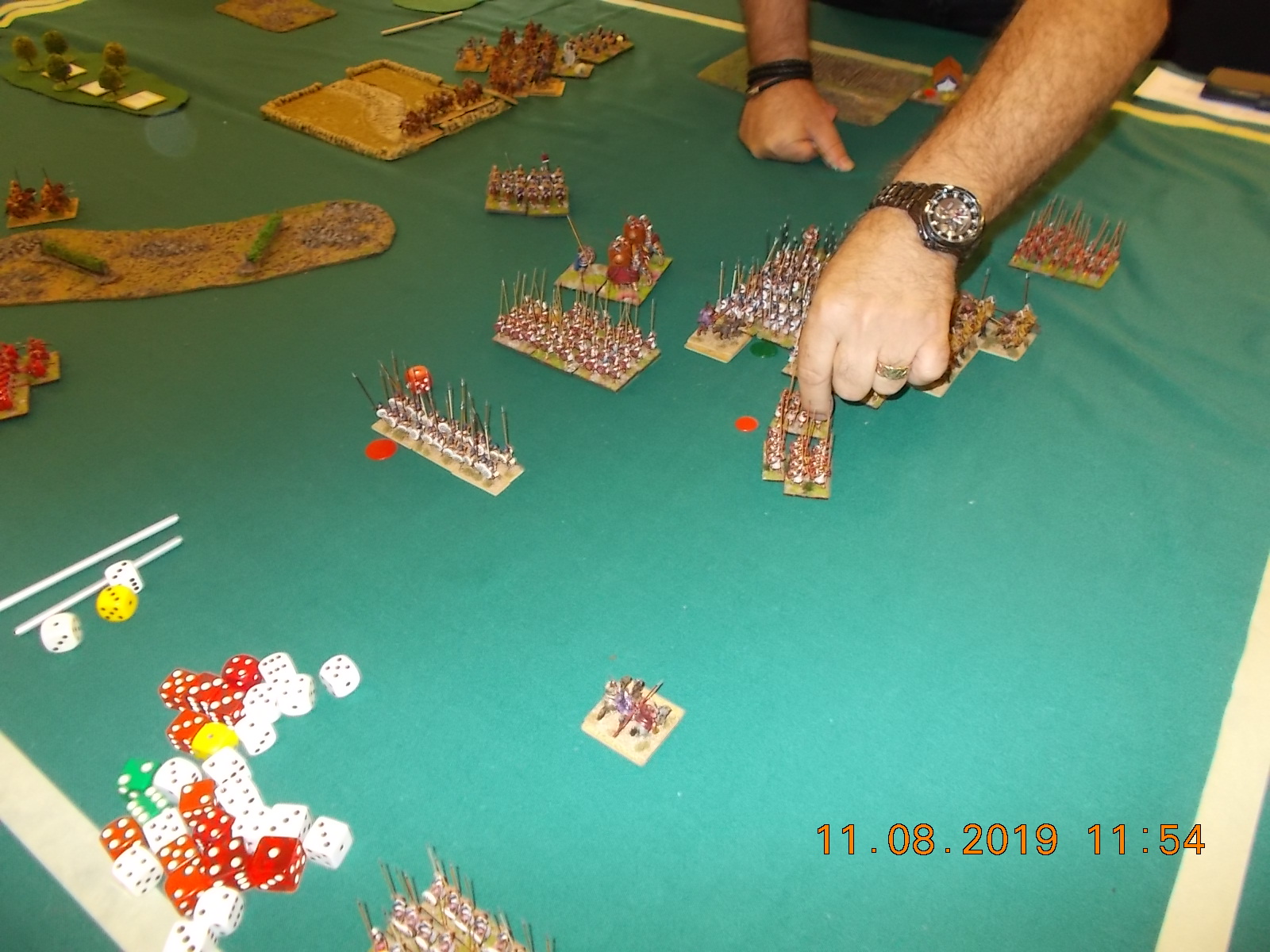 It’s been another cracking game which could so easily have gone the other way. On reflection I should have held back with my pikes until the Thracians had cleared the field. But hindsight is the only perfect science.