And so on to Sunday morning where I will have the pleasure of another Lance Bow* opponent in the shape of Steve Brown and his Parthian horde.

I lost initiative again and Steve elected for Steppes – a sensible choice given his army – and selected all open spaces. I went for a large uneven, 3 rough plus the smallest open space as my compulsory. The large uneven fell on the flank and only 1 piece of rough would play a part in the game.

This is deployment. Steve has his LH in the uneven – a line of cavalry and his Cats on my left. 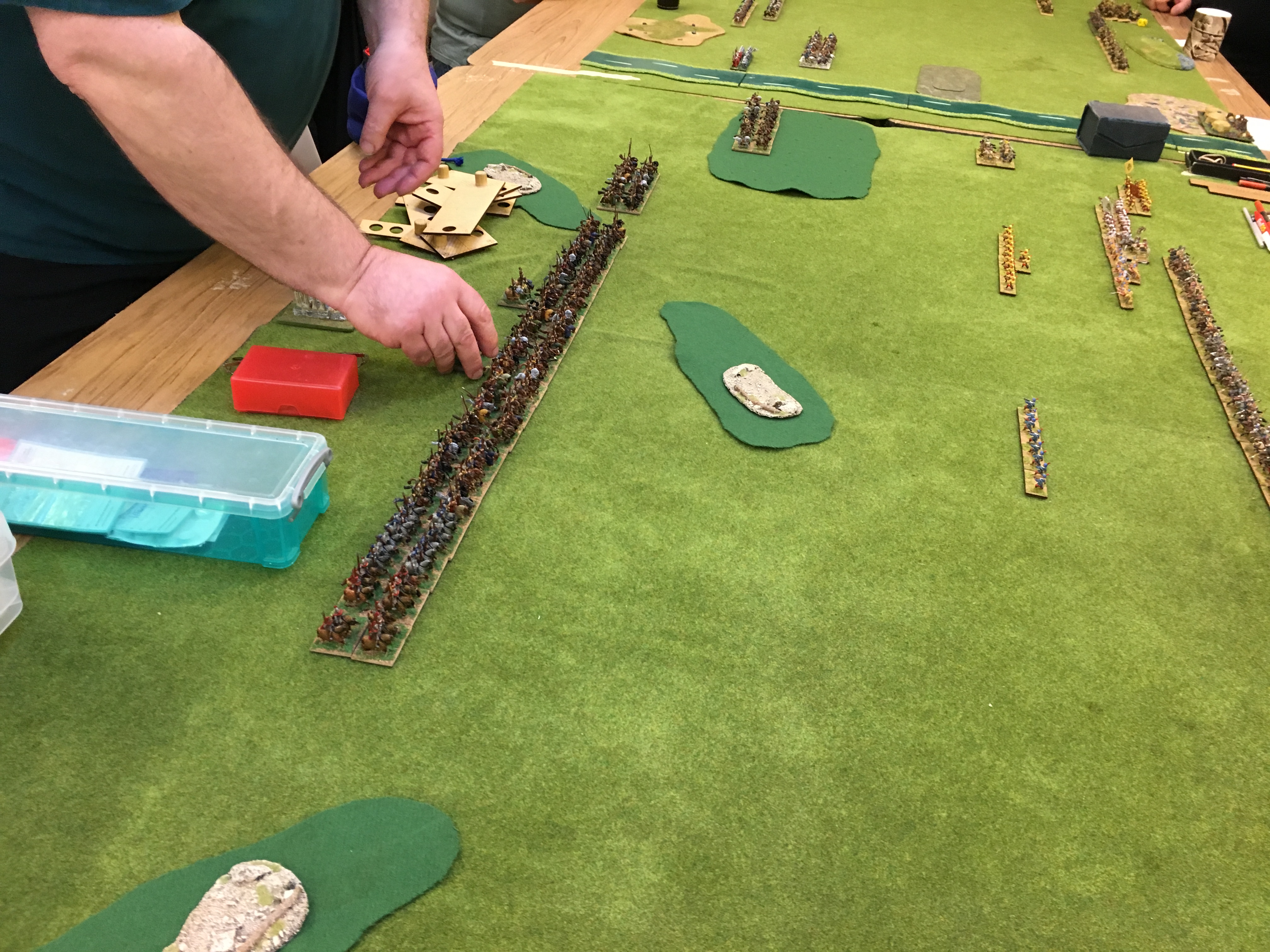 We know there’s a flank march and I assume – wrongly – that it will be on my right because my camp is on that side. 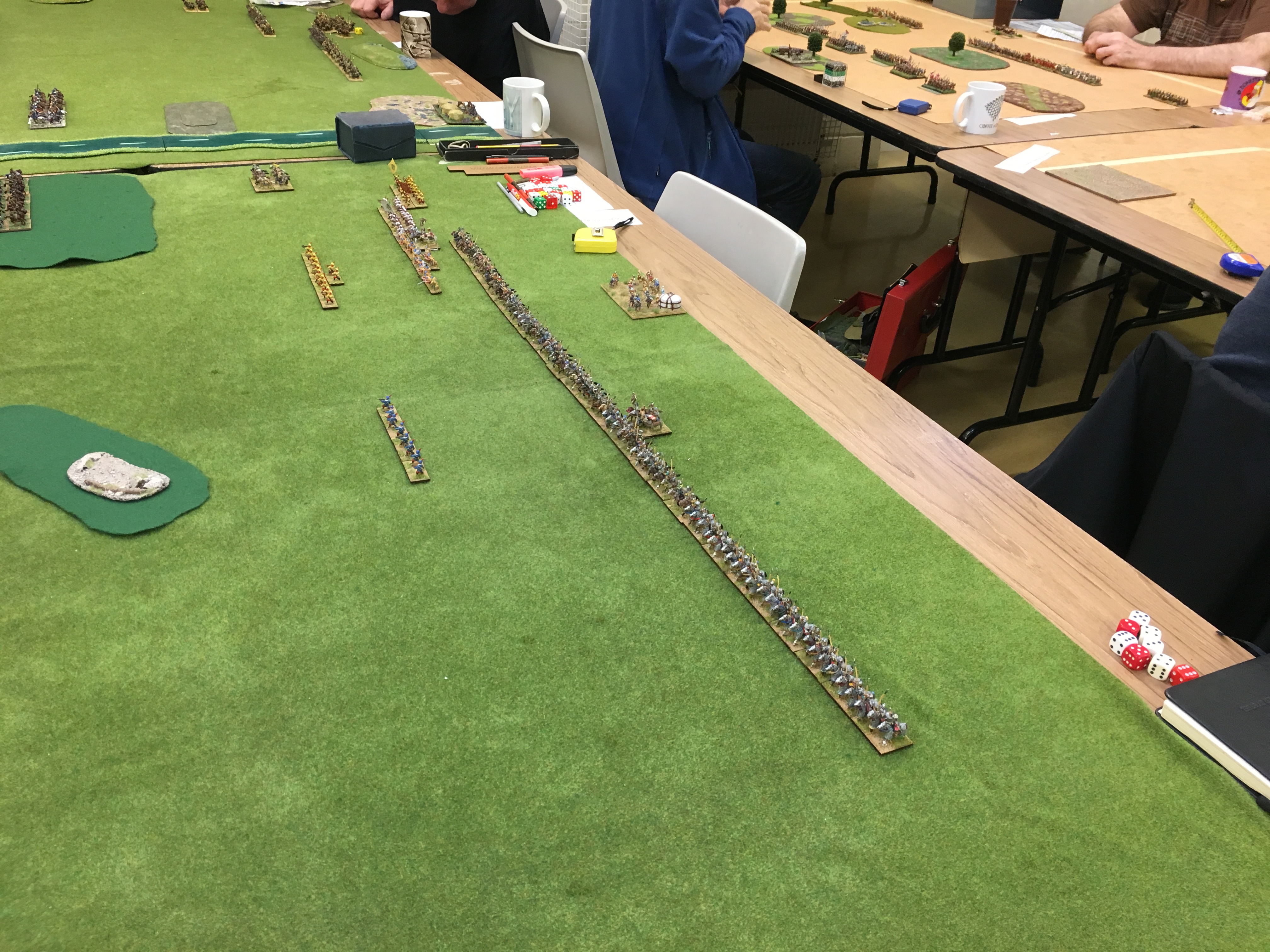 I moved first and shoved everything forward as quickly as I could. 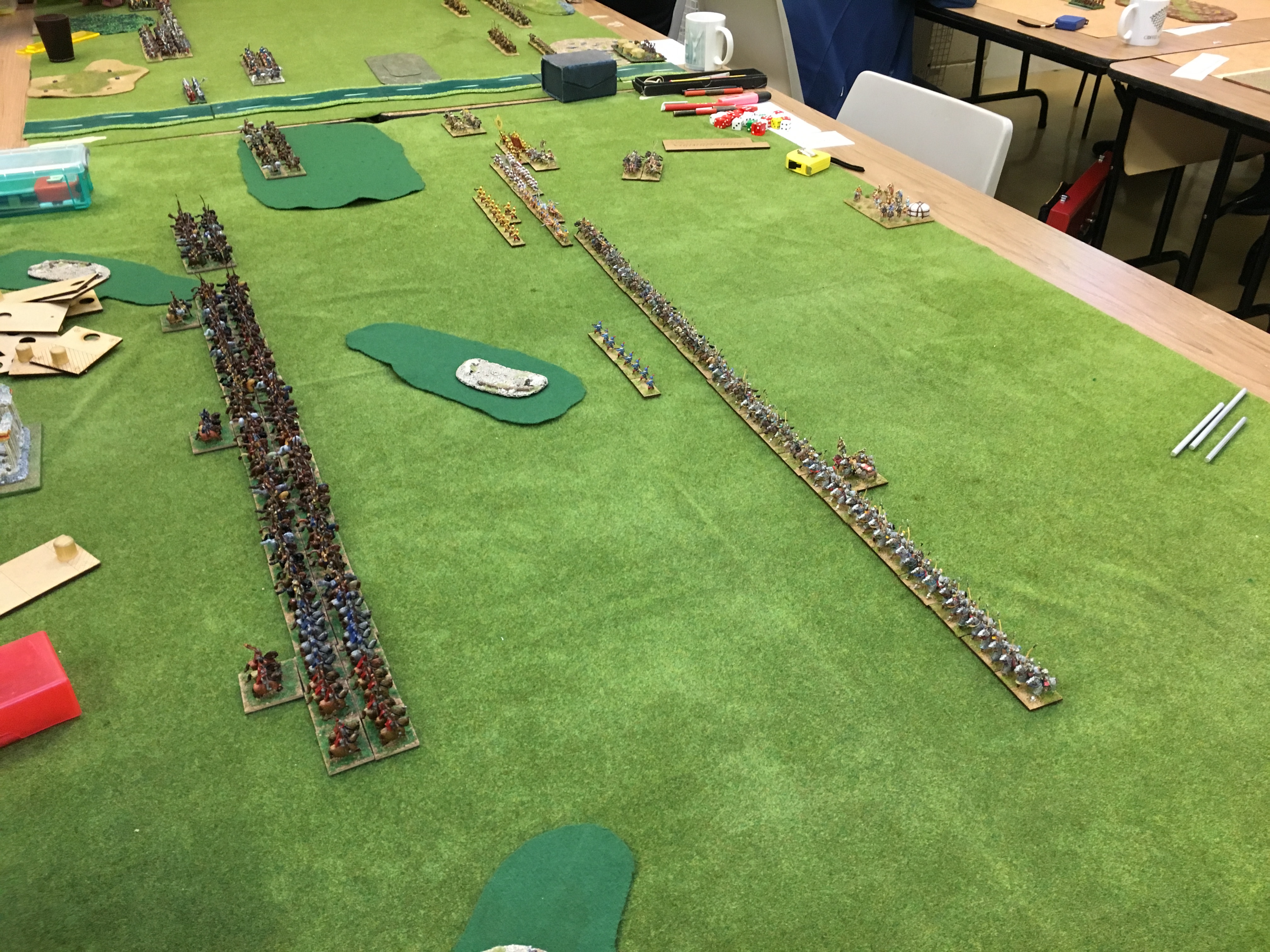 Steve – seeing the weight of MF bow and XB on my right decided to start to move his troops out of harms way. 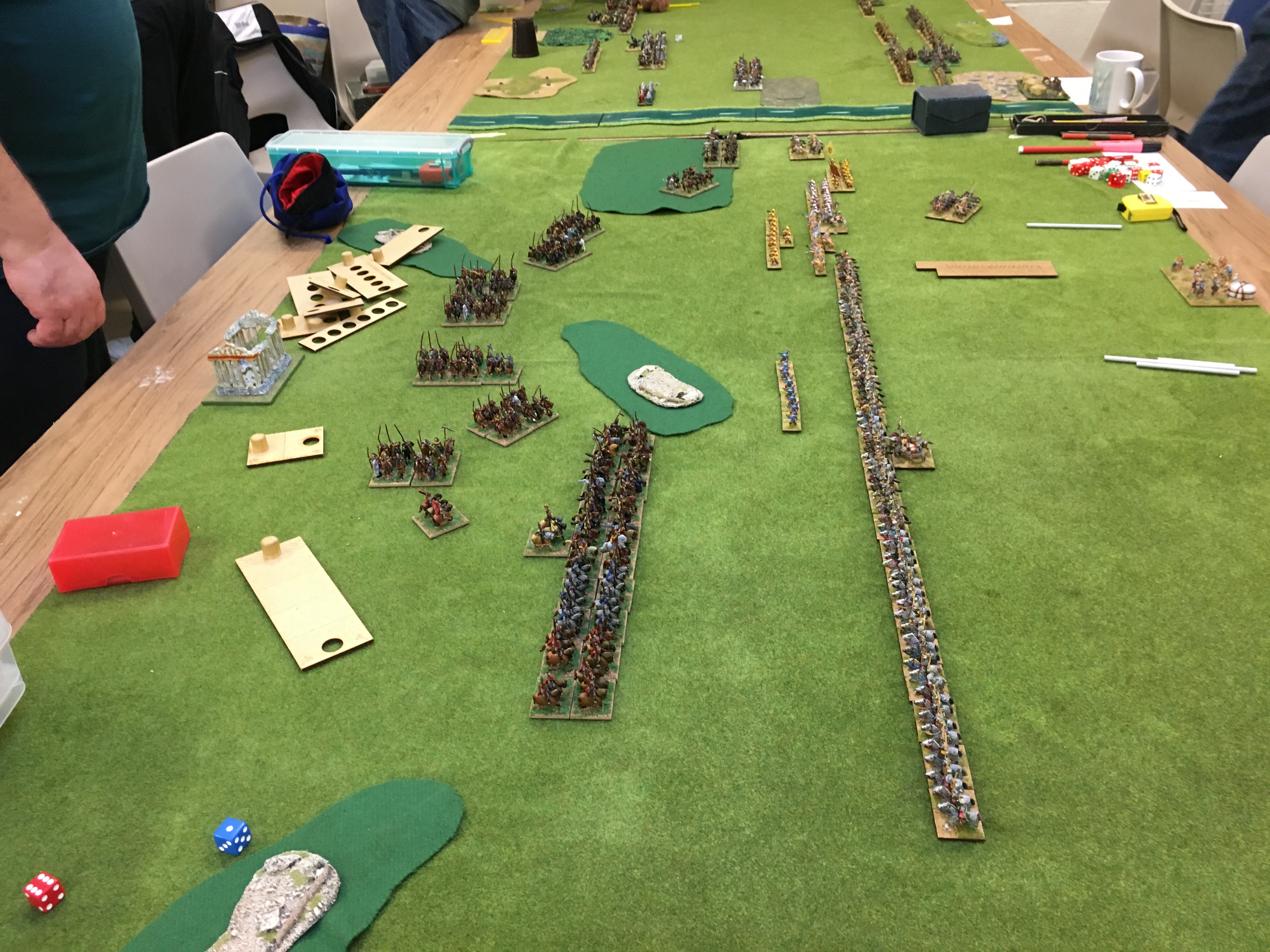 This allowed me to concentrate a lot of firepower against the delaying LH who started to shed cohesion and bases. But with such a large army Steve was pretty unconcerned. He even sent a cav BG in to delay things further. 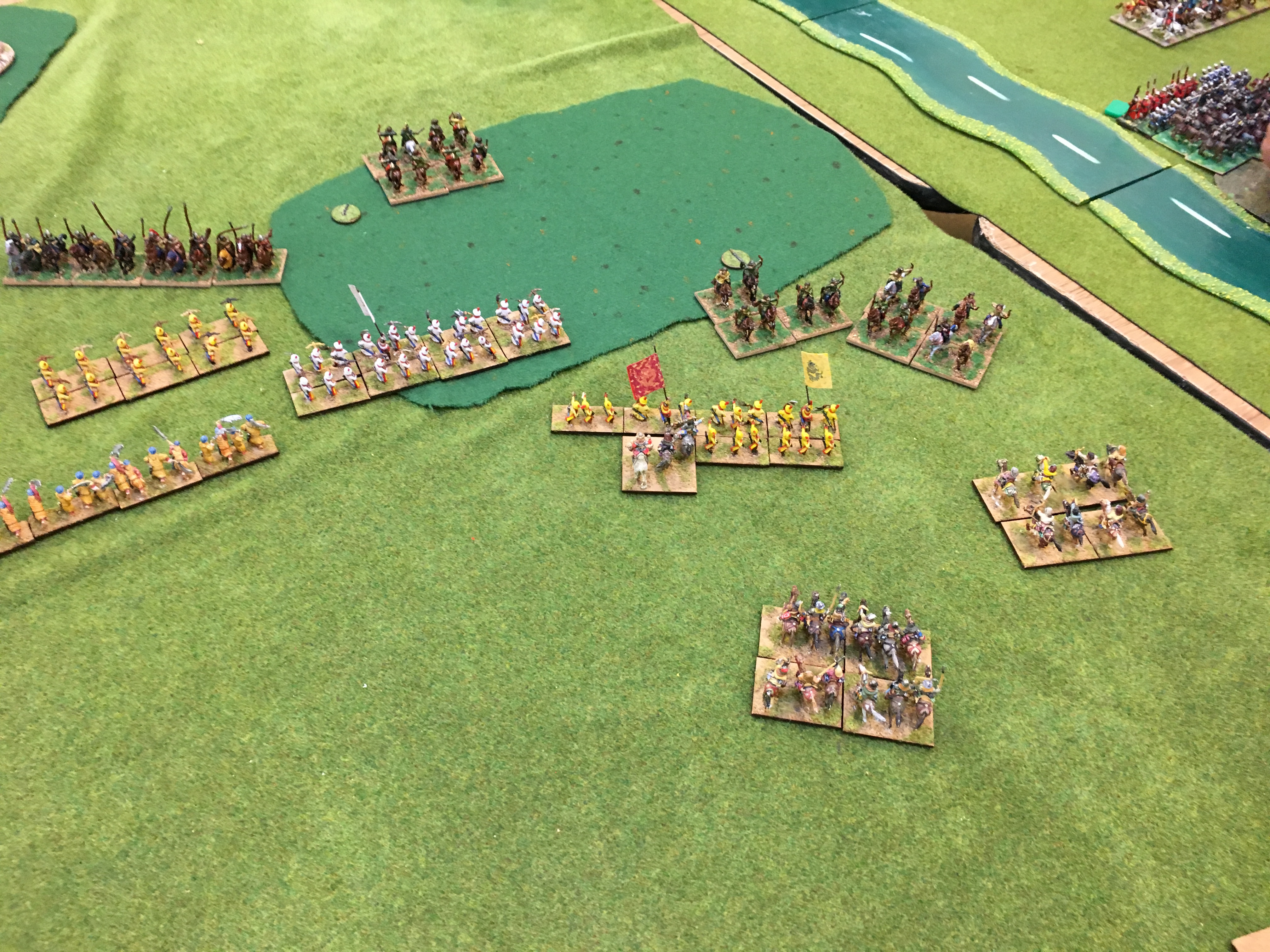 In the centre my handgunners had got into the rough going and I was happy to trade shooting. I had the IC – Steve didn’t. But Steve had the numbers and they all had a lance. 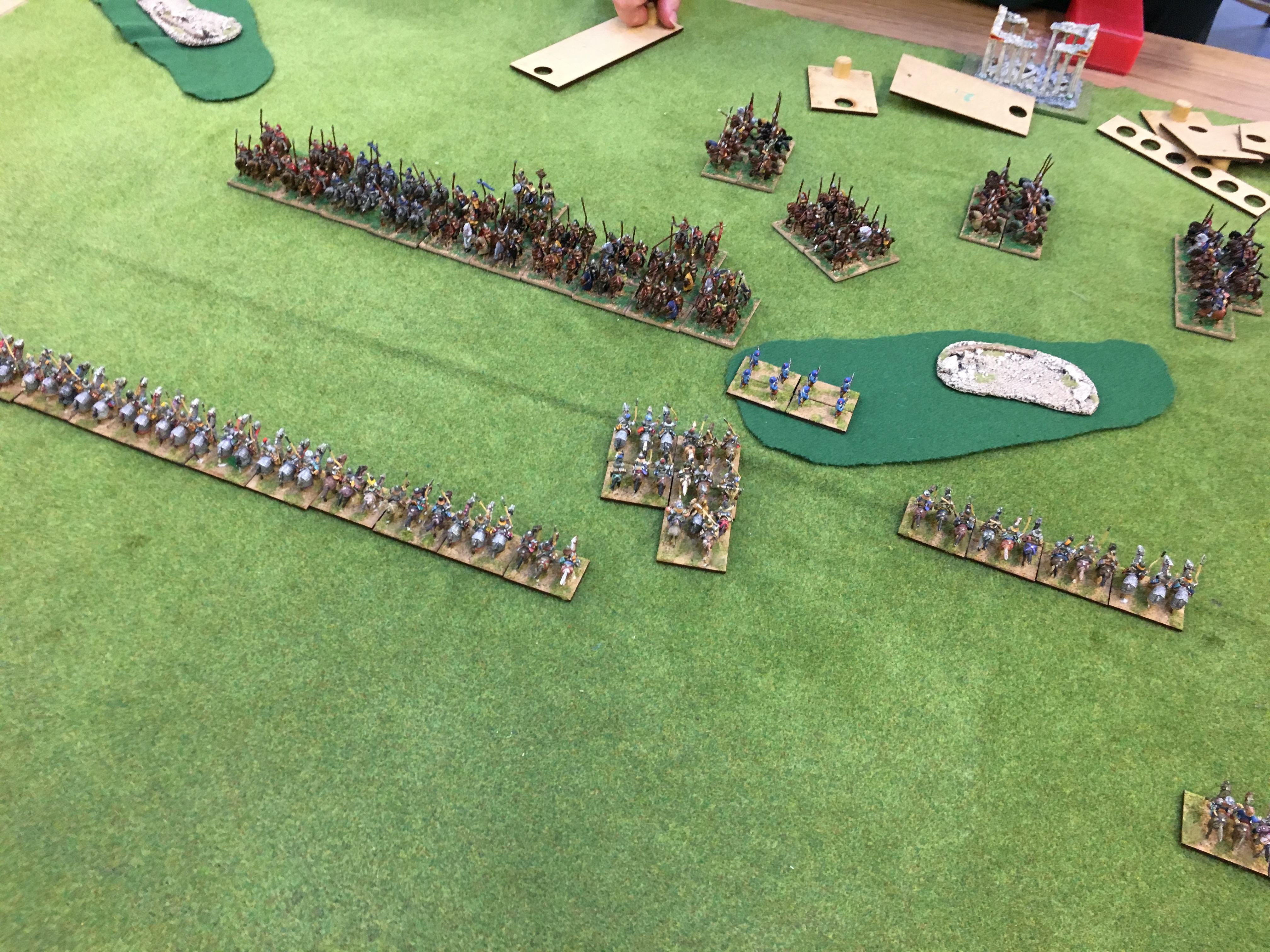 It slowly dawned on me that most of the Parthians did not have swords so if I survived the impact, I would be up in any melee other than vs the Cats. Armed with this new knowledge I decided to charge but it didn’t go as well I’d hoped. 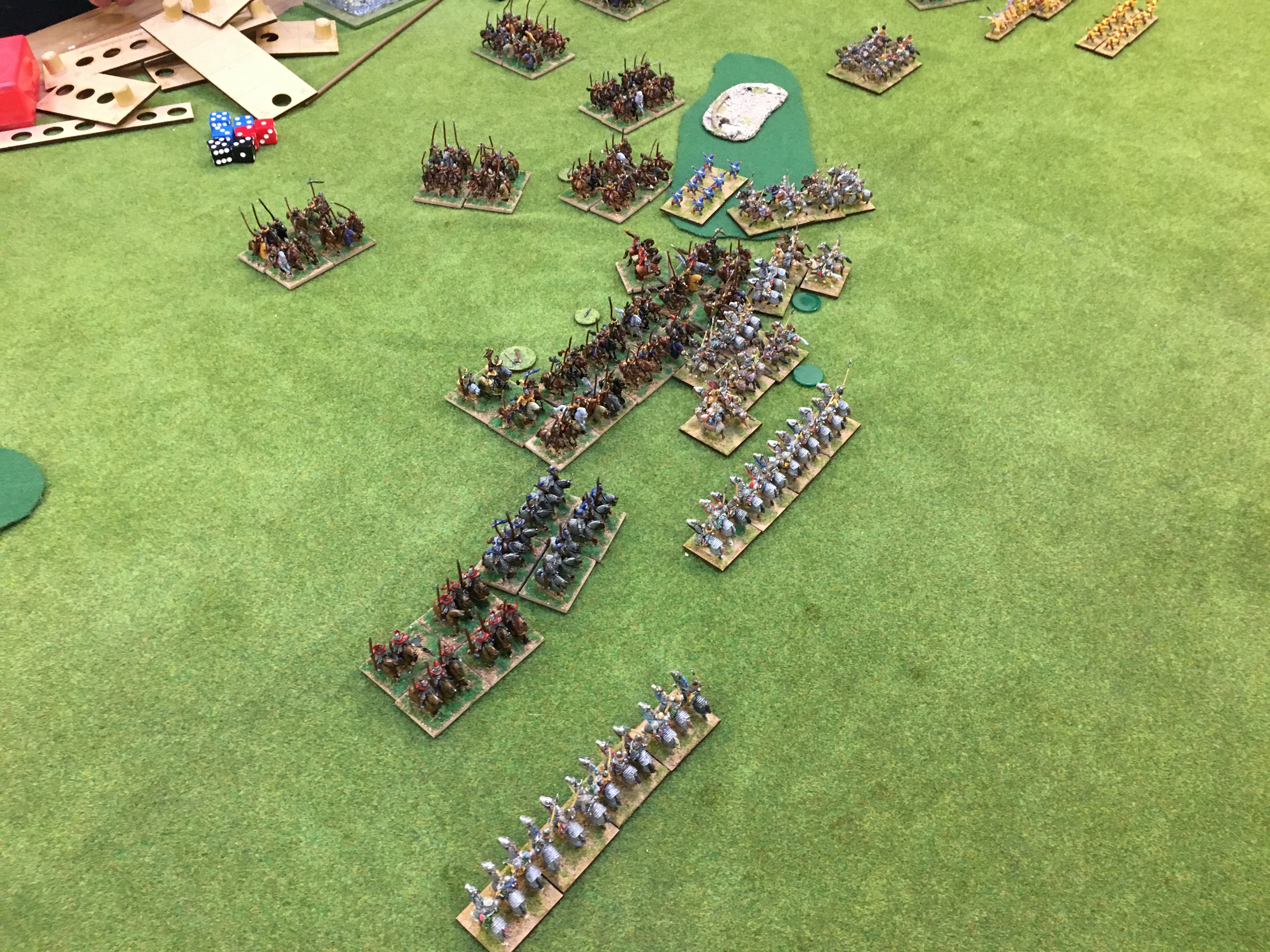 Fortunately I had a BG appearing on the flank of the action – as long as the LF could hold their ground.

The flank charge is delivered and Steve’s BG breaks. In the other melee both BGs are fragged. My pursuing cav has rolled up and is in serious peril whilst the LF have been charged by 2 BGs and are also fragged. 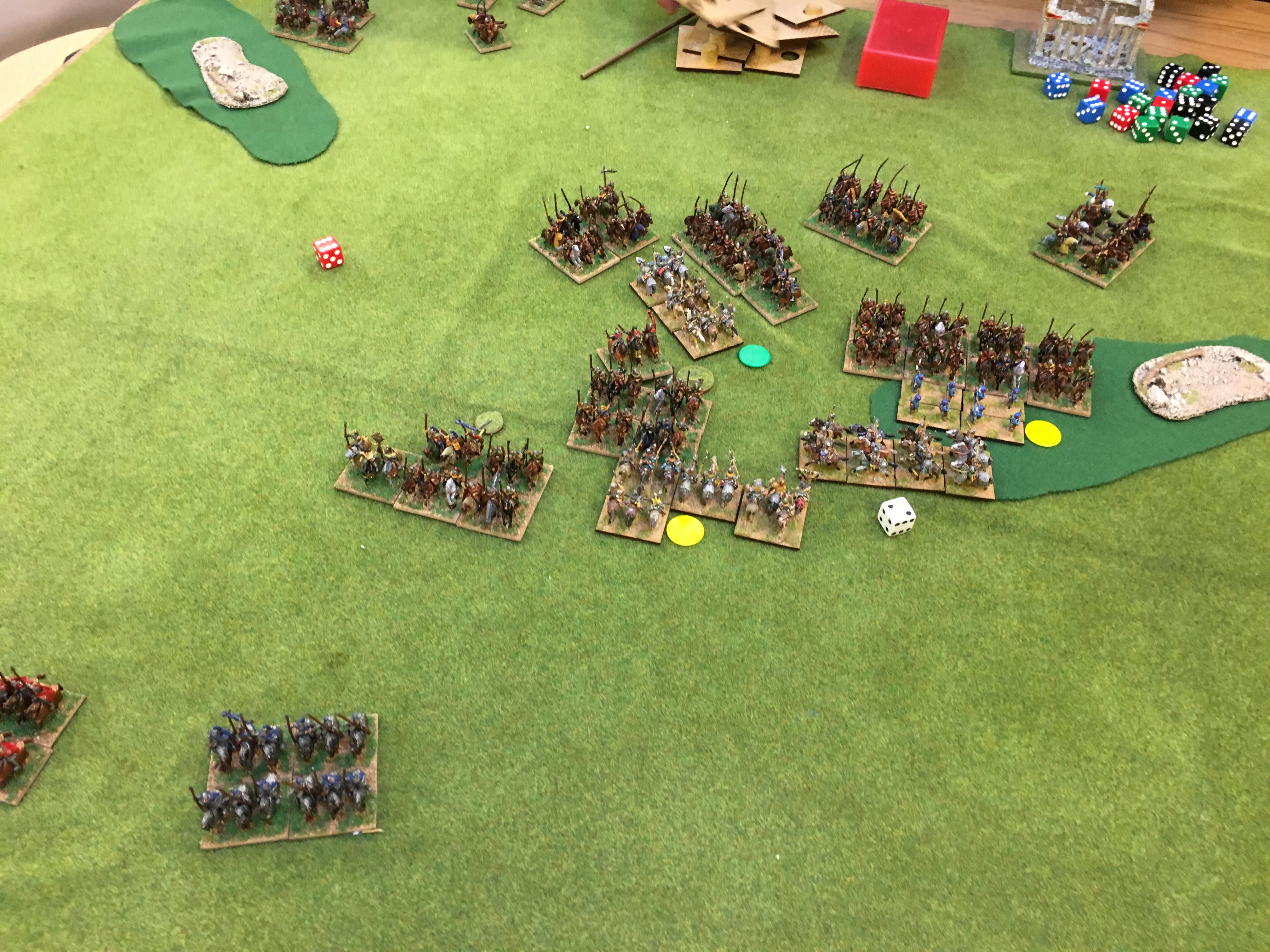 If the LF break my cavalry flank is exposed. If they hold I can deliver another flank charge. The Cats have charged away my Guard – another poor match-up for them. Whilst on my right we’re cleaning up but still worried about the flank march. 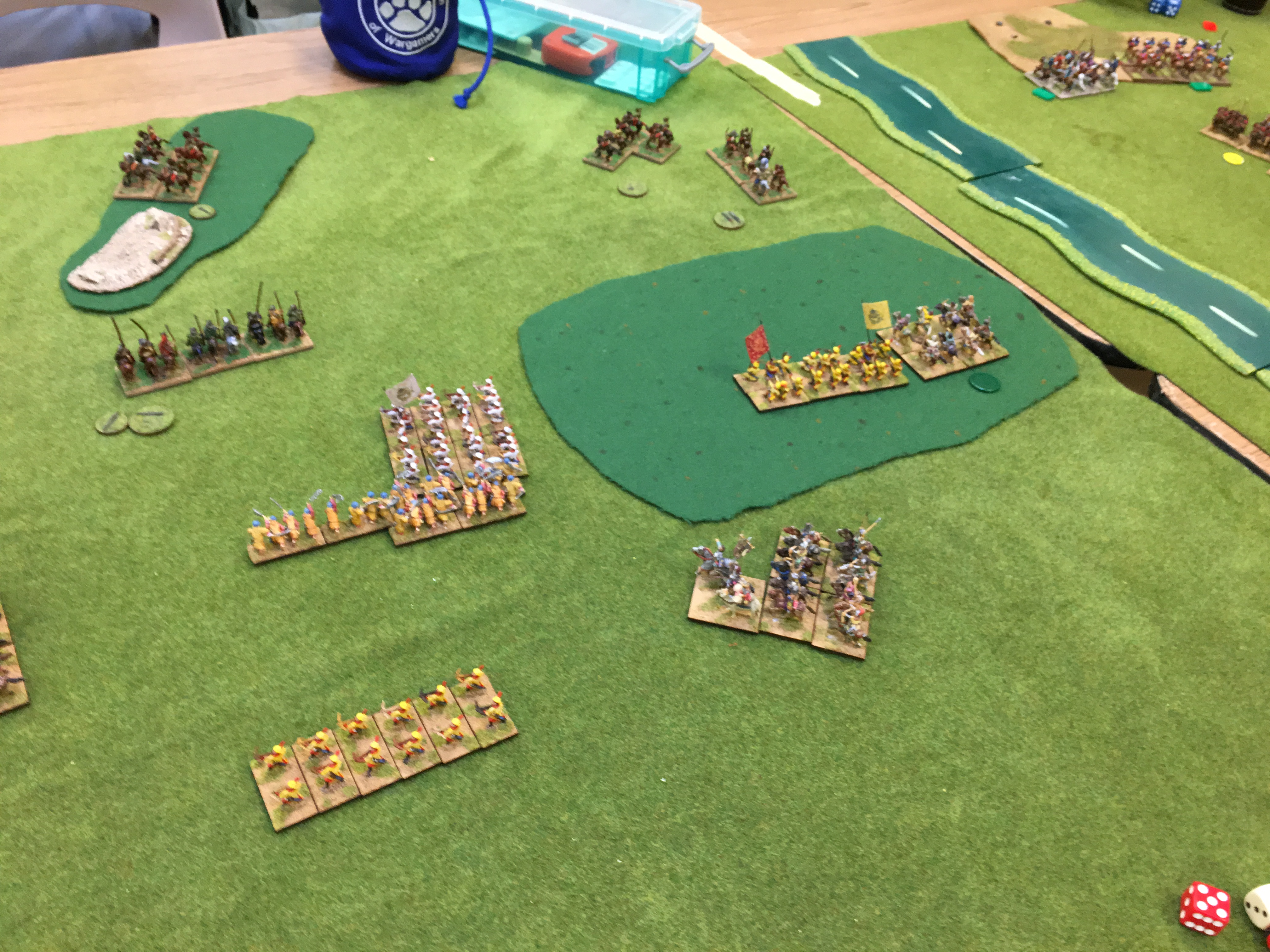 With the benefit of hindsight I should have ignored the fragged LH at this point but I was still thinking that the flank march could arrive and they might still be rallied so I sent my LH after them to finish them off. Should have gone for the camp instead.

In the centre the LF hold and another flank charge sees off another of Steve’s BGs. Fragged troops no longer pursue allowing my IC to rally my stricken BG. Unfortunately the hot headed pursuers have lost another base and drop to fragged. 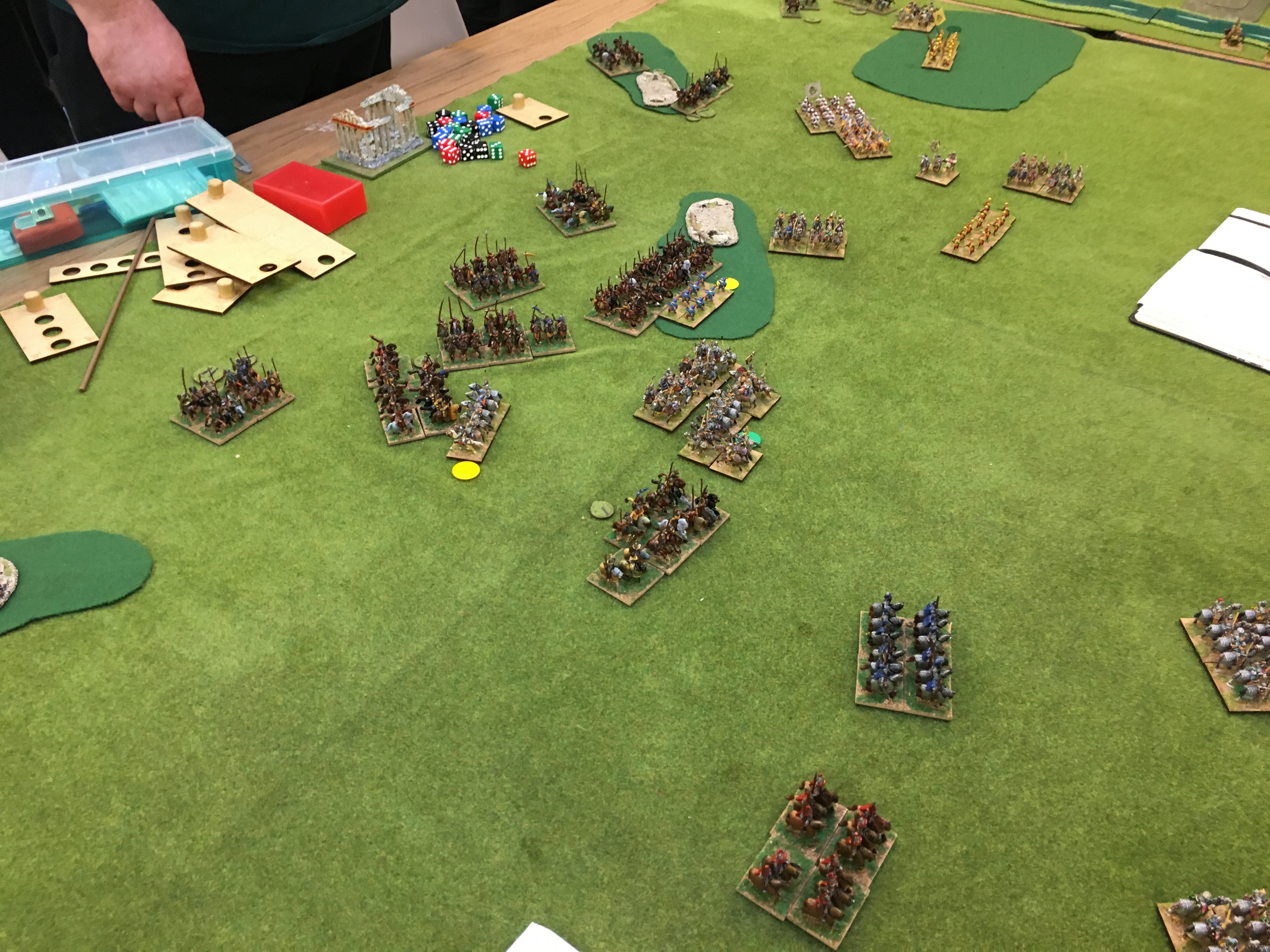 The pressure on my LF eventually told and they routed. Steve was also doing a good job rallying his other BGs including 1 that had routed. The weight of Parthian shooting was also being felt and it felt like things were starting to slip with 1 BG destroyed and 3 BGs in rout. Steve’s pursuit of the LF had exposed a BG to a flank charge and reinforcements were starting to arrive from the right flank. The Guard had got away from the Cats and were also ready to join the battle. 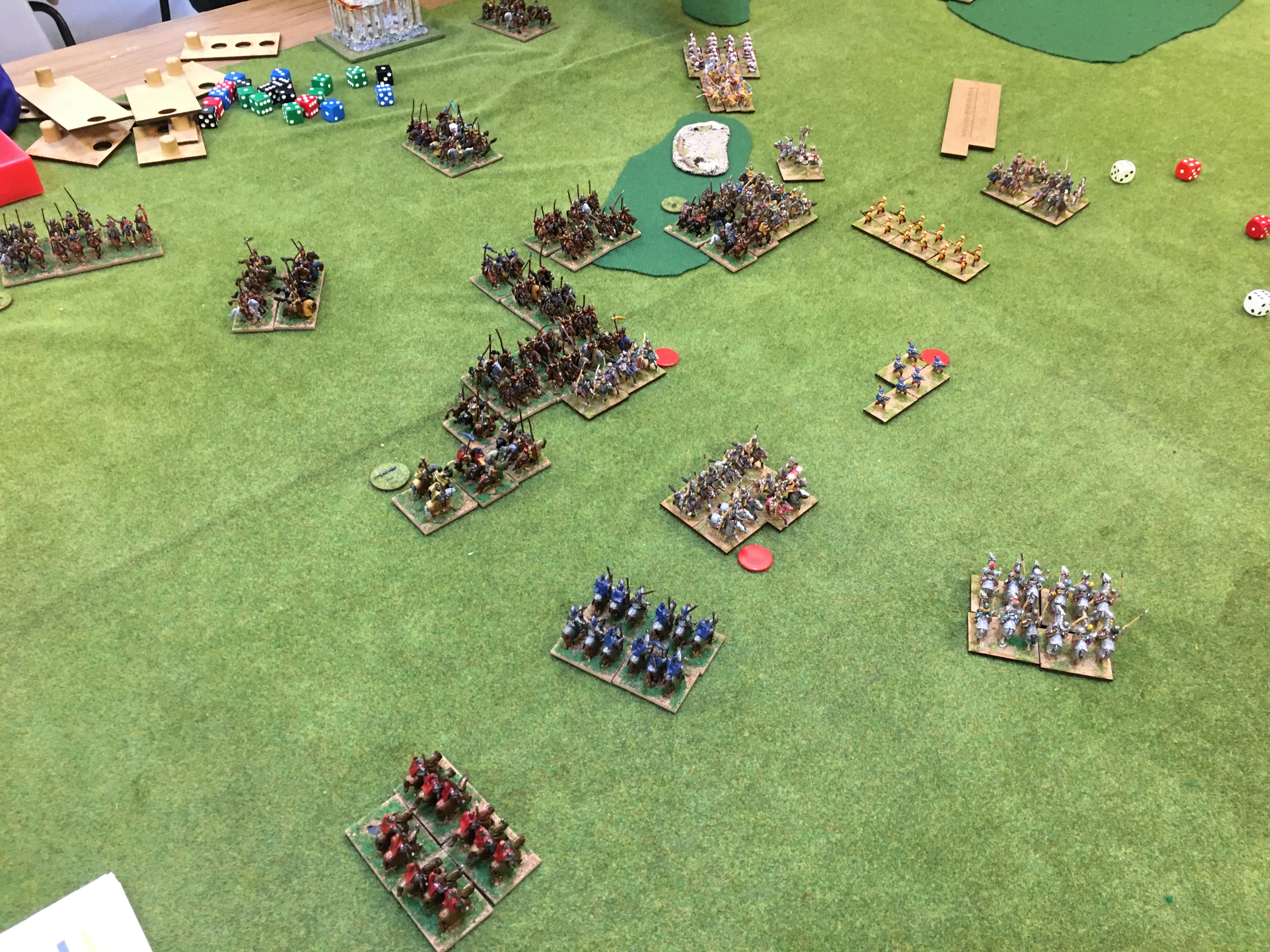 Our 3 hour are almost up and its been a cracking game. One last bit of concentrated firepower including the now rallied hand gunners would account for another 2 of Steve’s BGs. 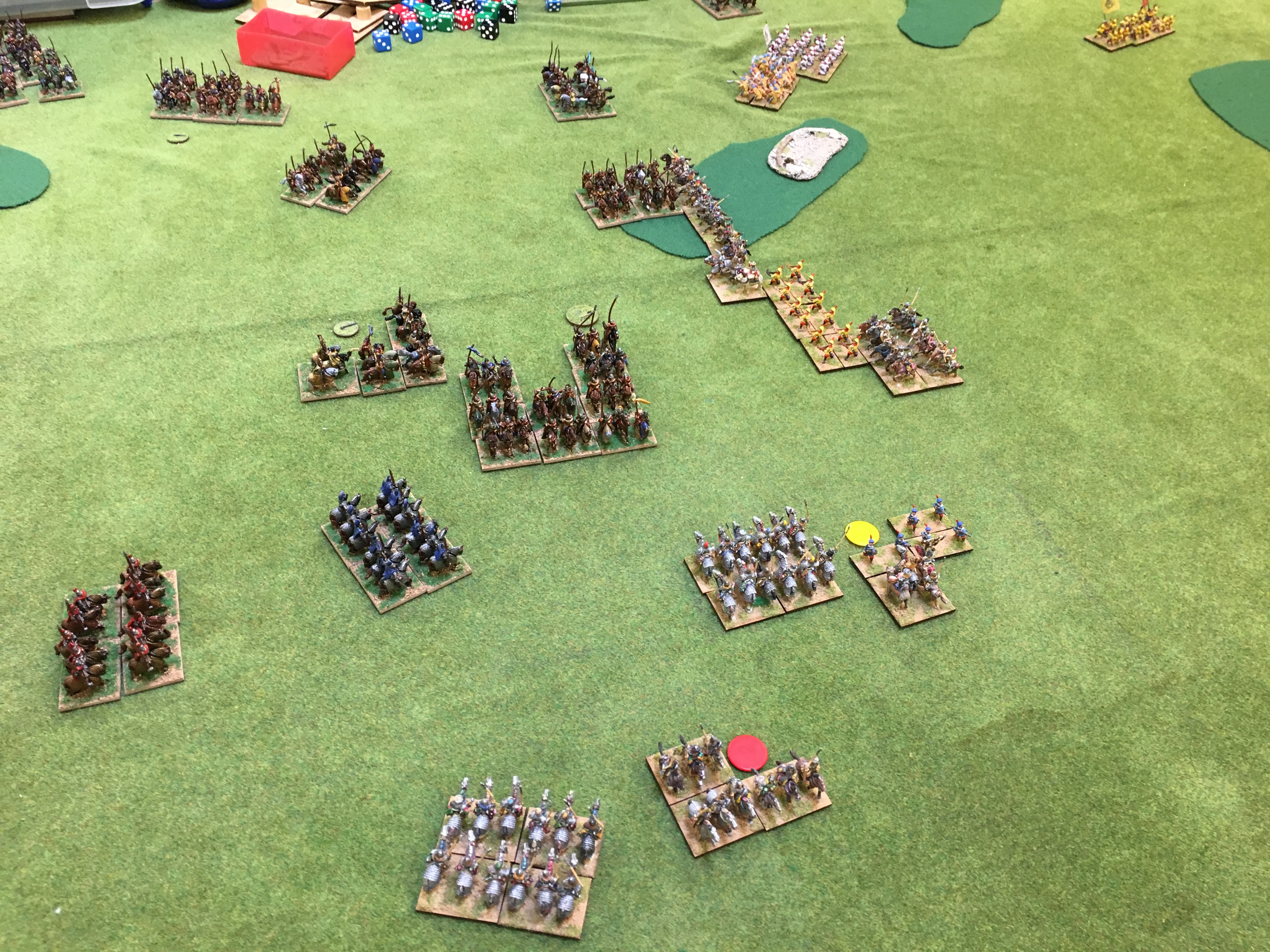 I think I got 13 of Steve’s BGs in the end and I wished the flank march had arrived so that we could have diced for straggling! I’d lost half of my army in the process and the final score was 17-14.

This was probably my most enjoyable game of the weekend – you can tell by all the photos - it was a swirling, whirling cavalry dogfight which could have gone either way - fantastic!
Pete
Top
Post Reply
1 post • Page 1 of 1