I continue analyzing unit by unit comparison in order to roughly estimate each unit's strength and weaknesses.

Lancer is an Impact abillity, while Swordsmen is a melee ability of the unit. There are only mounted units of this type in the game.

Dismounted Lancer units are also available however these are classified as Offensive Spearmen unit. 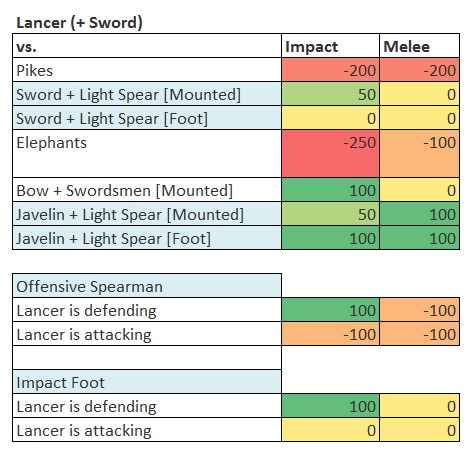 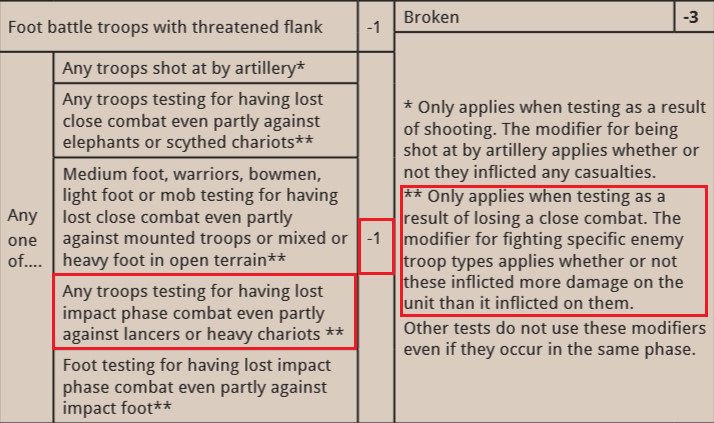 STRENGHTS: WEAKNESSES: Strategy:
Lancer seems to be flanking unit (thanks to its mobility) and able to disrupt flanked enemy easier (thanks to -1 Cohesion Test modifier applied to the enemy). It can be OK in melee also against most swordsmen units given its quality. However it should avoid frontal attack against Spearmen, Pike and Elephants at all costs.
More ideas in this thread:
viewtopic.php?f=477&t=85111

One of the most overlooked qualities of lancers is their ability to essentially paralyse almost any attacking infantry that aren't pikes, and they can even hold up the pikes for a while in desperate circumstances. Lancers get a major advantage against most kinds of infantry when the infantry charge. They can then disengage and simply re-ZOC the attacking infantry next turn, allowing even a mediocre 48 point unit of Noble Lancers to render even the likes of the Praetorian Guard or Superior Warbands essentially useless. As long as you can protect them from skirmishers and other heavy units, cheap lancers can paralyse the best elements of your enemy's army while your own elites go on to win the battle. Just don't let them get pinned against something so they can disengage.

Because of this impact disadvantage, it is also extremely difficult for infantry to rescue disrupted cavalry which have been engaged by lancers. If a warband tries to attack a unit of lancers to force it to disengage a unit of noble cavalry, chances are good that the warband will just end up disrupted and in trouble too.
Top

Lancers achieving a breakthrough can be spectacular and deadly able to kill, especially when fighting at an angle to the main front line. They are very capable of killing successive units due to pursuit. Like all horse they are vulnerable to bow fire, unless of the cataphract variety, but due to their large move should only endure one or at most two rounds of bow fire.

It is probably outside of the scope of this serious, but good, analysis to say they are one of the most fun troops to play with. Let them loose and anything can happen. But others will use them more scientifically than I do.
Top

Thanks guys for the comments, really useful info
Top

I’m having trouble with lancer armies though because they cost a lot and gets swarmed. They are difficult to use against bow armies and (ironically) mounted bow armies.
Top

jomni wrote: ↑
Mon Nov 12, 2018 1:12 am
I’m having trouble with lancer armies though because they cost a lot and gets swarmed. They are difficult to use against bow armies and (ironically) mounted bow armies.

Even lancer-based armies usually have a generous skirmisher complement and some cheap infantry you can chuck out ahead of your lines. A few units of medium infantry could also help flush those irritating massed archers out of their hiding places on the flanks. Warbands will do in a pinch, but they're expensive...
Top

Thanks. Not with Northern Dynasties of Silk Road. Though I may try to bring more cheap infantry next time as you have advised.
Top

Thanks again, Lebo44, for creating these threads. I like both your tables and the discussions developing from them.
Top

jomni wrote: ↑
Mon Nov 12, 2018 1:12 am
I’m having trouble with lancer armies though because they cost a lot and gets swarmed. They are difficult to use against bow armies and (ironically) mounted bow armies.

The crossbows widely deployed in the Silk Road mod are devastating to cavalry. In my recent game with nyczar, I made pretty good use of this newly realized knowledge. Even against cataphracts, the damage inflicted was tremendous. They really took the starch out of some dangerous units.

Found on Steam forum (by SnuggleBunny):


Cataphracts are very capable troops, but their slowness makes the makes them a little hard to use. For one thing, they can shrug off missile fire thanks to their armor. If they can catch enemy cavalry or skirmishers, they can crush them; one strategy is to force an enemy cavalry unit to engage with some of your lighter troops, and then hurl in the cataphracts once they are stuck in melee and can't evade.

Cataphracts can also plow through Light Spear/Swordsmen infantry types that can resist less heavily armored cavalry, along with massed archers and the like. They do fairly well on imoact vs the Impact Foot types, especially the less high quality ones.

They can be used be simply parked in front of an infantry line to lock down movement on that part of the field; infantry charging shock troops do rather poorly. Then you can either pelt the footmen with missiles, or win elsewhere on the field. Finally, being cavalry, cataphracts will pursue fleeing foes and keep on the charge. Angle your attack well, and these armored beasts can crush a few units rapidly.

But yes, they have weaknesses; elephants easily defeat them, and they cannot evade. Field artillery can cause punishing losses to them. They are slow, and have difficulty catching less heavily armored cavalry and even, sometimes, infantry skirmishers. Finally, they tight formation and heavy armor makes them Severely Disordered in even rough ground, which only Moderately Disorders other cavalry. They can be a good supplement to the army, but at 68 each, they are too expensive to build a line around.

Ludendorf's tip of using cheap lancers to basically paralyze expensive infantry is my main use for them. For non shooty but chargy infantry like warbands and elite legions they completely counter them.

They are not my favored flanking unit (flanking unit only needs to be drilled, non lights, that are fast. They don't even need any weapons, therefore the old Indian Poor Cavalry that cost 22 points only was the flanking champion). Lancers are too expensive for flanking! I think bow/sword cavalry are better flankers (you basically don't need any impact capabilities when flanking, since you are +200 automatically in the impact phase when charging a flank) Plus the bow makes it so that even if the enemy turns to face your flankers, you can just concentrate fire and riddle them with arrows till they take cohesion tests

Also the Silk Road Northern Dynasties conscripts do give me headaches, as Jomni has observed in some of our last games.

1. In a melee or even a charge, my more expensive chinese infantry somehow are evenly matched ??!! Their heavy weapons do poorly against a cav charge, but Chinese cav are all tied up trying to ZOC or counter flank the Northern Lancers.
2. They have 16 figures, with great arrow catching and melee lasting power.
3. They are unarmored, which means crossbows don't do as well pound for pound against them (as compared to cheap bow armies, but Chinese armies are crossbow based for many periods).
4. The light artillery that is a big feature of Chinese army can't do jack against those conscripts. Yes they are a large target, but they have 0 armor, and the armor piercing capabilities is completely wasted. Much better for the artillery to shoot at those Fully Armored, Expensive, Elite Cataphracts that also happen to be a small unit that can't soak casualties. Ballistae bolt kills Fully Armored trained noble noble just the same as naked conscript who picked up a halberd.
5. Also when the Chinese army is playing hide in bad terrain, your medium foot conscripts can safely engage, providing a flanking opportunity for lancers.

Thankfully, I don't think the Northern Dynasties lists gets too many of these conscripts. I think of the "Chinese" lists, the Lancer heavy Northern Dynasties will fare FAR better against the Indian or Persian lists (massed bow armies, where the heavy armor comes in use). Chinese crossbows will get outshot by cheap Indian archers. We need to wrap up our reunification wars before we can try out some cross cultural exchanges in the rest of the map.
Top
Post Reply
11 posts • Page 1 of 1