by Wulfburk
This mod seeks to bring to Field of Glory Empires, the immersion, the authenticity and the looks from the Rome Total War and Medieval 2 Total War mods, Europa Barbarorum, by changing faction colours, the soundtrack, unit and faction names, and more.

The mod is NOT multiplayer compatible.

Check the Post Below for instalation instructions and more information

-Thanks to the EB mod team for making the game that got me really into ancient history, and for all the good times after playing EB1 and 2 for over 10 years!
Check their website and forum if anyone is interested!

You can download the first version of this mod here:
https://mega.nz/#F!FMMBVITa!lbm6MLmAvS3NICn5-pmOpw

Warning: this mod is not multiplayer nor savegame compatible!

Major additions/changes:
- Changed most factions' names to a more historically accurate denomination;
- Changed the faction's colours to resemble the Europa Barbarorum faction's colours;
- Units' names changed to more historically accurate names taken and inspired from Europa Barbarorum I and II;
- Various units' visual changes (Hellenistic phalanx units now use the Pikemen model, no more Indian units in North Africa, Hellenistic infantry now uses the Thureophoroi model, and some more);
- Arabian factions and Arabic Peninsula regions are now Semitic;
- Changed the Boioi faction culture from Dalmatic to Celtic.
- Roman infantry no longer has skirmishing ability (not only makes them even more overpowered in battle, but it also makes no sense to give them this ability just because of their use of pila, considering a lot of warriors carried javelins to battle in Antiquity).

I think that's all, for now.

Known bugs:
- The Tamud faction starting army starts with a couple of Numidian (Desertic) units. I tried everything but couldn't fix this. It's no big deal, though, as they can recruit semitic units normally;
- The Diadochi factions revert to their vanilla names when their custom ruler dies (fixed in the next version);
- The Iberian factions have access to the Gallic/Celtic unit pool.

If you find any bugs, please report them! Enjoy!

by Wulfburk
Well i was thinking of doing so but in contrast to the faction names, unit names seems to be quite a lot of trouble to change lol. I also havent changed the region and city names. If anyone do wants to do those changes we could certainly make one big mod, joining my few files to the others too.

One problem that may happen is if these standard names Regular Infantry, Warriors and etc, are shared between all factions in FOG E. Im not sure it is but id guess so. So for example if i change Regular infantry to Thureoporoi, then everyone in the world would get Thureoporoi? it would be quite weird.

by Bercor
Actually not sure about that possible problem, I'll try to experiment a bit with changing a few names and I'll get back to you!

by Bercor
Ok, so after tinkering a bit with some files I found out that it’s fairly easy to change the units’ names, you just have to mod the corresponding text file. The names are shared by factions’ groups (so, hellenistic, itallic, etc), but it is possible to have/create unique faction units (Silver Shields for the Diadochi, Legion for the Romans, etc). I think I’ll start changing some names then!

by Wulfburk
ah good to hear! Is it simply changing Text32.txt then? If you need any help for some names just say so. now that you mentioned it having accurate unit names would be so much better indeed.

by Bercor
Exactly, you just need to change the Text32 file. Here's the new names for the Celtic group, for example: 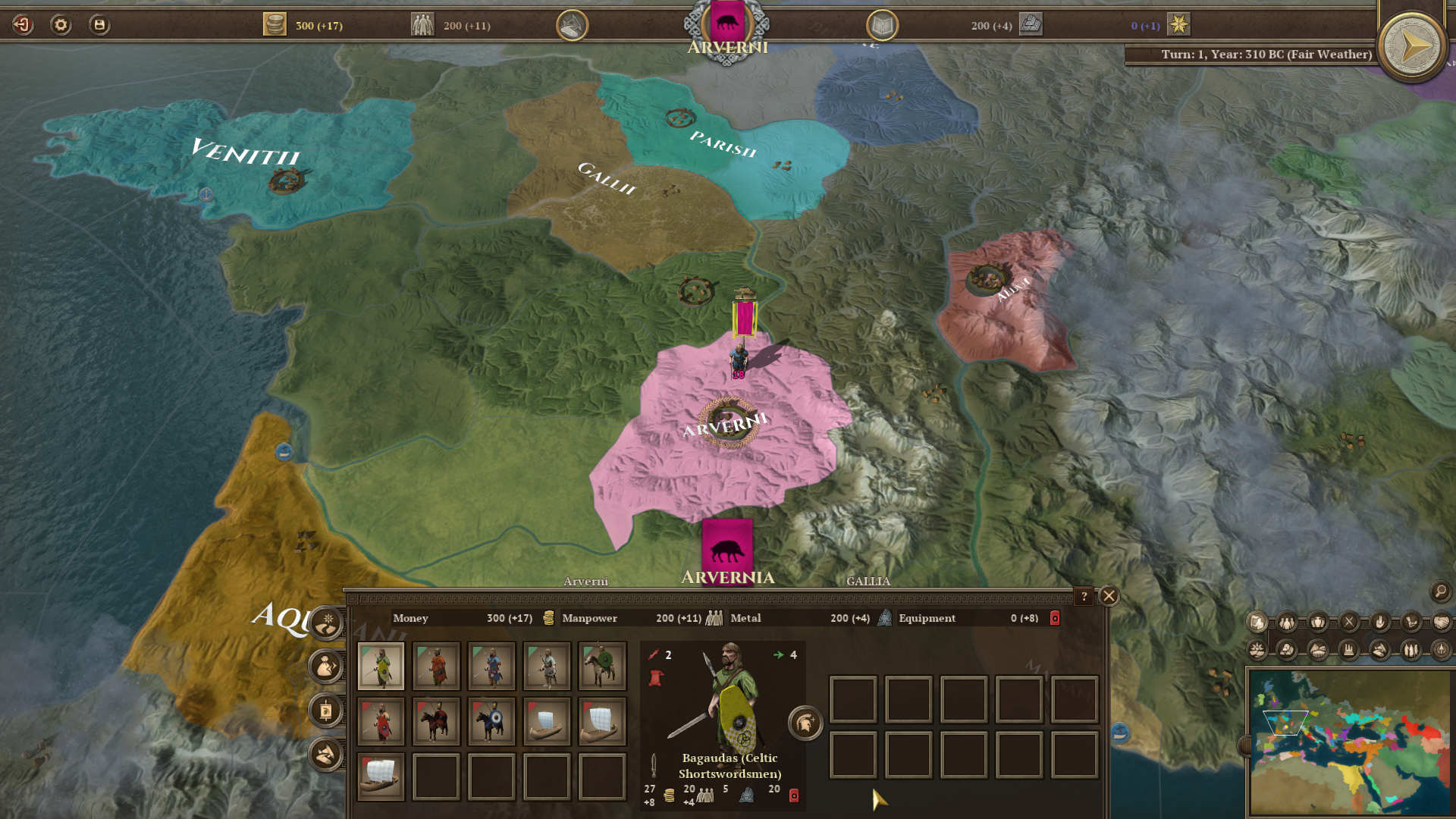 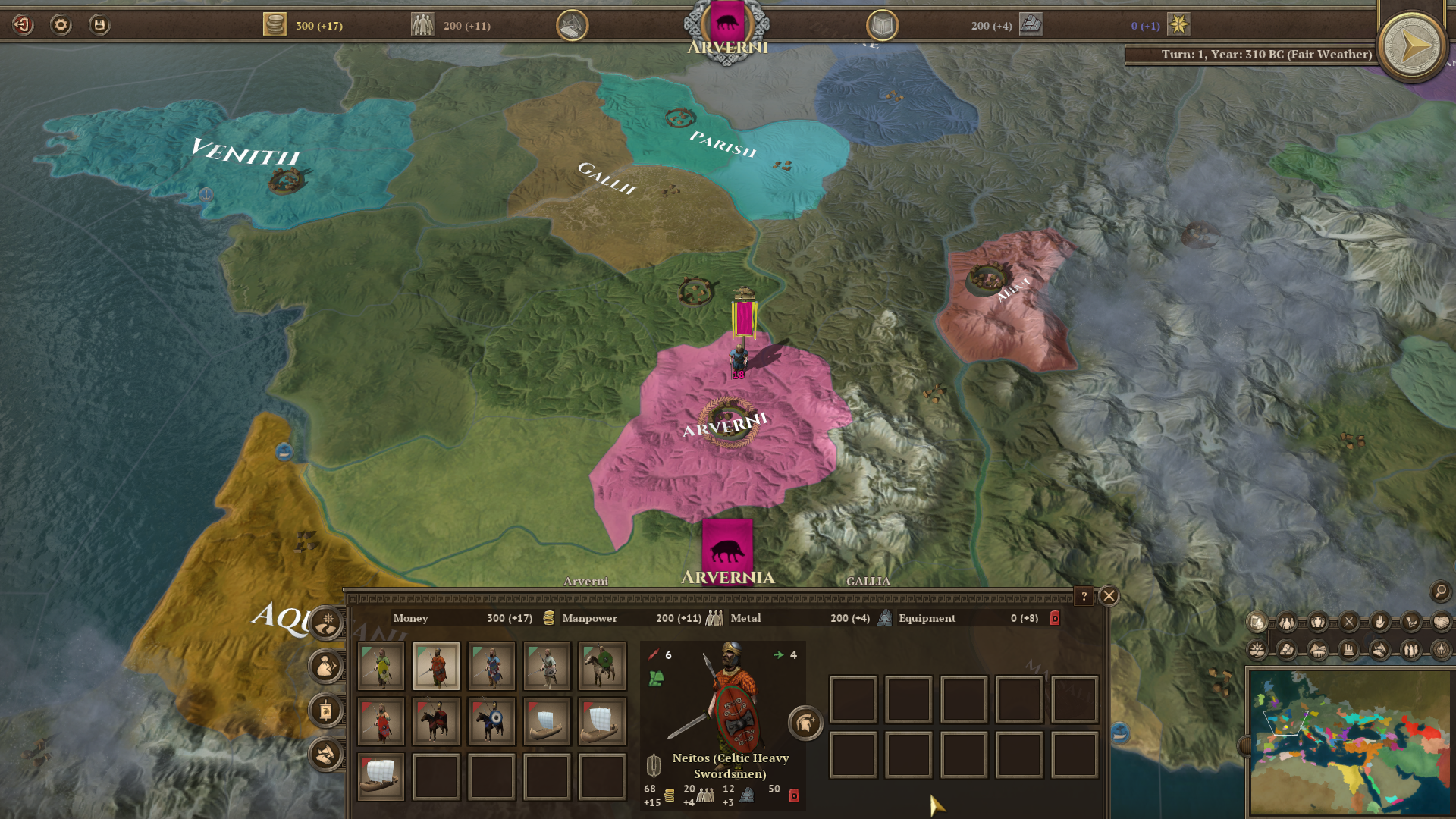 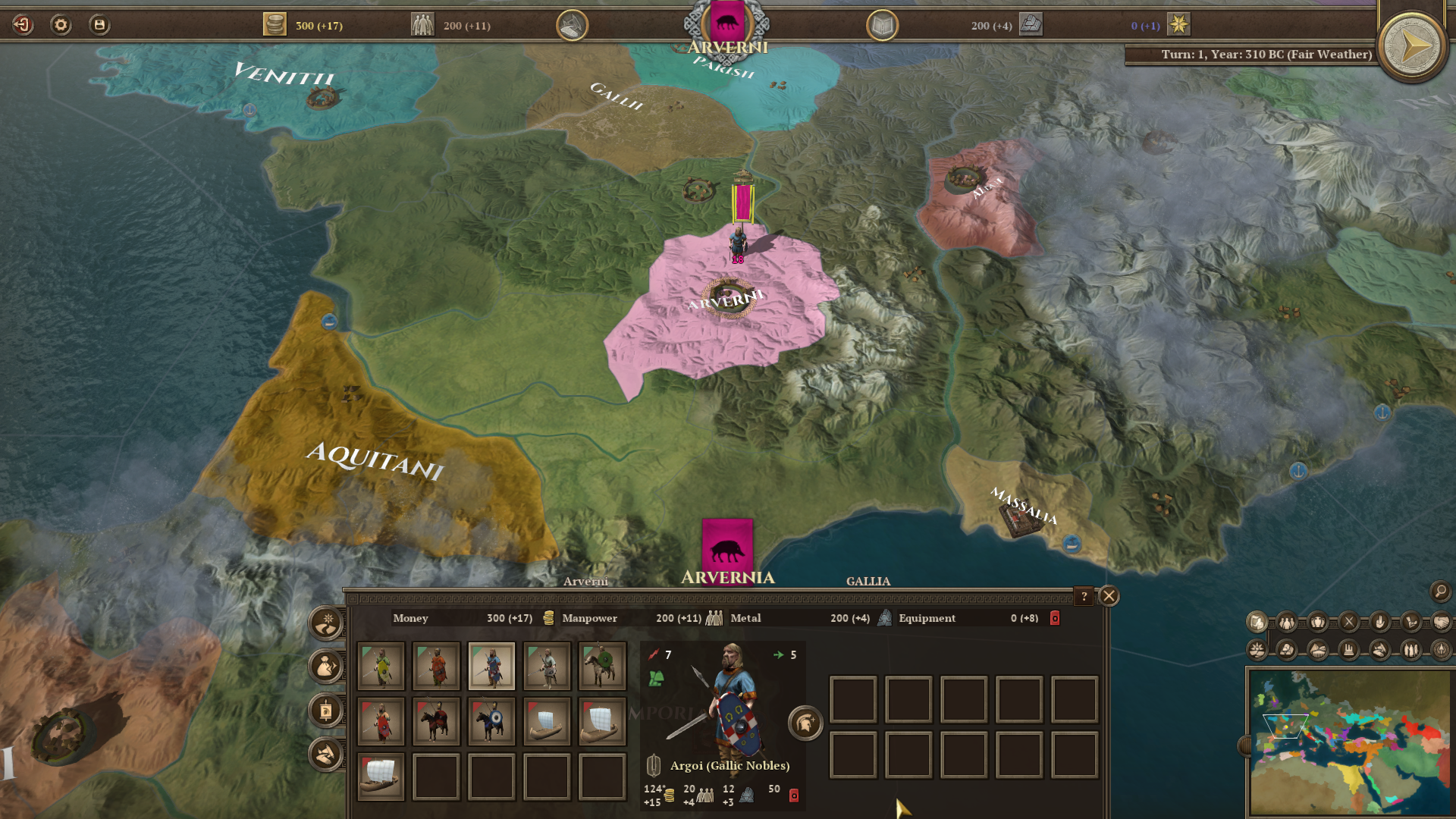 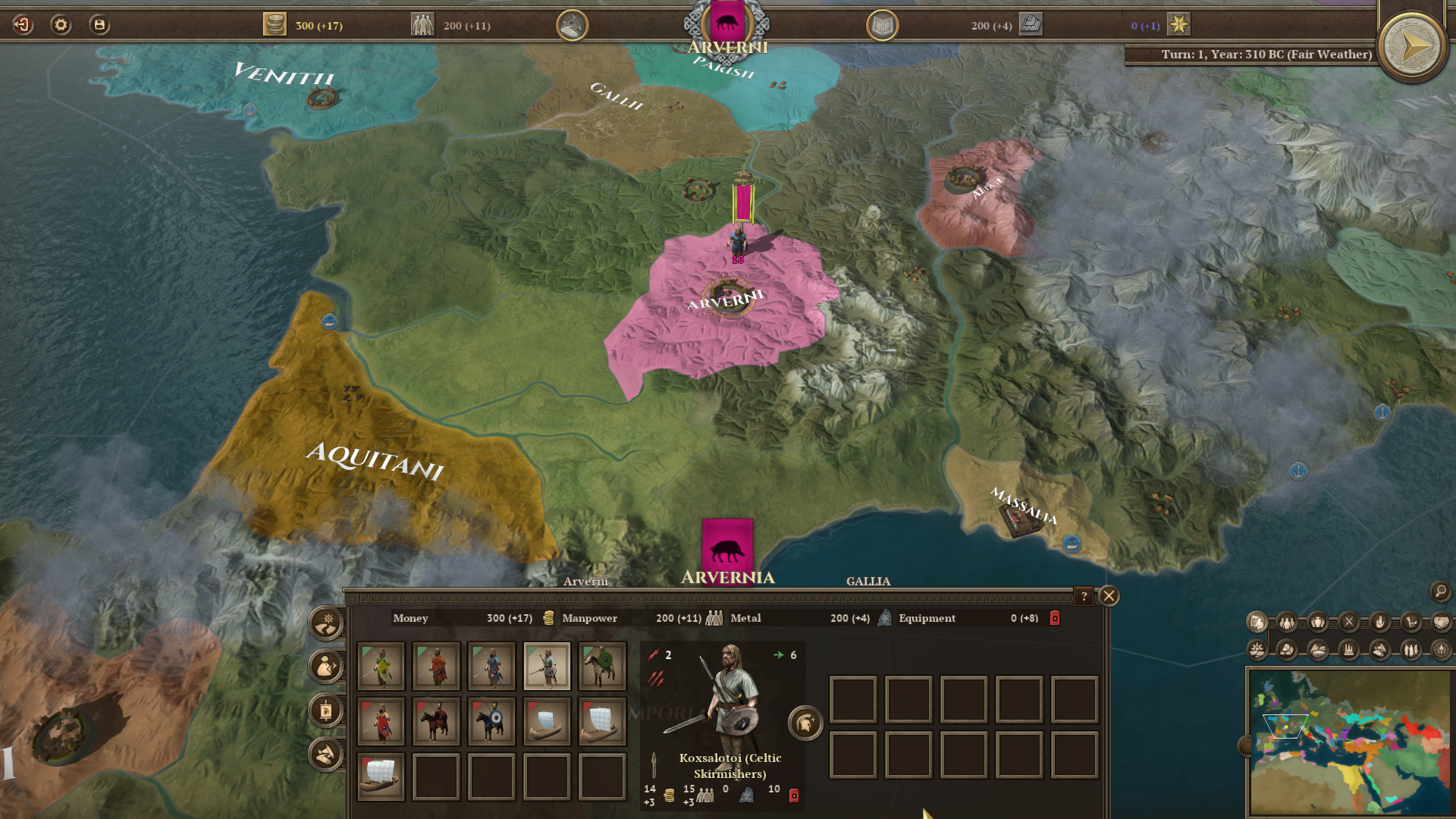 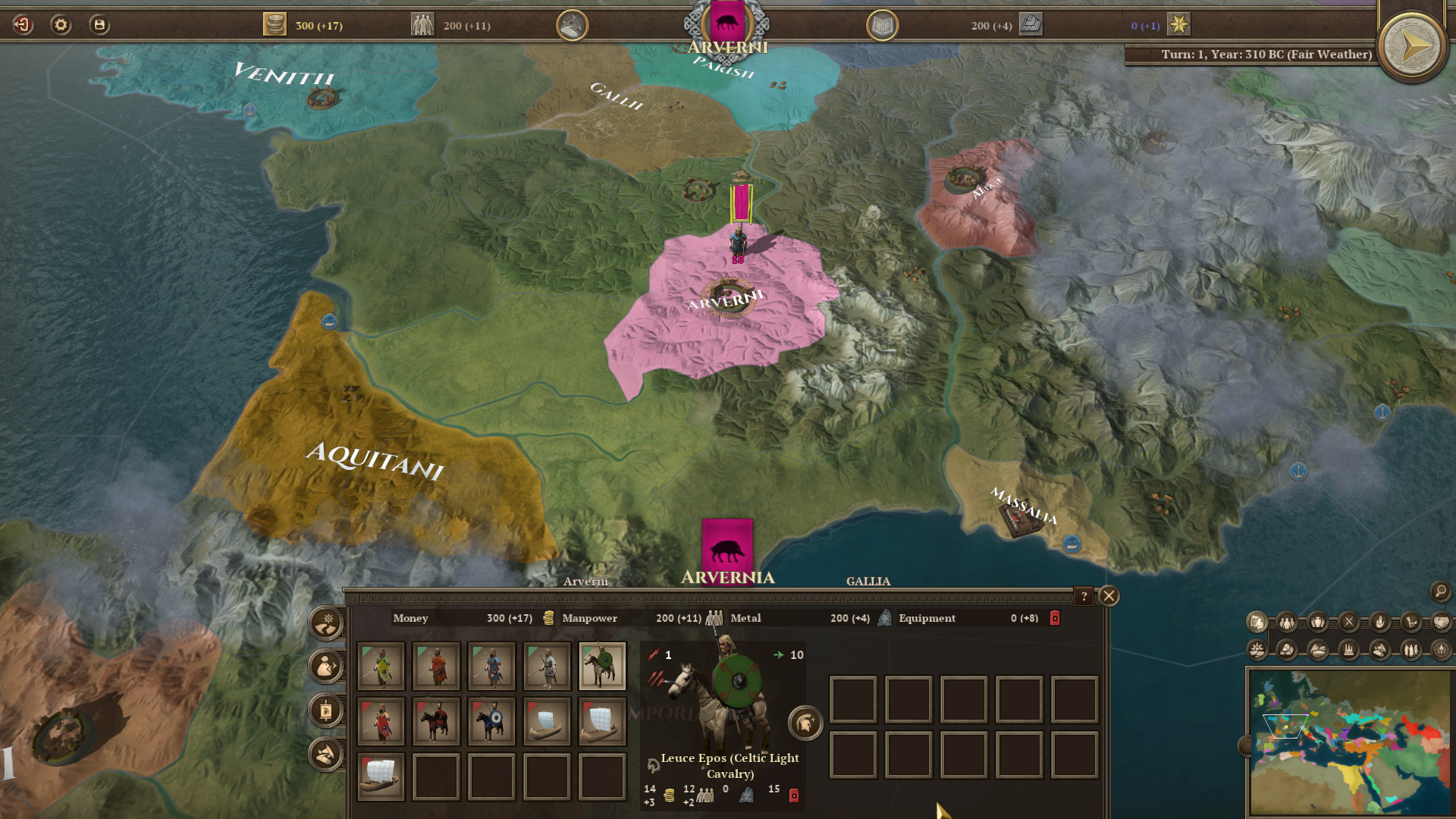 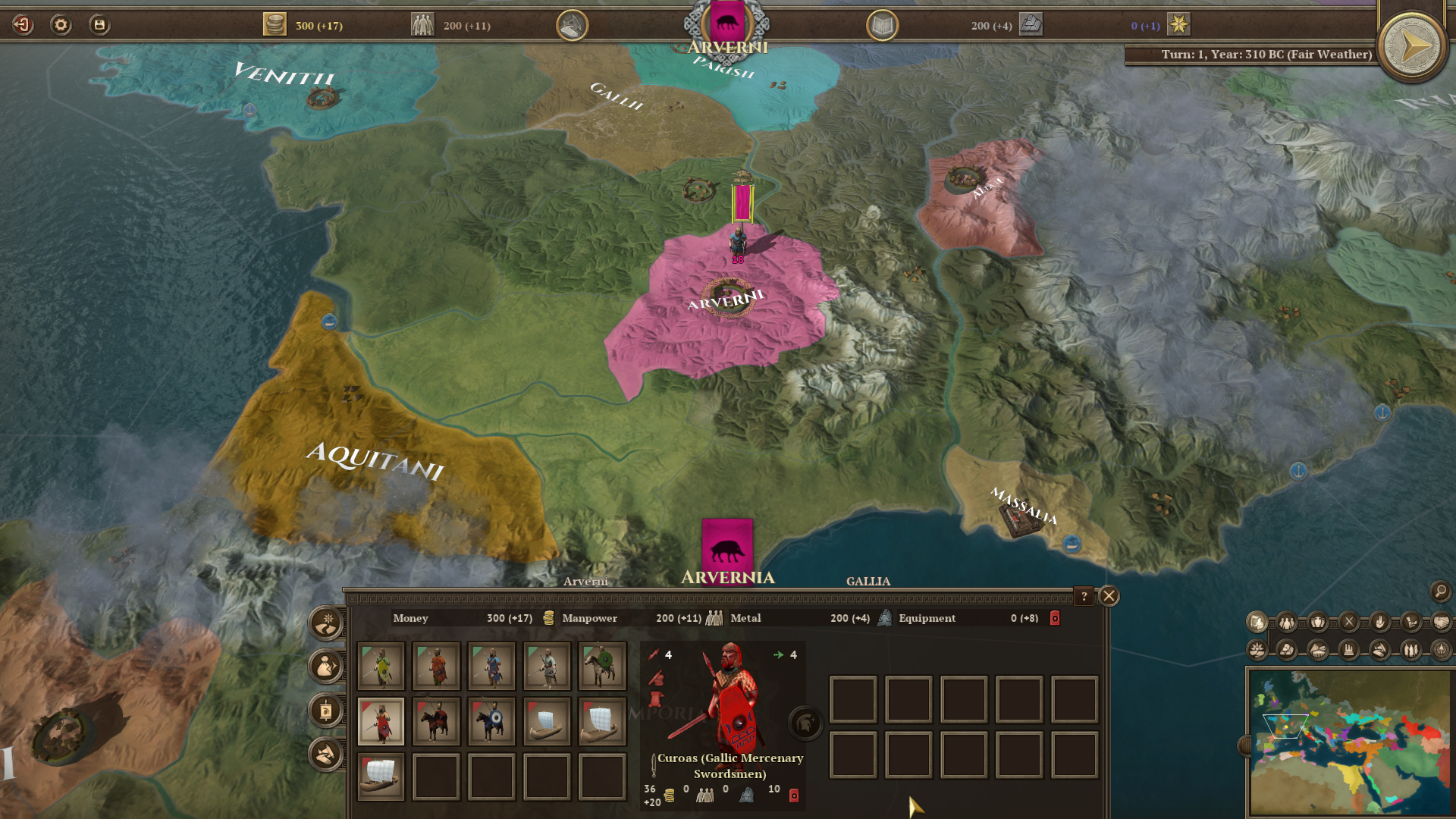 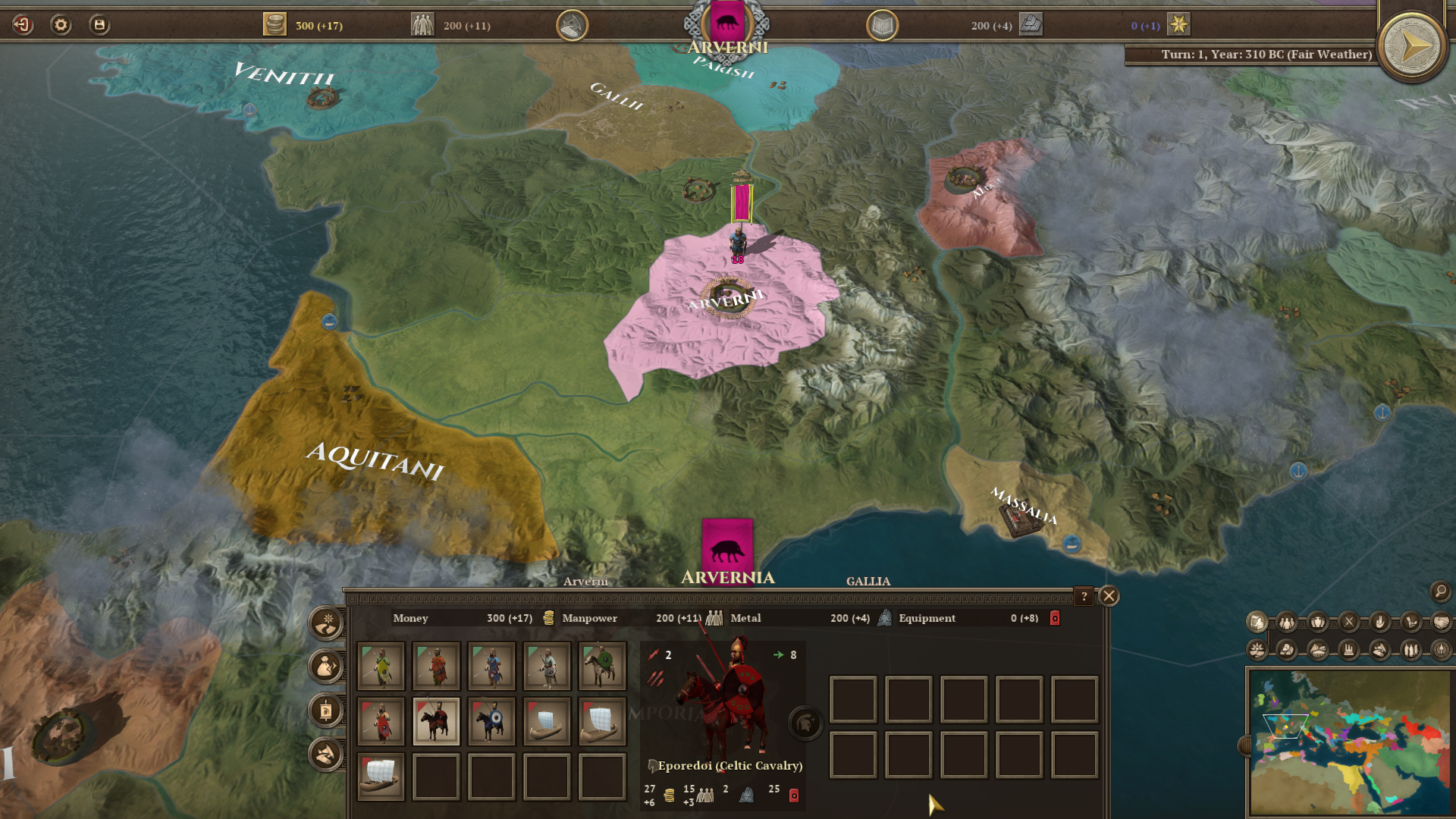 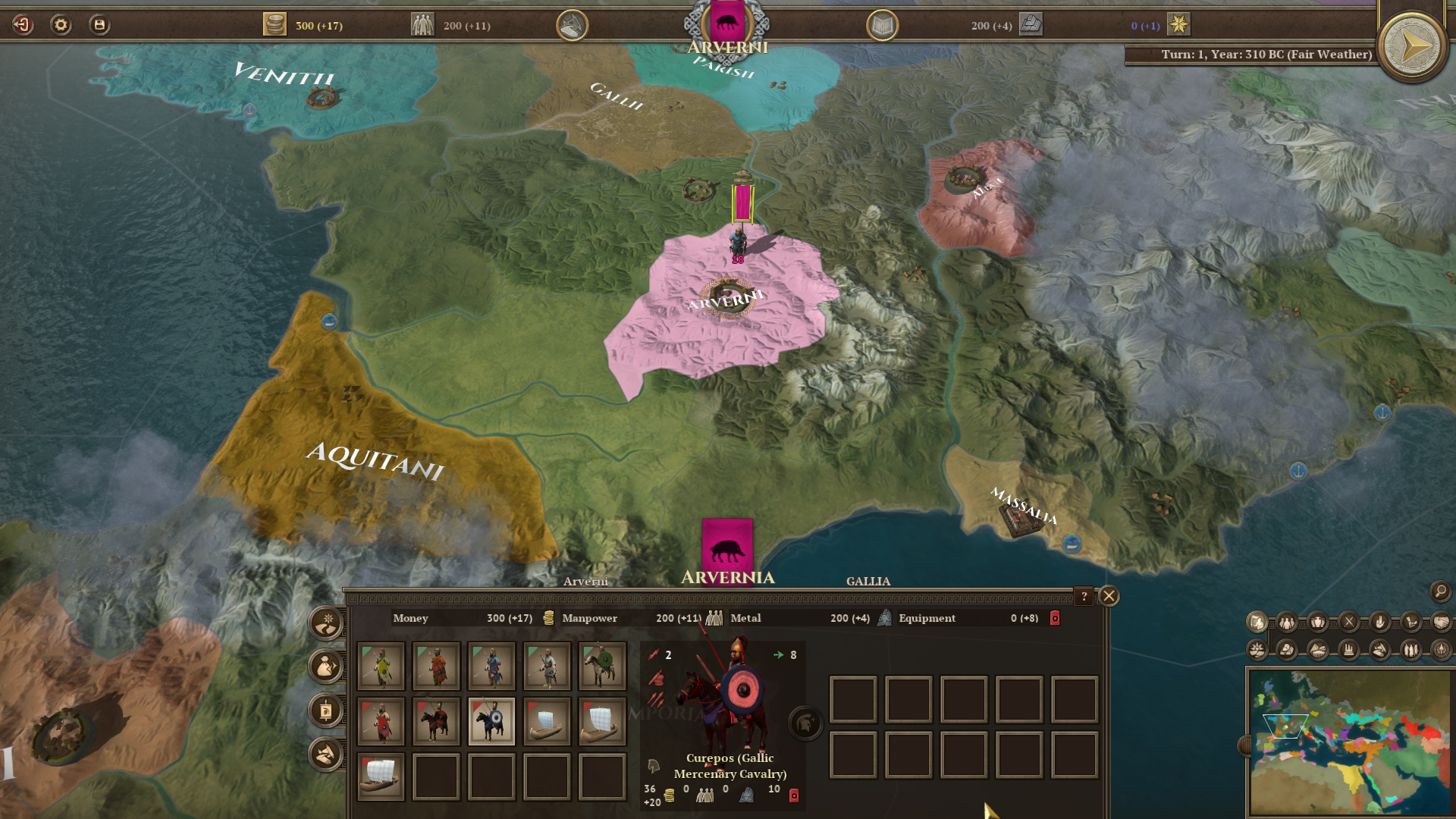 I got most of them are from EB 1 or 2, with some slight adaptations.
Ideally, if I can find out how, I think it would also be nice to slightly change the units/models textures to something more accurate (for example, the Gallic Nobles look way too much underarmoured).

by Wulfburk
Looking good! Im making some further changes to the names and then i'll post here a link to my files. And when you are done i can edit the OP with your files as well, or perhaps you can join all files on one single folder and link it, either way. Afterwards we can also post on the steam guide tab with the mod information.

by Bercor
Sounds good! Maybe we should divide the work between us then, just so we don't end up unecessarily overlaping each other changes. There's 12 culture groups (plus the national units and the provincial units), so maybe I'll change the first six and you'll do the last?

by Wulfburk
Alright sure! Are you doing one unique name for the non improved version, and then another different name for the improved one? Or just, for example, Hoplitai (Hoplites), and then Hoplitai (Improved Hoplites).

by Bercor
I'm doing the same name for the two versions (withou adding the "improved")for two reasons: first, for most culture groups is quite tricky to find a improved progression of a given unit, as you could for the Hellenic group for example; secondly, there's a limited number of space before the name becomes too big to read correctly in-game, as you can see here: 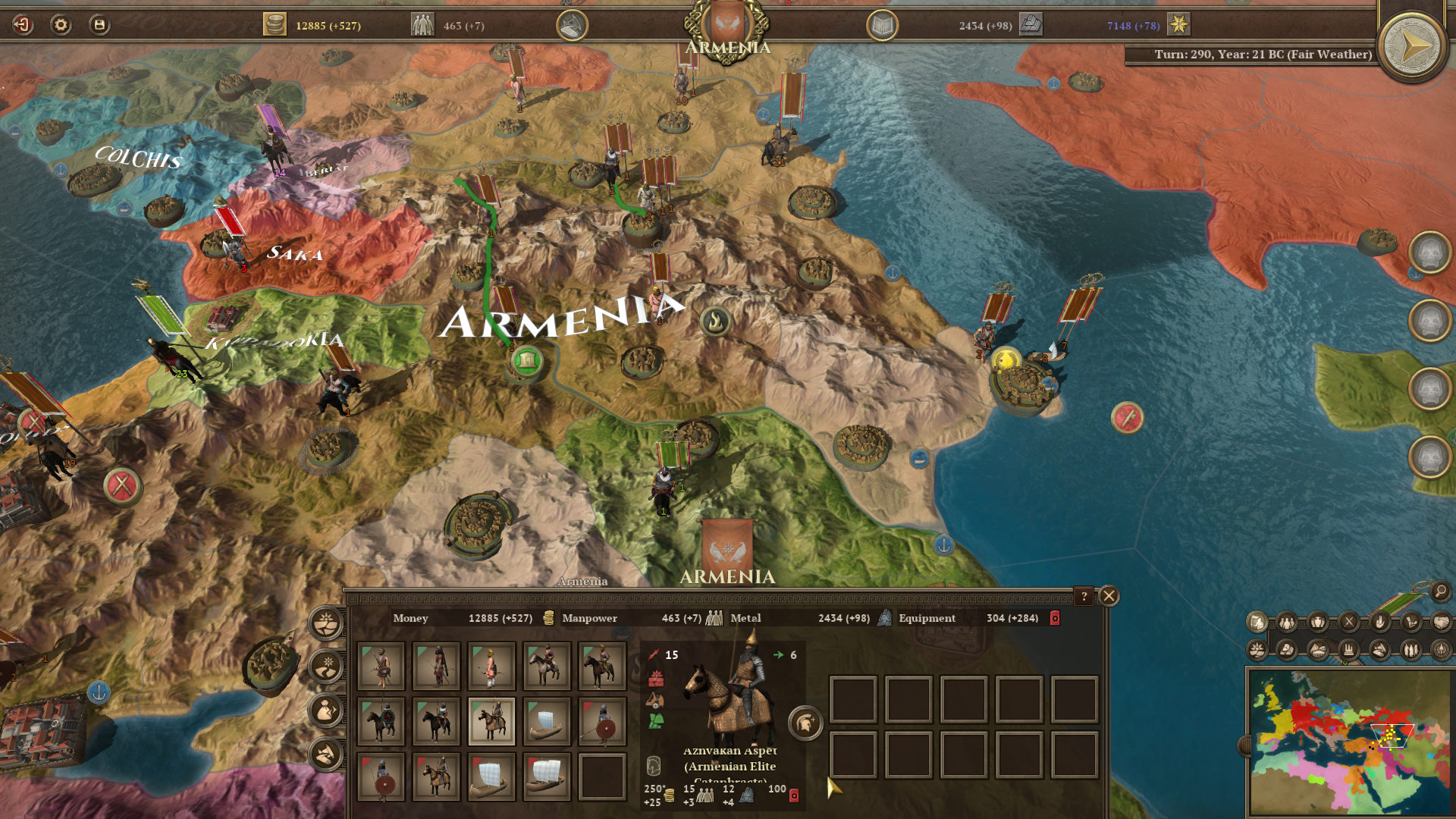 Given that the "improved" unit is basically the same unit with just a few buffs, I thought it wasn't essencial to mention it in the name.

by Bercor
Good! I've also finished the first 6 cultures by the way, here you go:
https://gofile.io/?c=UHbkcQ

I've also added my UNITVISUALS.CVS file, since I made alterations to a couple of units to best fit the faction and name.

by Wulfburk
Alright ive done my changes. Here are the files, with your changes in text32 as well.

I havent got the time to check for duplicates though, for example if i wrote one of the unique or provincial unit names, the same as one of the culture names you've wrote. Do you think its ok if it happens or? Either way take a look and if you got any more ideas or changes to make do go ahead! I'll be rather busy this week until friday sadly.

But when you are ready we can "officialy" release the mod xD. Im still awaiting permission from the EB team for the soundtrack, but we can add that later on regardless.

by Bercor
Finally finished reviewing the file! Made quite a few small alterations to your work (just to make sure the names were all coerent between them), but I think it's great now. Amazing job with the provincial units' names, by the way, that's must have took quite a lot of investigation. Anyway, here's the file:

I've also added three other files I've been modding:
- RegionPanel.txt with increased space for the units names (so it doesn't cut the sizable names like in the screenshot above);
- SQUADS.CSV, in which I fixed some vanilla bugs in regards to some units zoom;
- UNITVISUALS.CSV, with yet another few historical alterations to the units visuals (for example, the Hellenistic Phallanx model is now an actual pikemen instead an hoplite with a corinthian helmet).

I guess, the next step would be making an major overhaul of the units visual look, as many of them are not really historical accurate. I don't know if you know the Tabletop Mod for Field of Glory II (totally recommend), but it has a lot of variation in unit textures we could possibly integrate into Empires. I sent a pm to the mod's author asking permission to use his work in our mod, so let's see what he says!

by Wulfburk
ah noice! I had forgotten about fixing a few mistakes i had made so here it is with them fixed (for example had named a molossian unit on the albania region, though when i checked in game this albania is on the steppe. Also had named a caucasian iberian unit to a hispanic unit, fixed it too). Also changed another thing, the hellenistic mercenary infantry you get is all thureophoroi i believe, when imported to FOG 2, so changed the name to Mistophoroi Thureophoroi from Mistophoroi Hoplitai (though if you made a change regarding that, do disregard my change here then). Plus fixed the Hayastan faction banner, having it be the same dark blue made the banner lose detail and go almost all black, so reverted it to the original but keeping the faction colour blue.

Another thing, do you think it is simple to change a faction culture? Id like Saba to be Semitic and not desertic, as in EB, but i imagine we'd have to change the region culture as well. As of now saba and most of those in arabia are with numidian named infantry with our changes.

by Bercor
Not at all! You just need to change some entries in the FACTIONS.CSV file. I've changed all Arabic factions from desertic to semitic and now they can only recruit the semitic troops. However, the starting armies are still using the numidian units, I'll have to mod the SETUP.CSV to change that. However, I can not find the file, despite being mentioned in the game modding guide... Very strange. Anyway, here's the file (and another Text.32

, as I've made changes to the Cartaginian Mercenaries names):

I haven't changed it the REGIONS.CSV yet though, so Arabia is still Desertic culture.

We probably should set up a dropbox or something so you wouldn't need to being constantly uploading files.

by Bercor
Ah nicely spotted! Next I’ll probably change the Boioi to the Celtic Culture (currently they are Germanic) and make the Triarii recruitable for Rome. Also need to change the Hellenic infantry image from an Hoplite to a Thureophoroi.

by Wulfburk
Ive managed to change all of arabia to semitic, including the rebel armies that are in them (and also 3 regions in lower egypt to nubian, instead of desertic).
However, Himjar, Saba, Adramitae and Homeritae i have not managed at all to change their pop culture and the culture of the rebel army (all in yemen). The text corresponding to the files in those regions i have changed but it seems they are not working for some reason. I attempted to change both the scenario REGION.csv , and the main one in data, but neither worked for these 4 regions...