The game that will "ruin friendships", ICBM allows up to 8 players to engage in total nuclear war. The winner shall be the one who lost the least.
Post Reply
1 post • Page 1 of 1

Aircraft technologies allow you to develop and produce advanced air units. You’ll be able to deploy these to conquer ICBM’s nuclear green sky.
In ICBM there are four kinds of air units:

Fighters: A fighter aircraft is a military fixed-wing aircraft primarily designed for air-to-air combat against other aircraft. Operating from carriers and airfields, their great speed and manoeuvrability make them perfect to establish air superiority over the battlefield. The trade off for this capability is that they are of limited use against surface targets. They carry heavy air-to-air armament and can also carry ALBM’s, if you have researched them.

Bombers: A strategic bomber is a long-range deep-striking aircraft designed to drop large amounts of air-to-ground weaponry onto distant targets for the purpose of debilitating the enemies capacity to wage war. They can carry the heaviest bombs and can only operate from airfields.

Attack bombers: An attack bomber is a tactical military aircraft that operates from a carrier. It has the primary role of carrying out airstrikes with greater precision than bombers can and it is robust enough to survive strong low-level air defences when on the offensive. This class of aircraft is designed mostly for naval air-to-surface missions. They can carry light nuclear weapons, but are much more difficult to intercept.

The first three types of aircraft can be produced and deployed at the beginning of a match and you can improve them by researching additional aircraft technologies.

You can research advanced aircraft to upgrade your aircraft to newer, more advanced models. In doing so, you will automatically increase the speed, manoeuvrability, durability and payload of all your planes.

You can additionally increase the capacity of your fuel tanks by researching aerial fueling once you have the advanced aircraft technology. This technology will greatly improve the range of all your planes.

If you want to establish air superiority in ICBM, having faster and more agile planes won’t be enough: you will also need to identify threats in advance, while going unnoticed at the same time. This is where AWACS and stealth aircraft can give you an additional edge.

AWACS can be researched and produced to secure better airspace surveillance: these "flying radars" are perfect for long-duration flights and can control airspace in a radius greater than 500 km. They are extremely vulnerable if they're attacked however and will need to be protected by SAMs or fighter aircraft.
By researching AWACS, you will unlock two new air units: AWACS aircraft, which operate from an airfield and the Carrier AEW&C helicopter, which operates from a carrier. AEW&C helicopters have a smaller range than normal AWACS and less powerful radars, but they’re equipped with sonar and depth charges for anti-submarine operations.

You can elude enemy surveillance and decrease the visibility of your aircraft by researching stealth aircraft, the ultimate air technology in ICBM. This improvement automatically applies to all your planes, which will become much more difficult to detect and shut down. 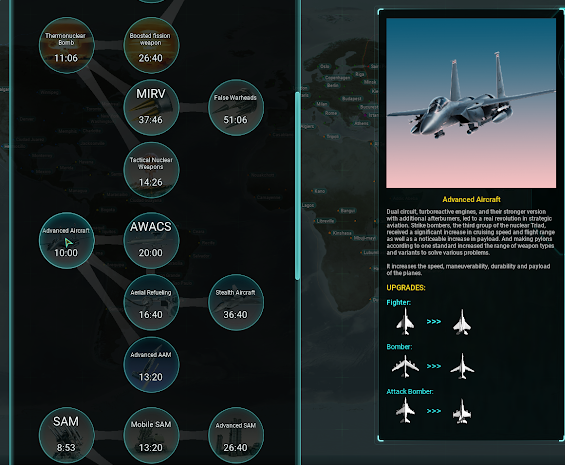 Initially, your air forces won’t be very efficient in attacking surface units - the only available conventional means of sea or ground attack are the free-falling bombs, so you often will want to use smaller nuclear bombs for important targets. But this changes when you research the Air-to-Surface Missiles.
You can then upgrade to Advanced ASM to further improve the efficiency of your bombers.

To have an edge in aerial combat, you could research the Advanced AAM - those make your fighters much more deadly in dogfights.

To fully reveal the advantages of AEW&C aircraft, invest into the radar technologies - LW radars if you just want to see the targets further away, and SW radars if you want to be able to supply the precise targeting information to your fighters and bombers, allowing them to engage the enemy from the maximal distance.

By selecting each airbase or carrier, you can decide whether to allow air patrol or not.

When you allow air patrol, you have two fighters always in skies looking for the potential threats. This usually helps to spot enemy aircraft on the far reach, giving more time to react.
However, sometimes you want to have the patrol disabled. For example, if you already have AEW&C in the skies near your carrier, then you already have good visibility of the airborne targets, so you can switch off the patrolling to stay hidden and not give your enemy the possibility to detect the presence of your carrier by spotting the patrolling aircraft. Another case when you may want to have the patrol disabled is when your airfield is close to the enemy territory. In this case, your patrol could occasionally fly into the enemy air space triggering the response. This can easily escalate to the full-blown conflict much sooner than you’d like.