Looking at our Steam Rating for the past months, we have been happily getting a rare 100% positive rating from our players. This is of course the biggest compliment a developer can get and also testament to the dedication of the team and the constant communication with players. We have been taking their suggestions and complaints and adapted and expanded our game together with our community, with a load of patches and improvements. The result: Very happy customers.

Taking the player’s feedback and wishes (and sometimes demands

) on board, has also informed our upcoming ONSLAUGHT DLC, which features a campaign based on the player selecting from different leaders and troop rosters for a branching campaign of procedurally generated maps, similar to what the original Fantasy General offered.

We are blessed with a base of players who have helped us greatly with both Fantasy General II as well the currently running Onslaught Beta. The huge amount of variation in a campaign like Onslaught’s one is something that is impossible for a small team to properly test and balance on their own. There are endless permutations of possible ways it can go – too easy for this particular set-up of army, leader and selected path, too hard for another combination. Without our dedicated beta players, we would never have enough information and playtime to get it balanced properly.

For example, the ultimate mission for the campaign (Spoiler!) at first looked like this: 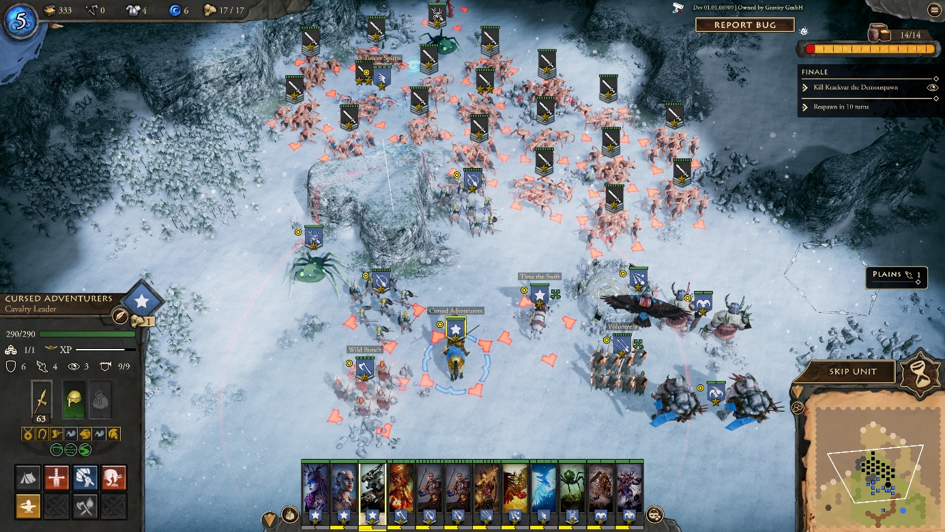 Notice how the blue player army (This one featuring Ailsa the Shaman and her mixed army of beasts and Barbarians) seems a little outnumbered?

Well this is what that game looks like after a few turns: 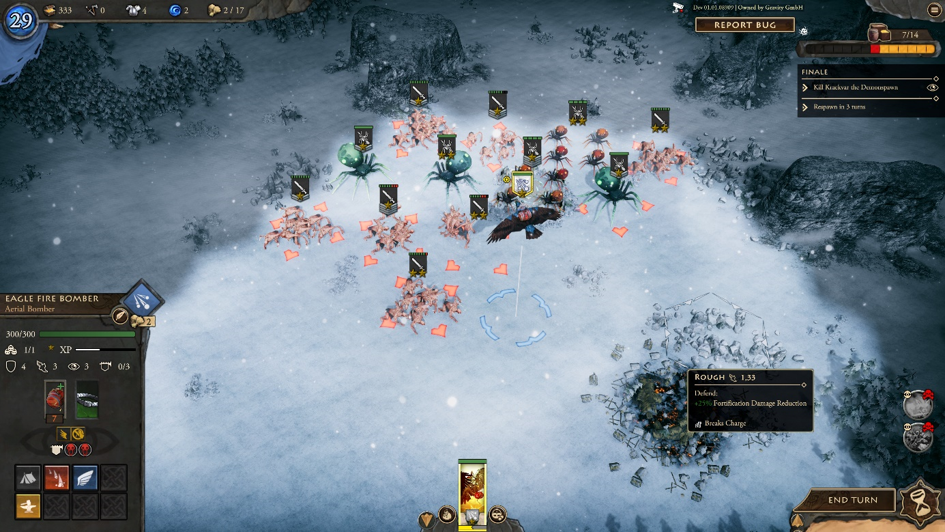 Obviously not the best result. But the reason is actually not only the horde of demonic enemies completely obliterating my meagre forces but a profound lack of defensive and missile troops that have to do with how Ailsa’s roster works. So balancing here is not only quantitative but has to do a lot with possible tactics derived from troop composition. Something only a real playthrough will give you.

Our goal in building the Onslaught Campaign mode was to create a succession of maps that would allow you a lot of replays and never feel repetitive, yet have your experience be useful still. One that offers enough branching decisions to open up plenty of new routes, yet not feel random, but rather tailored to what your preferences and needs in your particular playthrough are at the moment.

We did this by creating a set of “themes” and “areas” that the procedural generator then uses to build the maps, so there is framework of design priorities that will give a distinct flavor to each map, yet make it different enough in each iteration. Together with reward choices that are previewed, so the player knows what type of reward he can expect from a mission (like a unit, hero or artifact, but not which one exactly) and base his path on that, the campaign will have huge replay value – especially if you play it in our Iron Maiden mode, that – similar to Rogue-Likes- will only ever allow you one save, so there is no taking back any decision you make, testing your true mettle as a general.

With the help of our players, we hopefully will be able to create another experience that will make our customers 100% happy. And if not? Well, we will certainly try improving it until it does.
Top
Post Reply
1 post • Page 1 of 1