I have started a new Blitzkrieg campaign, following the release (and accompanying patch) of Panzerkrieg.

Got to the Norway scenario, which specifies as a secondary objective not to deploy tanks, so as to have more CPs for the upcoming campaign in France. I did not deploy any tanks (and just to be on the safe side did not use the tanks the Central Command provided at some point -frankly, they come in far too late to make a difference anyway, but once I completed the main objectives and secured a victory in Norway, the secondary objective pertaining to the use of tanks remained pending (marked with the questionmark). 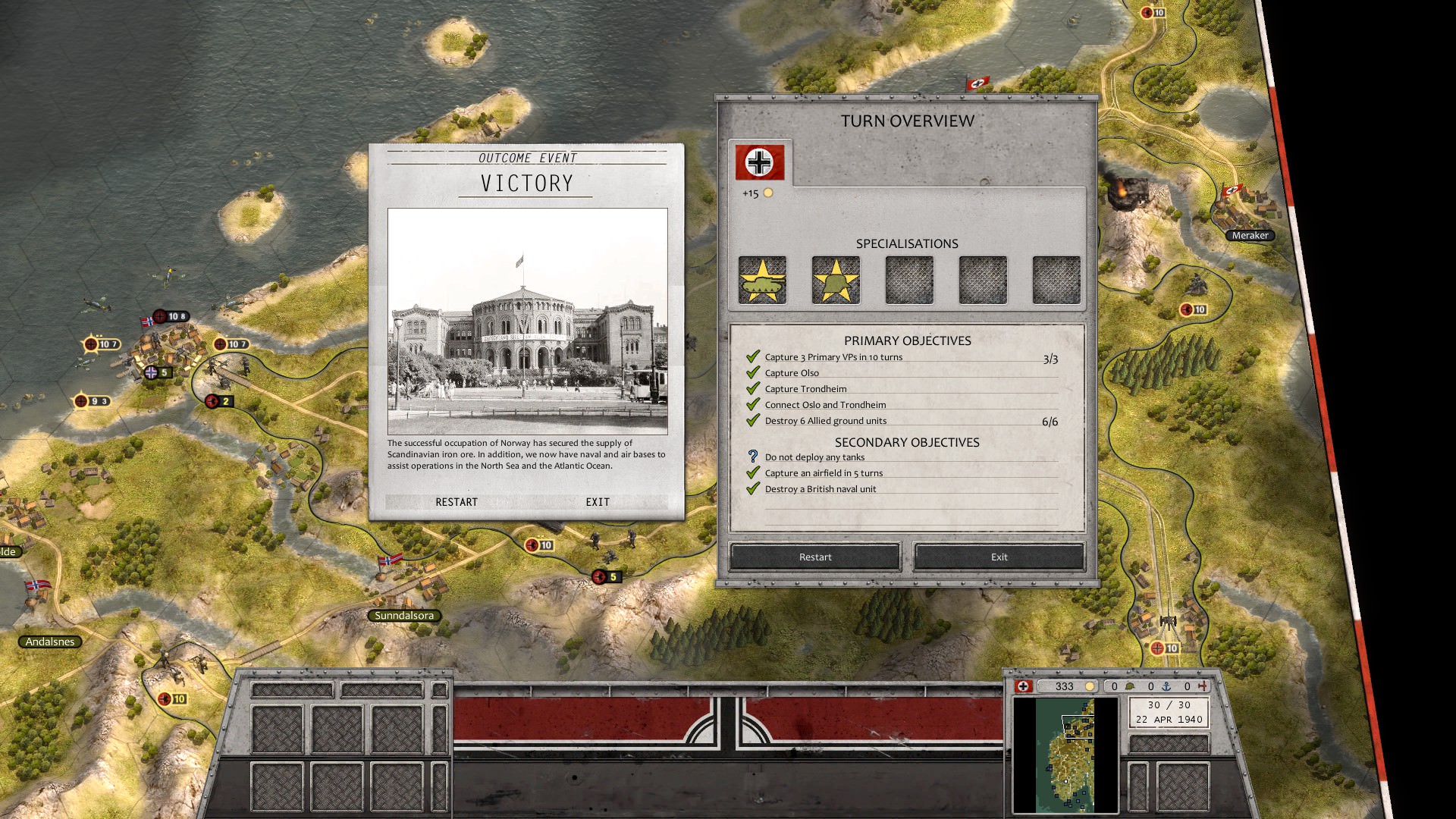 A minor glitch, but thought I should report it. Also, post-patch, some event photographs do not trigger properly, but I'll have to go back to check which.

edit: apologies, posted this in the wrong section.
Top

Please post those event photograph glitches, if you find them. (Best with screenshots...)
Also, if the trigger does not turn green it does not necessarily mean it is not working properly. (One of the devs told me.)
But still good find.
Top

That's because they've got the win trigger linked to the wrong objective, which is a serious flaw in that scenario because it means you cannot achieve a Major Victory. I don't know if that has any ramifications for how one does in succeeding scenarios.

I would move this thread to Tech Support now but it's just going to get lost in the current 64-bit OOB/Panzerkrieg stuff. I have bookmarked it and I will move and bump it at a later date. Thanks for reporting this, Huygens.
- Bru
Top

Thanks for reporting, we'll fix that with the next patch
Top

I wonder if it has been fixed in 5.2.2? It is not in the patch notes... I'm really eager to start playing Blitzkrieg, but i'm waiting for this bug to be fixed...

Hello everyone. First time posting or responding here.
Seems as of today it is still bugged. I am NOT happy about it and is there a way to fix it on my end ?

) a bugg like this ought to been fixed asap.
"They couldn't hit an elephant at this distance."
Top

There are no minor or major victories in the Blizkrieg campaign. Further details about this "buggy" secondary object can be read in the other topic about this:
http://www.slitherine.com/forum/viewtop ... 56#p700756
The open-state of the secondary mission object about tank deployment can be neglected as it is purely cosmetic. Yes, it's a little issue and all shame and blame to the devs for not fixing this since months.

Anyway, if you get 45 land command points in Belgium plus possibly 2 from War Economy, you are all fine. You won’t get more CPs there, only less with tank deployment in Norway. See the topic above.
Top

This is still not fixed. I played just now, not using any tanks, only 1 artillery, and didn't get the secondary objective.
Top

I can confirm this as well, but my biggest beef is still the Cavalry who have dropped their rifles.
Top
Post Reply
10 posts • Page 1 of 1