So after a years campaigning at the MAWS club, we reach the final of the Medieval tournament. It was Medieval Scandinavian v Later Low Countries. The armies themselves were fairly straightforward:

However, due to a handicap system, the Later Low Countries had 850 pts to play with and the Swedes 800.

The Low countries (hereafter referred to as Dutch) won the initiative and went for Agricultural. Terrain finished fairly favourable for the Swedes with some large lumps of Broken Ground on the Low Country side. Deployment looked like this: 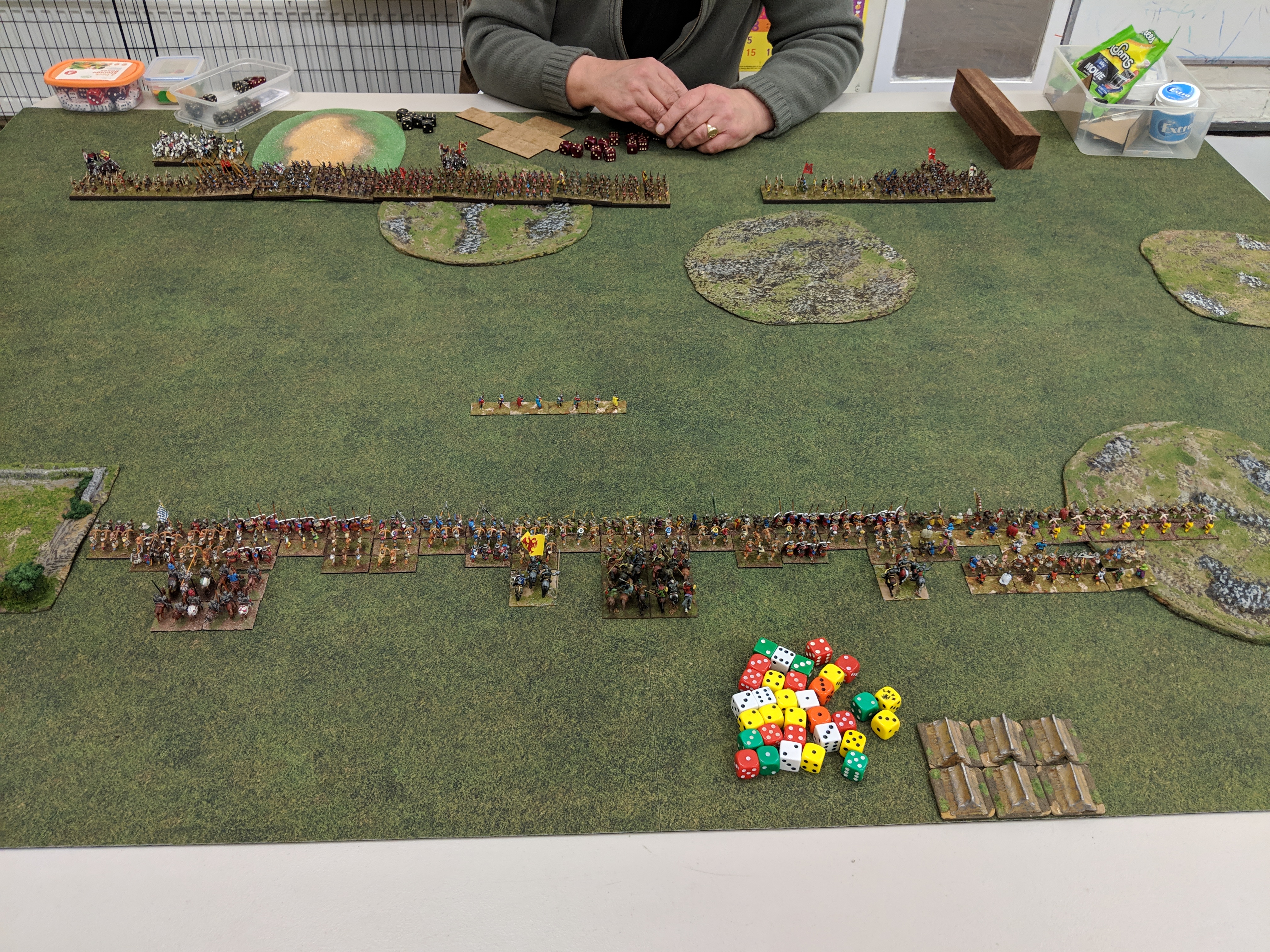 Largely a big long line, with the Swedish Poor on the right hand side.

So, the Swedes having worked out that on the left wing there was more of the Dutch and they were better decided to swing to the right to pick on the Longbowmen and two isolated pike blocks. This would involve the poor troops having to get involved. But they had a general and would get rear support so I'm sure nothing could possibly go wrong... 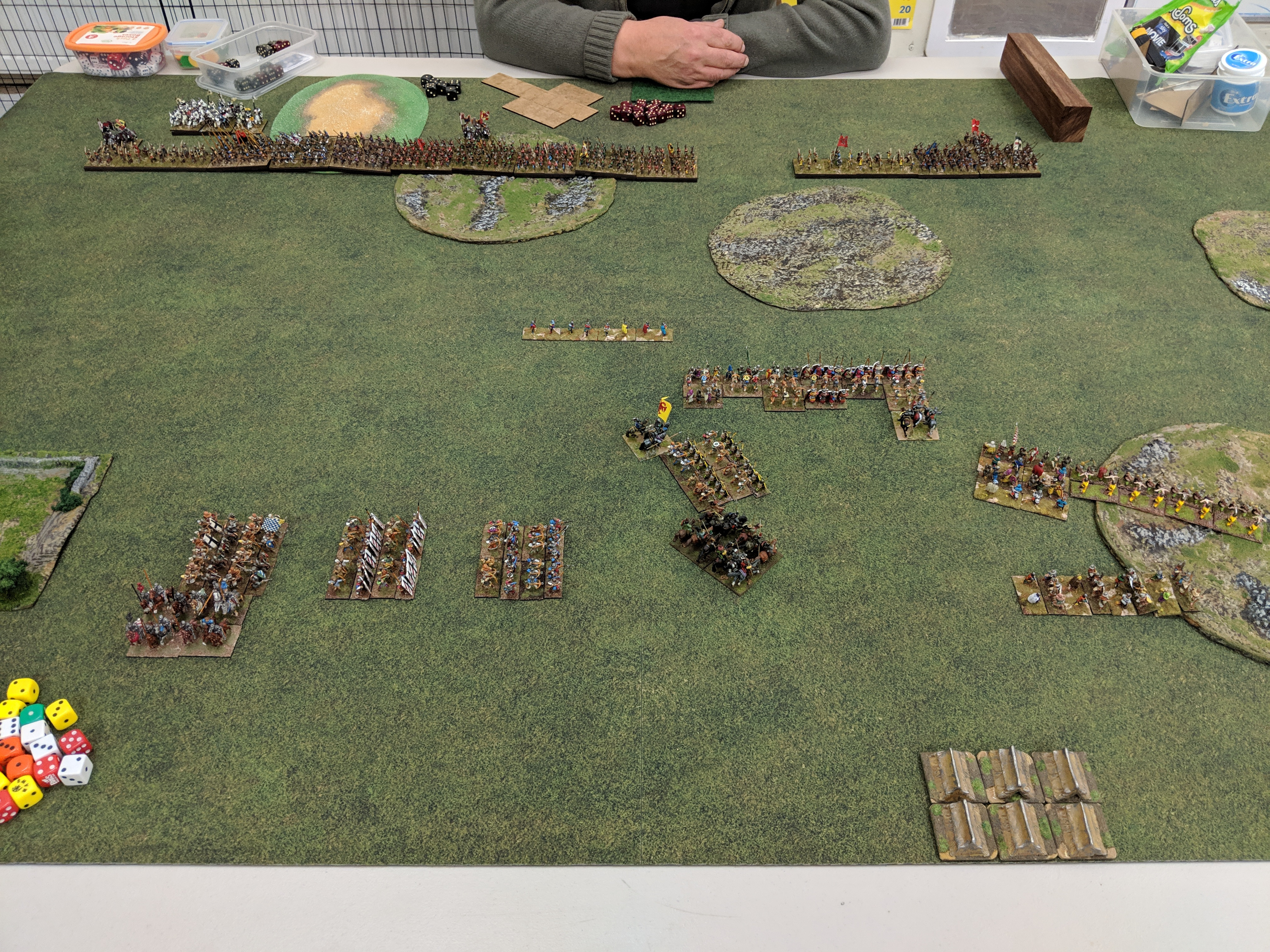 My opponent was not feeling so well and needed a lie down. Or perhaps it was because I was playing so slowly? Anyway:

When my opponent woke up we'd both forgotten whatever misguided plans we had made and carried on. I was still aiming for the Dutch left wing, but there was a gap appearing in the centre of the Dutch line. 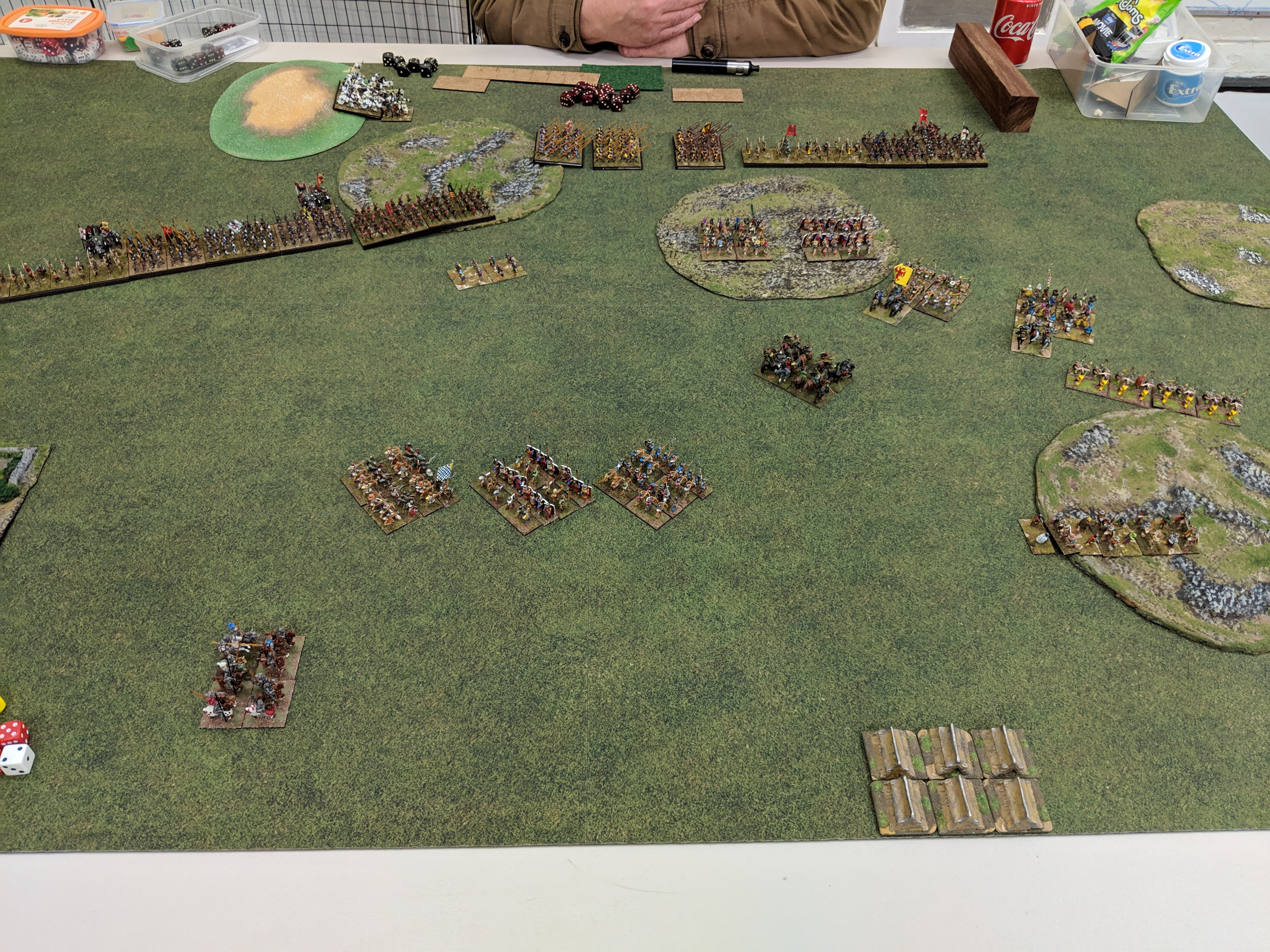 The Swedish LF were gamely holding up thousands of pikemen 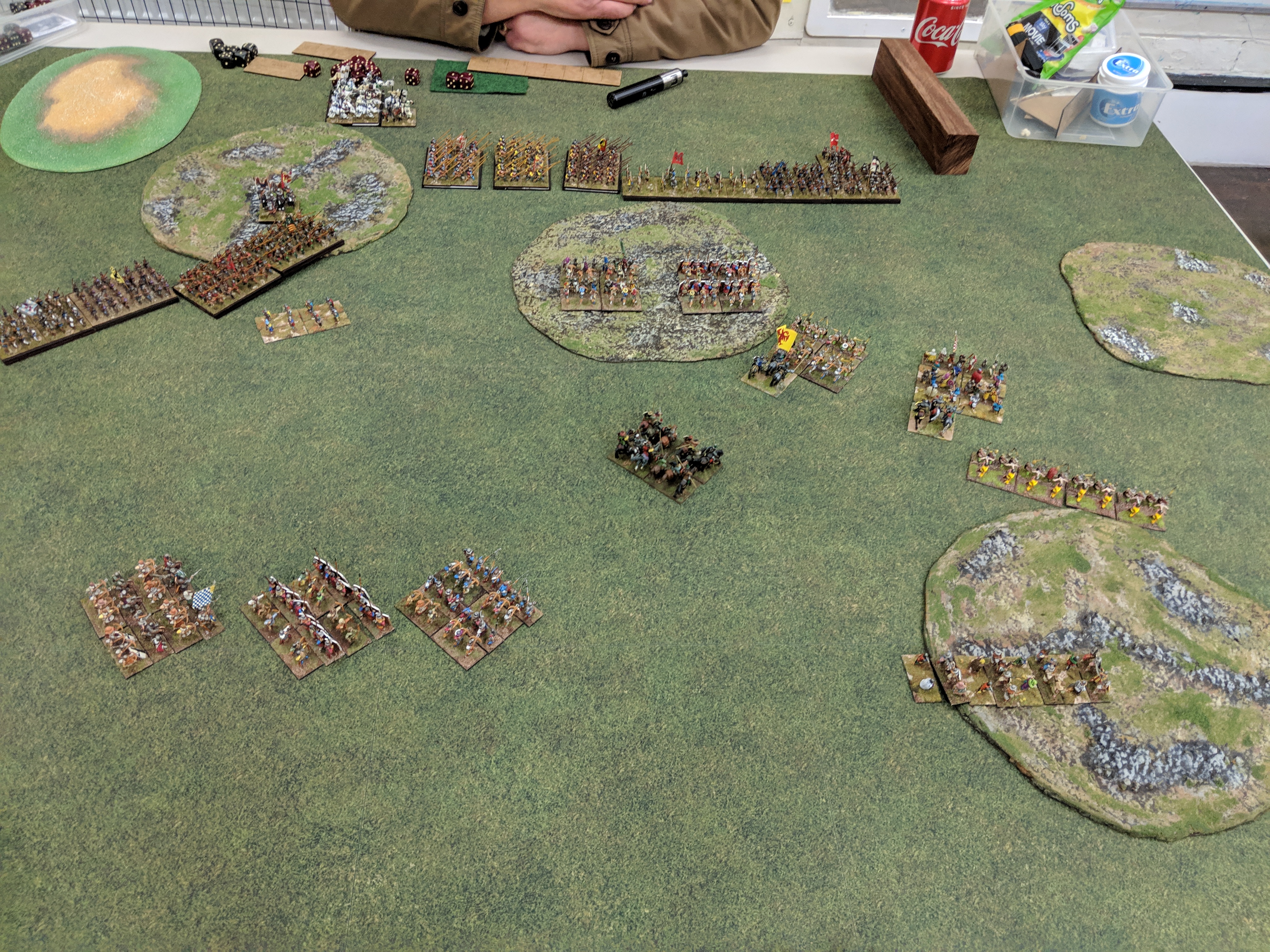 The Swedes dressed their lines in readiness for the charge! 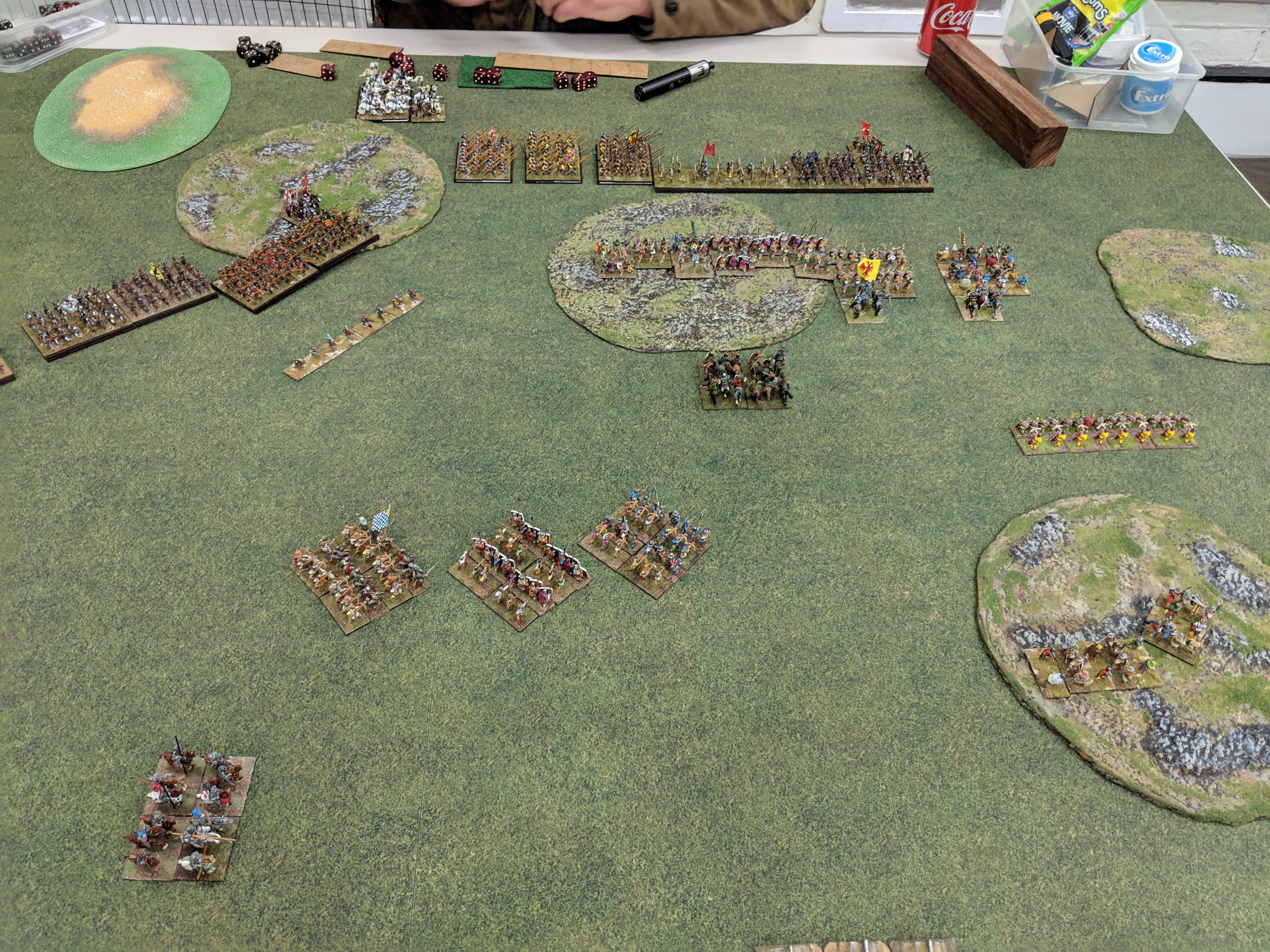 Almost there! On the left the Dutch were trying to advance towards the exposed flank, but were still getting held up by those pesky light foot. The unit facing the Longbowmen got shot and annoyingly a base was removed. 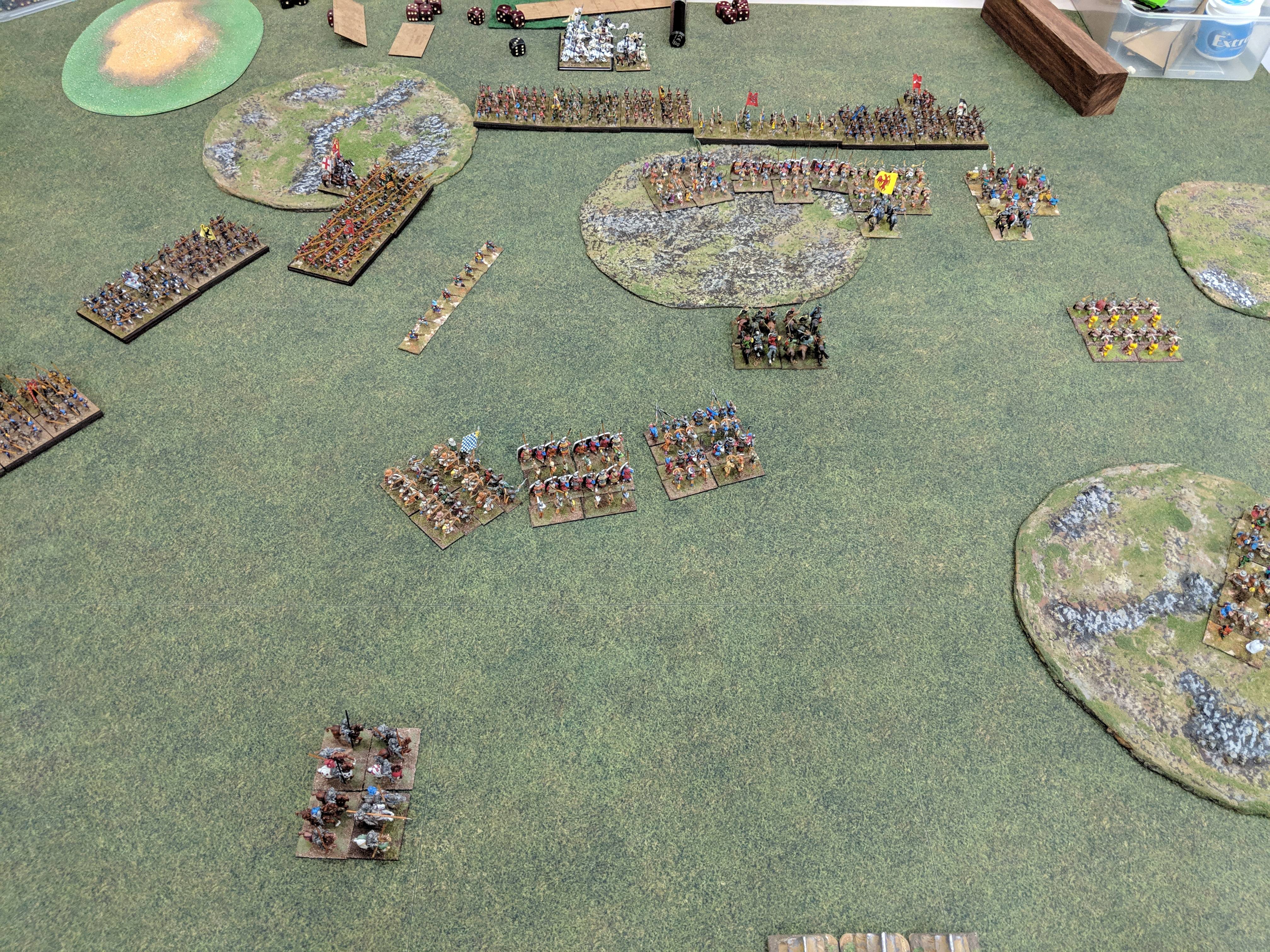 And Action! It was a stunning impact, with only one hit from each side. The Poor troops drawing 0-0 with the pikemen! 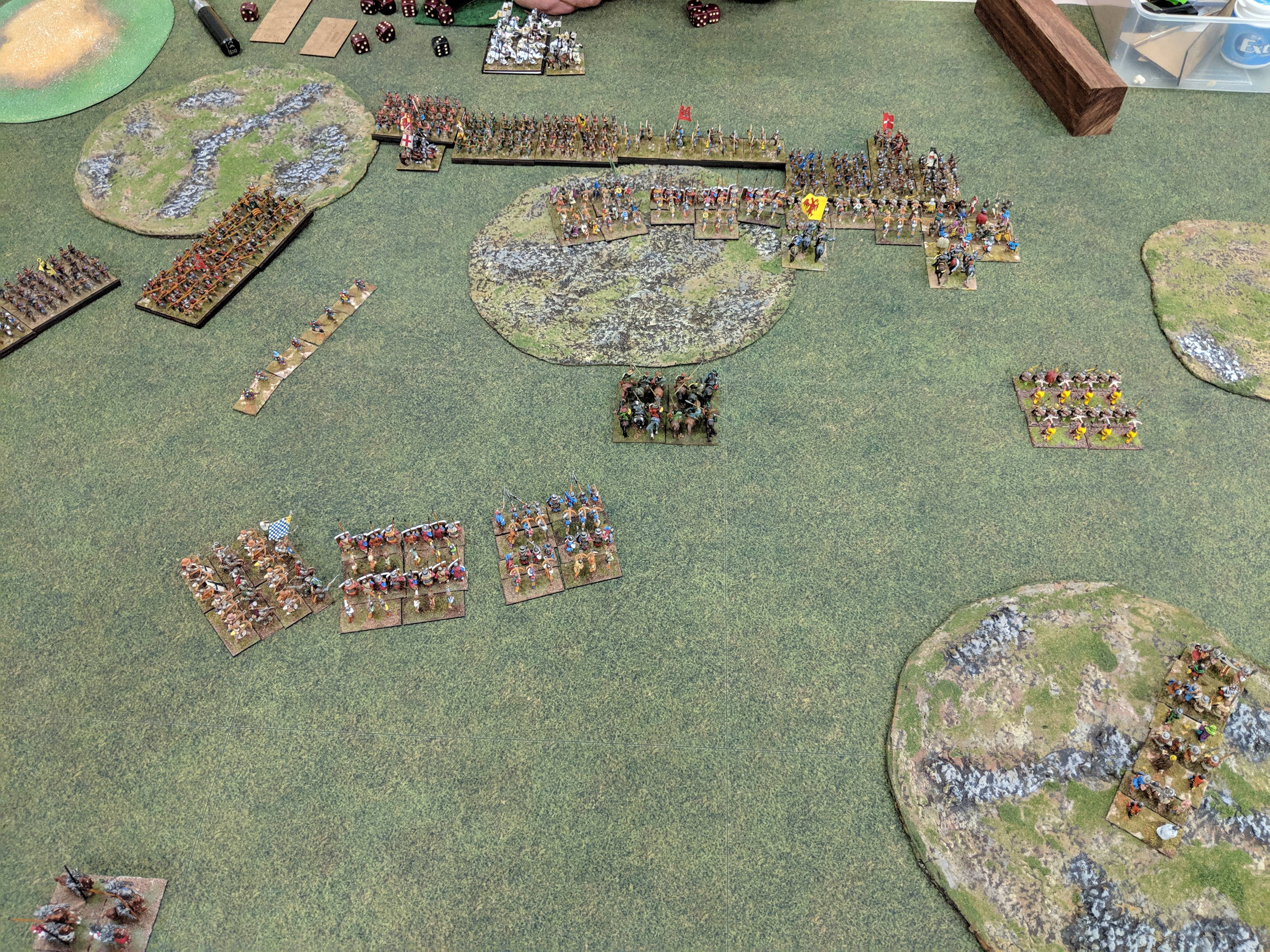 The battlegroup charges the longbow and wins the impact 4-3. The net result was that both sides lost a base! The Swedish left wing (now in the centre) sorts itself out to make something vaguely resembling a line. 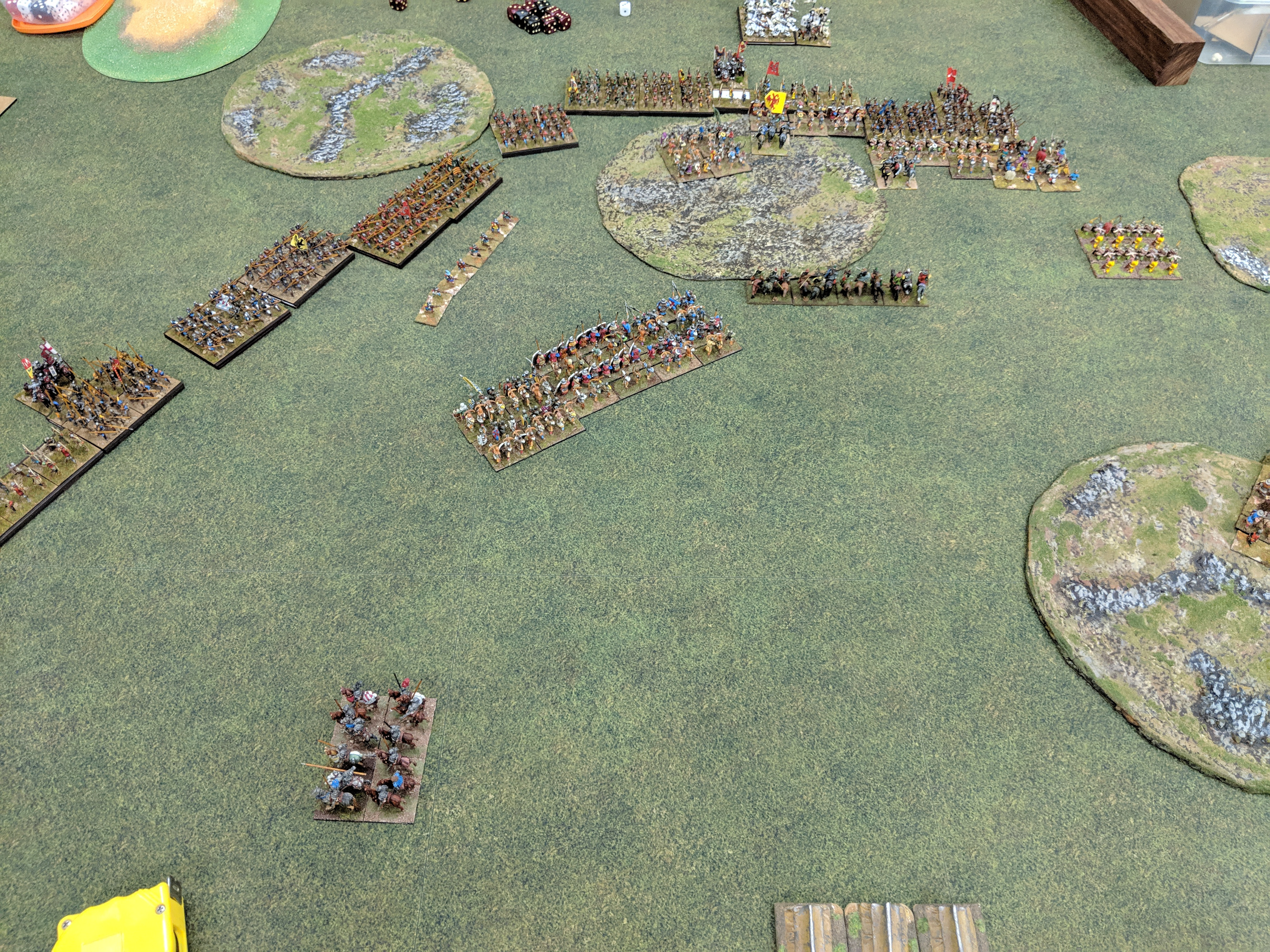 Despite getting loads of hits, my opponent simply got more. The damned longbowmen taking another base of the unit facing them despite me having equal dice at a plus with no re-rolls! The poor troops on the right were suffering, dropping to disrupted. 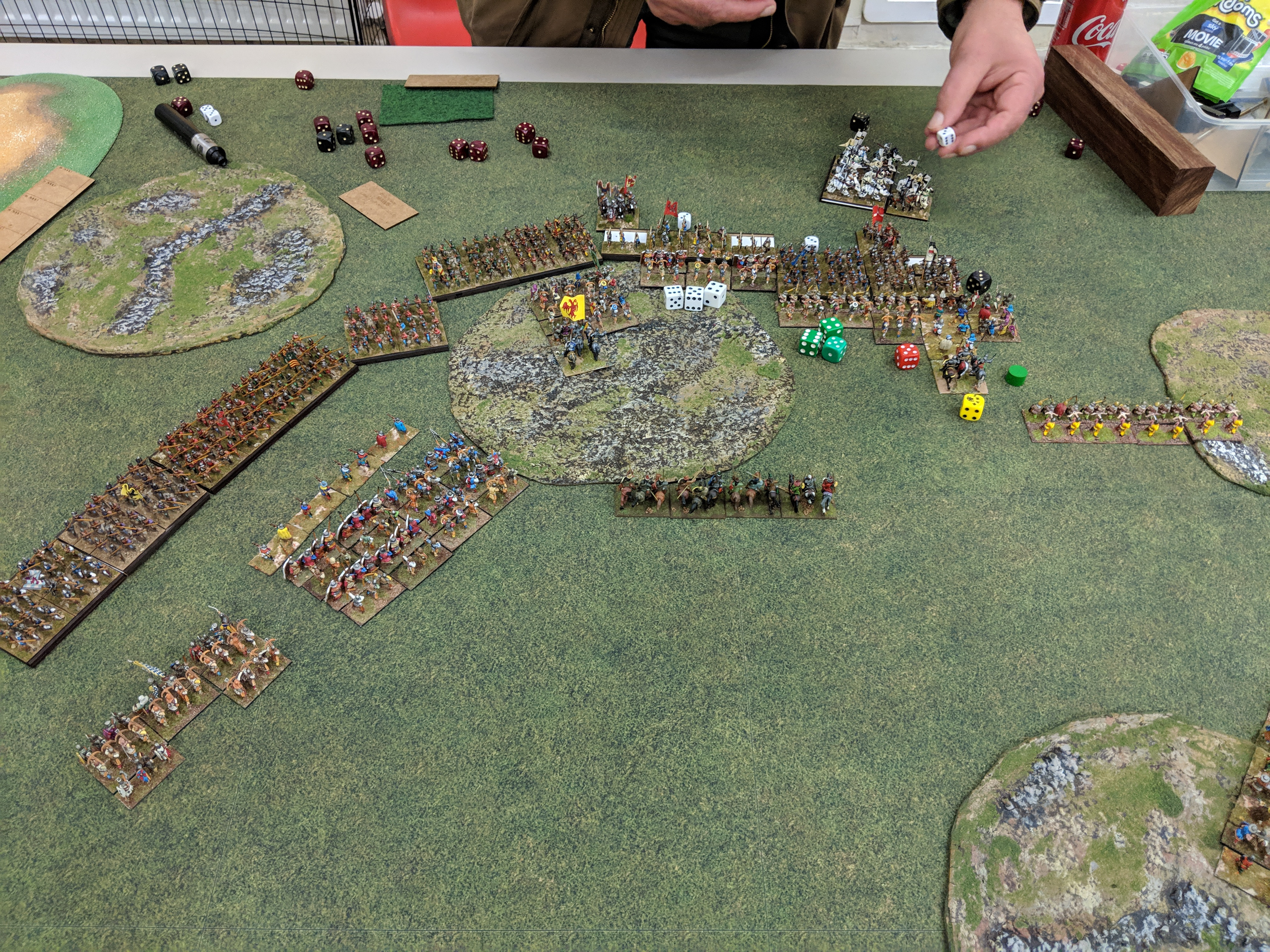 I managed to bolster the poor troops. On the left I managed to isolate a battle group of pikes - so charge, I dropped to disrupted. 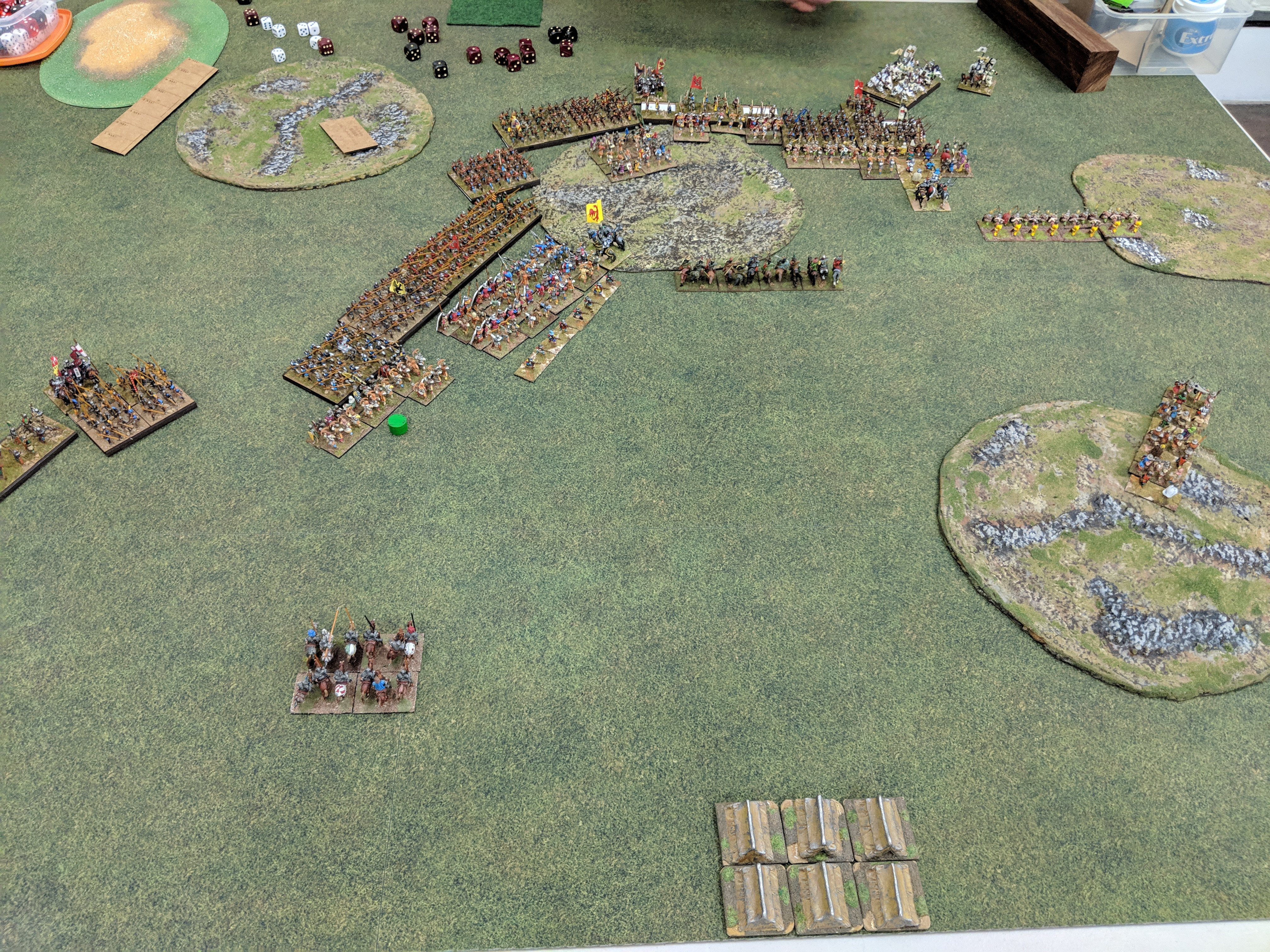 But that meant I could move into the overlap and get that battlegroup double overlapped. It didn't help, and both units dropped to fragmented. 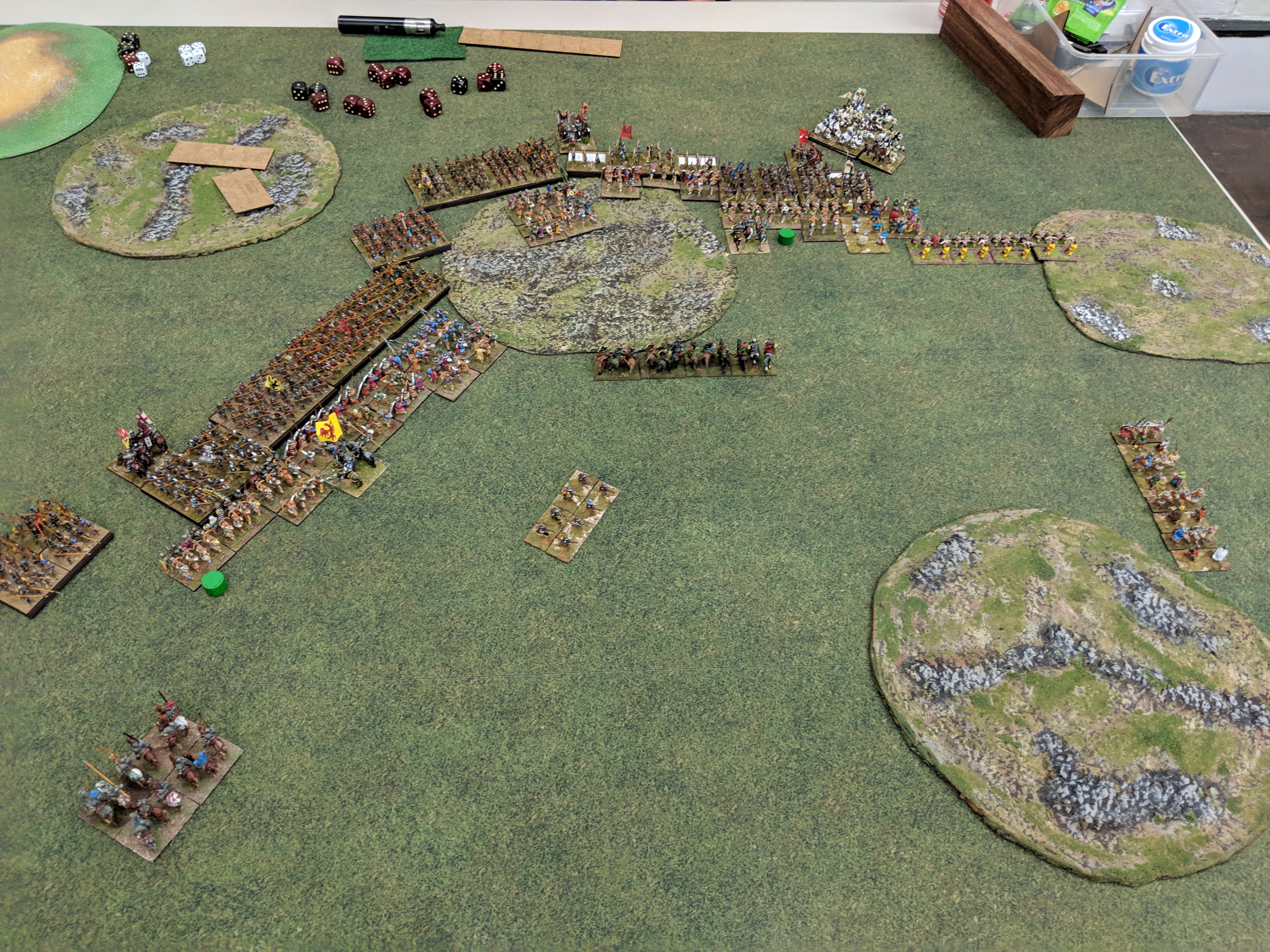 My opponent decided not to charge the fragmented troops with his pikemen and had the unit of pikes support the unit of Average Bowmen. I think this was a critical decision in the game.

At this point, we had been playing for around two hours and no Dutch battlegroup had even dropped to disrupted. There were large chunks knocked out of most of the Swedish battlegroups and several were disrupted or fragmented. It was not looking good.

I then, however, played my trump card. A chap called Bob came over to watch and suddenly things changed!

My knights charged both the pike unit and the bowmen and beat them both at impact. The bowmen dropping to fragmented and the pikemen disrupting. In the middle pikemen battlegroups were dropping to disrupted and losing bases. On the right even the poor battlegroup was winning and the Longbowmen were down to five bases. Things were about to get a bit grim for the Swedish unit in the broken ground however... 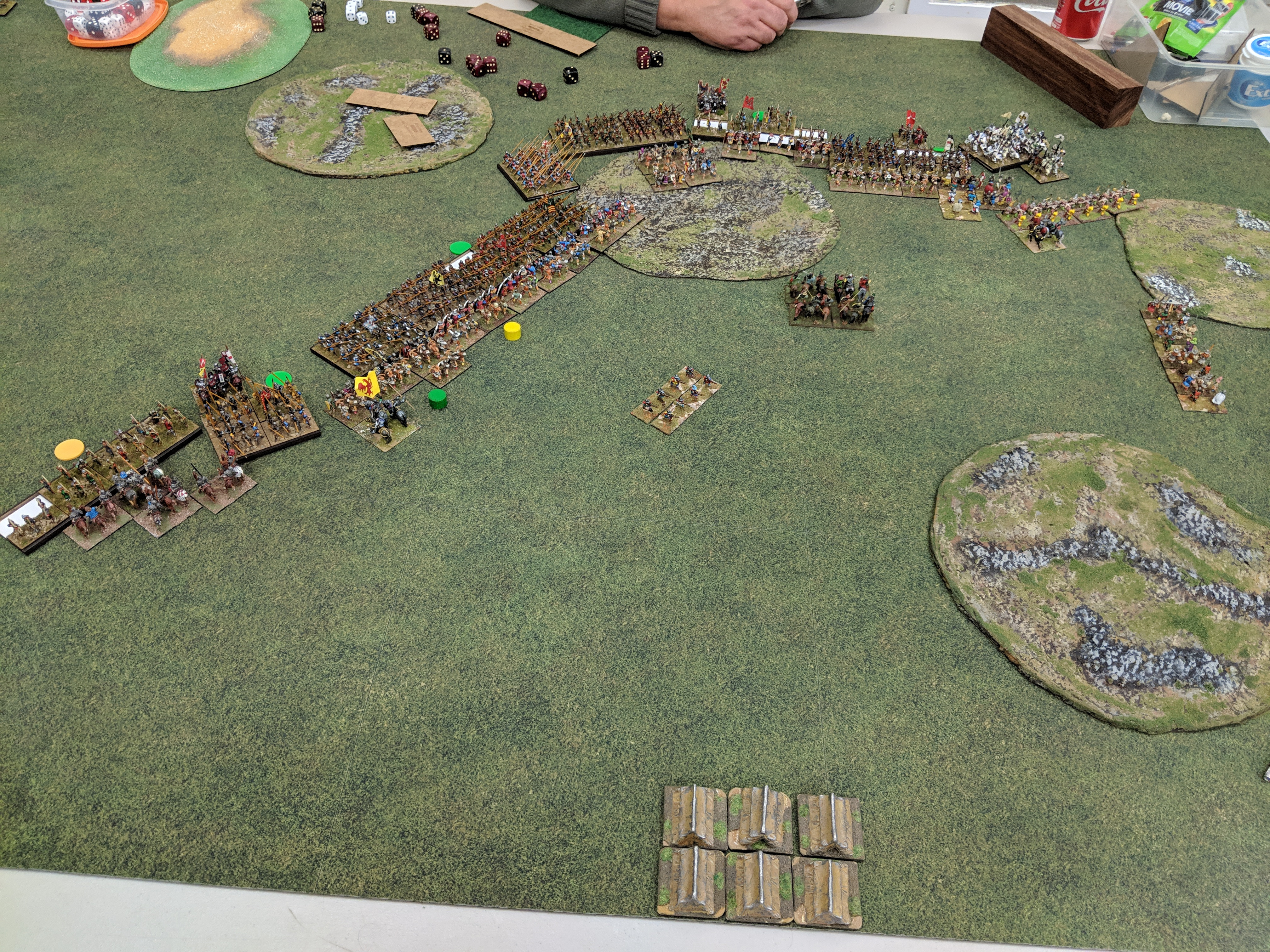 And a couple of turns later it was all over. The Knights smashed the bowmen and pike unit facing it and promptly charged the other unit in the flank. The Swedish right mysteriously crumbled despite having more dice and being at an advantage (This was likely due to Bob who had by now gone home). 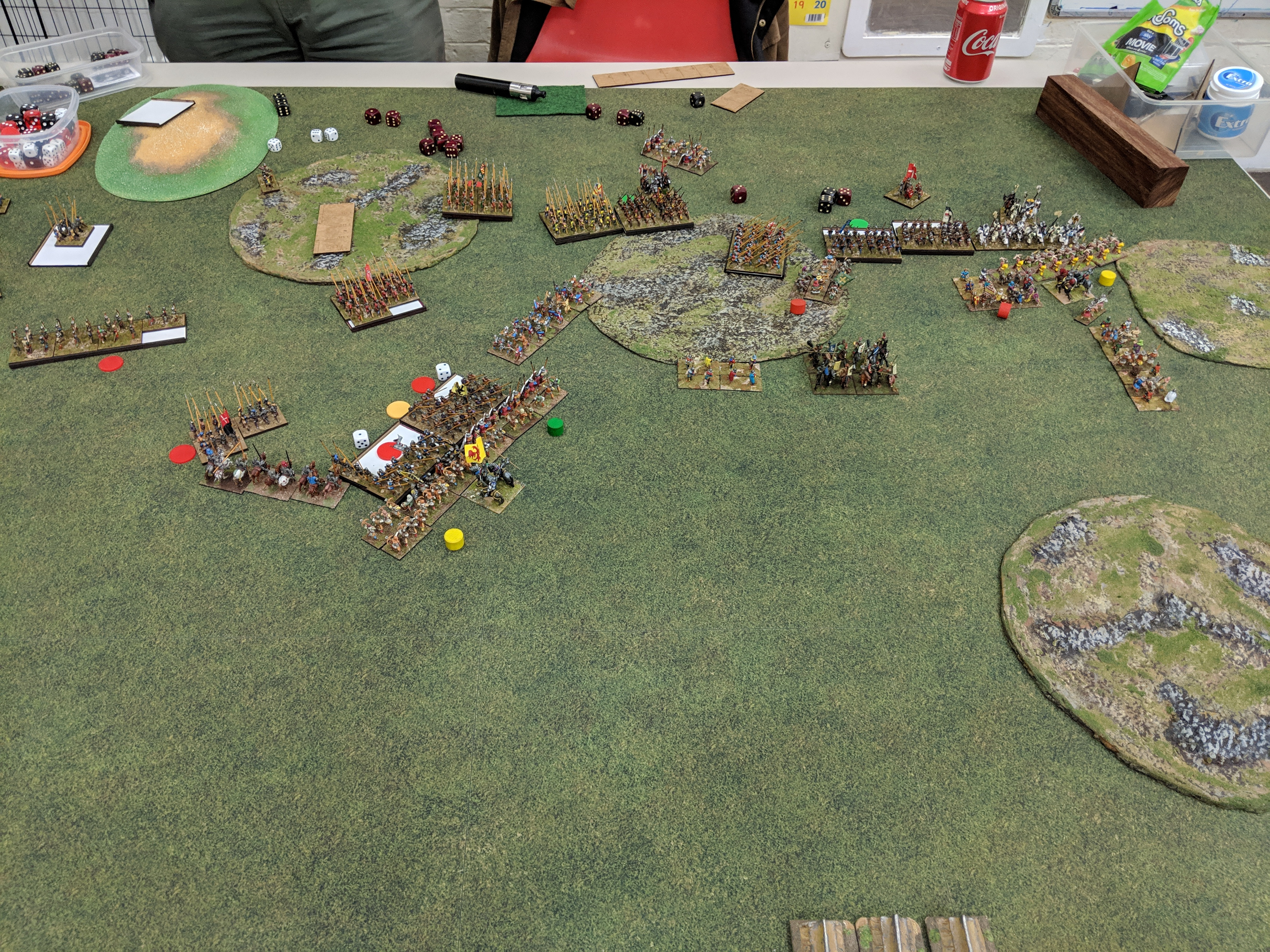 Finished with the Swedes having lost 8/12 and the Dutch having broken. 28-14 in game terms.

Cracking game, with a real swing in the middle.
Evaluator of Supremacy
Top

Thanks for the AAR. It does look like it was a cracking game.
Top

You're right about not charging the Swedes on my extreme right being the crucial moment (a big mistake!). It should have saved me a couple of units and lost you at least one, and that might have turned the game round. Lesson hopefully learned!

Incidentally, you defined the poor troops as light spear/sword, so I should have been at +2 throughput the melee stages. And you were shooting 3 dice against my knights - with 4 light foot!

Nonetheless, and as you say, a cracking game.

PS: Glad you decided to leave out the pic of me semi-conscious on the floor. Not the prettiest of sights!!!

ChrisTofalos wrote: ↑
Fri Mar 01, 2019 12:59 pm
You're right about not charging the Swedes on my extreme right being the crucial moment (a big mistake!). It should have saved me a couple of units and lost you at least one, and that might have turned the game round. Lesson hopefully learned!

Incidentally, you defined the poor troops as light spear/sword, so I should have been at +2 throughput the melee stages. And you were shooting 3 dice against my knights - with 4 light foot!

I forgot about the Light Foot! Although since they never managed a hit it is a moot point

I was at double minus with the poor until you lost a base, which got it back to a minus - when you disrupted I was counting as evens when I should have been at a minus. Sorry for that.
Evaluator of Supremacy
Top

No problem. Even breaking the poor troops earlier and crashing into the other poor ones to them wouldn't have helped. The crucial mistake was not charging your fragmented foot on the right. It cost me at least three units and, ultimately, the game. Oh woe is me!

It was a pleasant surprise when you tested not to charge

Why do you only post the games you win?
Top

I only post the games I take photos of!
Evaluator of Supremacy
Top
Post Reply
8 posts • Page 1 of 1