And so onto the final game vs Paul Bartlett of Plymouth – top ranked player using Later Plantagenet English (Continental). Paul had an IC, 2 x TC, 8 x 6 MF LB, all undrilled, 5 x 4 HF polearm of which I think 3 were superior and 2 HvA, 1 x 6 Poor Cav which would dismount as Avg MF and 1 x 8 Poor Def Sp. Another big army with 15 BGs. I thought the HF in 4’s were potentially vulnerable and LB in 6 still have to test with 2 shooting hits – not that I have a lot of firepower in my army. Paul also had some FF.

I was ahead on initiative but was out rolled and Paul chose Hilly – not a good start. I chose a small piece of brush and 2 woods to try and break up the shooting to come. The terrain was quite favourable for Paul and I toyed with the idea of a Flank March but decided the cavalry were required for rear support. 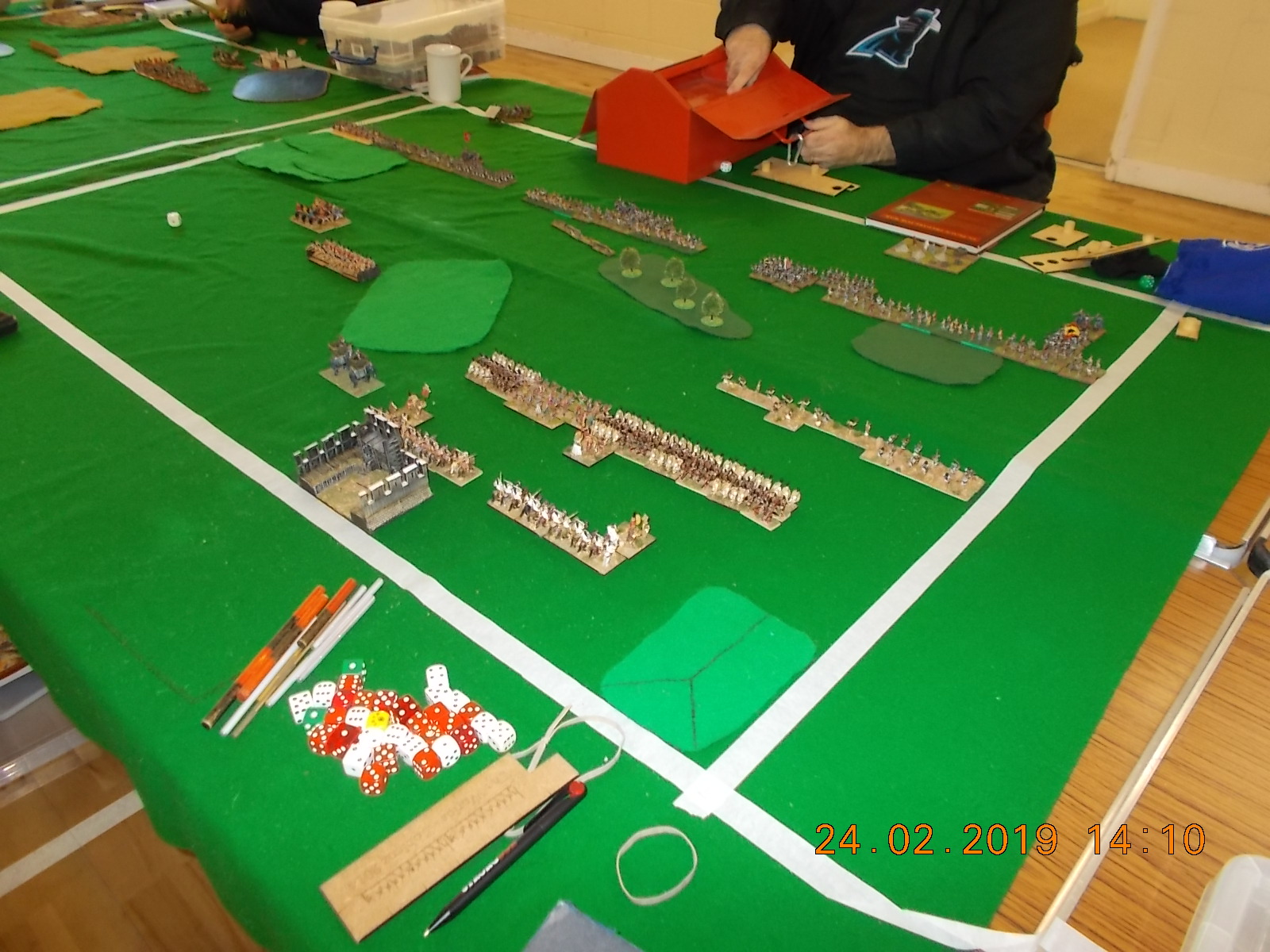 Sensibly I should have split my army and waited for Paul to attack. I am 14 points ahead going into the final game. So what was I thinking of trying to attack a English LB army in terrain? Now I know how the French must’ve felt at Agincourt – sheer muppetry!

As it was my attack was both poorly conceived and poorly executed. My right wing should have been Legion / Thracians to attack through the terrain / Legion. But I was concerned about the LB firepower and the Thracians dropping due to the proximity of the table edge so I put them through the Wood instead – stupid. 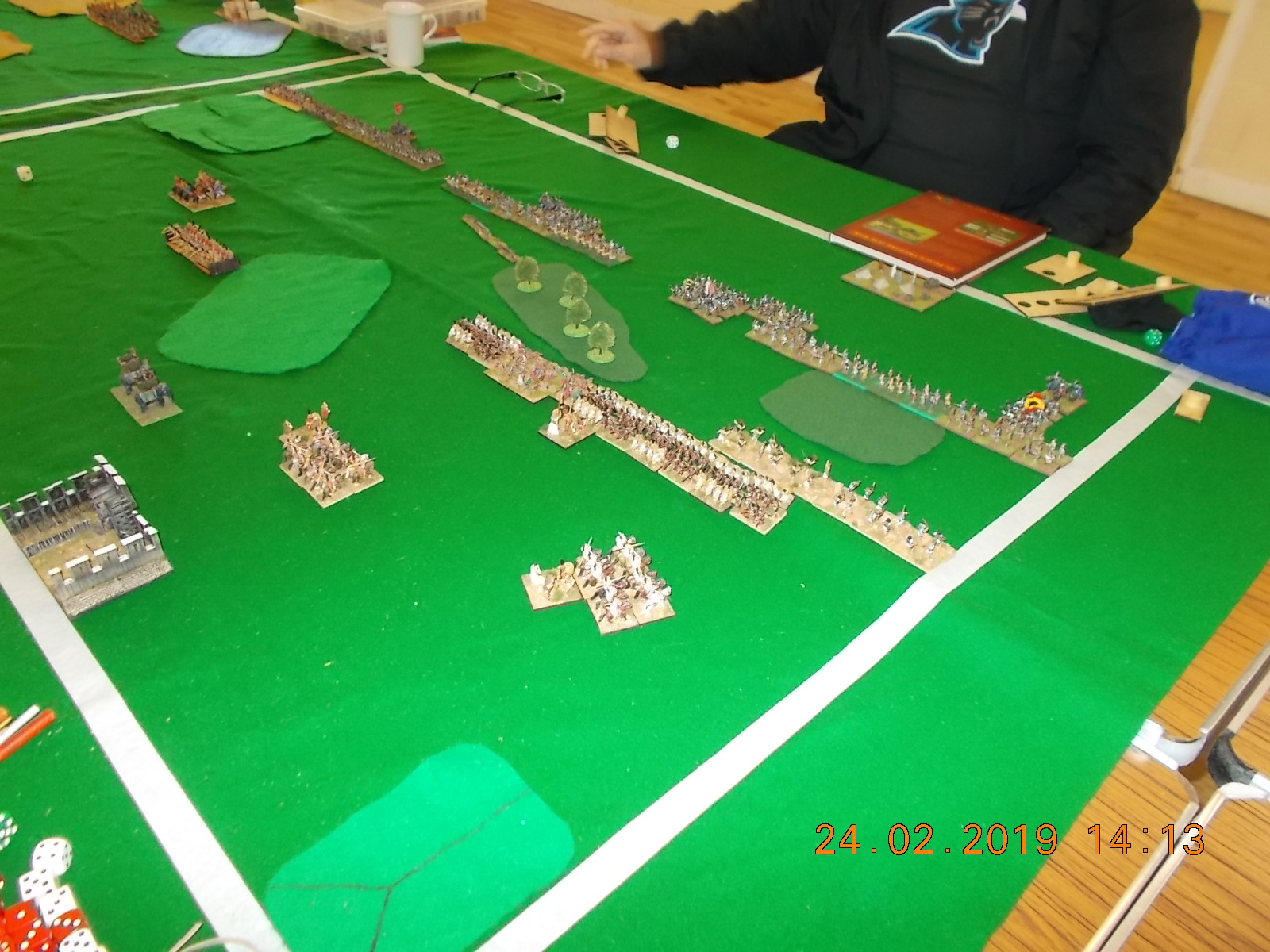 So the Legions slogged through the terrain and eventually charged into a HF BG and stepped forward into a LB BG. Impact was drawn and thereafter I was doomed to be overwhelmed by number of dice. The Thracians eventually arrived but the attack was delivered piecemeal allowing Paul to optimise his generals.

By pushing forward so strongly on the right I had little to hold up the left and soon a wall of LB were shooting up the Poor Legion cowering behind their FF. 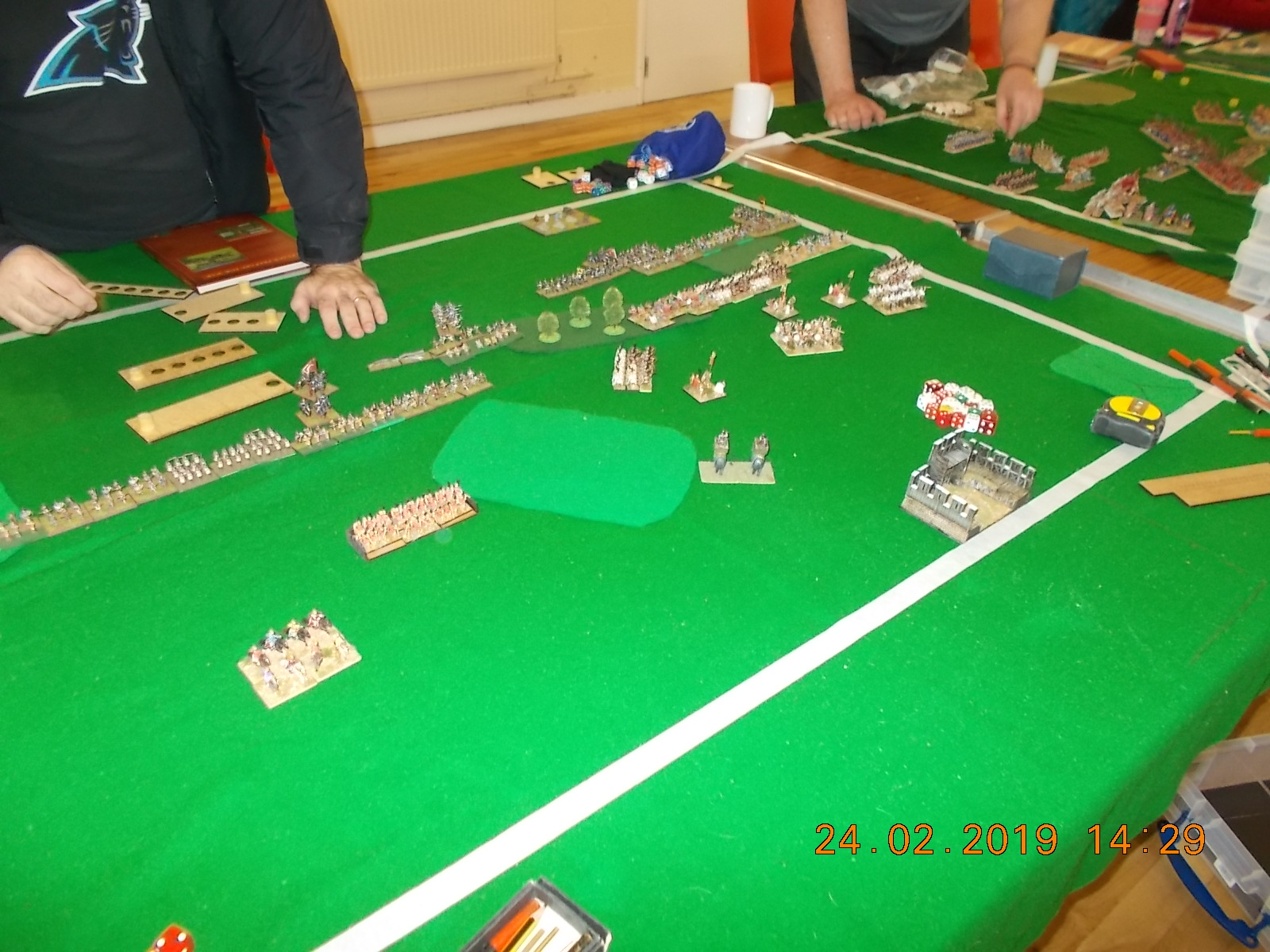 I had a glimmer of hope when a LB BG dropped to Fragged but I was unable to capitalise on this. The pressure on the right told and I lost the Thracians and a Legion. My LF Slingers had also lost 2 bases to shooting screening the advance and were also fragged. This photo shows a Legion gamely fighting on before it is charged in flank. So 7 AP down to Nil with a break point of 11 and things were not looking good. 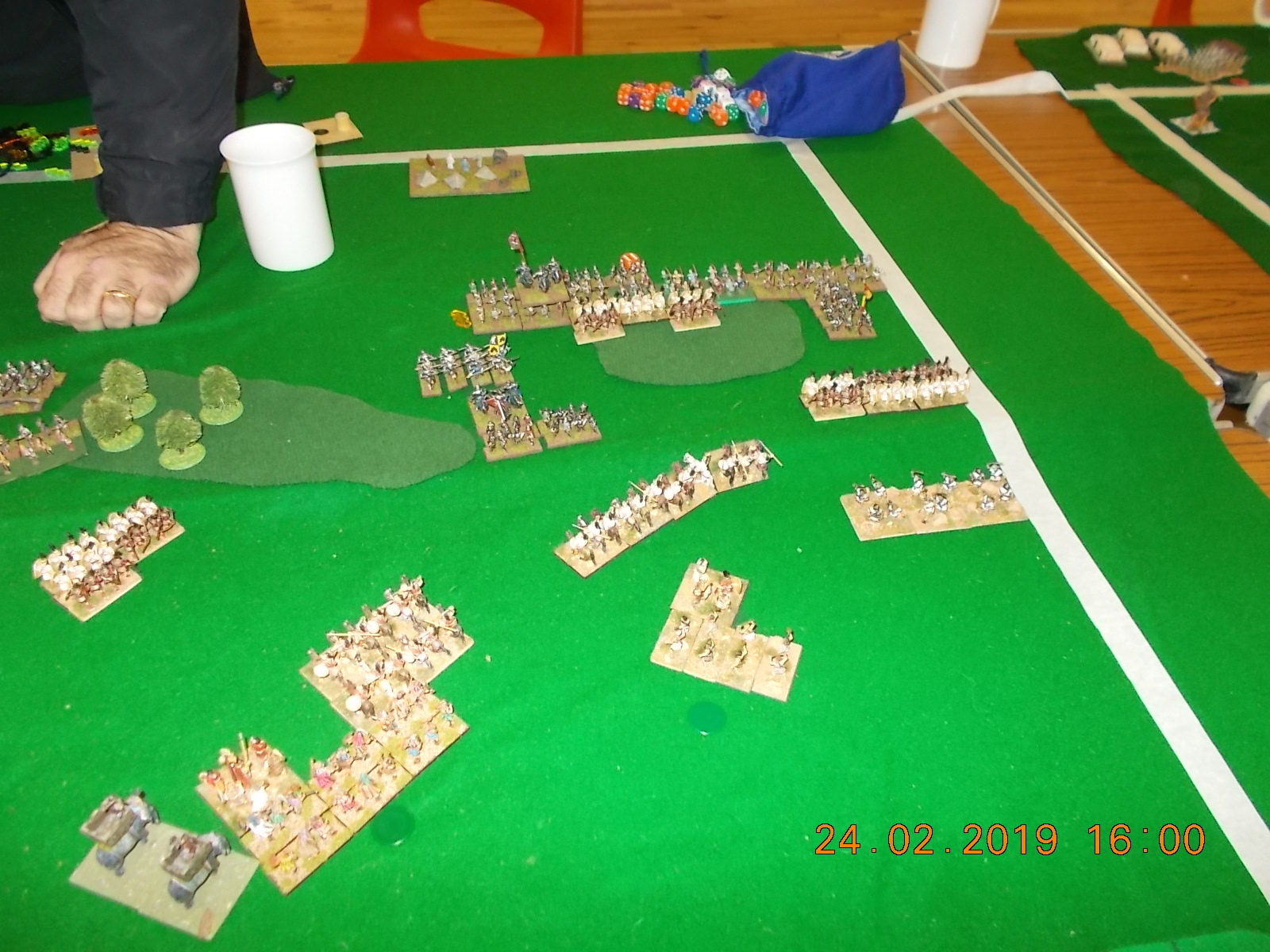 Fortunately my IC managed to rally the Thracians and also the LF.

On the extreme right the final Legion went into a Super HvA Polearm BG cunningly deployed in column in minimise the impact. In a rare bit of luck the Legion delivered 3 hits to 1 and with no general or rear support the HvA HF dropped to fragged – then routed in the melee. The victorious Legion now had a MF BG in its sights and in the open and that went down fairly quickly too. 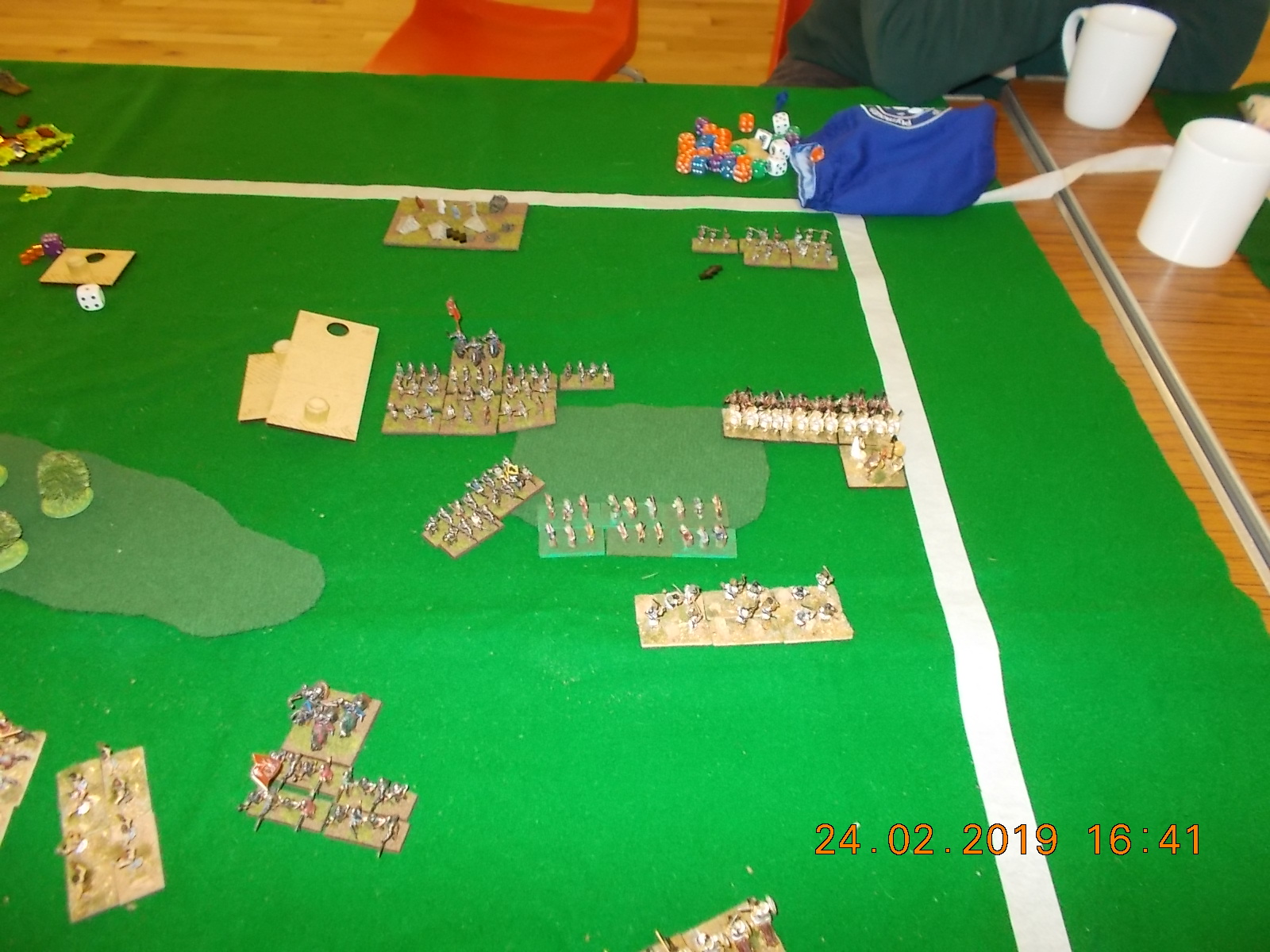 The pressure on the Poor Legion proved too much and they eventually broke leaving the LH in a rather precarious position. 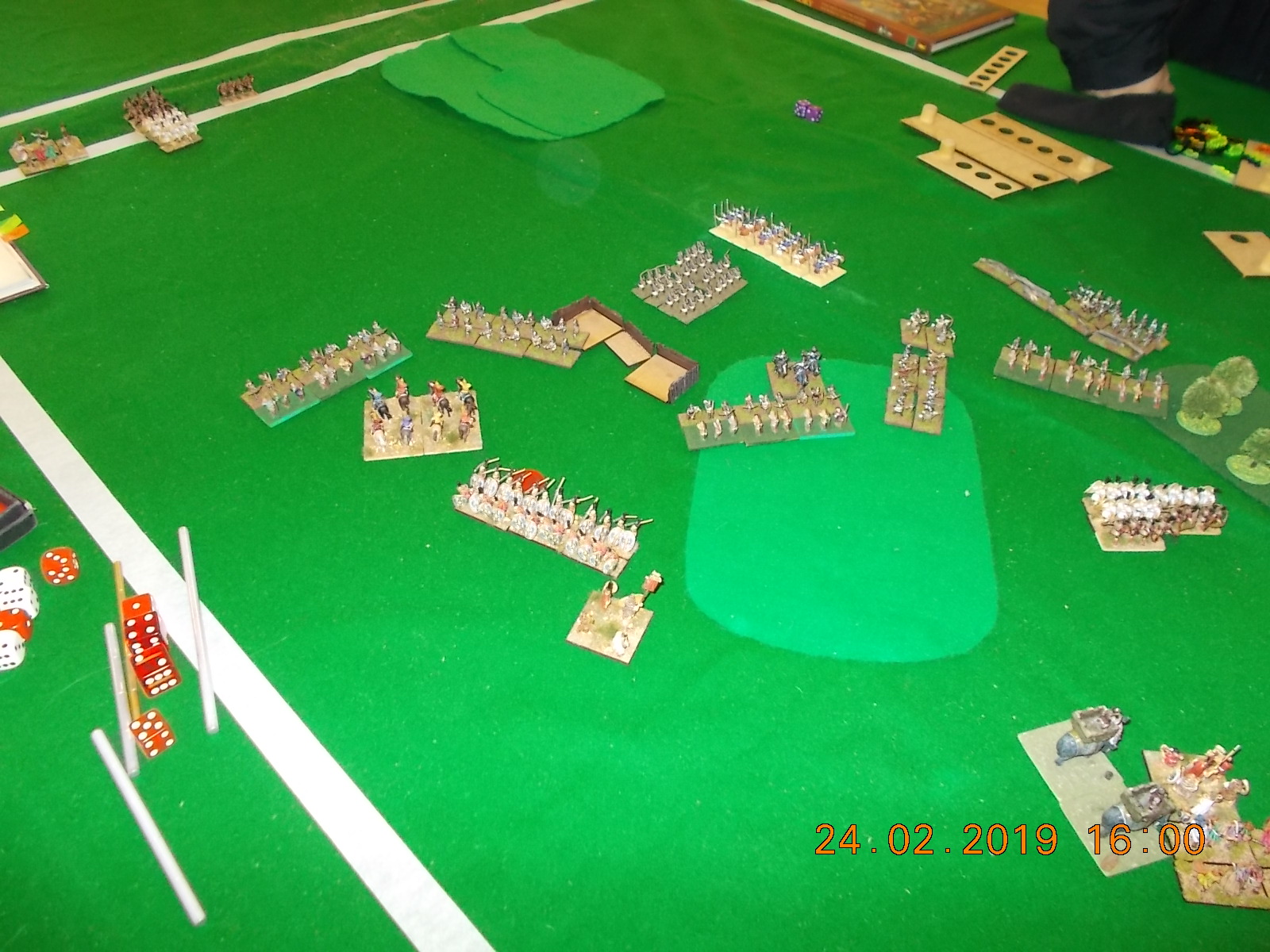 I had one chance to rally the Poor Legion and they gamely threw an 11 but unfortunately the 6 had to be re-rolled and I couldn’t repeat the feat.

I was just marshalling my reserves for a new attack when time was called. Another cracking game but what a seriously poor effort on my part.

Paul fully deserved to win the game but the final tally was 20-8 – not quite enough to overhaul my 14 point lead and I scraped home by 2 points.