Private message has been sent.

The swarms of light javelins were a real headache for the Assyrians. Thanks for the game Mike.
Top

Re: Reserve places are now available . . .

Hi Pete,
thanks for the reply.
Happy to wait for season 8 and the knockout - thank you very much.

Re: Reserve places are now available . . .

OK, I have put you in as reserve for LA and EMA. It is a long shot, but you never know.

I am waiting for just one remaining player - ggarynorman - to open their "welcome to the FOG2DL" message now so it looks like we have made a very good start to the tournament.

Not a good start for the Scots Irish!
Top

Private message has been sent.

While much of the battlefield featured flat, open terrain, both armies were immediately mesmerized by a small, tall hill in the left-center of the map. Both armies sent in their best troops, and a furious struggle ensued on along the slopes. The Macedonians took an early lead when they brought down Hannibal's elephants with a forest of sarissa points and stabbed the Shophet of the Sacred Band to death. The Carthaginians struck back with a furious assault by some Veteran Samnites that disrupted two pike blocks, and an overwhelming force of cavalry on the open right flank that came a hair's breadth from rear charging the engaged veteran pikes. Only a brave rear charge by some horse archers saved the pike line from a dreadful flanking by the mercenary Gallic horse. Unmolested for just long enough, the Macedonians pikes finished their bloody work and broke the majority of Carthaginian infantry line.

Good game to my valiant opponent.

The routing of Hannibal's elephants destabilizes the Punic line on the hill, while a dangerous gap opens on the Macedonian Right.

Okay, that's kind of a funny match up. Like the Spiderman pointing at Spiderman meme come to life.

Some honour restored for the Sots Irish

In Division D SawyerK (Pyrrhic plus Samnite) has issued a challenge to Barrold713 (Roman plus Pergamene). PW sent by PM.
Top

The Seleucids were posted up behind a Rough, but not Difficult, stream at deployment, with a force of horse archers and Cataphracts on their right, elite legions and pikes in the middle, and some medium foot and additional cavalry hidden in the woods on the left. The Carthaginians advanced on the river with a force of Scutarii, an elephant, Numidian Cavalry, and Noble Cavalry on the left, Heavy Warband and a reserve elephant in the middle, and Hoplites holding the right wing (held back in echelon), with a small screen of javelinmen to engage enemy skirmishers during the advance.

On their right The Seleucid/Parthian cavalry could not contest a rough terrain river in the face of medium infantry . The horse archers were caught or driven off by the Numidian and Noble Cavalry, and the Cataphracts charged by the elephant, while the Scutarii crossed in a heavily weighted flanking maneuver (6 Scutarii in total), quickly surrounding the pikes on the Seleucid right.

Meanwhile, in the middle the pikes and legions, understanding they were pressed for time (their right flank collapsing), and taunted by a few javelins, pursued over the river and, in a stroke of bad luck, the legions ended up diagonal facing the warband, revealing a flank that was exploited quickly. On the Carthaginian right the Hoplites held out, aided greatly by the fact that the Seleucids were spread out a bit too much at deployment, especially on their left where the units left in ambush in the forest did not arrive until the battle was nearly over. The Seleucid middle may have raced forward to secure the river too fast for their left wing to catch up. Seleucid luck in the middle went from bad to worse, as the legions breaking and the pikes pushing the warband back opened multiple vulnerable flanks, along with disruptions caused by the broken legions. Overall, the Seleucid/Parthian army had had no room to maneuver their cavalry, were caught at disadvantage on a rough river by medium foot, deployed too spread out (many elite units barely participating or not participating at all, including 1 superior legion, 1 superior warband and 1 cataphract) and were simply outnumbered in infantry.

a pic from the end of the battle: 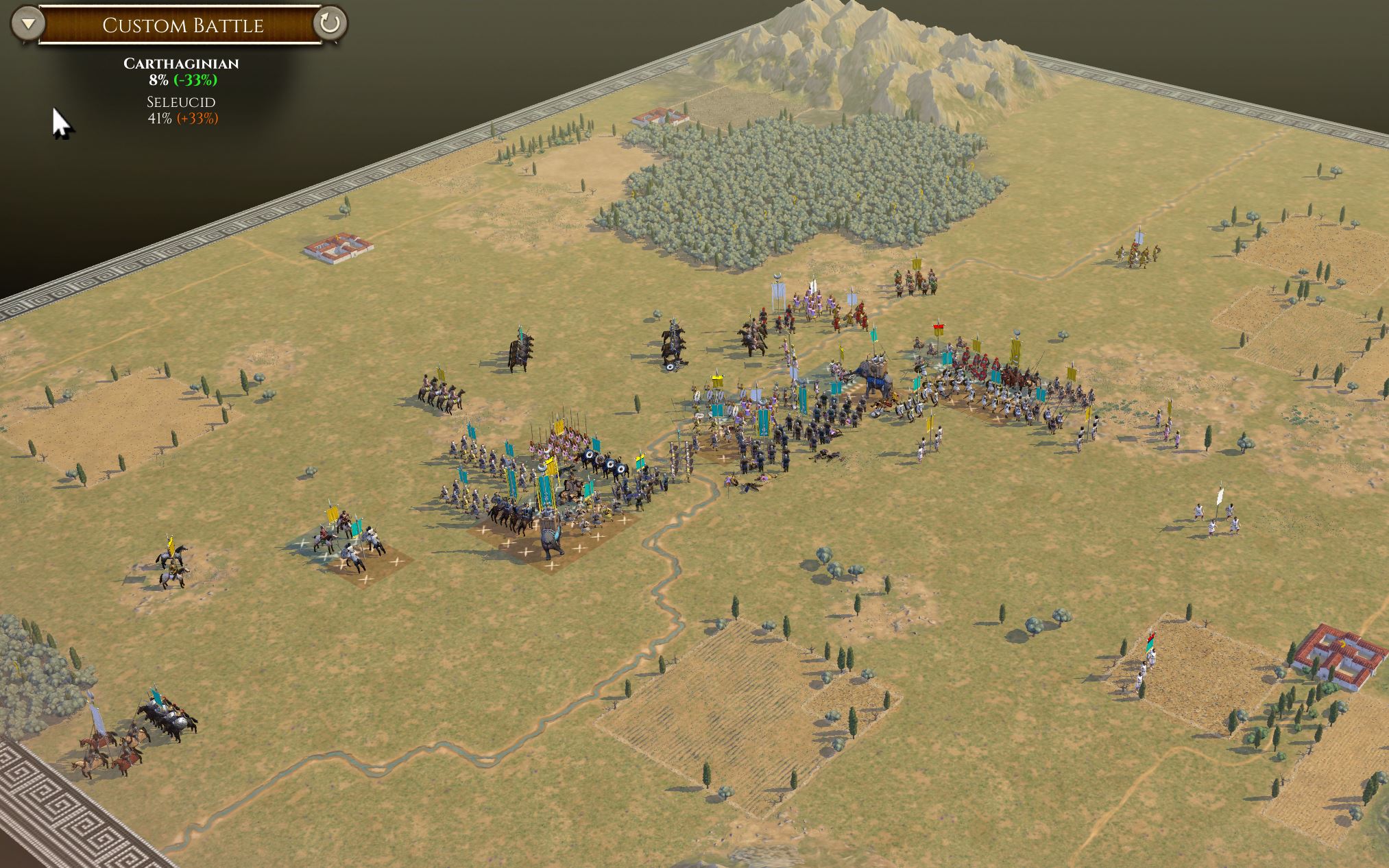