I have seen many an AAR discuss the grand encirclement but I can't find a good explanation of how to pull one off. Is there a walk through such an effort?

Edmon has a great video on encirclement: https://www.youtube.com/watch?v=_8o6sXHhfy4 - this helps on the basic level to better plan encirclement tactics. It does not show grand encirclement there, but should give a better understanding of the principle behind it.

Overall, what's really critical is taking a slow, detailed look at the map and foresight where supply hexes are and where you can cut off an enemy army. You can have a look at this screen from my Panzermon run and Warsaw scenario: 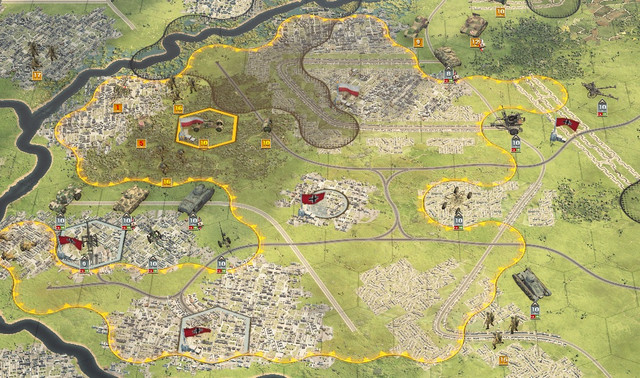 It shows that Polish units are entirely cut of supply. The round supply hex in the middle was captured by me. To the West, they are blocked by a major river and to the east my units are set up in a way that applies zone of control of the each outer edge hex of the encirclement area. Each unit projects it one hex around it and the marsh hex at the very top (northwest of the Polish armored car) blocks supply as well, so I do not have to have a unit there despite enemy presence otherwise. 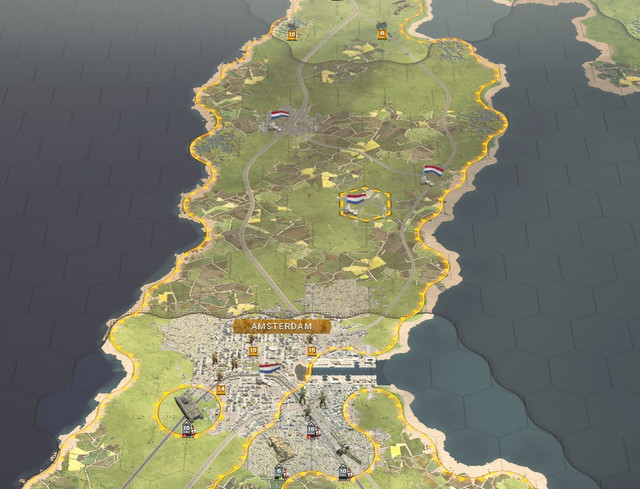 This screen is similar. In the south, my units block hexes around them and cut the Dutch off and in the north, while not visible here, there is a very narrow passage that a single unit ca easily block as well.

Most of the time it's not as convenient, but then terrain comes in. Needless to say, Flexible command and the ability to split units gives the ability to cover double the area you would be normally able to cover.
Top

Thanks. Can't watch the video while at work, so you cut them off and wait until? They surrender naturally over time? I know encircled units don't resupply.
Top

Yes, you need to wait some time. Encircled units get suppression per turn (double with Deadly Grasp trait) and do not loose suppression inflicted by other means such as artillery, air bombardment or other attacks and they also cannot resupply (but they keep entrenchment). With patience you can sully suppress a unit so it cannot shoot back, but usually you do not need to wait that long, just to get it to a suppression high enough that you can attack relatively safely. They will however not surrender on their own. To force a surrender, you need to attack a unit that is not entrenched over the base terrain entrenchment level (entrenchment number is displayed in grey then instead of green) nowhere to retreat if it would and having it retreat is easier with suppression generated by encirclement. Closing the path to retreat can be be done by blocking hexes, pushing the unit with attacks until it runs out of movement points, or special heroes.
Top

Grand encirclement is just a fancy name for a large-scale encirclement that traps a large portion or even the bulk of the enemy forces in a scenario; most of the time encirclements are just tactical, with a dozen or so enemies trapped at most. The Wehrmacht campaign offers a few good opportunities, especially the Kiev scenario as that one is clearly designed specifically for a grand encirclement: 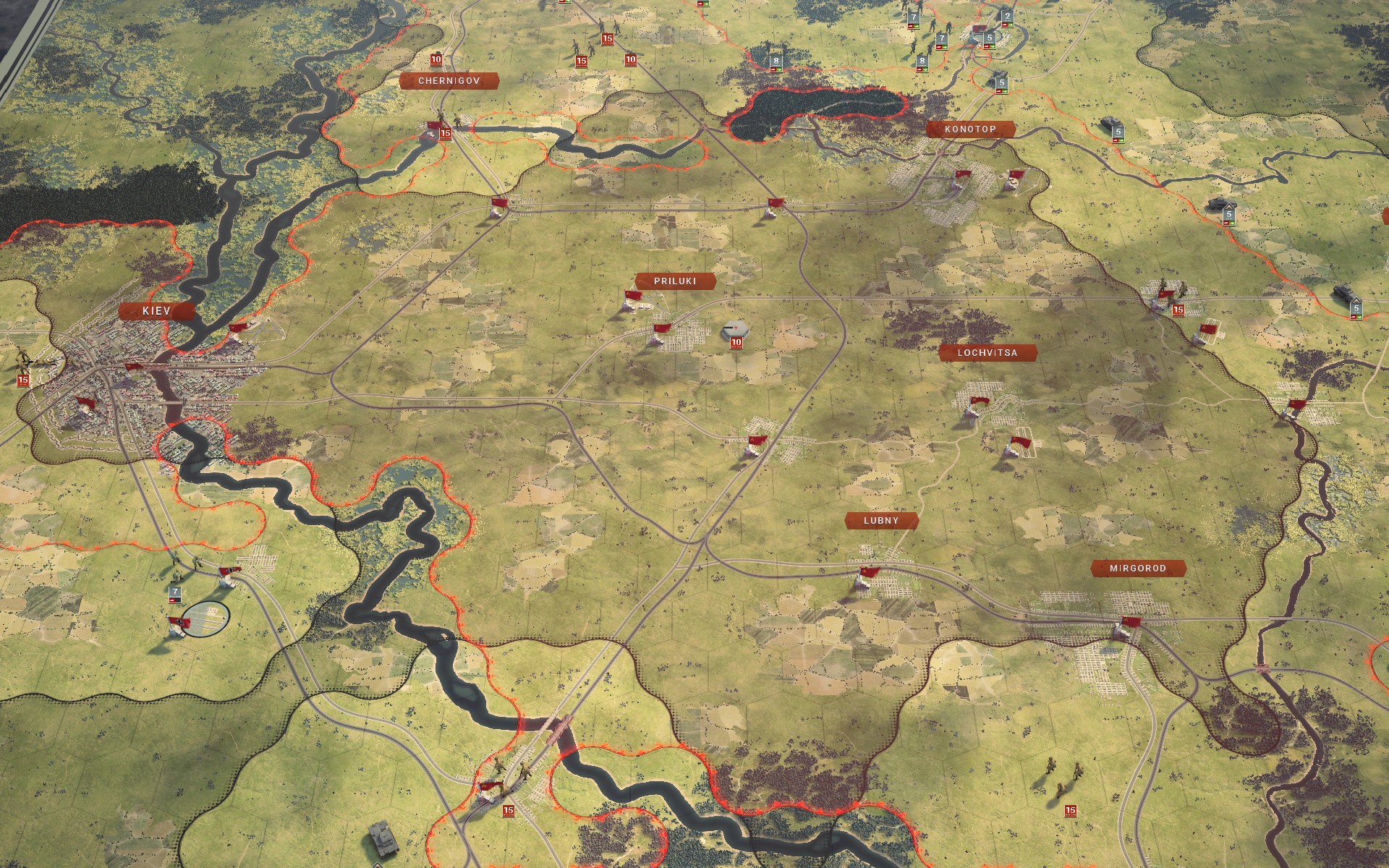 Moscow '41 and Kursk are two other scenarios where some careful planning can pay excellent dividends, but they are not specifically designed for it: 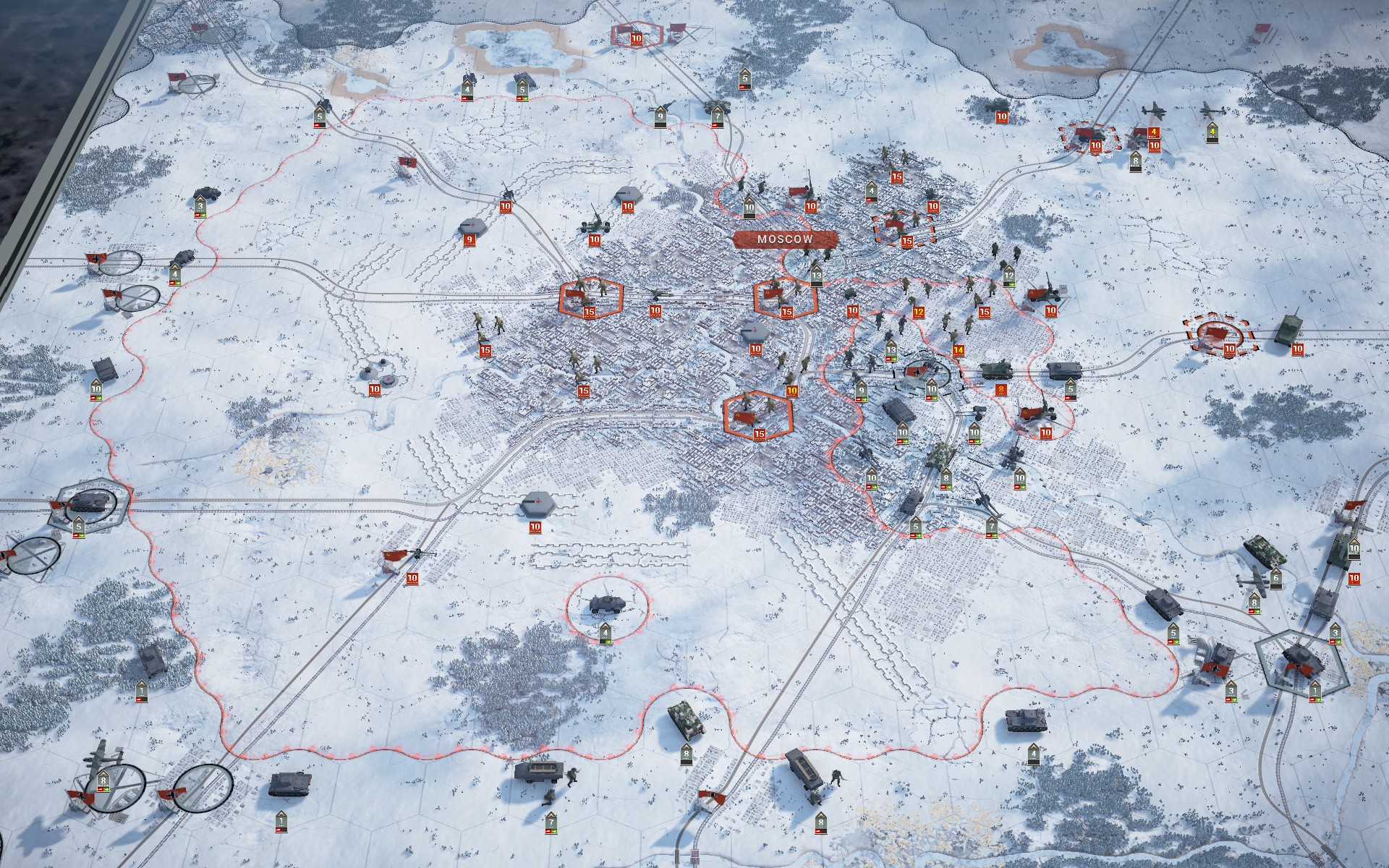 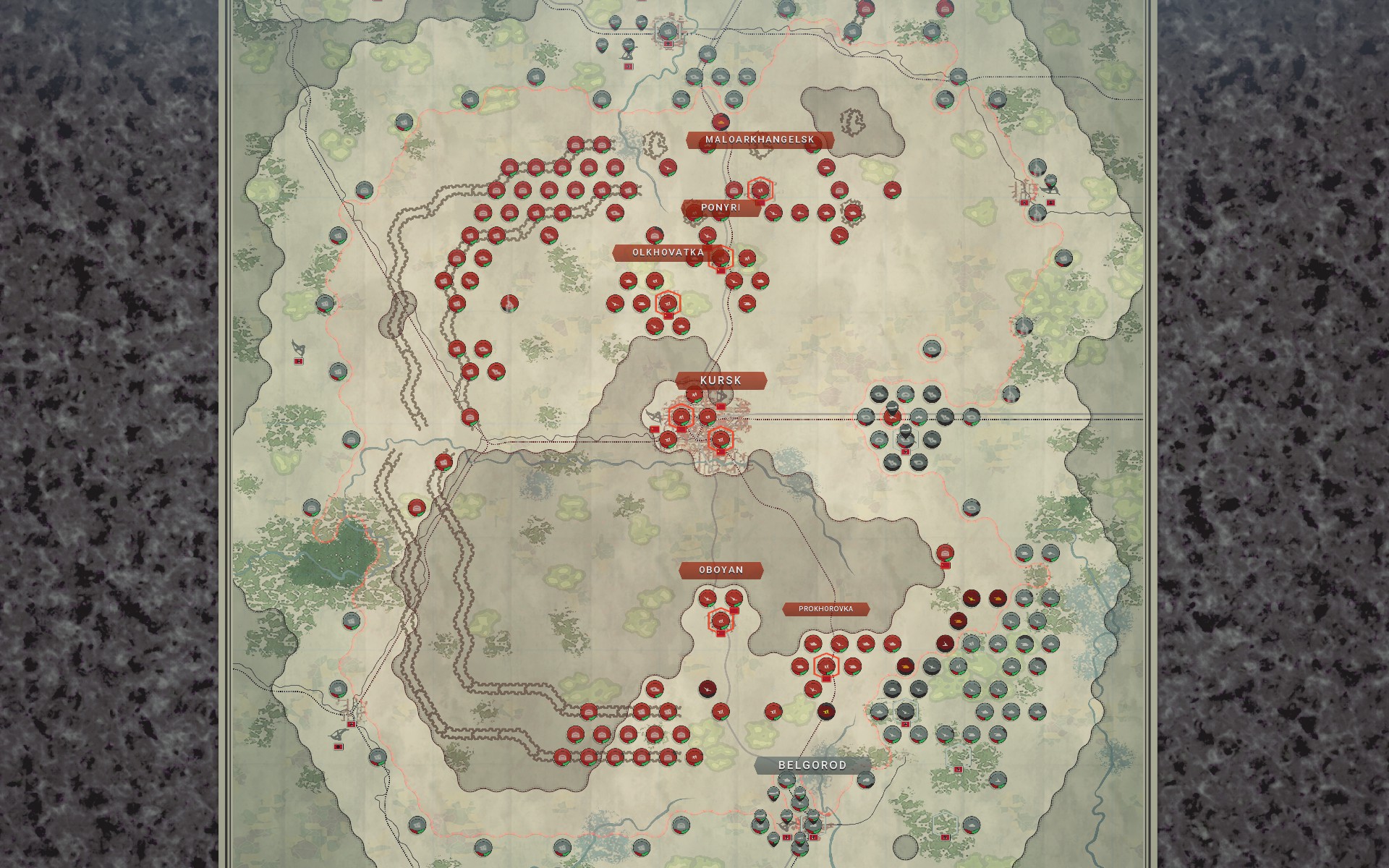 The basic theory is the same; it's just the scale that is different.
Mildly pretentious Swede. Goes by Path on most platforms, including Steam.
http://www.slitherine.com/forum/viewtopic.php?f=596&t=98034 -- Generalissimus AAR (no Trophies / Heroes)
Top

Thanks to you both. If I understand correctly, the grand encirclement is to create the suppression and eliminate the supplies but you still have to attack to get the surrender?
Top

Pretty much. Cutting the supply line to units results in their being automatically suppressed over time (2 steps per turn, or 4 with Deadly Grasp), and eventually they will be fully suppressed and unable to fight at all. You'll still have to attack them to trigger a surrender, though (and they cannot have an entrenchment level above the base for the hex).

Since the inability to source supplies is what causes this, it's entirely possible for units to become encircled without technically being, well, encircled, for example by landing on an island without a port or supply hex.
Mildly pretentious Swede. Goes by Path on most platforms, including Steam.
http://www.slitherine.com/forum/viewtopic.php?f=596&t=98034 -- Generalissimus AAR (no Trophies / Heroes)
Top

Those enormous encirclements are particularly nasty for units that require fuel to move. If you look at SineMora's second screenshot, a tank unit sitting between Kursk and Olkhovatka could not even try to fight its way out of this encirclement, because it could not drive all the way to SineMora's forces before running out of fuel. Since encirclement prevents resupply, the fuel those units start with on the beginning of the first turn of their encirclement is all the fuel they will ever get until they manage to re-establish their supply lines (or until they are killed or surrender - although I suppose they don't get any fuel in those cases, either

). If SineMora could afford to hold this current position for two or three turns, the units in the center of the area would be sitting ducks. Even if they didn't try to drive to the front and had just stayed in place, they'd be so suppressed by the time SineMora tightened the line that they'd be unable to fight back meaningfully, if at all.

Leg infantry can always walk, of course, and other units with organic transports can still use their native move points, but armor, recon, and self-propelled AT suffer worse from these big encirclements than other units do because their chief advantage, mobility, can be badly constrained.
Top
Post Reply
8 posts • Page 1 of 1