After the Christmas holidays, the moment to see what happened in the WTC semi-final has arrived.

The plan was for there to be two very intense and interesting challenges:

Furor Gallico vs Hell on the wheels, France vs USA. 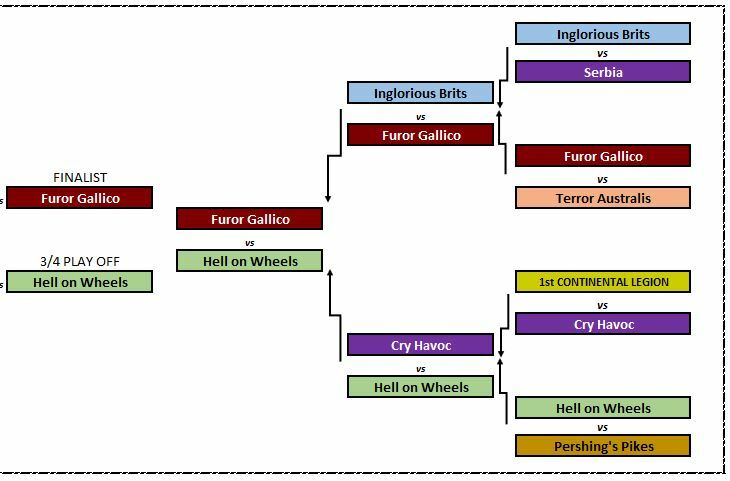 The Gallic warriors against the Americans, this match seemed to be very balanced and oriented towards being a tough battle to the last man. However, the blues with an extraordinary performance carried out a brilliant 3 to 1 victory! Their motto represents exactly the spirit of the french team, "Impossible, not for (the) french!"

The after action report written by the captain of the blues, random27 (Arab) who was playing against Kharvon (Navarrese), went as follows: “His sportsmanship is significant". “At the beginning of the day, the Arabs couldn't see all the Navareese army. A big hill overhung the middle of the battlefield. The Arabs sat on it and the irregular Navarrese awaited them in a big forest on the left and in hills on the right.”

“In front of the forest, a big force of light troops scared the Arabs and stopped their advance. Once again the dailami wanted to fight and decided to attack troops in the forest in a maybe-too-optimistic charge. They saw that they were outnumbered too late and were taken from the flanks. Despite that, they managed to continue fighting for more than ten turns.

The second part of the Navareese army, consisting of unmounted horse lancers , launched their attack and tried to outflank the Arab army. They were repulsed and since the Arabs were too numerous on this side, Dailami knew then that they would die. Their sacrifice gave the victory to Gallico.

Thanks for the great game, the win could have gone to either side". 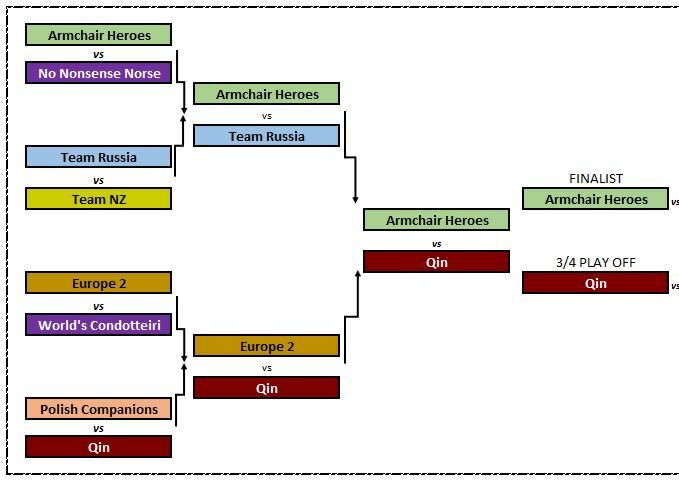 This battle was a dramatic and epic clash of arms. The result of the challenge was a perfect draw, with 2 victories for each side. This means the final result was decided by the percentage difference, which was just 6% in favour of the British team.

In this battle the hero was Ericdoman1, with a crushing victory (10% - 43%). This created a big gap that was impossible to fill. The second victory was won by Captainwaltersavage, here is the after action report written by the British player:

"A very strange battle. It was like fighting in a mirror. We brought very similar armies, though I brought more lights and cavalry and the other side brought more dismounted knights. The main feature of the battle was a deep stream that was dividing the battlefield. The most significant other terrain was a large tract of rough ground on my right on the other side of the river.

I went right, as there was a slight bend in the river that gave me a chance to sneak into the rough ground. I felt I was going to get destroyed in the open and felt the battle came down to how well I could hide and battle in the rough ground whilst avoiding the mounted and dismounted knights.

The Chinese Germans came on in a very efficient formation that drove my left and centre back. My right had all the success and their greatest triumph was when 4 units surrounded a unit of dismounted knights and eventually dragged it down like a pack of hunting dogs on a lion. It was all down to the timing, and the battle ended just at the point that the heavy units of the Enemy were about to crush my centre."

Regarding Qin, there is no doubt that the level and skills of the team and the talent of the Chinese players, was worthy of the finals with the british. There is a stone in the Egyptian desert and some very apt words were chiseled into the stone by 7th Bersaglieri Rgt, that represents very well the spirit of the Qin team: "Mancò la fortuna, non il valore" "it lacked luck, not valor".

The program of the finals includes: