The next part is a subject dear to the hearts of many, incorporating generals into your scenario!

While compiling your work sheet (see part 1 of this series) you should have identified the names of the generals that you want to have in your scenario, their commands and how effective they were. There is nothing to stop you having as many generals as you like in a scenario, but the custom battles have a maximum of 4 per side and I think you should have a good reason for having any more than that. One reason would be if your scenario is very large, I think a good rule of thumb would be one general for every 12 units, if your scenario has more than 60 units per side I don’t think anyone will complain if you have more than 4 generals.

You might also want to increase the number of generals in an outnumbered army as a way to make the scenario more balanced. Remember, generals make an army more effective, they give combat bonuses, cohesion test bonuses and free turns to units in command range. So if you give a smaller army more generals than the enemy you are effectively making them stronger. 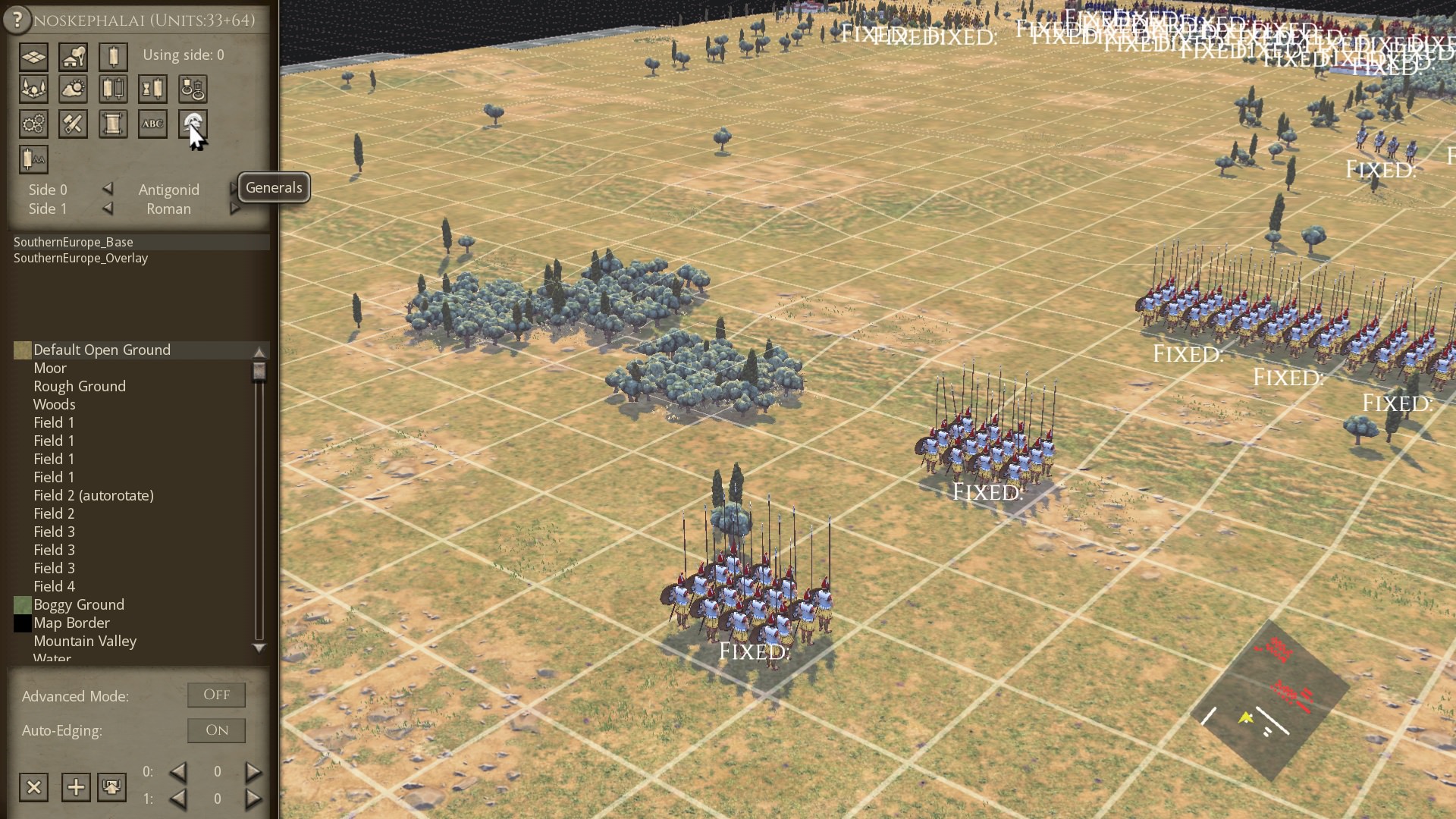 The “Generals” window will pop up: 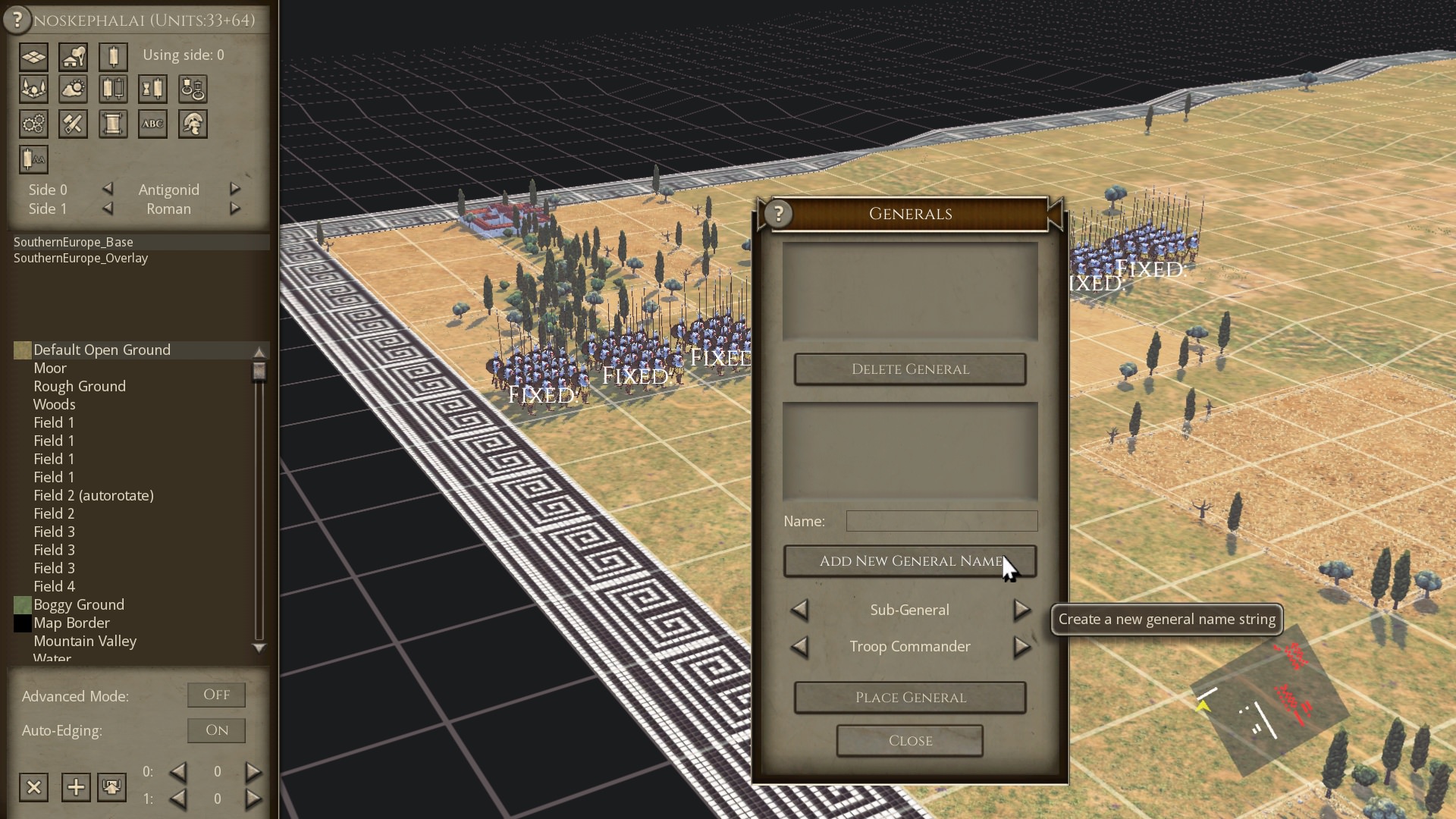 We can now start writing in the names of all our generals that we want in the scenario. So click in the Name field and write the name that you want, in this case I have put in Philip of Macedon, the commander in chief of the Macedonian army in this battle: 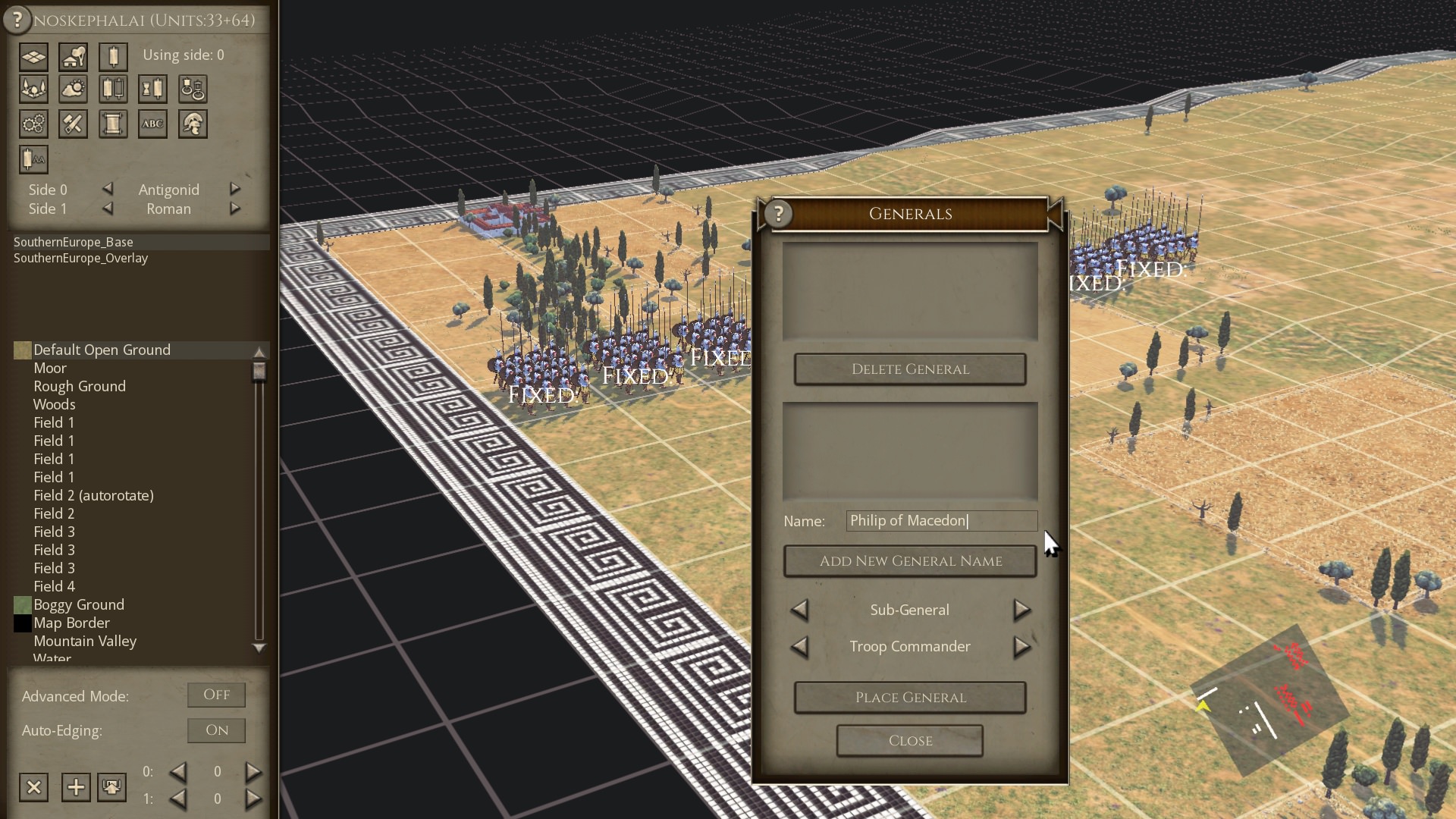 Then click on the “Add New General name” button, you will see the generals name added to the second box in the window: 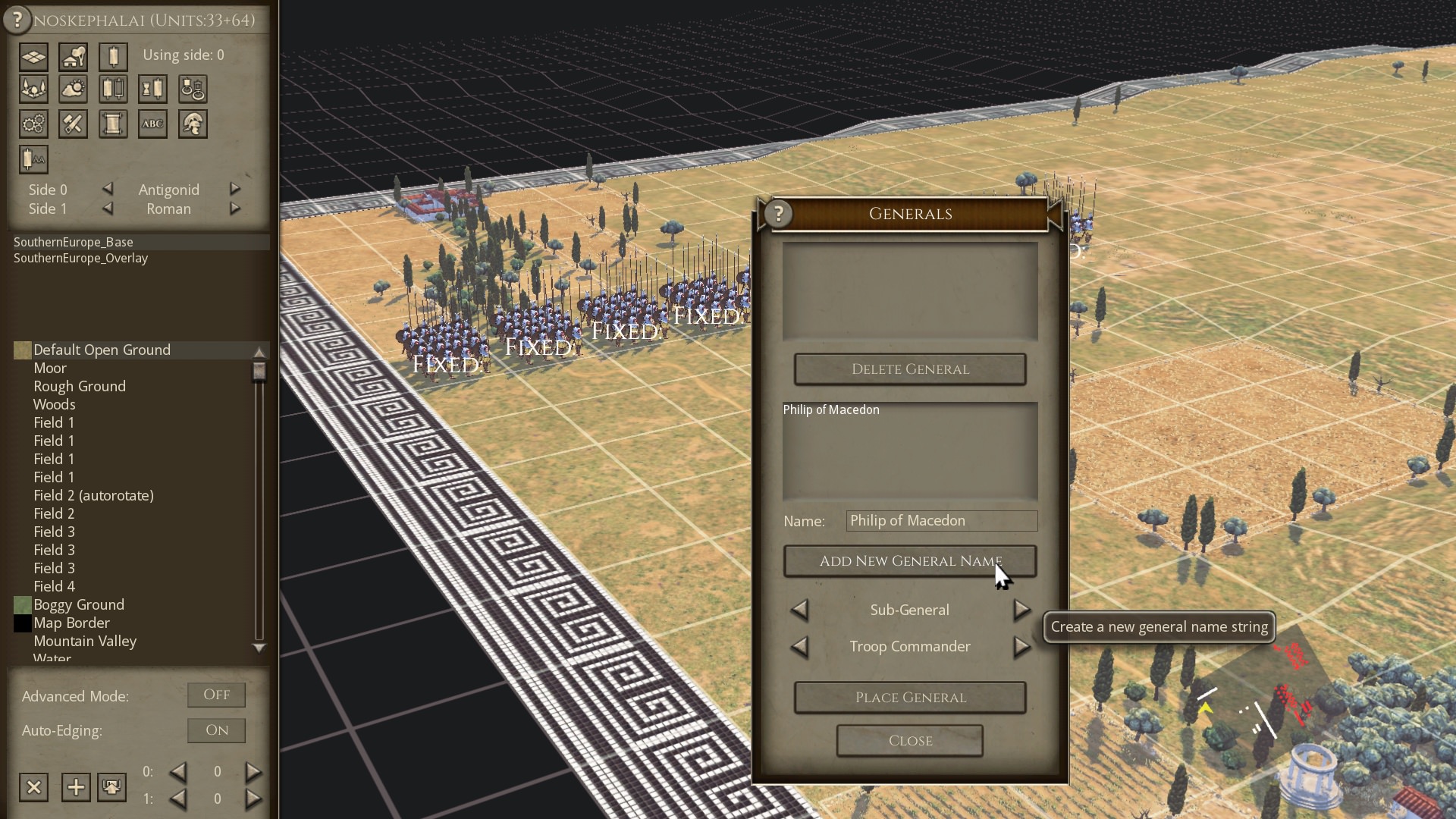 Now we want to place Philip on the map with one of his units, so make sure you are in the Unit Placement Mode, by clicking the button near the top of the editor. 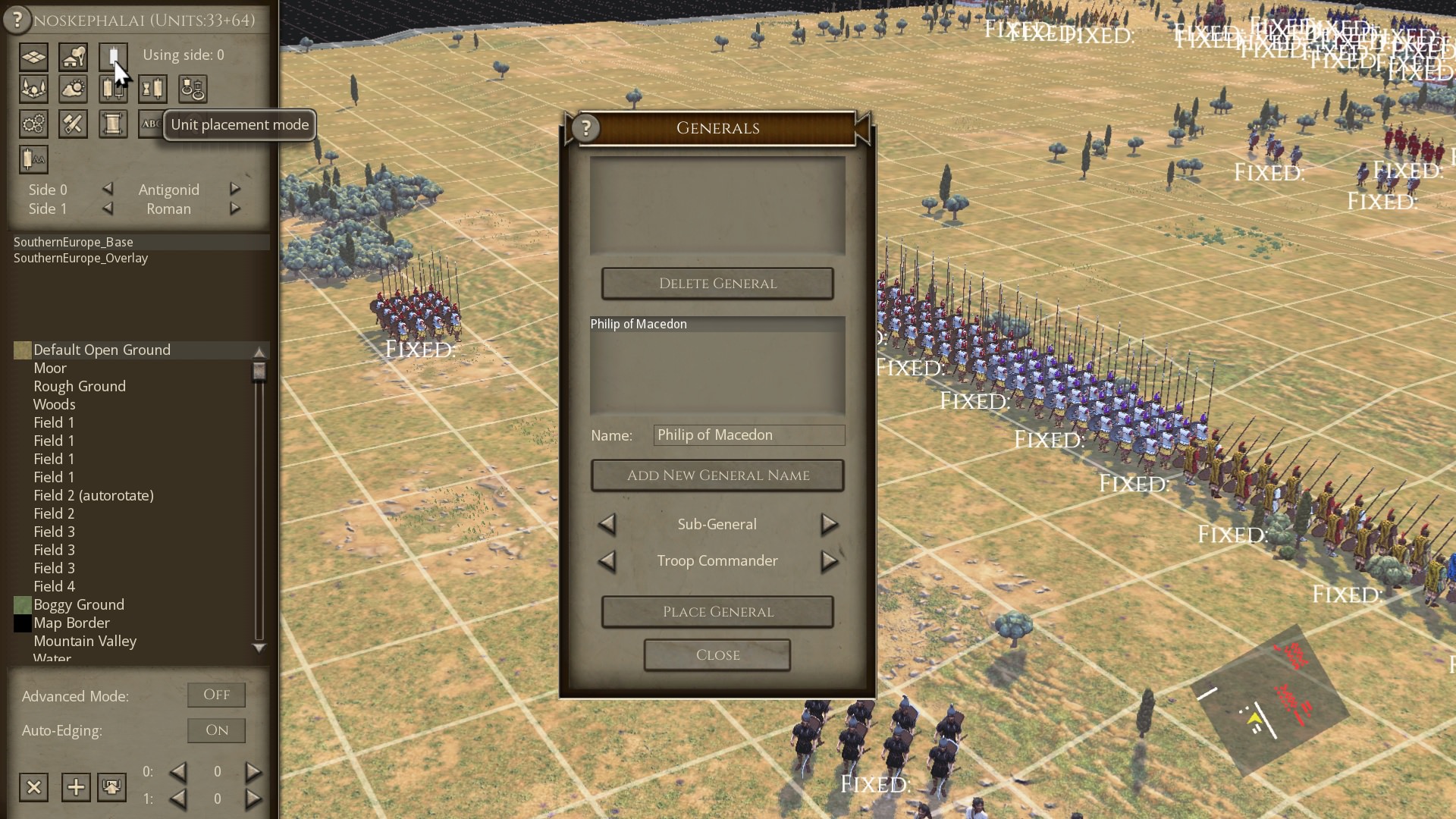 Then click on Philip’s name in the second box in the “General” window, so that the name is highlighted. Then make sure you select the desired General type and quality ranking using the arrow buttons at the bottom of the window. In this case I want Philip to be C in C and Field Commander. 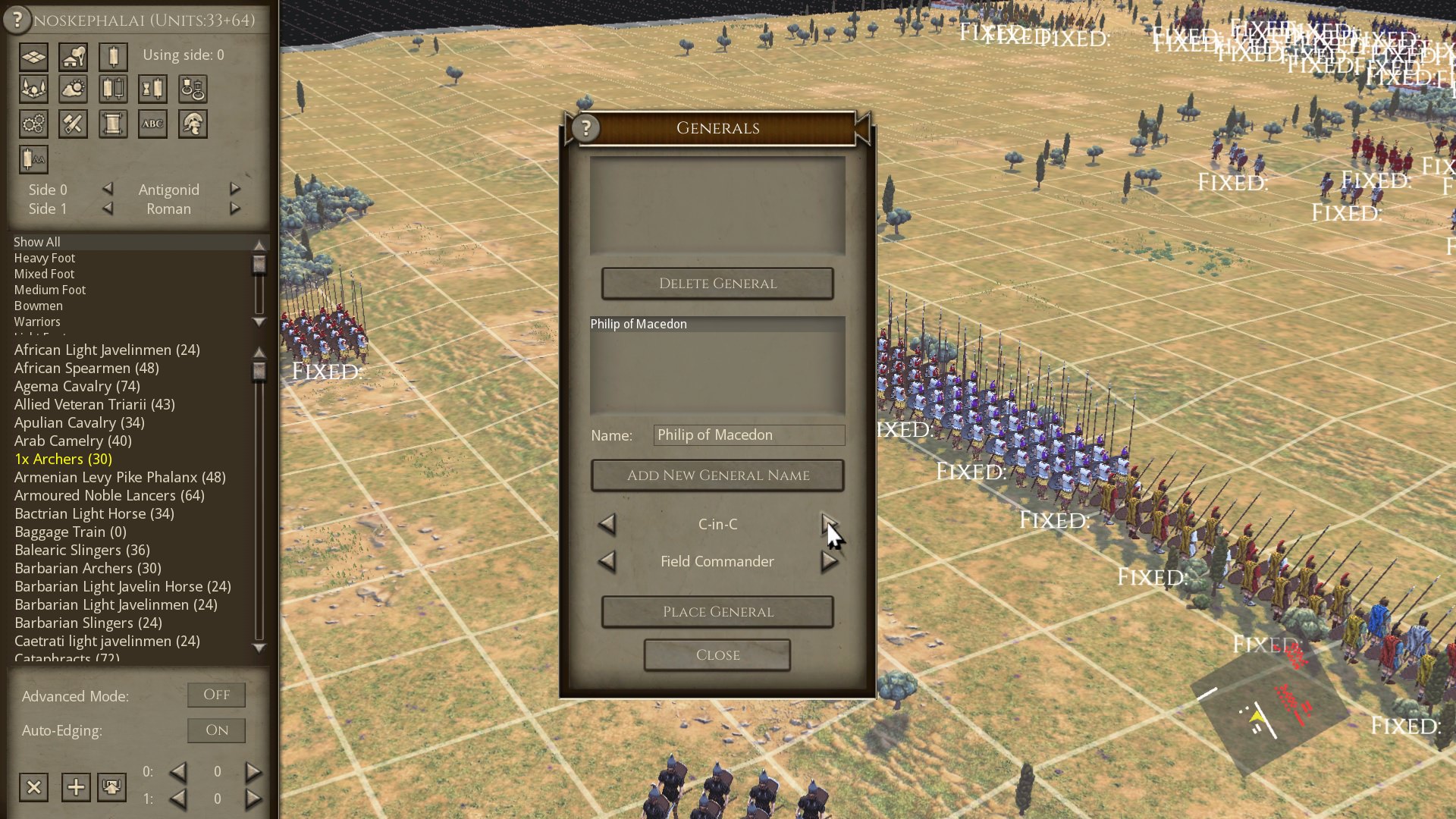 Then click on the unit on the map where you want the general to go. In this case I want him to be with the left hand Agema Pike Phalanx unit, this will put him nicely central in his infantry line so that his bonuses can affect the maximum number of units.

Then click the “Place General” button, this will create an entry in the first box in the window, with the general’s name, his rank and rating, his location coordinates, and the unit he is with. 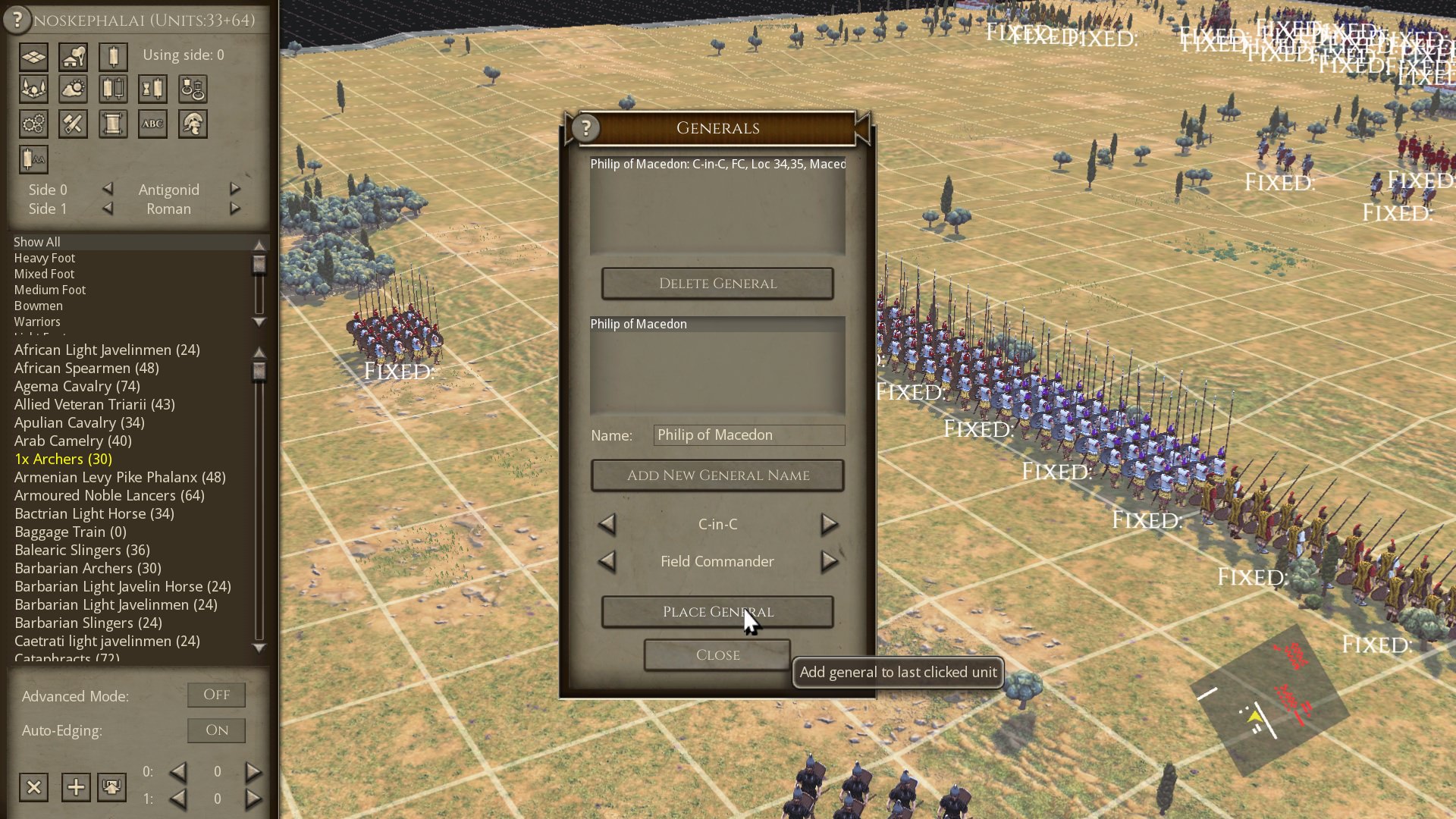 You have now placed the first general. Just repeat this process for all the generals that you want in the scenario, for both sides. When you have finished just close the “Generals” window, and save the scenario.

The generals names are saved to the Text9.txt file in the scenario folder. Therefore they can be easily modified outside of the editor if you have made any spelling mistakes. You can also create new general names in the Text9.txt file, but you would have to place them with units through the editor. The entries look like this:

So if I wanted to create a new general to use in the scenario I would just copy one of the lines, and renumber it IDS_CUSTOMGENERAL_7, then write in my new general’s name within the quotation marks. When I next open the scenario in the editor, the name will already have been added to the list in the second box of the “Generals” window, and will be ready for allocation to a unit. You could in fact create all the generals names that way before using the editor to allocate them to units, some might prefer to do it that way.

Often you will have a C in C and two or more Sub-Generals per army, and they will be mostly Troop commander or Field commander rating. Sometimes you might need to use an Ally General, so you would create him as an Ally General (the arrows go in the order Sub-General, C in C, Ally General) and then place him in a team solely consisting of his own nation/faction (see part 4 of this series).

Only use the Great Commander rating when it is justified, ie; someone of the calibre of a Caesar, Alexander or Hannibal. Of course, it does not have to be someone that famous, there have been plenty of great generals that are relatively unknown. There again, it might have been someone who was normally quite average, but in this particular battle was inspired or very lucky.
Last edited by Paul59 on Sun Dec 10, 2017 8:40 pm, edited 1 time in total.
Field of Glory II Scenario Designer - Age of Belisarius, Rise of Persia, and Wolves at the Gate.

Very nice, thankyou! OK so now you have your scenario, what files do you need to put together to upload it to the forum? I know the answer may seem obvious but I think there may be some less obvious files that have to be included.
Top

vakarr wrote:Very nice, thankyou! OK so now you have your scenario, what files do you need to put together to upload it to the forum? I know the answer may seem obvious but I think there may be some less obvious files that have to be included.

Your whole custom folder from

Alternatively PM me, and I will give you my email address so you can send it to me. I will check it and give feedback, and if it is all good put it on the FTP for in-game download.
Richard Bodley Scott

These are all the questions that have kindly been answered by Richard when I created my first scenario, I think other people might like to see all the answers in one place (Richard edited these and I think I have copied the edited version but can't be sure as I have lost access to that account for some reason):

1. How do you get your scenario placed on the world map that shows on the campaign/scenario start screen?

2. How do you change the attributes of units so they will fight better? I note that it says that the Velites fight better than your average light javelinmen.

A: Only because they count Protected whereas the others are Unprotected. You need to put a copy of the Squads.cvs file from /Data in your custom folder, and edit that. e.g. By increasing the troop quality by altering the Elan and Experience values in the spreadsheet.
To get a new Thracian peltast troop type, like a velite only maybe a little better morale - is it sufficient to modify squads.csv or are there other files that have to be changed?

You can add them to the Squads file. Use an ID number (column B) above 800 to avoid clashing with future DLC units. So if the ID was 800, you would need to add the following to your text1.txt

A: You can't turn a scenario into a campaign, the campaigns use random map battles. For the various decision options see the CustomCampaign.txt file comments in one of the campaigns. You can have up to 15 battles in a campaign, but if you have so many the army will be completely elite by the last one, unless you use various tricks like resetting the army, or making the player put a large part of it in garrison.


4. OK so now you have your scenario, what files do you need to put together to upload it to the forum? I know the answer may seem obvious but I think there may be some less obvious files that have to be included.


A: Your whole custom folder from


5. How do you get your scenario details included in the scenario list screen?

A: it's in Text2.txt and here:
You specify it in the Campaign.Txt file in your custom folder.
[ODRYSIANS_VS_TRIBALLI]
SIDE0 20 -
6. where do I find the list of possible armies and their numbers? What number is Thracian?

7. How do you get the battle screen to say your custom army names e.g. "Odrysian" and Triballi" instead of "Thracian A" and "Thracian B"?

A: Add these lines to your text1.txt file

If "Odrysians_vs_Triballi.BAM" is the name of the scenario file.

8. the AI controlled infantry are all in thick woods but they are all visible during deployment. How do I fix that?
A: Firstly, you will need a scenario script. In the main directory of the main build you will find a file called SCENARIOTEMPLATE.BSF.

and change its name to


substituting the location values for the lowest and highest corners of the rectangle you want to hide troops in, as follows:

A: Fixed does not mean they are fixed in place, but they are fixed units as opposed to units that can be purchased with points. In the Editor there is a toggle for whether the player gets a Deployment phase or not. It is the right hand button on the second row. To prevent either side getting a deployment phase, you need to set it so that there is a circle under both banners.
Top

How do AI units get assigned to a General - is it automatic?

How does the player assign Units to a General if the case of a fixed deployment that allows for the selection of a few units?
Top

All units assigned to the same team (in the AI dialogue) as his unit are in his command.


How does the player assign Units to a General if the case of a fixed deployment that allows for the selection of a few units?

They can't. He will command all of the units in his team.
Richard Bodley Scott