I’d checked Phil’s list and knew this would be tough. Lance Bow* are probably one of the most improved types within V3. Most of the benefits of the lance – good shooting but can’t be subject to an unprompted charge as they’re not shock.

Phil won initiative and chose hilly. I opted for the brush and added 2 more brush and 3 unevens whilst Phil added a marsh and 2 forest to try and close the table down. Most of the terrain stayed on table but was mainly on the edges.

Phil split his army into 2 cavalry wings, 1 all protected, the other mainly armoured, with the infantry aimed at a central piece of uneven ground. I hoped to counter the armoured cavalry with my halberdiers and XB whilst shooting up Phil’s MF in the terrain. 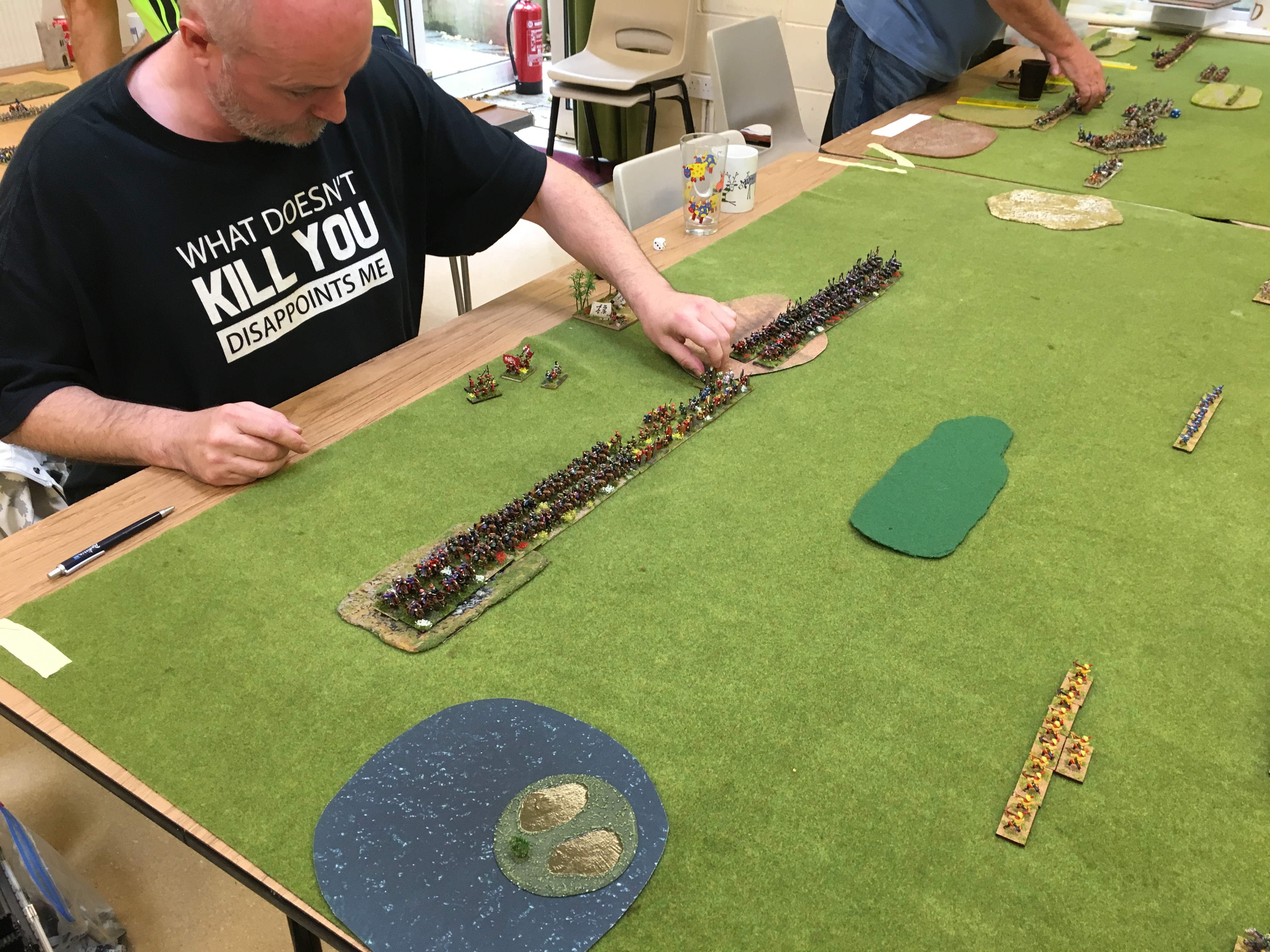 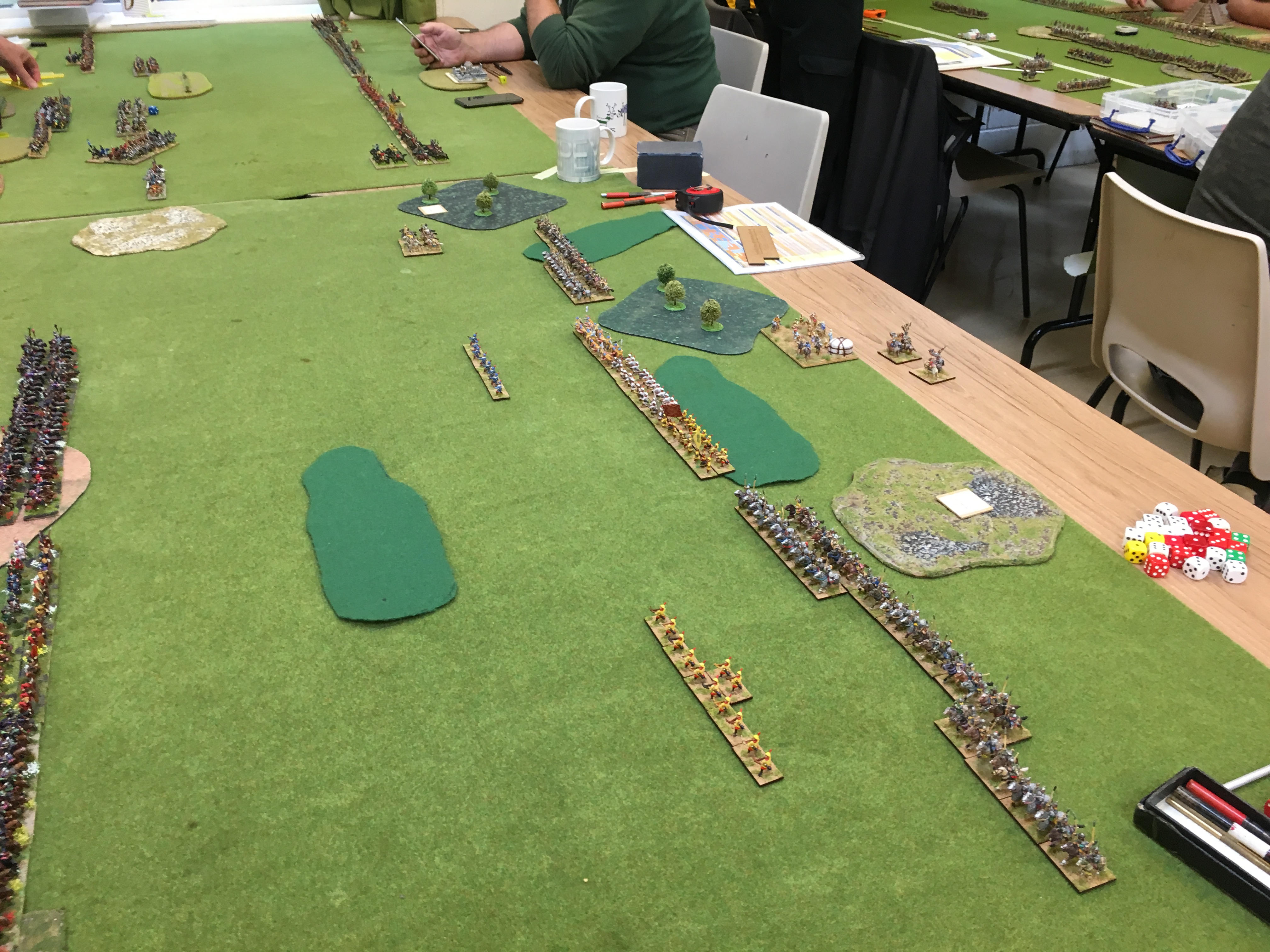 Phil moved first and advanced across the line. With the benefit of hindsight I should probably have kept my centre back in the terrain. My LH were unopposed and were quickly round the flank. 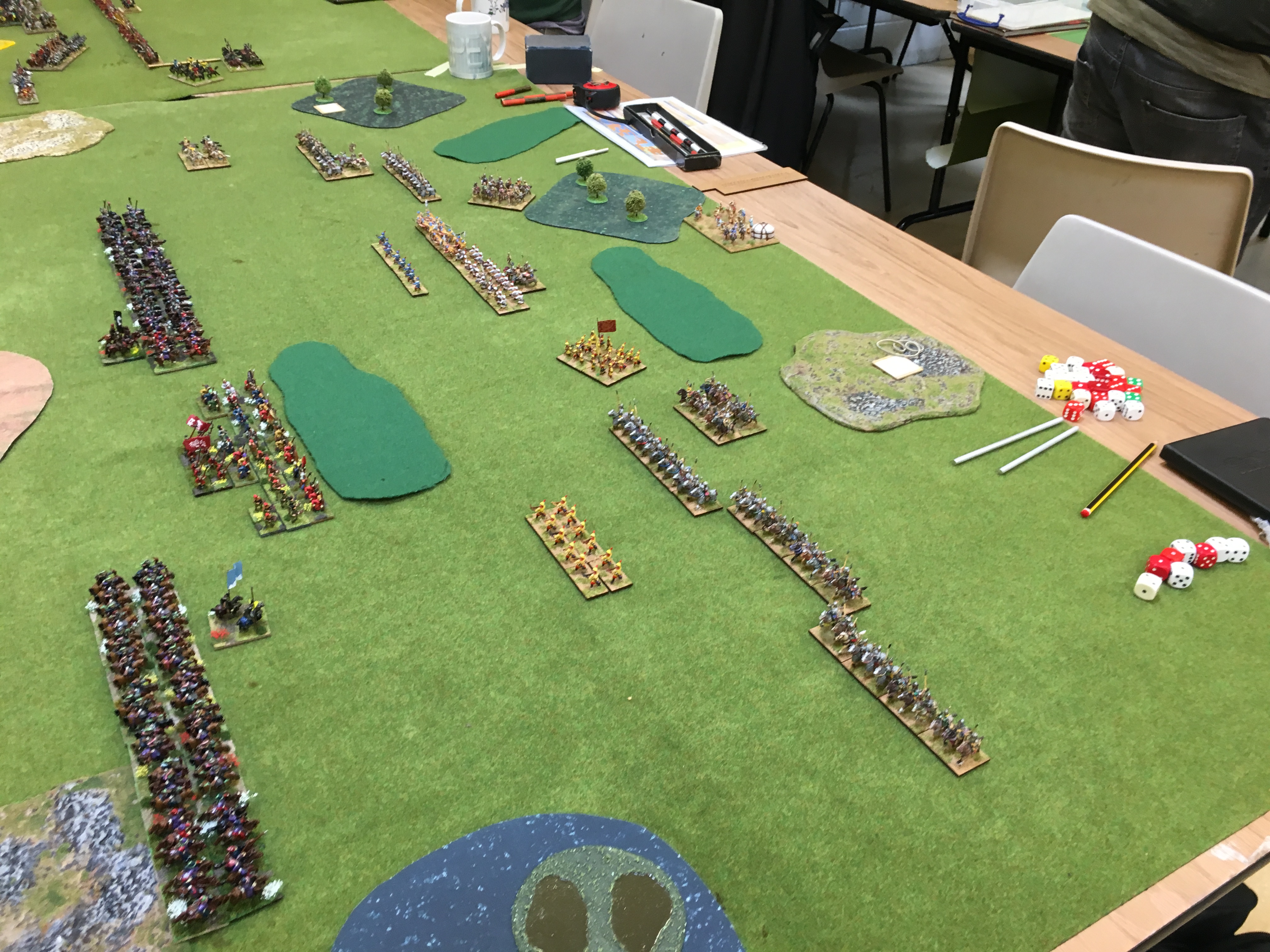 I diverted my MF bow to take the XB shooting and hoped to combine with the Guard cav to shoot up Phil’s XB. This worked reasonably well and the MF disrupted. 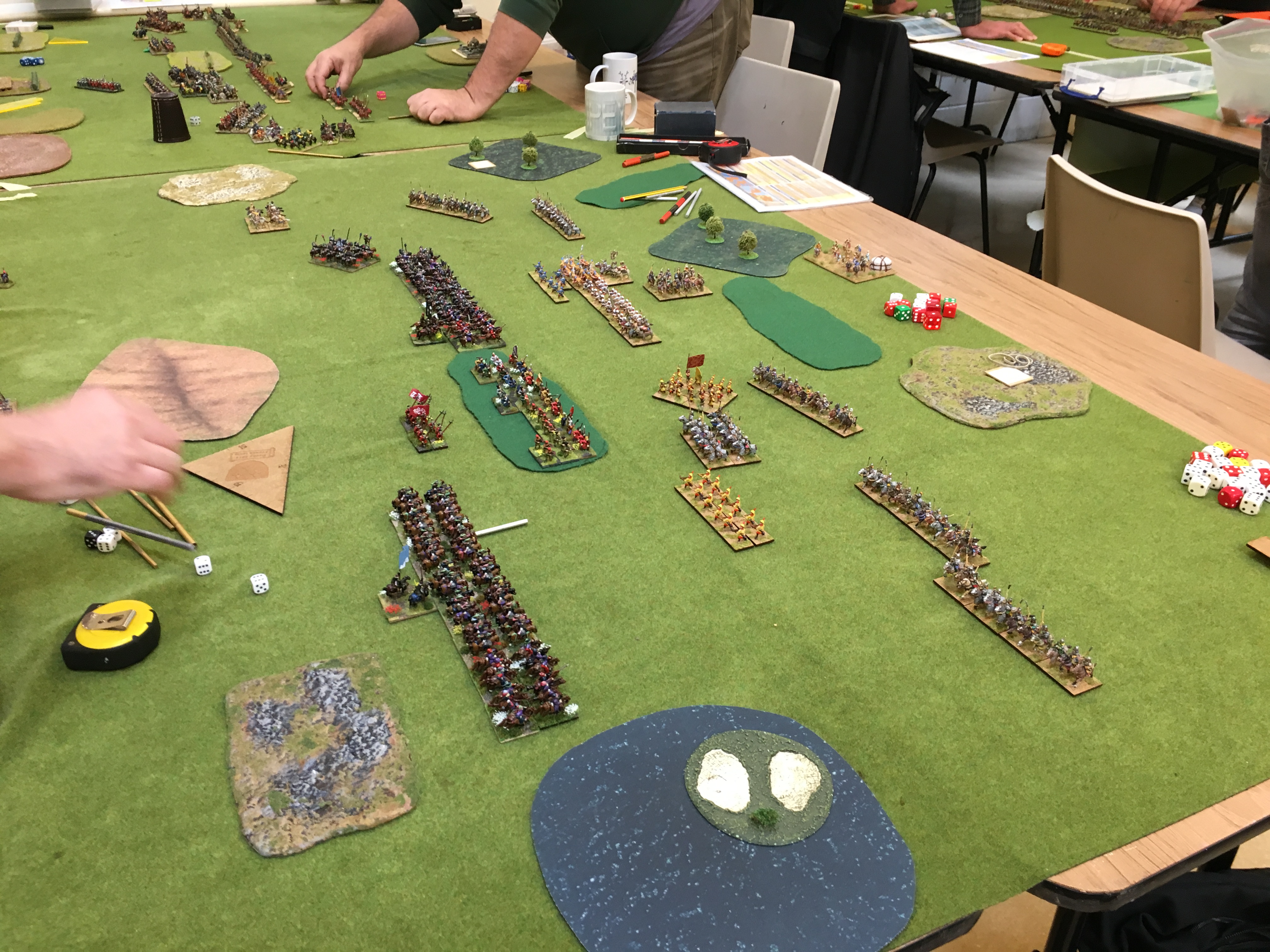 In the centre Phil charged into my XB and HF but without success. Both BGs broke off. One didn’t get too far being stopped by friends so my HF charged in the hope Phil’s cav would not be able to break off. Unfortunately I killed a base which opened up a sufficient gap to allow the break off. The cavalry charged back in and weight of number told.

Elsewhere we were swapping disrupted markers as the volume of shooting told. 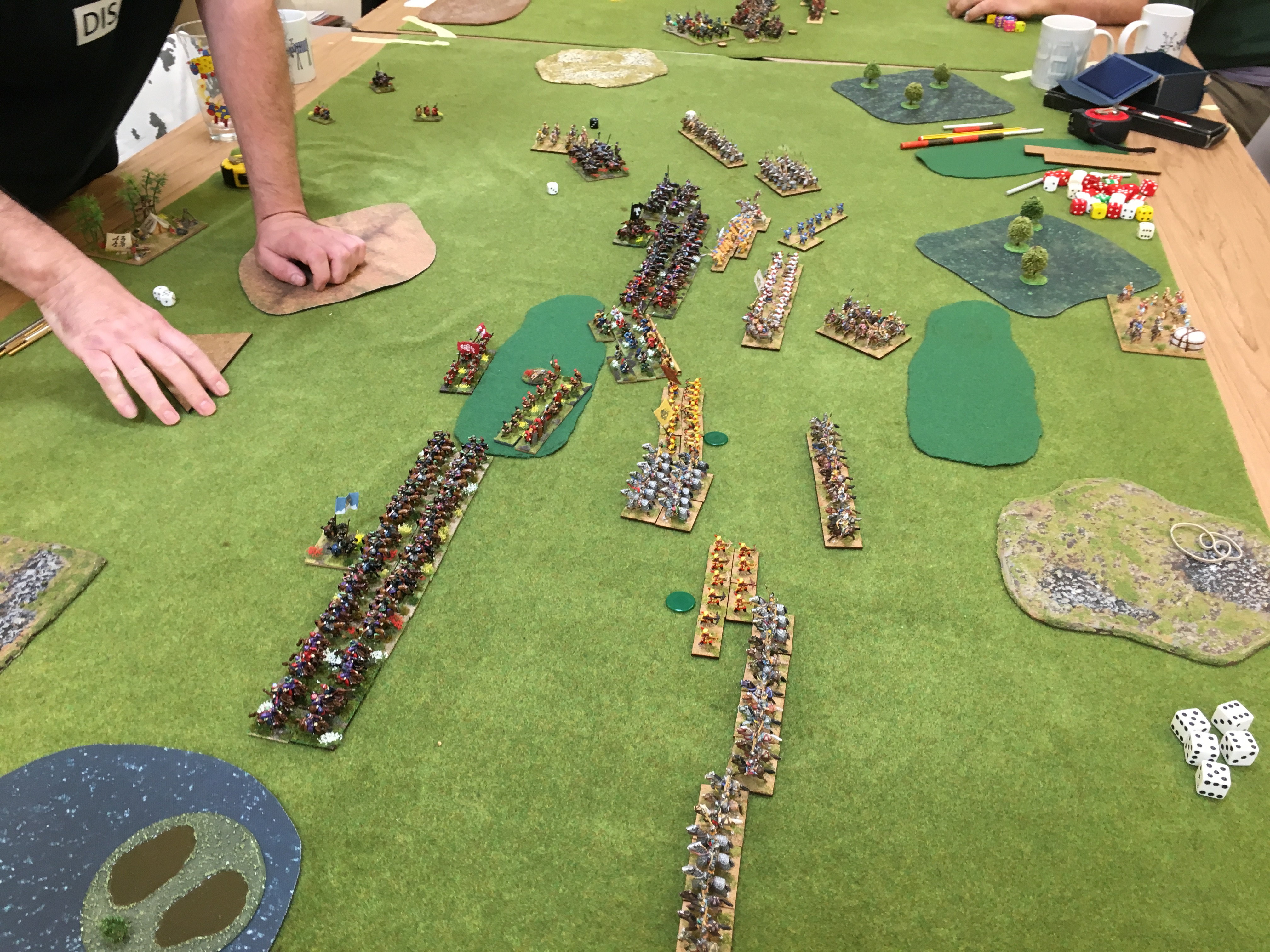 On the far right the LH were now adding their firepower to the Guard’s and the opposing BG was quickly shredded. Another cavalry BG charged and I was lucky in the impact dropping it to disrupted and killing a base. Unfortunately in the centre things had gone pair shaped. The disrupted XB had charged my disrupted MF aided by a +1 from the FC / TC? and snake eyes was enough to rout me. This dropped the Guard next door who would also be routed. And it was a similar story in the centre with the halberdiers overwhelmed. 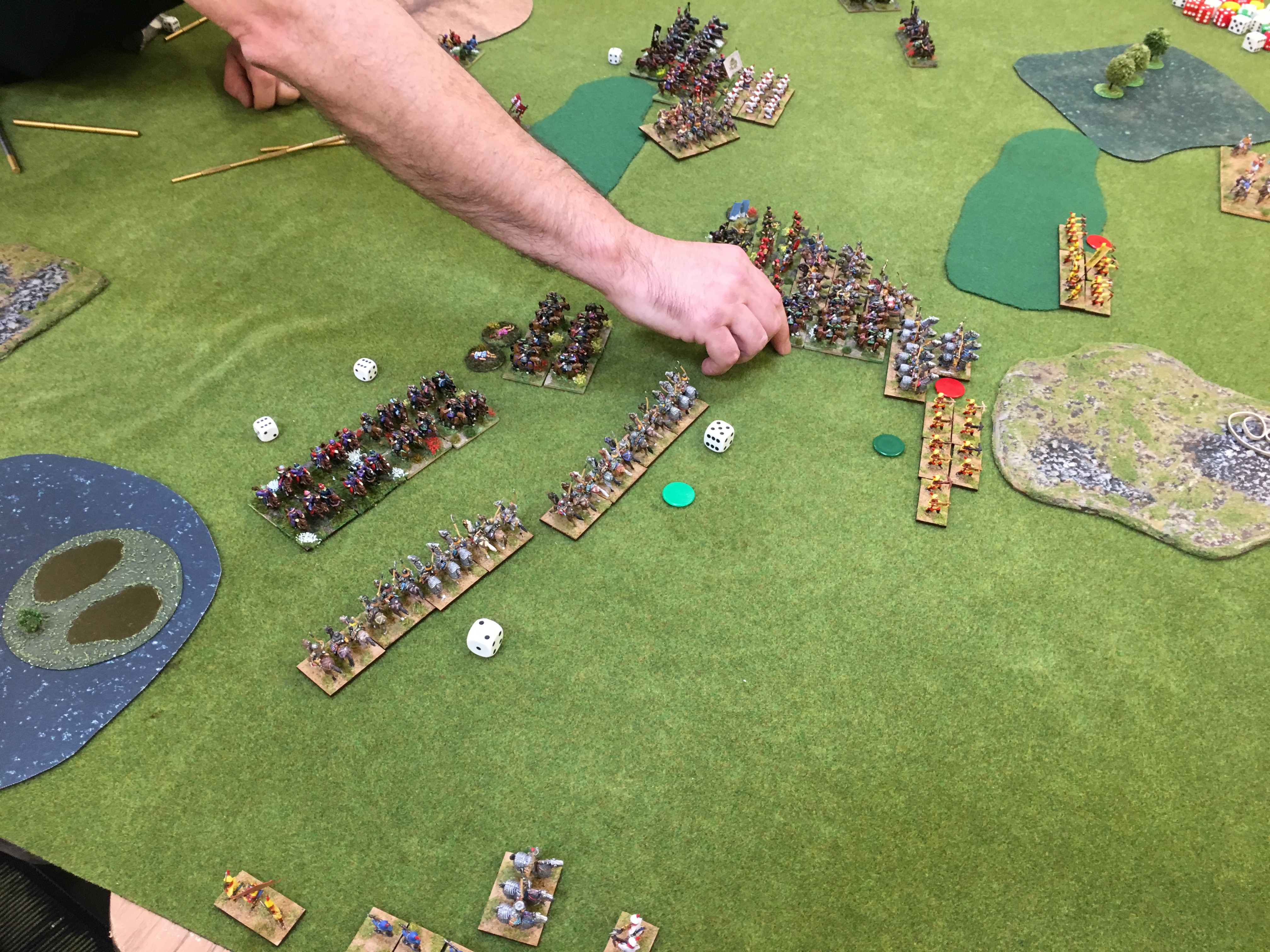 With a bit more time my army would have gone down in defeat but we narrowly held on with the final result being 24-9 to Phil. Phil would go on to win the theme with a massive 145 points.
Pete
Top

Re: Forged in Battle Team Challenge - Game 2 vs Jurchen