We’re back with a new entry of the Astra Exodus dev diaries. This time we’ll be going over Diplomacy and Trade. Most of what we are talking about happens on the audience screen, which can be summoned for any of the factions met at that point in the game.

Once an audience has been setup you will face the leader of the corresponding faction and you will then have the chance to interact with them through diplomatic actions. This can include trading, issuing demands, giving gifts, proposing treaties and of course declaring war. All of these will affect your relations with the faction and trigger a modifier in turn. We’ll talk more about these later.

One of the actions possible here is to propose or break a treaty. There are several treaties available in Astra Exodus. These include: Trade Commission, Research Collaboration, Open Borders, Military Alliance, Peace Agreement and Non-Aggression Pact. The Trade Commission has both factions increase the total commerce they generate by a percentage of what each other generates. Similarly speaking, the Research Collaboration does the same but for research. Open Borders grants rights of passage and refuel for each other’s ships. A Military Alliance is a defensive pact, in which if attacked by a third party, both factions swear to help each other by declaring war against the aggressor. As the name implies, a Peace Agreement marks the end of hostilities between two factions, effectively ending a war. Finally a Non-Aggression Pact is a basic treaty, required for higher tier ones, promising peace between two factions. Breaking it carries a galactic wide diplomatic penalty.

Depending on your military strength, you might be in the position to either issue or receive demands to/from other factions. The terms these demands can include: technologies, systems, credits, tribute, breaking all treaties with a third party, declaration of war against another factions or even agreeing to a truce in a war. If the target faction does not accept the demand then relations will be negatively impacted, with a corresponding modifier. 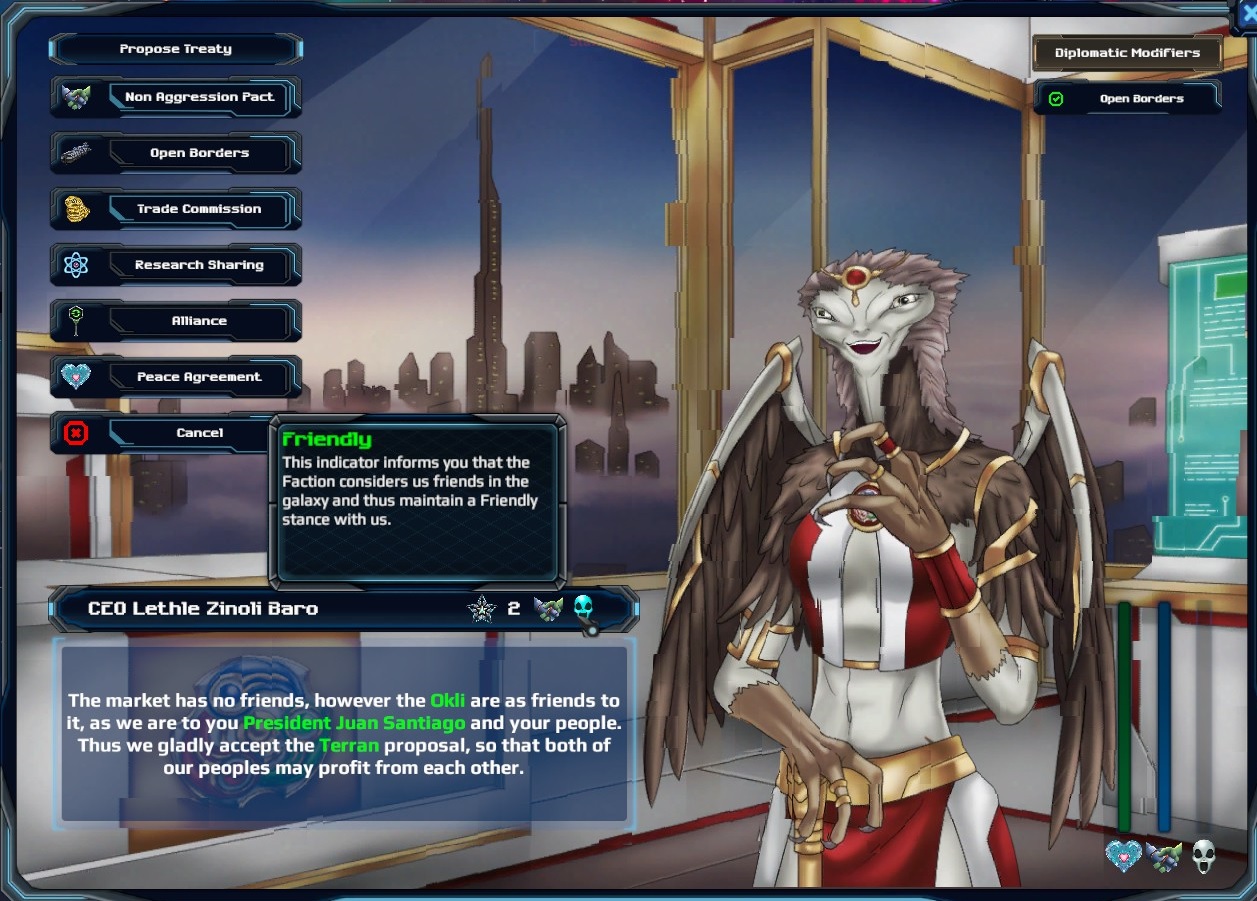 For each faction, the game keeps track of three essential values, relative to all others, to impact the diplomatic relations and interactions between them. They are also directly taken into consideration by the AI in order to make its choices. These values are called Relations, Trust and Threat.

Relations represents the overall sentiment of the faction towards another. It fluctuates mainly with the corresponding faction’s actions. For example, if X allies with Z, which is a sworn enemy of Y, then Y will not have favorable relations with X. In contrast Trust increases slowly with time and can only decrease when a treaty is broken or a promise is not kept. Trust is essential for higher tier treaties and trades (an alliance treaty for example) as the AI not only needs to have high relations with a faction but also needs to trust it. Finally, Threat measures how dangerous a faction is perceived to be by another faction. This is measured in both the relative military might as well as the industrial capacity involved and the perceived willingness to go to war.

Depending on the Relations value is the Attitude the corresponding leader will have with you and your people. They are clearly distinguished from each other, through the leader character visuals and also on how he or she communicates with you during the audience. There are 5 different possible leader attitudes in the game, which from best to worst, are: Friendly, Cordial, Neutral, Hostile, Warring. You can check how they came to be thanks to the relationship modifiers involved with the faction.

Each diplomatic action a player takes (as well as many non diplomatic actions, like for instance the bombardment of an enemy colony) generate a positive or negative Relationship Modifier. These are triggers that either increase or decrease the Relations, Trust and Threat between factions. They also serve as a summary for the human player to understand why an AI “feels” like it does with him or her.

There are many possible relationship modifiers within the game, from a positive one like having the same enemy in a war, to a common negative one like having close borders. Regardless of the source of the modifier and whether if it is positive or negative, they will all expire at some point (all but a few exceptions), either once enough time has passed or because the galactic context has changed. 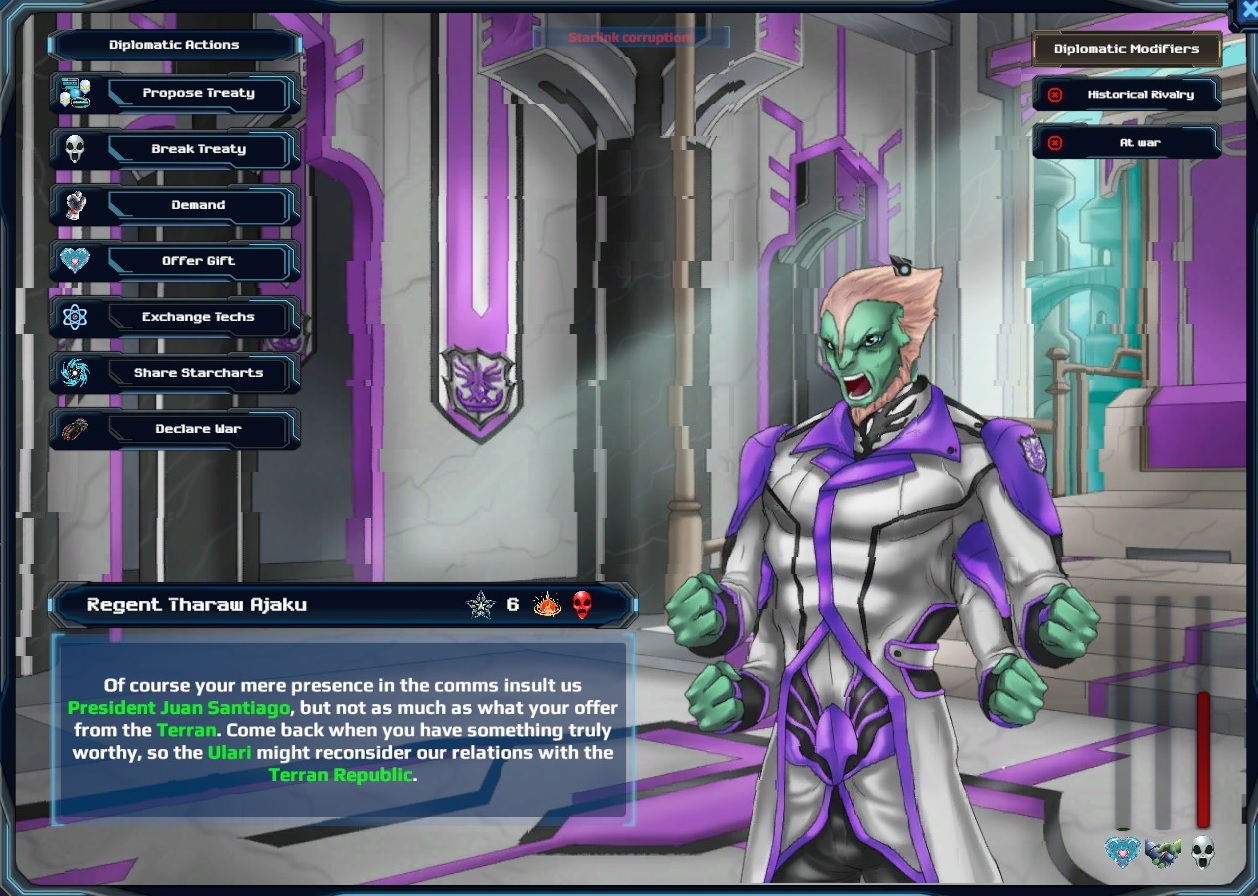 There are several assets which can be gifted in game to other factions in order to increase the relations with them. This can be very important to avoid war, especially if you seek to ally with a powerful faction. These assets include: technologies, credits, tribute (credits per turn) and entire star systems (with any colonies or outposts they include). They obviously affect relations in different amounts, depending on the case.

In contrast trading implies an exchange: giving something but getting something else in return. Most important here is the exchange of technologies, since otherwise a faction can not complete a level of a Research Field, as we have already pointed out in a previous dev diary. However you can also trade star charts with other factions, which helps you to map the galaxy out very quickly.

We will be back next Tuesday with a new Dev diary, this time on the Factions we will encounter in Astra Exodus!
Top
Post Reply
1 post • Page 1 of 1