Happy Easter, generals! As tradition goes, here's your Easter Coupon, that gives you a 30% discount on most of the catalog, including Fantasy General II, Warhammer 40,000: Gladius, Field of Glory: Empires and Panzer Corps Gold.

You can redeem the discount by entering the code HAPPYEASTER30 while checking out. The sale is valid from April 9th to April 14th. 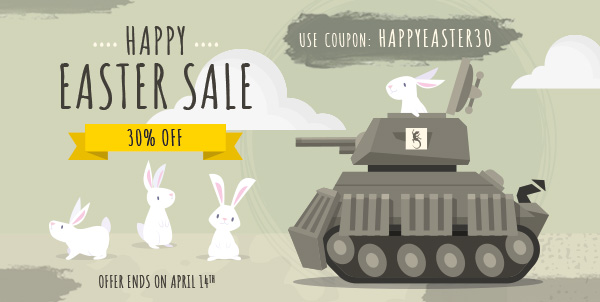 Hmm, I have been looking for an excuse to pick up the Order of Battle Japan stuff

At the moment I'm having a little difficulty connecting for multiplayer though. Probably an issue at my end (dat rural internet connection...) so I'll try again in a while.
Top

Hello! This is not applicable to Panzercorps 2 I take it?
Top

Panzer Corps 2 is not a part of the promotion like "Battlestar Galactica Deadlock: Ghost Fleet Offensive", "Fantasy General II: Onslaught", " Warhammer 40,000 Gladius: T’au" and the pre-order of "Red Steel"
Top

Will there be anything similar for iOS titles?
Top

As far as I know Slitherine isn't doing anything more in the mobile market at the moment (for a number of reasons...https://www.polygon.com/2018/12/6/18128 ... re-removed). Unfortunately, this means that my guess, as a fan (not representing Slitherine), is that existing mobile apps are unlikely to see more promotions or much in the way of updates and support. In some cases the development teams for a few of the mobile titles have moved on. In other cases the game engines on some of the mobile games don't run on newer Apple devices that require 64bit applications only. Sadly it is not a situation where the community or publisher will update these products beyond their current state. So I would expect the support for the iOS stuff to be fairly limited. Note that these are the only iOS titles still available: https://apps.apple.com/us/developer/sli ... d317799940 so anything other then those games on mobile are for all intents and purposes discontinued products that can still run if you have a older iOS device that they are installable on.

I do think there is a market for wargames on mobile devices and not just Apple iOS ones.

It is just that mobile is much a more limited market for these types of games than for regular desktop gamers with added challenges due to app store content policies and on the Android side so many different handsets. There are many other types of games (Angry Birds etc.) that tend to sell better and appeal more to the broader group of consumers buying mobile apps.

Joni Nuutinen has done a lot of stuff on the Android front: https://play.google.com/store/apps/deve ... n&hl=en_GB