Isn't Steve in your team as well?
Top

The Derby chaps should be sending out the joining instructions to players any day now.
http://www.madaxeman.com
Become a fan of Madaxeman on Facebook at Madaxeman.com's Facebook Page.
Top

A few updates before the weekend. Firstly, here are the Runners and Riders for this year's tournament: 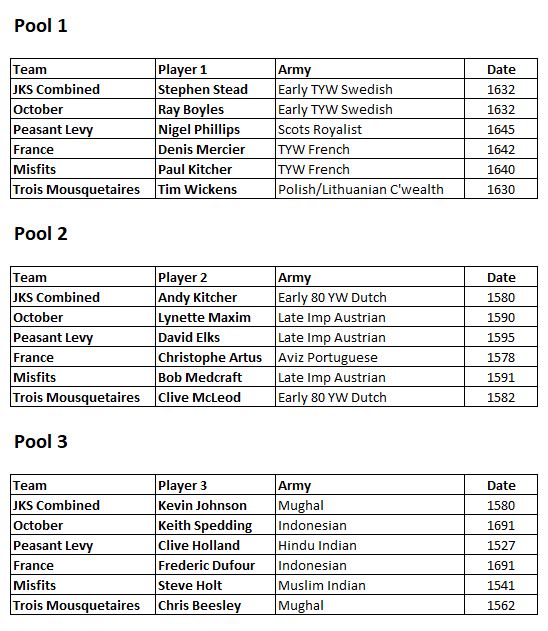 As there are only 6 teams this year, in order to ensure that no teams have to play each other more than once we will use a pre-configured draw. Each team will be allocated a number and will play the other teams according to the following schedule:

Team numbers will be randomly allocated on Saturday. This also means that you will know your schedule for the whole event and may arrange for earlier start times if you wish.

Finally, it has been pointed out that the change in the way that armour works due to the update means that, as written, Warriors/Foot Swordsmen in overlaps would need to re-roll if their opponents have better armour. Previously, they had a flat ++ POA so the armour was irrelevant. I have raised this with the update team for resolution but, as it was an unintentional change, have decided that the fairest thing for Derby is to play this as before i.e. Warriors/Foot Swordsmen fighting as overlaps only will not re-roll if their opponents have better armour.
Top

Many thanks to all of the players for making the event pain free from my point of view. Here are the results from the team competition:

And here are the results from the individual pools:

Kevin, Thanks for organising a great and enjoyable competition. Thanks to my four opponents for enjoyable games.
Hope to see you all next year.