this is to confirm that the event at the Oxford club on 21st October will be a 25mm open FOGR competition.

I can also confirm our plan to offer quarterly events next year covering the main FOGR periods. These will be 15mm events.

Rules: We will be using FOG R rules version 2.

Game Format: There will be 3 games. All rules are standard except see below for terrain, deployment and camps. We plan to use tables roughly 8 feet wide and 4.5 feet deep.

Terrain: To speed up playing we will be using pre-set terrain.

An initiative roll is made, and the winning player then rolls a further D6 and can move any one terrain item as follows: -
1 = up to 3”
2 and 3 = up to 6”
4 = up to 9”
5 = up to 12” or pivot
6 = remove the terrain
The other player than rolls a D6 as above to move any one other terrain item.
Then the normal pre-game initiative will take. The player winning the initiative may either choose to move first or select which side of the table they want to play from.
• Selecting to move first means your opponent gets the choice of table side and moves second.
• Otherwise you choose which side of the table you think is better for you and your opponent moves first.
• The player who moves first also deploys first.

Scoring System:
The normal FOG scoring system will be used for the 20 - 0 component.

Draw:
First round draw will be done by date order to match historical opponents a much as possible - thereafter Swiss chess format.

Competition Rules:
The competition will use the full version 2 rules.

Army lists must specify the number and size of battle groups and their order of march for deployment, and the number and type of commanders chosen. Once an army list has been submitted it may not be changed or altered other than to correct any errors. Players may only correct their errors by making reasonable changes to their list. It is not allowed to completely re-write the list, and the list checkers decision on this is final.

Any incorrect list discovered after a game has commenced (after set up dice have been rolled) must be corrected prior to deployment if spotted in time, and fully corrected in any case before the next match.
Army lists must be submitted for checking in advance and must be received by the List Checker not later than one week before the event.

Players must fully define their troops as they are placed on table. Figures must provide a reasonably accurate representation of the troops they are trying to represent – they must not look deliberately misleading.
It is hoped that the table size will 8' x 4½’ (but it may be reduced depending on the number of players). Terrain will be based on 25 mm equal to 1 MU (i.e. as in 15mm games)

Camps
Camps will be normal width but half depth.

Movement
Movement will use 40 mm equal to 1 MU.

General Information; Players must be present and ready to start the match at the appointed time (see the timing below). Where a player has a reasonable excuse for arriving late the match start will be delayed by up to 30 minutes. After which time the effected player will be awarded a bye and receive initially 10 points. At the end of the competition this will adjusted to reflect the average number of points they have received in each other round. No player will be awarded more than one bye for any reason. If a player resigns from a game at any stage after the first set up dice have been rolled their opponents will be awarded maximum points, and they will be awarded 0 points.

When time is called, play will continue until the end of the current phase.

Time will be called after 2½ hours plus a 1 – 15 minute random factor. The random factor will be
determined by the umpire prior to the start of the round, and will not be revealed until time is called.
Players may always commence games earlier than the stated time by mutual consent.

A limited number of spare 25 mm figures are available to borrow for players without 25 mm armies.
However, those supplying the spare figures request as much notice as possible to find the figures
and ensure they are correctly based.

Admission to the tournament is at the sole discretion of the organisers and their decision on all
matters is final. An application to enter denotes acceptance of these rules.

Cost: The cost of entering the competition is £15 – cheques made payable to Oxford Wargames
Society or cash on the day.

Closing date: - Entries to be received by Sunday 7th October 2018 (There are limited places available for this competition, so entry will be on a first served basis.)
Any queries and entries are to be sent to: -

I missed a point in the comp rules.

Although we are using 15mm distances for deployment into the table from the baseline we feel that we should use 25mm deployment for the flank sector size - hence 16" pro rata. Grateful if everyone would note this change.

Would love to come to this but am away that weekend.

We now have 7 for this event:-

We have room for one more and it would be great to even up numbers. If there were 3 more I think we could cope too.

So, Any more takers?
Tom
Top

all, we are looking forward yo seeing you on Sunday.

Draw for the first round is as follows

As we have an odd number the lowest placed Oxford player will take a bye each round. Bye gets 12 points. Bye will go to lowest Oxford player except random allocation of first round (done by Jane, after me allocating numbers to the Oxford players, to see who takes the first bye she chose number 3)

That means Jerry after round one will have more points than Paddy.
Top

Hope everyone has fun at the 25mm comp, would have liked to have been there.
Top

I reckon a good time was had by all and we enjoyed having visitors from outside the immediate Oxford area.

All agreed it would be a good plan to do this FOGR 25mm again next year.

Scores were as follows:

Congratulations to Keith and Tim

An excellent day's gaming - very good to have a chance to blow the rust off of my figures, and my recollections of how the rules are supposed to work too!

(..still not convinced that the commanded shot rules should have ended up meaning that units can end up with an advantage in circumstances when they would otherwise be equal in melee though!) 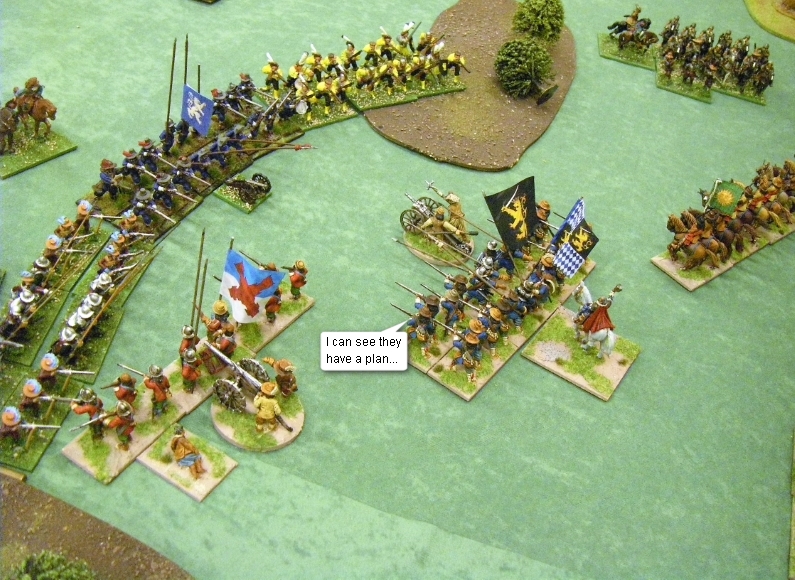