I see that disbanding transports doesn't give any prestige --- doing it in the upgrading, selecting No Transport.
I'd like to do that when upgrading Arty into SPGs; or when one INF gets a movement Hero.
Am I doing something wrong?

Another issue I've found is that when upgrading an infantry which has a transport, the transport will disappear, without seeing some prestige in compensation.
This made me keeping a Gebirsjaeger from the upgrading into '43 Gj. Preferring a less powerful unit, yet more expensive, with its 200 prestige halftracks -- rather than the '43Gj on feet.
Top

MaxF wrote: Another issue I've found is that when upgrading an infantry which has a transport, the transport will disappear, without seeing some prestige in compensation.
This made me keeping a Gebirsjaeger from the upgrading into '43 Gj. Preferring a less powerful unit, yet more expensive, with its 200 prestige halftracks -- rather than the '43Gj on feet.

In general transport can not be disbanded. The only way to get prestige from a transport is to disband the whole unit.

For example if a paratrooper is given a truck, placed on an airfield, when it 'embarks' on an airplane, you are asked if you want to discard transport. If one has gliders that can carry the truck, it may carry the truck, but I have not tried that.

As far as transport upgrades go, the upgrades are out of series, so full price for the new transport.

If one modifies the equip file to make various transports as part of a series one may get prestige discounts for upgrades, I don't know of anyone having tried this.
There comes a time on every project when it is time to shoot the engineer and ship the damn thing.
Top

Tried to give transport to Wermacht Inf, upgraded to PGrenadier and it keeps the transport.
INF units will keep the transport even when changing from GJ to Wercmacht Inf, or any other Inf type.

SE GJaeger upgrading to '43 GJaeger will lose the transport. Then if you buy a new transport, the unit will keep it switching between '39 and '43 GJ, or switching between different unit types.
So only the SE original transport will disappear after the upgrade.

AT 7,5cm Pak40 with transport upgraded to 88 Pak loses transport, because it must have the Sdkfz7.
Top

Personally, i feel like transports are not portrayed that well... they are extremely vulnerable, while their movement is not that great, considering they can only fight every other turn if moved at max distance.. infantry units with movement heroes can sometimes have more useful mobility to a unit with transport attached..

Overall, halftracks should be a lot more survivable against infantry, to some degree these should be considered "infantry fighting vehicles" as normal doctrine called for these vehicles to provide support to infantry platoon with integral machineguns, and sometimes even with own antitank guns (german halftracks specifically). Armor wise, they were not that far off from early war light tanks like PzI, with exception that they always had additional protection thanks to own infantry that could dismount instantly. This should be a lot bigger advantage in early war, when infantry did not have effective antitank weapons. Fighting other infantry in open terrain should be more effective with the halftracks, than without them.

Normal Trucks should also give higher mobility.. movement 8 is too low, considering unit will fight next turn, where tanks can move 10 hexes in 2 turns, so your infantry in trucks will always be "behind".. I think movement 9-10 would be better. But to counterbalance both normal trucks and halftracks, their price should be a lot higher.. Not that many German infantry divisions actually used Halftracks, and most of PanzerGrenadier divisions were using ordinary trucks whole time.. This should be modeled by greatly increasing the price for Halftracks and trucks.

Technically, i think halftracks should provide some additional bonuses to units they are attached to, as they are supposed to support them in fight..

@JaM2013 I do agree with you. They should have more attack and defense, plus a bonus when dismounted.
But I don't think that they are cheap: Truck costs 50, and Sdkfz 251 costs 100; Sdkfz 250 costs 200 (More than the Inf unit itself !)
My concerns infact were about losing the 200 prestige of the halftrack Sdkfz 250 of a SE GaebirsJaeger when upgrading to '43 GJ.

price difference between 251 and 250 should be smaller, i'd say if 250 costs 200, then 251 should cost 175 at least.. that would make it costly and rare.. trucks could go up to 100, so again, player would only use them for some units, not all of them. disappearance of halftrack is most likely a bug in equipment file..

overall, if you compare M3 with 251, M3 Halftrack was lighter armored (6-12mm vs 6-14.5mm), but was faster (72kph vs 52.5kph) and had better carrying capacity 12 vs 10, and of course carried heavier machinegun thanks to M2HB + .30cal vs 2xMG34 or 42 with 251.
and regarding armor, 250 had side armor composed of 8mm plate V shaped, therefore with much better protection (12mm RHAe), where M3 Halftrack had it 6-8mm and therefore it was possible to penetrate it with non AP rifle rounds (they were able to penetrate around 8mm) So, 251 was more resistant in normal shootouts, as it provided protection against machinegun fire a lot better than M3

Are you kidding me?

I still would give an advantage to German halftracks, while Americans with the .50 cal must have an anti AA firepower; more Hard Attack and less Ground Defense.
Top

you probably misunderstood what i wrote - M2HB was an advantage for M3 Halftrack over 251, yet armor protection was better for 251 due to sloped sides... M3 had flat sides that could be penetrated by standard rifle ammunition..

and btw MG34/42 were not SMG (sub-machine gun) but GPMG - they filled role of LMG,MMG or even HMG, based on how they were fitted - on bipod or tripod. plus, they had swap-able barrels and high rate of fire (900-1000 rpm).. besides, German army uses them even today (MG3 is practically MG42 re-barreled for 7.62 NATO)

I like creative views on transports, such as some units switching between transport and dismounted with halftrack fire support rather than unit or unit in halftrack.
This should probably be used sparingly to avoid breaking the game but for example SE Grenadiers or some other SE units would be a perfect case - not too common and with reasonable historic justification.

I have tried giving transports limited passive attacks to allow for the transported units being able to put up some kind of limited defence, while preventing them being used in attack as makeshift light tanks (apparently this was why some French armoured carriers were not armed initially). Higher passive attacks make reasonable historic sense for units like the French Dragons portees where their Laffly trucks had mounts for the section LMGs for AA or ground defence.

Switchable AT guns that switch between portee mount (french 25mm or UK 2 pounder) and ground deployed where they have better defence but reduced spotting (as they are lower down). That seems to work quite well.

I'd agree that tarnsport isn't that well handled since you should really have some ability to switch transport from one unit to another between scenarios.
Top

Yes, I misunderstood that. It was strange indeed that could mount 2x M2HB.
Top 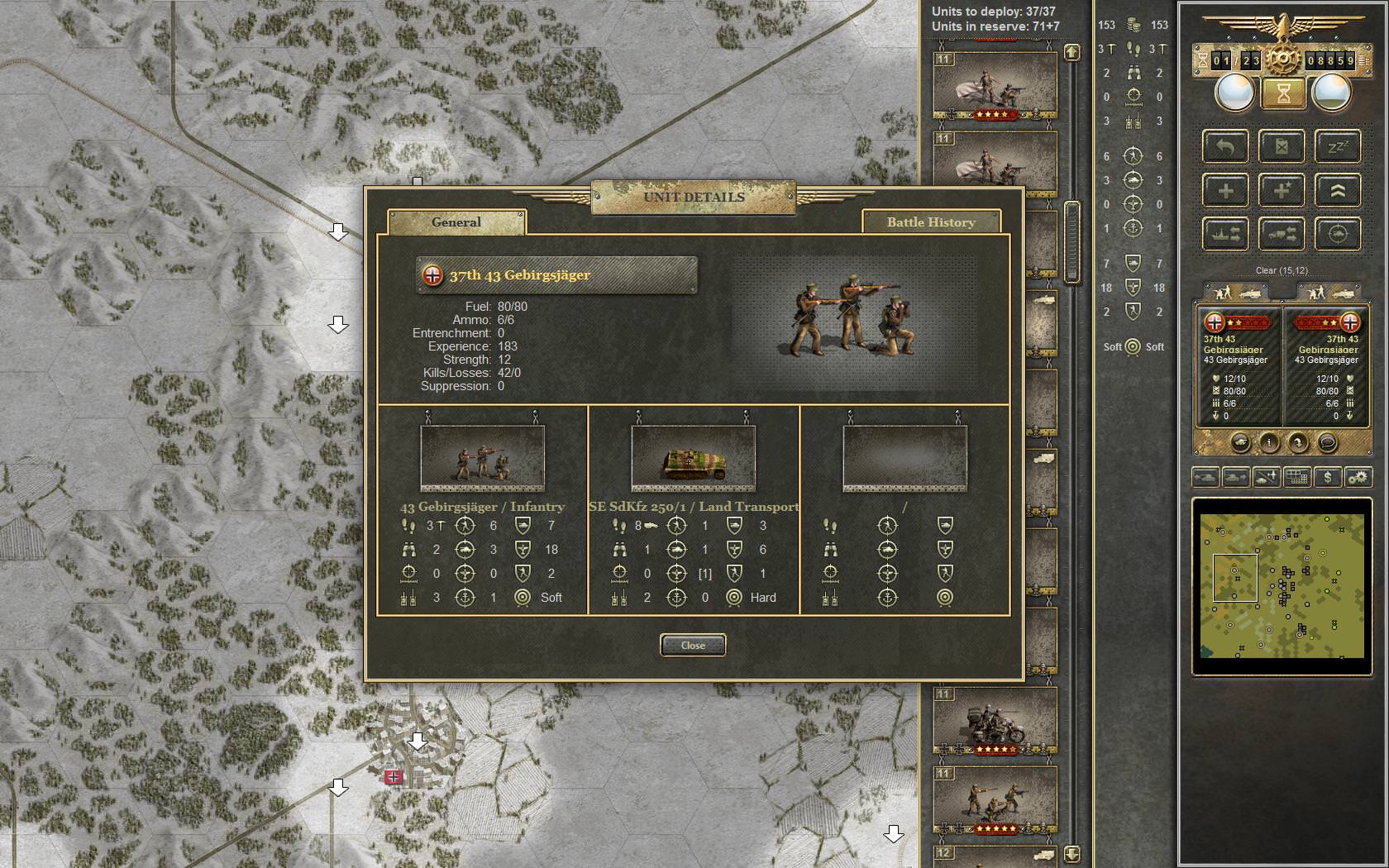 I see that Bonus Gebirge ( non-SE) has SE Transport:
the unit has the normal icon / uniform's colors
while the halftrack has the mimetic SE

does that mean that the transport isn't counted in the Soft Cap ?
Top

goose_2
Tournament Organizer of the Year 2017

I am not sure, I suggest an experiment. Save your game during deployment. Deploy your troops.
Get them to where it is 99% or something like that on Soft cap. Deploy Bruno Sutkus...see what deployment is, then upgrade him to a 43 Gebirsjaeger with the same type of transport and see if soft cap is dif...than report back here

I don't know how to see the Soft Cap... I believe you can do the experiment too : )
Top

Thank You, I didn't know it!
I see 100% in any saved game I loaded to look at it...
Tried to deploy maximum expensive core army and finally went under, to 88%
Deploying Alterberger bonus Gebirge WITH transport the Soft Cap = 81
Without transport = 84

So the transport isn't SE...

News is that I have always deployed a very inexpensive core army and I can finally deploy my 3 Tigers then... or overstrenght my arties which are 12 or 13

And also use more transports
Top

Overstrength is surprisingly expensive, especially for units with halftracks, and above 11 strength is best used sparingly. .
If you take transport away from infantry with move heroes, you can save a fortune over a campaign for only a minor effect on ability to get somewhere useful. In snow and mud you might even cover more distance as you won't have to refuel every few turns. The saving on transport allows you to overstrength and use elite replacements during scenarios.

Note that I don't use soft cap, though I often play at reduced prestige (usually 80 or 90%).
Top

goose_2
Tournament Organizer of the Year 2017

captainjack wrote:Overstrength is surprisingly expensive, especially for units with halftracks, and above 11 strength is best used sparingly. .
If you take transport away from infantry with move heroes, you can save a fortune over a campaign for only a minor effect on ability to get somewhere useful. In snow and mud you might even cover more distance as you won't have to refuel every few turns. The saving on transport allows you to overstrength and use elite replacements during scenarios.

Note that I don't use soft cap, though I often play at reduced prestige (usually 80 or 90%).