After action reports for Commander The Great War

I got a post from a new player who had troubles defending vs. CP AI with the Schlieffen plan in my PotzBlitz mod for CTGW.
Here's a turn by turn AAR of how to defend until end of turn 9 when the front is stabilized.

No reloads were used.

Start of turn 3: CP has moved 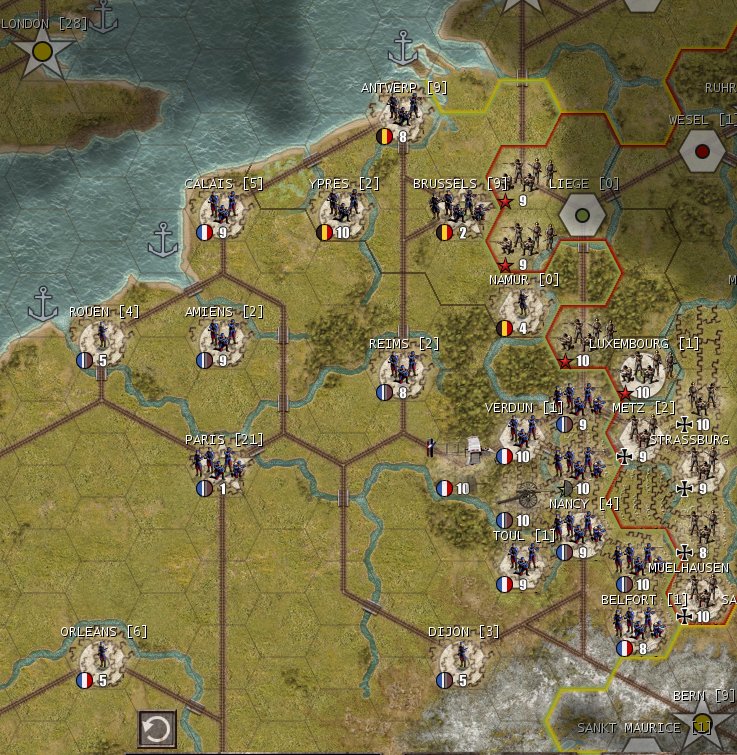 This is usually a bad start because the Reserve Corps at Reims suffers from loss of movement because of the German surprise, else we could have moved it to Namur after having moved out the Belgian Garrison to soak up a German attack. A Reserve Corps at Namur will hold out much longer than a Garrison.
Britain DOW is delayed because "Guarantee to Belgium" was not played and Germany did not demand for Right of Passage through Belgium.
Entente events played until now: Full Russian Mobilization, British Royal Navy Review

End of turn 3: Entente has moved 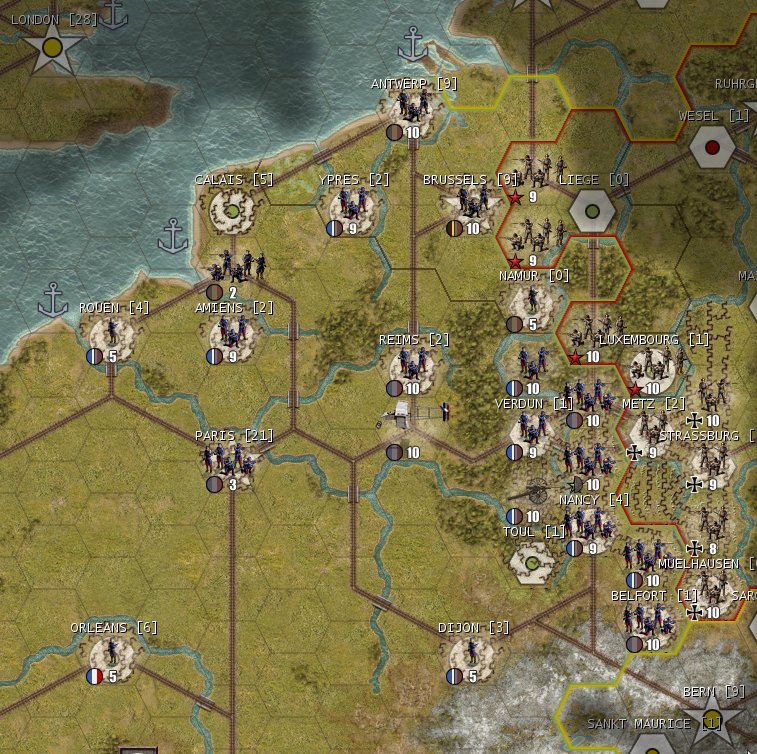 Rail-moved the Belgian Army Corps to safety to fight another day.
Repaired a few units that started understrength.
Built a French Reserve Corps and a second one using PP from Britain sent via Transfer-option in Diplo scree.
Moved the Ypres Belgian Reserve Corps to Brussels as a pawn sacrifice to slow down the Germans and the French Reserve Corps to Ypres.
Events played: Russian Military Aid to Serbia, Italy declares Neutrality, French Army of Africa (got bombed by Goeben Battlecruiser)


Start of turn 4: CP has moved 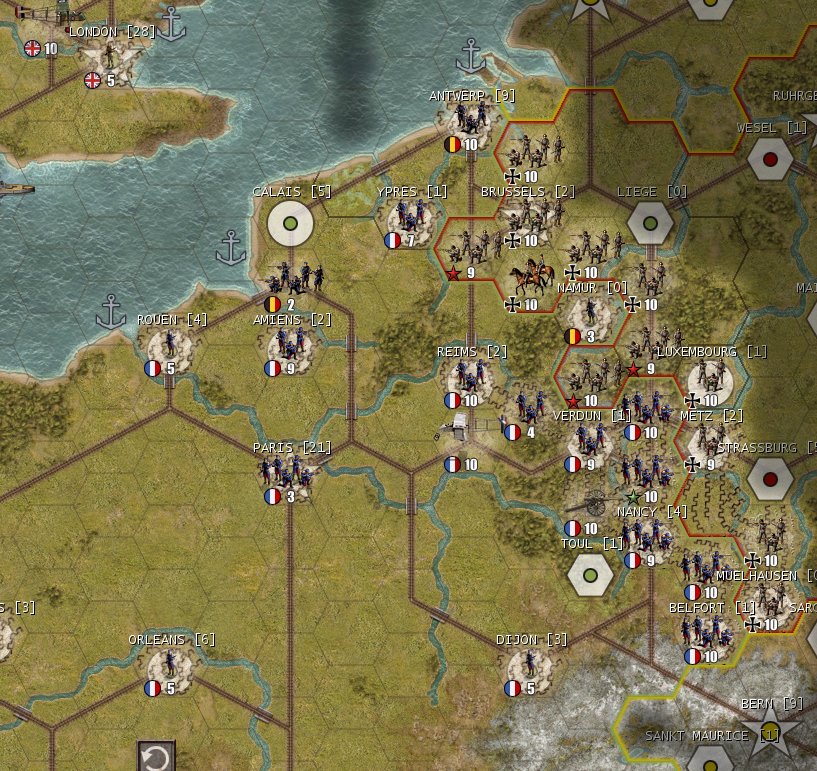 End of Turn 4: Entente has moved 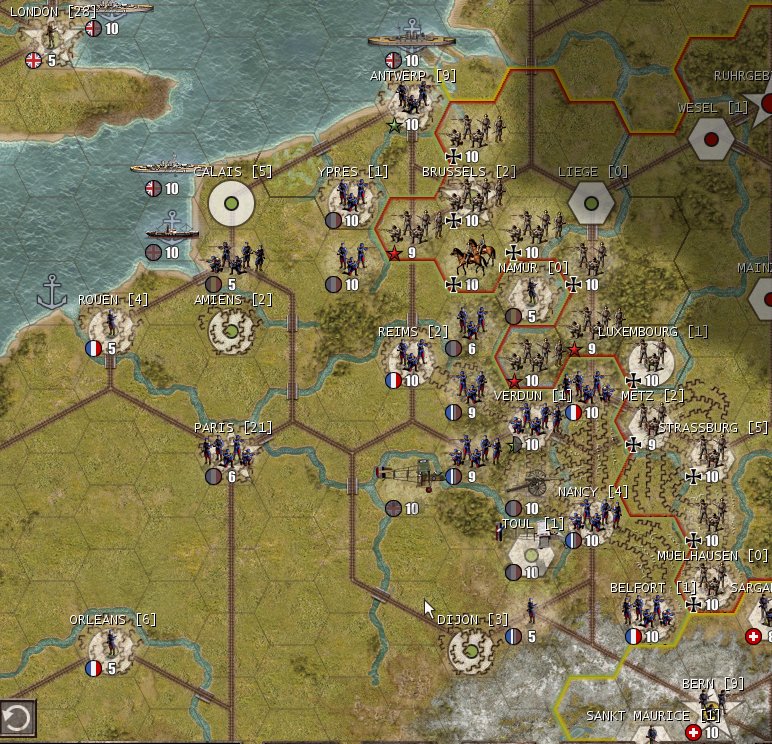 Start of turn 5: CP has moved 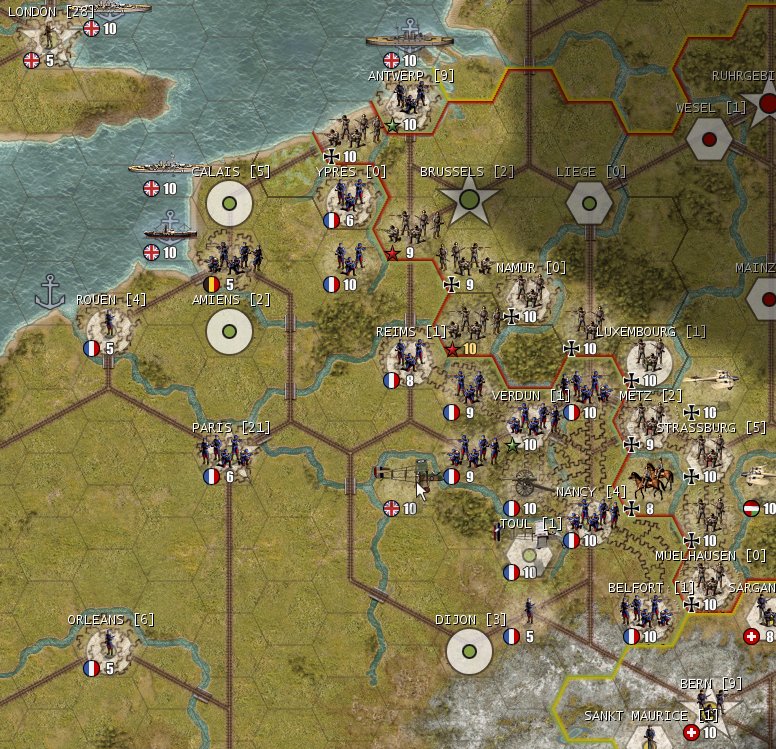 End of turn 5: Entente has moved 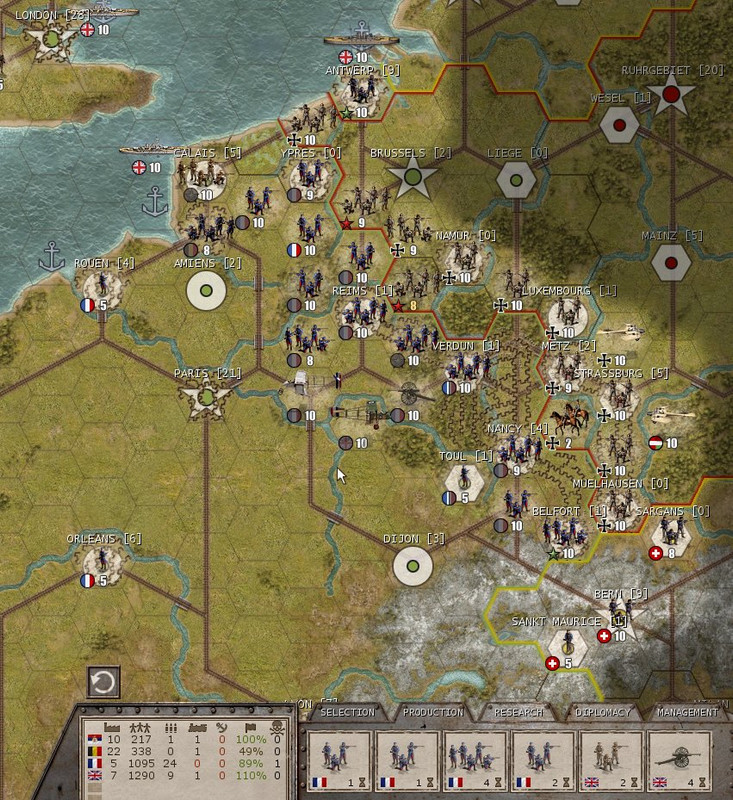 Brits have landed.
Belgium Army Corps almost ready for further use.
Moved 3 Army Corps commanded by Lanrezac including the almost repaired Corps from Paris to block further German advance after they chewed through the screen of Reserve Corps.
Joffre got unlocked which means that "Attaque a outrance" is imminent!
Still attacked the German cavalry at Nancy because of favorable combat odds and got lucky not triggering Attaque a outrance on my turn.
Moved Reserve Corps to free Army Corps at Belfort.
Britain built Reserve Corps and Artillery.
Events played: British Blockade, Anglo-Japanese Alliance


Start of turn 6: CP has moved 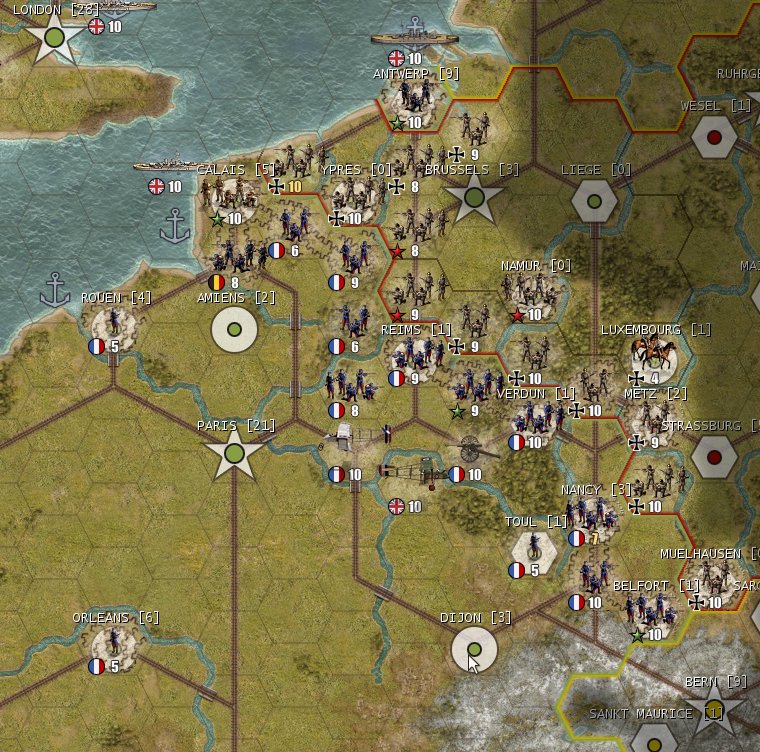 A few French units have suffered damage and efficiency loss from "Attaque a Outrance" but nothing too bad since no unit was bordering on too many enemy units and the one that did would have been killed anyway.

End of Turn 6: Entente has moved: 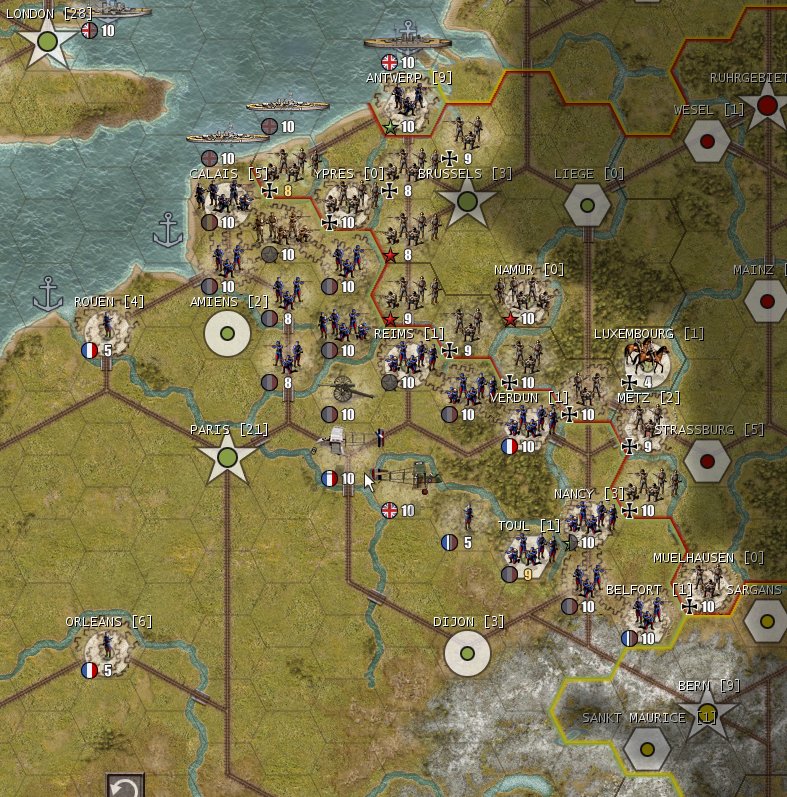 Start of turn 7: CP has moved 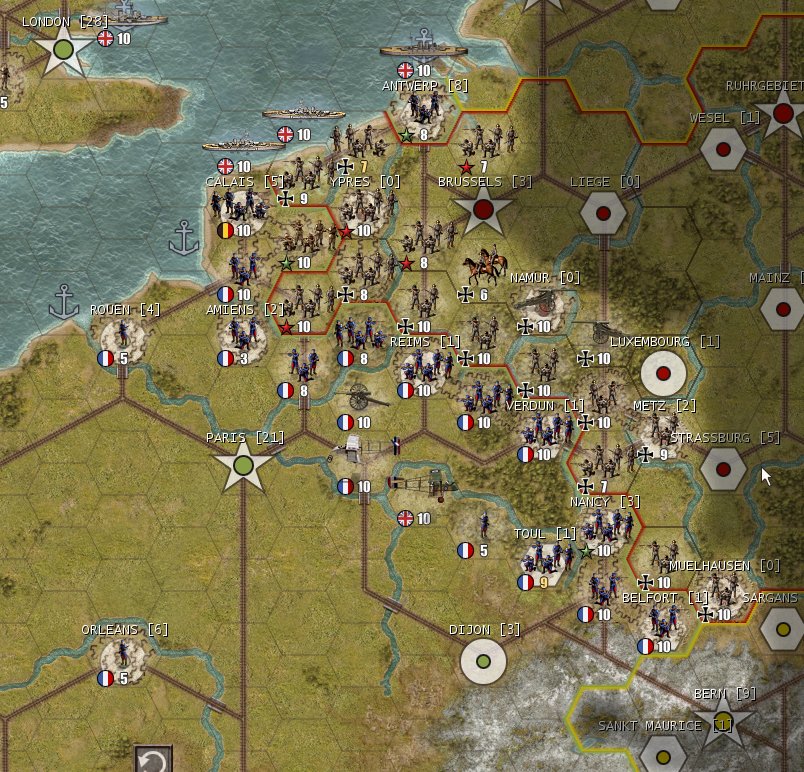 End of Turn 7: Entente has moved: 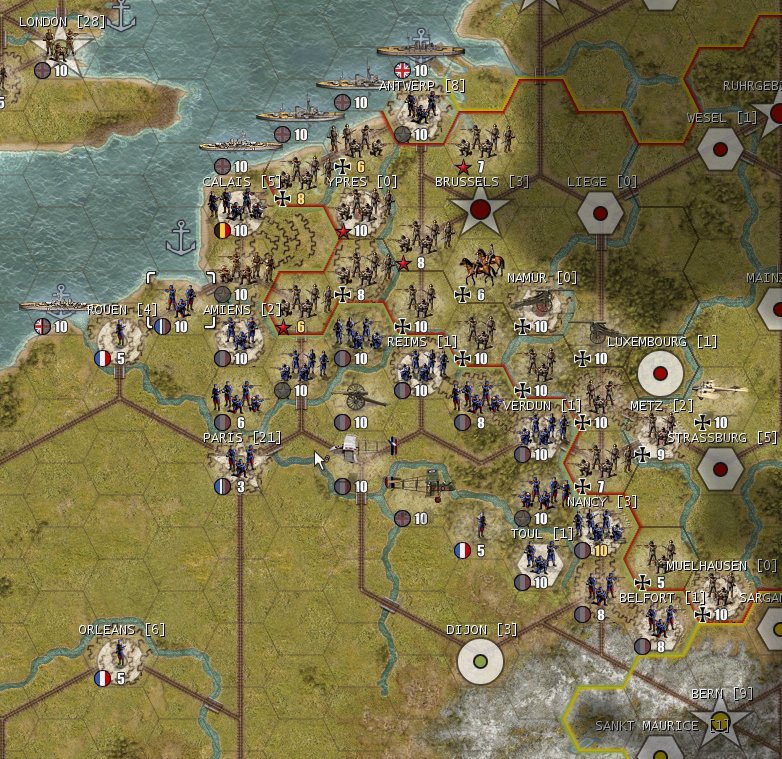 Start of Turn 8: CP has moved: 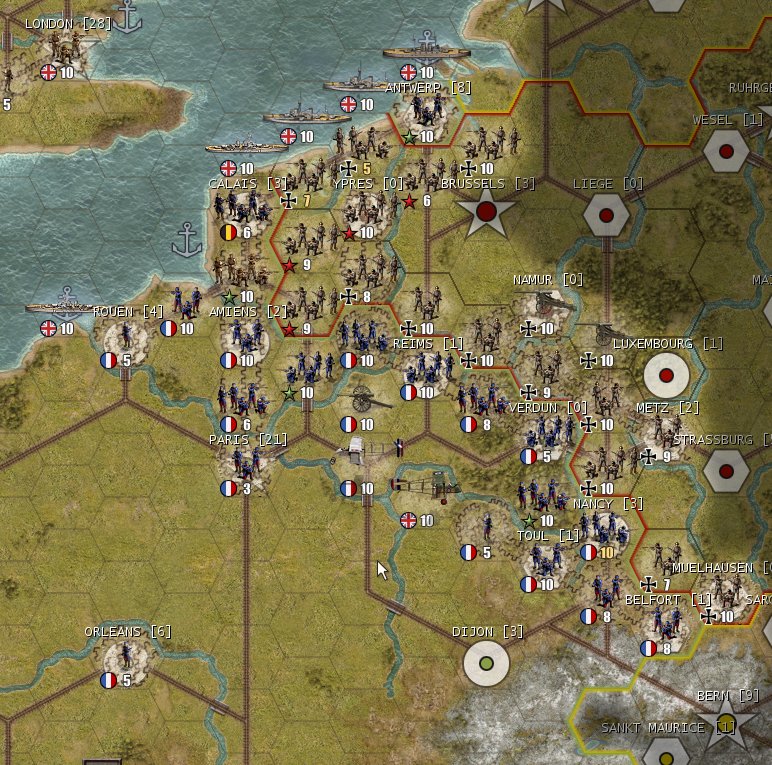 Belgian Army Corps badly mauled, must be moved out by rail.
Verdun got slammed by Artillery.

End of Turn 8: Entente has moved 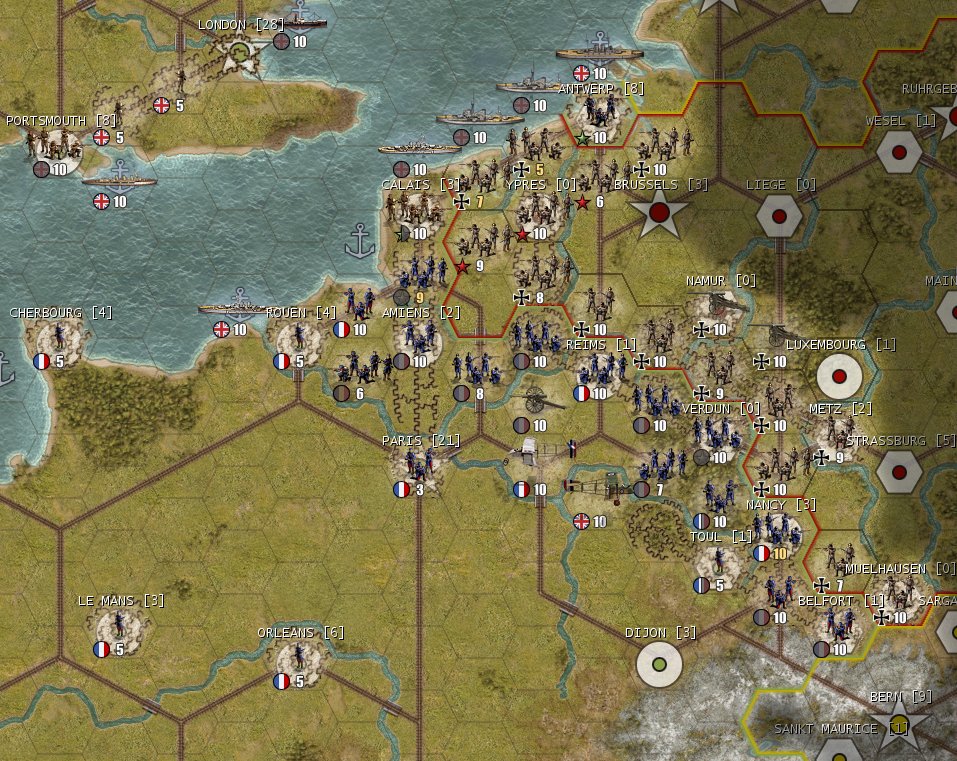 Start of Turn 9: CP has moved 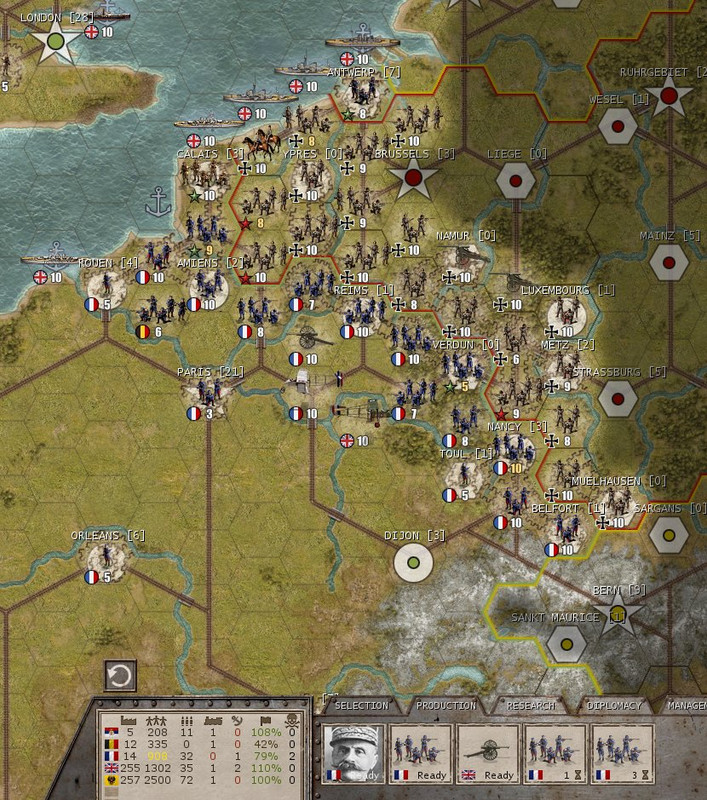 End of Turn 9: Entente has moved 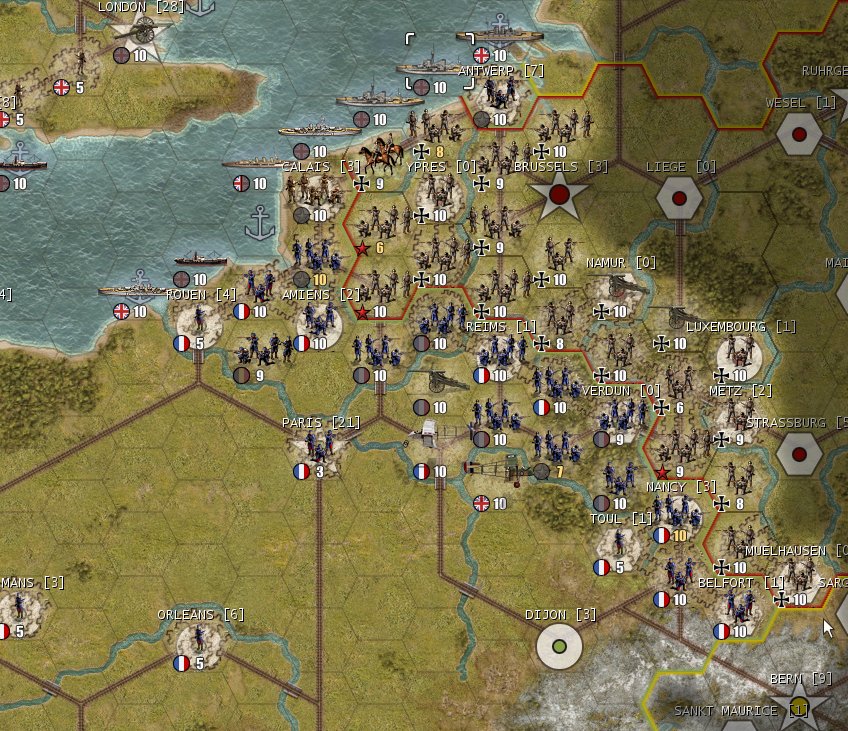 Re: Defending France vs AI Schlieffen

Hi.
This is only indirectly related to your topic but I cannot find anyone to answer this question: Why can't I embark troops from England during the winter and up to April ? The anchor sign never illuminates. Is it because of bad weather and/or rough seas ?
Top

Re: Defending France vs AI Schlieffen

Dear Robotron
Thank you very much for your quick reply, that was most helpful. Am I correct in thinking that you can only embark troops from England every fourth turn ?
Is that right ?
If so, is there anyway of overriding it ? Please excuse all these questions but I have only just started playing this game and I find the PDF Manual lacking in detail.
Cheers,
bloodnok
Top

Only 1 unit can be embarked per Transport Capacity point (TC).
Build more TC if you want to transport more troops at the same time.

You might want to re-read the following pages in the manual:
Transport Capacity: page 25/26
Embarking/disembarking: page 32

Thanks again for your help, Robotron. Will do.
Top

Robotron wrote: ↑
Sun Sep 20, 2020 6:24 pm
Only 1 unit can be embarked per Transport Capacity point (TC).
Build more TC if you want to transport more troops at the same time.

You might want to re-read the following pages in the manual:
Transport Capacity: page 25/26
Embarking/disembarking: page 32

What's the price of a new transport in your mod? Always felt in original game that railroads and transports were priced to never, or near impossible to achieve increases.
Top