100 years ago, the First World War was ended, by the signatures of the Armistice of Combiegne, on November 11, 1918. It was on a path of one of the first steps (perhaps even the first ...) in history, the direct one led in the Second World War...

Five years ago, in mid December 2013 LoV Classic came out...

Reasons enough to give LoV this year an anniversary upgrade ...

LoV REDUX is available at streitmacht.com...

and compatible with all versions of LOV REDUX)


Note: It is possible that you must first register / Sign in at Streitmacht.com to download the mod ...

- After clicking on "register", scroll down and press the yellow text button with "Ich bin mit diesen Bedingungen einverstanden" ("I agree this terms")
- On the next page please set the language ("Sprache": [Deutsch]) on [British English]
- Afterwards the registration has been changed to English language

Early 2017: The Ultimate project was shut down. At this time, Peter came to us ... He showed a serious interest to work up, adapt and publish the old Ultimate version.

Not an easy task ... In the Ultimate scenarios, there were many copyright-critical units. To be made appropriate changes and compromises. Nevertheless, after more than a year of renewed development, we are very satisfied with the current result and state of affairs!

The original plan of the development team was that LoV Ultimate - similar to the (official) Grand Campaign - is presented campaign after campaign ... With about 10-15 maps per DLC, LoV Ultimate should continue to grow, from DLC to DLC ... The first DLC was done, except for minor finishes, and the second was already in planning.

The first DLC covers the time between 1935 and 1938. This DLC shows the player the newly added features in LoV Ultimate in a tutorial. Afterwards can be played with the Legion Condor and made a trip to Spain. Or one deals with the (fictional) military conflict with Czechoslovakia ... The second DLC thought of the Polish campaign (from 1939) ...

The second DLC never got beyond the planning stage. Our Redux edition includes only the first DLC in an adapted version!

An integral part of the Ultimate should be, in addition to great maps from the map design guru Nikivdd, a redesigned GUI (graphical user interface) ... Therefore, there was also an intensive work-up of the GUI. The wheel was not reinvented ... The look, which should be known through various screenshots for years, has been retained. Also, no significant changes were made in the functionality of the (G) UI ...

So you get a small impression of the current state of things, should not be missing at this point some pictures from the Redux version ...
Top 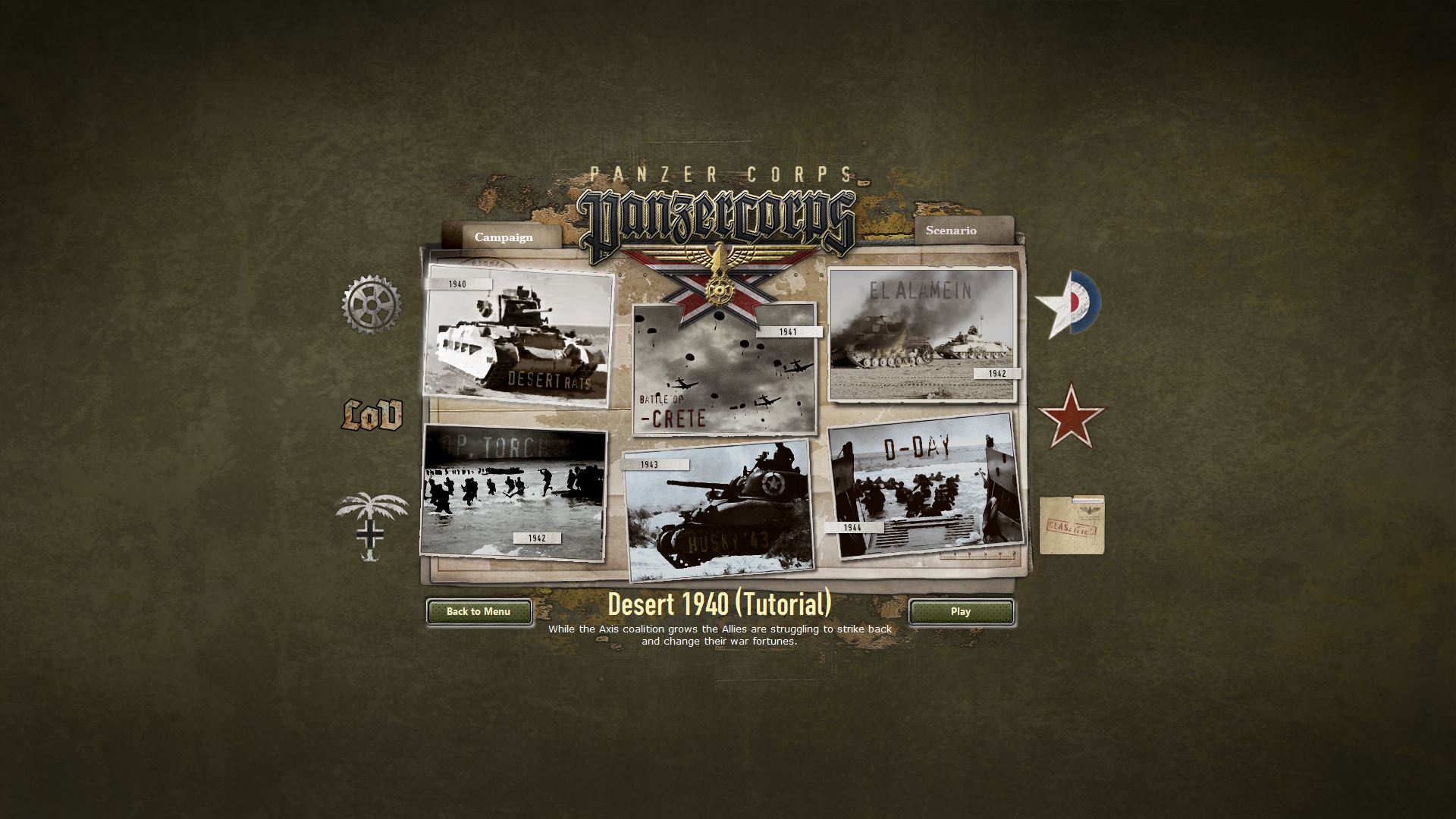 Depending on the currently active add-on, which remain untouched, LoV can be started via the corresponding button on the page. Unfortunately, the official Wehrmacht campaign had to leave. 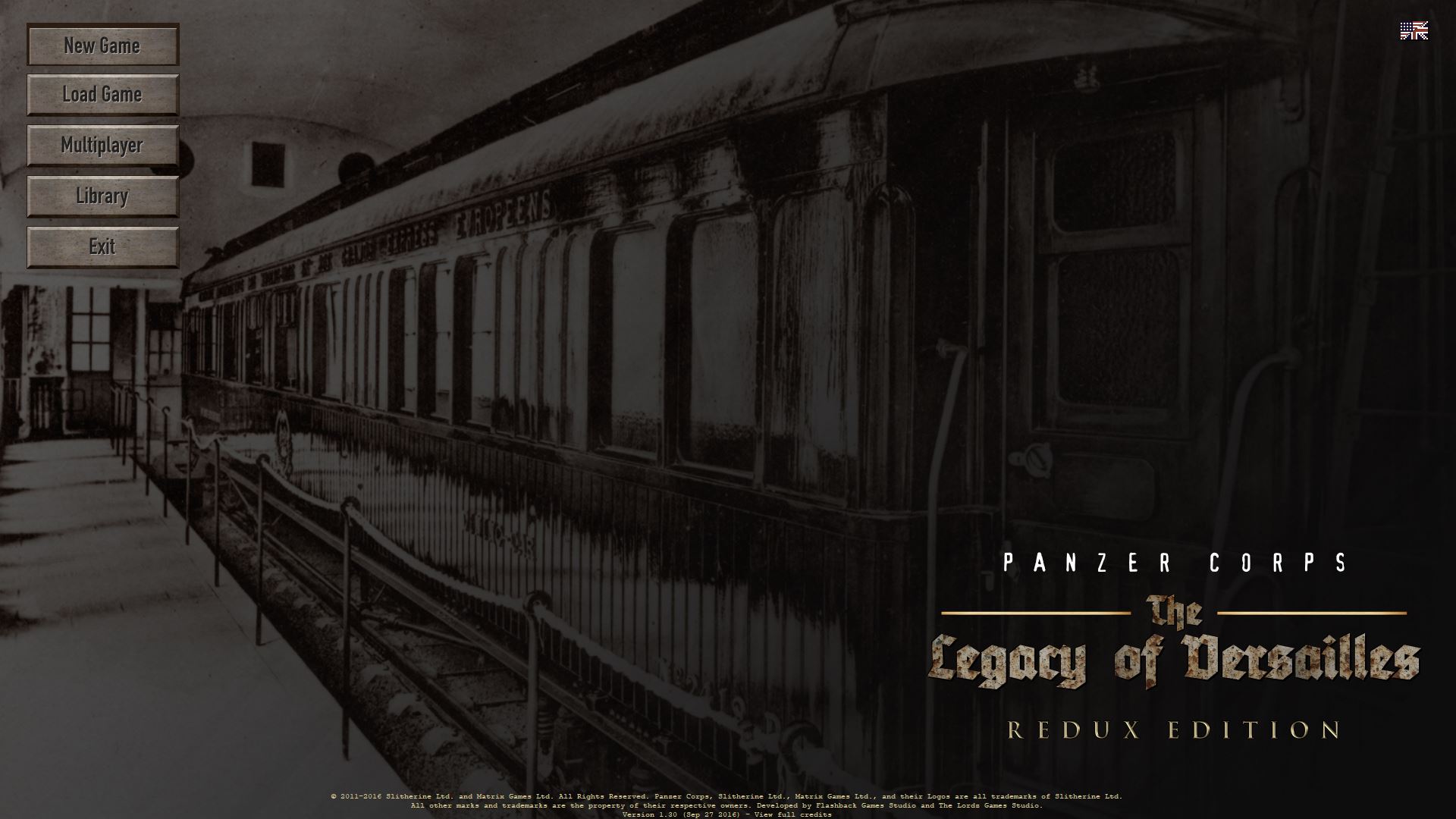 After pressing the LoV button you get to the start screen, which shows, in addition to the Compiègne Wagon, the usual controls ... just a little differently arranged ... The game-relevant controls are located on the top left, the localization control top right ... 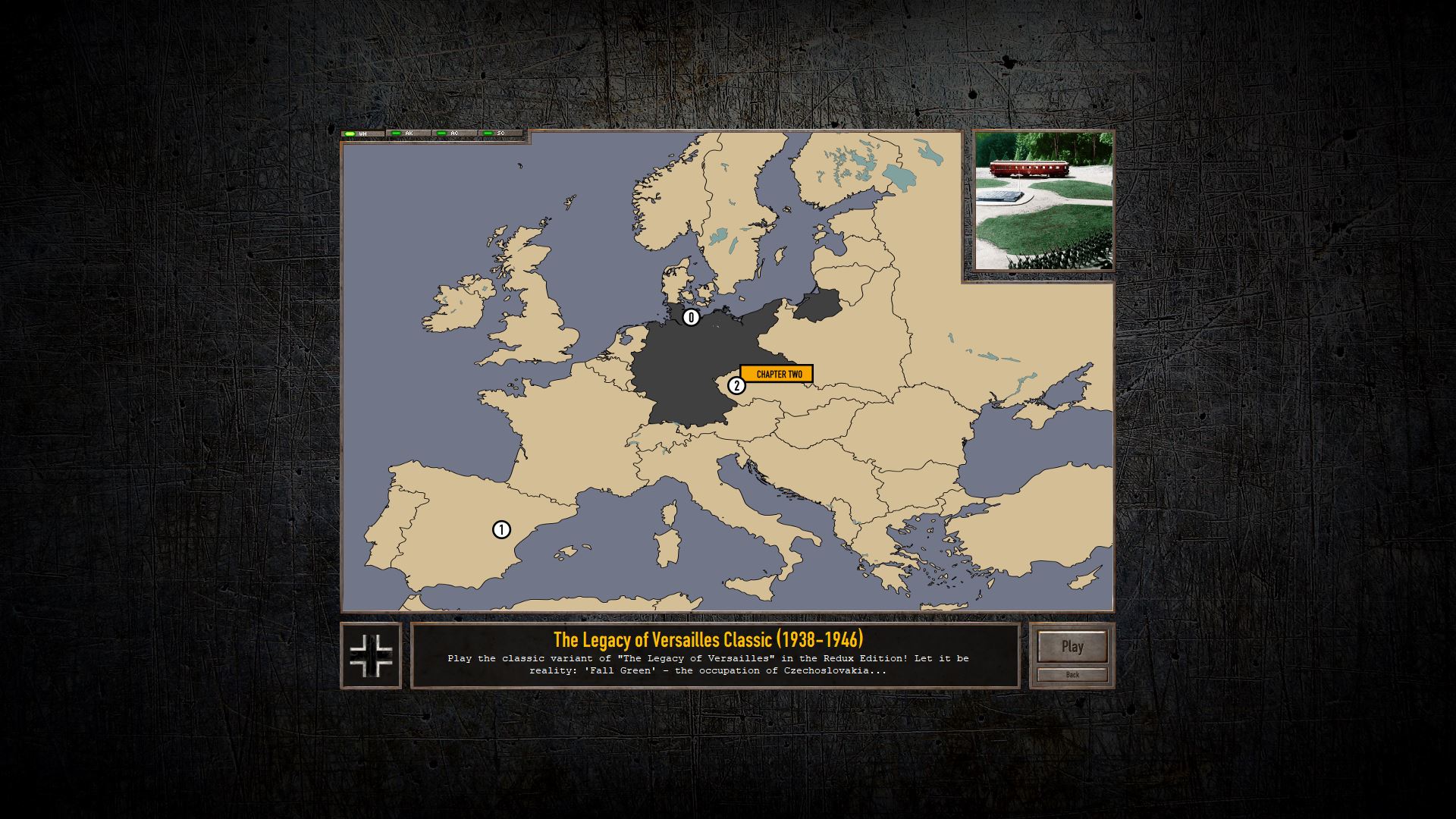 Clicking on "New Game" opens the redesigned Gamesetup. Here, the player is allowed to choose between three starting points, which are connected chronologically. Meaning that who starts with the prologue, sooner or later lands in the Sudetenland (Chapter Two) ... 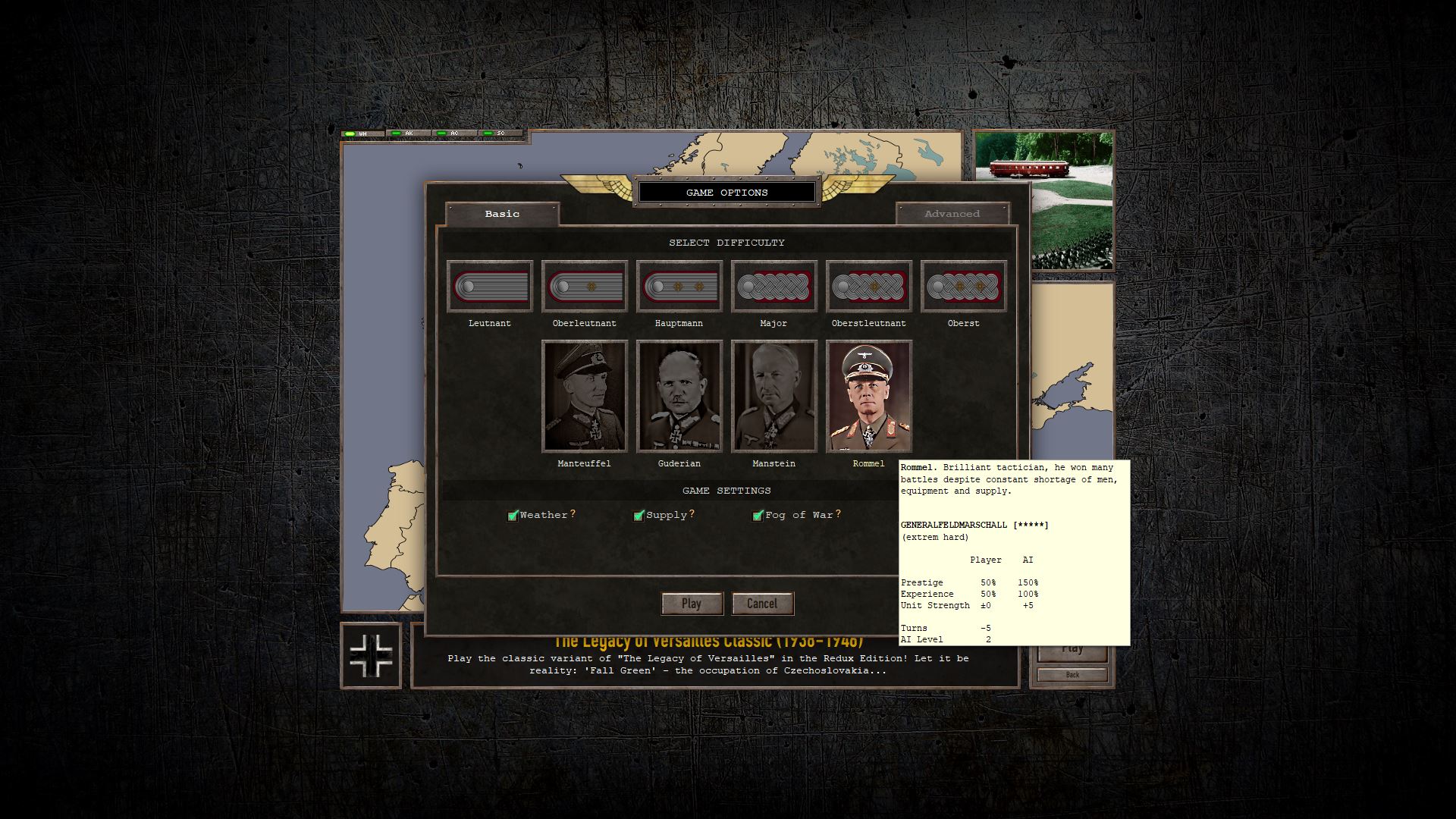 Once you have made your choice, the difficulty is set. In contrast to the original game, in some way already selectable all "hardcore" degree of difficulty. However, they were changed a bit in detail. In addition, there are the original five plus three (eight), now ten ... A running over and holding the mouse pointer on each difficulty graphics shows by "tooltip" the changes in detail ... 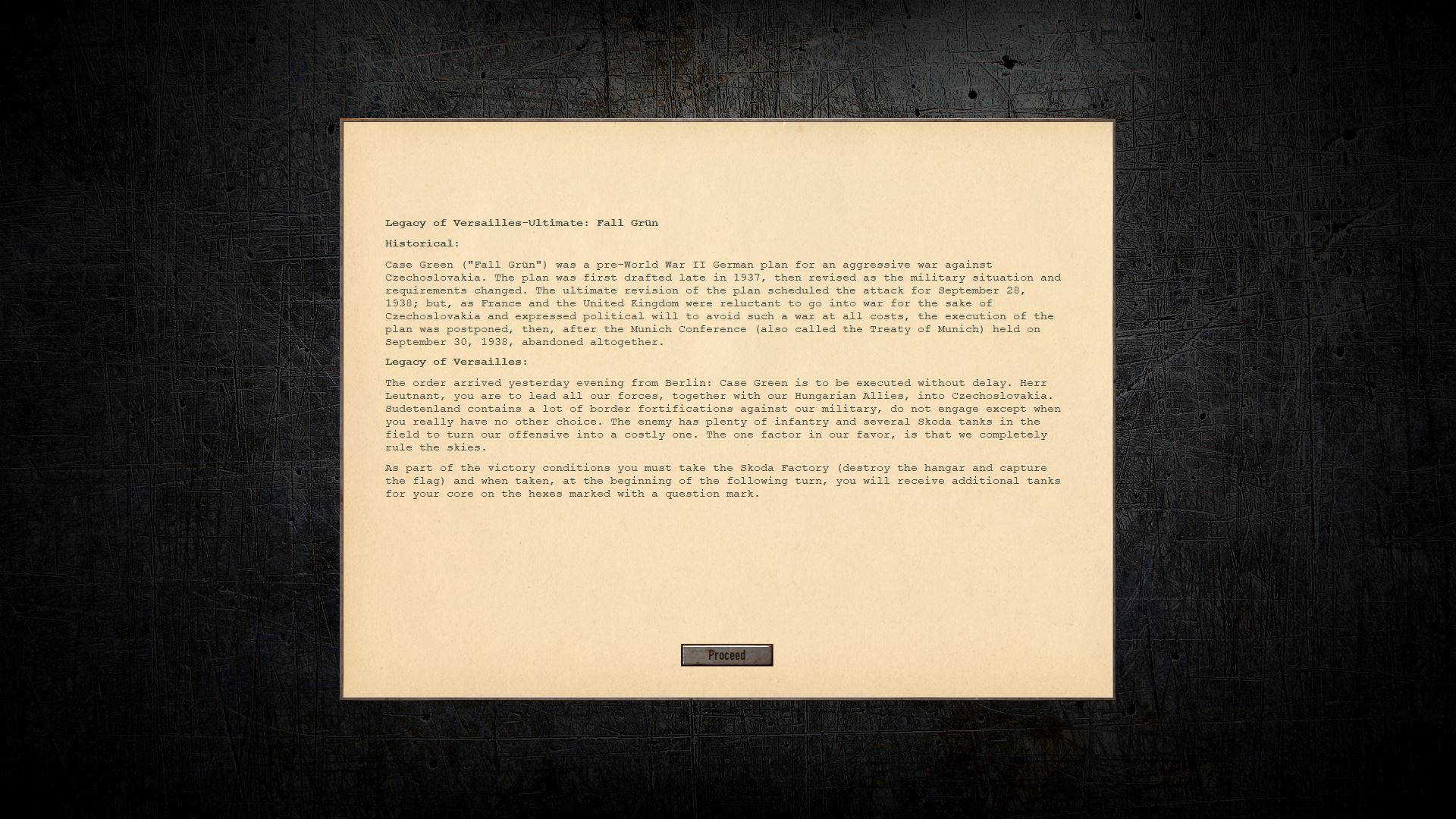 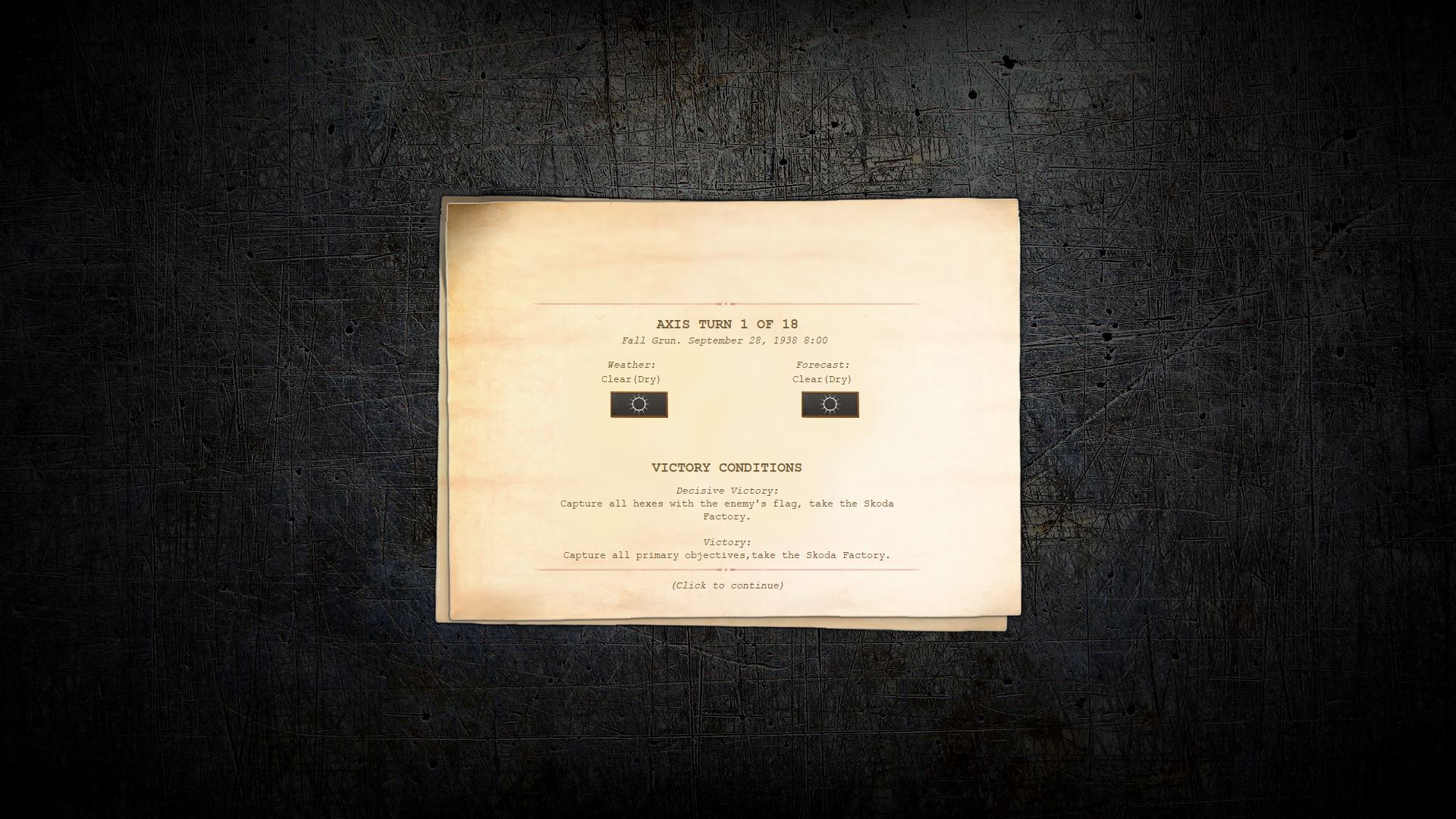 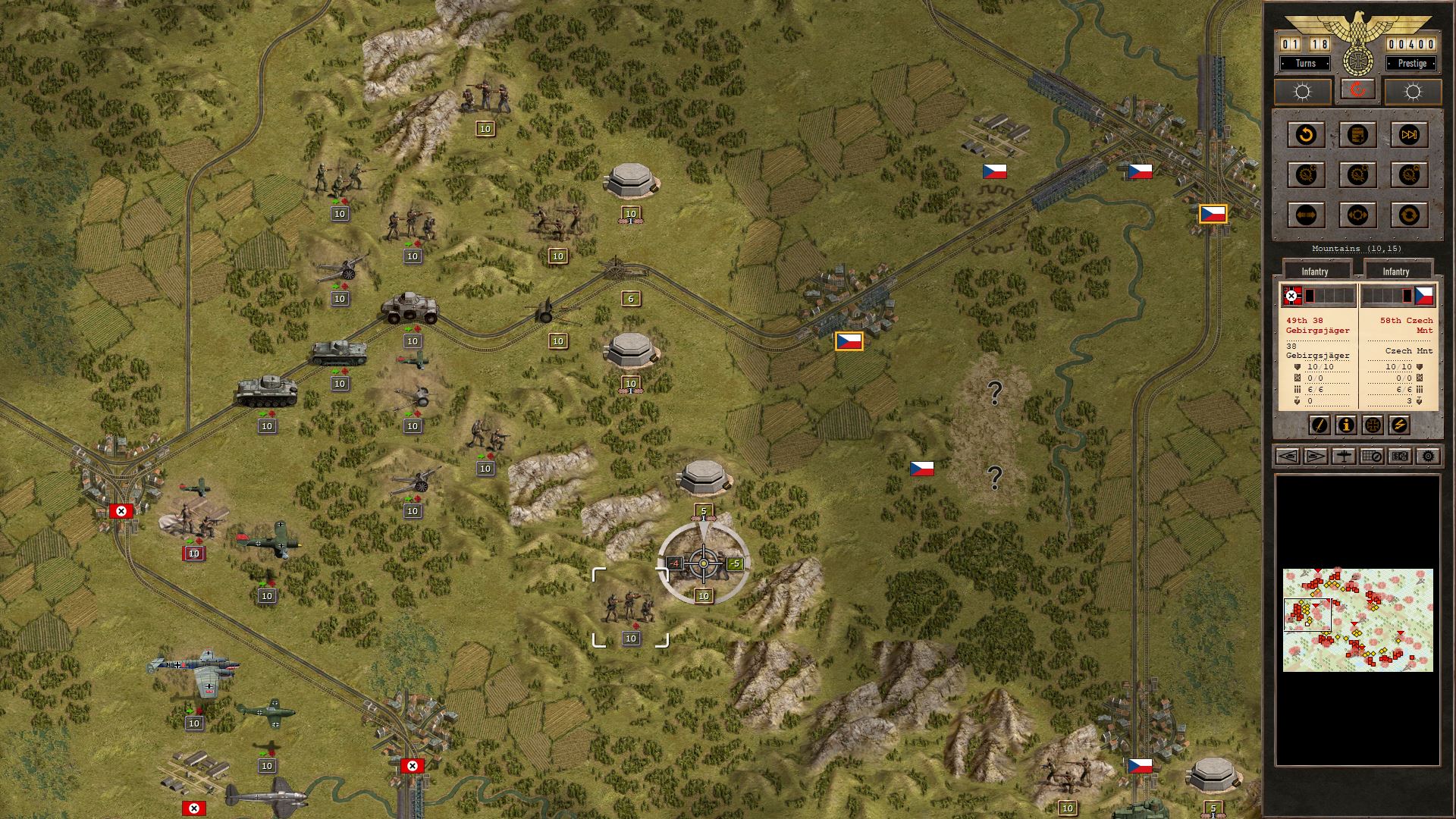 Much is certainly familiar (from the original) on the field. In detail - apart from the entire right-hand control panel, which has the typical LoV look - you can also discover other things ... 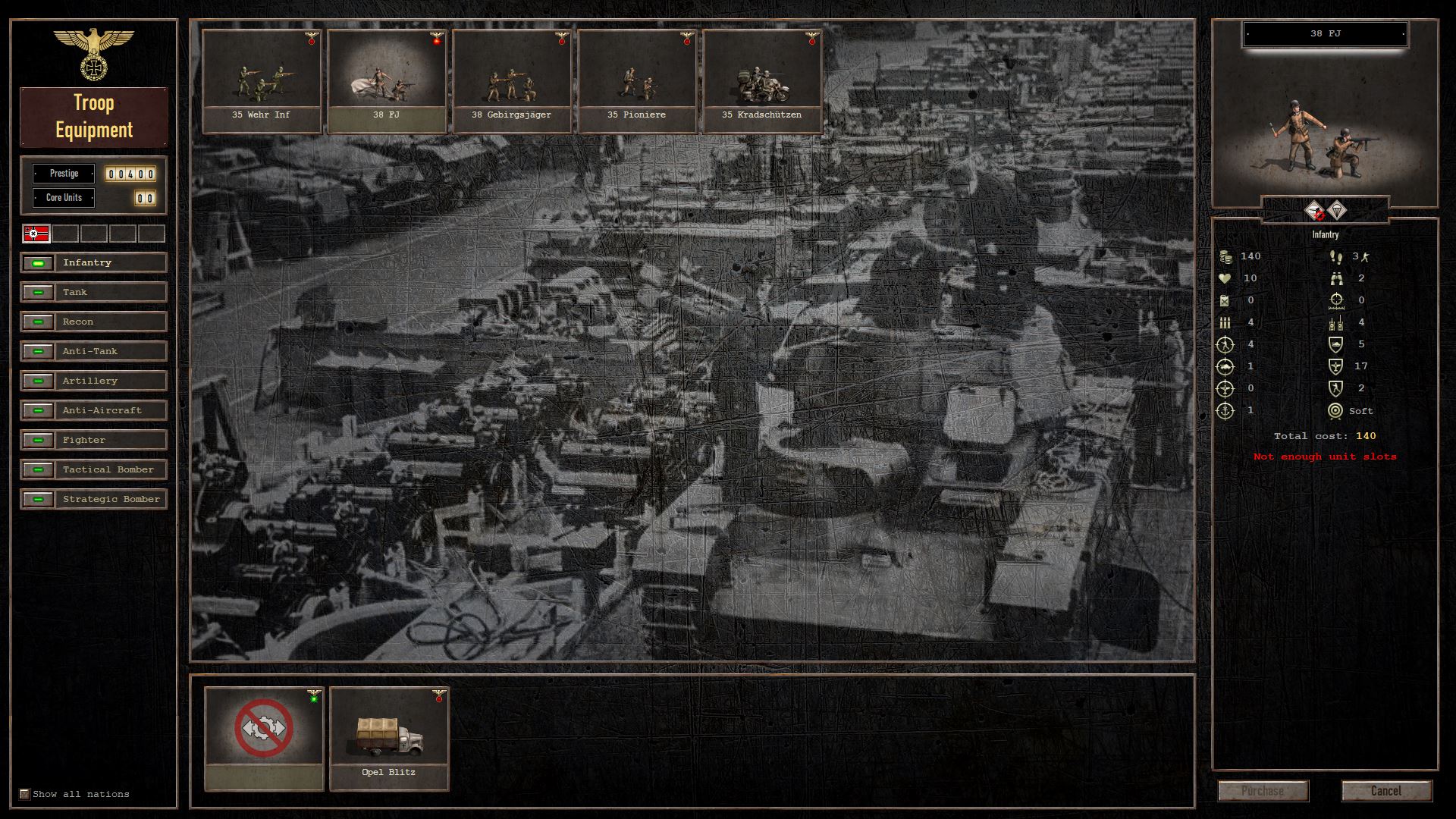 Also, the purchase screen has been completely adapted in LoV design ... 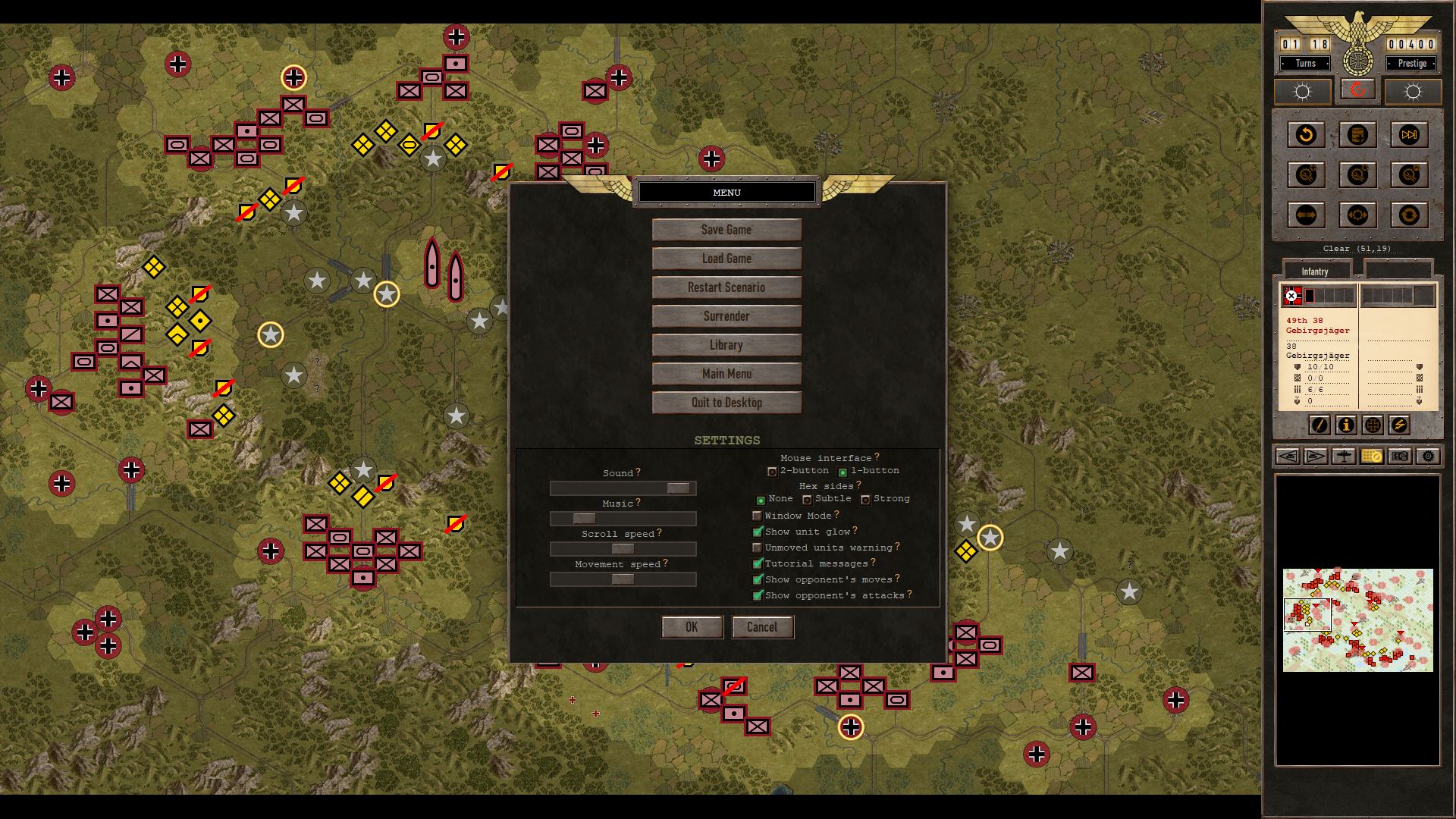 ... just as the InGame options menu (which is accessible with ESC) and the Strategic Map! 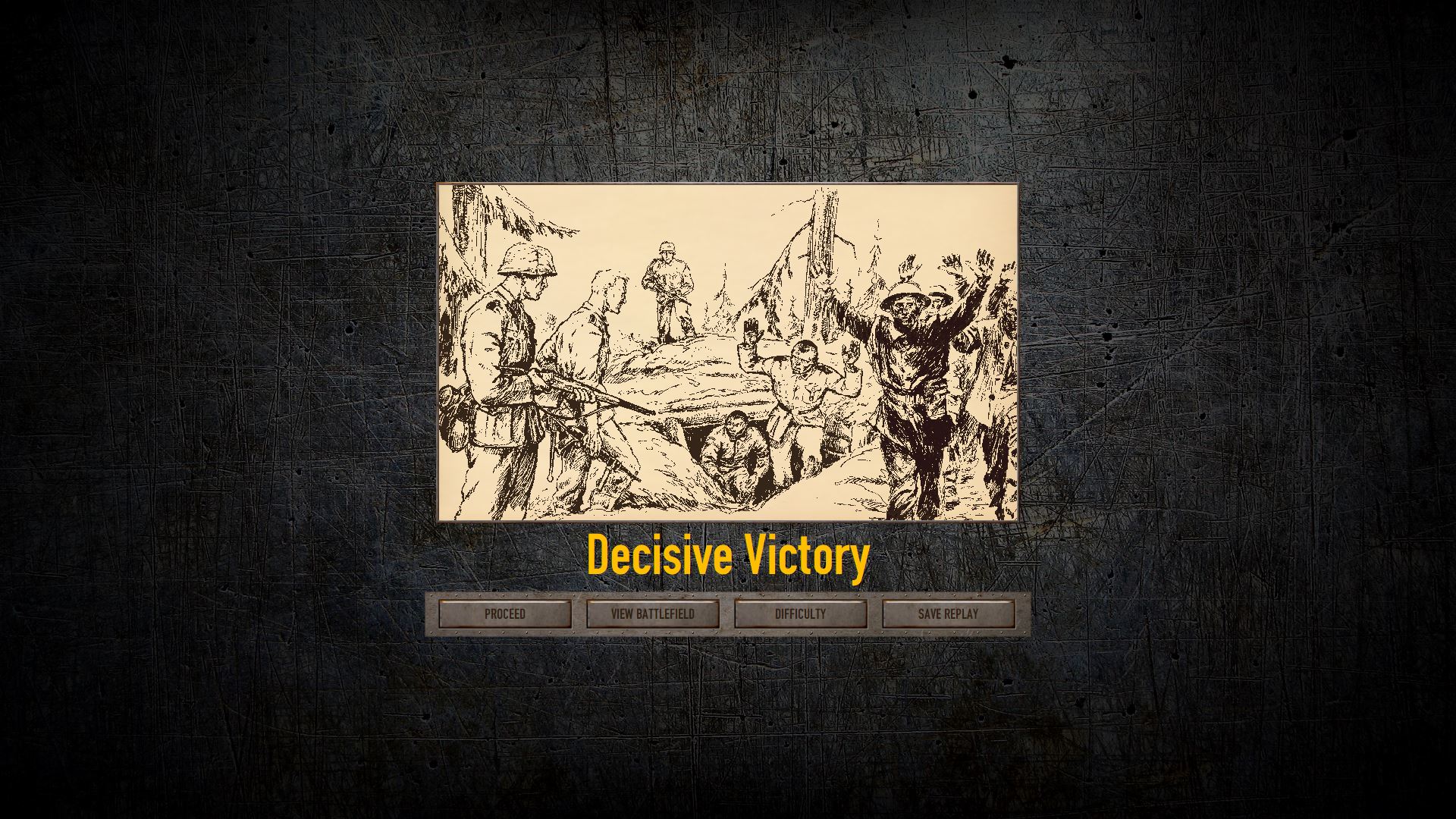 A question that may now be asked ... "When to expect a release?"

The developments for the Ultimate have already begun 2012 ... So it's all a while ago and LoV: Ultimate or now the Redux Edition should not be a "Duke Nukem Forever" -Pendant. With not even six years, we are well under half the development time that the Duke needed ...

After many ups and downs, many compulsory breaks in the development of LoV, this year's release is finally scheduled to be ... in a special year!

Essentially the Redux version is ready ... I'm still doing some fine tuning here and there ... A kind of quality management ... And then I think that after the summer holidays, generally in the third quarter, but in concrete terms probably in September, at the latest October (I think) then the mod finally - after more than six years - can let go of the leash ...
Top

The Legacy of Versailles - Redux Edition

- complete localization in English and German

This is good news. LoV is tough but good.
Top

Can't wait for this one.

I never tried LoV... I was always afraid... This version will be the moment !
Top

Can you tell me where exactly I can find it on the Streitmacht site? I've looked but I can only find LoV Vanilla.
Top

The Redux version is not available yet... At the moment is LovRed in the (last) development process...

Release is Sep/Oct this year...
Top

We are ready... and online!
LoV REDUX is available now from streitmacht.com...

Cool, is the link dead?

It is possible that you must first register at Streitmacht.com to download the mod ...

- After clicking on "Streitmacht.com", scroll down and press the yellow text button with "Ich bin mit diesen Bedingungen einverstanden" ("I agree this terms")
- On the next page please set the language ("Sprache": [Deutsch]) on [British English]
- Afterwards the registration has been changed to English language
Last edited by Soldberg on Sun Oct 28, 2018 7:10 pm, edited 1 time in total.
Top

Before I forget to tell you...

Here is a "First-Day-Patch" for all friends of the correct history ...

I managed to access the download link in Streitmacht page (no small feat...) but the download will stop at 114 mb (of 122 mb) and will no go further...
Top

Same thing happened to me, stopped at 114mb. Tried again and only got to 66.9mb.
Top