What will be after Road to the Moon?

Buran wasn't real ready to flight with a human team into space.
Buran had never reached an orbit higher than 300 km because of the missing main-engines.
The Energija was much too expensive and with four boosters maybe a greater risk as the Boosters from the STS.
Heat shield was inefficient and the used material more vulnerable to break off than the heat shield of the STS.


- Yes, Buran was rushed and trying to catch up to the Shuttle system
- Mounting the main engines on the orbiter doesn't really have anything to do with going to a higher orbit. The external tank provides propellant to the Space Shuttle Main Engines (SSMEs) and in effect looks like the core on Energia in that config (Orbiter+Core). Both Buran and Shuttle Orbiter have Orbital Maneuvering Engines which are what puts the Orbiter into its final orbit. Having the SSME's on the Orbiter is really a way to return the main engines rather than being expendable on Energia
- All else being equal, I am not convinced the Russian expendable system is more expensive than the American reusable system. The SSME's and SRM's have/had a huge standing army to support, maintain, and reuse. Plus there is a huge additional cost in the design and original manufacture to make them reusable. The characteristics of the hardware that affect design life are much more critical and costly for a system that has at 50 cycle design life like the SSME's for example vs only need to operate a few time like Energia.

I've worked with the SSME's, Shuttle Orbital Maneuvering Engines (OMEs) and with the Main Lox Hydrogen Engines on the core of Energia.

Yes and no. Yes, because indeed the monetary cost is divided amongst more players. No, because exactly this limited space spending is caused by the cooperation and its underlying political reality. There's no cold war now - no political will to engage the kind of money used in space exploration the 60s and 70s.

Actual BASPM is simulating ONE international space agency. Even the agency is international, the costs are astronomical. And ISS is working because there are different agencies which can split up costs.

For example: ESA isn't paying NASA for using their scientific equipment, communication costs and resources like water and oxygen. That works because ESA is doing some things for NASA:

1. Cargo transport with the ATV.
2. Technical, engineering and scientific support with Orion via ATV technologies.
3. Allowing to use ESA probes as carrier for US/NASA instruments.
4. Let Mars Express serving as on demand backup for emergencies of MRO and MSL. (Mars Express was involved into the "Sweep&Beep" campaign to reactivate Spirit)

That sounds a cheap deal, but that pay's off. Every kilo of material that doesn't need to be paid is more worth than pure gold. So if NASA can lift 2 tons of material into space without paying the rocket, fuel, cargobay and the groundcrew, it would save several millions per launch. It's a win-win situation.

That's something that one agency can't provide. That's what I tried to say.

That was sure the main problem for the whole Russian space program. Just with help of NASA and ESA, Ruskosmos managed to keep the Mir alive for such a long time.

But there were also some technical issues:
Buran wasn't real ready to flight with a human team into space.
Buran had never reached an orbit higher than 300 km because of the missing main-engines.
The Energija was much too expensive and with four boosters maybe a greater risk as the Boosters from the STS.
Heat shield was inefficient and the used material more vulnerable to break off than the heat shield of the STS.

But after all i had loved to see it starting to a real mission.

@nacho: If you realize this, please add Buran and Hermes to it. Even all the Lifting Body projects before the STS and Buran were developed.

Buran was never intended to carry its main engines. Anyway those are not used in space by the Shuttle, they are only for ascent to orbit ! Those are so huge they drain an olympic pool of fuel every second, so where would you put all the propellants ?

Buran featured a jet engine in the tail section, that was not powerful enough to fly it as an aiplane but could be used on descent and landing to significantly extend the glide and make the final flare a bit easier. That was a good idea.

Oh and while Buran didn't carry a crew, it made all its flight on autopilot, which was a first. That meant that unmanned freighter versions would probably have been possible.
Nicolas Escats
Buzz Aldrin's Space Program Manager Contributor
Top

woody4077 wrote:but would a space elevator be practical?
with everything thats already in orbit not to mention gravitational forces
and any geological forces on the earth a space elevator maybe a work of sci-fi for now at l;east

It would be practical. Because it's cheaper to lift cargo into space with it.

As far as I know the strongest rocket, that is in use to lift objects into space is the Ariane 5(es) (AFAIK just used to launch the ATV) with 20 metric tons payload for LEO and 8 metric tons for GTO. But the Ariane V weights around 775 metric tons at launch. And every kilogram of weight costs a lot of money.

The space elevator would make it a lot easier to bring cargo into space, because you can lift more payload with less launch weight. You don't need to build a new one every "launch" and you can use it several times a day. There would be no need for fuel or boosters. It just climbs up the cable, like you can climb up stairs in a skyscraper. If you build the skyscraper up to 100km, you can climb the stairs up to space. That works vice versa and you can use the energy which is created at the descent for the next ascend.

I suggest you this video on youtube. Markus Landgraf is working for ESA and he's some kind of expert for the space elevator and the realization. Even he start's in German, his speech is held in English.
http://www.youtube.com/watch?v=f8CpnKBn ... 8hK6laqdeQ
Top

TheCanadianVending wrote:As title suggests. So, Road to the moon will include up to, Skylab? MIR? Shuttle Era? Or will the second episode include the Shuttle, Mir and that


You got it.
Episode Two is from 1970-2020. Apollo Appliccations Programme (Manned Venus and Mars flybys), different types of moonbases, Skylab, space shuttle, Mir, Salyut, and maybe Orion, Ares, and SLS, ISS is certain

If all that makes it into episode 2, then it sounds really cool.

(or will be some discount for this who have base game now?)
Top

Will there be a discount for beta testers "first episode of", moreover, without discount also probably buy the game because I love dealing with astronautics:-)

Does and when will have early access as in "Road to the moon"?
Top

I know you're like me, the first episode is not yet out and you ever want a stronger thrill

But don't expect any real news about episode 2 before a few months.

And most important, the sales of the first episode with be the real judge.

PS.: Who own the BASPM source code rights ?
Top

All We expect the launch of BASPM - Road to the Moon, and start now with the second part, so to imagine that awaits us, I put image (I really hope we get the Buran) [Note: It's a fan art] 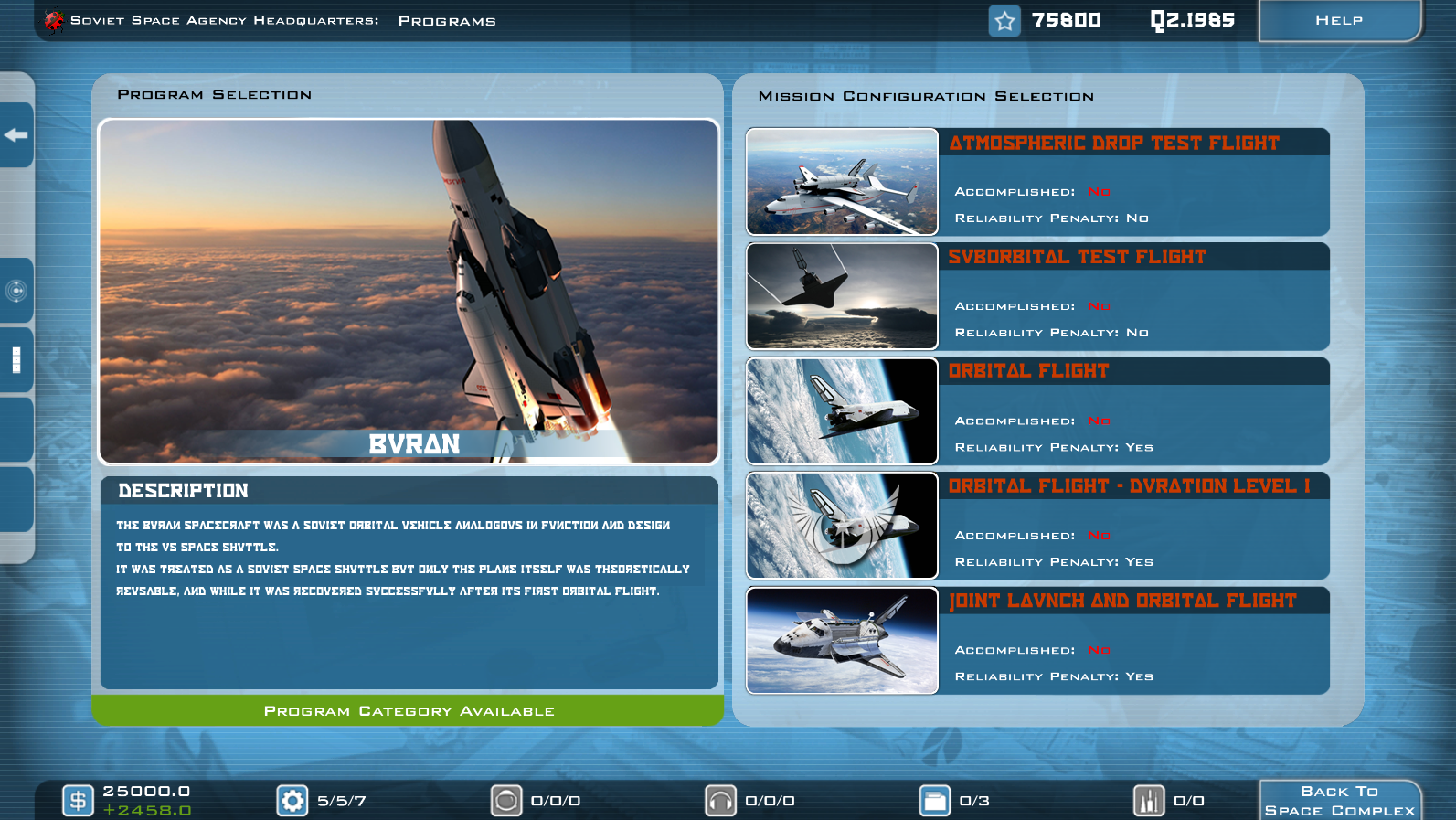 Pawelk198604 wrote:Will there be a discount for beta testers "first episode of", moreover, without discount also probably buy the game because I love dealing with astronautics:-)

Does and when will have early access as in "Road to the moon"?

We don't know yet whether there will be an early access program for episodes 2 and 3. For more info, check out the F.A.Q.