Sengoku Jidai: Shadow of the Shogun is a turn-based tactical and strategic game set during this turbulent time; primarily focusing on the Japanese Warring States period and Japanese Invasion of Korea. Other armies from East Asia are also made available to simulate different conflicts across the region.
Post Reply
17 posts • Page 1 of 1

Sengoku Jidai: Shadow of the Shogun offers the opportunity to lead armies from very diverse regions and countries: Japan, Korea, China, Manchuria and Mongolia.
We’ll cover each region in weekly previews, describing the available army lists, talking about their evolution and the weapons and tactics they employ.

Japan and its clans

Japan in the 16th century was a politically fractured reality: the Sengoku Jidai period (Warring States Era) was a period of civil war in Japan from 1467 to 1600. During that time, the Emperor of Japan was only a religious and ceremonial figure who delegated power to the Shōgun, the military governor of Japan. The era began with the Ōnin War (1467-1477) where a dispute between potential heirs to the Ashikaga Shogunate led to a civil war involving several daimyō and the destruction of Kyoto. Since then, the authority of the Shogunate had diminished while the daimyo increased their authority over their fiefs and fought against each other to expand their realms.

The era brought about the rise and fall of several prominent clans. Old families like the Imagawa and Hōjō would be eliminated. Some families would break away from their old masters and forge a path of their own, like the Tokugawa. The Takeda family, hailing from an agriculturally poor province, dominated central Japan through exploitation of their gold mines, and employed cunning military and political strategies against their neighbours. Peasants could become lords and make a name for themselves, like the Toyotomi. An Oda army defending behind field fortifications against the Takeda


The armies of the Sengoku Jidai were manifestations of the feudal social structure of Japan, which revolved around kinsmen and vassals. The head of the clan and its army was the daimyō, literally translated as “great name”. He was supported by the kashindan. These were a group of blood relatives and retainers associated by family ties, marriage, filial oaths, and hereditary vassalage.

A standing army was uncommon but was popularised during the later years of the Sengoku Jidai. For the majority of the period, armies were composed of farmers who needed to stand down during the planting and harvesting seasons.
Typically, when a call to arms was issued, each landowning samurai was required to muster a pre-determined quantity of troops and equipment based on his wealth. Troops from all around the province would then converge at a designated place where they would be reorganised into battalions wielding similar weaponry and start practicing drills. The daimyō determined the chain of command for the campaign. The prominent retainers would act as bushō (general). A taishō (field marshal, commander-in-chief) would be appointed if the daimyō did not intend to take the role himself.

Each general commanded a division comprised of specialised battalions of cavalry, missile and melee troops mustered from their fiefs. These troops were only loyal to their direct lord and the daimyo, not the taishō or other generals. To reflect this, Japanese commanders who are not assigned as the Commander-in-Chief are classified as Ally-Generals. Their units cannot receive any command effects from other generals except the C-in-C.

The Japanese wielded a variety of weapons, the prominent ones being the katana (sword), yari (spear), naginata (polearm), yumi (bow) and teppō (matchlock). Contrary to popular depictions, the katana was just a sidearm and the yari was the weapon of choice due to its range and versatility. All classes of soldier, from the lowly ashigaru to the elite samurai, wore armour of lamellar construction.

Before 1530, mounted samurai would primarily use bows, similar to other East Asian cavalry. The switch to the yari and shock tactics happened around the 1530s, pioneered by the Takeda clan.

The main fighting force was foot samurai, augmented by ashigaru. Due to the rugged terrain, the Japanese utilised loose formations and fighting was done man-to-man, as depicted in martial arts and samurai films. Hence they are classified as Warriors.

In 1543, Portuguese merchants introduced matchlock firearms (teppō) to the Japanese. Teppō ashigaru infantry were deployed, but there weren’t enough firearms available to equip large units. These small units are classified as Light Foot and are primarily used as skirmish troops.

By 1551, as battles grew larger, more and more ashigaru infantry were being mustered, as a result of which the proportion of foot samurai in the army was somewhat reduced. The Battle of Nagashino in 1575 showed the Japanese that massed volley fire from firearms behind field defences could defeat samurai cavalry. From then on, teppō ashigaru formations were larger and did not engage in mere skirmishing tactics.

By 1577, samurai cavalry had lost its appeal due to changes in battlefield technology and tactics. And by 1592, ashigaru infantry tactics evolved into fighting in close formation. They would receive better training and form the backbone of the Late Sengoku Era army. Ashigaru infantry, including yumi and teppō armed units, are now classified as Medium Foot. A century of fighting also depleted the numbers of available samurai. Just like their mounted counterparts, foot samurai, who still fought man-to-man, were finding it harder to dominate the battlefield against organized peasant foot troops. The 1590s also introduced some other elements of modern warfare such as light artillery, but these were not used as extensively as on the Asian mainland.

Buddhist monks of various temples also trained for combat. They had to take up arms in order to protect their temples from rival sects. These warrior monks were called sōhei. During the Gempei War (1180-1185), the sōhei eventually became embroiled in secular politics as they joined the lords that supported their temple. This was repeated during the Sengoku Jidai and the daimyō were able to gain the support of sōhei from their local temples.

The monks’ weapon of choice was the naginata, a long-bladed polearm. They also used bows and matchlocks. Occasionally, they can be seen wearing armour underneath their robes but the majority were unarmoured.

Alongside the various japanese clans, you can also lead a different type of army which finds its origin in feudal Japan: the Ikkō-ikki. It was a militant movement which followed the beliefs of the Jōdo Shinshū (True Pure Land) sect of Buddhism which taught that all believers are equally saved by Amida Buddha's grace.

The Ikkō-ikki revolution gave some sōhei a new purpose. Instead of fighting for their temples and patrons, they fought under an ideology of equality and independence from the daimyō. Ikkō-ikki rebel armies were mostly made up of sōhei and supported by armed peasant mobs. Samurai who shared their ideals also joined but did not form separate units. The samurai fought alongside the monks and peasants and provided leadership as well as training.

That's a great idea. Thank you for all the information...
Top

please ashigaru yari too and special units like the Fire Cavarly for Takeda and, why not, onna bushi ( cavarly or foot ) 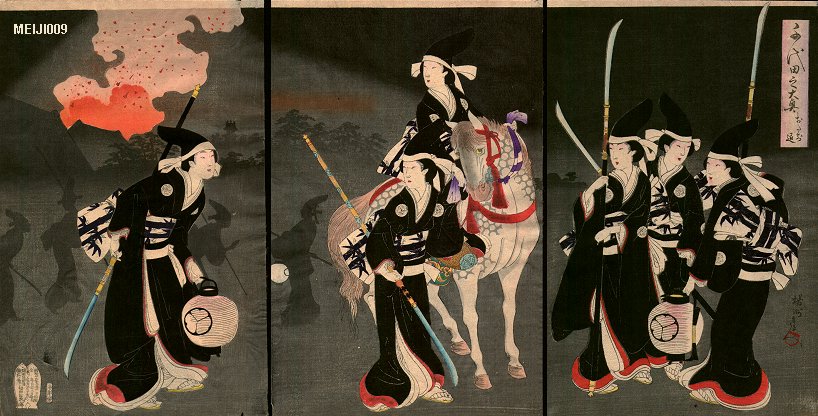 While the women warriors existed, I don't think they formed homogenous battalions. Most women fought and defended households and castles as auxiliary troops. Most famous onna bushi accounts came from the Heian era which predates Sengoku Jidai by centuries. And it was usually tales of individual women. During the Sengoku period, samurai wives did fight to defend castles as previously stated.

The famed Takeda fire cavalry is Yamagata Masakage's unit. Though famous for their red armor, there is no evidence that they are far superior than other mounted samurai during the era. We do have mounted Hatamoto in the game which are Elite units and are better than the Superior Mounted Samurai units. We gave them red armor. But of course, Hatamoto is not unique to just one clan. Tokugawa general, Ii Naomasa's unit wore red too. He was called the Red Devil.

The extra units in Shogun Total War may seem cool gameplay-wise, but they were not historical.

Someone can mod them in too.

I am agree, my idea is a sort of special onna bushi "unit" in siege battles ( in campaign and battle scenarios ) , of course a "onna bushi" mod can be welcome

archita wrote:I am agree, my idea is a sort of special onna bushi "unit" in siege battles ( in campaign and battle scenarios ) , of course a "onna bushi" mod can be welcome

This would be cool, of course it doesn't stick to true historical accounts, but it would still be cool to add.
Top

Look at the first picture... how considerably harder and more intriguing the game would be if our view was restricted to what the Honjin can see...
That would require the player to assign some units to the AI control.... to take over when he can't give direct orders to them. Ah... dreams.

GShock112 wrote:Look at the first picture... how considerably harder and more intriguing the game would be if our view was restricted to what the Honjin can see...
That would require the player to assign some units to the AI control.... to take over when he can't give direct orders to them. Ah... dreams.

Yep I used to play SoW and TC2M with restricted view. Same with TW engine (the R2 way is the best ... sadly battles are simply too small).

Yet it wouldn't be a bad idea because it would lay the base on multi-army battles. If the AI can take over the player's units then there can be multiple AIs in battle which means there could also be entirely separated AI armies on the same battlefield. The Co-Op option... but how to do that in a turn-based game I wonder?
Top

This whole series is definitely by next purchase. I've always been interested in this era of Japan and China. I'm hooked!
Top

Good summary. I don't see any info on the other factions (please correct me if I'm mistaken).

One of the reasons why P&S is easier to play, is that I'm more familiar with the terms. A summary of the other factions would be helpful.
Top

LoyalSoldier wrote:Good summary. I don't see any info on the other factions (please correct me if I'm mistaken).

Will this game ever be ported to mobile?
Top

There are currently no plans to do so.
Richard Bodley Scott

Only one thing I want to say,why did this game not have Katana Samurai only have Yari Samurai?Are they not use Katana swords in battle?
Top

The katana was not a primary weapon used in battle. Instead, the Japanese relied on the Yari (spear) for close combat, or, in earlier times, the Naginata (glaive). Indeed, the wakizashi (short sword) and tanto (dagger) were probably used just as often as side arms, and I believe the wakizashi was considered the more effective weapon during the Edo era (which saw almost no large scale fighting, but small skirmishes and duels). The katana's main role was symbolic.

This actually is pretty similar to the situation in Europe in the period covered by the game. Knights would use lances on horseback, and on foot, Poleaxes were the knightly weapon of choice in the 1400s.

"Katana Samurai" were inserted into Shogun 2 Total War as part of the RTS game trope (totally inaccurate of course) that swords somehow "counter" spears. It is also a result of the fact that most Samurai movies are set in the Edo era, which had virtually no warfare, and the little combat there was was mostly between individuals or small groups of unarmored men.

It's kind of similar to the image of the Western (everybody blazes away with deadly accuracy with a six shooter) and the reality of late 19th century warfare (revolvers are mostly sidearms; the vast majority of soldiers carry a rifle or carbine, and most battles are decided at long range).
SnuggleBunny's Field of Glory II / Medieval / Pike and Shot / Sengoku Jidai MP Channel: