The Cylons have rebelled. The alliance of the Twelve Colonies falters. Take control of the Colonial Fleet and save humanity from an endless war.
Post Reply
1 post • Page 1 of 1 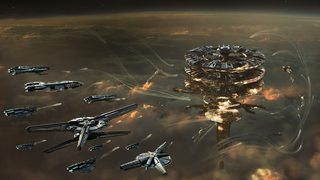 A few questions crossed my mind whilst gearing up for this mission during my Sin and Sacrifice replay over the last few days.

The first is based on the promotional art that was used for Sin and Sacrifice. Was this mission originally intended to take place in Caprica's atmosphere by any chance? I can't help but feel as though the stakes are lessened by the basestars being so far away in the mission's current form. Had it been just like the picture however, I get the sense I would feel more urgency, even though rationally, I know the mission would play out exactly the same.

The second is the fate of Galactica. Resurrection tells us she executed an emergency jump into the Phoebian Ocean. My question is how is this possible given they couldn't make the jump to Cocalus? Wouldn't it make more sense for her to have fallen out of the sky, especially since the briefing packet for Second Blooding says Caprica's ancient Kobolformers are still cleaning up the damage caused by the crash, three years later?

Linking points one and two, if the backdrop of the mission was closer to the image above, I feel it'd also add more weight to leaving Galactica behind, since leaving them deep within Caprica's gravitational pull would spell out just how frakked Nash and his crew were when we jumped away, and help explain some of the animosity towards Cain and the Daidalos crew in season 2.

I have to say, if the backdrop of this mission was originally intended to make us feel like we were fending off the Cylons above Caprica's clouds, it's my hope that we may yet one day see it updated, because I'm sure I'm not alone in saying that I'd love to jump into that battle and instantly know we really are the last line of defence for Caprica City.
So Say We All!
Top
Post Reply
1 post • Page 1 of 1