There is a reason we still require two keys for every nuclear launch.
That nuke is a decision that cannot be unmade. Once it’s out of the tube, it's not going back in. The weight of that should rest heavy on our shoulders. When we allow that decision to be minimised, we allow for the justification of similar decisions when the enemy is no longer Cylon.
Our partisan history is a tragedy. It is a stain on our proud colonies. Virgon is no better for the part it played in that history. Nor are we.
I pray that the future of warfare will be different. When a hasty decision can be rescinded, and the warheads diverted from those you mistakenly thought were enemies. Should that future come to pass, let this document stand as a relic of older, less forgiving times.
Until then, it is our responsibility to understand the weight of every trigger pull, of every launch key turn, and of every decision made in our name, and the name of humanity.
- Transcript of Senator Jervis Haskins [LEO]

With the COVID-19 pandemic situation in Australia (where the development team is based) coming largely under control, the Black Lab Games team have been making great progress lately on the next expansion for Battlestar Galactica Deadlock. Today, we’ll share some information about two of the major features of the update, Photo Mode, and multiplayer objectives.

If you’re part of our Discord, you’d know we have a dedicated channel for game media. Members of our amazing community have captured some stunning images of the game during battle replays. Virtual photographers like ghostinthecamera have used various tools to augment the in-game graphics to dramatic effect. If you’re like us, part of the appeal of the Battlestar Galactica TV show was its unique look and cinematography.

With all of that in mind, when we planned Season Two, one of the features we wanted to include is a photo mode. We wanted everyone to be able to create great looking space battle images from their battle replays, conveniently and with a range of options to achieve the look you want.

As well as some additional controls for the camera to get the exact position and angle you want, there are a range of image tools available. For example, there are camera adjustments, such as focal distance and depth of field, and colour effects like saturation levels and color temperature, not to mention a range of filter presets.

Below are a couple of images we created during development of the feature. 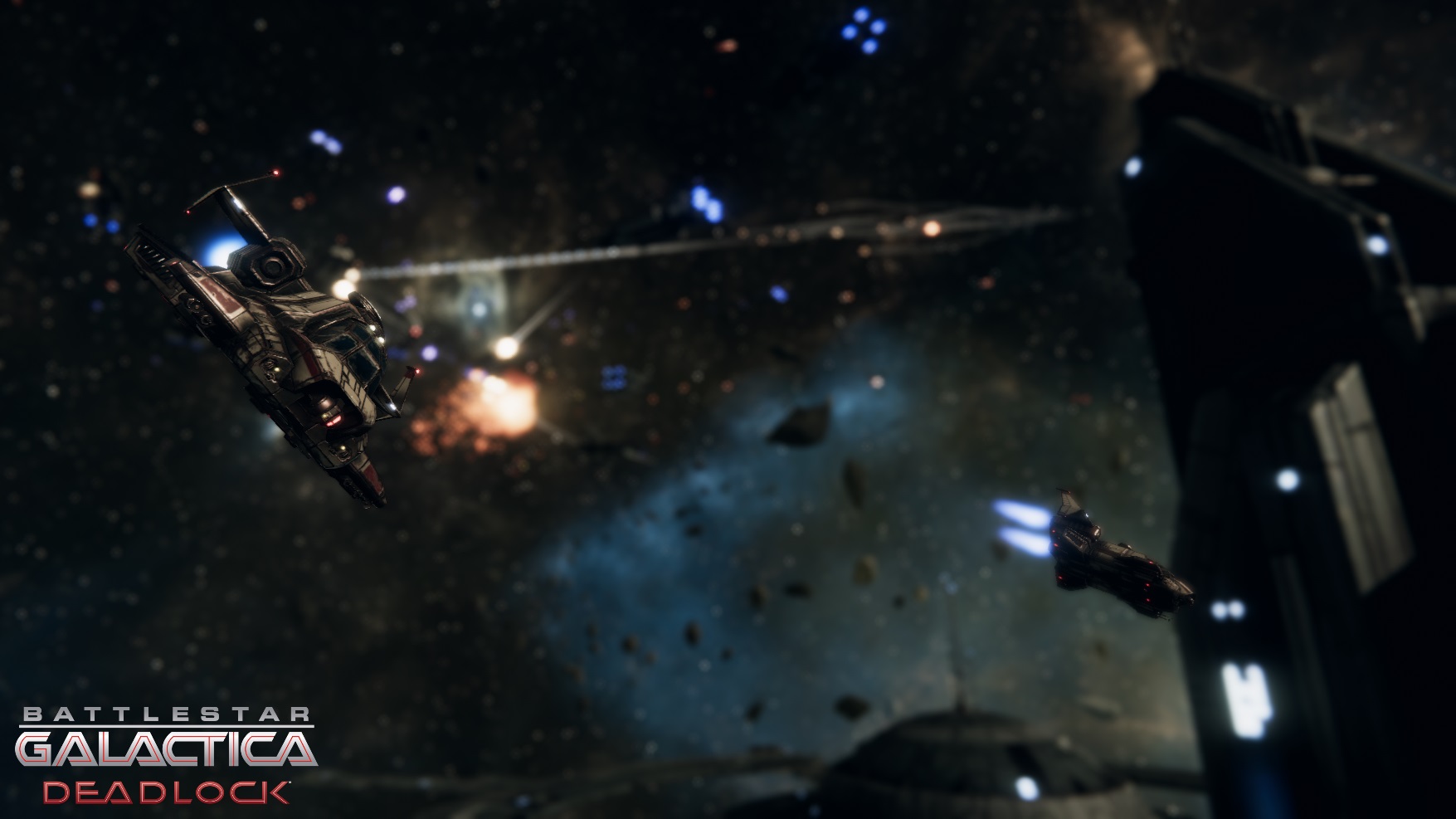 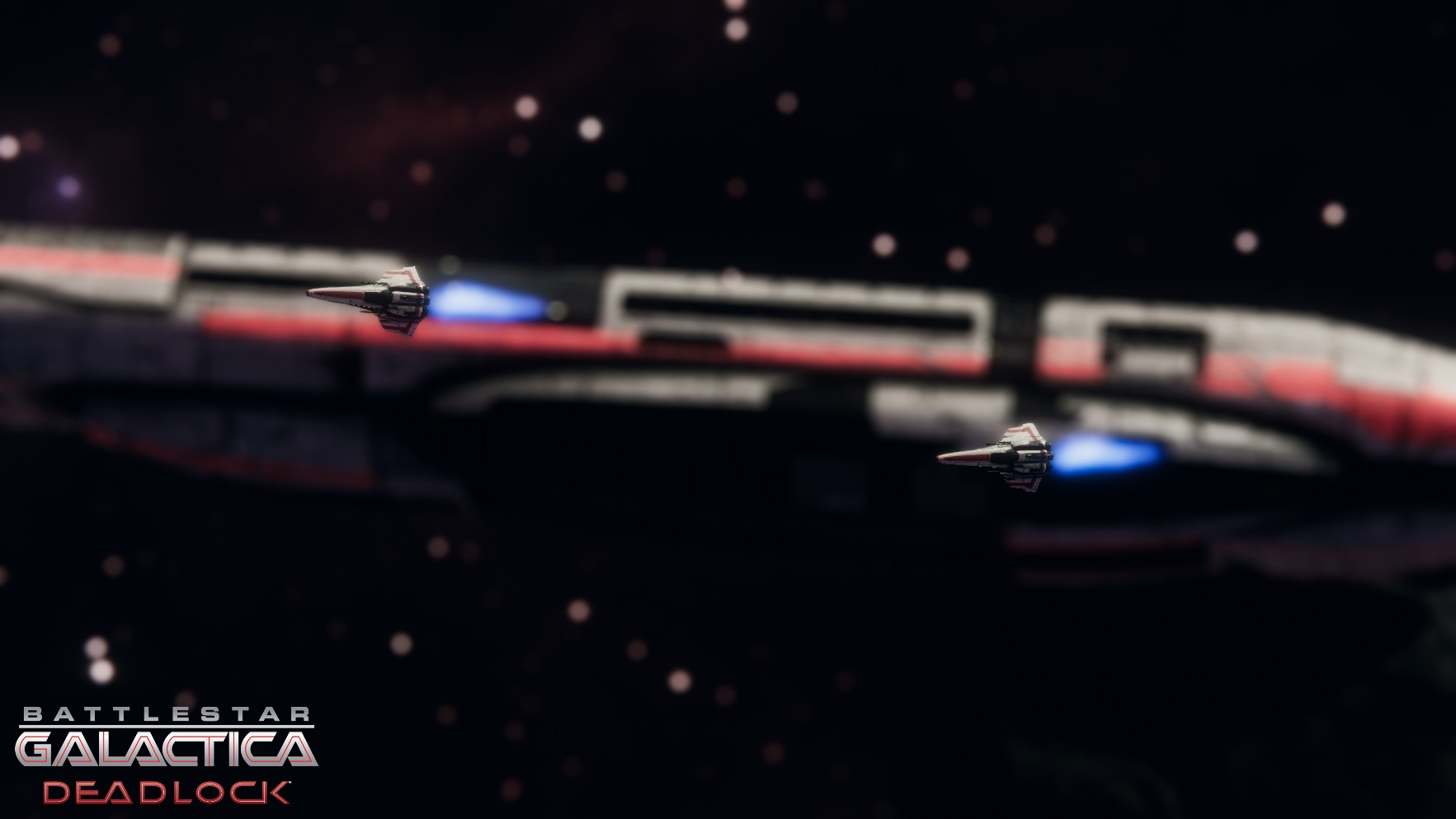 We really can’t want to see what the community does with this feature when it’s finally released!

We are also making a host of improvements to multiplayer, including a number of new modes. Presently, all multiplayer battles have the same objective - destroy all of your enemies ships. In single player skirmish, and the campaigns, there are often additional objectives, such as boarding a space station or protecting a civilian ship. We are bringing some of those objectives to multiplayer, in the form of 3 new modes.

In Demolition mode, one fleet is tasked with destroying a mission critical station; the other with defending it at all costs. The attacking player wins if the station is destroyed.

A refugee fleet of defectors is ambushed while their FTL drives are spooling. In Extraction, the defending player wins when at least one civilian ship jumps out of the battle.

Finally, Propaganda. A strategic satellite relay is ready to broadcast your political manifesto, but you will have to fight for control of the network. The more satellites you control, the faster your opponent’s counter decreases. The match ends when one player’s counter reaches zero. The player with the most points wins.

We are almost ready to start beta testing these new features, as well as a number of others, so we are putting out a call for beta testers. If you’d like to help us with giving the new functionality a solid shakedown, please go ahead and sign up right here.

Thank you for everything. It is a masterpiece. I have been dreaming of playing game like this game since childhood(since the first time I watched show.) By the way, stay safe and be careful against the covid. So, ı wanted to say thanks and ı did. Have a nice day.
Top
Post Reply
2 posts • Page 1 of 1