HISTORICAL BACKGROUND :
The year 69 AD found Rome in turmoil. Vitellius and Vespasian were vying for the supreme power. Marcus Antonius Primus, Vespasian's general, wrote a letter to Civilis, encouraging him to simulate a rebellion in the lower Rhine region in order to keep the Rhine legions from reinforcing Vitellius in Italy. Julius Gaius Civilis was a member of the old royal house of the Batavi tribe and was also a prefect in the Roman army. He was a friend of Vespasian's, having campaigned together in Britain. This request was the sign Civilis had been waiting for to launch his long-planned revolt against Rome. Like Hannibal and Sertorius, he had lost an eye, and his face was scarred. He dyed his hair red to signal his determination to wage total war on Rome !


The Rebels were encamped in a forested area on the banks of the river Meuse. They intended to ambush the advancing Romans in the nearby woods. But the Romans stole a march on the Rebels and already occupied the woods in the early morning hours.

The Roman deployment from left to right :

Cavalry along the river, 2 Avg + 1 Sup Legion in the woods :

1 Sup + 1 Avg Legion in front of the fortified camp in the center, flanked by the 2 Auxilia BG in a gully : 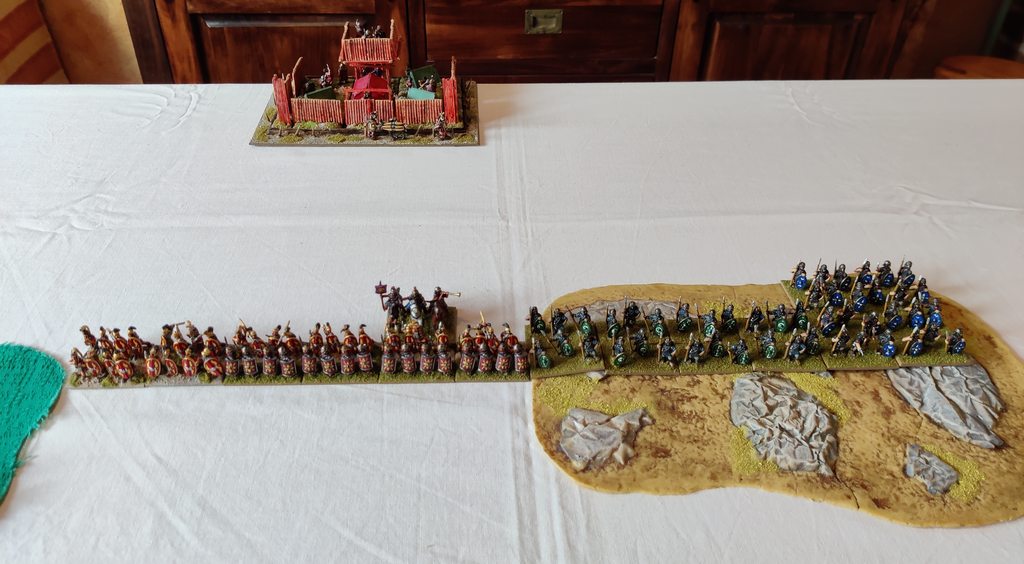 The Light Horses and the Poor Slingers, in a wood, on the far right :

The Rebel deployment from right to left :

Batavian Cavalry along the river, then the Cherusci ally and the 2 Sup Warriors BG.
A ruined Roman villa served as camp for the night.

On the far left, 8 more Avg Warriors, the second Batavian Cavalry and the Roman Cavalry :

Bird-eye view of the whole battlefield : 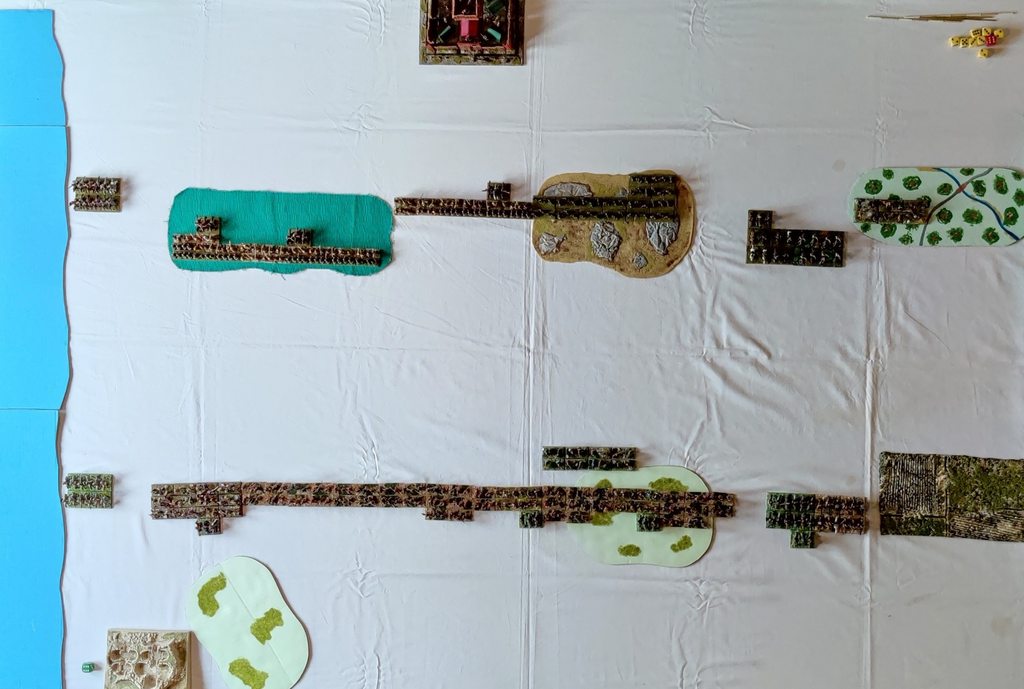 TURN 1 :
The Roman legions advance out of the woods and in the center. The Auxilia regroup to shorten the frontline and protect the flank of the legions. The light horses skirmish in front of the Rebel cavalry. 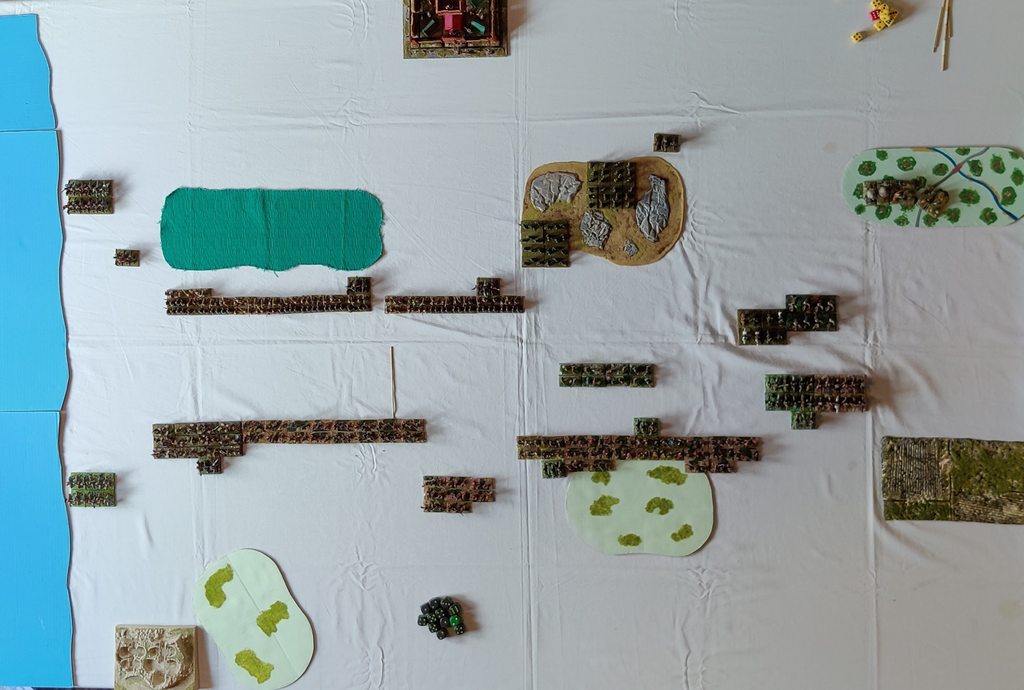 TURN 2 :
On the left, the Rebel warriors also advance, and on the right they manoeuver to turn the Roman flank. The cavalry chases the Roman light horse.
The Romans hold back part of their infantry to play out their superiority in cavalry along the river (Arm + Gen vs Pro) ; but they see an opportunity to advance in the center. 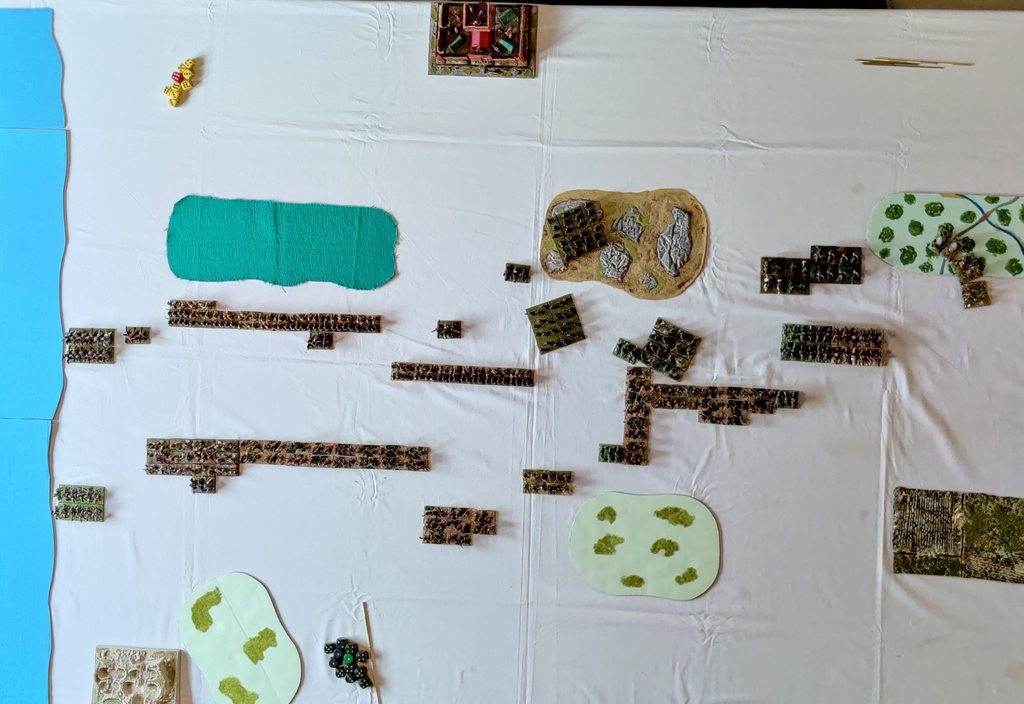 TURN 3 :
The wily Romans advance further to tempt a Rebel BG to charge impetuously. It would fight being twice overlapped, as the BG on its left is too far away from the Romans. 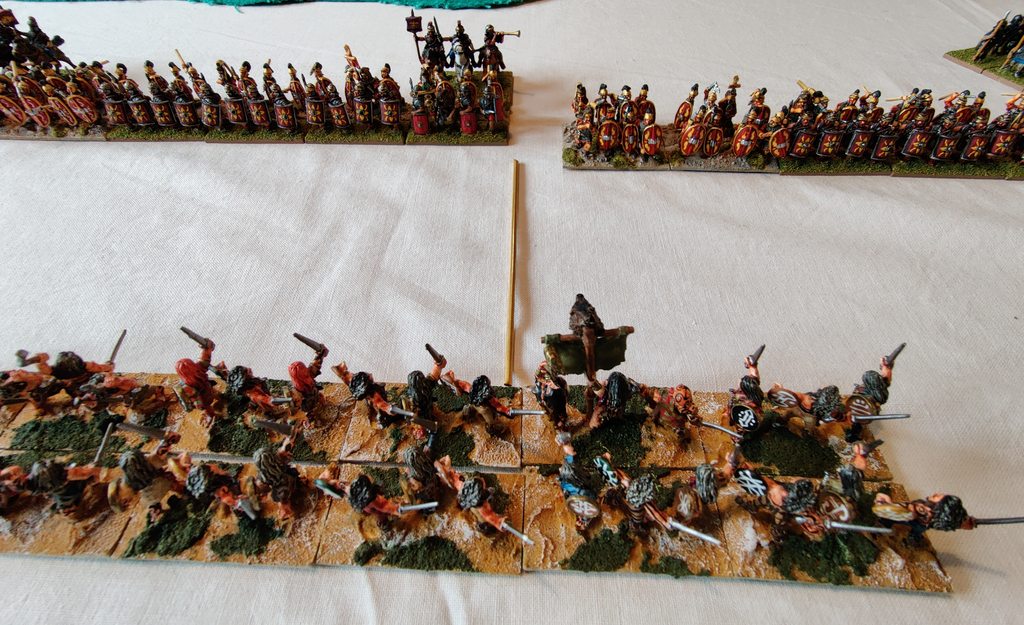 The same trick is applied on the other end of the line.

The Rebels, however, resist their urge and remain under control. Damn !

On the right, the Auxilia also remember the lessons from the military academy : one BG is tempting the barbarians to charge while the other one is poised for a flank charge. It all comes to nothing, however, as here also the Rebels show good discipline. Damn again !

The light horse continue to retreat and stay out of shooting range from the enemy javelinmen. 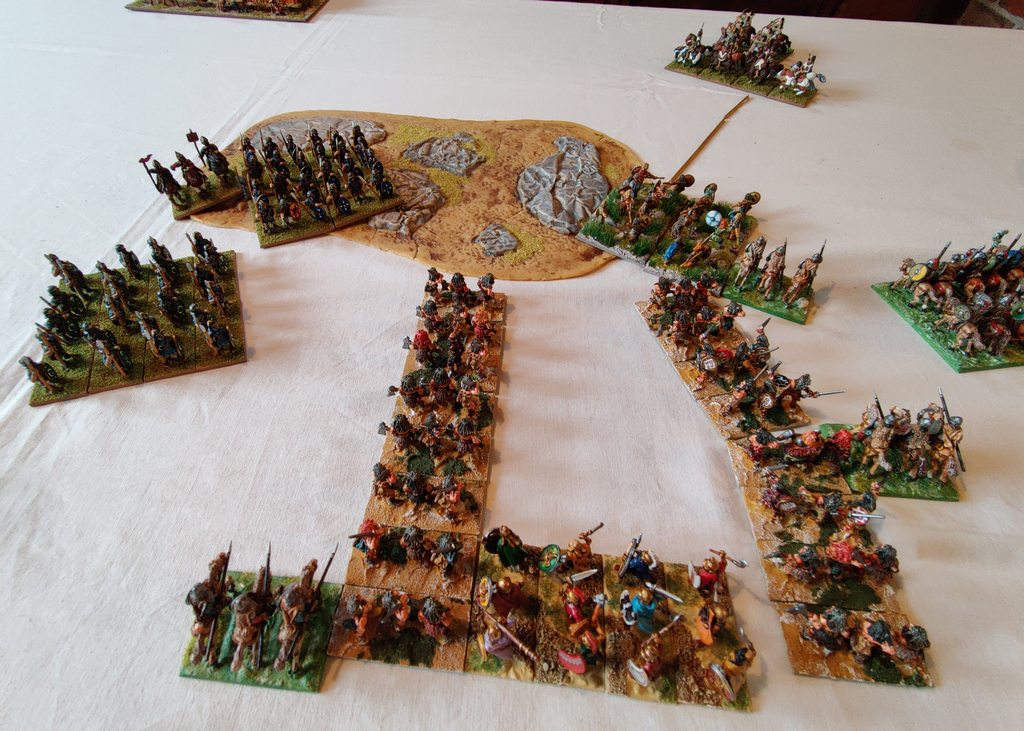 TURN 4 :
Finally, the barbarians charge in and get the better of the impact fight ! By Jupiter, 2 Roman BG are disrupted and a base is lost ! 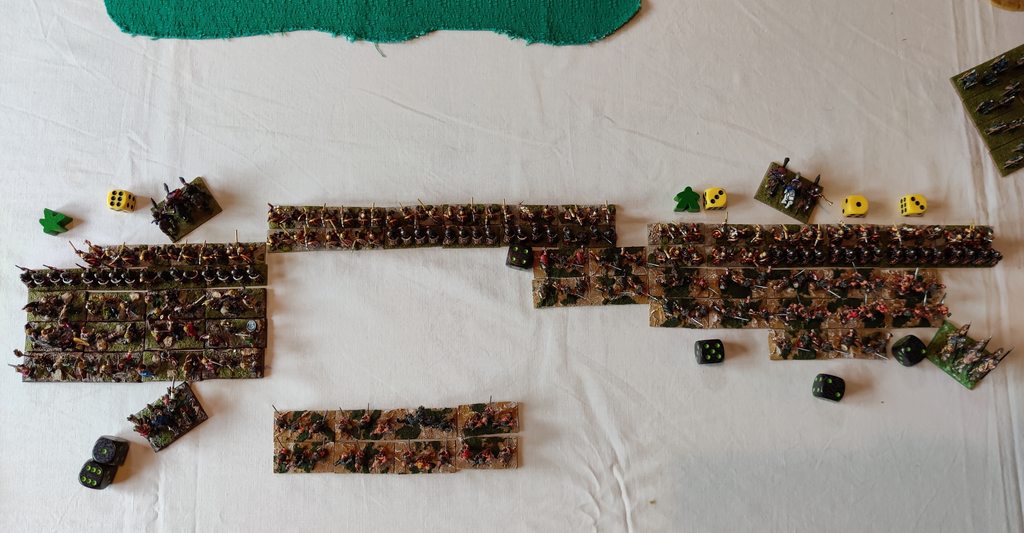 See how the Cherusci crash into the Roman legion ! 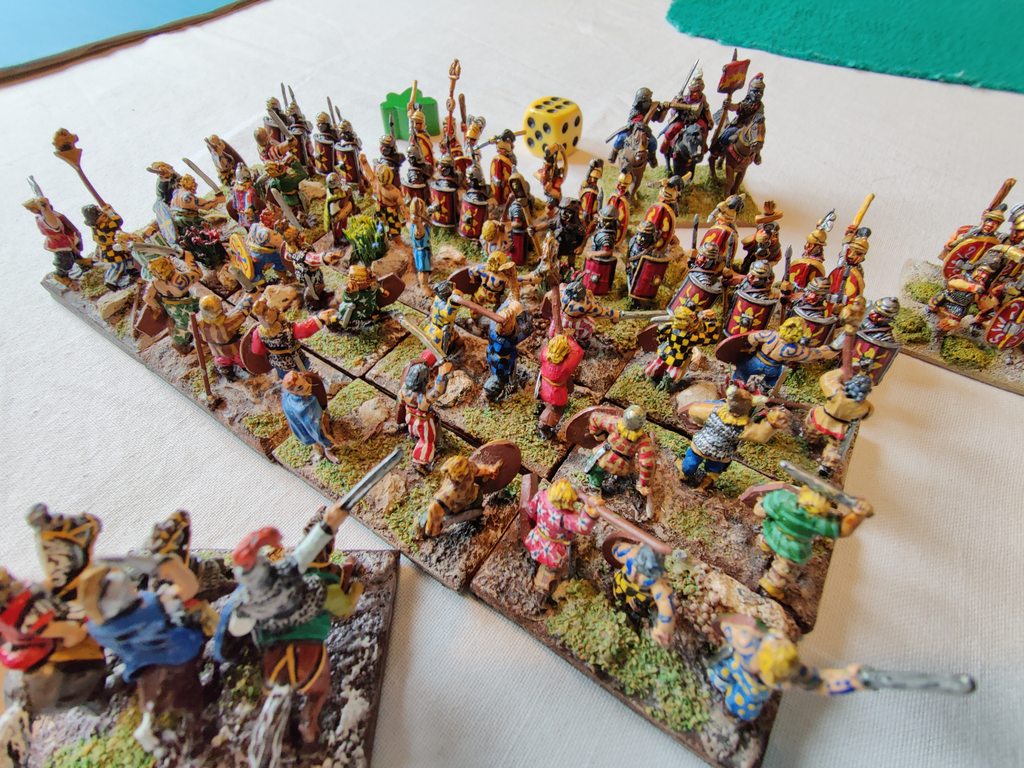 In the following melee phase, the armour of the legionaries begins to tell and the Batavians loose 2 bases ; but, holy Minerva, the Cherusci are in a frenzy and fragment their opponents !

On the right, it also results in a straight fight. The Auxilia in the gully charge the barbarians and align on them to get out of the way of the second barbarian column. The supporting Auxilia turn 90° to face the Rebel Roman Auxilia. 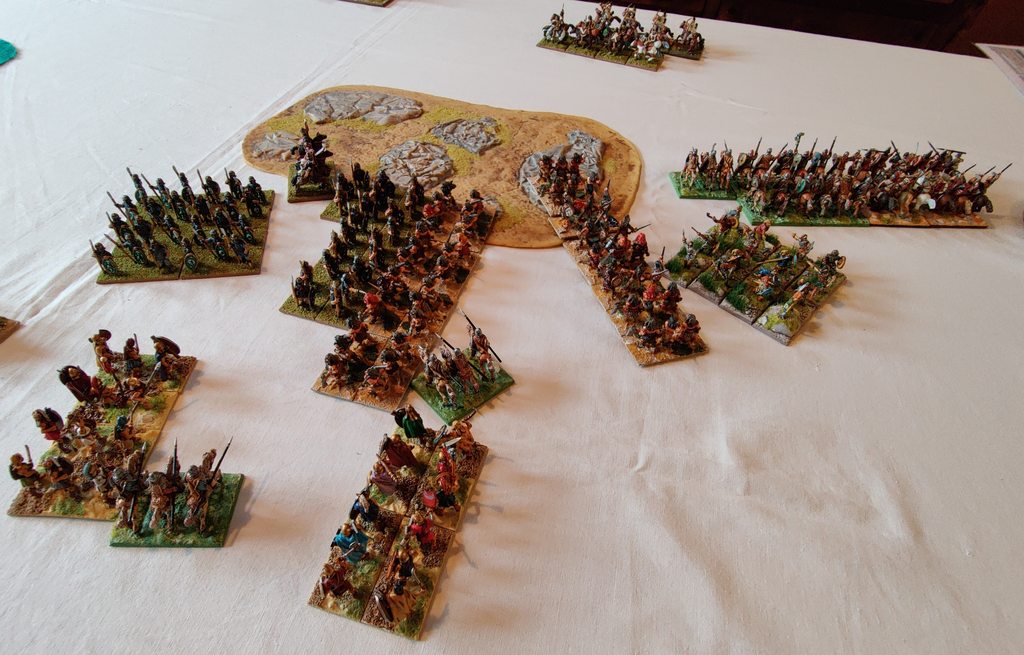 The Rebels manoeuver further to encircle the Roman Auxilia, but loose a base in the fight. 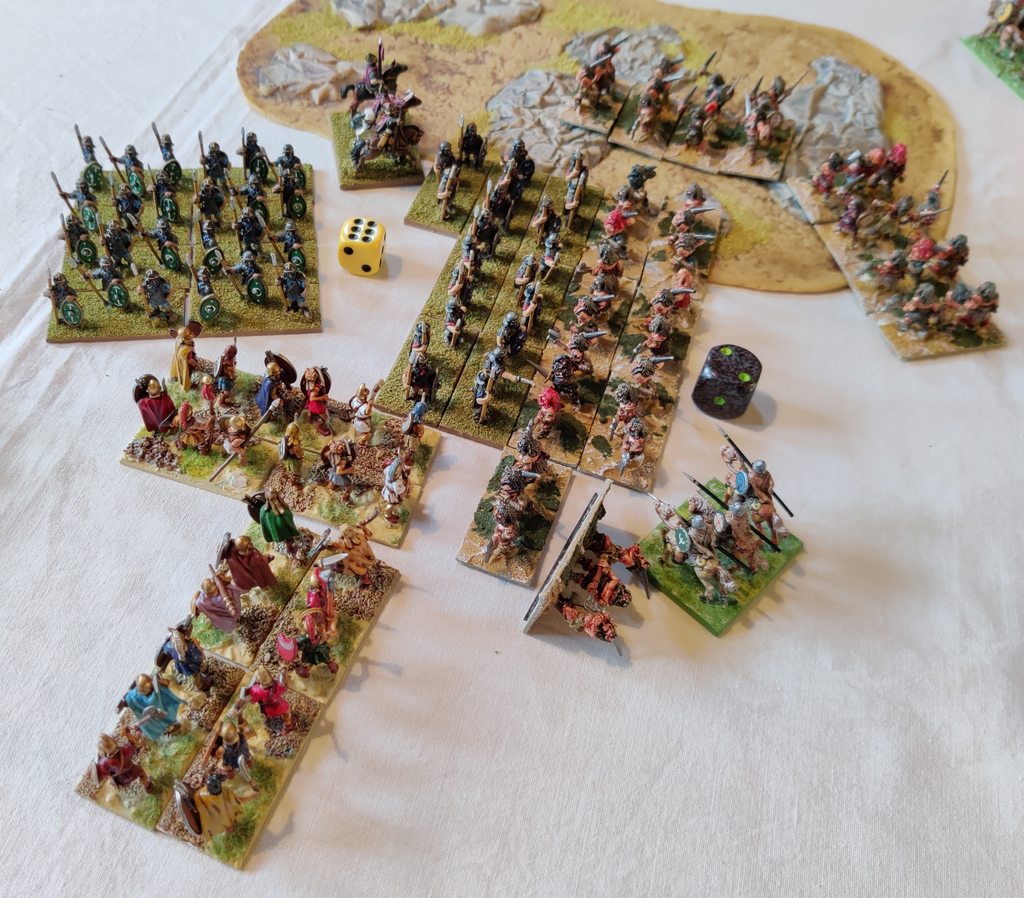 TURN 5 :
The Cherusci then break the opposing legion, and the rush of this barbarian horde causes the neighboring Sup legion to disrupt. All these legionaries are suspect of too much sympathy with the rebel cause and will be punished accordingly ! Elsewhere along the line, the Romans slowly get the upper hand. By Mars, we must win this battle !

On the right, the supporting green-shielded Auxilia charge their Rebel counterpart to avoid a flank charge on their blue-shielded comrades in arms. The Blues, however, loose the melee, fall to Disrupt and loose a second base. The Roman general is scratching his head in disbelieve : should our mail armour not give us the advantage over these half-naked savages ? The Greens look on very worried indeed. 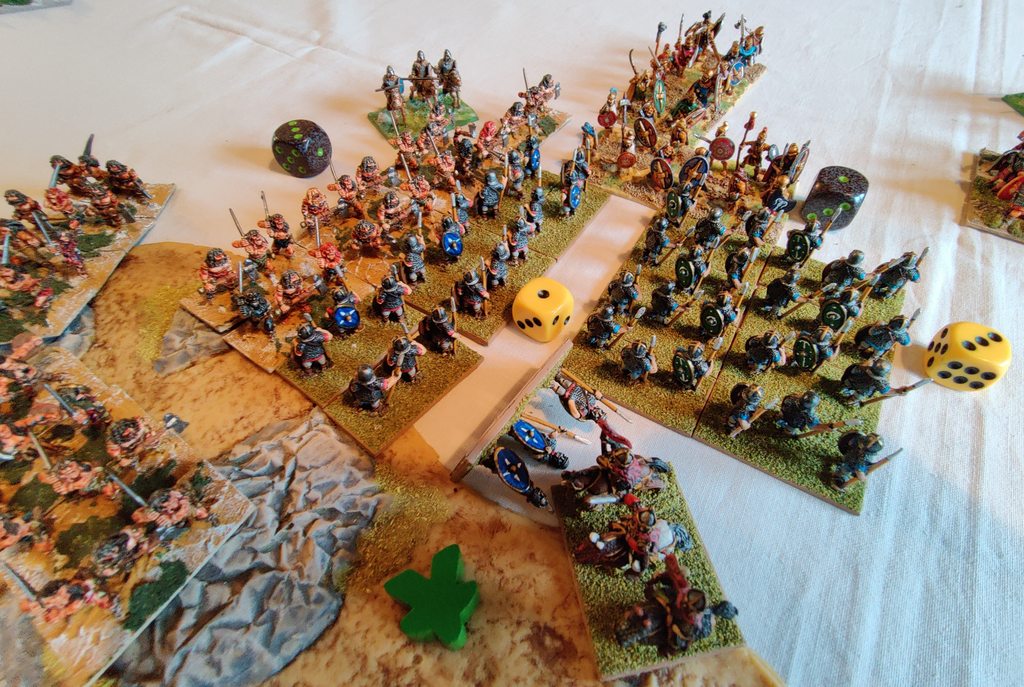 But haven’t we forgotten something ? What happened to the Sup Roman Cavalry advancing along the river ? Their General was confident his drilled, armoured cavalry would have the edge over their undrilled, protected Batavian opponents, not even speaking of his superb leadership. And after dispatching the Batavians, the Rebel camp loomed just ahead for sacking. Surely he could claim all the glory for this victory today having broken a third of the enemy army (4 AP out of 12) with his BG alone ! So off he charged ahead and … met with disaster ! O Apollon, why are you punishing me ? 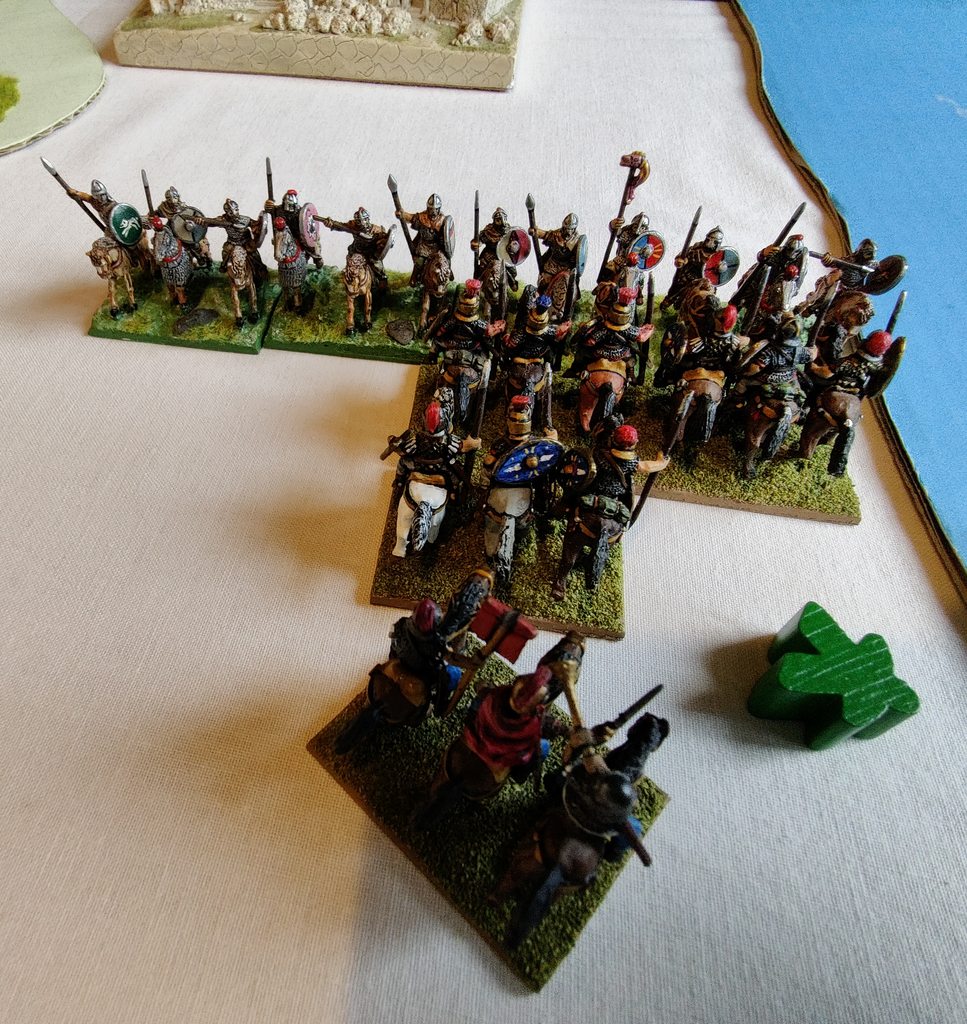 TURN 6 :
The Cherusci general shows a lot more discipline, breaks off the pursuit and charges the nearby Sup legion in the flank. Elsewhere along the line, the barbarians suffer, but still hold good.

The blue-shielded Roman Auxilia loose again and slip dangerously down the morale ladder. Their green-shielded comrades have to win decisively and fast, but make no progress. By Mercury, things are not looking good ! 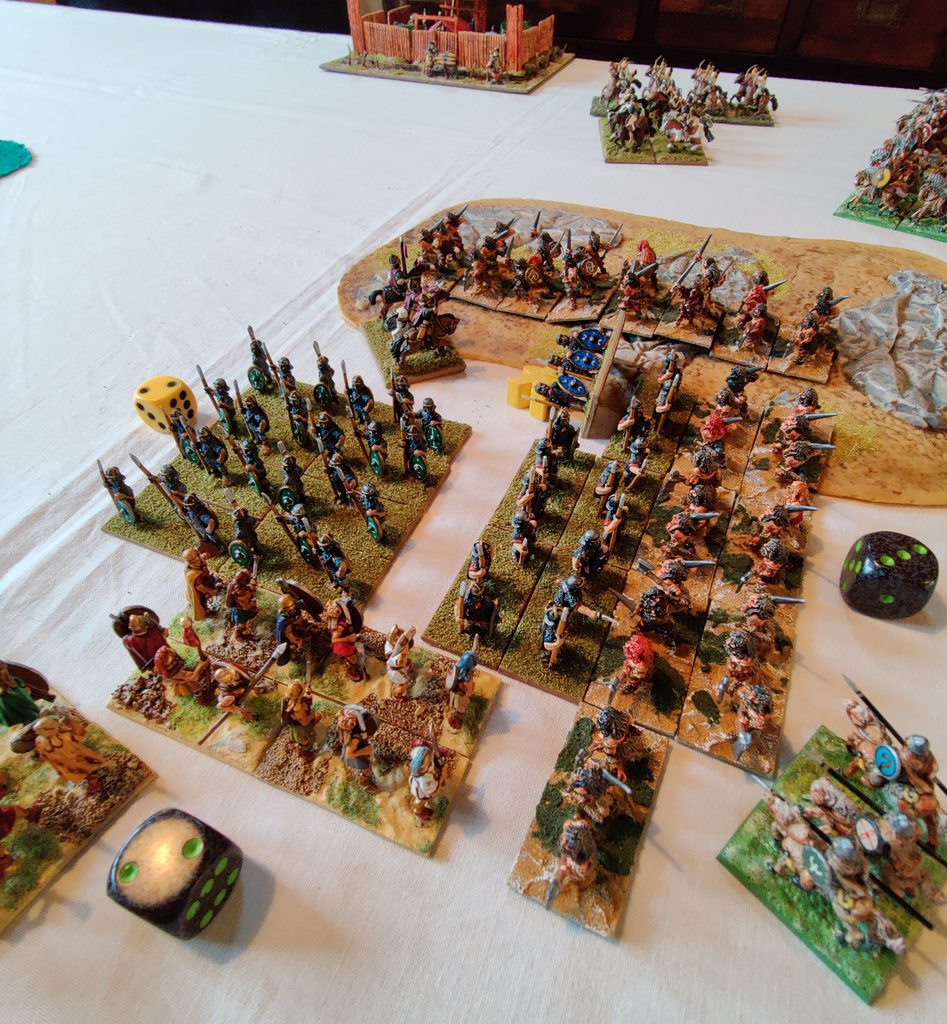 TURN 7 :
After a stout resistance, the Rebel warriors finally break in the center, but so does the Sup Roman Legion. 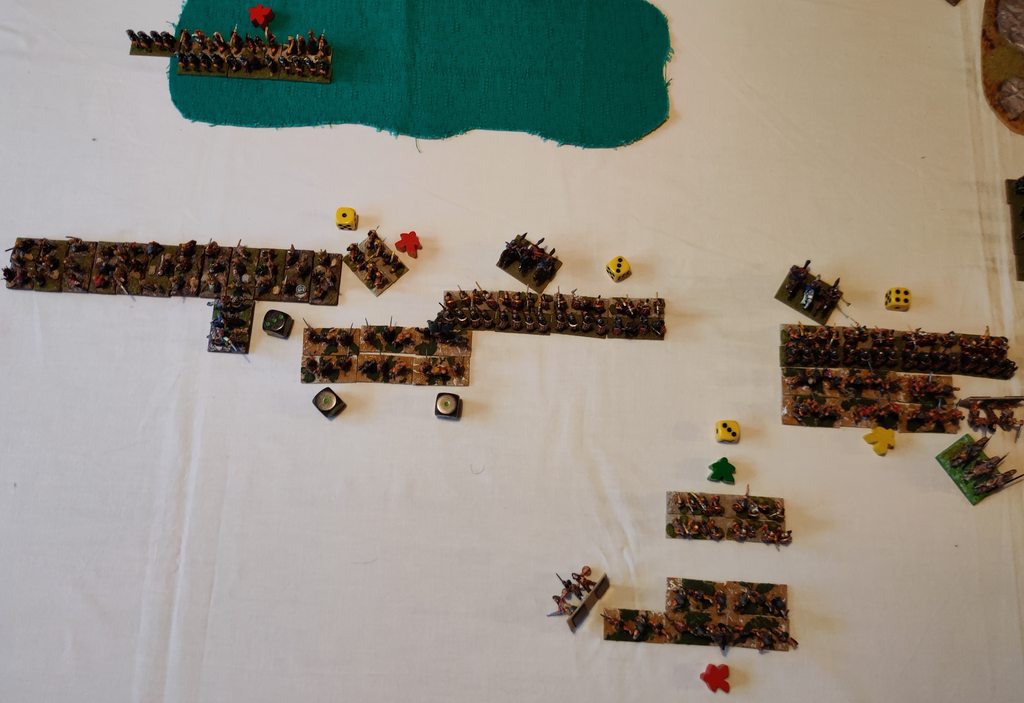 The Sup Roman cavalry recovers, however, and is getting the upper hand. 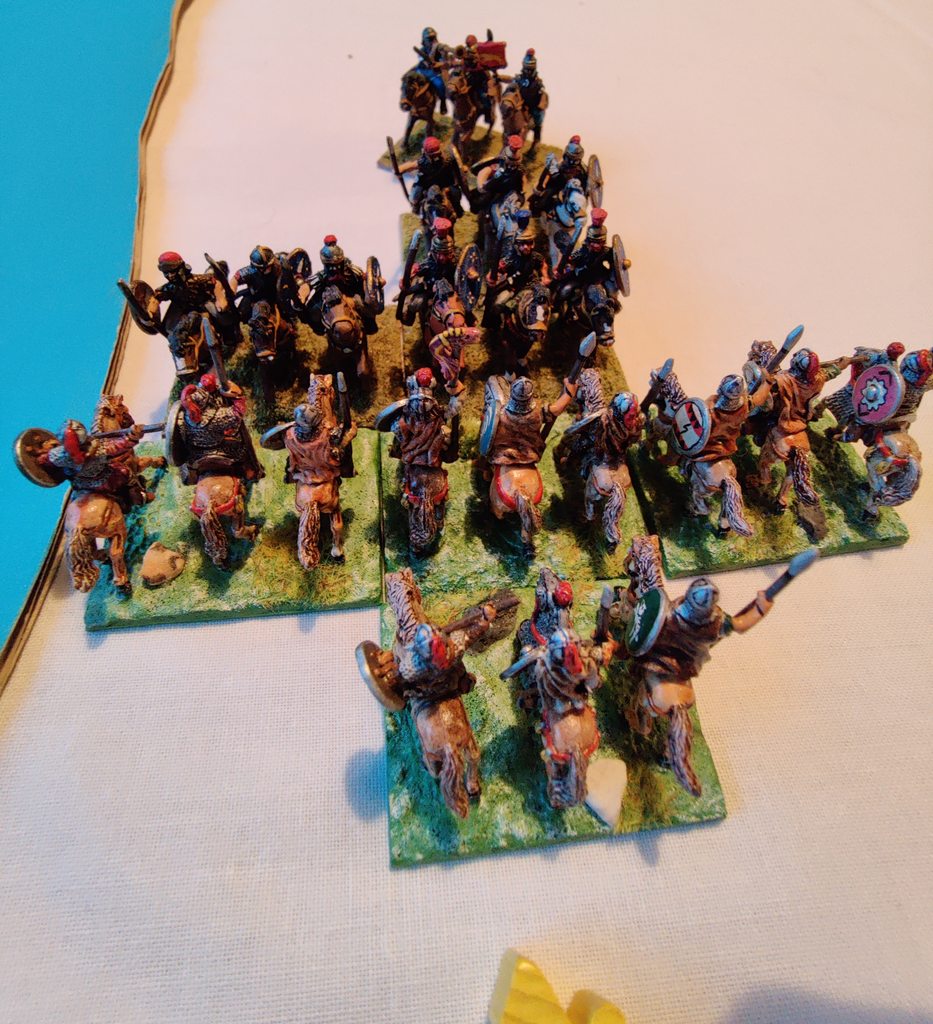 TURN 8 :
The fortunes of war lean one way, then the other. A second Rebel Warriors BG breaks in the center. On the right, the Blue Auxilia can hold no more : they break and rout through their Green comrades. The pursuing Batavians then fall on the Greens’ flank. For the Romans, abandoned by the Gods, the end is near. 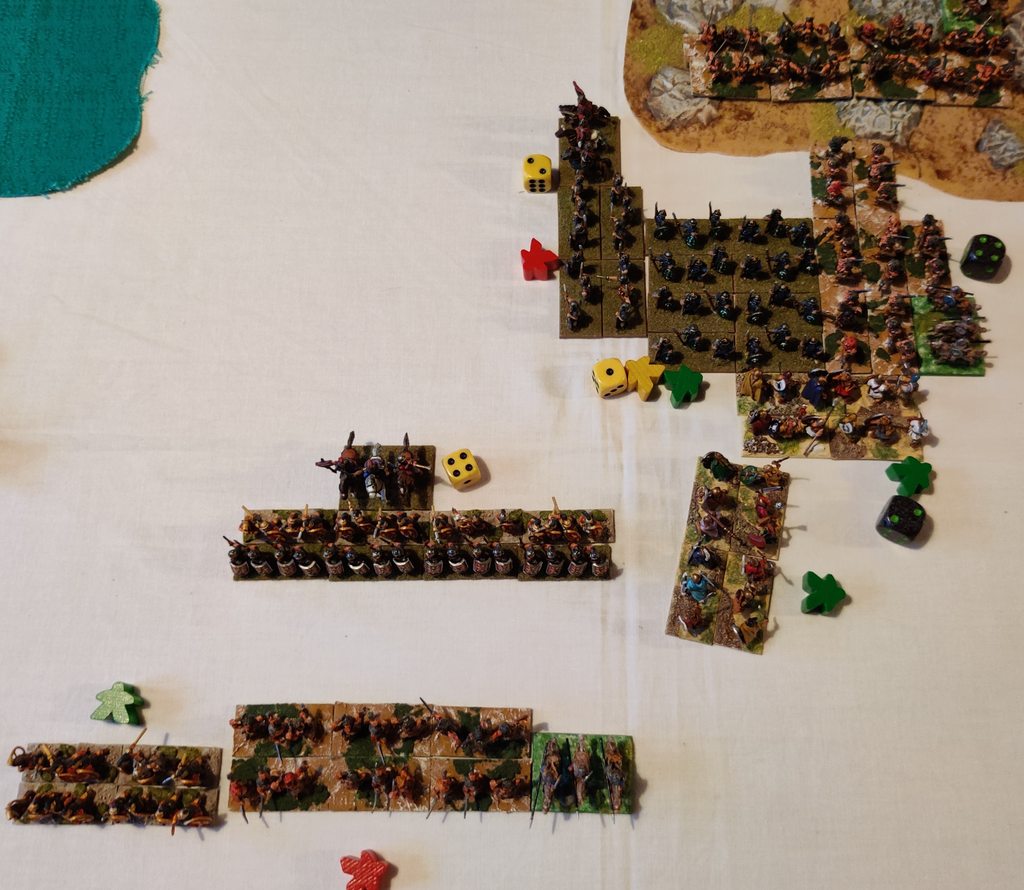 TURN 9 :
And there is the end for the Romans : the surviving Avg legion on the left gets crushed like in a vice between the victorious Cherusci and the Batavians, and on the right, the Green Auxilia breaks as well. 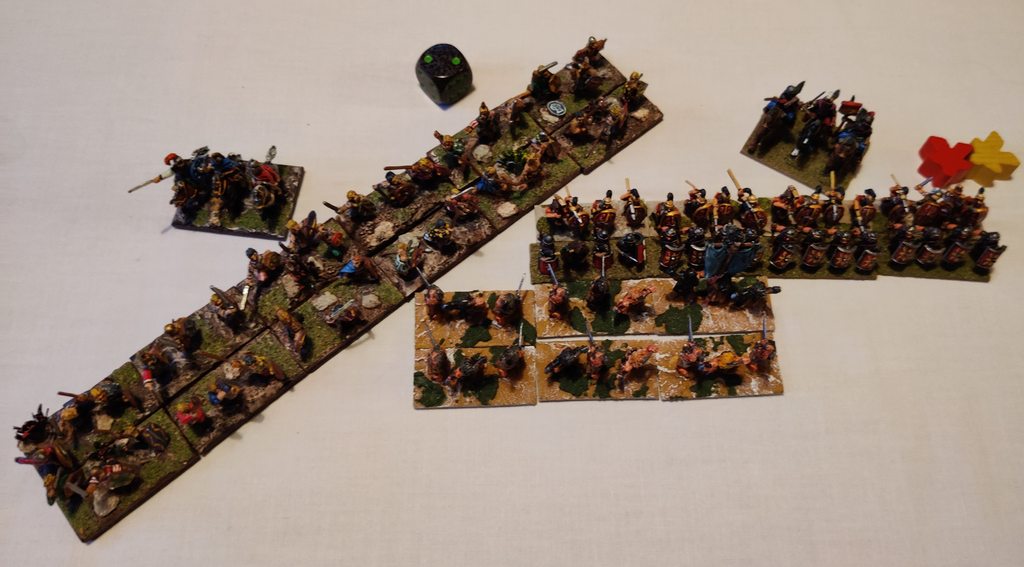 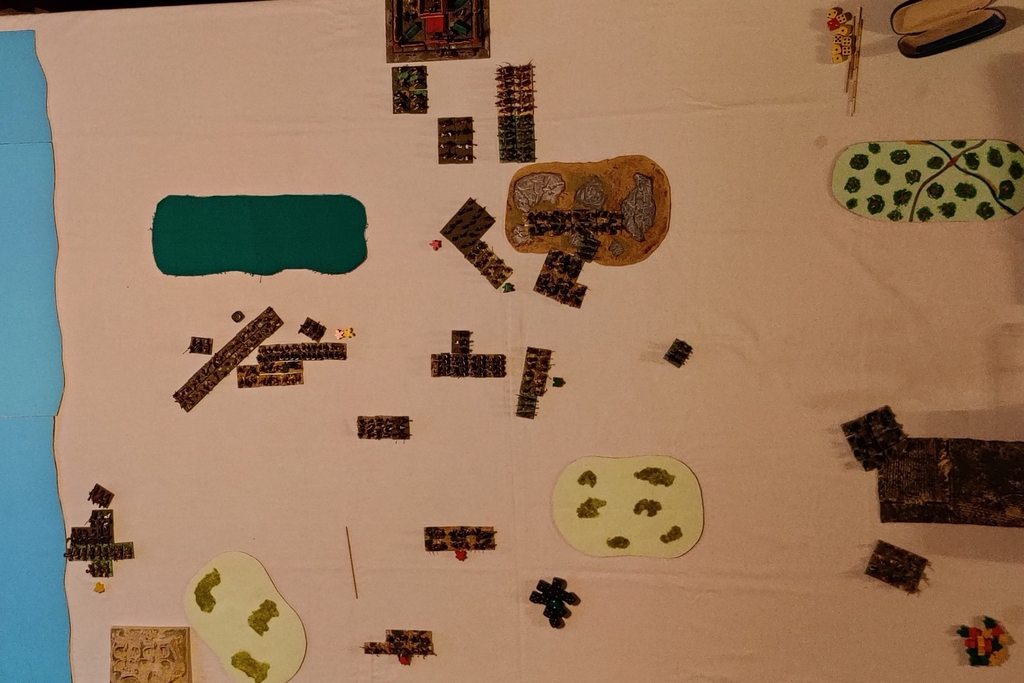 
AFTERMATH :
The Roman commander-in-chief put all blame for the shameful defeat on the cavalry general. He should have fought the Cherusci alongside the Legionaries instead of pursuing his own dreams of glory. 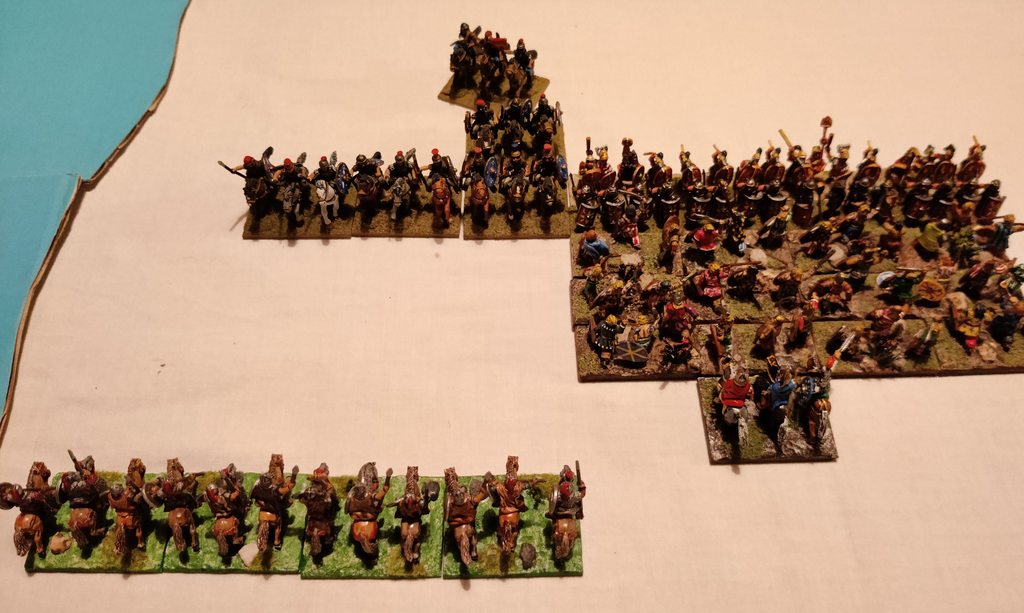 Menacing the flank of the Cherusci might have been a gamble, because the Roman Cavalry would end up exposing its own flank to the Batavian Cavalry, and this could result in the Batavians running loose on the Roman rear. 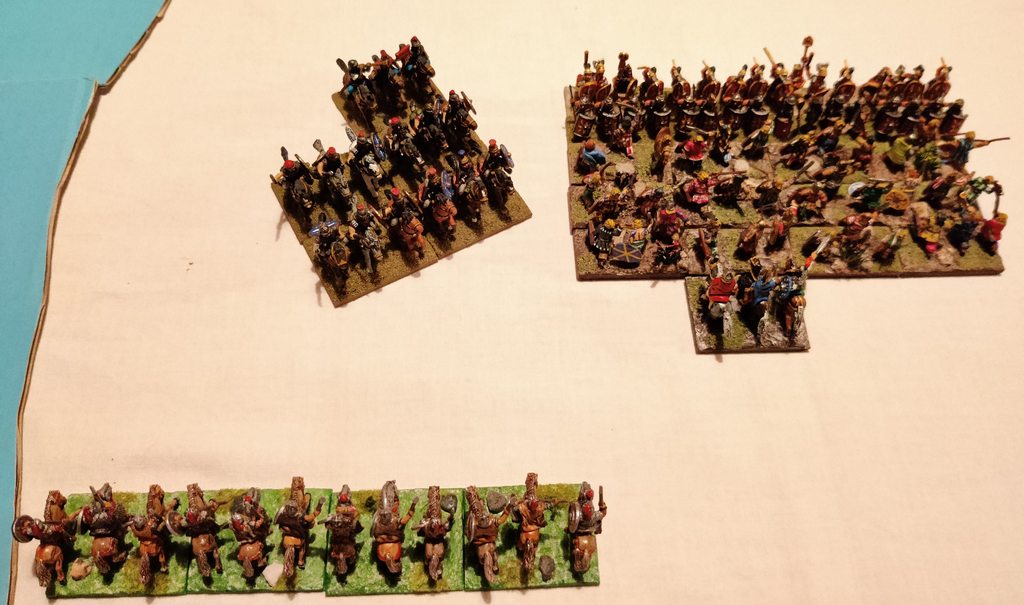 At the very least, the Roman cavalry should have charged its opponent in line in order to maximize the benefits from its general during the risky impact phase. 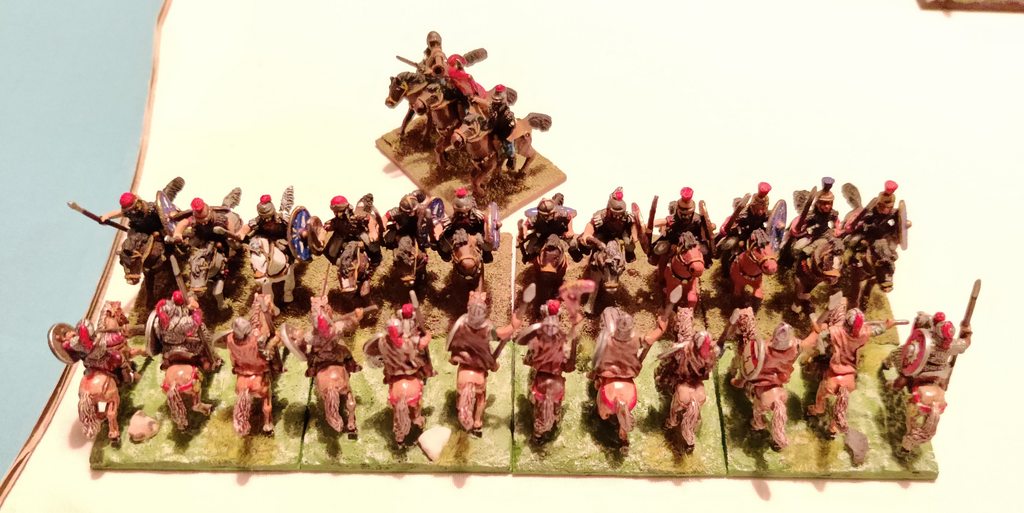 HISTORICAL AFTERMATH :
Vocula, the Roman C-in-C, was slain in his tent, and the 4 legions of this fictive battle soon joined Civilis, as did all the other Rhine legions (except for the 5th Alaudae and the 15th Primigenia, which were massacred at Vetera), as well as all the Germanic auxiliary detachments, and various Germanic and Gaul tribes. The new aim of the revolt was now the creation of an Empire of Gaul.
But the Roman Empire was not yet ready for collapse. Under Quintius Petilius Cerialis, the Romans turned the tide and Civilis surrendered the next year after a long fight. The 4 turncoat legions of this scenario were all abolished.

For a detailed account of the Civilis Rebellion, I refer to : Legions of Rome, by Stephen Dando-Collins.


Thank you for reading this report to the end.
More pictures of some of the miniatures on my blog : www.tituspullo.over-blog.com
Top

Re: The Civilis Rebellion : Battle Report

Re: The Civilis Rebellion : Battle Report

Nice, up the revolution
phil
putting the arg into argumentative
Top
Post Reply
3 posts • Page 1 of 1