Drama on the Hydaspes : A Battle Report

Drama on the Hydaspes : A Battle Report

May 326 BC. Alexander has outmaneuvered Porus and managed to cross the Hydaspes with the larger part of his army despite being shadowed by the Indians. The 2 armies now face each other along the river banks.

Special scenario rule :
This being the first battle in which Westerners faced elephants, all Macedonian battle troops fall to Disrupt whenever they come to within a distance of 2 bases from Indian elephants. They cannot be rallied. However, if a battle group kills an elephant it automatically resumes its normal status (and this special rule does not affect it anymore). Ha ha ! Not so sure the Macedonians are still the favourites !

ARMY DEPLOYMENTS :
The Macedonians : from right to left
Alexander cannot hope to match the Indians’ frontage, so he deployed his infantry in front of his camp, closing the door towards the river. All the cavalry is deployed, under his personal command, far out in the open plain. It will have to act independently and avoid the elephants at all costs.

Pikemen, Thracians and more pikemen near the river bank, with the Cretan and Macedonian archers skirmishing in front.

The whole pike phalanx in the center, with a second group of Thracians holding the left flank, together with the Agrianians. The Hypaspists are those with the larger, decorated shields in the middle.

The 4 cavalry BG on the far left, with Alexander commanding the Agema.
The single base in the plantation to the rear is an ambush marker, indicating the position of the third group of Thracians. 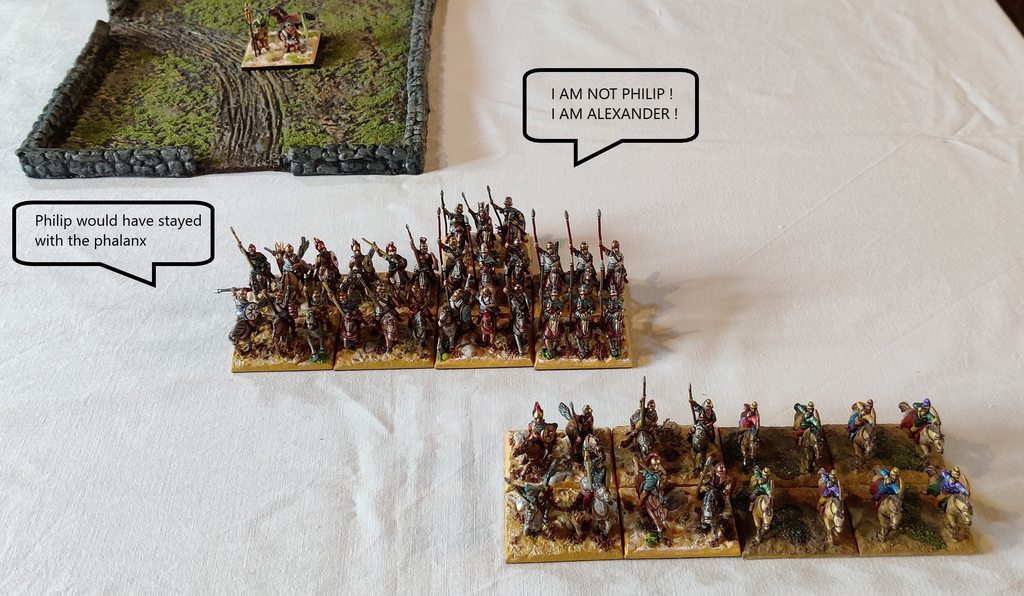 This third group of Thracians was intended to provide rear support to the pikemen, especially in their first confrontation with the elephants, but at the last moment Alexander ordered them to hide in this plantation behind the cavalry. Maybe they could catch the Indians in the back once they’ve swung around in the wide gap between the Macedonian infantry and the cavalry.

The Indians : from left to right
Porus deployed his elephants and his archers more or less evenly along the line. The chariots are in the plain on his right, and the ally near the river bank.

The Indian ally, with a column of archers and a BG of cavalry in support.

The Indian center, with the archers in firing position, the LS/SW on the right and the clubmen between the elephants.

Finally, the heavy chariots out in the open, on the far right.

Bird-eye view of the starting positions. The terrain in the middle is an open field, and somehow directed the Macedonian deployment. The other terrain pieces would play no role in the battle. 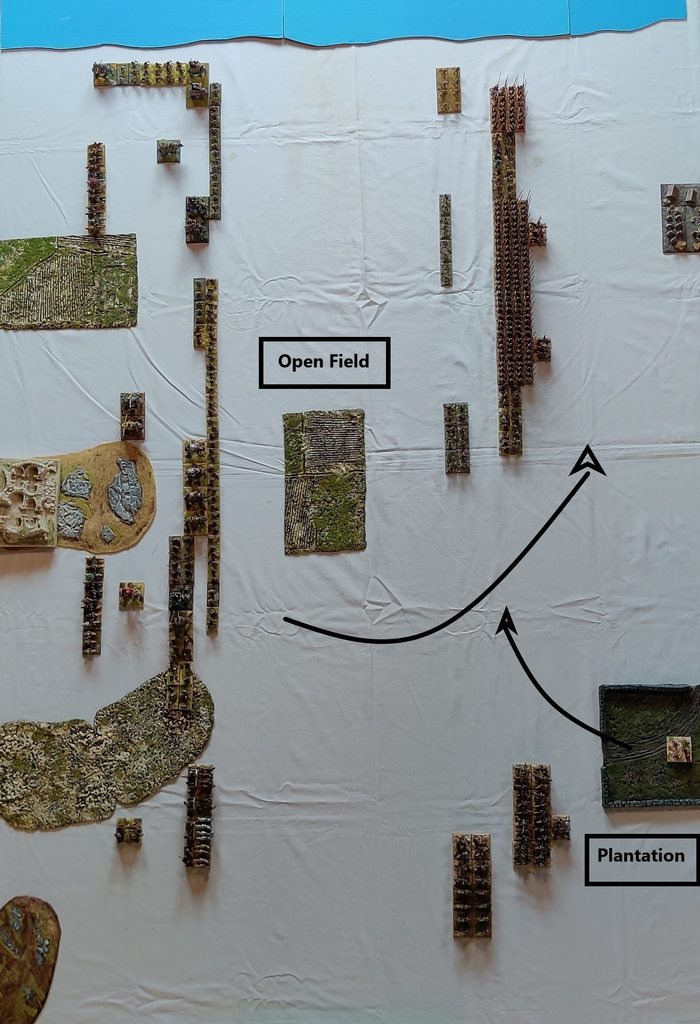 TURNS 1 – 2 :
The Indians first advanced along the whole line, then reshuffled on their left.
The Macedonian phalanx split in 2, with the right group advancing towards the elephants, and the left group moving away from the open field where the elephants would threaten their flank. The Thracians on the right figured they had better odds against the archers in the middle than against the elephants along the river. The second Thracian BG also moved closer to the pikemen. The Cretan archers block any deployment in line of the Indian archers, but they had something entirely different in mind ! 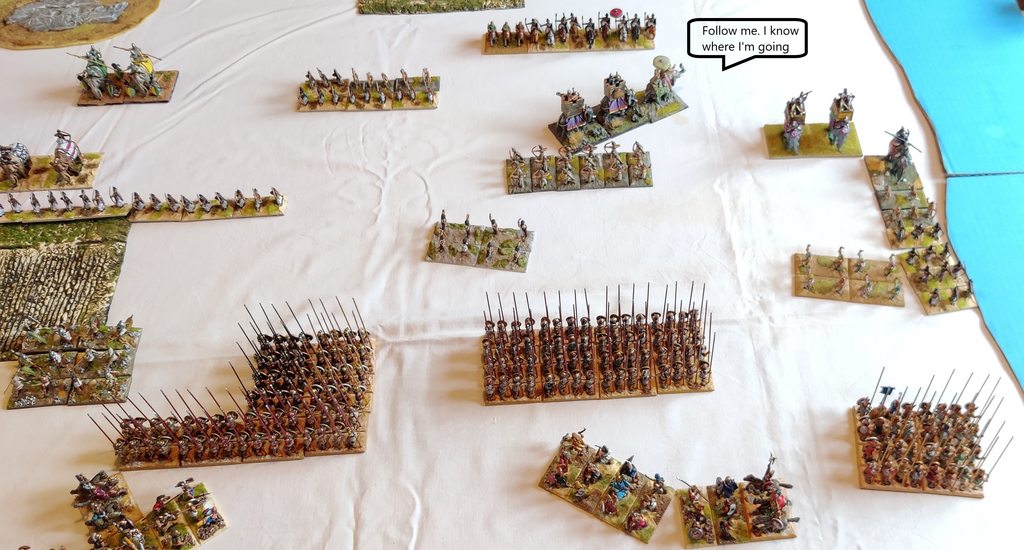 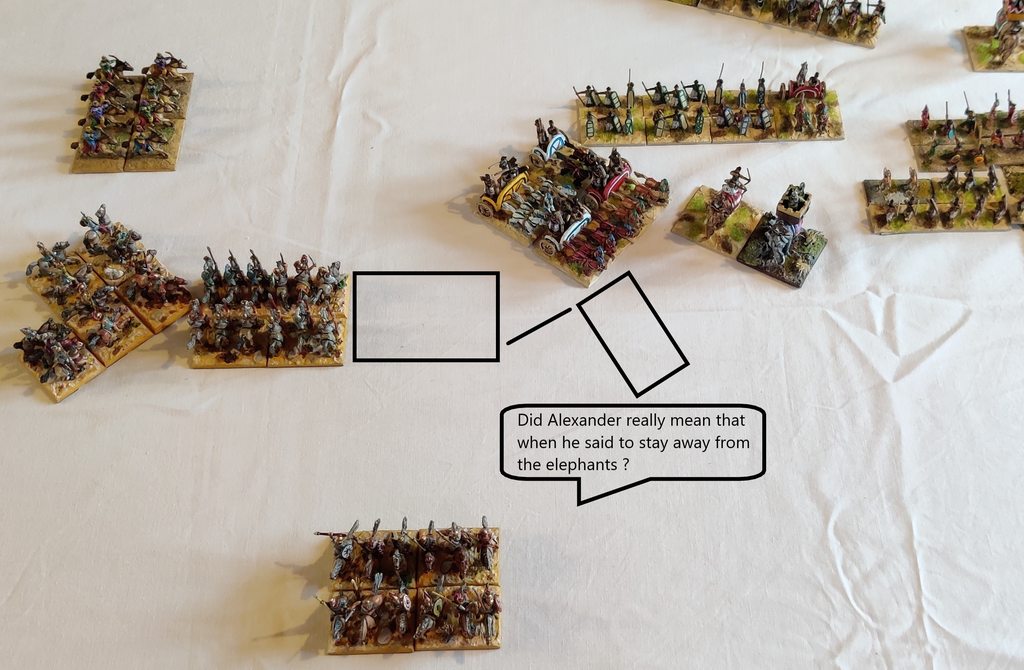 TURN 3 :
The Indian archers along the river are now in such a position that a flank charge is impossible. And the elephants will take in the flank anyone attacking the archers. A well-rehearsed maneuver ! With their numerical superiority, the Indian archers chase away their Cretan counterparts. 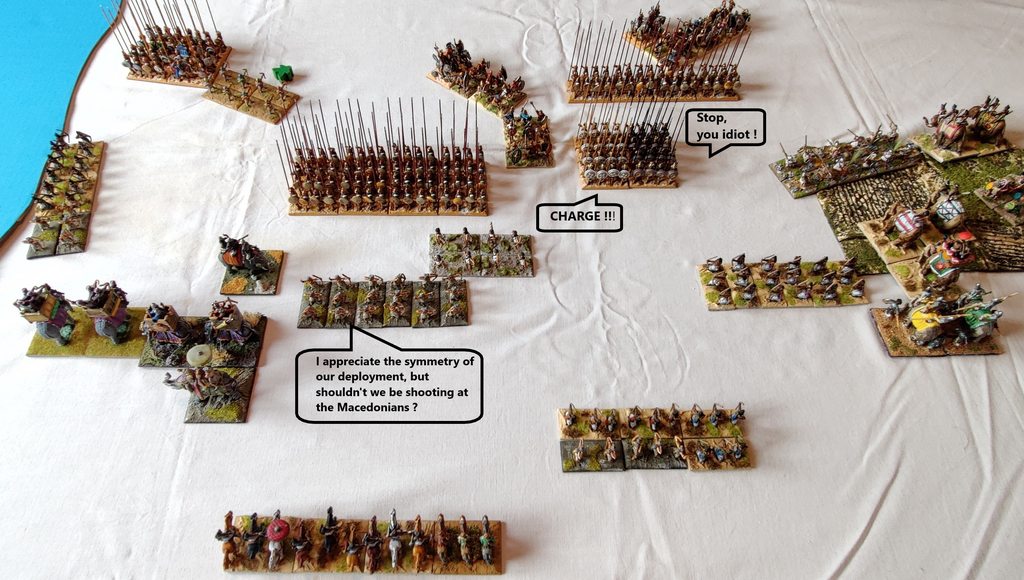 The Hypaspists were going to advance further until a little voice advised them to stay out of (impetuous) charge range of the archers in column, with the second group of archers looming to take them in the flank ! Another one of those Indian tricks ! 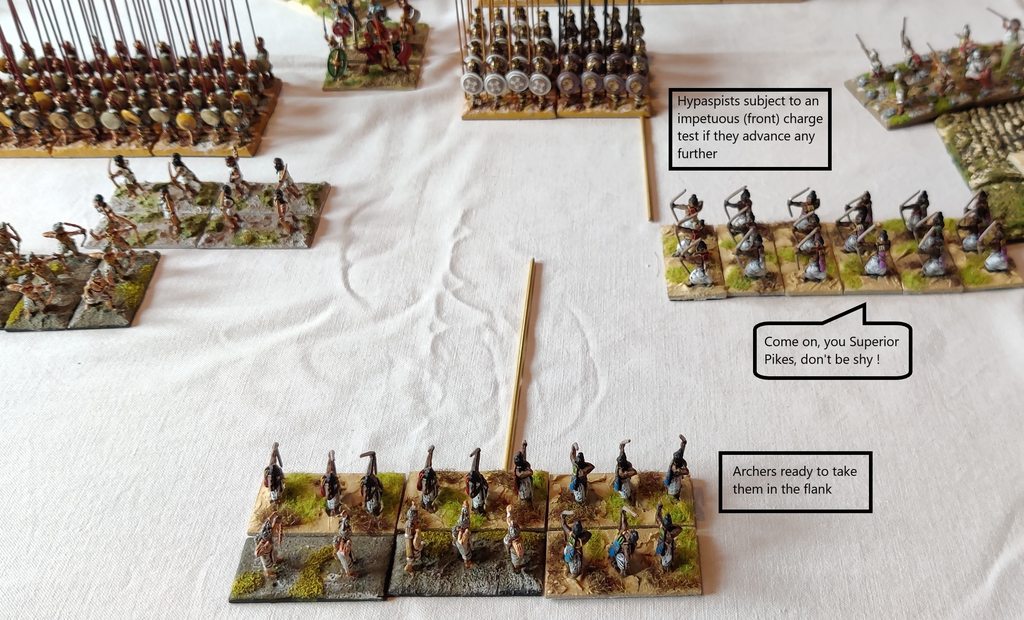 Here, the Thracians advance between the Hypaspists and the regular pikemen.

Here, the fearless Agrianians hurl their javelins at the mighty Indian elephants !

On the right, the Macedonian cavalry continues its encircling movement, while the Companions get away from the elephants. 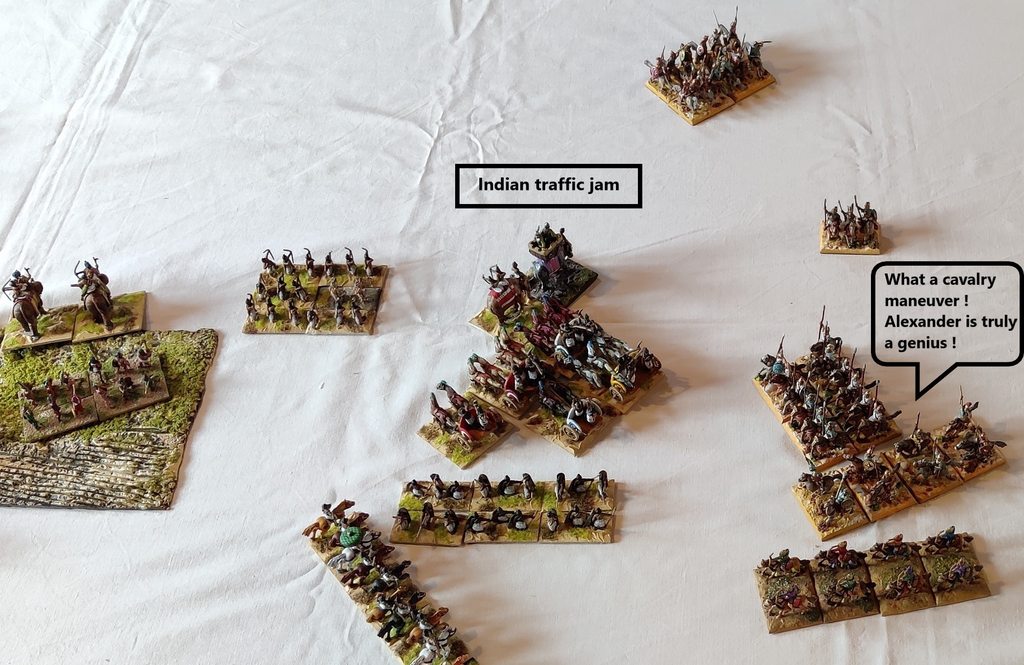 TURN 4 :
The pikemen along the river now think it save to attack the Indian archers, failing to spot the oncoming elephants in column. The second group of pikemen turns 90° to confront the elephants in line, but take a special blue Disrupt marker for being near the pachyderms. Meanwhile, the third group of pikemen blocks the archers.
The Thracians must take care of the archers in the rear, and so lift the threat on the Hypaspists.

The Agrianians failed to make any effect on the elephants. The pikemen and the other Thracians can’t escape a confrontation with the behemoths… 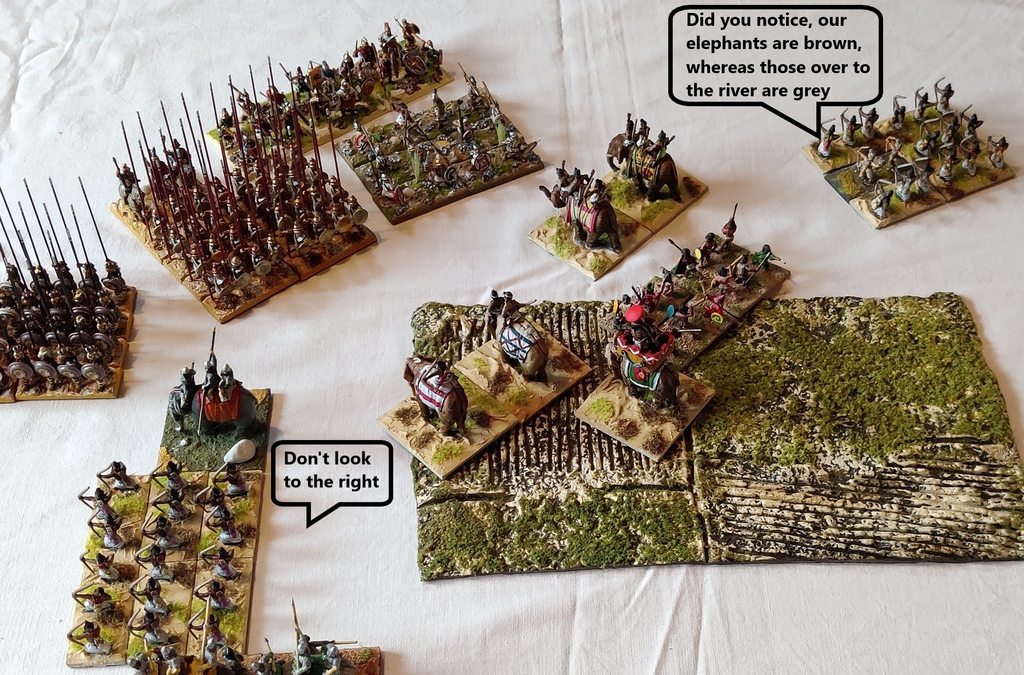 On the cavalry side, the chariots turned 180° on the spot (Alexander is still wondering how the hell they managed that !), and the Agema charged in, with Alexander at the front in typical Hellenistic reckless fashion ! The light horse prevent the Indian infantry from deploying and at the same time take a shot at the Indian cavalry. Disrupt markers are distributed to both sides. Only Alexander’s inspiration (+2) saves the Elite Agema from falling to Fragmented (7 – 1 – 1)! 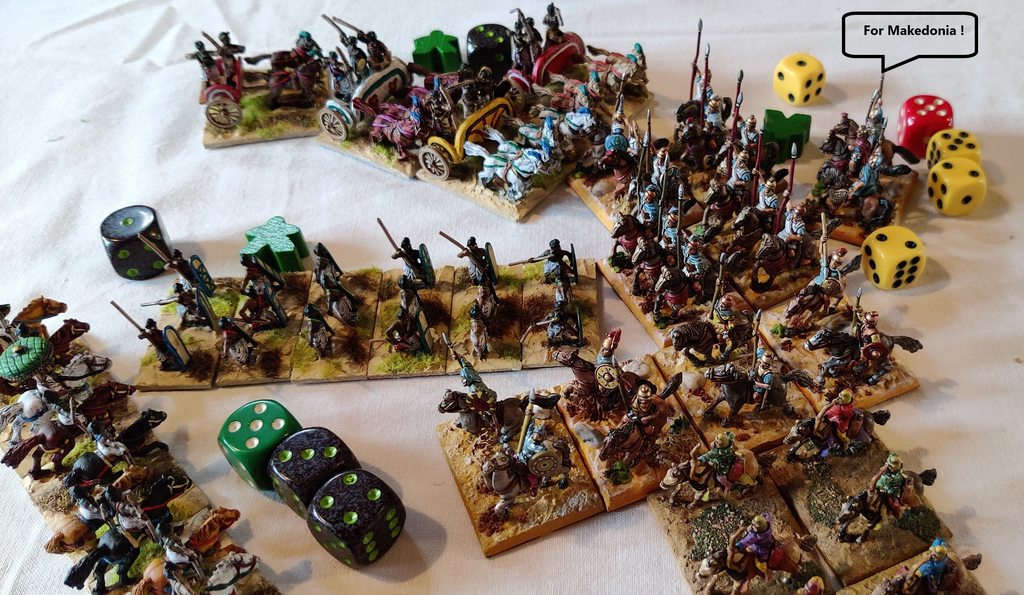 TURN 5 :
Breakthrough along the river ! The Macedonians compensate skill with luck and kill an elephant group ! Their blue Disrupt marker is removed forever as this unit has overcome their fear of elephants. In their pursuit, they will now resolutely attack the second group of elephants. Their comrades on the river bank would otherwise have been in dire straits… 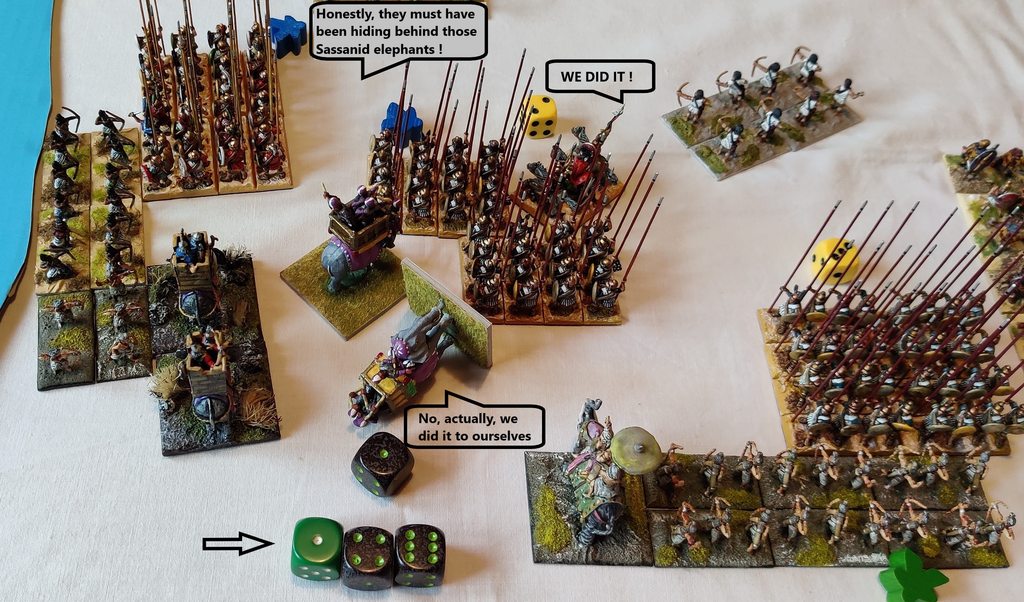 Here a view of the pikemen pushing the archers into the river, blissfully unaware of the elephant flank charge !

Towards the center, the Macedonian infantry all pick up special blue Disrupt markers because of the oncoming elephants. The Hypaspists charge in and loose the first combat, but the Macedonians are still floating in a sea of luck !
However, further up, the Thracians were crushed by the elephants, and the neighboring pikemen promptly fell to Fragmented. 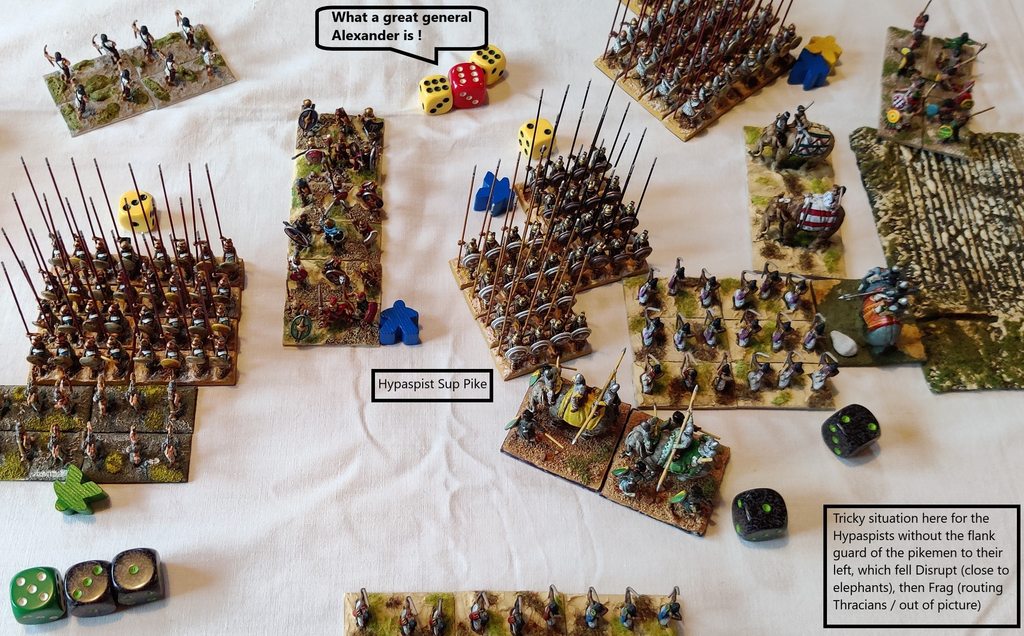 The column of Thracians had no room to expand and ignored the orders to turn 90°, so they advanced, only to be shot to Fragmented. The Hypaspists lost again, and this time Lady Luck deserted them. Even the third group of pikemen could make no headway against their archer opponents. 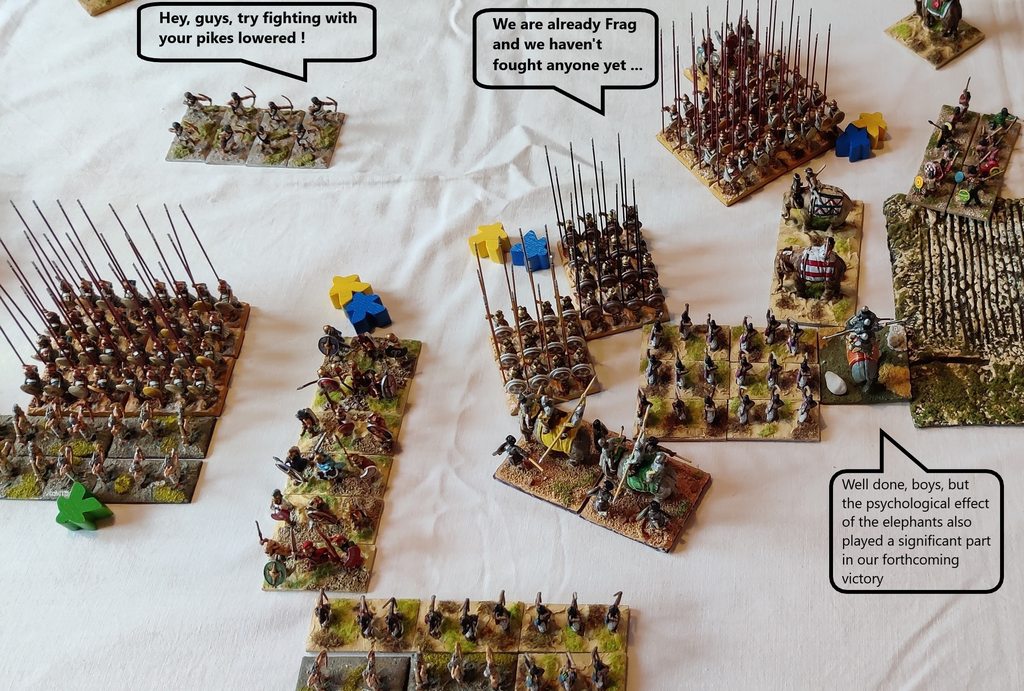 More success on the cavalry wing ! The Indian infantry routed and passed through their own cavalry (which had repeatedly refused to obey orders). The Agema and the chariots are still fighting toe to toe. 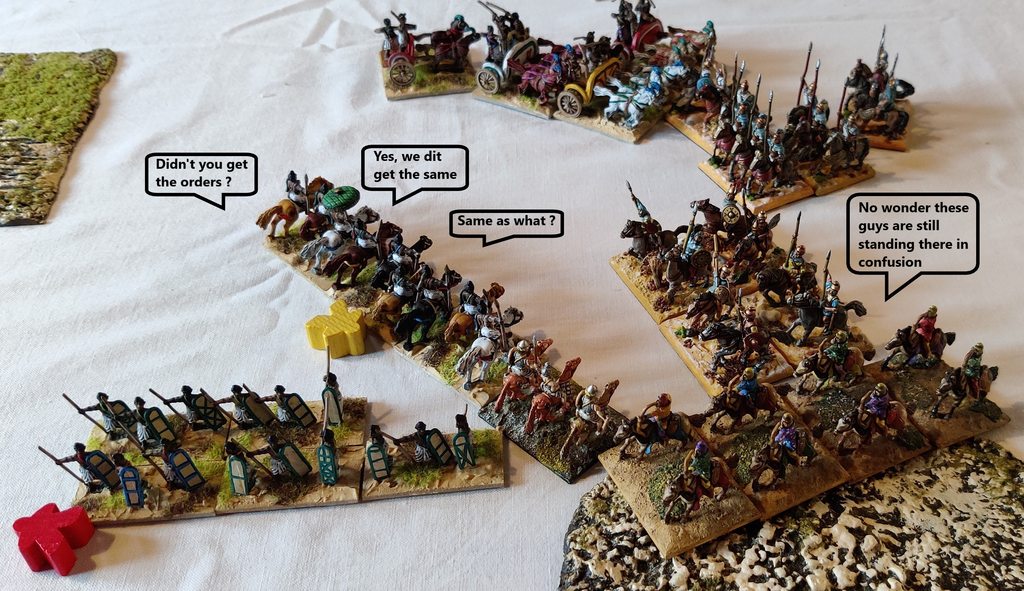 TURN 6 :
The Elephant Killer unit caught the next group of elephants in the flank and beat them again in combat (no more scenario penalty !). Their right hand side comrades also make progress against the archers. 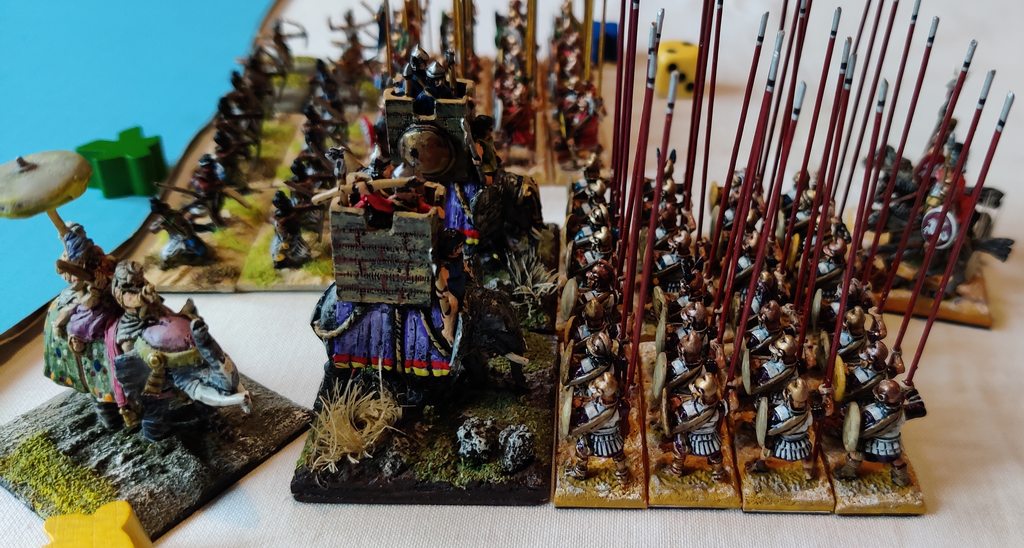 In the center, the pikemen (rallied back to Disrupt) are now fighting with double overlap of elephants and clubmen, but still hold their own in true Macedonian style. Not so the Hypaspists, who are routing shamefully. Does it not often turn out that your supposedly best troops are the first to let you down ?

Then the unimaginable happened ! The Agema lost against the chariots and a well-aimed arrow hit Mega Alexandros in the eye ! The charismatic leader died fighting among his best warriors. Drama on the Hydaspes ! Naturally, the Agema lost heart and would soon flee from the battlefield. 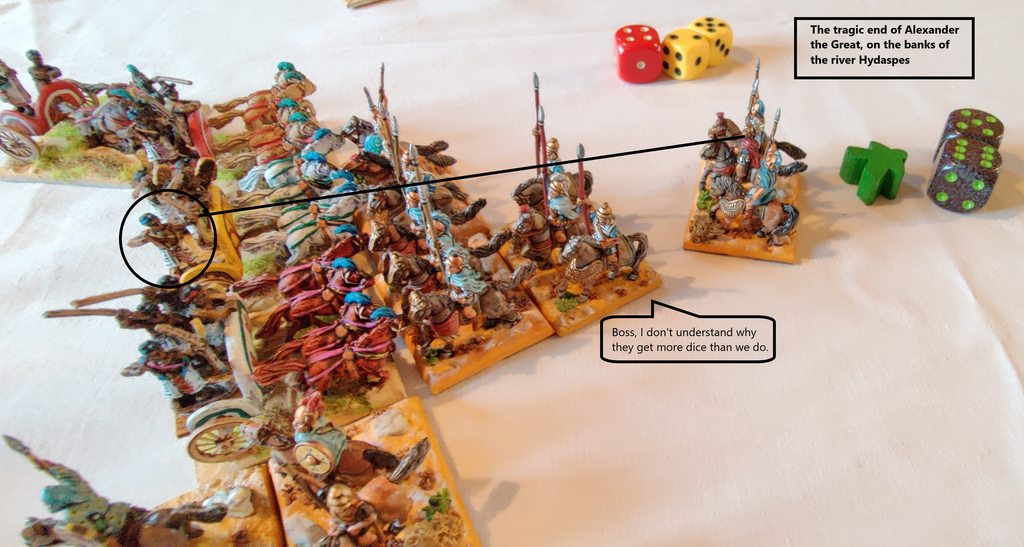 Alexander’s death caused some disruption among the Light Horse, which extracted revenge by eagerly pursuing the routing Indians. 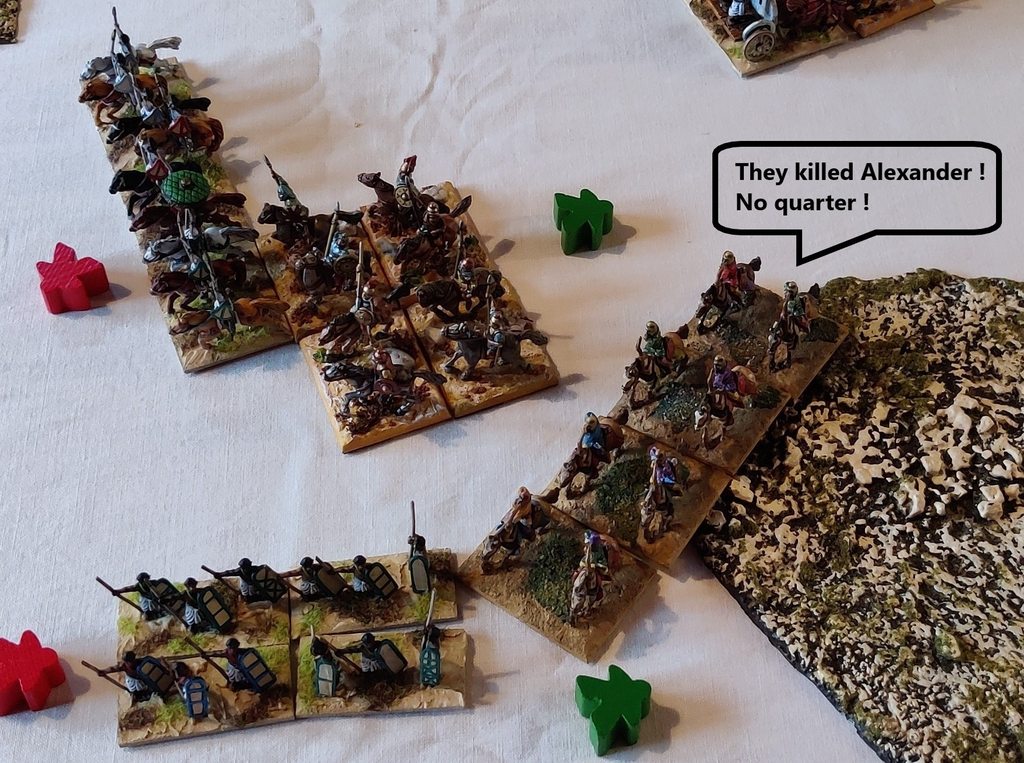 Scoreline at this turning moment :
Macedonians : lost 7/13
Indians : lost 8/16
Elsewhere on the battlefield, the Companion cavalry that moved away from the elephants is rejoining the fray in the center, while the elephant group that destroyed a unit of Thracians is taking a beeline towards the Macedonian camp. 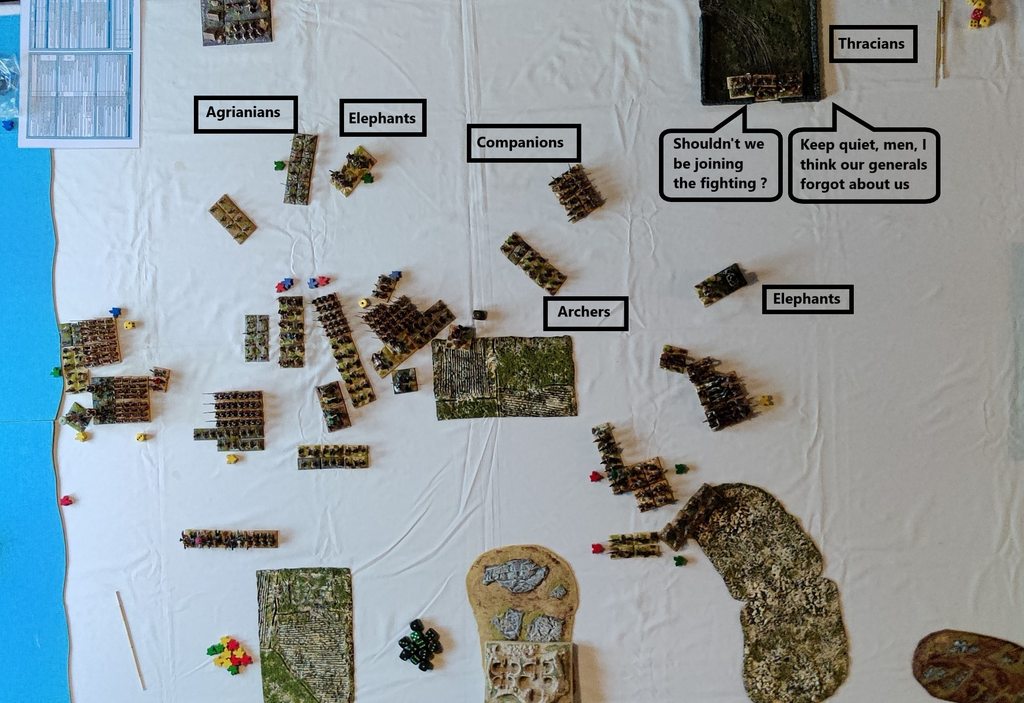 TURN 7 :
The Elephant Killers, having already smelled blood, dispatch their second BG of pachyderms, while the other 2 pikemen BG also win against their archer opponents. The Indian cavalry couldn’t remember how to get out of the way and is going to be passed through by the fleeing archers. 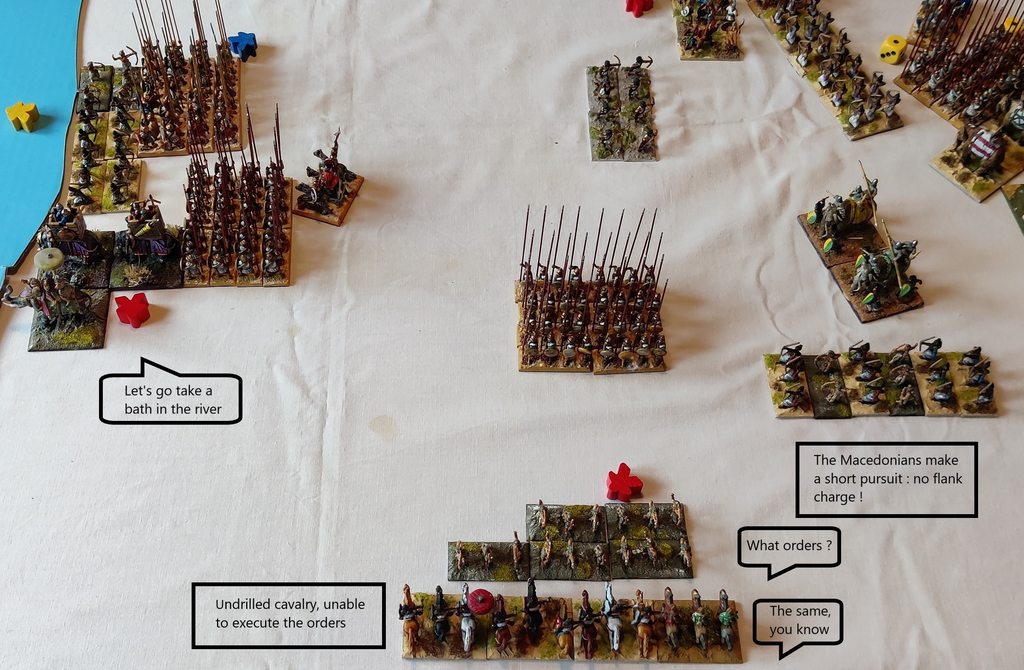 The Companion cavalry emerge out of nowhere and hit a column of archers in the flank. Ouch ! Double-dropping in the melee, the archers immediately rout ! Porus is sourly regretting the lack of drill of his Indians. His army is now on the verge of collapse. 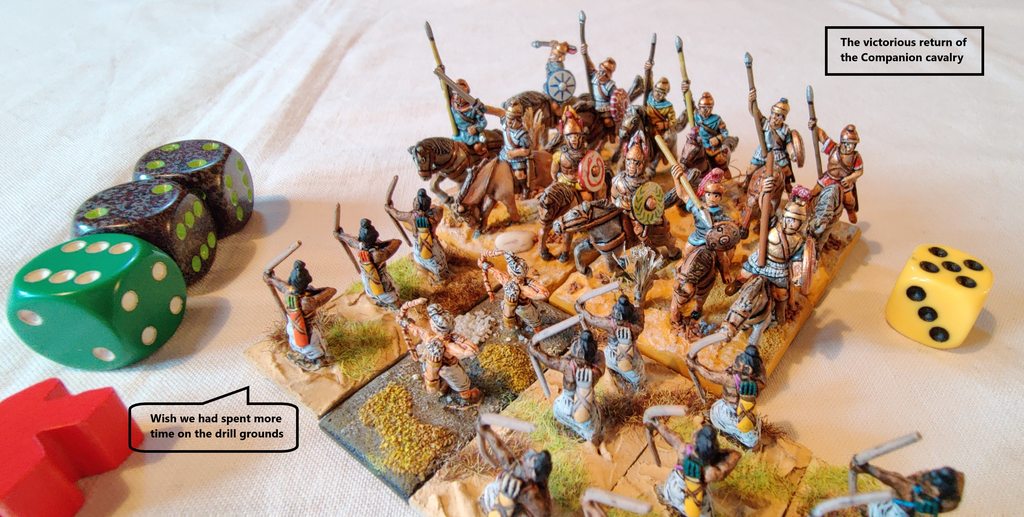 And there it is : the pursuing Companions hit the clubmen in the flank, and after the melee, this unit completes the rout of the Indian army. 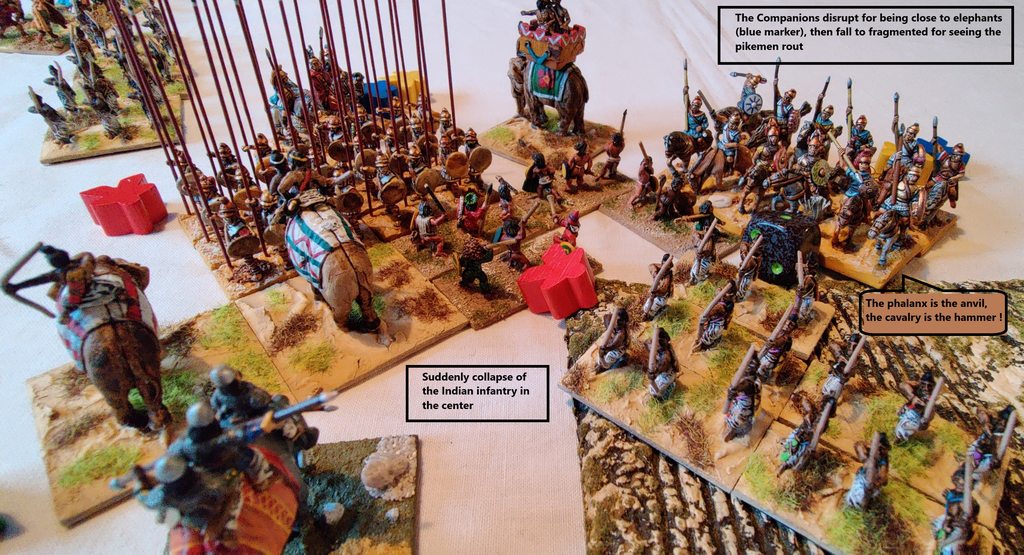 Final scoreline :
Macedonians : lost 11/13
Indians : lost 16/16
However, both sides are about to take the enemy camp, and with the Indians playing next the victory of the Companions came truly in the nick of time !
Final Game Position : 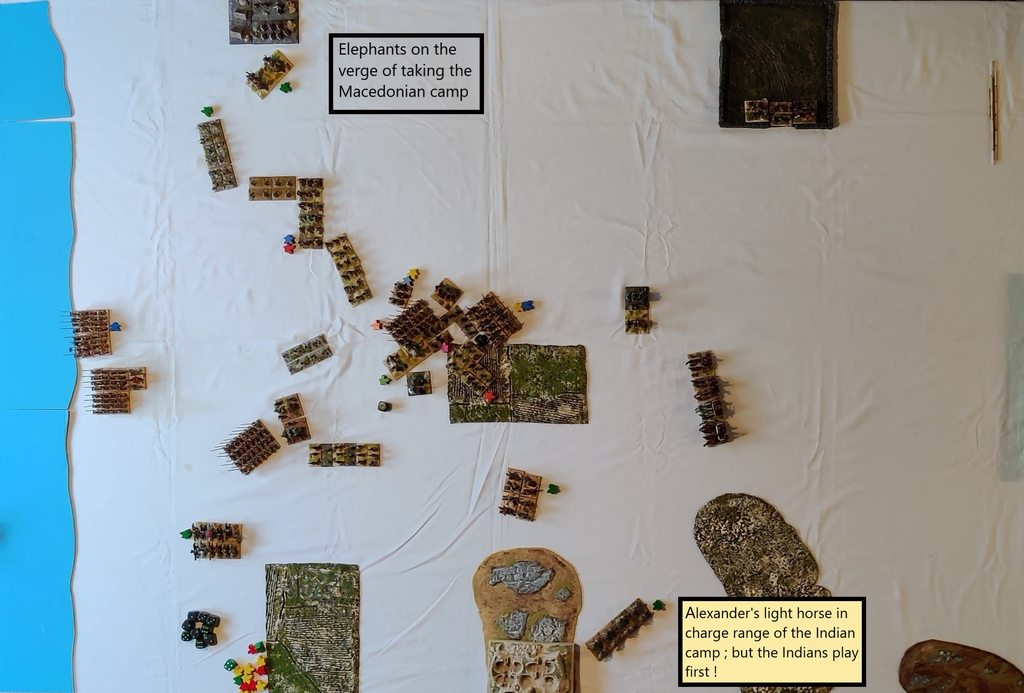 CONCLUSION AND COMMENTS :
In hindsight, the special scenario rule seems too harsh. The Disrupt status should have been applied only when actually fighting elephants. Nevertheless, the battle had a good feel to it, with the Macedonian pikemen struggling mightily against the Indian elephants.
Porus displayed a lot of skills in maneuvering an undrilled army and engineered several traps for the Macedonians. Luckily, Alexander was able to restrain his pikemen from charging impetuously. The killing of the first elephant was a key moment in the battle, as was the successful return of the Companions (a move paralleled in the historical event). The Indian chariots proved also very strong, and it is strange that they had so little effect in the real battle.


Porus and his Indians lost the battle, but earned Alexander’s respect. The Indian dead will be honoured and anybody trying to interfere will be chased away ! 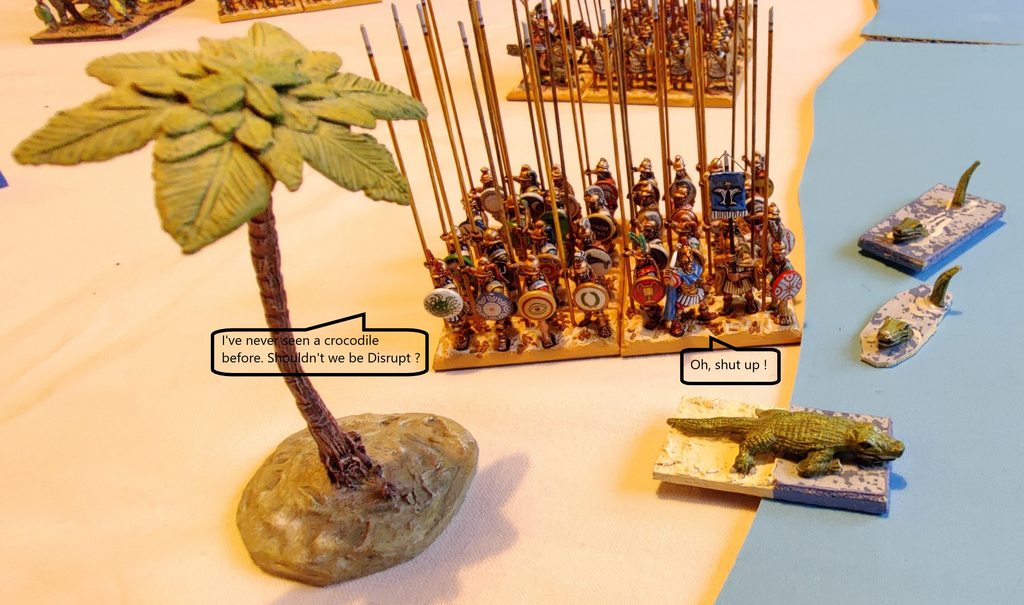 Thanks for reading and Happy New Year to everyone !
More pictures of the minis on my blog : www.tituspullo.over-blog.com
Top

Liked the use of the special rule, maybe use it only when in contact rather than only when fighting. Will improve the chances of any Indians adjacent
Nice report, thank you
phil
putting the arg into argumentative
Top