The Devil's Horsemen : A Battle Report

The Devil's Horsemen : A Battle Report 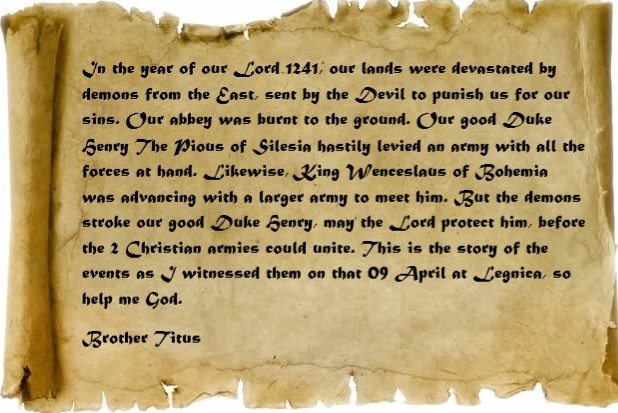 1. All Polish sub-commanders have allied status.
2. The Mongols have 2 Field Commanders, and these may not fight.
3. The feigned retreat : to entice the Poles to charge, the Mongols may voluntarily drop to Disrupt, in which case the Poles need 10 instead of 8 to refrain from charging impetuously.
4. The smoke screen : Mongol horsemen in the rear of a Polish BG may set up a smoke screen, which Polish troops may not cross during 2 turns.
5. The Mongols will play aggressively and engage in close combat, to destroy the Polish army before the arrival of reinforcements.
6. The Poles set up first and move first. 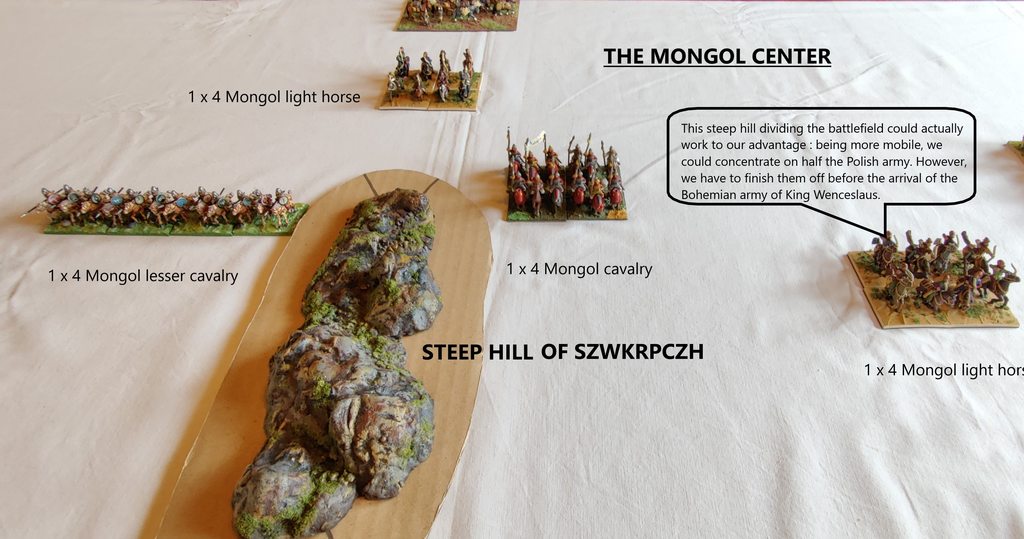 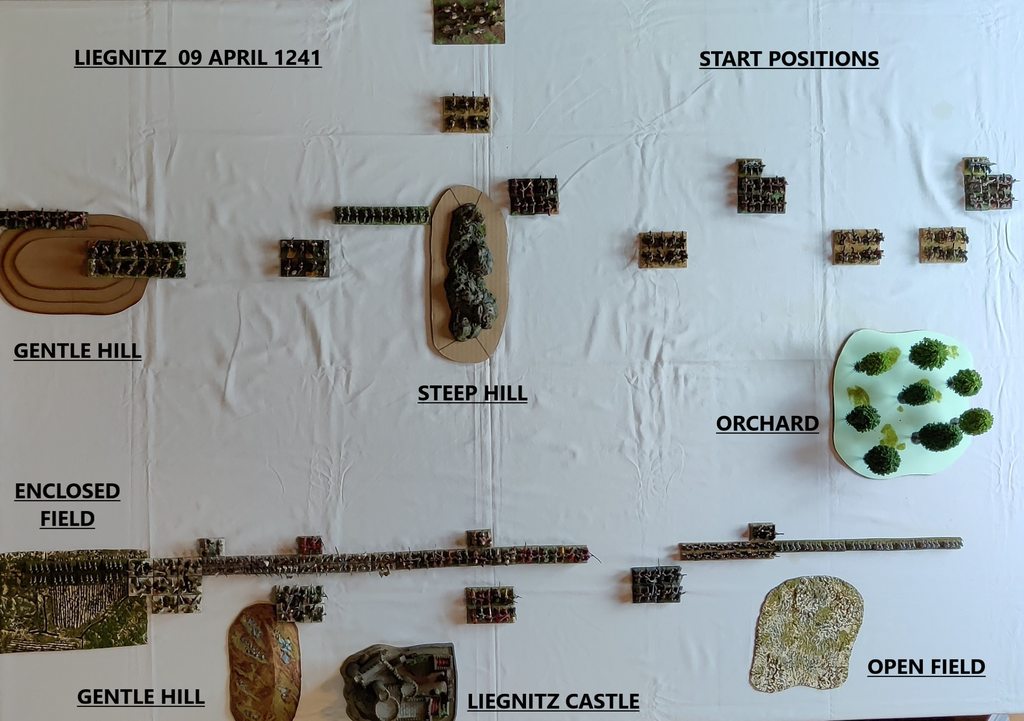 Henry has no option, but to rush forward with all his troops as fast as he can, and try to push back the Mongols. His archers, however, are vulnerable to cavalry in the open. The Moravian archers on the left are hesitant to leave the protection of the enclosed field, while the Polish archers on the right will seek cover in the orchard. Henry’s own command in the center is at risk of being split in 2 by the steep hill. The Poles have kept 2 BG of knights in reserve and to provide rear support against shooting. The Teutonic knights may have to close the open flank on the right. 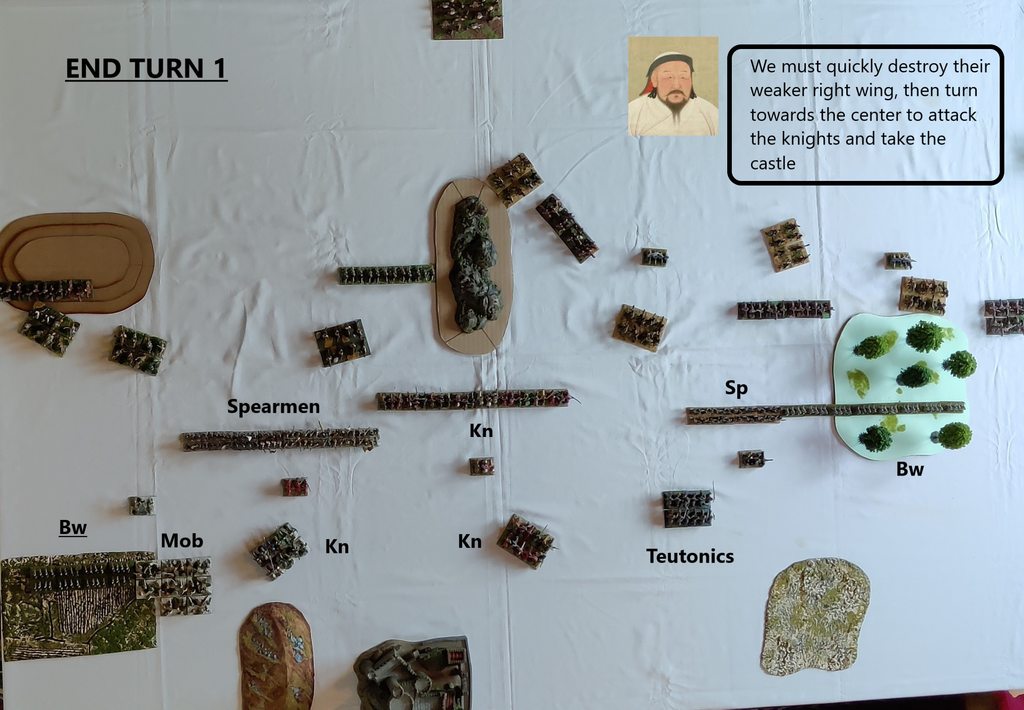 TURN 2 :
The Mongol cavalry subjects the Polish right wing to a hail of fire, and even sees an opportunity to charge the bowmen in the open.

TURN 3 :
Around the orchard, the heavy shooting yielded no results on either side. Grossmeister Angelo von Merkelo orders his knights to charge ; the light horse evade, but are caught by the charge of the Silesian nobles ! 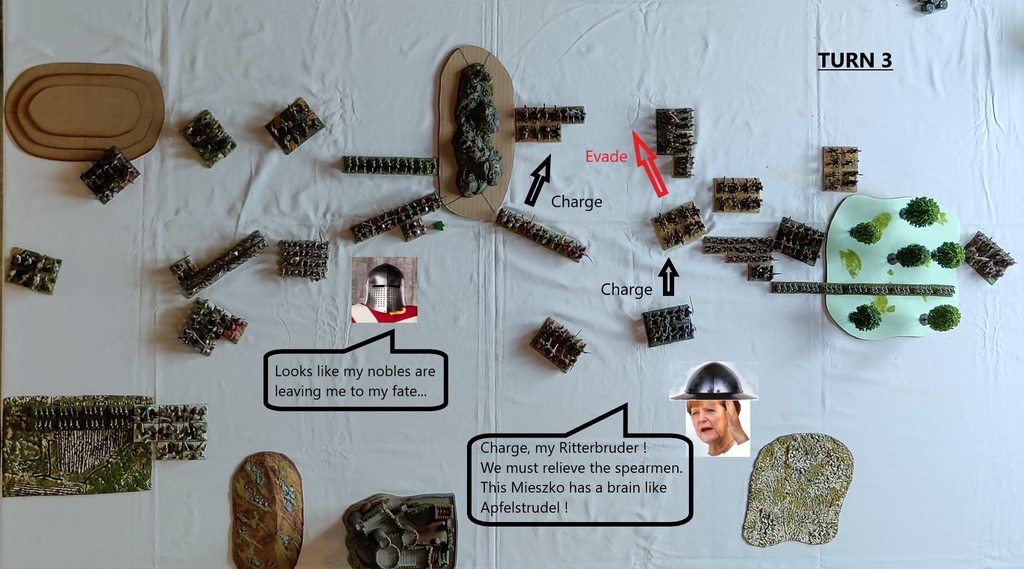 The Opole spearmen did turn 90°, but were charged in the flank by the Mongol light horse ; consequently, they could not intercept the Mongol cavalry charge on the archers.

Rules question :
The light horse cleverly contacted the second Sp base, which promptly turned around to face them, together with a second rank and an “overlap”. This means that the Cv was fighting at impact only a single rank of Sp. In the melee phase, the Sp could feed another base to combat, and we decided to add a second rank fighting the Cv (the 3 Sp base and the Lh moving to the right to make space). Thinking about it now, that was probably wrong.

The Mongol cavalry could have moved along the orchard and charged the bowmen alone, but I think they did well to fight the spearmen as well. The spearmen would all have turned to face the Lh, but after the break-off of the Lh, the spearmen could have turned again and fight the Cv in the flank (provided they had not broken off). There was even a fair chance of defeating the spearmen at impact. 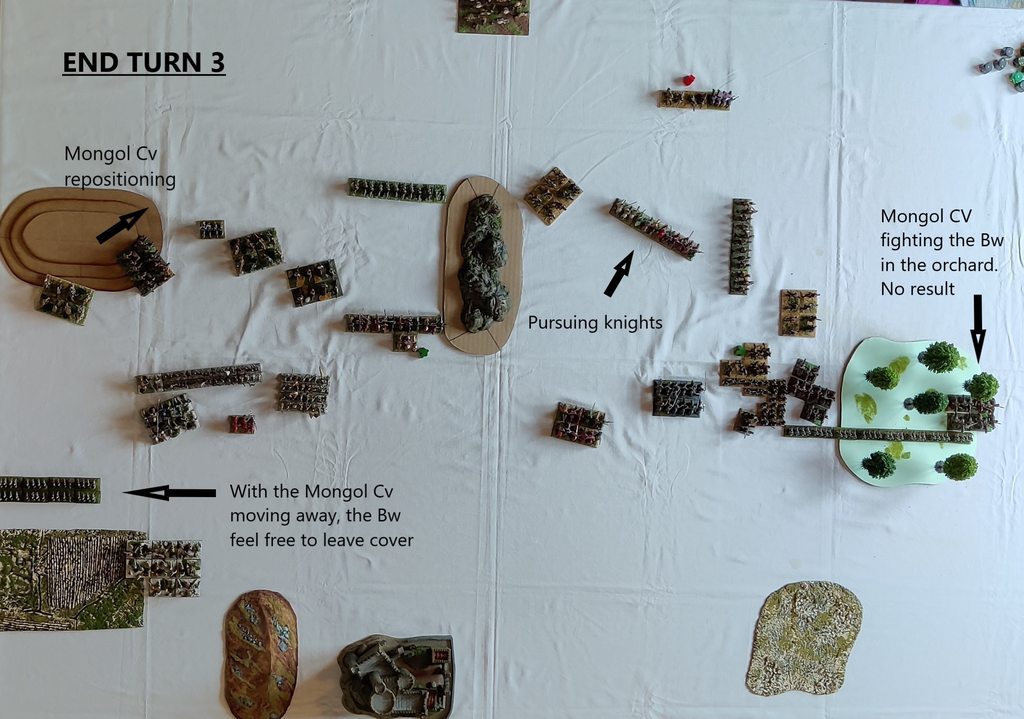 TURN 4 :
This is the flank where Baidar had decided to break through ; so after break-off, the Mongol cavalry came in again, this time alone against the spearmen, and despite the orchard in their back. And it was a resounding victory ! Mieszko II of Opole died a hero fighting at the head of his troops.

On the other side of the orchard, the Mongol cavalry again charged in on the bowmen, and here met with disaster. The Mongols double dropped to Fragmented ! So much for relying on the odds ! 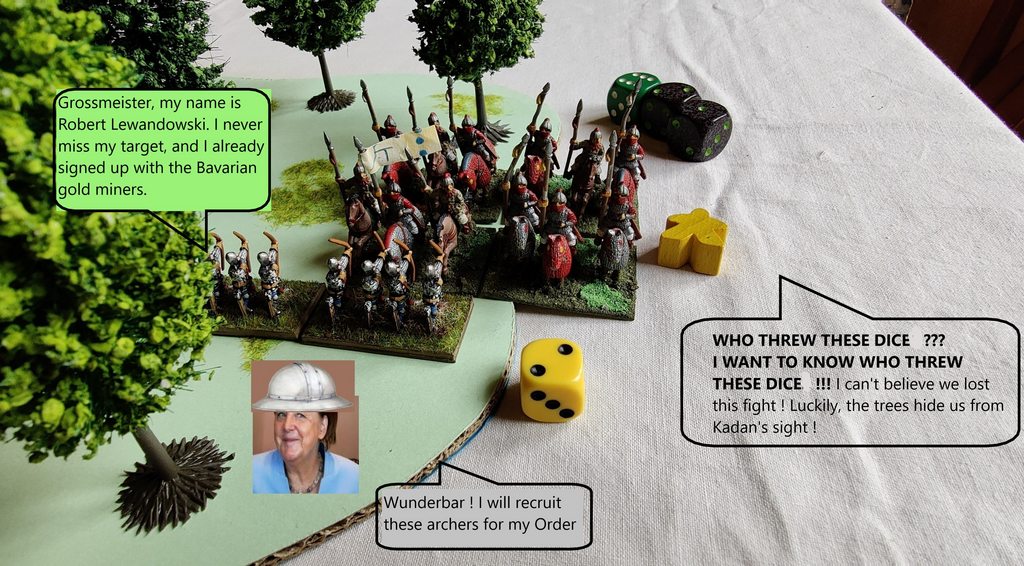 Meanwhile, on the left wing, the Polish troops had pushed forward, driving the Mongols in front of them. Duke Henry’s Silesian knights had been prompted to charge by the feigned retreat of some Mongol light horse, and had become fragmented under a barrage of arrows. However, they stood firm when charged by the protected Mongol cavalry, and even won the subsequent fight ! 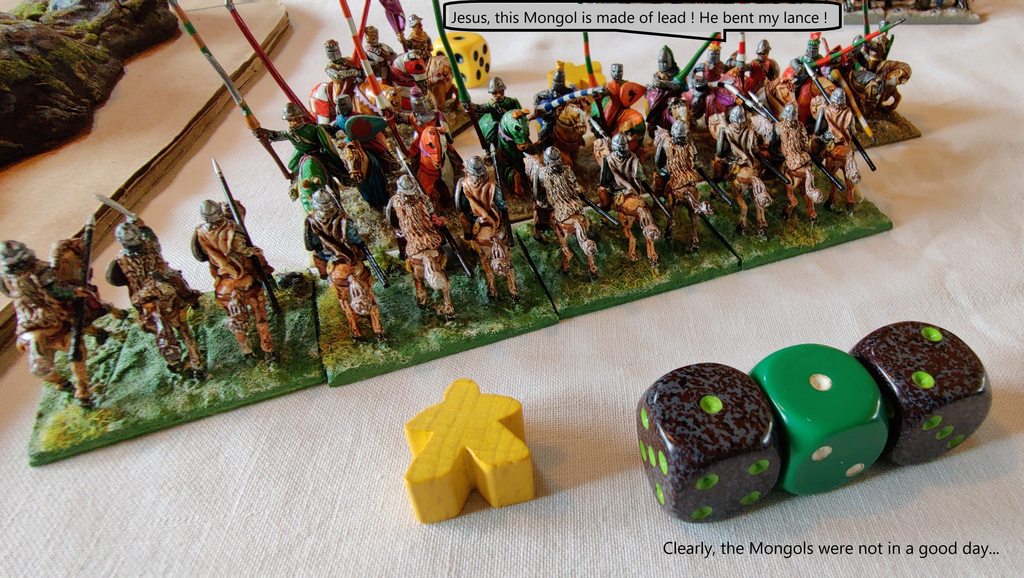 Further to the left, the Moravian and Polish spearmen are driving the Mongols in front of them, with some knights in rear support. With the redeployment of the Mongol cavalry, the Moravian archers felt secure in leaving their enclosed field, led forward by Boleslav Syepiolka.

One of the BG of Silesian knights, in pursuit of Mongol cavalry, found itself surrounded by light horse, which set up a smoke screen in their back ! 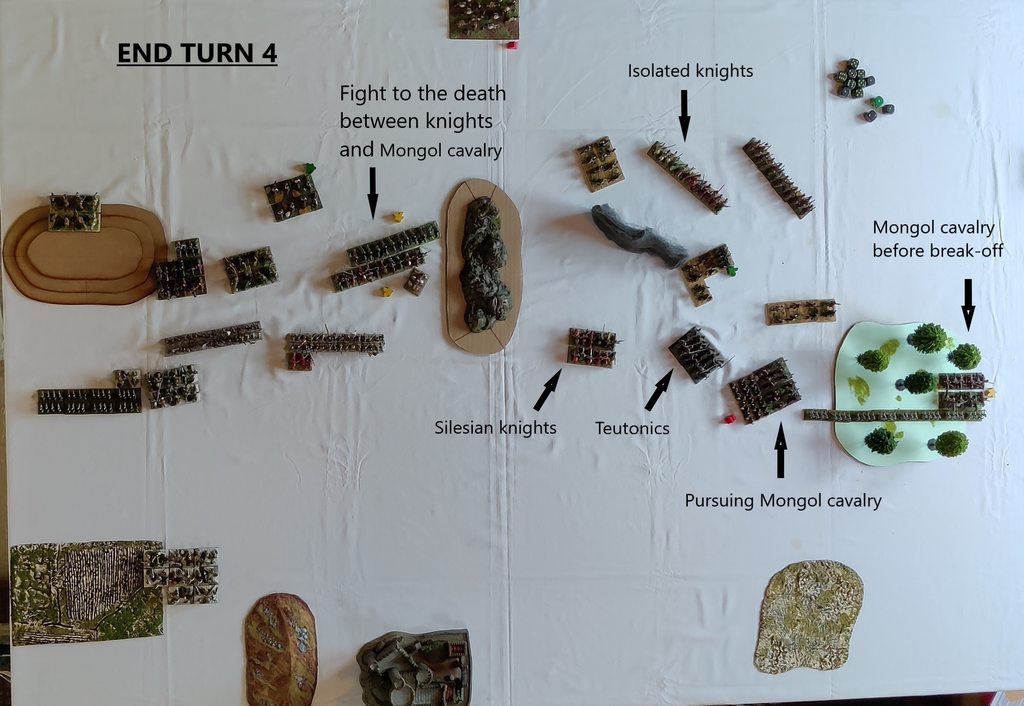 TURN 5 - 6 :
After the death of their leader, the Opole spearmen routed, with the Mongol cavalry in hot pursuit. But Grossmeister Angelo von Merkelo was not going to let the Mongols get away with it.

However, in typical Mongol fashion, the light horse swarmed around the Teutonic knights and charged them in the flank and in the back ! 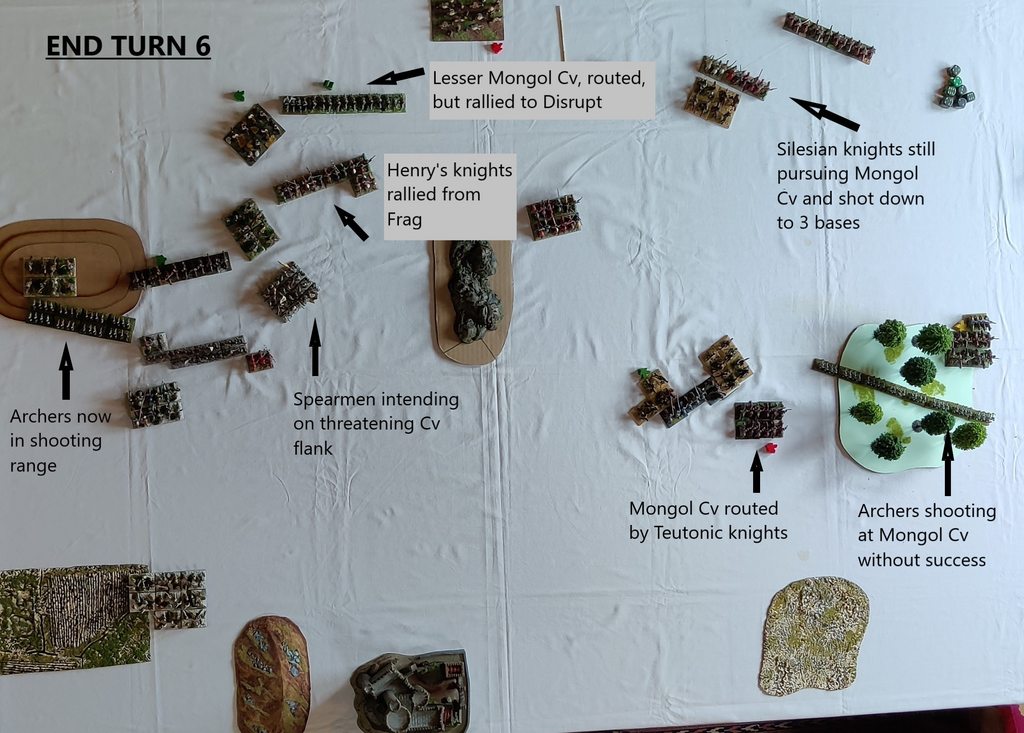 TURN 7 :
Having run out of space, the Mongol cavalry turned to face the charge of the isolated Silesian knights. They lost a base and went Disrupt, but the tables turned when the faithful light horse charged the knights in the back ! Again, the Mongols had applied their favourite tactics and this time with success ! 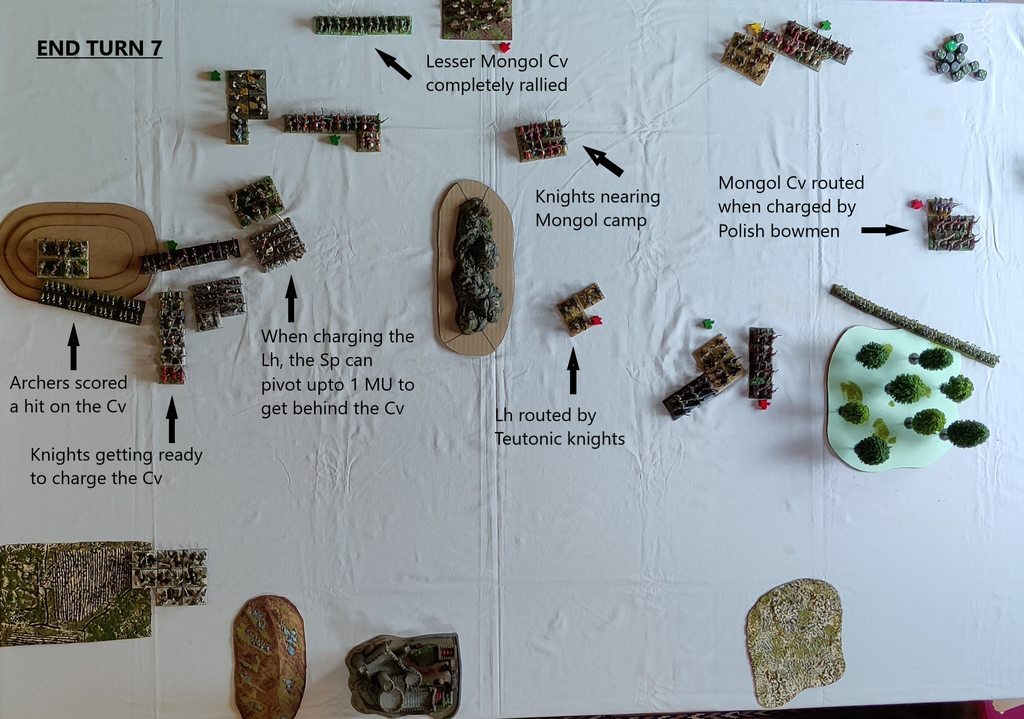 TURN 8 :
As could be expected, the Teutonic knights of Angelo von Merkelo defeated the Mongol light horse in that unequal combat, and so completed the rout of the Mongol army. 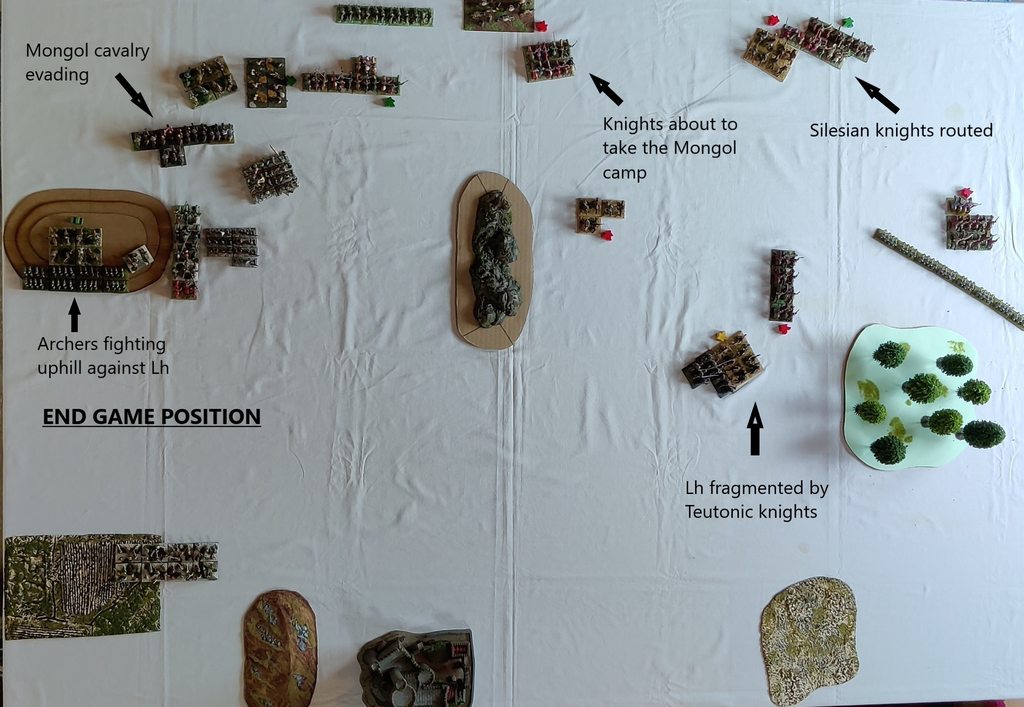 CONCLUSIONS :
With hindsight, the battle would have been more balanced if the Mongols had moved first, giving them more space to maneuver and more opportunities to draw the knights out of the line. The fast advance of the infantry was not realistic. That being said, the Mongols were quite unlucky on several occasions, where average dice would have given a radically different outcome.

AFTERMATH :
The Mongols have achieved their strategic aim, namely preventing the Polish armies from reinforcing the Hungarians. Two days later, the Mongol main army, under Batu and Subotai, crushed the Hungarians at Mohi.


Thanking you for reading this report !
More pictures of my minis on www.tituspullo.over-blog.com
Top