This year’s Belgarum was an 800 AP open themed competition on reduced size tables with the added twist that you could bring up to an extra 80 points worth of Poor troops.

I therefore elected to go with Late Republican Roman as follows:

IC, FC, TC, 2 x 6 LF sling, 1 x 4 LH bow, 1 x 8 Thracian MF with HW, all average and undrilled, with 1 x 2 Poor Elephants, 1 x 6 Poor Legion, 4 x 6 Sup Legion and 2 x 4 Sup Prot Cav, LtSp Sw. 12 BGs – breaks on 11 and also came with 5 x FF and a Fortified Camp. The FC provides a good flank march option. It had done reasonably well in practice but was destroyed in its last outing vs Tudor English. Its set up was pretty simple with the Poor Legion occupying the FF and the rest of the army attacking on a narrow front. The Elephants were only there in case I came up against Knights or similar.

Game 1 was vs Early Successor. I won initiative and chose Developed with a Coast. There wasn’t too much terrain around that would influence the game other than an Enclosed Field in a central position which the Thorakitai were tasked with holding. Renfrey’s army had an IC & FC, 6 x 10 HF Pike, 8 Galatian HF, 1 x 8 Thorakitai, 1 x 8 Thureophoroi, 1 x 6 Thracians, 1 x 6 LF sling, 1 x 4 Cav plus 2 x 2 Poor Elephants.

It looked extremely strong frontally but with only 2 generals and no LH lacked flexibility. The pike in 10s are seriously bad news for Romans as they have to lose 2 bases before they start to lose POAs. 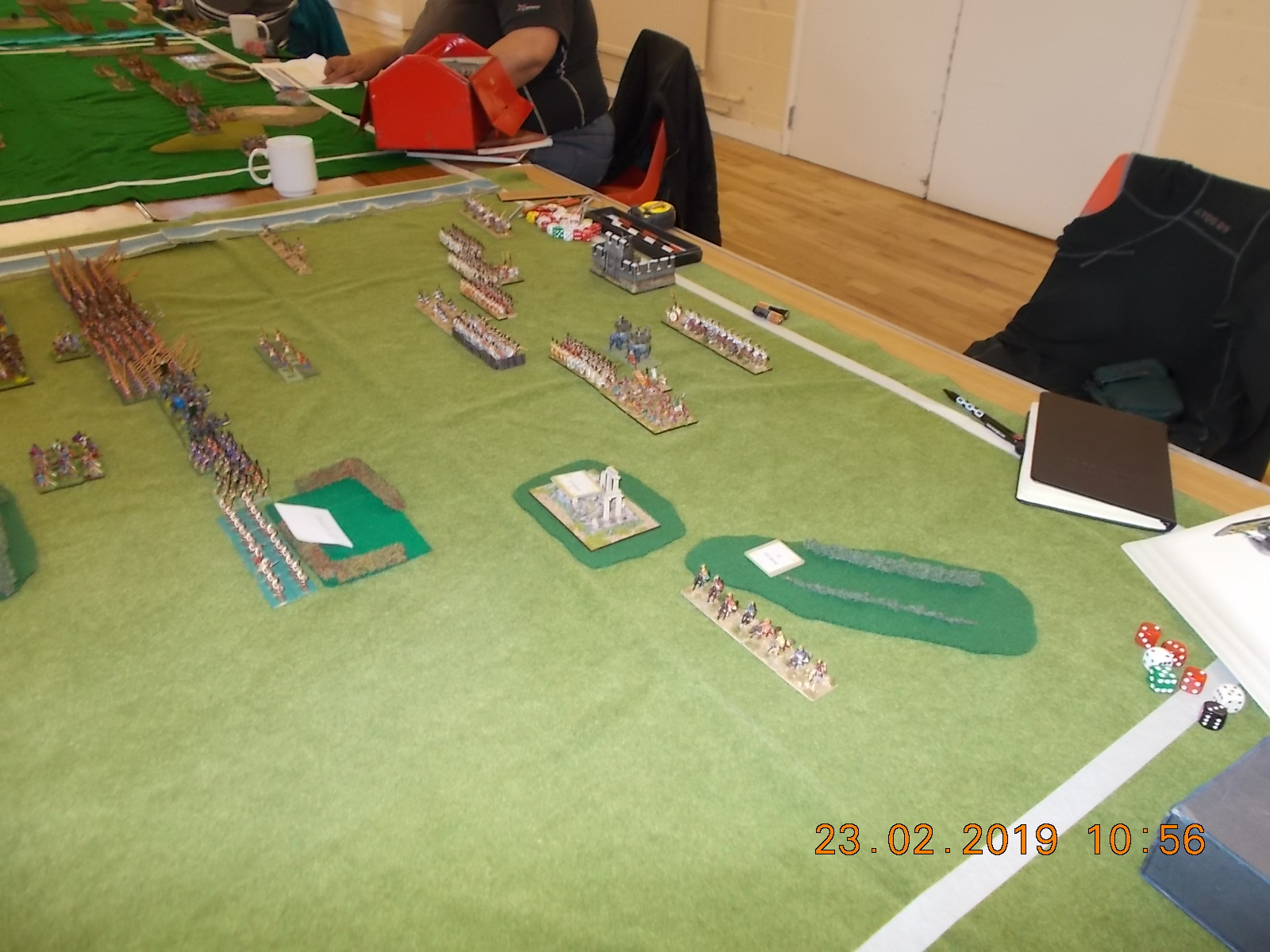 Check out my new ‘Forged in Battle’ Temple pretending to be a Village! 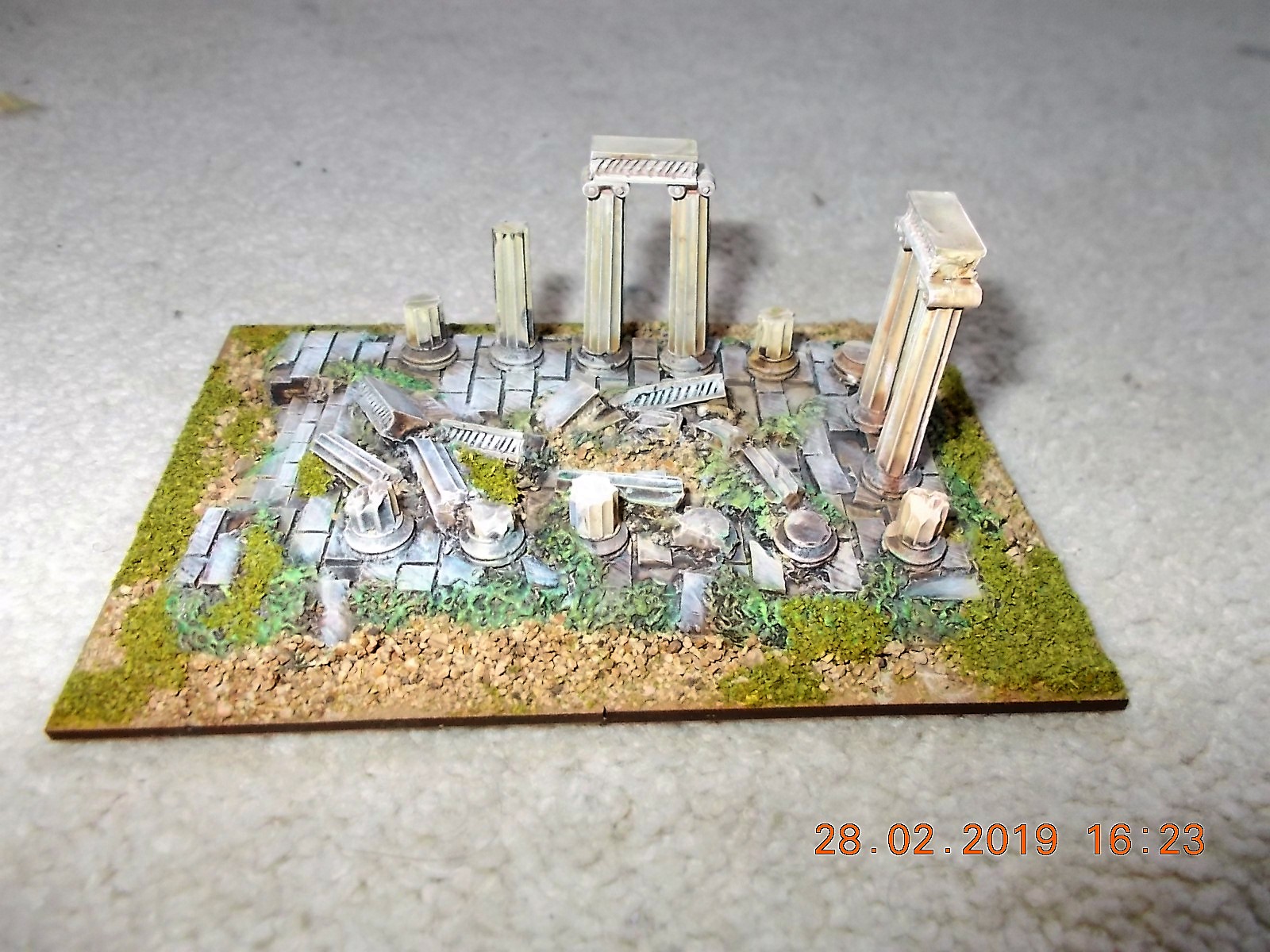 Renfrey’s plan seemed pretty simple – a steady advance with the pike to mix it up with the Romans. I didn’t fancy this so deployed in a staggered line and held back. There was a clear opportunity on my left flank to get my Thracians into the Thorakitai quickly with the help of my LH. If this went well a Superior Legion would go into the Galatians and open up the entire flank. 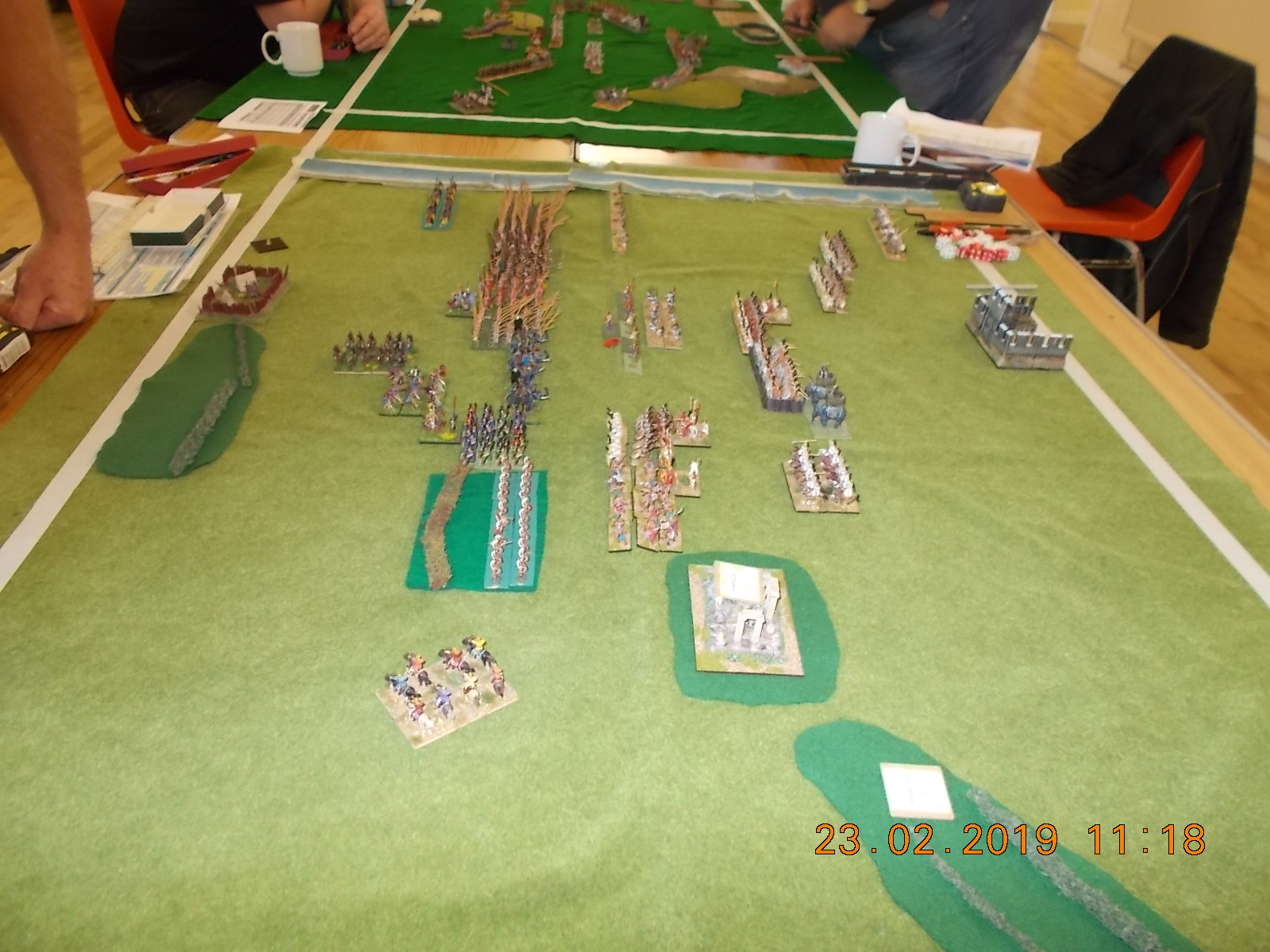 Things went pretty much to plan. Seeing the danger Renfrey moved his cavalry across but it would not arrive in time to help. In fact they ended up joining in the general rout on that flank. 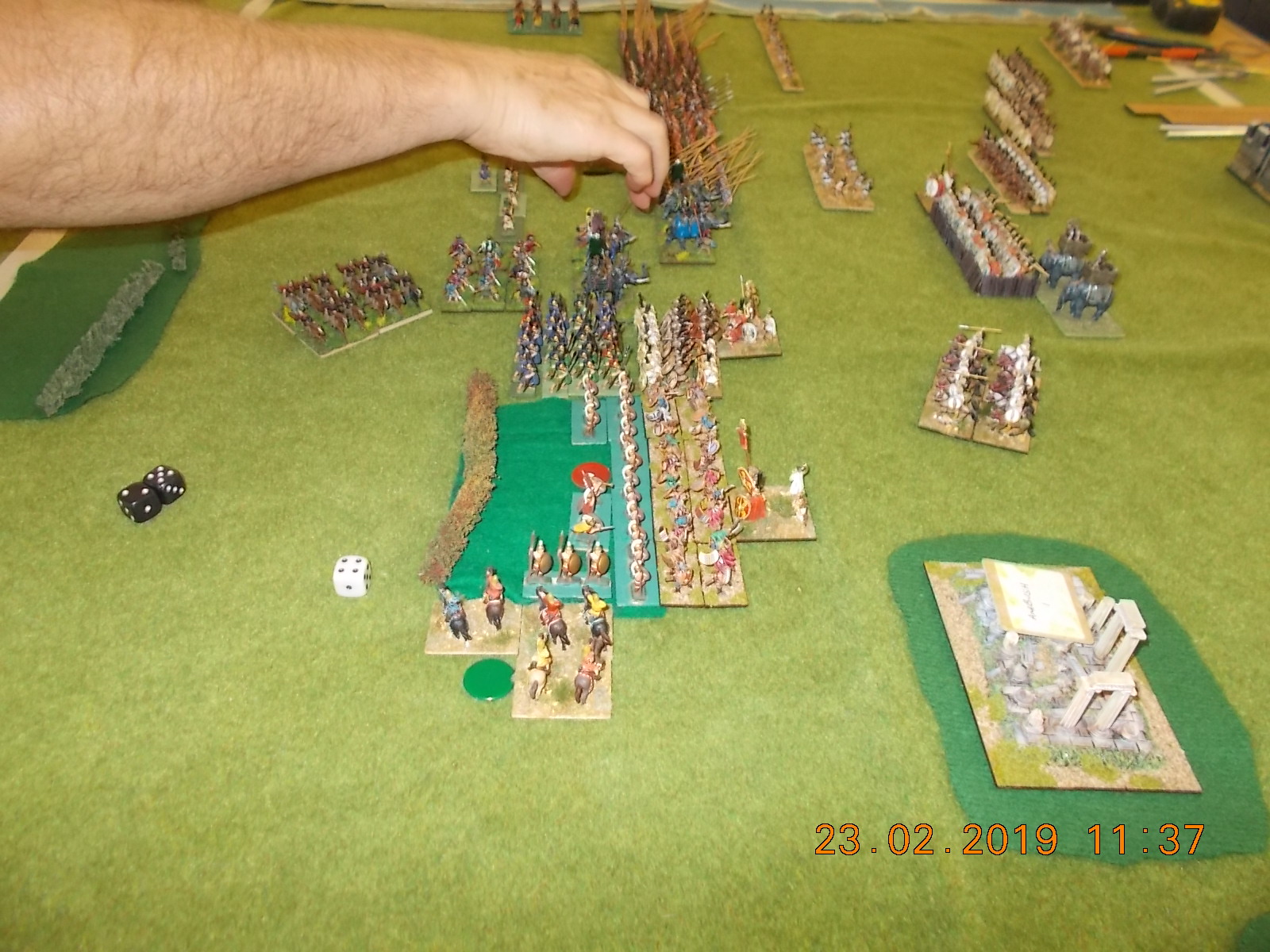 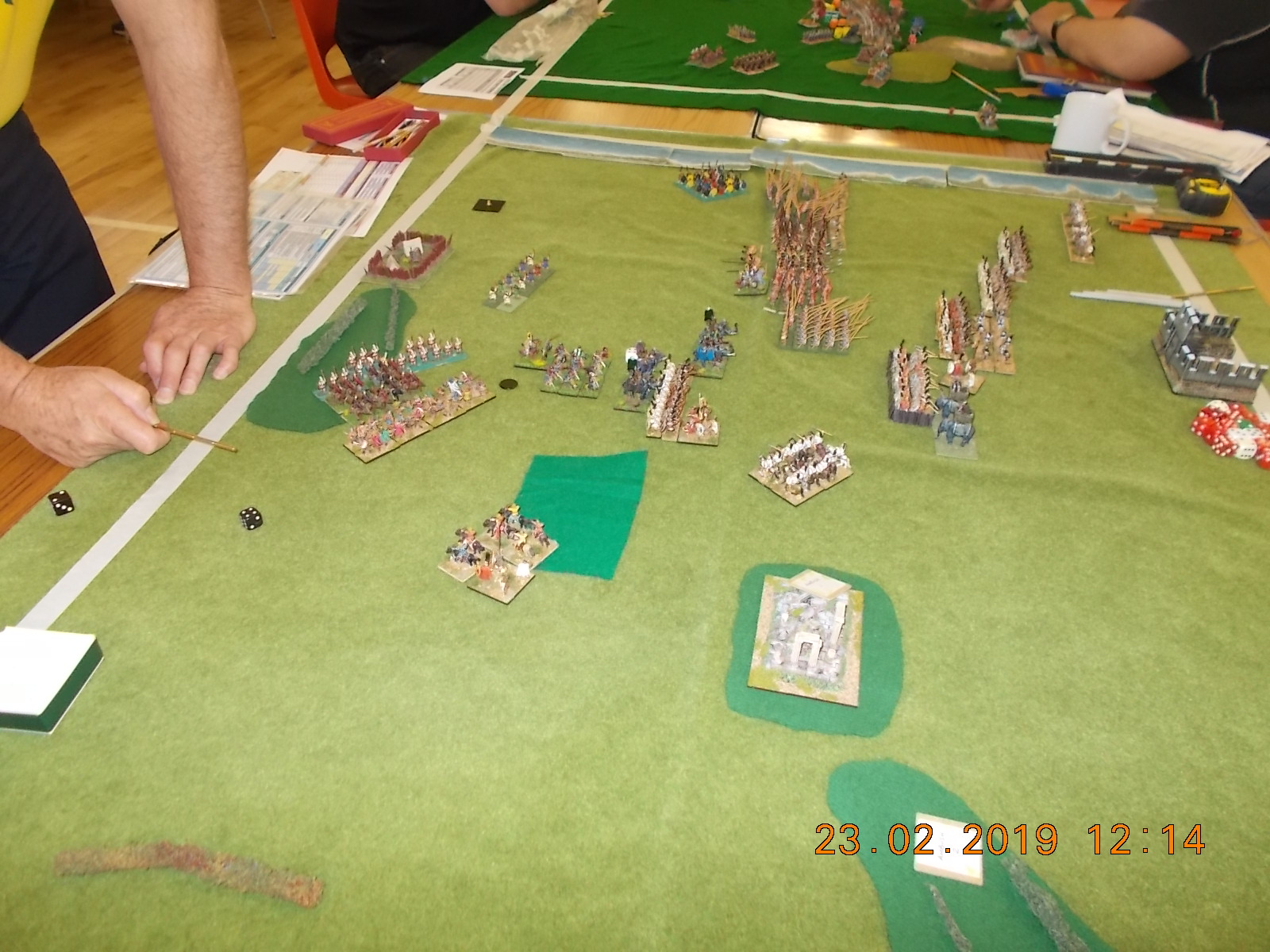 In the centre my LF tempted some pike into charging which brought them close to the FF.

They sensibly wished to avoid this which allowed the Poor Legion to emerge and threaten their flank.

The pike tried to go into orb but failed and it was clear their days were severely numbered. With several units already broken and with more carnage to come Renfrey conceded.

A good start to the weekend for Rome.
Pete
Top

Re: Romans at Belgarum - Game 1

Thanks for the AAR, Pete. Cool temple...er, village - a real handyman’s special!
Top

Re: Romans at Belgarum - Game 1