The Northern Classic was a new 5 game event hosted by MAWS. The theme was any army from 500 BC to 500 AD. The twist was variable points. Each player would use an 800 AP army twice, an 850 AP army twice and a 900 AP army once. Points were not declared until after deployment.

I’d already decided to use the 850 AP version vs any Pike army. The 900 AP was designed for Romans and the 800 AP version would be used against anything else.

We both had +3 initiative which I won and chose Agricultural. We had a fairly open table and I moved first.

This is Chris’s army after my first move. He has a central pike phalanx with both Thracians on his left. His light troops and cavalry are on his right. My plan was to hold back in the centre whilst trying to boss the flanks. On my left are 1 BG of Companions and the Thessalians plus my LH and LF sling. On my right I have the other Companions and a BG of Thracians. The LF Javs have been sent forward to try and prompt uncontrolled charges and to slow Chris’ centre. 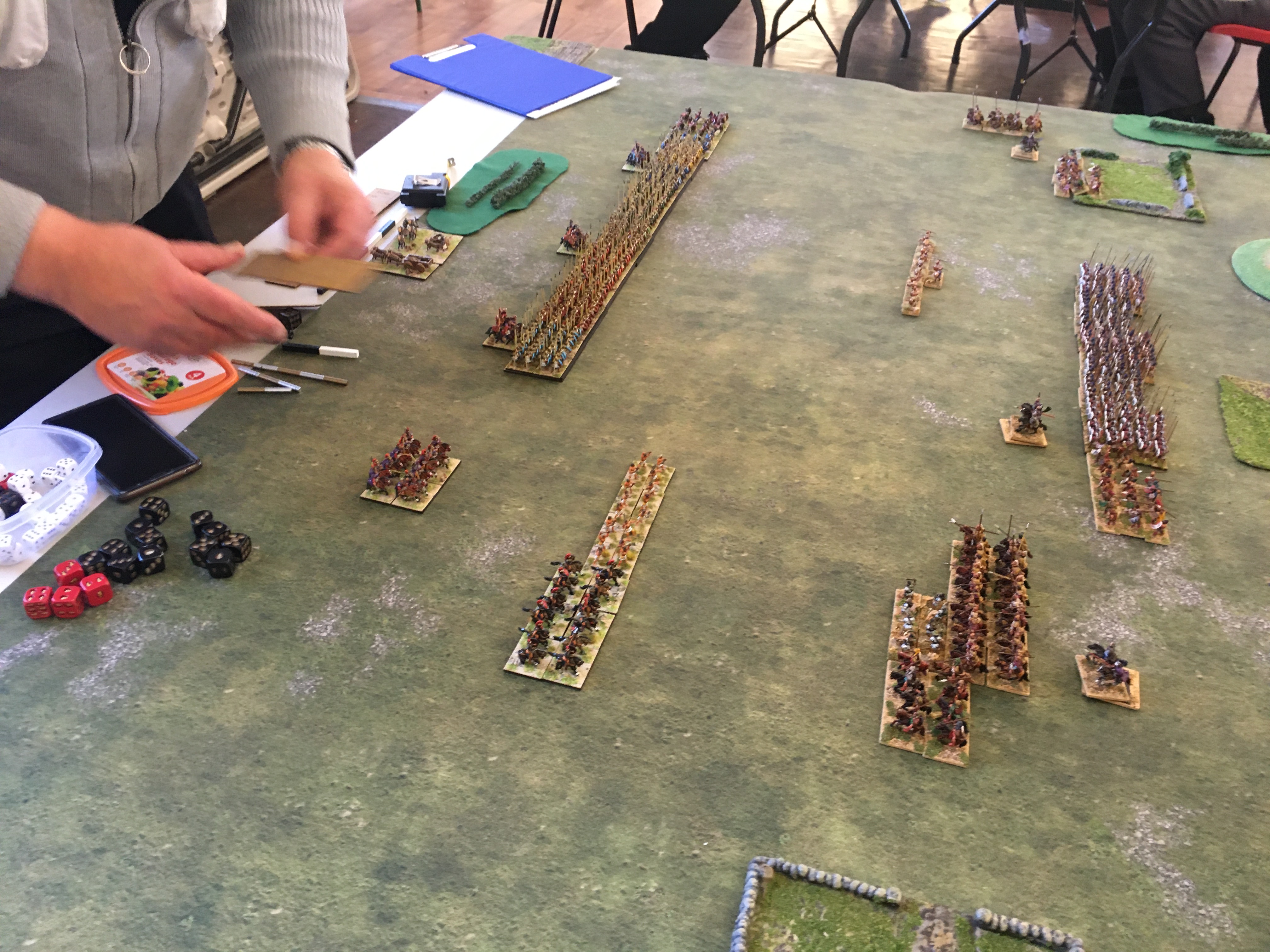 Chris responded by peeling a Pike BG off each flank to bolster his flanks. 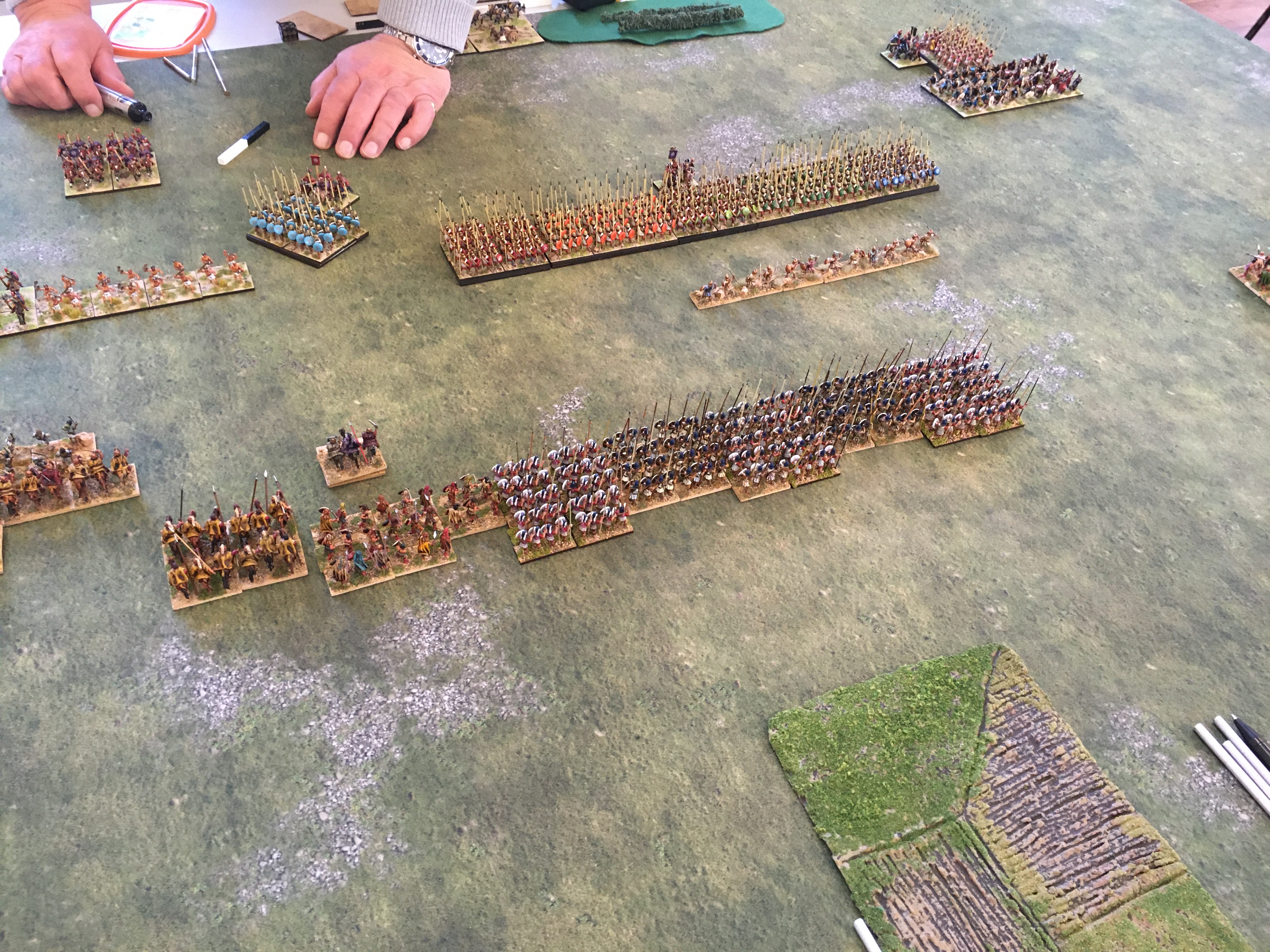 To avoid the temptation of an uncontrolled charge Chris turned his entire phalanx to his right. 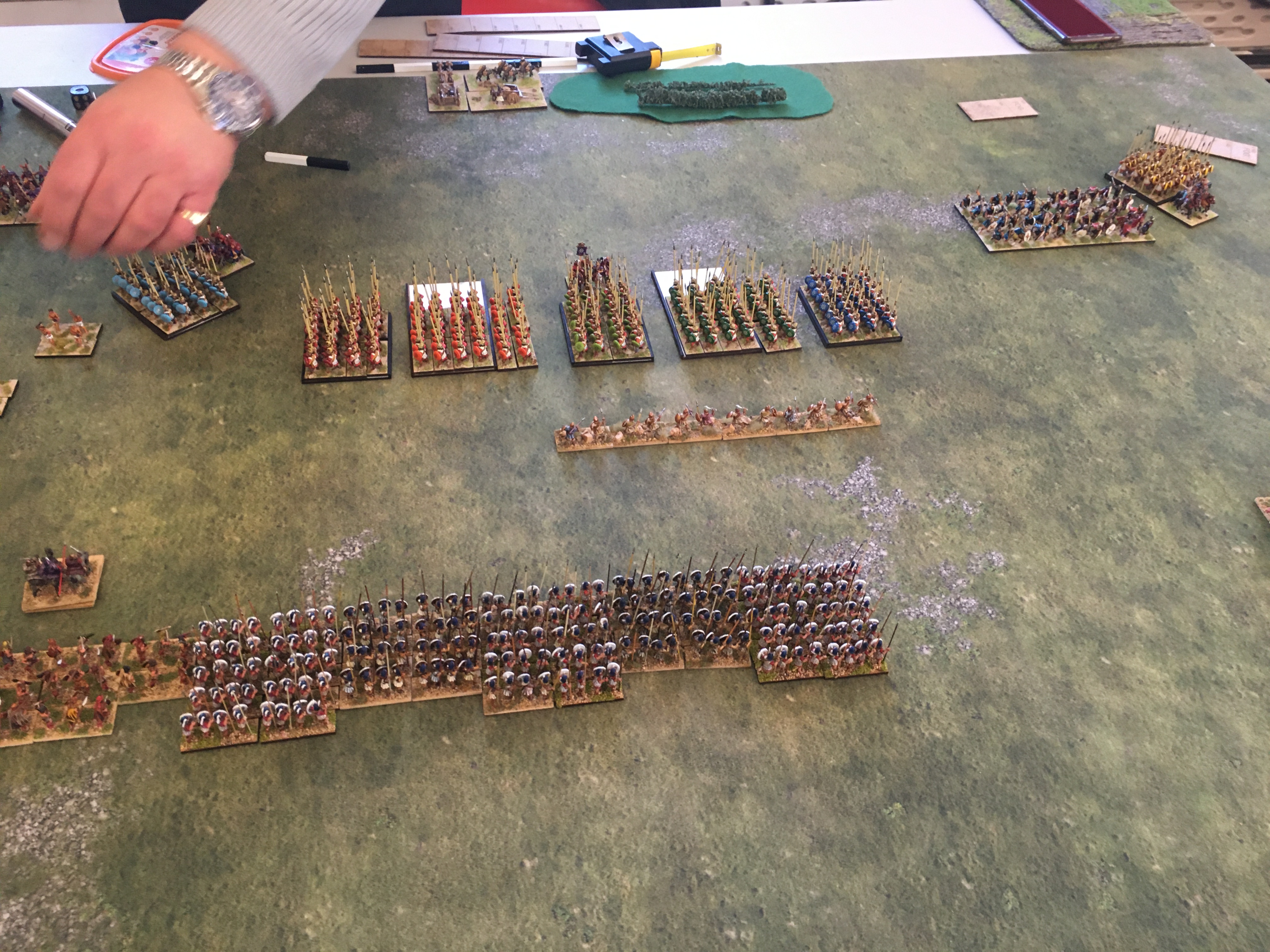 I wanted to push the attack on my left so charged his LF with mine – 4 vs 8 is not particularly clever but I hoped to get support there quickly. Unfortunately my LF lost the initial impact and disrupted and lost a base which is bad news for an 4 base BG of average troops. 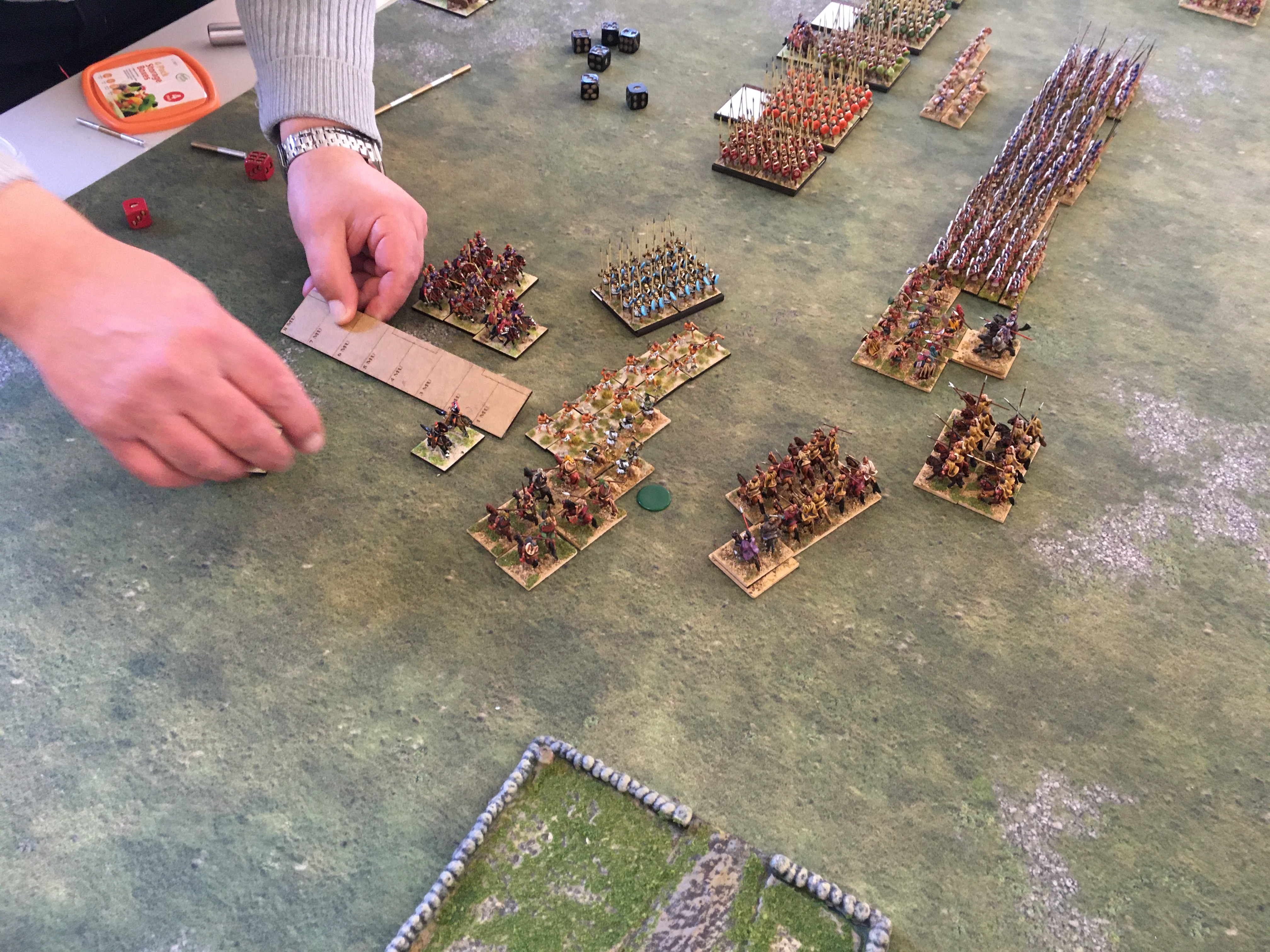 In the melee my slingers lost another base and auto-broke. Not quite going to plan already and the pursuing enemy LF were now getting in my way. I closed my pikes up and had to get my Thessalians away from Chris’s lancers. My Thracians had to brace for a pike charge and were joined by the IC to stiffen their resolve. 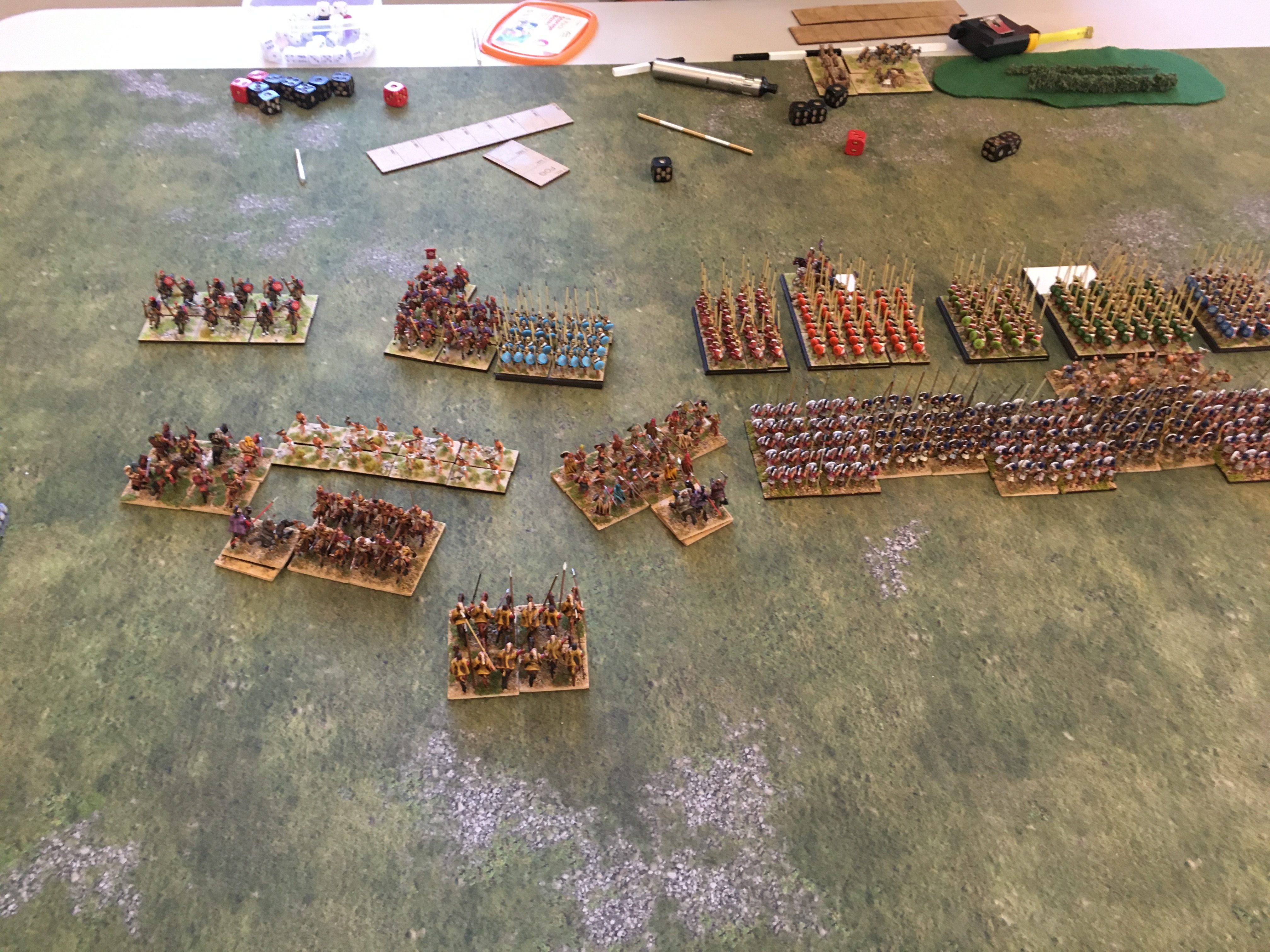 Even with the IC with them the Thracians disrupted and 3 of my pike BGs went into Chris’s phalanx. I had the upper hand initially but only 1 enemy BG disrupted. 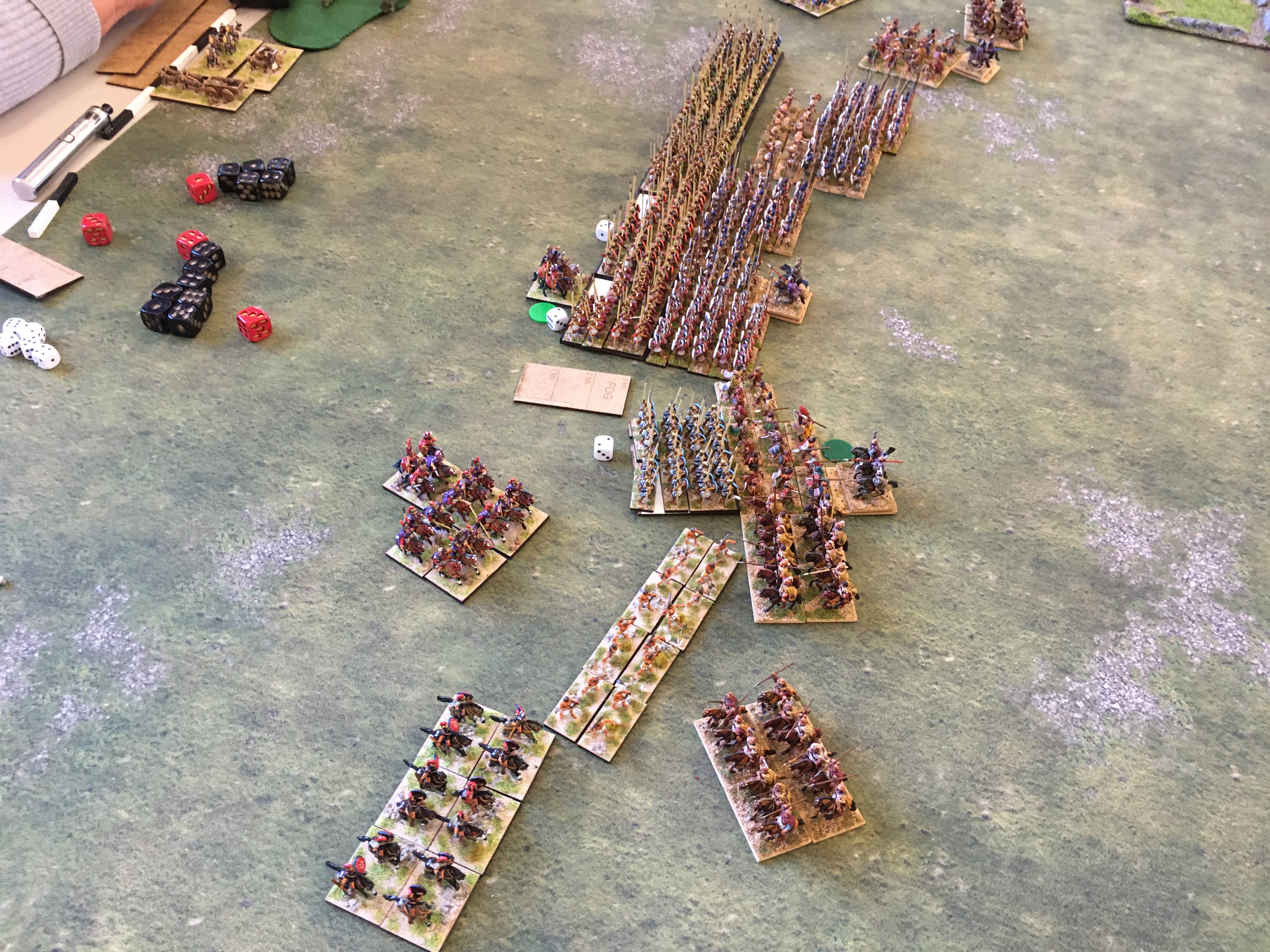 On the right my Companions were working hard to avoid Chis’ pikemen whilst trying to get the Thracians in their sights. 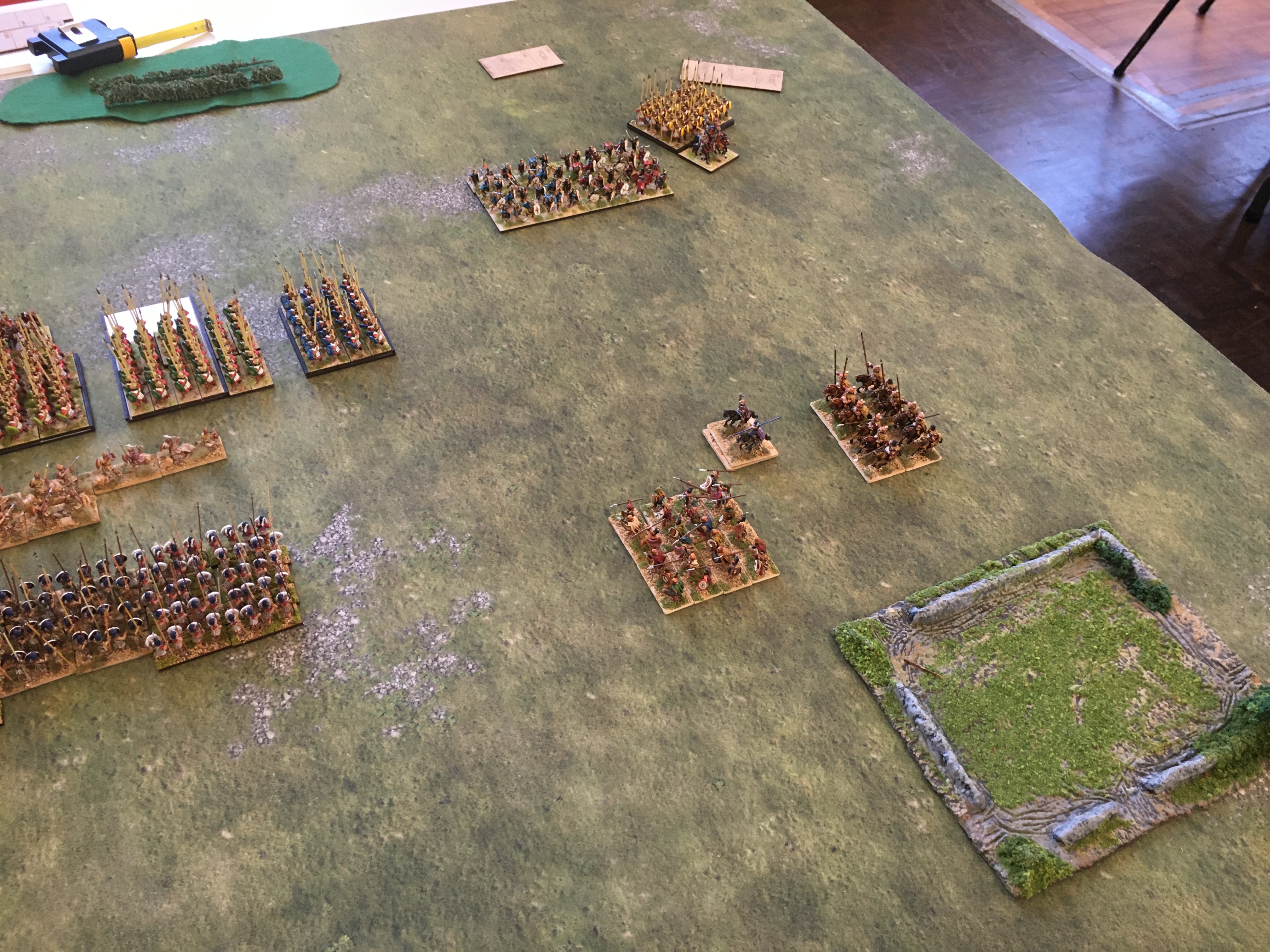 There was now a prolonged melee which would last for most of the game. Chris has 2 Pike BGs disrupted whilst the Thracians have rallied and taken a base off their opponents. The pikes facing my Superiors have lost 2 bases but the presence of their IC keeps them in the game. The Thessalians have charged away Chris’s LH but my Companions have lost a base in a straight fight vs the Successor Lancers. On my right I have finally avoided the pike and charged a Thracian BG with my own Thracians and Companions. 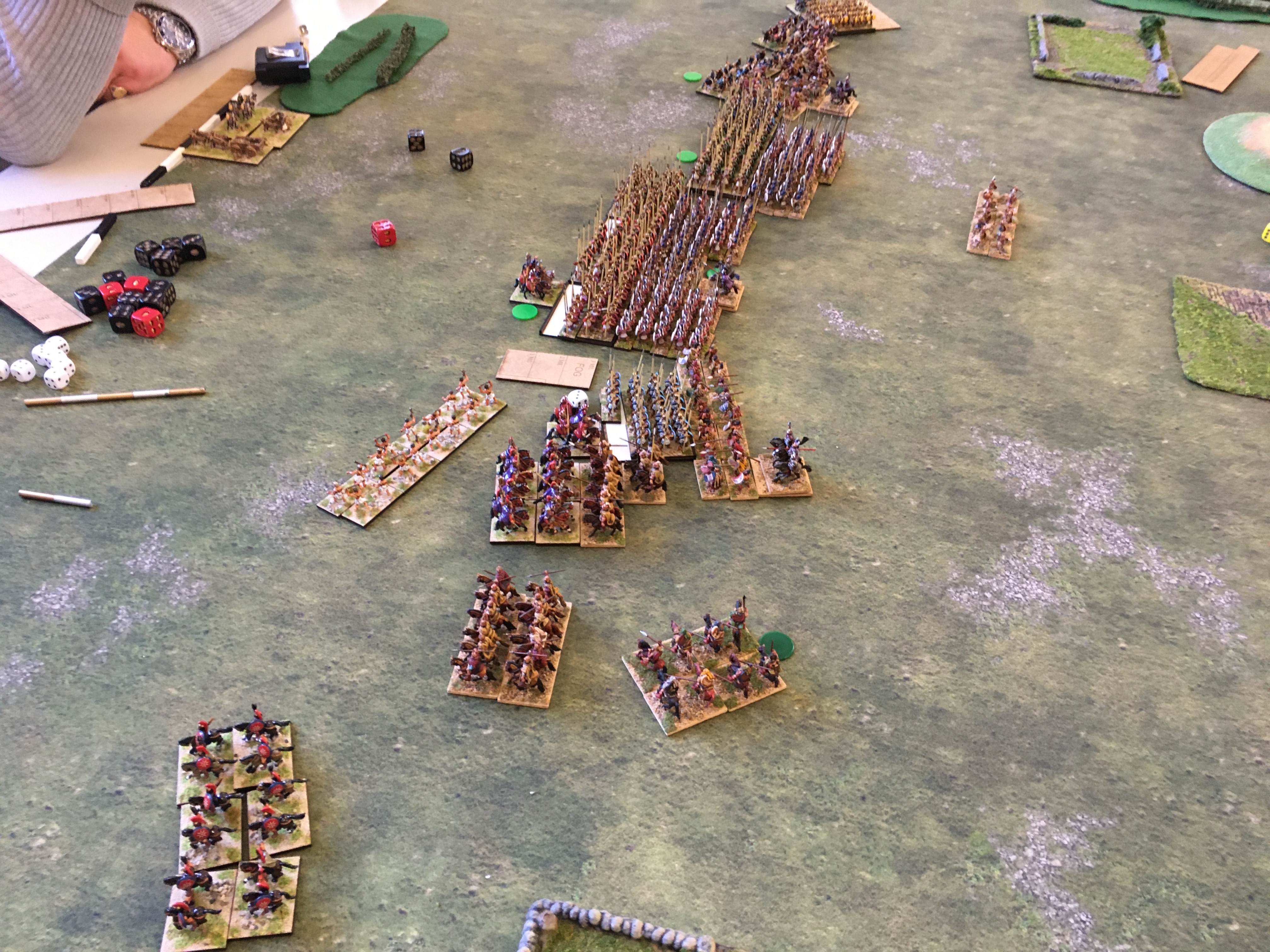 As the melee continues my Companions disrupt against the Average Lancers and look to be in trouble. Another of Chris’s pike goes disrupted whilst his Thracians are now fragmented. My decision to field my pike in 10’s is definitely an advantage in a protracted melee such as this. 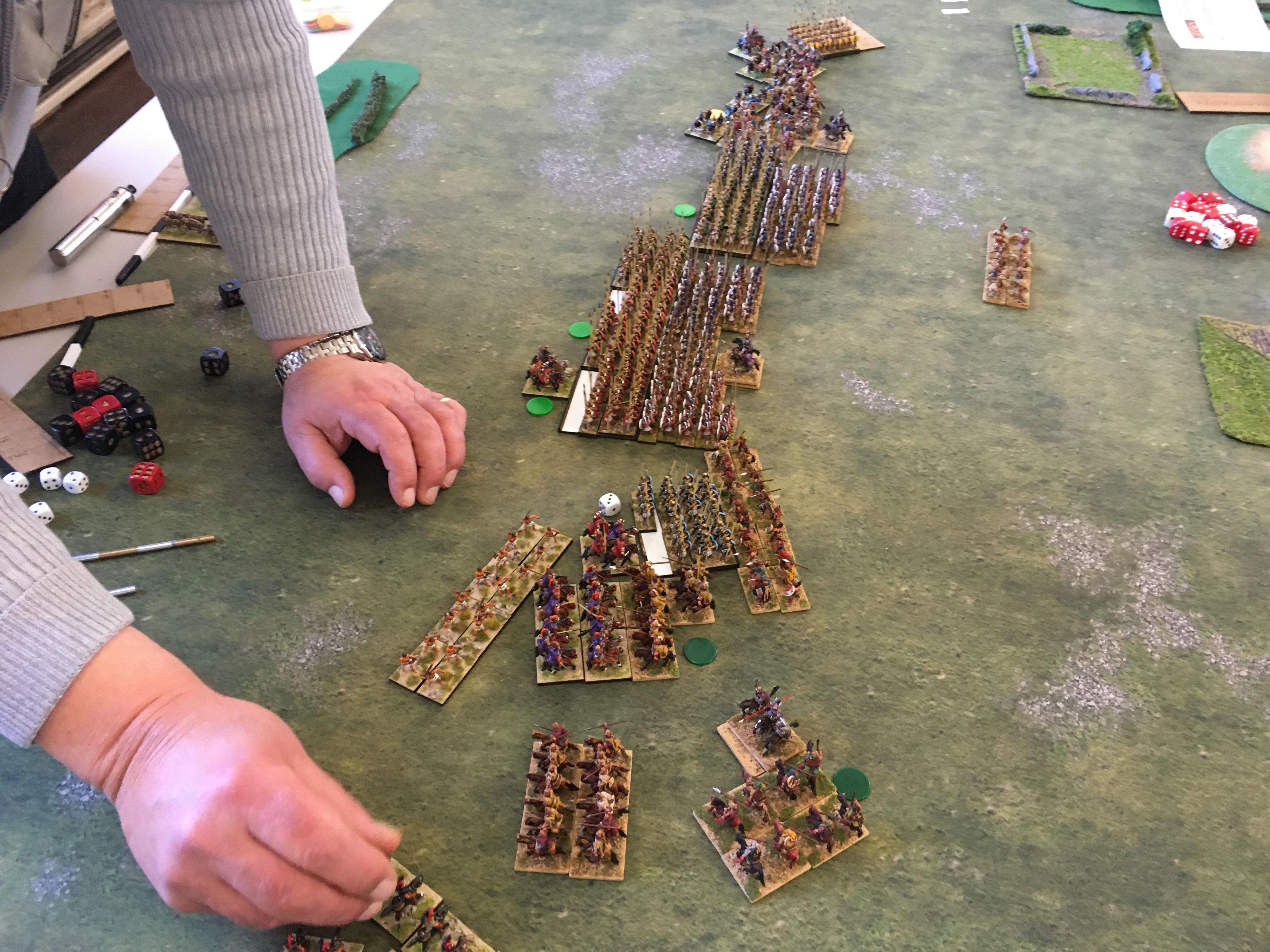 Finally a break through. The enemy Thracians break and all of their friends nearby disrupt which was a bit harsh on Chris. His 12 base BG of Superiors are performing poorly and have also fragmented. 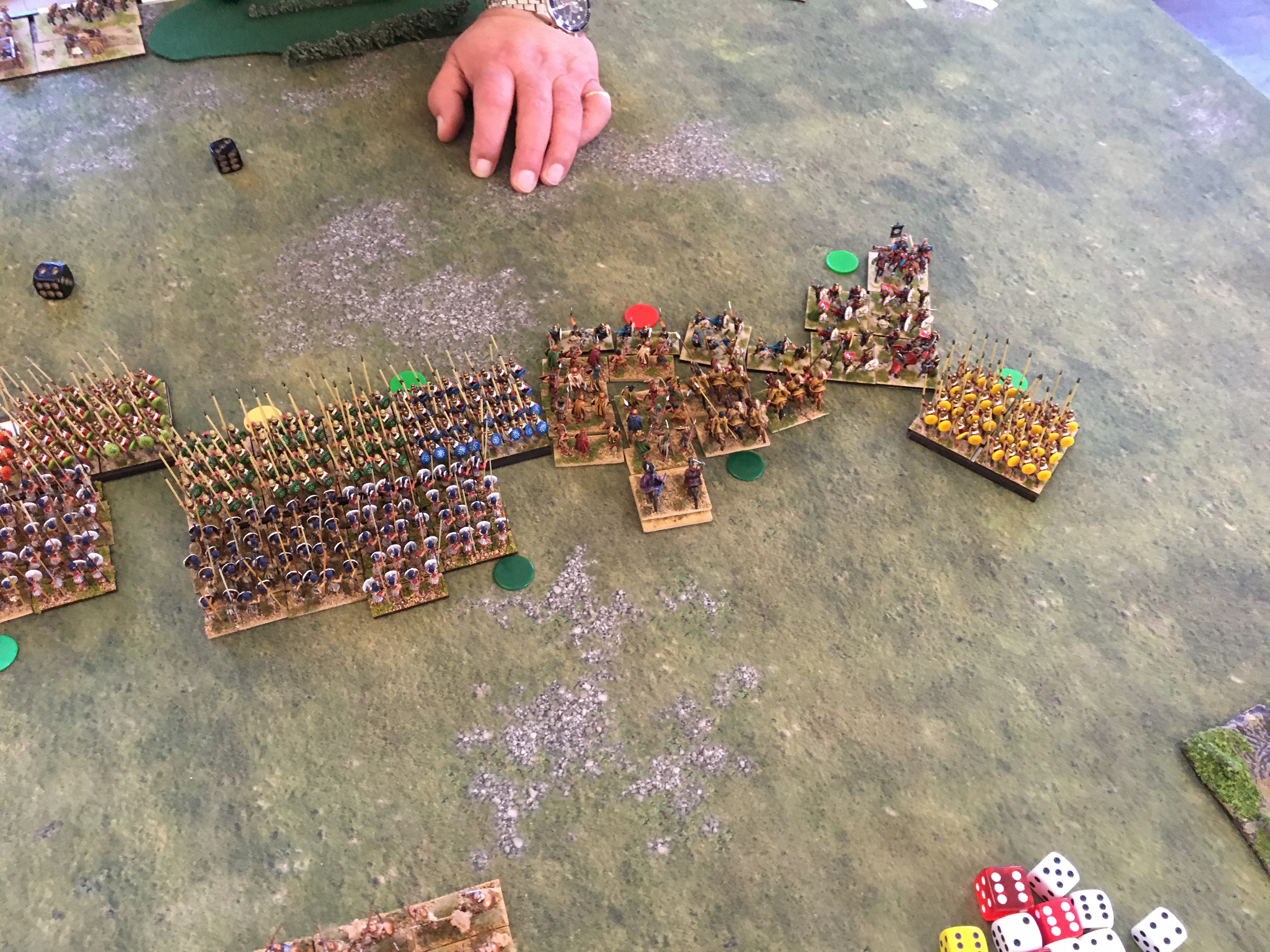 In the following turn Chris’s Superiors break. Of his 5 central pike blocks, only 1 is unscathed. The BG facing my Superiors is down to 5 bases. Just 1 more for an auto break. Unfortunately 1 of my pikes is also fragmented. 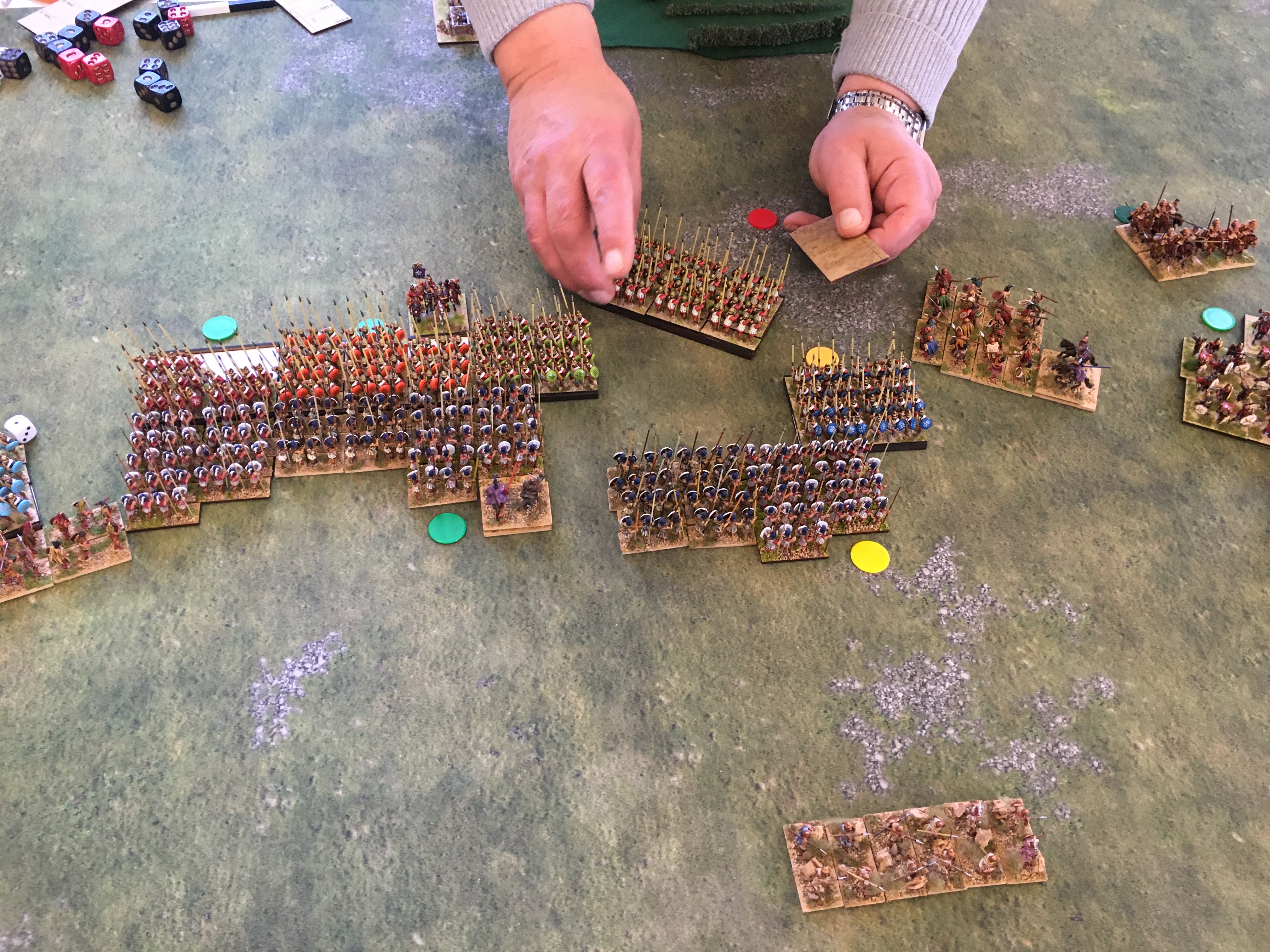 Back on my left and my 4 LH have charged Chris’s 6 LH to ensure they cannot stop the Thessalians delivering a flank charge to save the Companions. They are fragmented but still in the fight. The LH are lucky and win the impact and Chris’s LH drops a level. 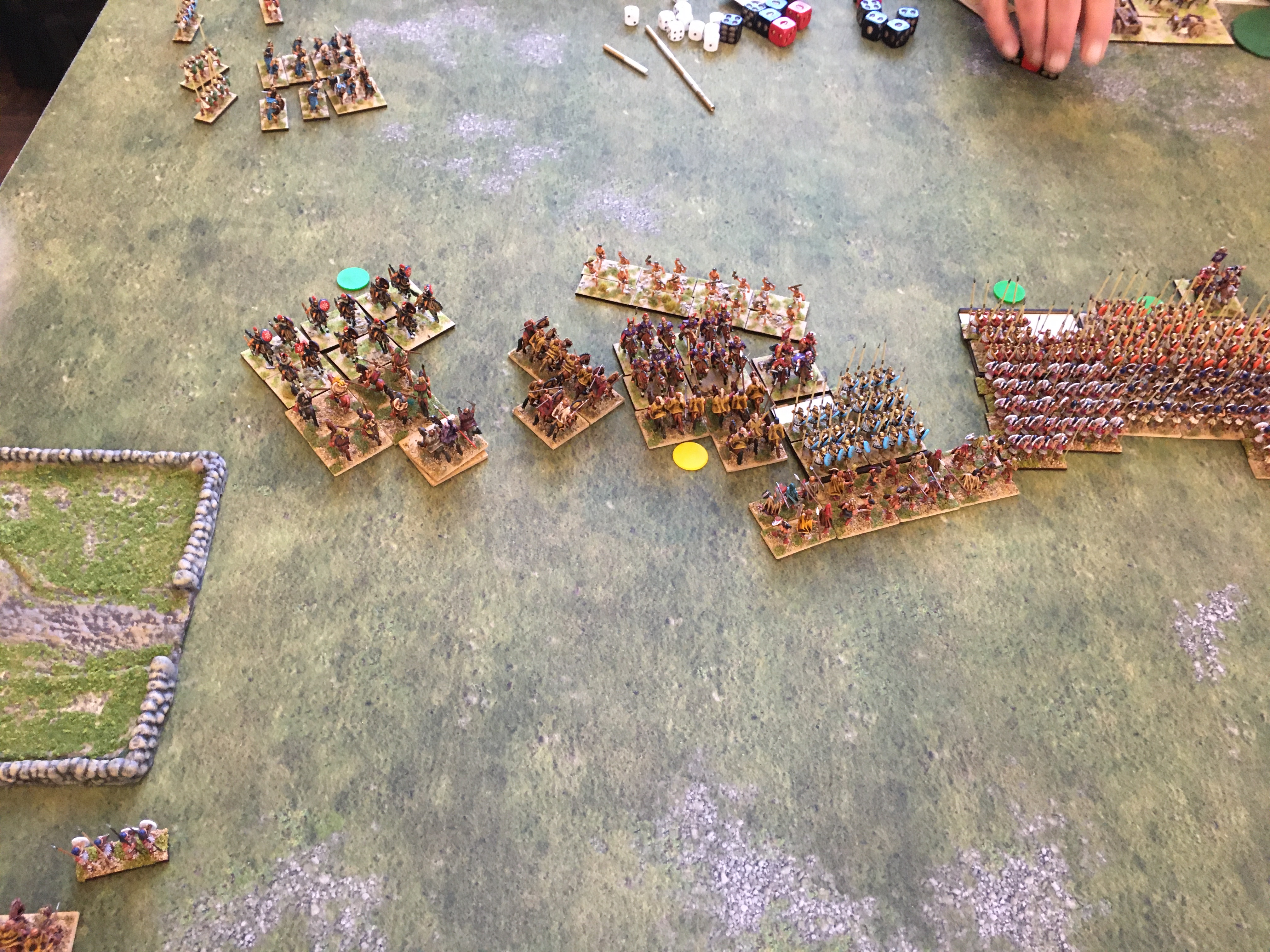 Time is running out though and there are no more photos as I try to break Chris’ army. The Companions hang on and the Thessalians flank charge breaks the enemy cavalry. The enemy LH also break. Chris has lost 9 of 11 AP and my Superior pike inflict 4 hits on the 5 disrupted bases they have been fighting for most of the game. A base loss or a double drop and it’s all over. Unfortunately Chris throws 3 6’s and time is called.

Still – we avenged our previous defeat – although we did have 50 more points on the table – and it’s a winning start to the weekend with a 23 – 8 win.
Pete
Top

Re: The Northern Classic - Game 1 vs Early Successors

Nice write up with some nicely painted figures. Thanks.
Top
Post Reply
2 posts • Page 1 of 1