I won initiative and chose Desert. As in the first game this would give me the advantage of deploying second. We had quite a bit of terrain on the table. This is Steve’s deployment. On his right are both cavalry BGs, a Legion, 3 Pike BGs and his Thorakitai. These are screened by the LF with Javs. The LF Bow are to his right of a steep hill and in front of the other Legion. On his left are his Thureophoroi and LH. 2 of the Pikes are in a piece of Soft Sand and as a result are severely disordered. Steve will be the 1st of 3 experienced players this weekend to be unaware that severely disordered troops cannot form part of a battle line which will slow his advance somewhat. 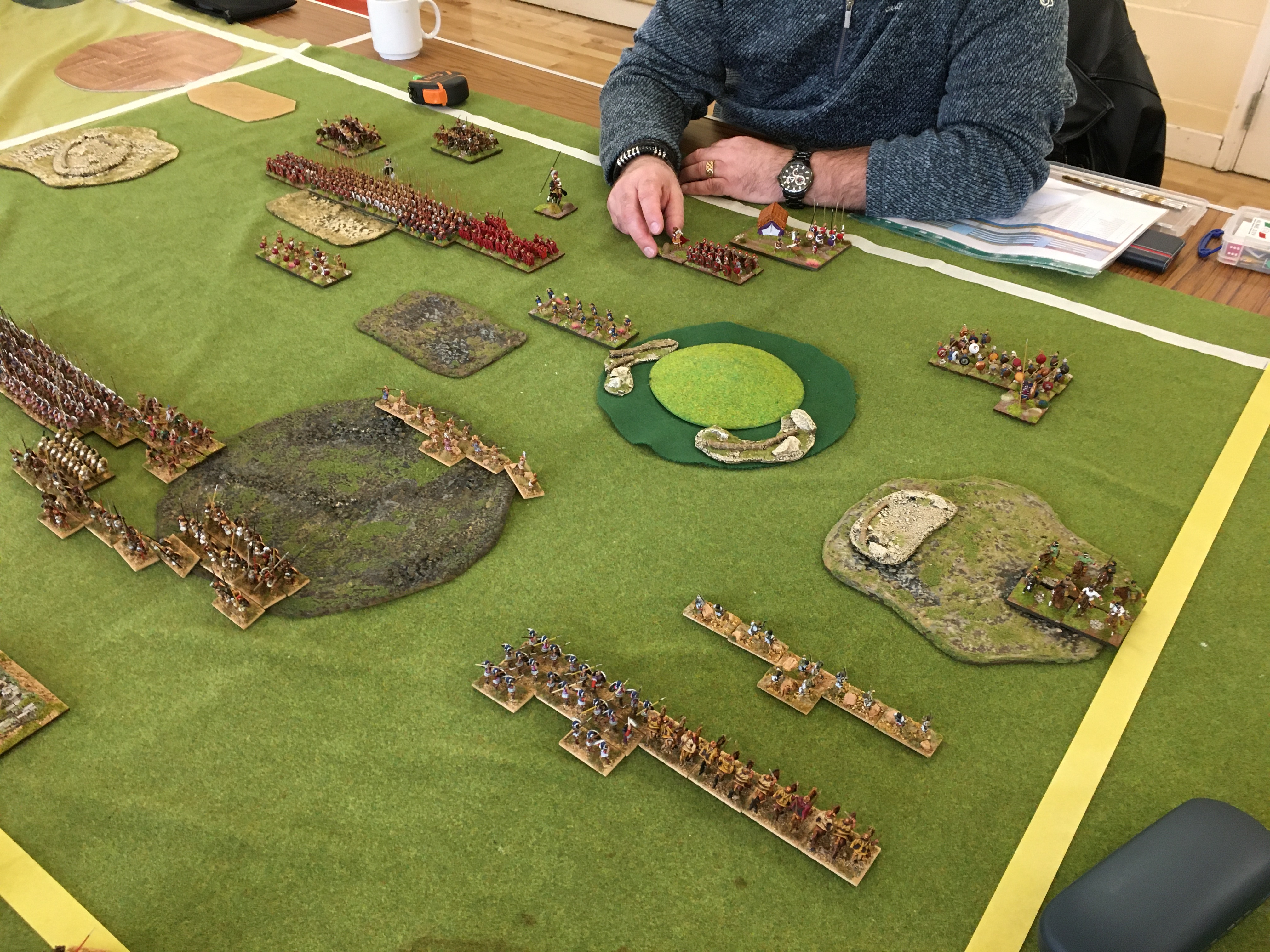 This is my deployment. On my right I have my Thorakitai to bully Steve’s Thureophoroi. They are supported by my slingers who in turn are supported by the protected cavalry. Should be enough to win the flank and take the camp. My LF Javs are opposite Steve’s LF bow and in front of both Thureophoroi, Thracians and 4 base Legion. The Thracians are opposite Steve’s Thorakitai. I then have my pike, 6 base Legion and cavalry. 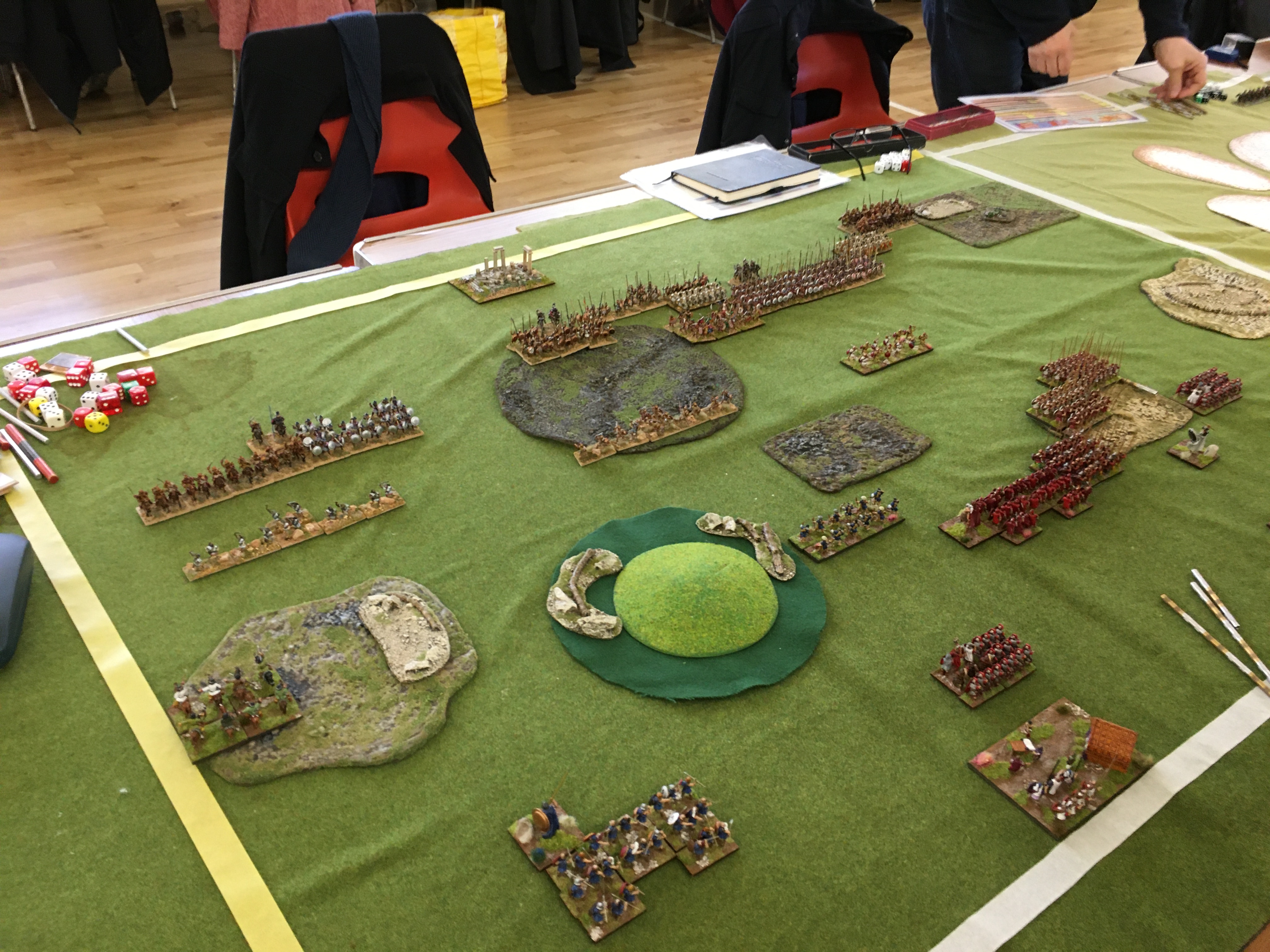 Steve won the move dice roll and advanced. The Average cavalry have moved to the left to provide rear support for the Thorakitai. I also pushed forward and in an early missile exchange Steve’s LF bow are disrupted. 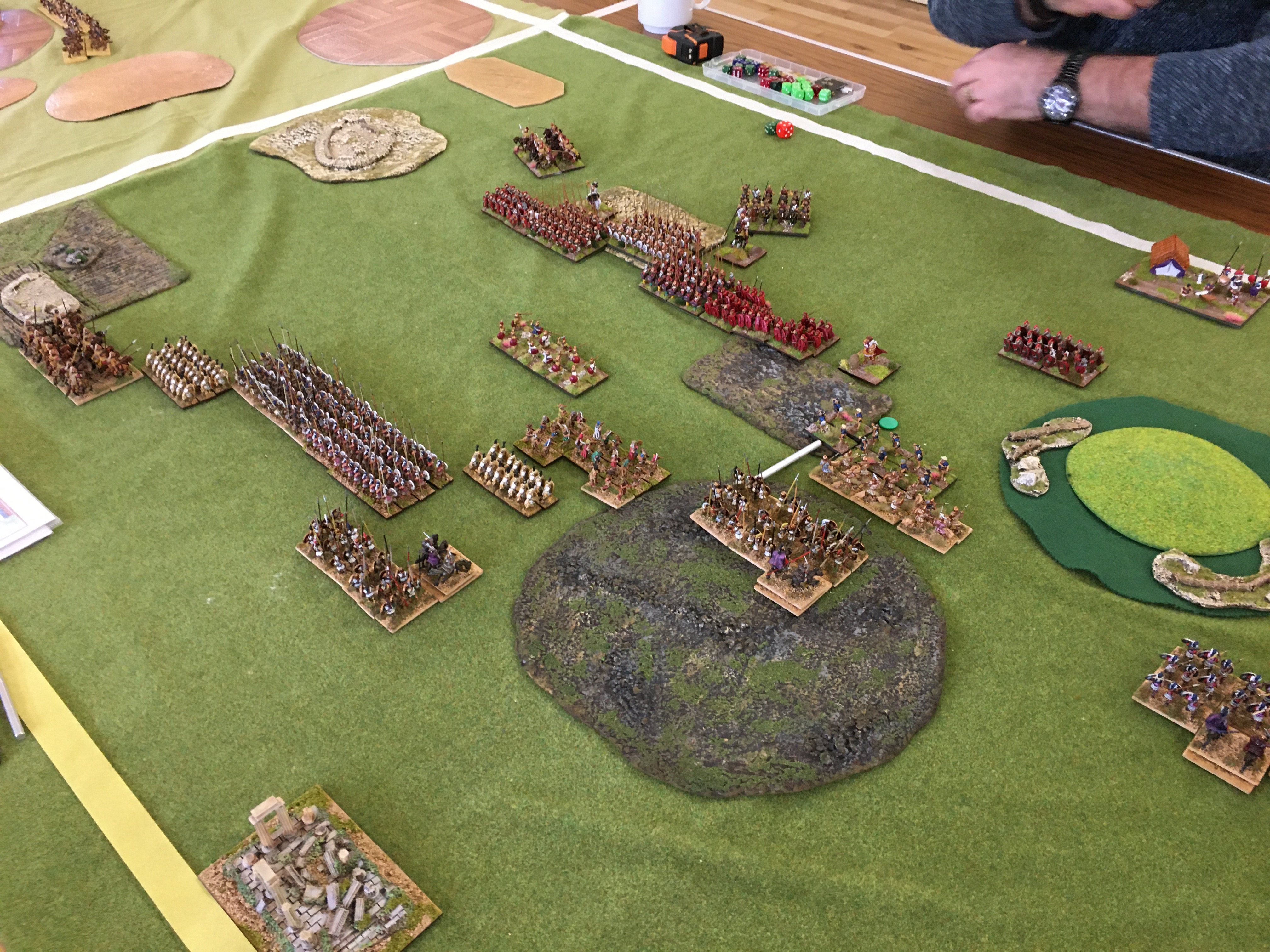 I am pressing forward on the right and in the centre whilst holding back on the left. Sounds strangely familiar. Steve’s pike are now clear of the SS but there is quite a gap between his Legion and the rest of his line. 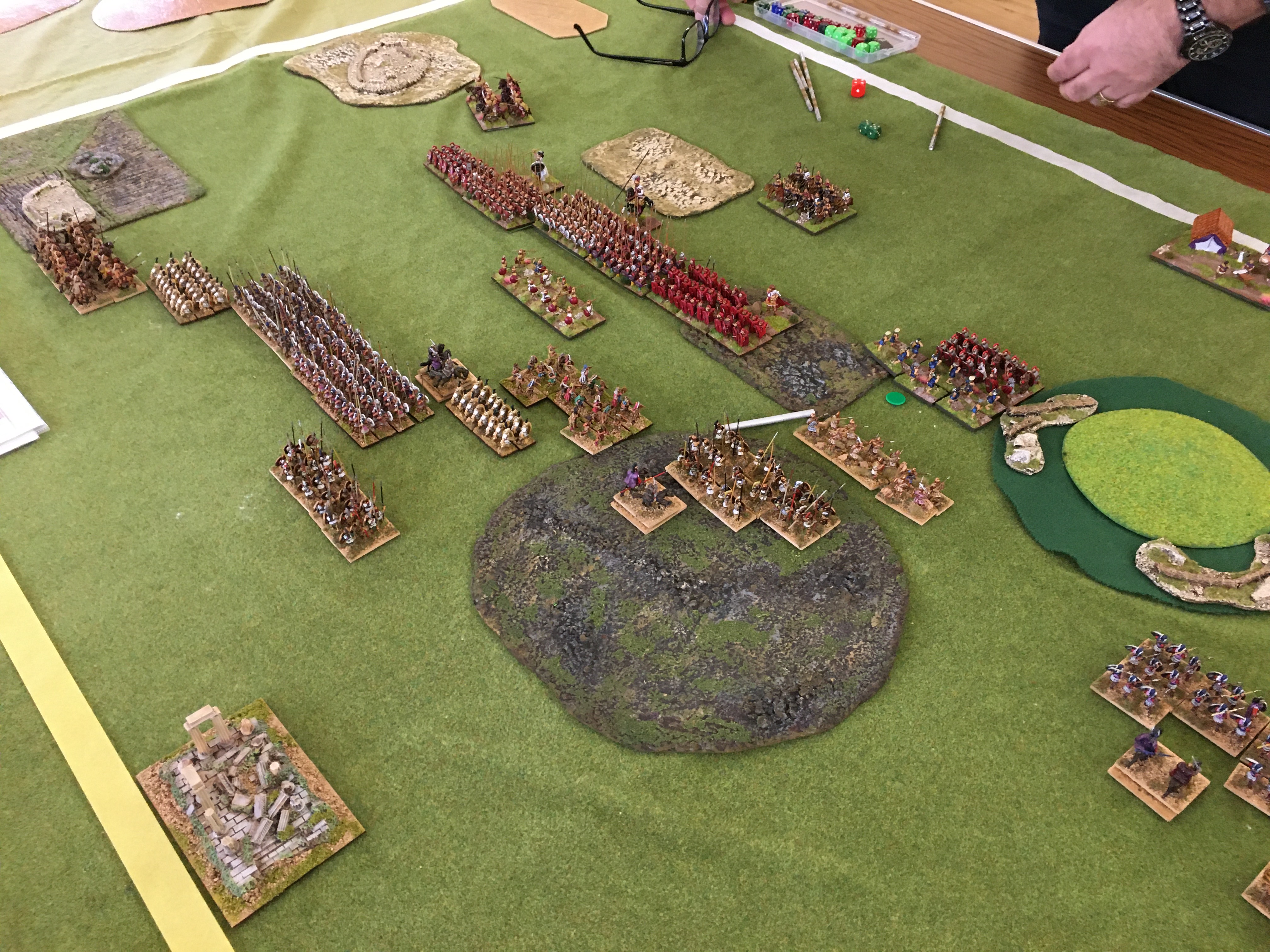 As the lines close my LF charge off Steve’s bow. This will slow his Legion. Seeing this I turn my Thureophoroi and use a General to push the 4 base Legion up to support. This is designed to slow Steve’s advance whilst I try and engineer things in my favour. 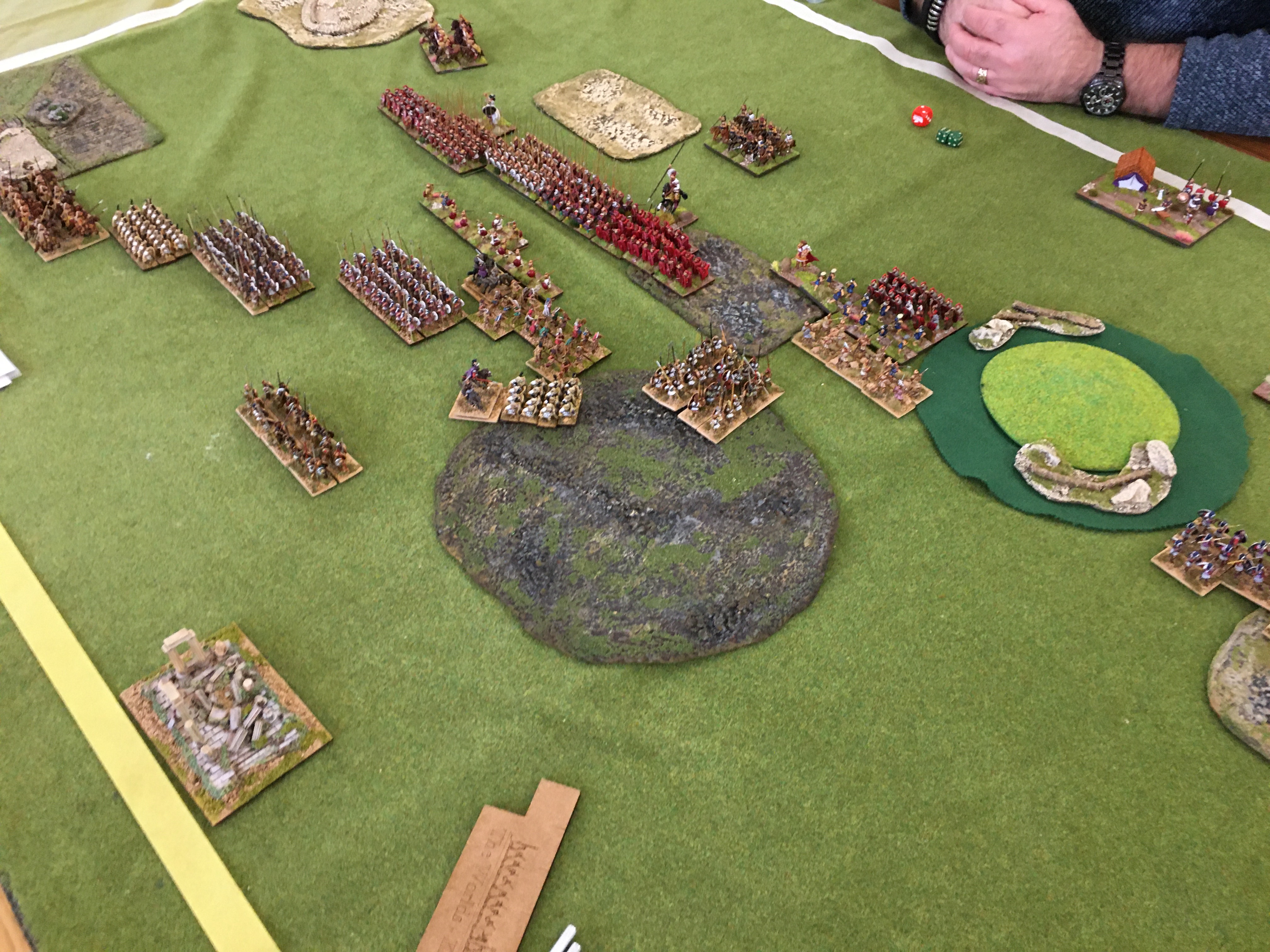 Over on my right Steve has collapsed his flank and marched out of danger – at least for now. 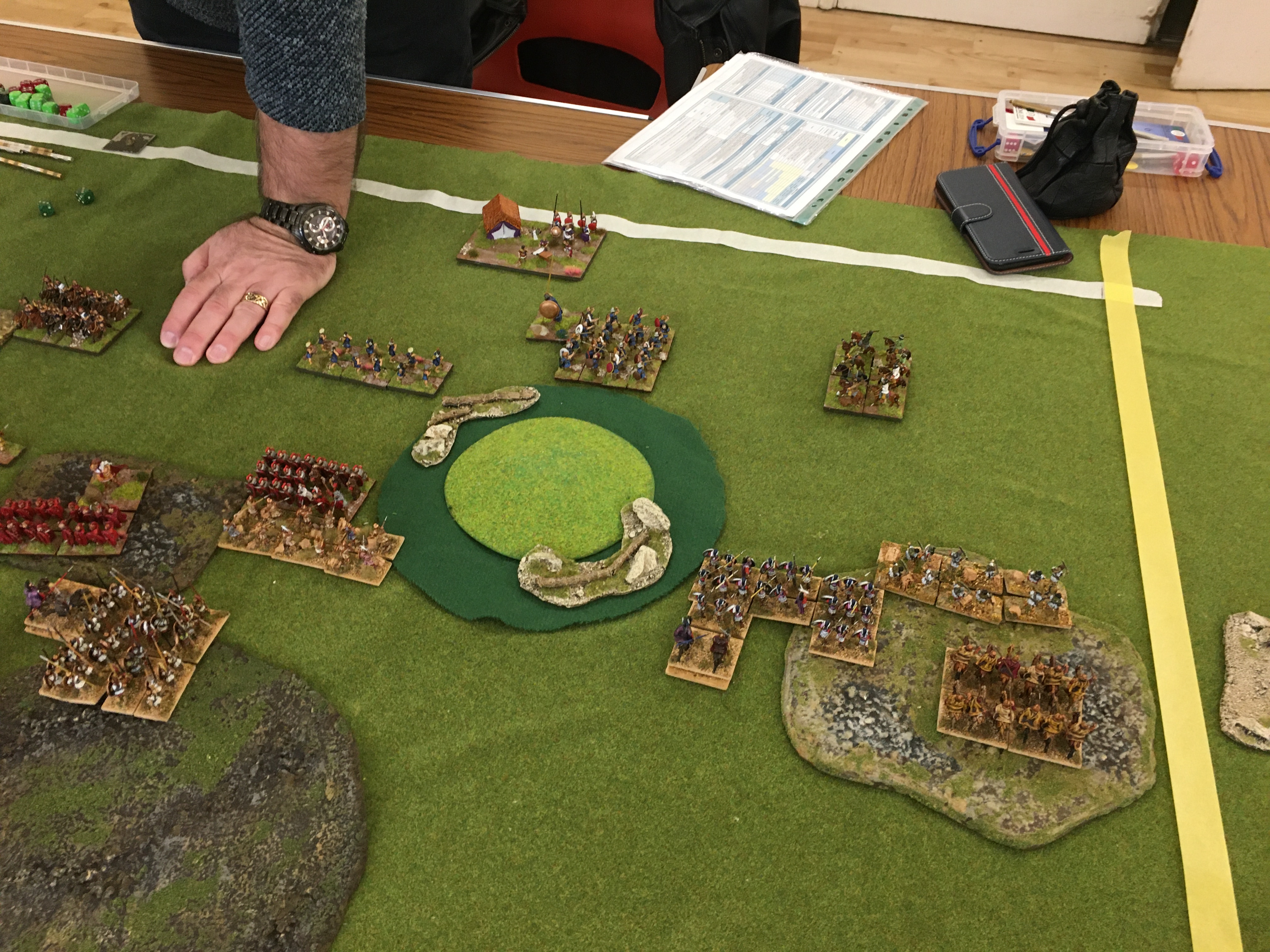 The main clash is now imminent. I have withdrawn my LF to keep Steve’s Legion out of the action for as long as possible. The Legion on my left does not have a target either. 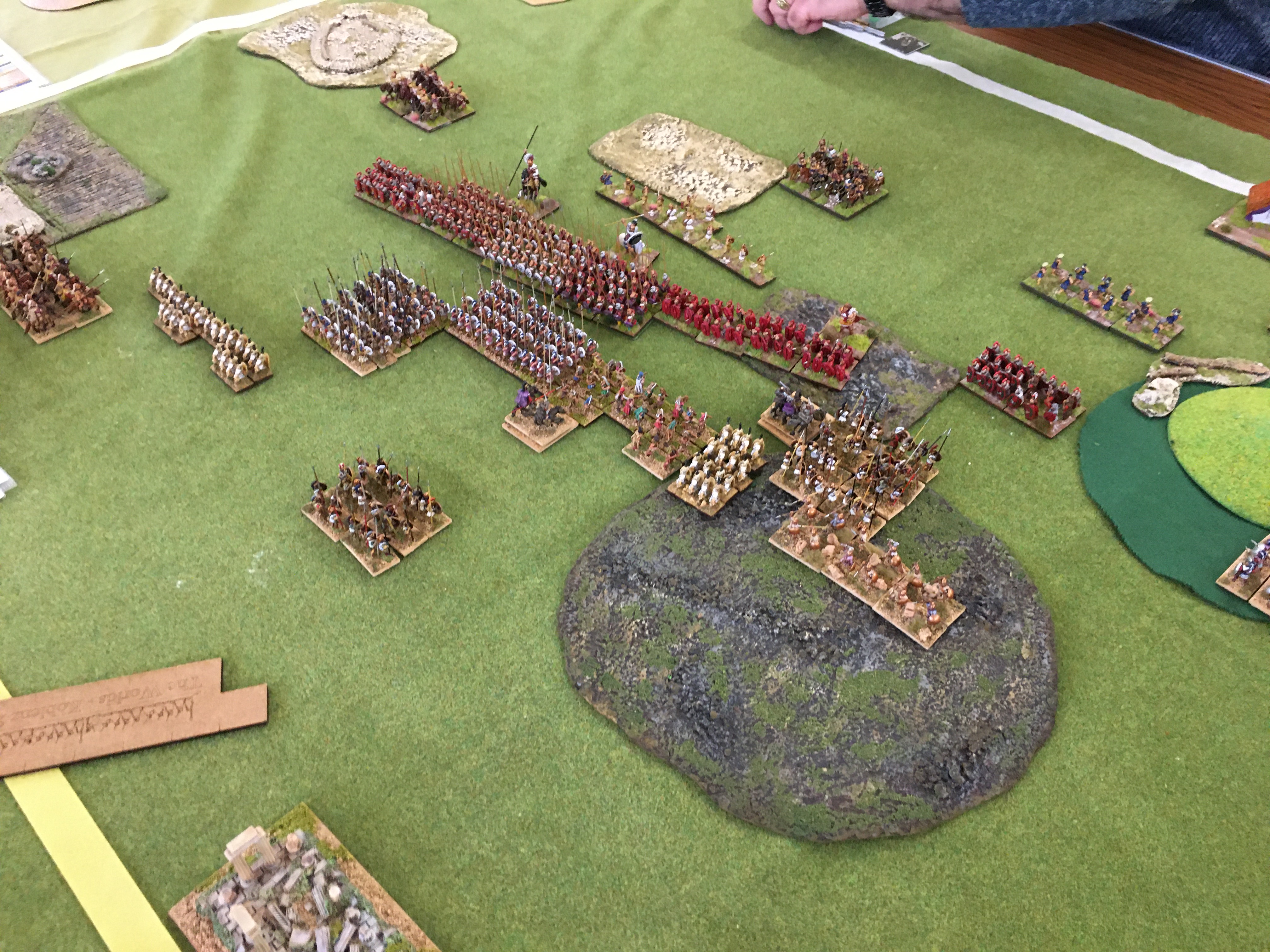 The lines meet and I have the better of the dice initially. A pike BG and Steve’s Thorakitai disrupt. Steve’s Legion contracts into a column to avoid my Thorakitai who are out of shot but have turned 90 degrees and advanced across the steep hill. 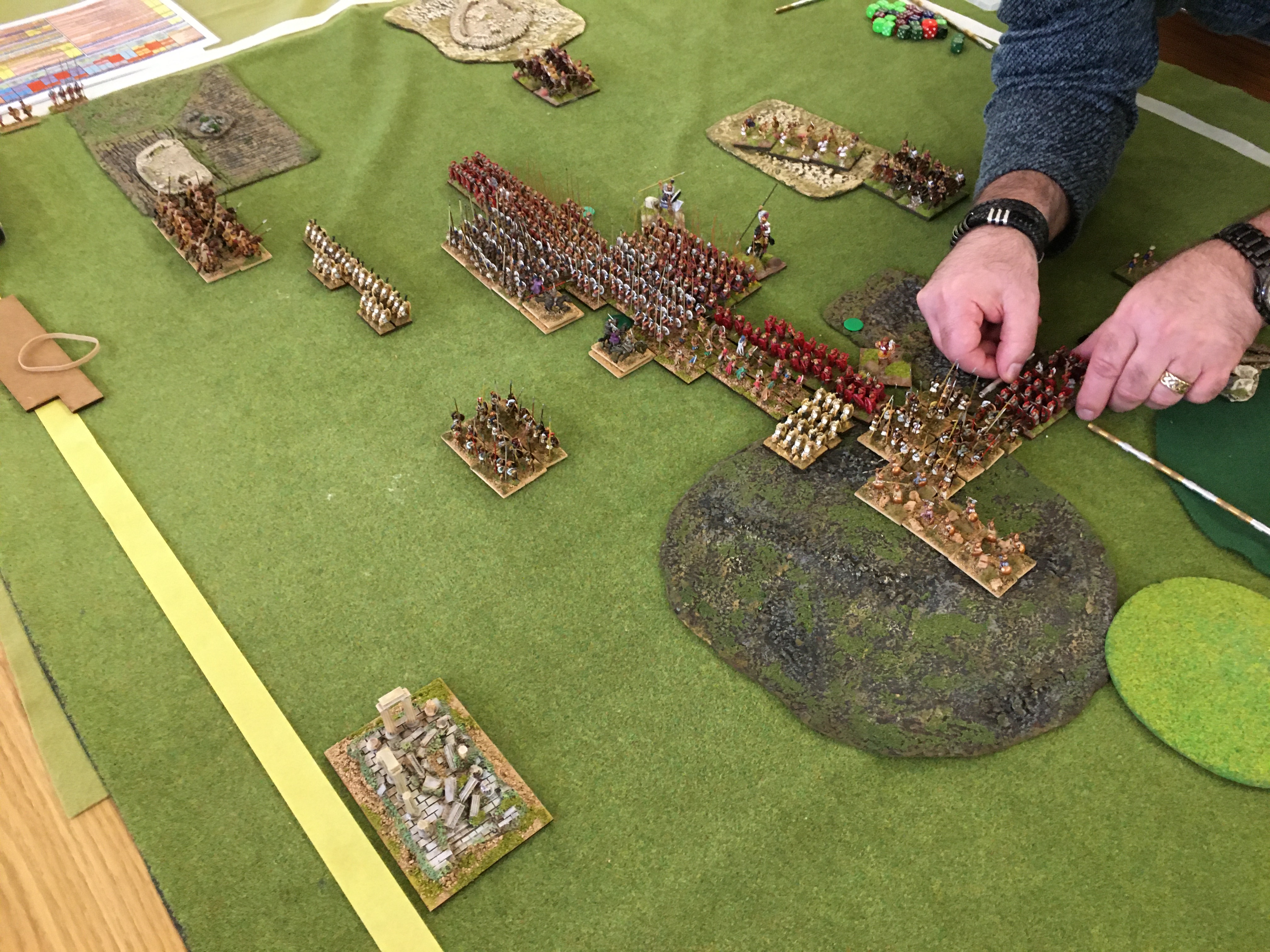 Another poor turn for Steve sees the disrupted pike break and the Thorakitai fragment. The right hand Legion disrupt and another pike BG is fragmented. 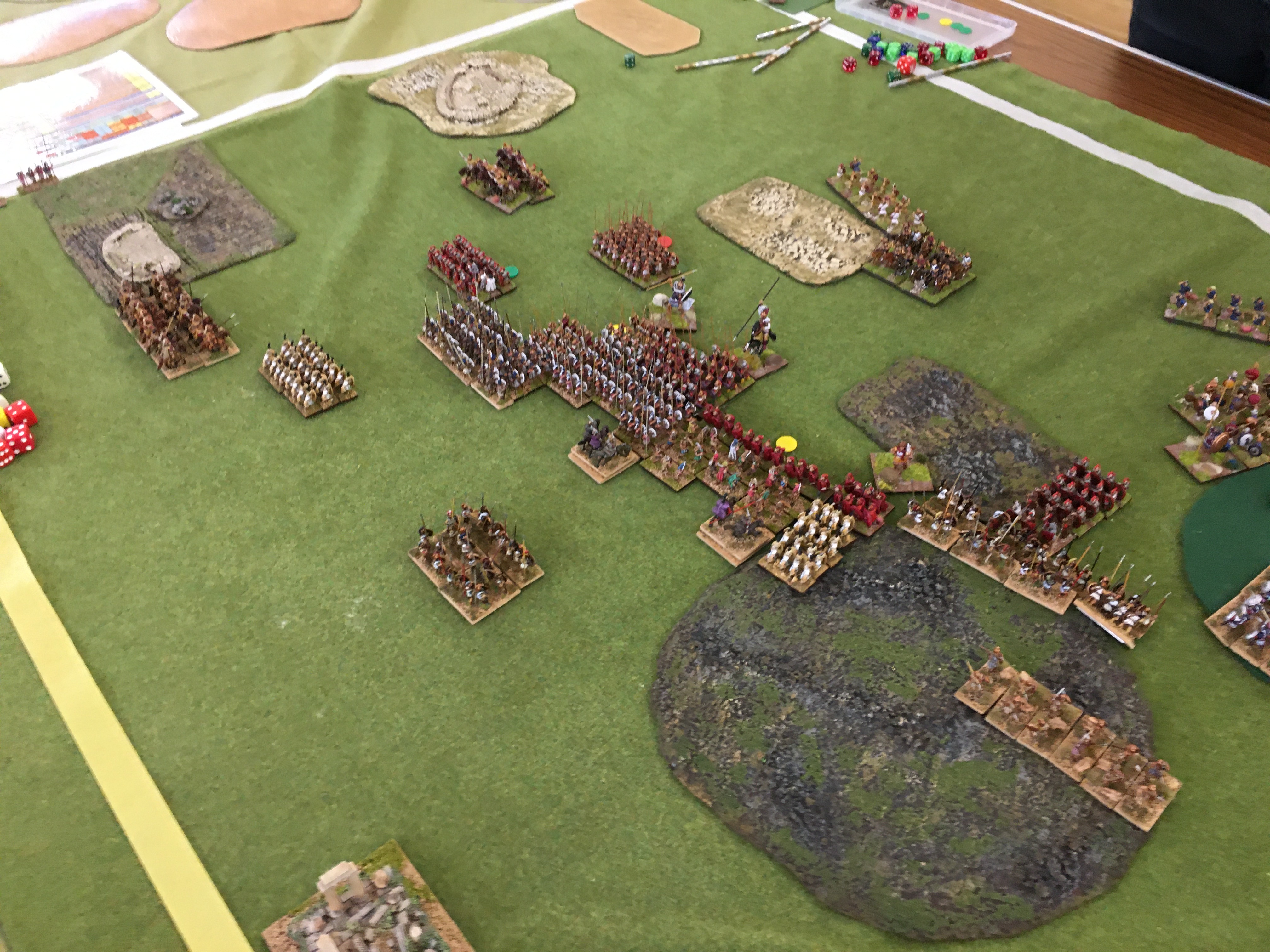 On my right my slingers are bullying Steve’s LH supported by the cavalry and making steady progress towards his camp. 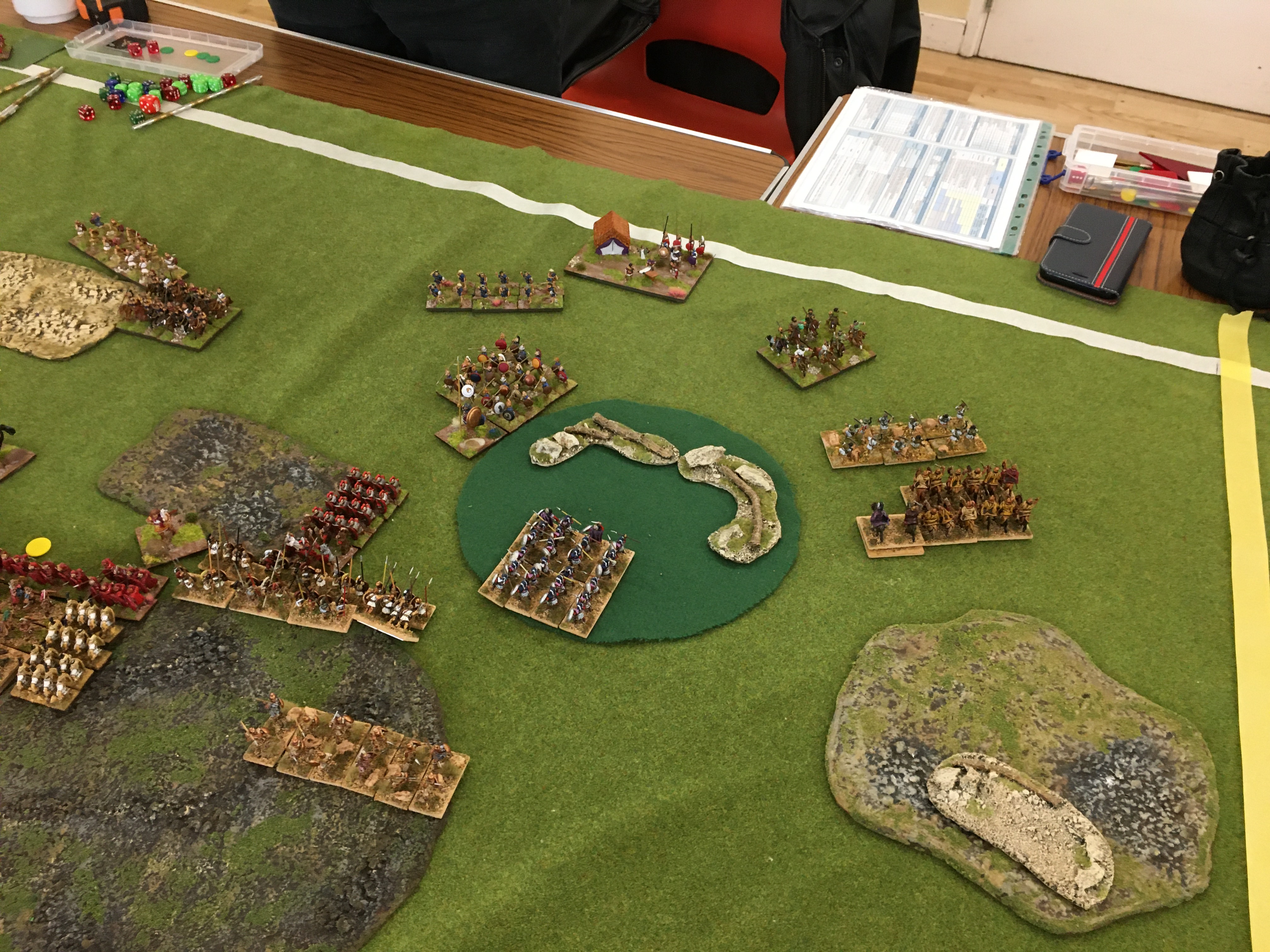 In the centre my Thracians have destroyed the Thorakitai and turned to fight the remaining pike BG. The fragmented pike have routed. My Thorakitai have expanded into line to threaten the Legion’s flank and the Thureophoroi. My 4 base Legion are also providing another threat. On my right Steve’s LH are shot to disrupted. 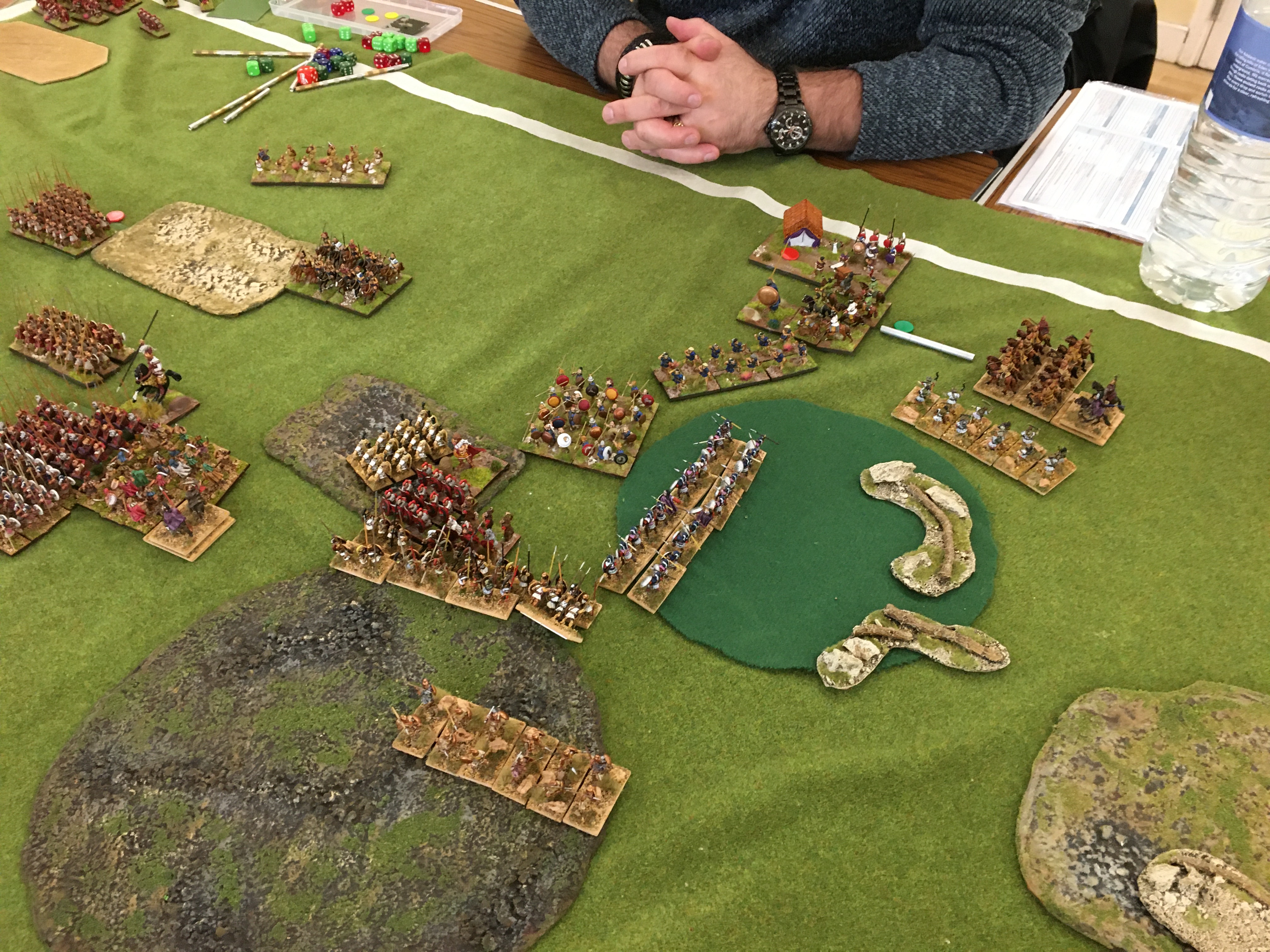 Nothing has gone Steve’s way up to this point and my pike turn to engage the disrupted Legion on my left. Steve’s remaining pike BG is fighting on gamely. 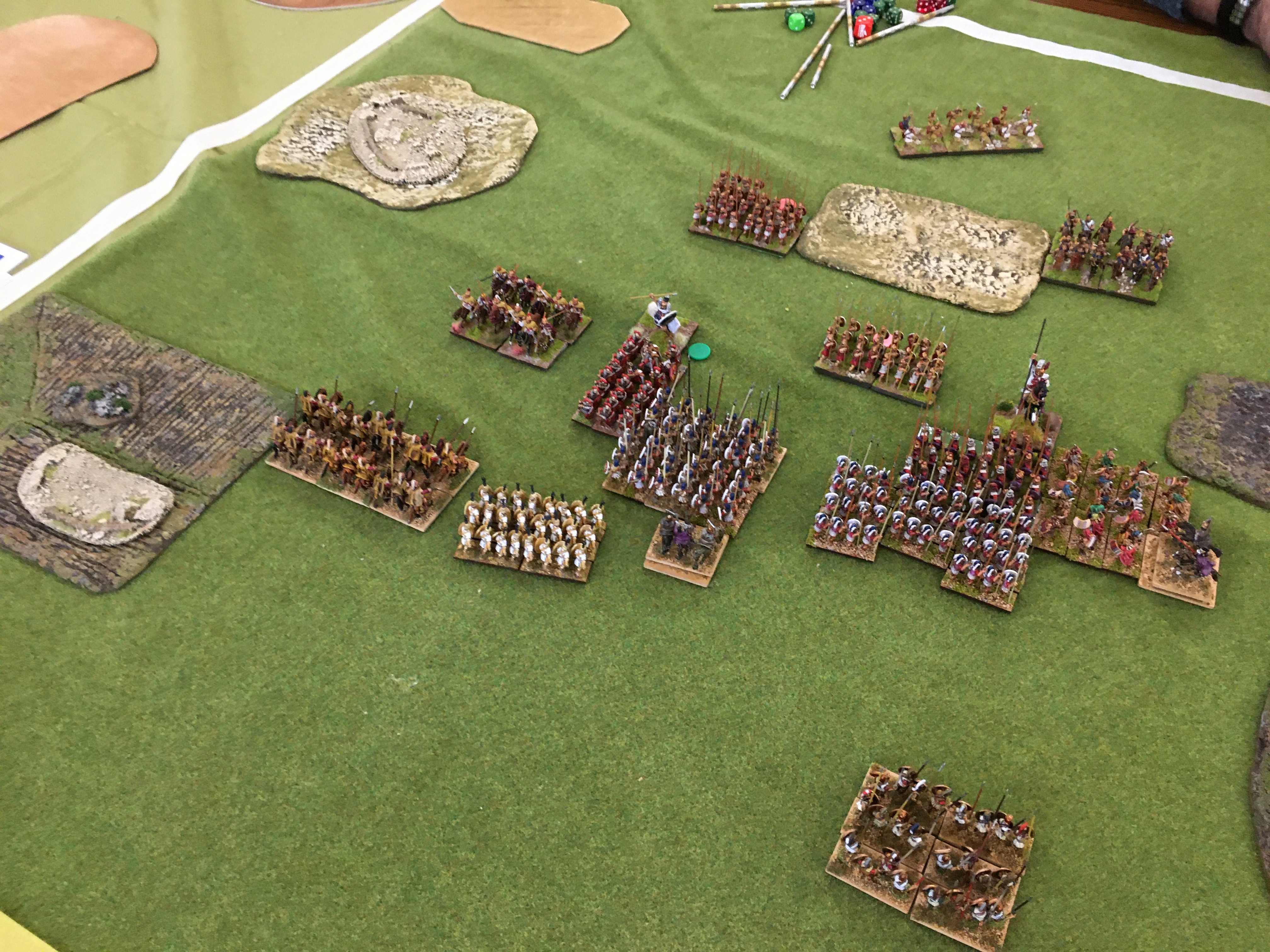 Finally Steve wins a combat. His Superior cav beat my average ones and even the IC can’t stop them disrupting. It’s all too little too late though as the Legion fall to fragmented. 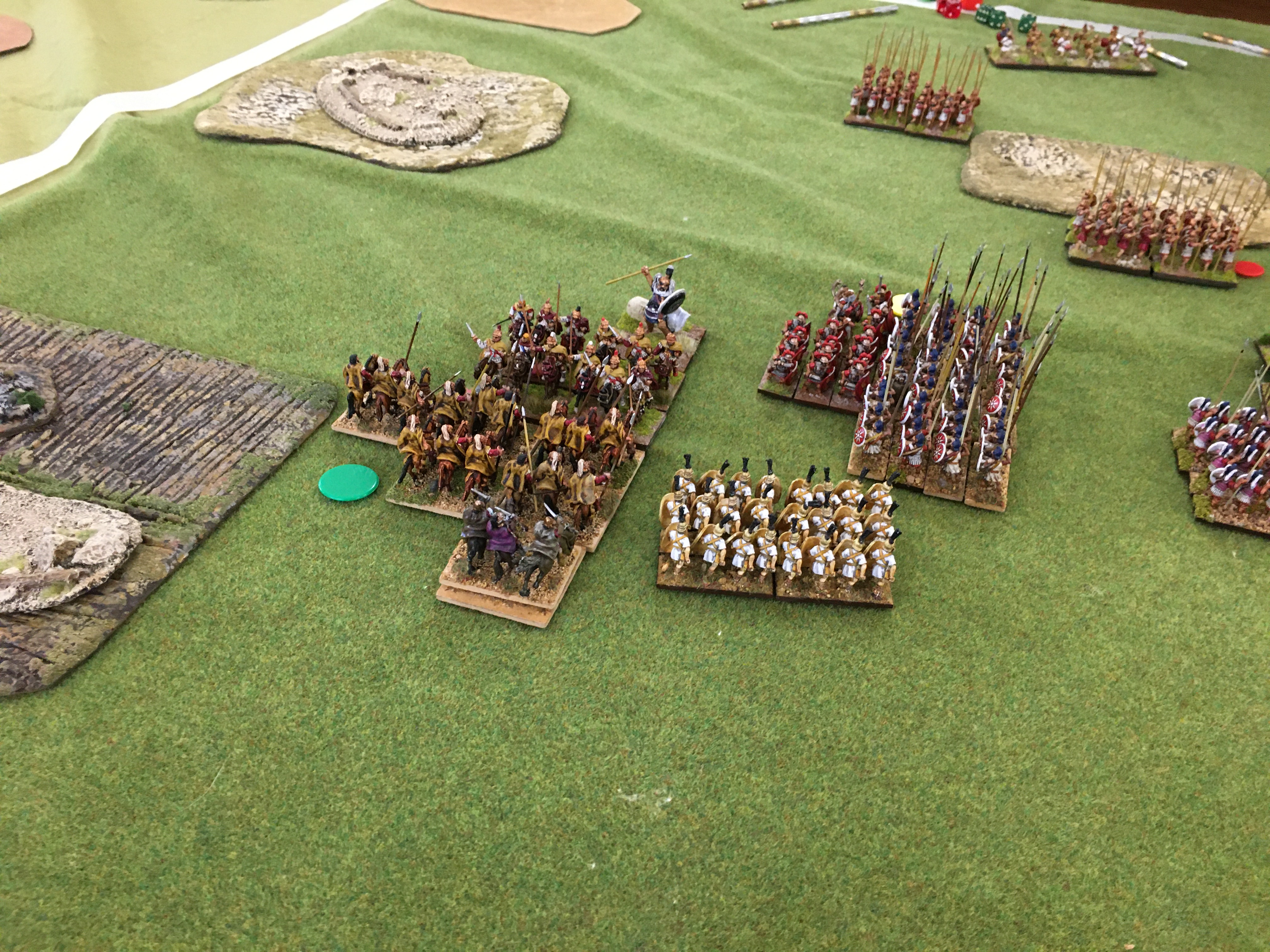 My cavalry break shortly afterwards. But the camp is in charge range of my protected cavalry and that is enough to take down Steve’s army. I must have lost something else because the final score is 33-4.

Steve had appalling luck throughout the game and virtually every 50/50 combat went my way. It could so easily have been the other way around. Winning initiative proved to be very important once again.
Pete
Top

Re: Belgarum - Game 2 vs Ptolemaic

Thanks for posting, Pete.