So the last game of the weekend and amazingly it’s another Ptolemaic Civil war vs Phil Powell. I’m quite relieved to have avoided the Classical Indians. I was ripped apart in a practice game by Martyn Simpson. Paul is still leading the competition but he has a tough game vs Graham Briggs who is using Classical Indian which is the rock to the LRR scissors.

Fortunately for me I won initiative and chose Desert. As with the other civil wars deploying second was to prove quite an advantage so that I could engineer the best match-ups.

This is my deployment – although I think some BGs have already moved. My LF Javs have already charged Phil’s LF who have evaded. On my right I have my 6 base Legion supporting a Pike BG. Out of shot are my LF Sling who have been sent to delay Phil’s left flank. I have both MF lined up to attack through the rough alongside the 2nd Pike BG. Then come the Thorakitai and Thracians who are opposite Thureophoroi & Thorakitai respectively. It’s worked twice so far so hopefully it will do so again. The 4 base Legion is in rear support as is the Prot Cav. My lancers are on my left flank. 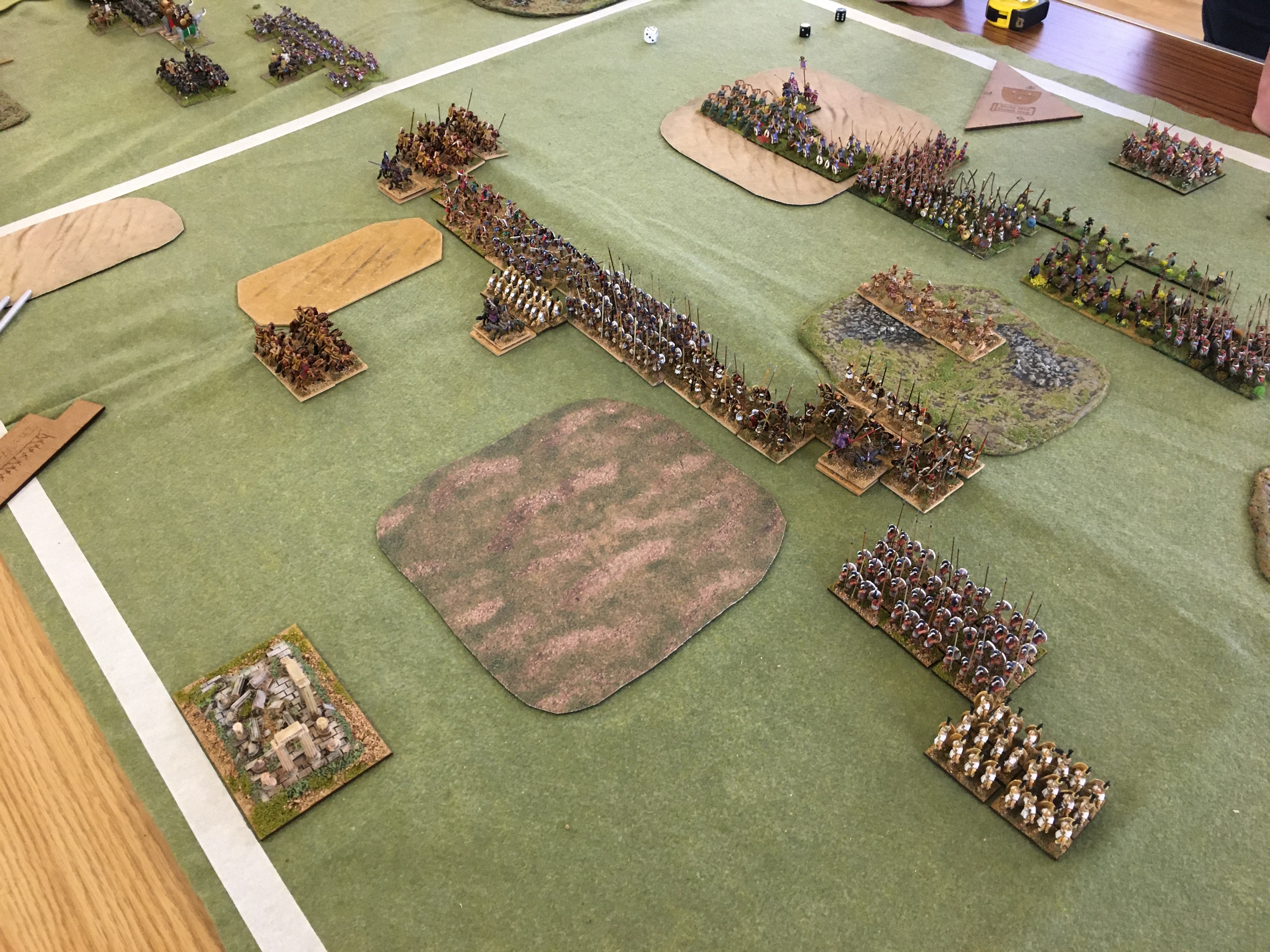 This is Phil’s deployment. There is Soft Sand on both his flanks. On Phil’s right within the SS are a 6 of Thorakitai and an 8 of Thureophoroi. Then come 2 Pike BGs with Romans and lancers behind. The 2nd Thureophoroi is positioned to defend the rough flanked by the 3rd Pike BG. Then come Thracians, the 2nd Thorakitai and 2 Legions. Note that the Legion without the General has bases in the SS so is unable to march. Phil completes the set of players who missed this. 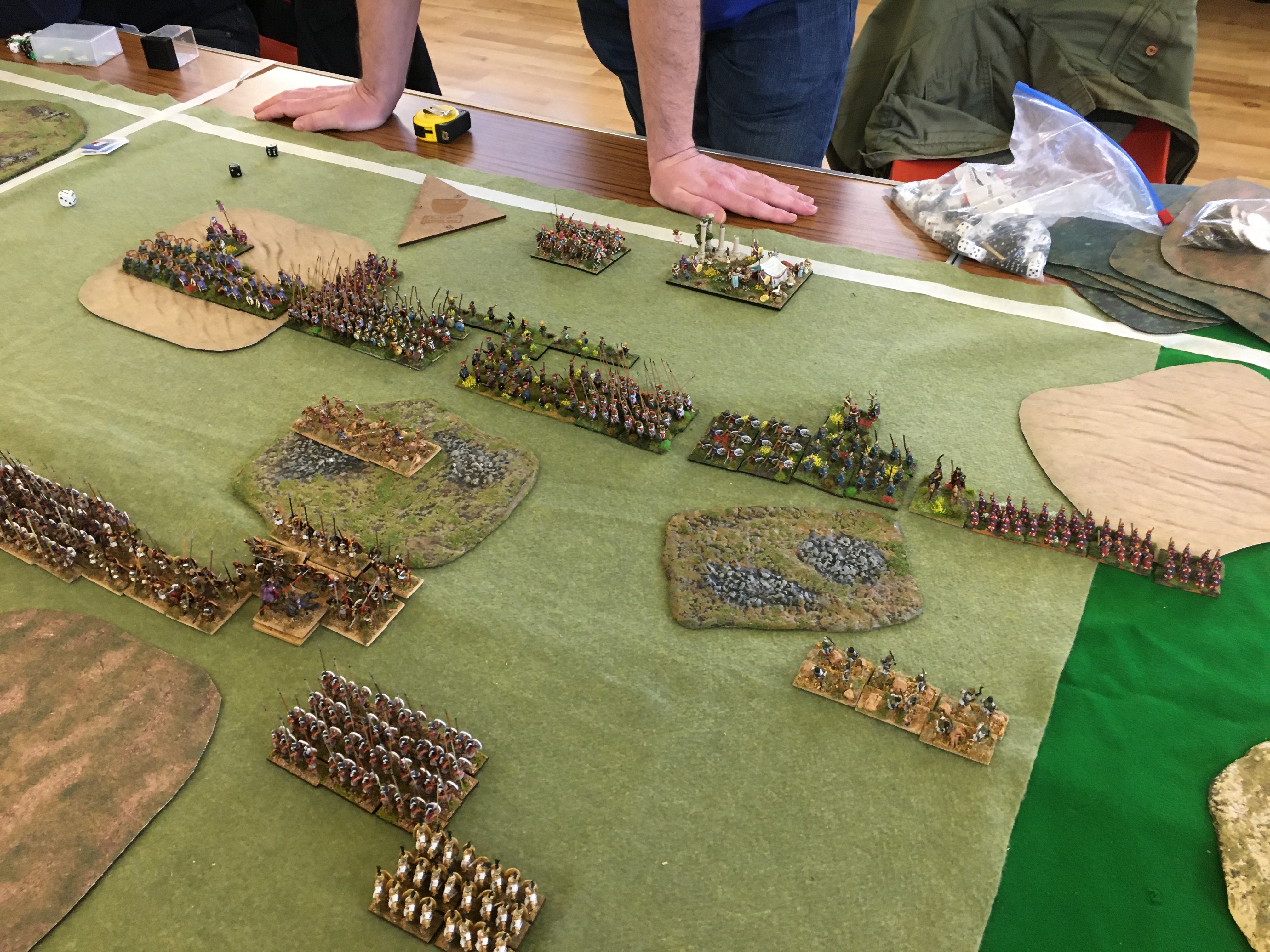 Phil sees the danger to his right flank and starts to withdraw back into the SS immediately. The LF Slingers are back trading shots. The lancers are heading across and the Legion has also about faced to re-deploy. 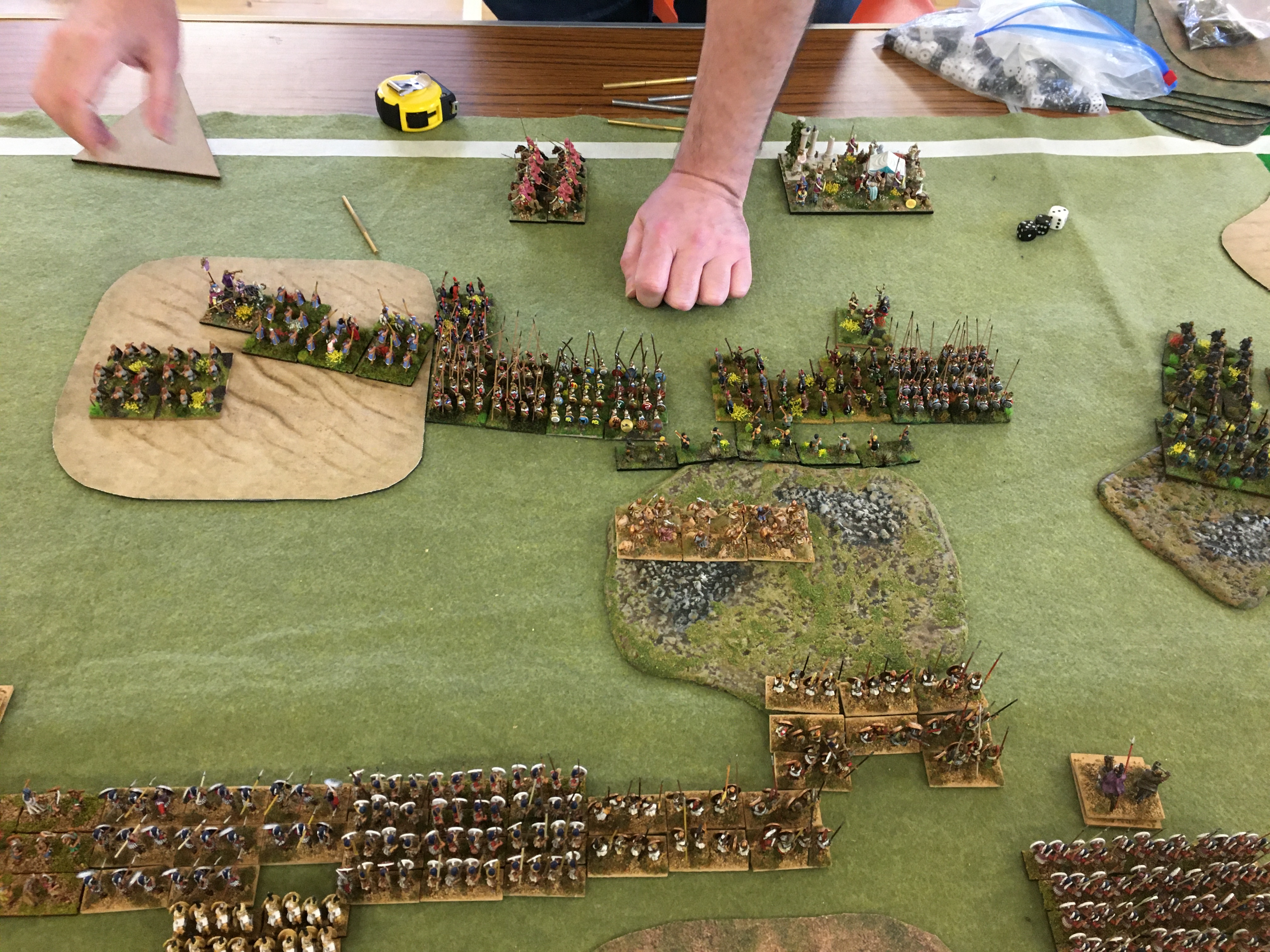 I just keep going. My LF charge again and Phil decides to stand this time. I wasn’t entirely sure why because his LF’s formation meant no-one could help them. Still out of shot my LF Slingers are holding up Phil’s left flank. 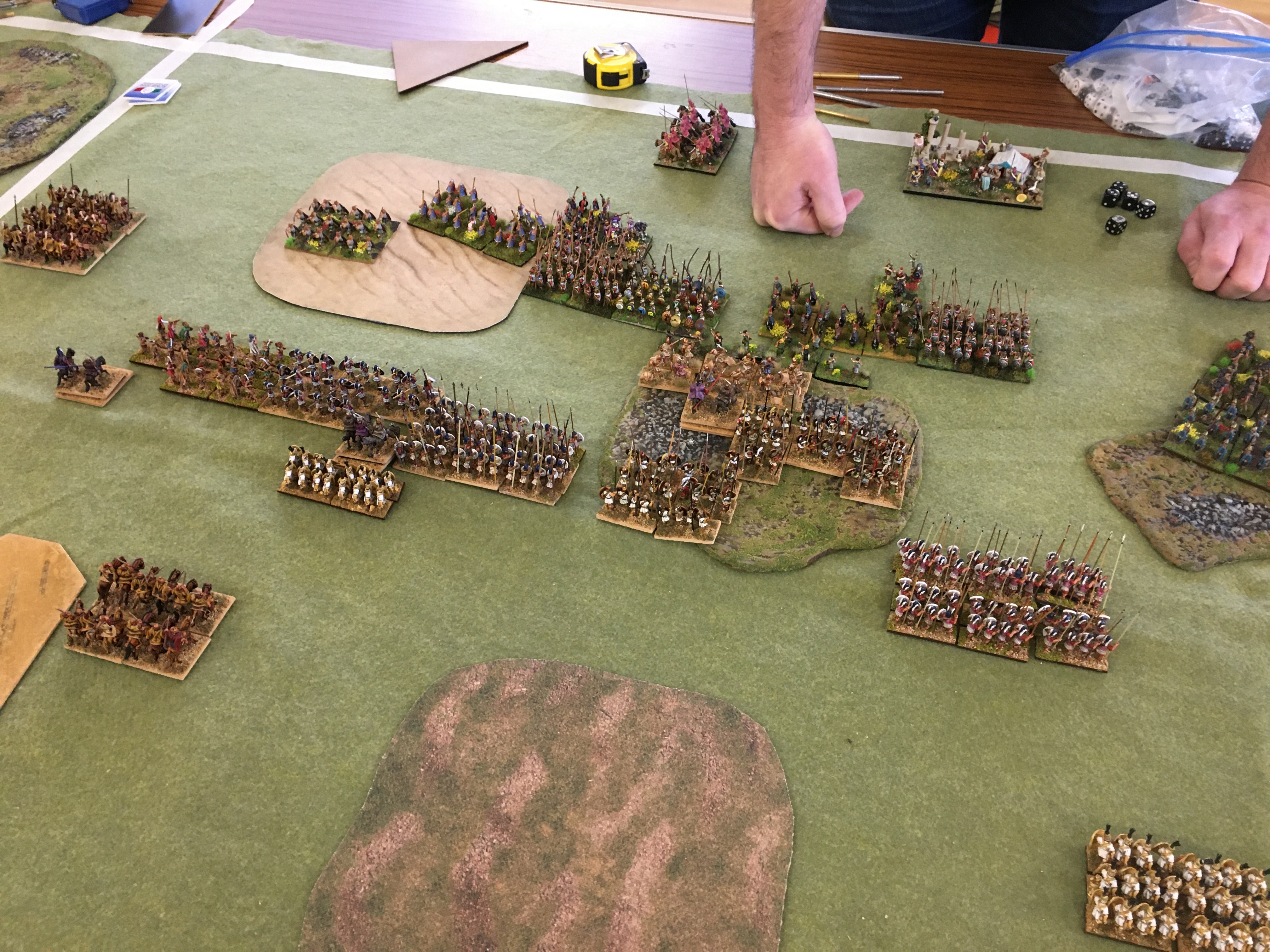 Phil continues to fall back in the SS. His Legion are scooting across and his LF have lost a base. 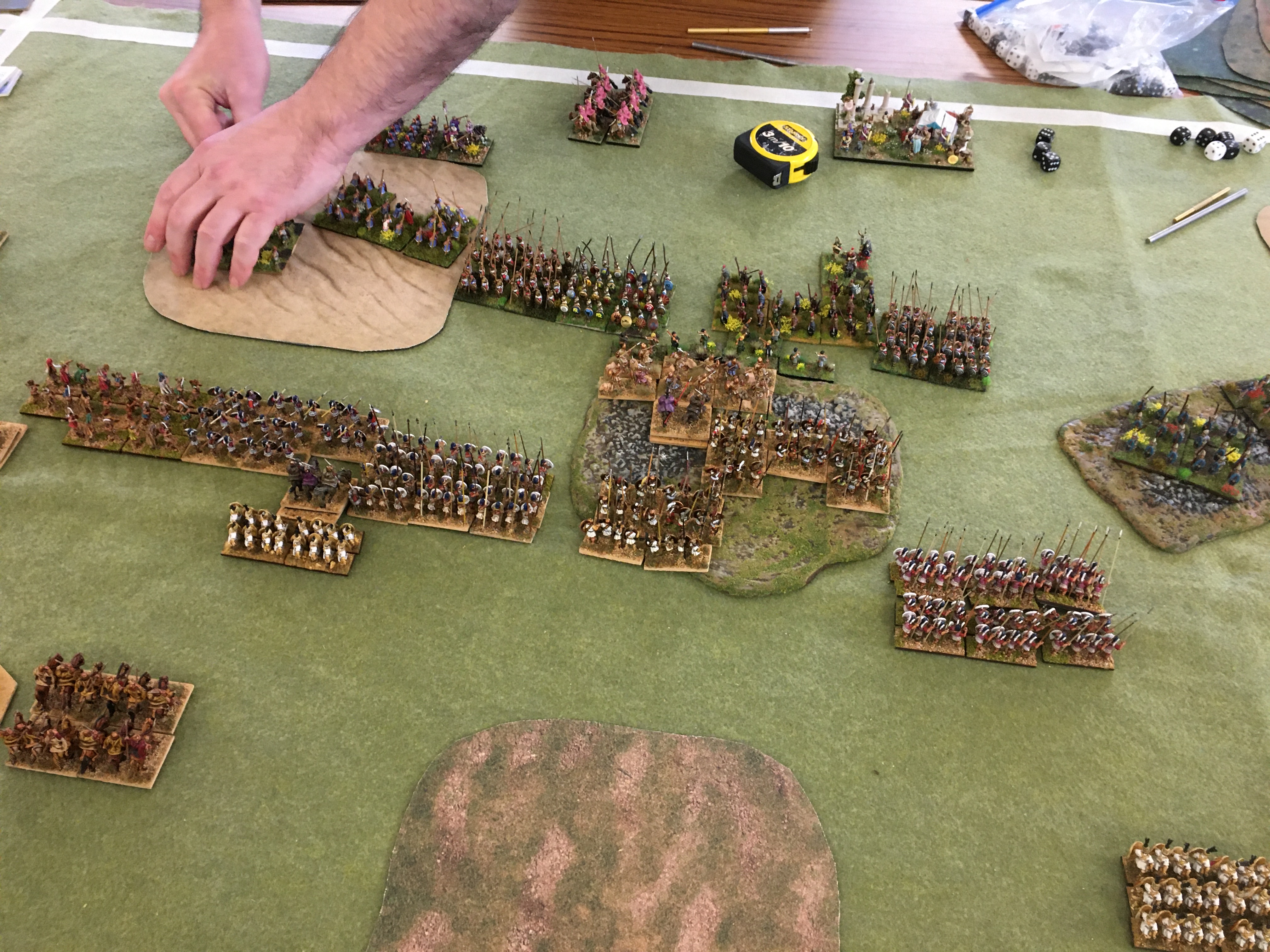 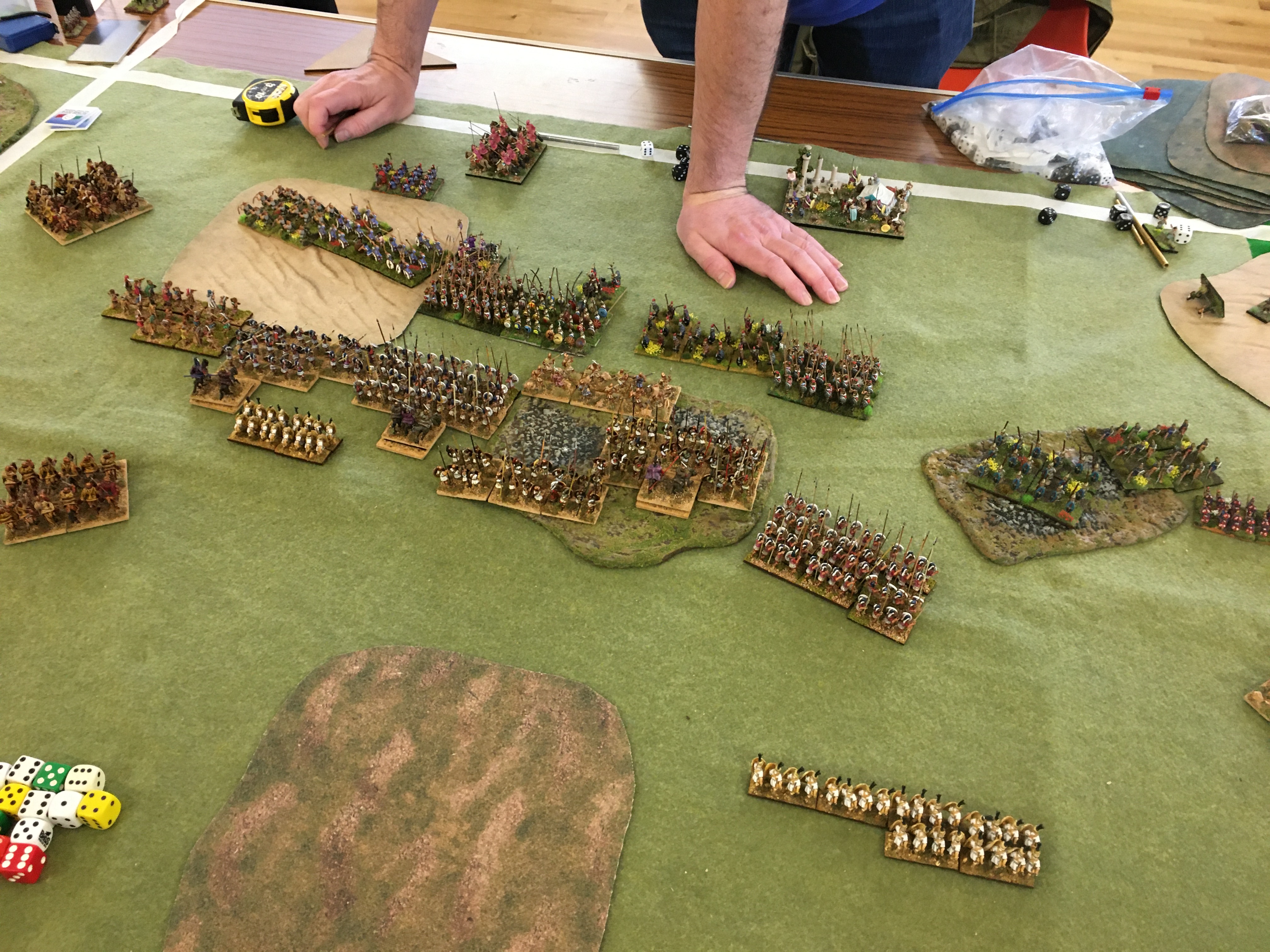 Phil elects to charge with both Pike but holds the MF. The initial clash isn’t too bad. I lose a base but one of Phil’s Pike has lost a base and disrupted. 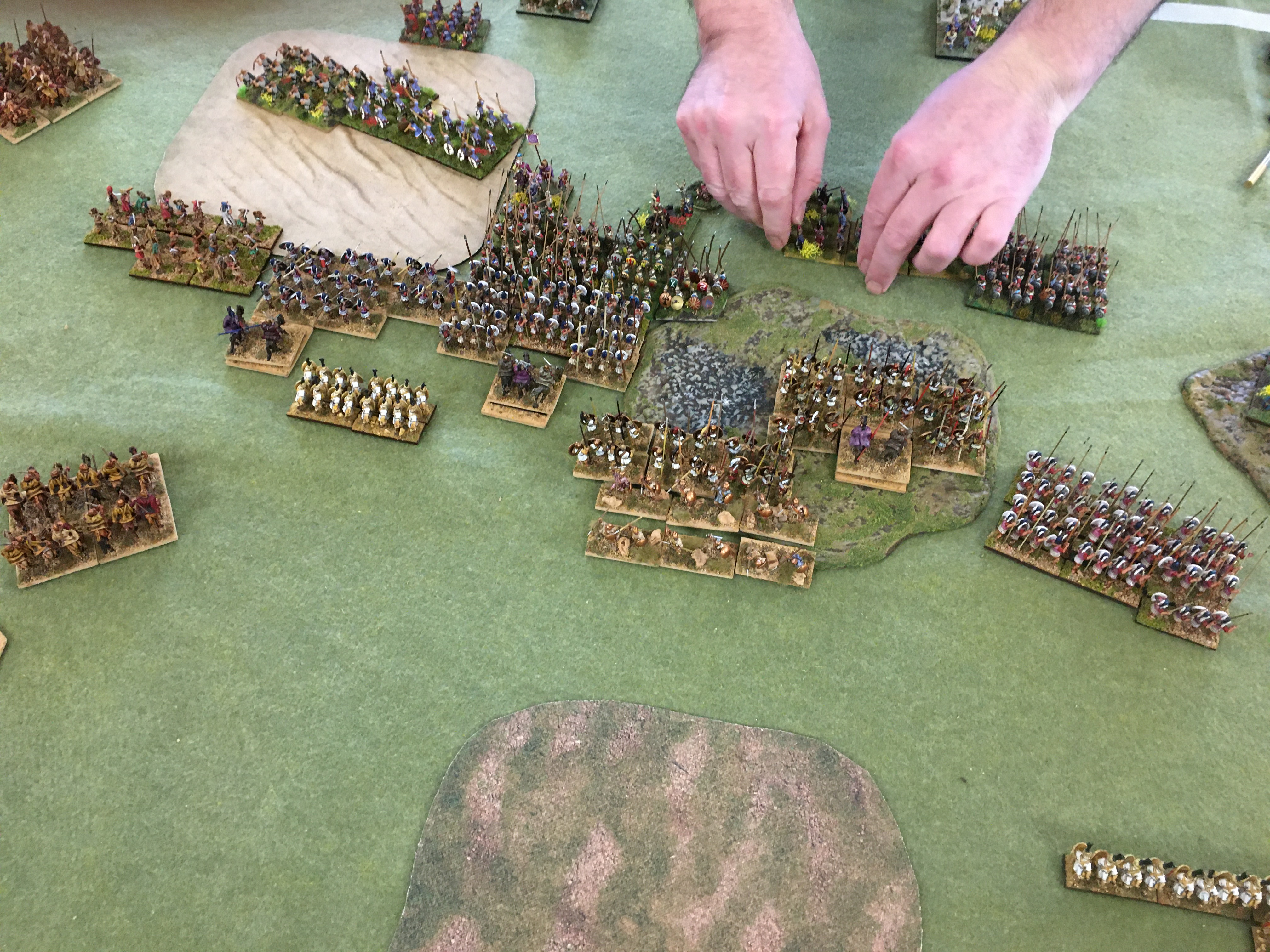 The Pike charge has opened up quite a gap between the MF in the SS and the Pike. My Thorakitai take full advantage and position themselves to flank charge the steady Pike next turn. In a bit of luck for me the disrupted Pike are now fragmented. Phil has charged his MF and Pike into my MF – a fairly even fight. I have also charged the fragged Pike BG in column but it passes its test and does not rout. 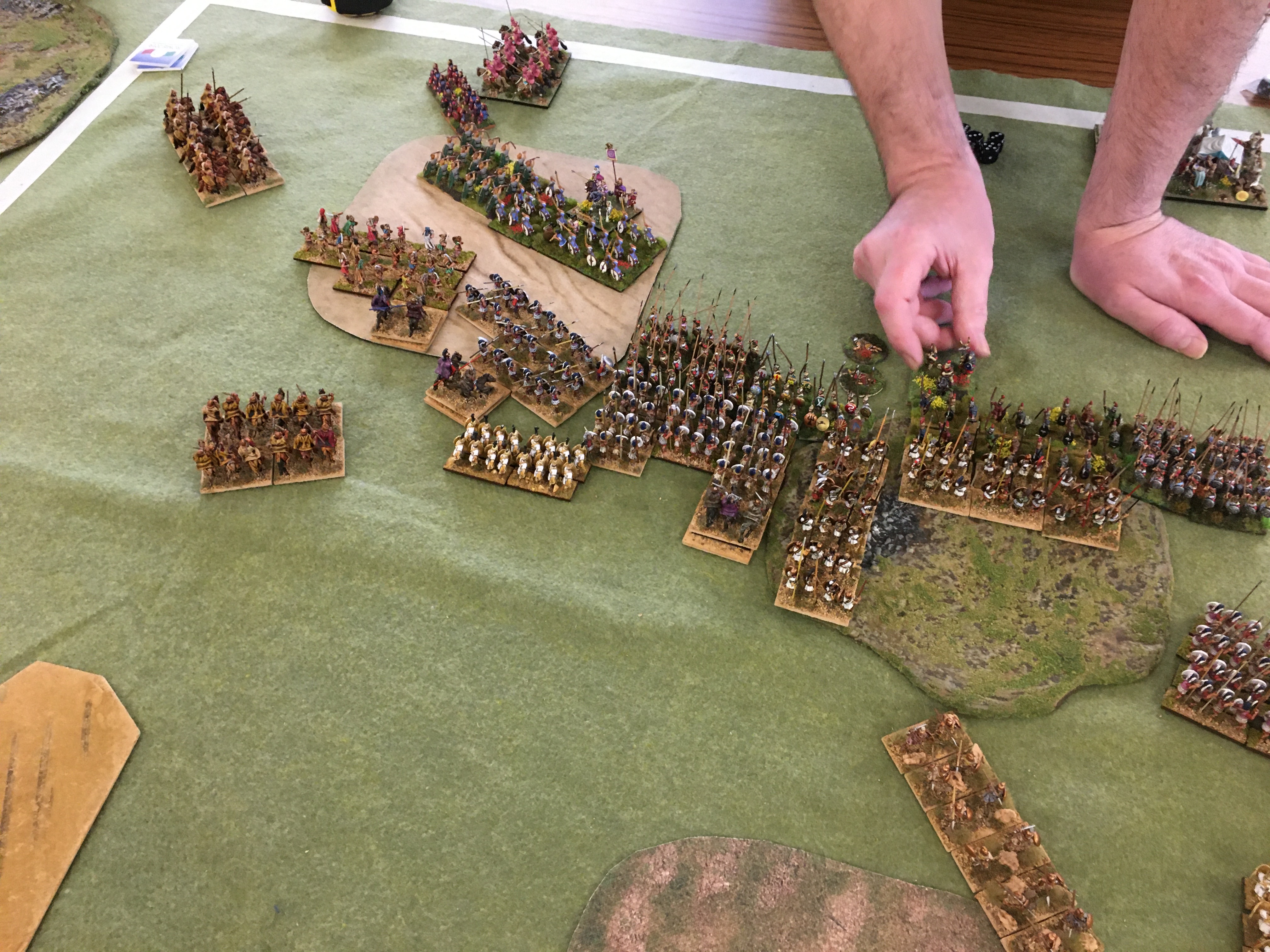 The next round of impact and melee seems some extreme dice again. My MF column is fragmented but the flank charge has done for the steady Pike. The Fragmented Pike have also routed. Unfortunately for Phil the MF in the SS have disrupted as well. My Thracians have also charged the Thorakitai. 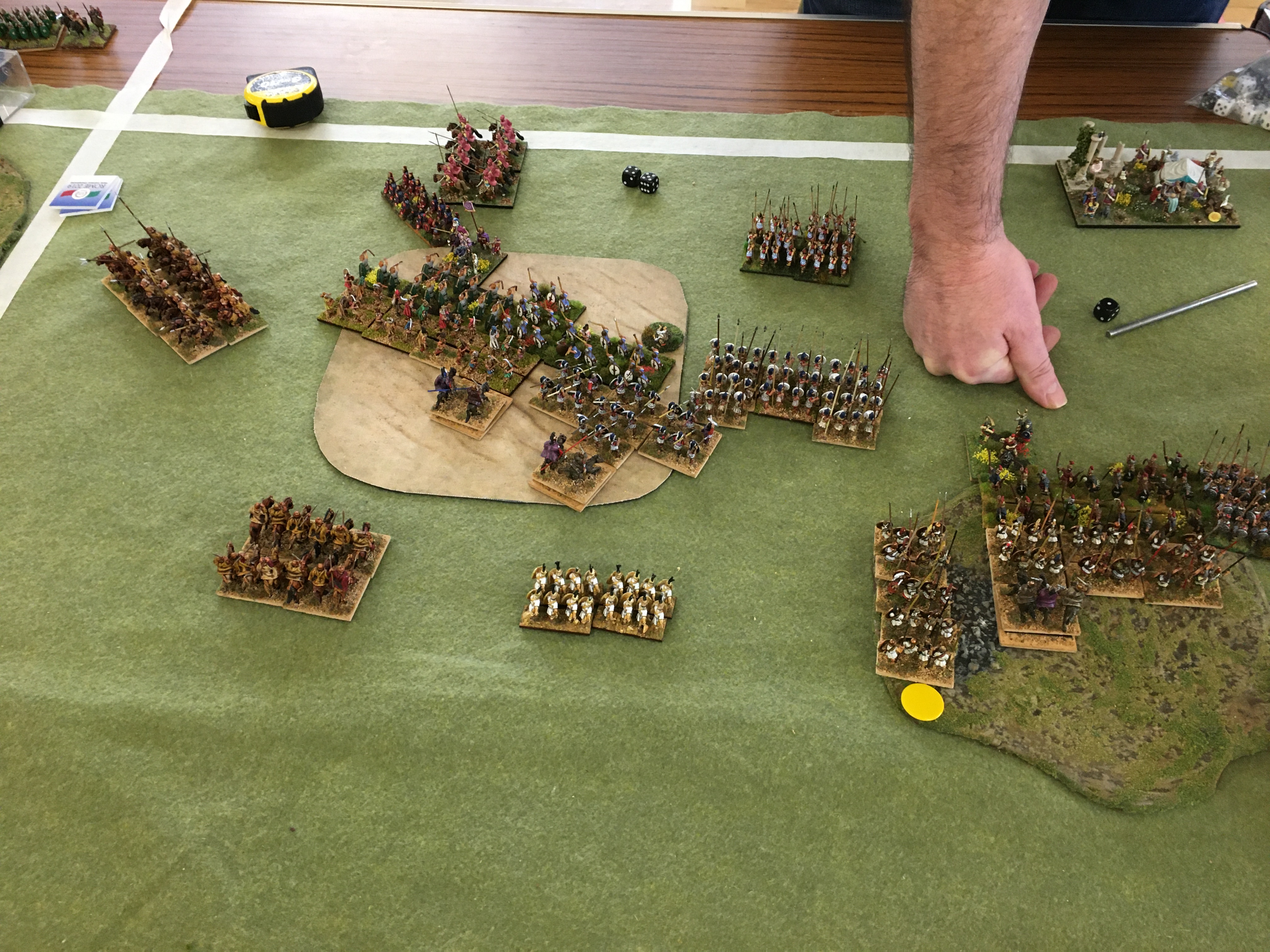 On my right Phil has 4 unengaged BGs including 2 Legions which is the best place for Legions to be when they’re on the other side. My camera shy slingers are also in shot and joined by the LF Javs who are getting in the way. 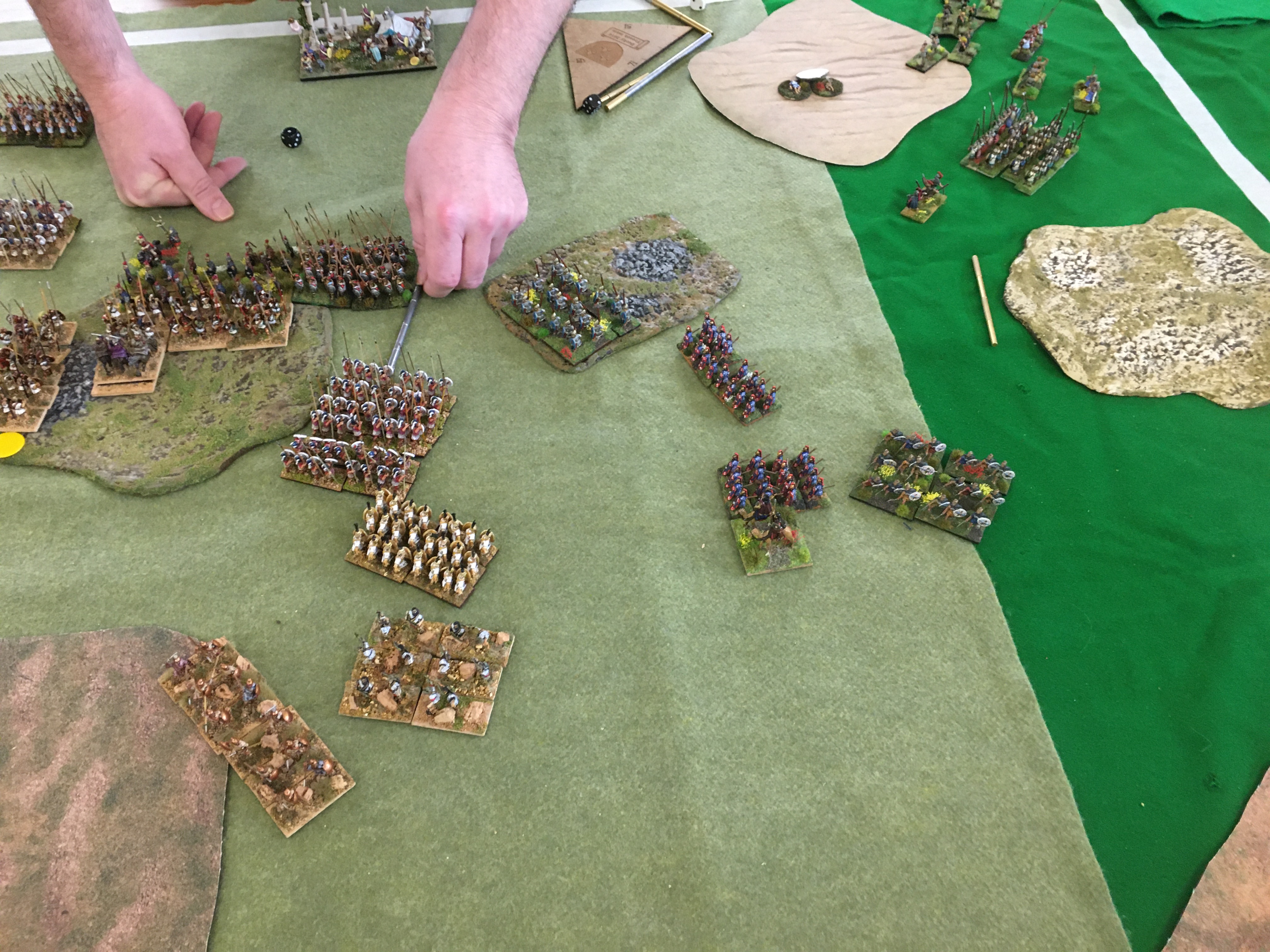 My Thorakitai have routed their MF opponents. That POA has proved decisive again. And my Thracians are bullying the outnumbered Thorakitai. Seeing a Legion and the enemy cav appearing my lancers decide that discretion may be the better part of valour. 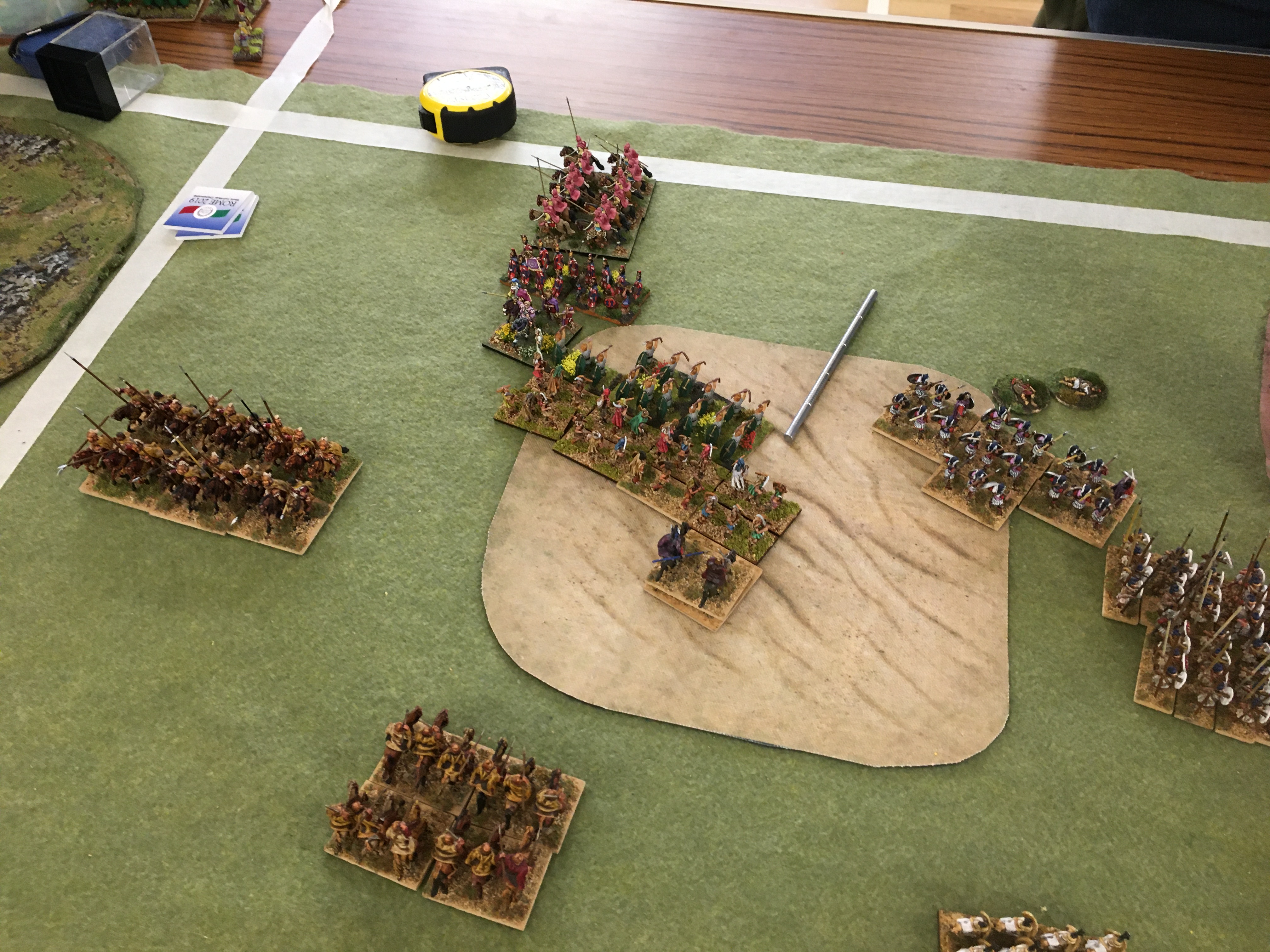 Unfortunately over in the centre the weight of numbers has told against my MF who rout through base loss. The only plus is that my 6 MF have recovered to disrupted and are well placed to counter attack. Phil’s Pike have hit mine in their pursuit move but it is not a flank charge. His Thorakitai and a Legion are also in charge reach. Not good. 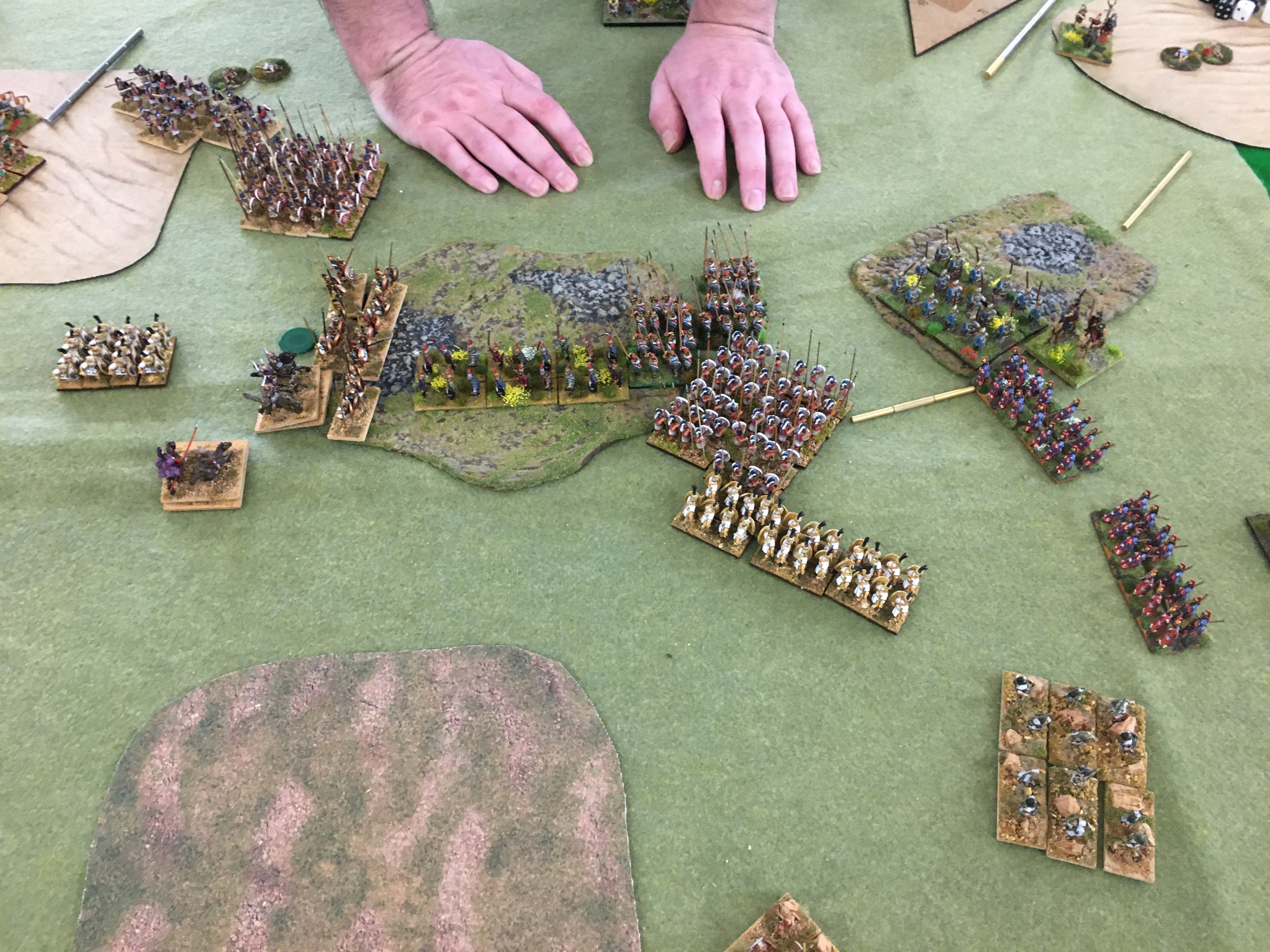 This is after impact, conforming and expansions. Phil’s Legion have disrupted and lost a base whilst my Pike are still steady due to a General and rear support. My MF are now steady but Phil has negated the threat of my flank charge by wheeling. 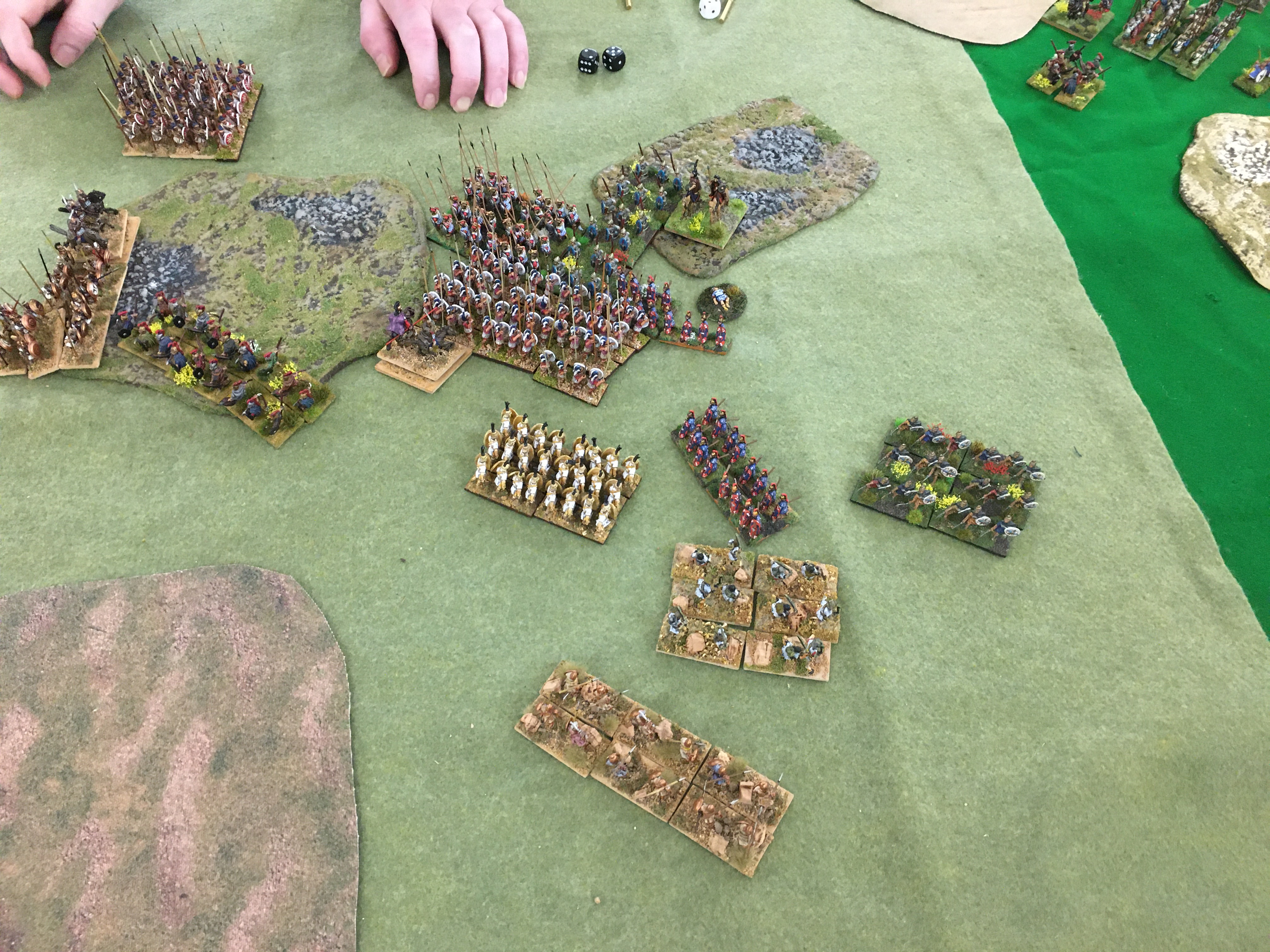 Over on my left the enemy Thorakitai have lost 2 bases and with my Thorakitai lined up to deliver a flank charge will not last long. Phil’s Legion is fighting as an overlap which will prove beneficial. 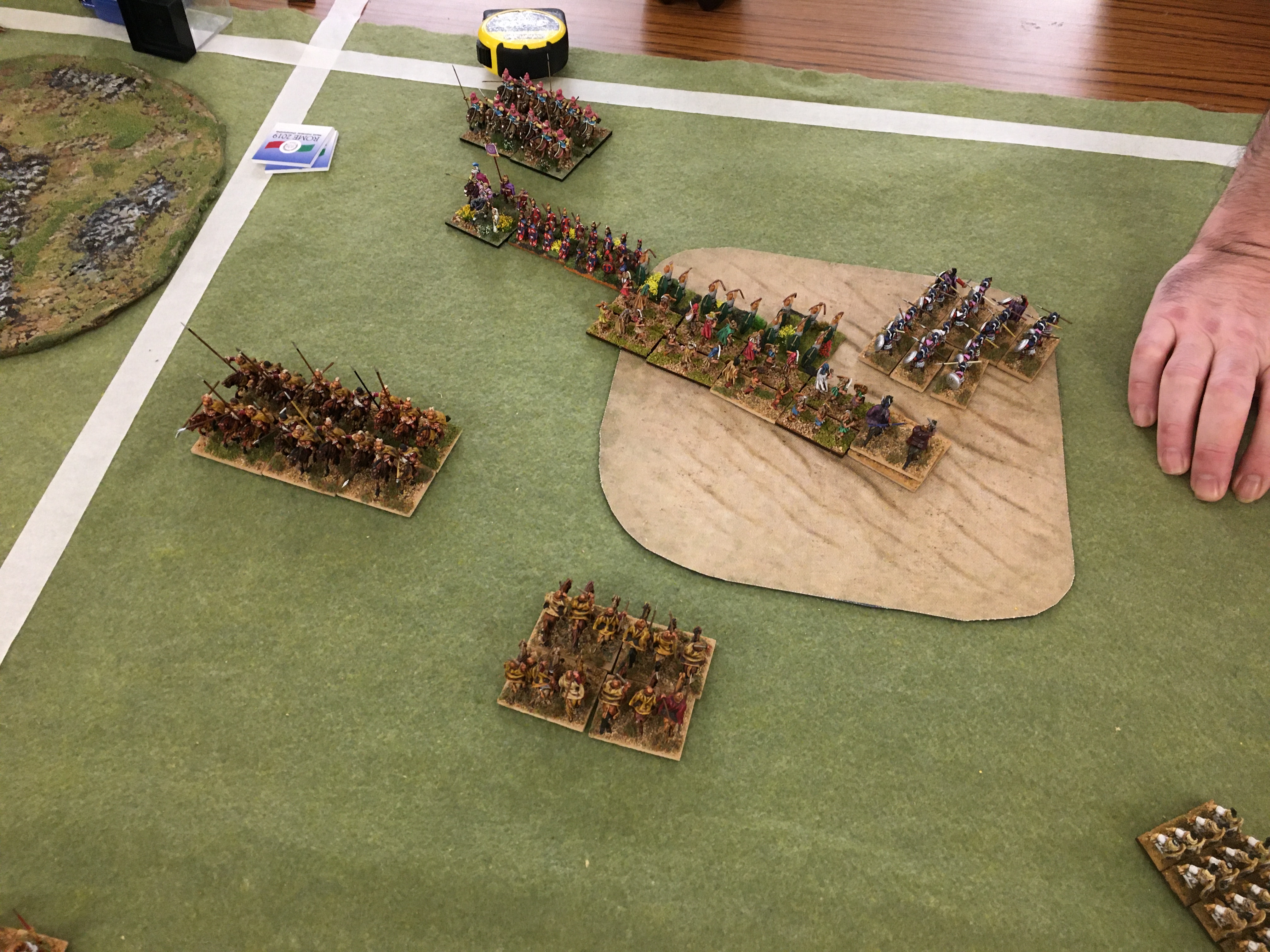 With lots of dice rolling on the right my Pike have contrived to Fragment whilst the disrupted Legion is now steady. Amazingly my average Legion are beating the Superiors who have lost a base and are fragmented. Phil’s MF are also fragged after being charged by my MF. 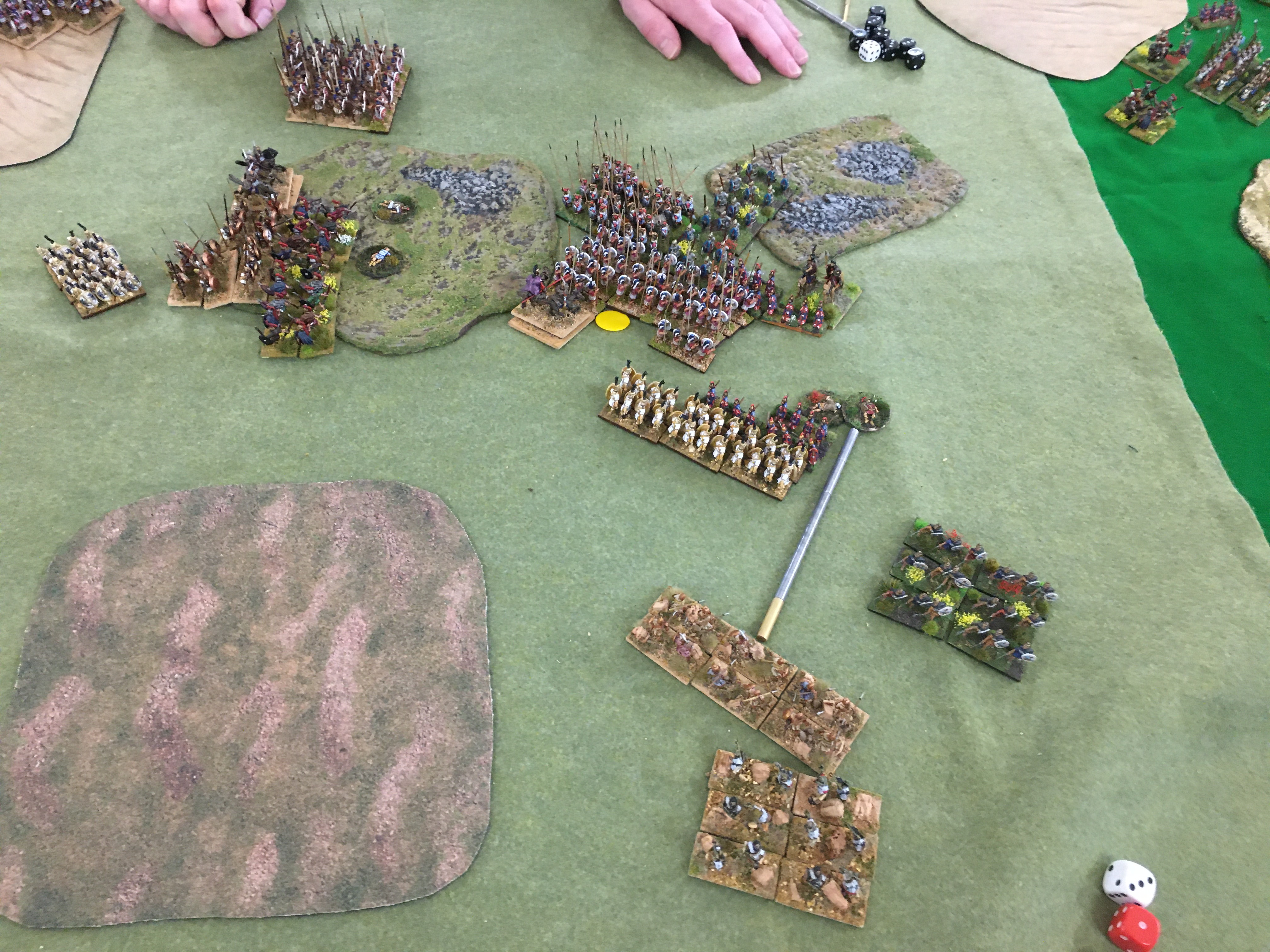 My Pike collapse soon after. 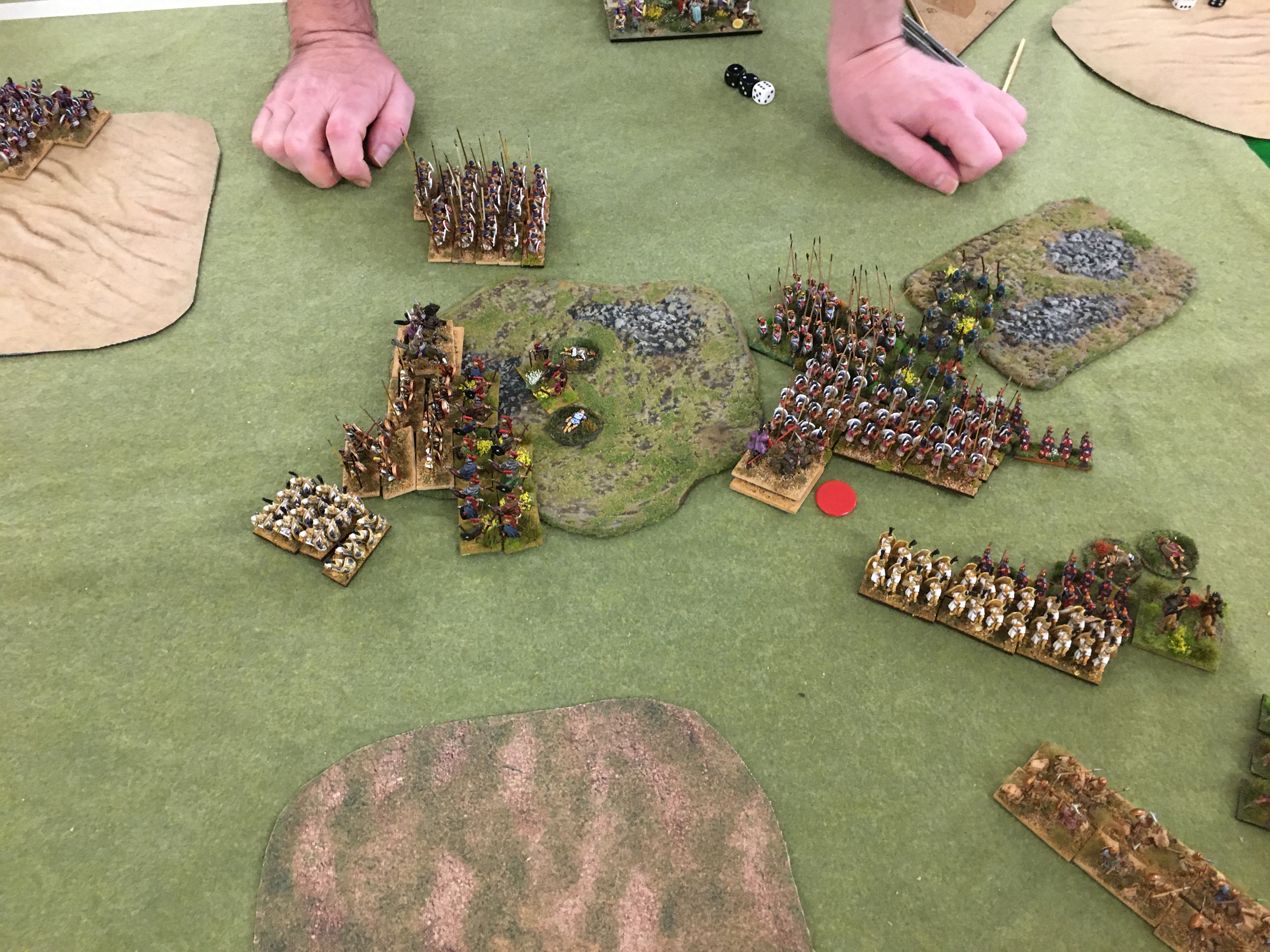 On the other side of the table the Thracian pursuit move left them in side edge contact with the Legion who have turned 90 degrees. Although the factors are even the re-rolls tell as does the extra minus for losing to HF in the open and the Thracians have let the side down and fragmented. My lancers now fancy the odds though and have turned back. They have a flank charge on the Legion which is intercepted and stopped by Phil’s cavalry. 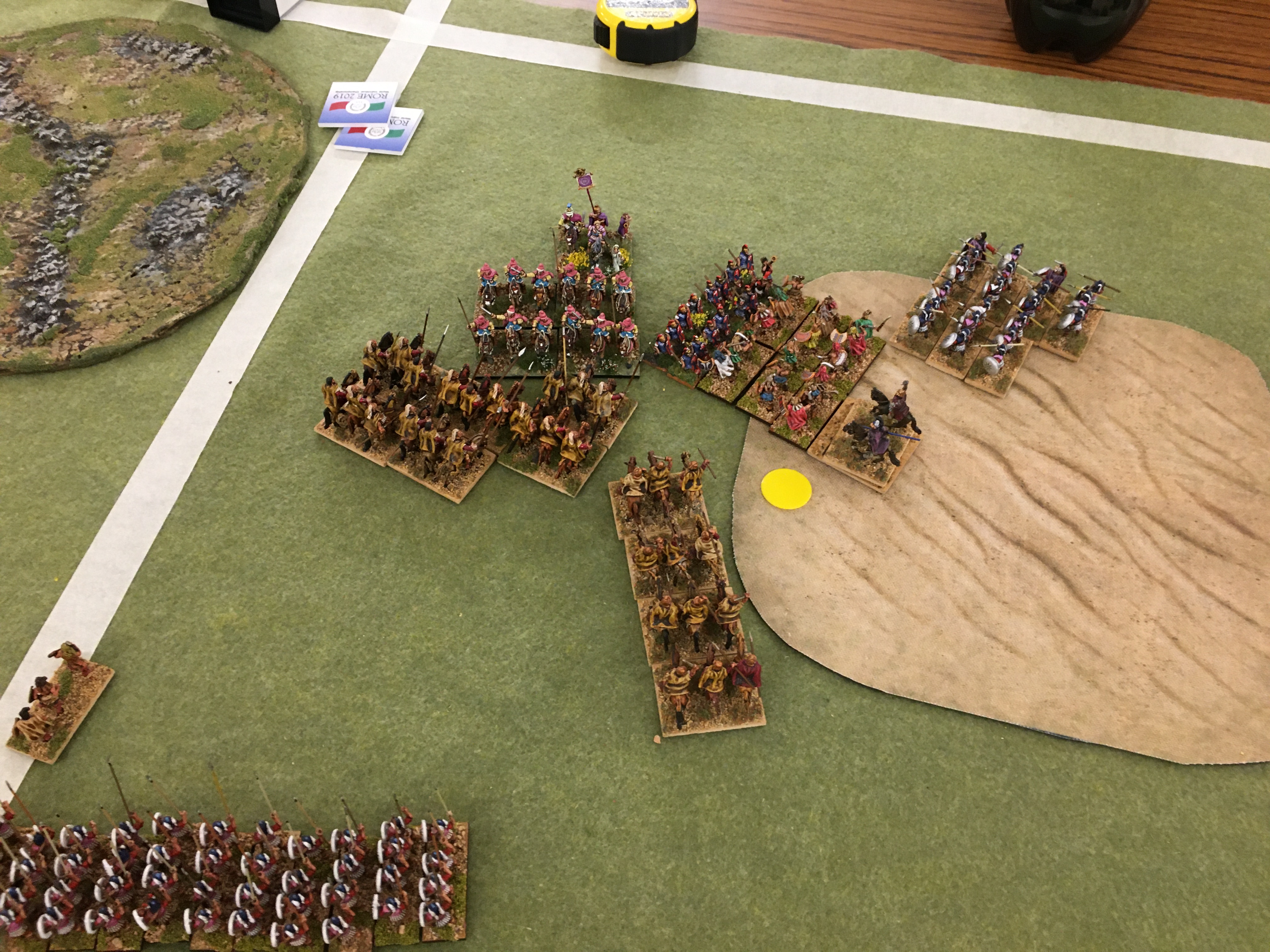 On the right my routing Pike have been removed but the pursuing Legion piles into mine who unfortunately fragment. I’m shedding points which is not good. 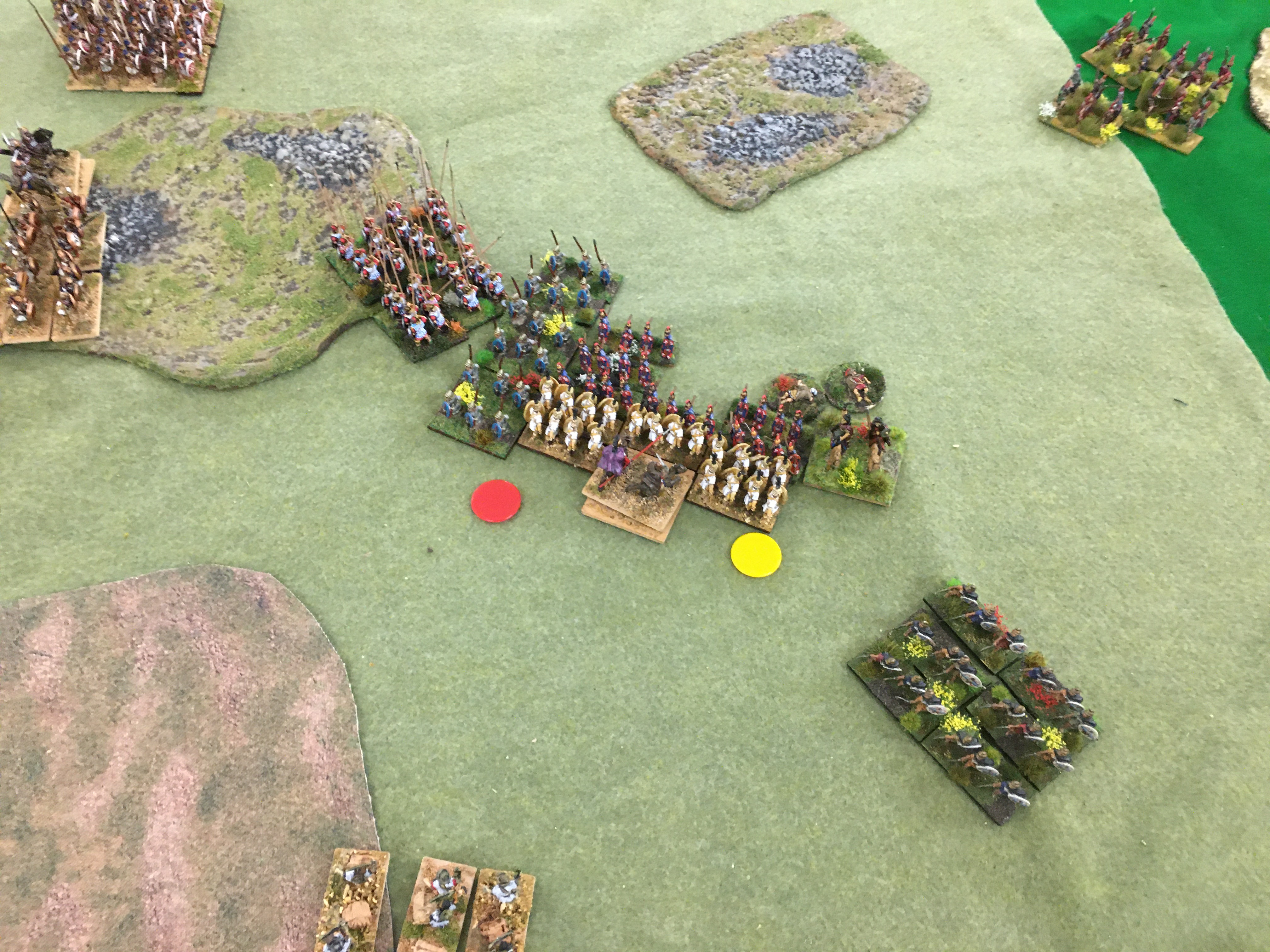 Shortly afterwards Phil’s cavalry fragmented which was enough to take down his army. I had lost 8 AP by that stage which meant that the result was 28-14 in my favour.

The decisive factor in this game was winning initiative. Otherwise it could so easily have gone the other way.

On the top table Graham’s Indians had stomped Paul’s Romans 31-8 which just allowed me to sneak into 1st place. Thanks Graham!

I was really pleased with how the army had performed after its woeful warm up games. But most pleasing was that this was an entirely Average army and one of the V3 objectives was to make Average troops more viable. So job well done I’d say.
Pete
Top

Thanks Pete, very entertaining reading all these!
Top

Phil wrote, “Nope, only 3 games. You imagined anything else.”

Quite a lot of effort to photograph a non-game. Who was the stand in for Phil?
Top

Don't know. Whoever it was he was rubbish
phil
putting the arg into argumentative
Top
Post Reply
4 posts • Page 1 of 1